Posted on November 1, 2017 by placestheygo

We’ve kept pretty busy since flying back from our east coast visit.  The weather has been perfect, with sunny skies and comfortable temperatures each day.  The day after our return to Boulder City we needed to stretch our legs a bit so we decided to hike the the nearby River Mountain Trail up to the top of Black Mountain, a hike we did while here three years ago.

The trailhead is located in a paved parking area on the north side of US-93, just .7 of a mile from the traffic light in Boulder City. 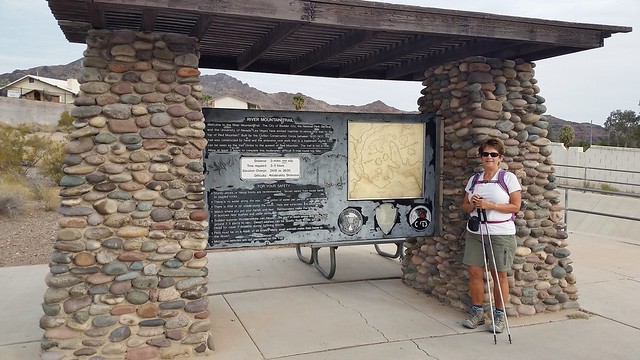 The trail goes along a drainage canal in a neighborhood for about a quarter mile before it heads across the desert toward the River Mountains. 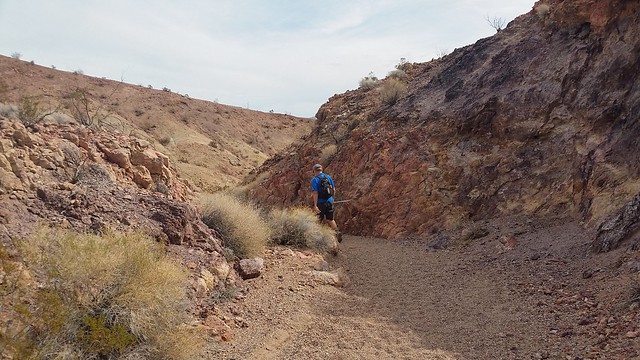 After meandering through a canyon the trail heads steeply uphill in a series of switchbacks. 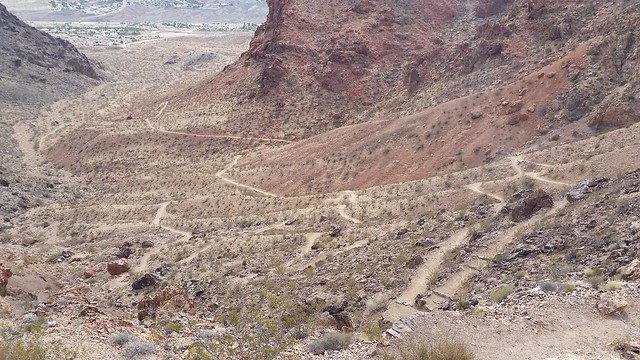 Once up on the saddle at the top of the switchbacks we turned east headed for Black Mountain.  You can turn to the west and follow a trail up to the top of nearby Red Mountain, a hike we made on our previous visit. 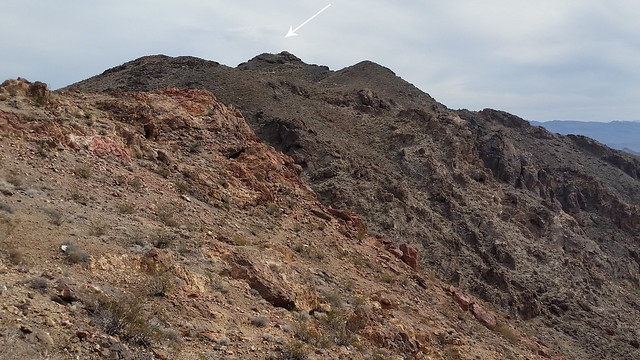 Looking up from the saddle the arrow marks our destination 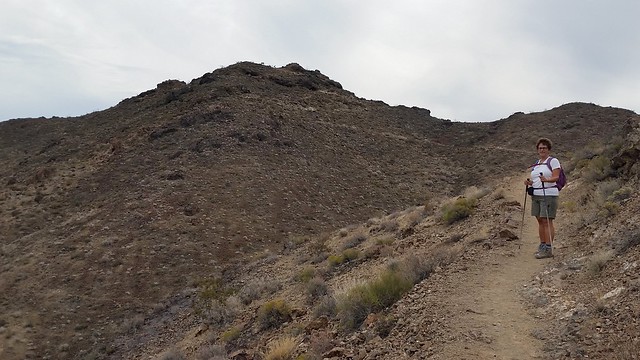 Getting closer to the peak

The trail ends at the peak, where a bench provides a good spot to take in the great views all around you. 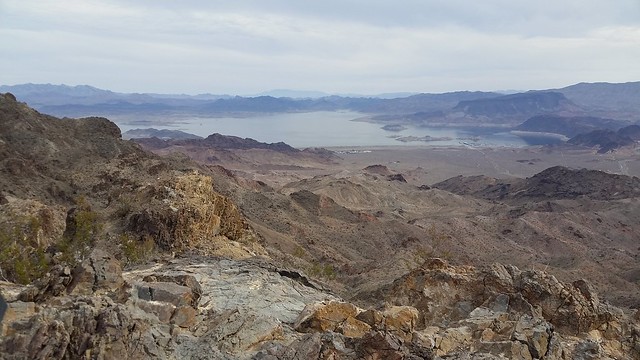 Lake Mead to the east 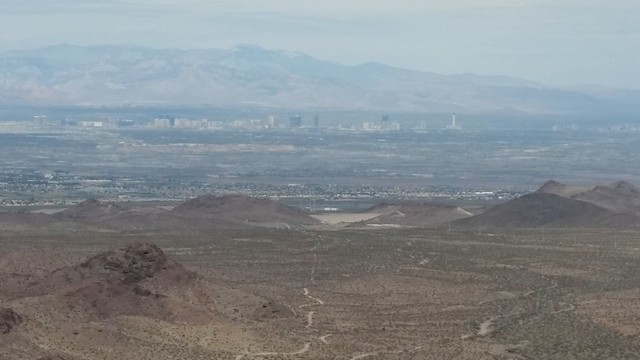 Las Vegas to the west 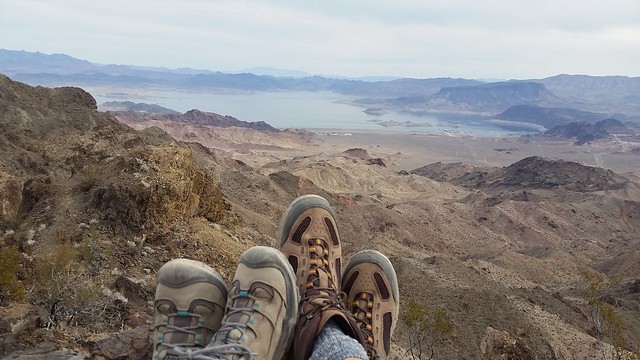 The temperatures during the next week were a bit too high for any long hikes so we returned to another location we visited a few years ago.  Steve and Joan (FOSJ) told us about two Jeep roads located about seven miles from the nearby state line along US-93 in Arizona.  Both roads follow washes for a few miles before ending.  From the end of the road it is a short hike down to the Colorado River.  We decided to go down the first road and check out the river.  Google maps designates the trail as Cranes Nest Road if you’re looking for it. 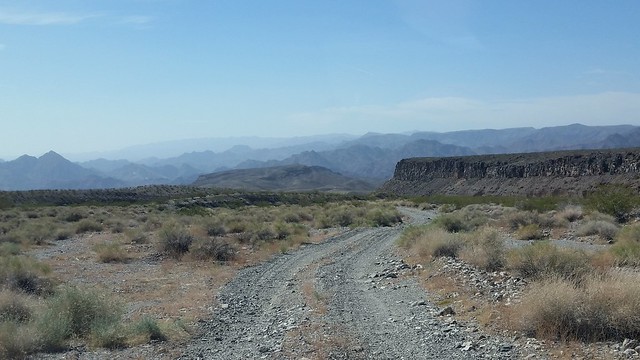 Cranes Nest Road isn’t much of a road 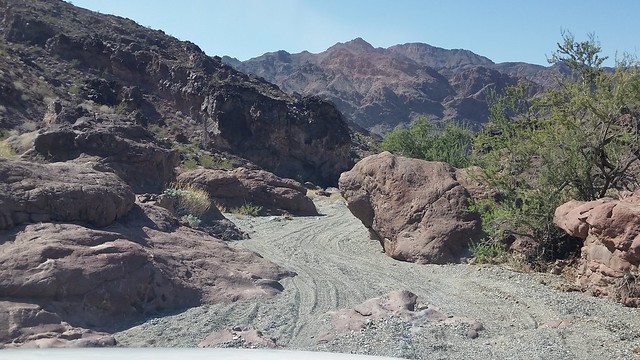 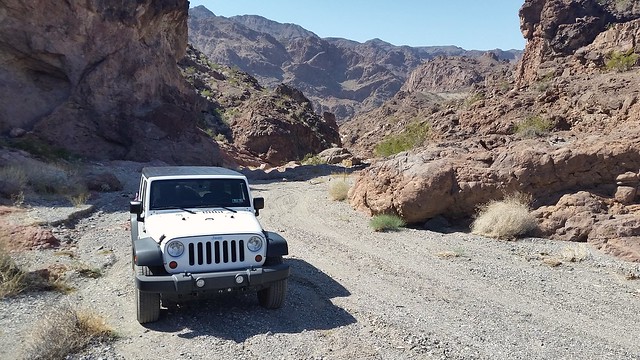 End of the road – time to hike

The hike down the wash to the river is only .7 of a mile with few obstacles. 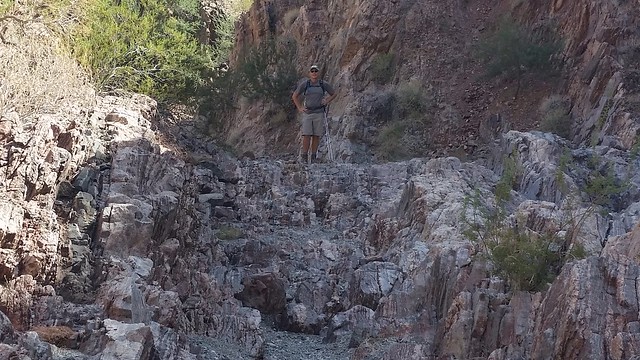 Once at the river we sat for a while enjoying lunch while watching kayakers paddling down the river. 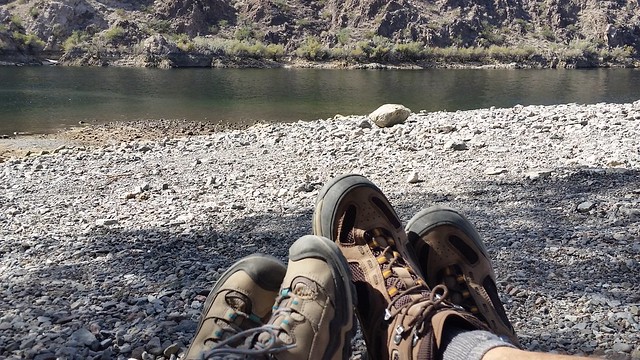 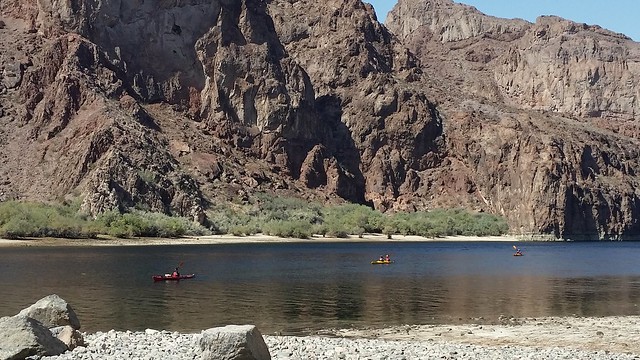 Just a short distance behind Canyon Trails RV Park is Bootleg Canyon Park, a mountain bike area filled with trails.  One section of the park is called the Discovery Trail and Rock Garden.  The trail there is an 1800′ paved path that winds its way past larger than life animal statues that include a scorpion, roadrunner, horned lizard, Mojave rattlesnake, Gila monster, and a tortoise.  One afternoon while someone was watching football the nimble hiker made her way over there to check out the statues. 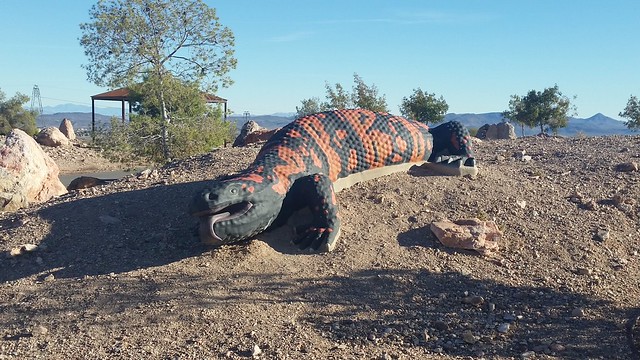 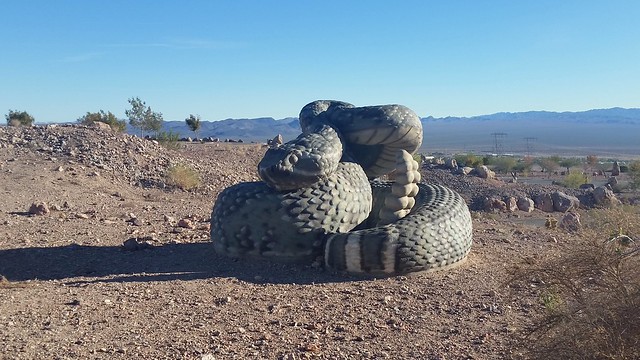 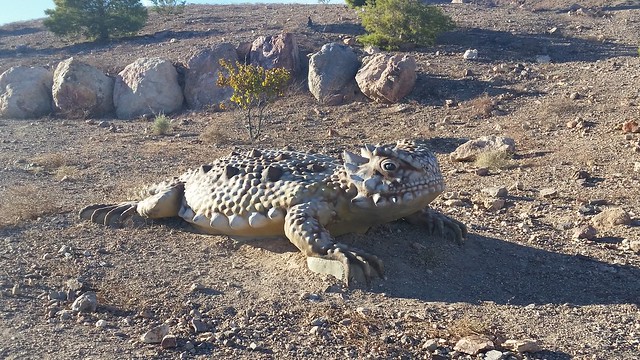 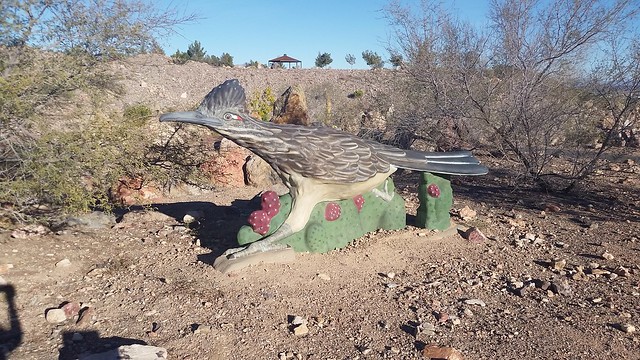 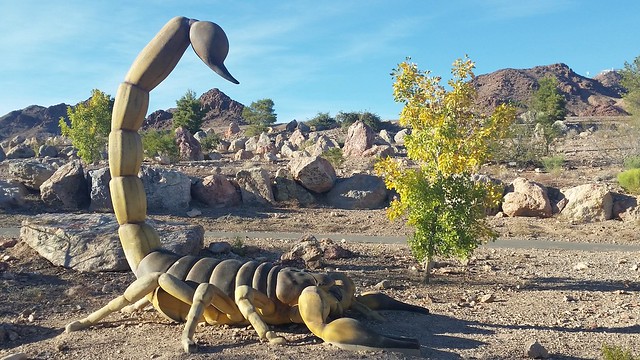 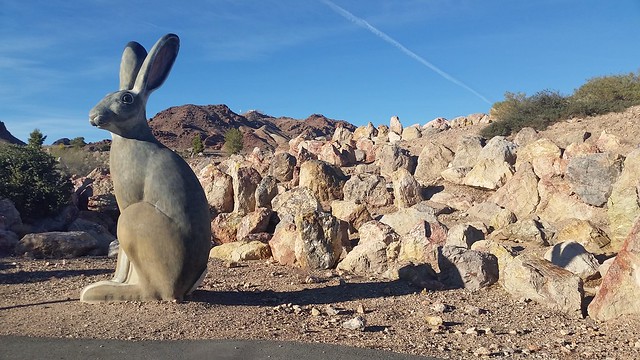 One afternoon we combined our love of scenic vistas with a treat from one of those chain coffee houses headquartered in Seattle.  We made our purchase in Boulder City and drove out to Sunset Point, a nice viewing area along Lake Mead.  Once there we set up our bag chairs and enjoyed the view. 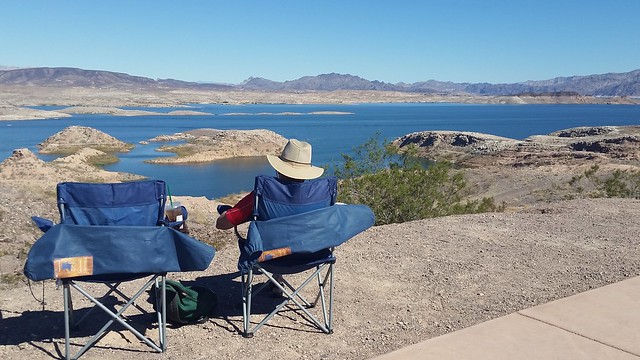 We spent another afternoon exploring the small downtown area of Boulder City.  During our walk we made a visit to the Hoover Dam Museum, located inside the historic Boulder Dam Hotel. 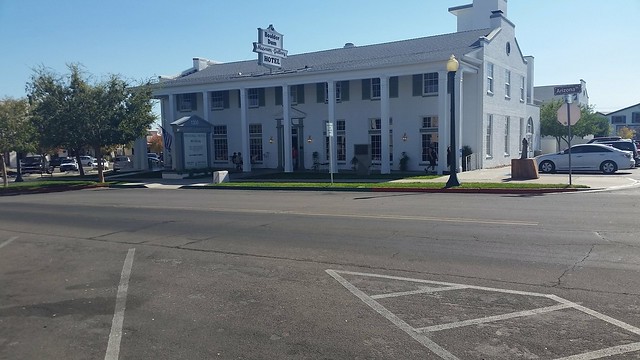 Built in 1932 the hotel was visited by many famous people during the 1930s including Will Rogers, Henry Fonda, Boris Karloff, Shirley Temple, and Howard Hughes, who recuperated at the hotel after wrecking his airplane on Lake Mead. 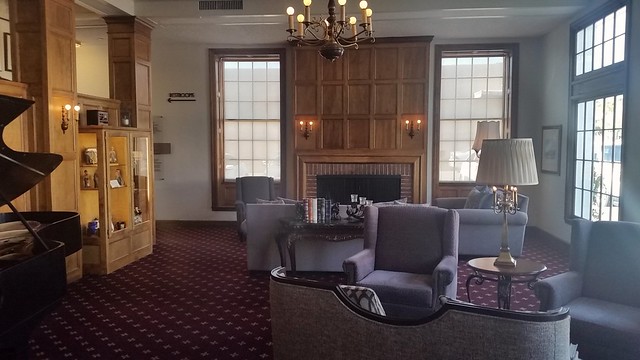 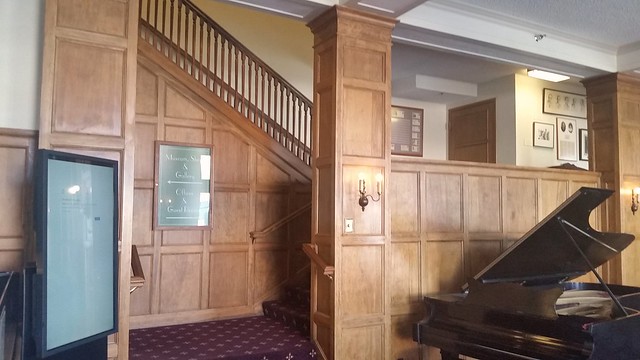 The museum is small but it does a great job in telling the story of the building of Hoover Dam. 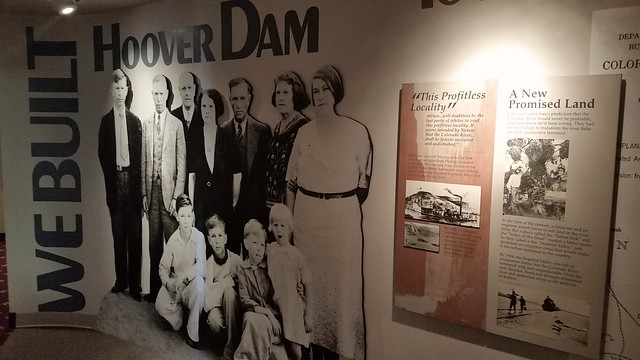 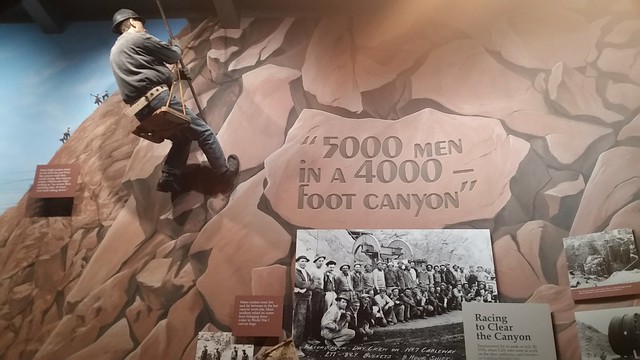 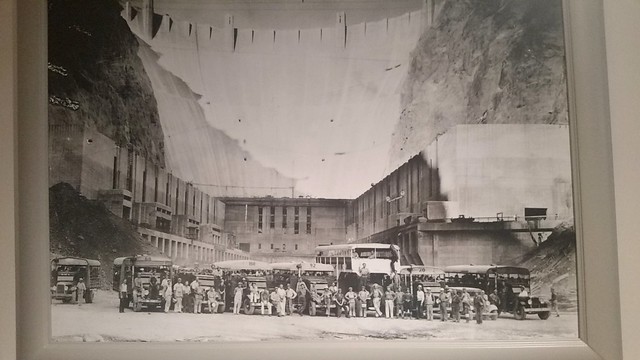 There is a nice walking tour of the downtown area which includes a series of interesting sculptures related to construction of the dam.  One sculpture in particular caught our attention. 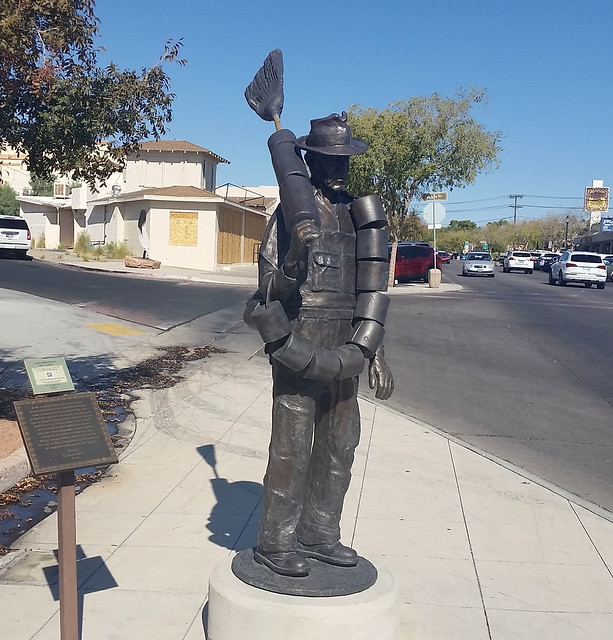 Alabam was the nickname of one of the unsung workers who helped to build the dam.  Alabam was a specialist.  His job was to clean the outhouses of the vast construction site: sweeping refuse, tossing lime into holes, and restocking the constantly diminishing supply of toilet paper.  It might not have been the most glamorous of jobs, but in certain moments during a long work day many workers probably saw it as the most important!

We’re nearing the end of our visit to Boulder City, but we have a couple more adventures to share in our next post.  More on that later . . .