Our last post ended with us on an airplane headed for Baltimore. We landed at BWI, picked up our rental car, and headed north toward Pennsylvania.  After visiting with our daughter, Jessica, and her new (last December) husband, Dan, in York, we drove about ten miles south to our former hometown of Shrewsbury where we had a reservation at a hotel.  We could have stayed with Jessica and Dan, but we had a number of medical appointments scheduled for the week and decided to just get out of their way during the work week.

On Saturday we moved up to their house and joined them and Dan’s daughter, Ella, for a family outing to a local apple orchard.  We had a great deal of fun harvesting a large crop of fruit and enjoying some locally prepared baked goods. 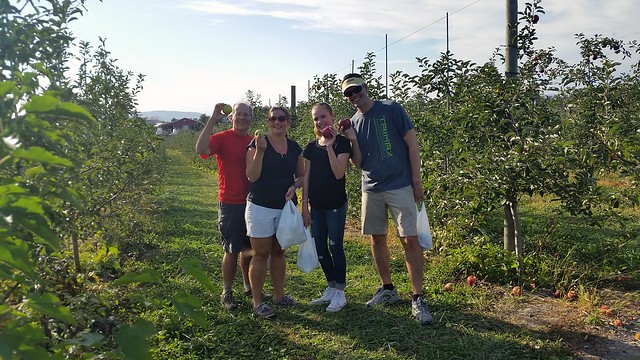 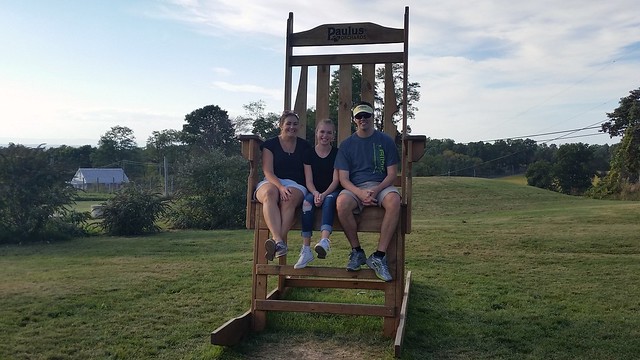 The chairs were a bit oversized here

On Tuesday we headed north to the village of Clayton, NY in the Thousand Island region of the St. Lawrence River.  The first day of our visit was a beautiful, sunny, fall afternoon so we spent some time enjoying the beauty of the river. 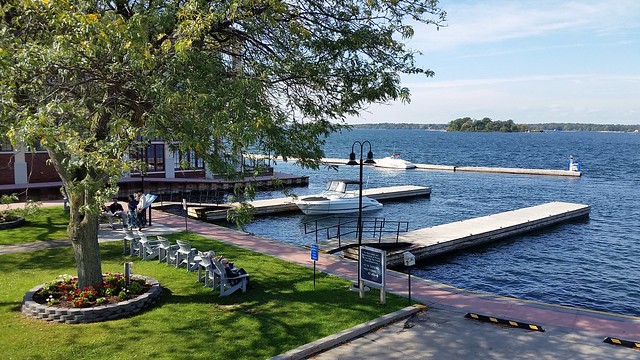 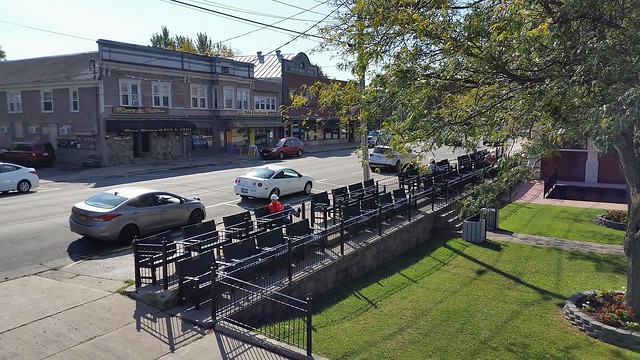 A young local sits with his friends enjoying the town dock 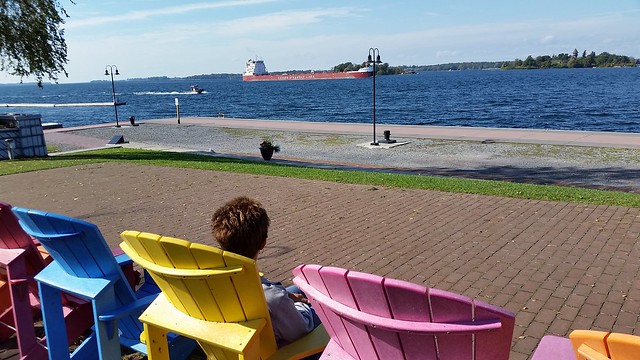 One evening we enjoyed dinner at the Wood Boat Brewery with Pam’s mother Fran, her sister Suzanne, Suzanne’s daughter (our niece) Daniela, and Daniela’s boyfriend Brandon. 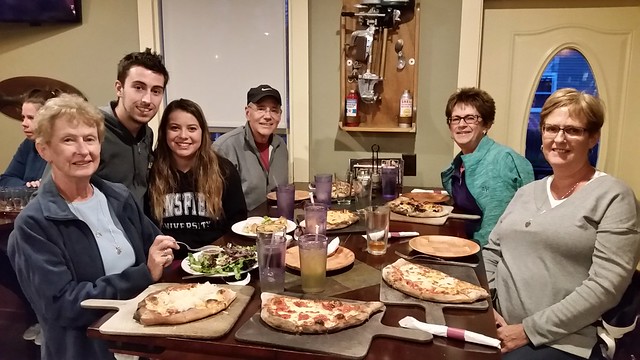 At the end of the week we returned to Jessica’s house in York for the weekend.  On Sunday morning we headed to the airport where we caught a flight to Atlanta for a visit with our son, Kevin.

Kevin spent several years as an attorney in Atlanta, the last few in the legal department of Delta Air Lines, but his real passion is commercial aviation.  So he left the legal field and spent a couple of years working his way up to a commercial pilot license.  After two years flying with a regional airline he recently returned to Delta, but this time as a pilot.  After he picked us up at Hartsfield Jackson Airport, we drove over to the other side of the runways to visit the newly improved Delta Flight Museum.  The museum is housed in two 1940s-era Delta Air Lines maintenance hangars which were used until the 1960s. 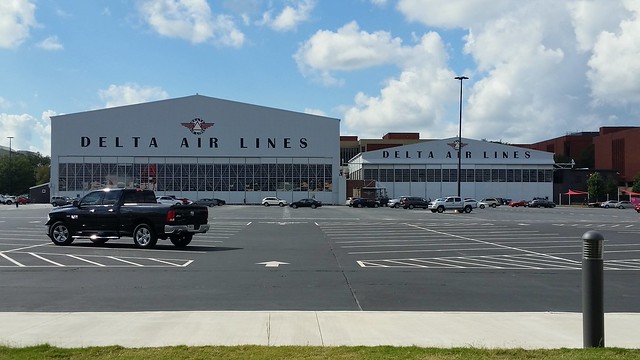 The smaller of the two hangers is dedicated to a display of early aircraft called The Prop Era.  One aircraft on display is a Huff-Daland Duster biplane replica representing the first aircraft operated by Delta’s founding company.  Kevin explained to us Delta was first a crop dusting company located in the Mississippi River delta area. 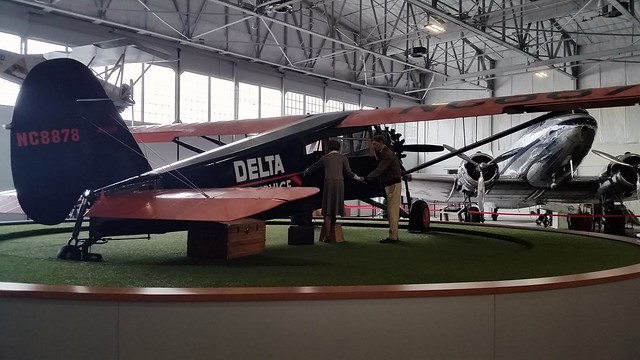 Next to the crop duster is Delta Ship 41, Delta’s first passenger-carrying DC-3 and the museum’s most prized piece.  Delta’s Ship 41 was the second of Delta’s first five DC-3 airplanes to be delivered.  The first, nicknamed “City of Atlanta“, was used for crew training only, so in December of 1940, Ship 41 became the first Delta DC-3 to operate passenger flights. 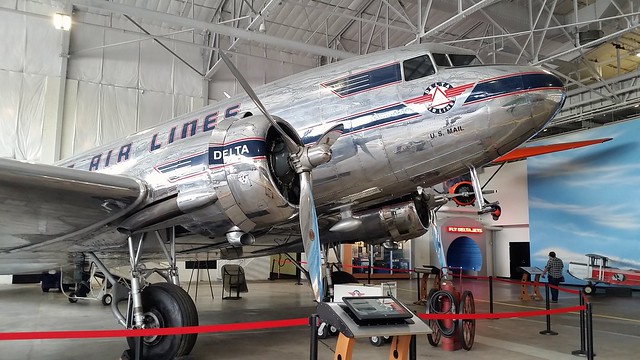 The larger hanger houses a display called The Jet Era.  The main attraction here is Delta Ship 102, The Spirit of Delta.  Acquired in 1982, the aircraft was the company’s first Boeing 767-200. It was paid for “by voluntary contributions from employees, retirees and Delta’s community partners.”  The effort, called Project 767, was spearheaded by three Delta flight attendants to show the employees’ appreciation to Delta for “solid management and strong leadership during the first years following airline deregulation.” 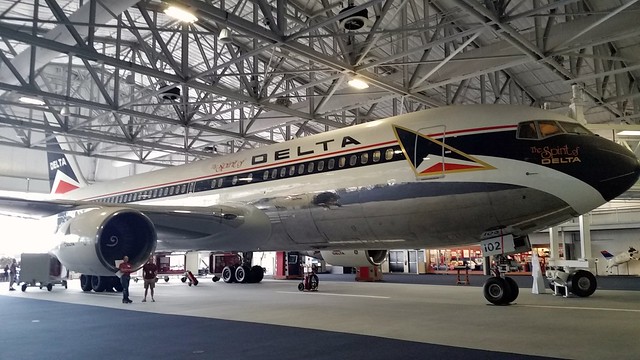 Note John and Kevin standing in front of the engine 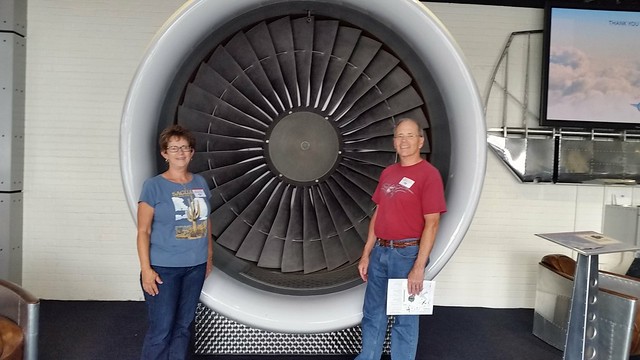 Turbojet engine in the museum entrance

There are three planes on display outside the building.  One is a McDonnell Douglas DC-9.  After McDonnell Douglas was purchased by Boeing in 1997 the aircraft was re-named a Boeing 717.   Kevin flies the 717 so it was fun having him take us around it, pointing out the different features.  Too bad you can’t go inside. 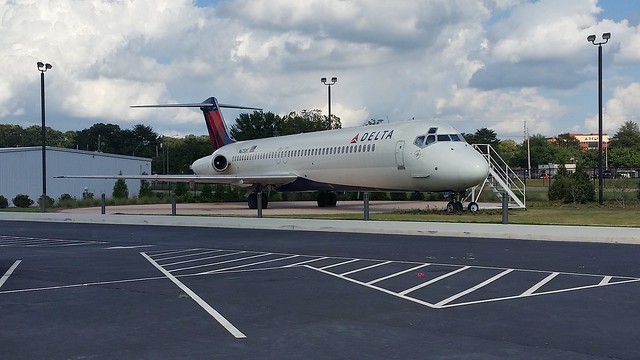 Dwarfing the 717 is a plane sitting next to it, Delta Ship 6301.  Retired on September 9, 2015 after serving since December of 1989 with Northwest Airlines, this aircraft was the first Boeing 747-400 ever built.  It logged more than 61 million miles of flight over its lifetime. 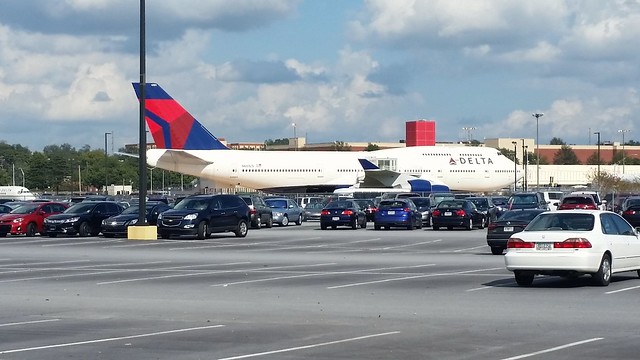 Visitors enter the 747-400 via stairs or an elevator, proceed through the intact first class cabin, and through the economy section, which was turned into an exhibit space. 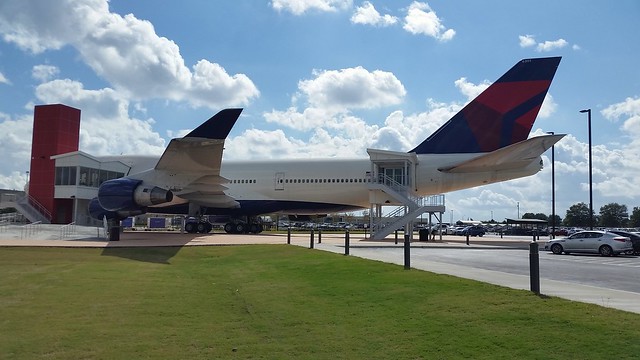 We were able to go up into the first class upper deck and look into the cockpit.  The upper deck was renovated in 2011 when the conventional seating was removed and individual seating areas were installed.  A docent located in that area of the plane wasn’t sure of the year of the renovation but he was impressed when Kevin knew it, as he had worked on the contract during his time in the Delta legal department. 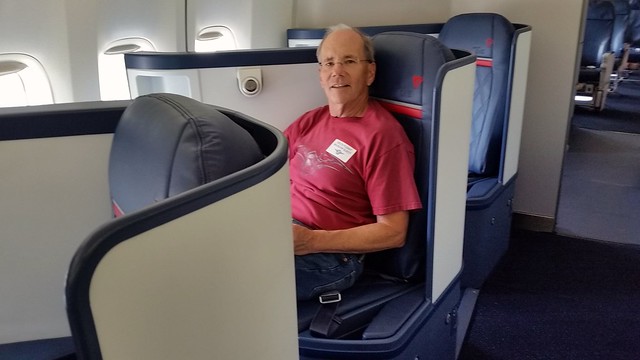 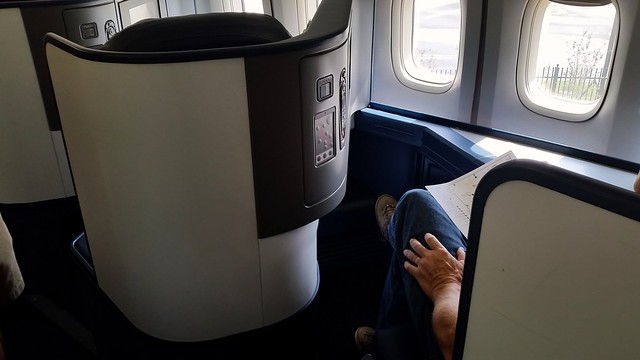 The docent told us about some movie scenes shot in the museum.  One of them was an opening scene of the newly release American Made.  The scene, with Tom Cruise piloting an airliner, was shot in a 737 simulator housed in the museum.  We were curious about the scene so off to the movies we went.  Pam and Kevin stopped at the concession stand to pick up what they described as a “small snack.”  The theater charges an arm and a leg for a “small snack” and the price only increases a bit for the large sizes.  But the size of the popcorn and drink they returned with were a bit excessive! 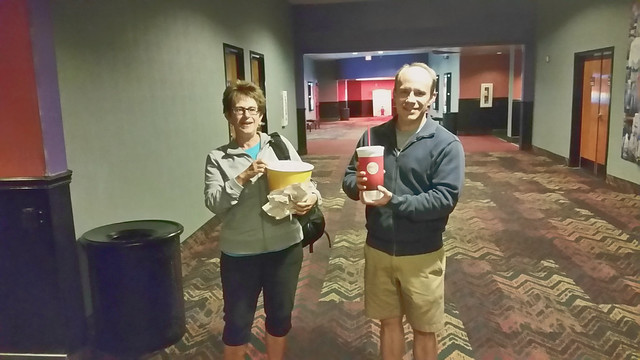 The opening scene shot in the museum was very, very brief  but we did find the movie to be entertaining.

After two weeks living out of  suitcases, we have now returned to the motorhome outside of Las Vegas.  We’ll stay here in Boulder City for the next couple of weeks before beginning a slow move to San Diego for December.  There are some great hikes in this area so we have plenty to keep us busy while we are here.