Posted on September 28, 2017 by placestheygo

Lone Pine is a little town (pop. 2,035) sitting in the Owens Valley just east of the Sierra Nevada Mountain Range. 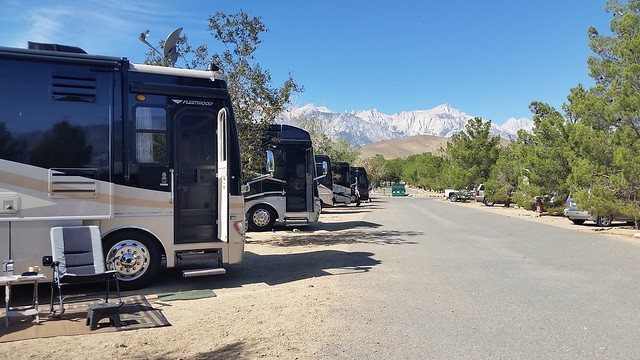 Looking west from our site in Boulder Creek RV Park 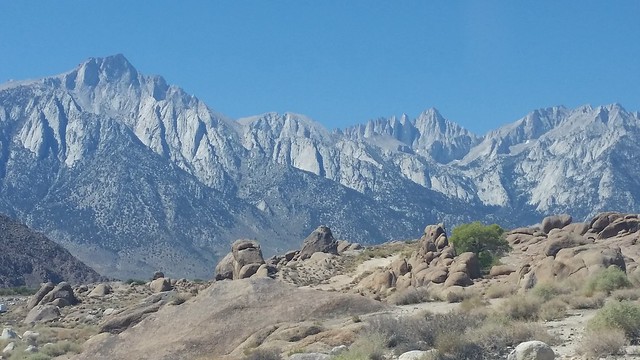 Between Lone Pine and the Sierra’s is a rocky area known as the Alabama Hills.  The Alabama Hills were named for the Confederate warship CSS Alabama by prospectors in the area sympathetic to Confederacy.  The Alabama Hills are a popular filming location for television and movie productions, especially Westerns set in an archetypical “rugged” environment.  Since the early 1920s, 150 movies and about a dozen television shows have been filmed here.  We spent a few hours locating some of the many arches located in the hills. 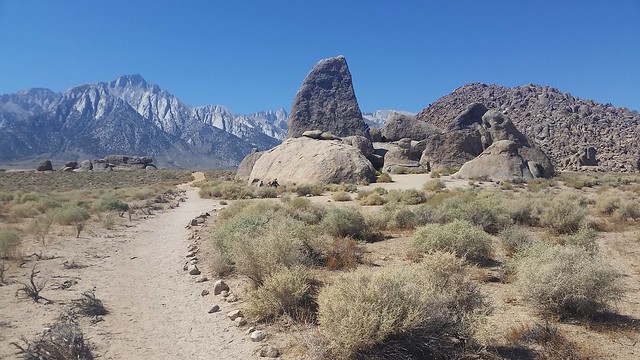 Two arches are located near the formation called the Shark Fin. 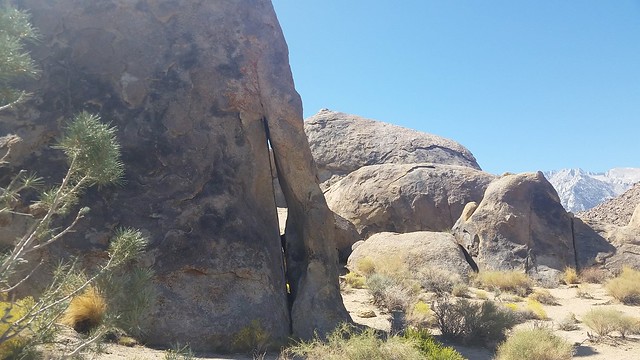 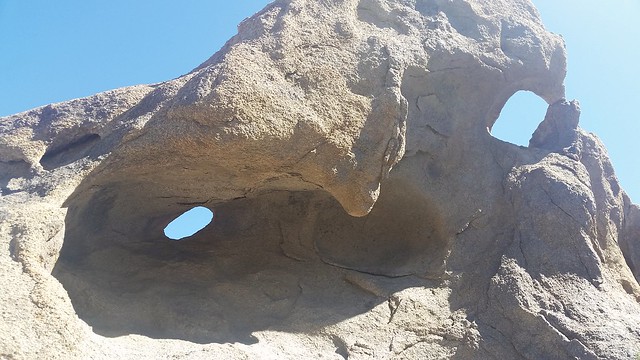 The Shark Fin is a popular spot for rock climbers. 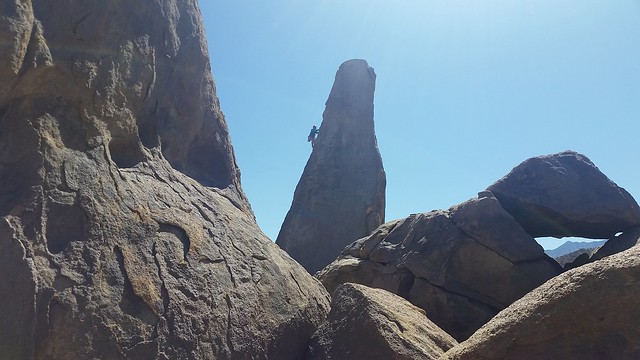 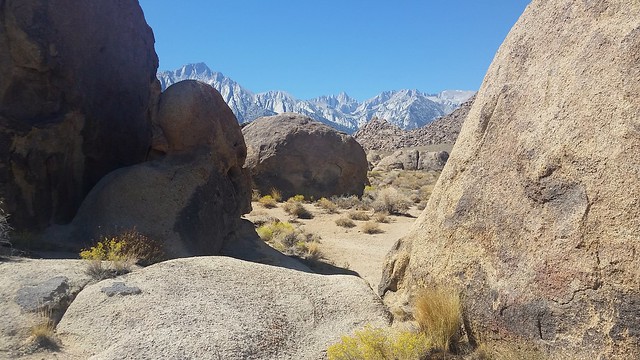 Lone Pine Peak on the left and Mt. Whitney in the center

We left the Shark Fin and drove deeper into the hills to check out some more arches. 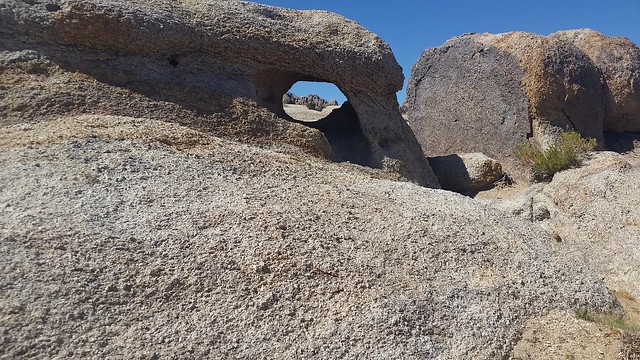 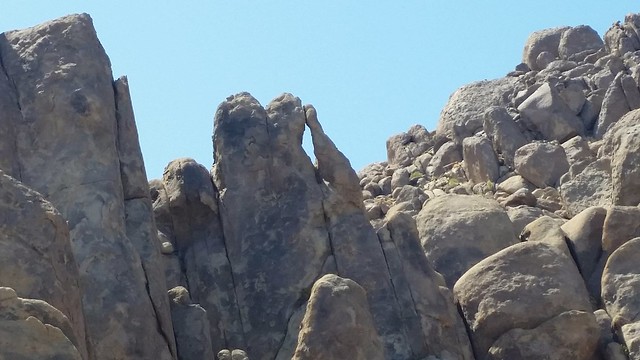 As we searched in one area we passed a formation that looked very much like a foot with four toes sticking out of the sand. 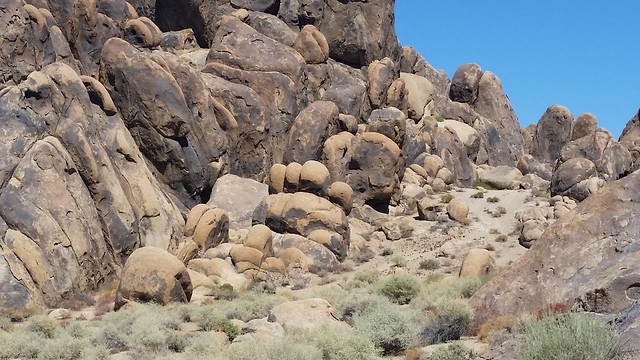 We call this the “Four Toes Formation” 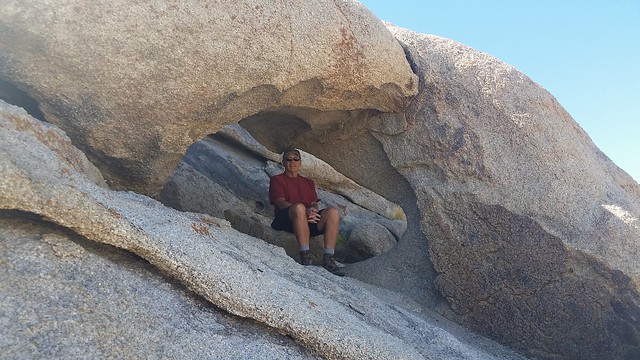 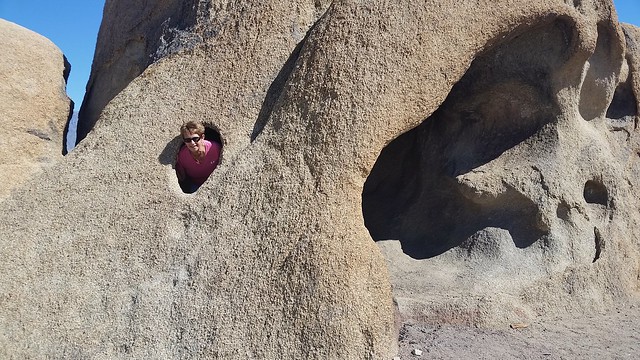 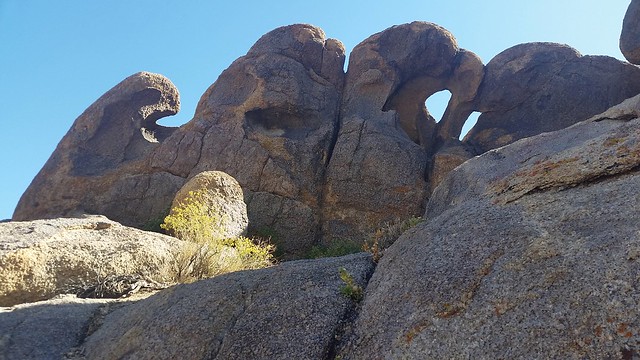 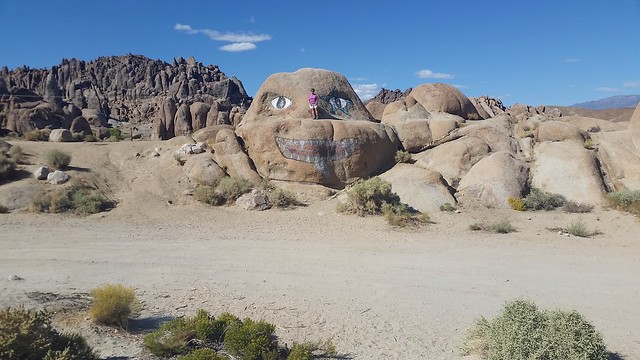 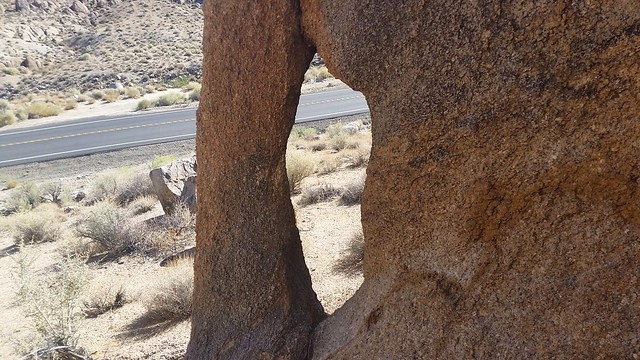 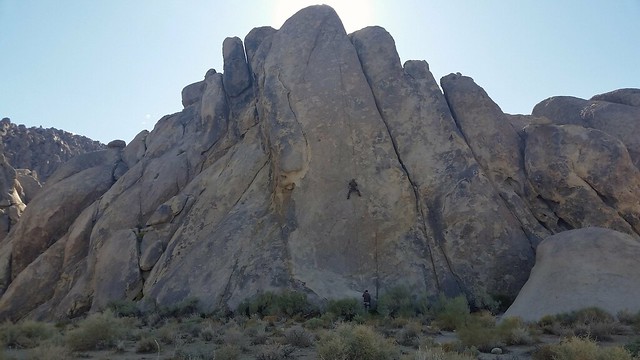 In the southern section of the Alabama Hills sits a marker identifying the location of filming for the movie Gunga Din. 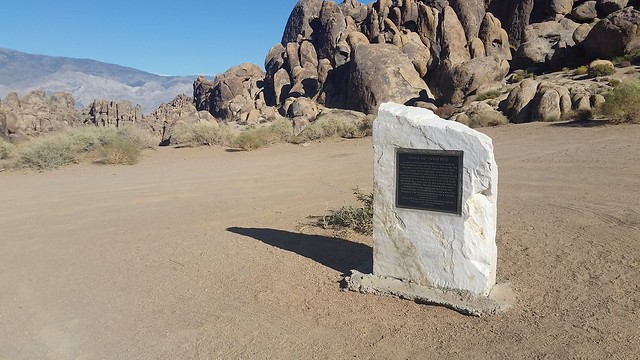 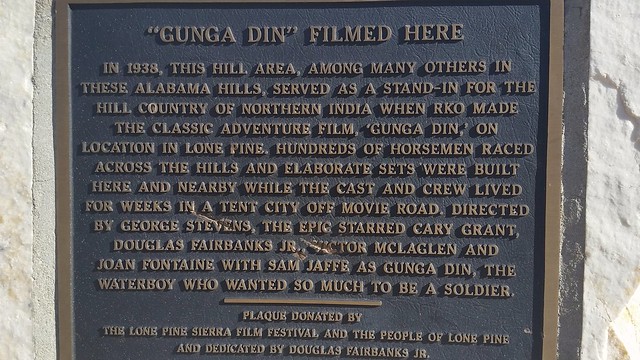 Two nice arches sit up in the rocks just behind the marker. 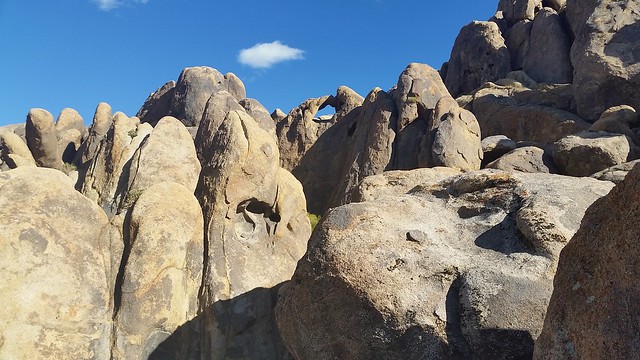 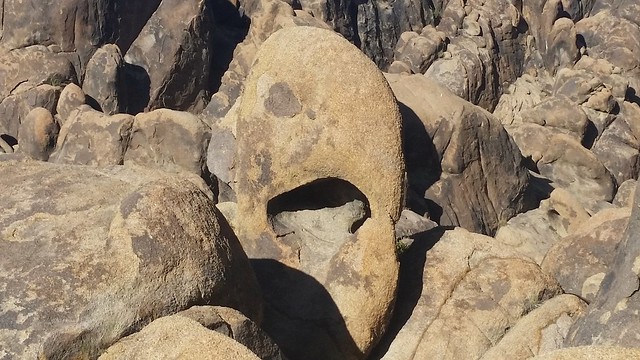 Most of the arches pictured above are small and very difficult to spot.  We were aided by the book Arches of the Alabama Hills.  Many are so hidden we needed to use GPS coordinates to locate them. 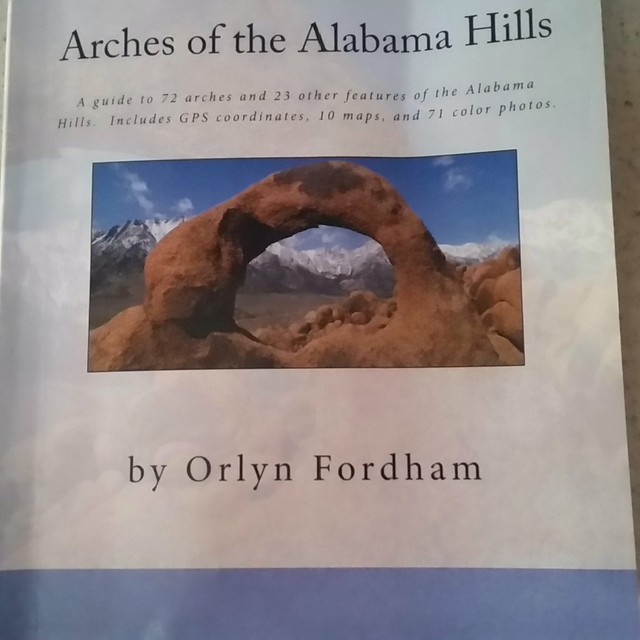 One afternoon we drove north 20 miles up US 395 to the little town of Independence for a visit to the Eastern California Museum.  Founded in 1928, the museum has been operated by the County of Inyo since 1968.  The museum has a nice collection of artifacts and photos tracing the history of the Owens Valley. 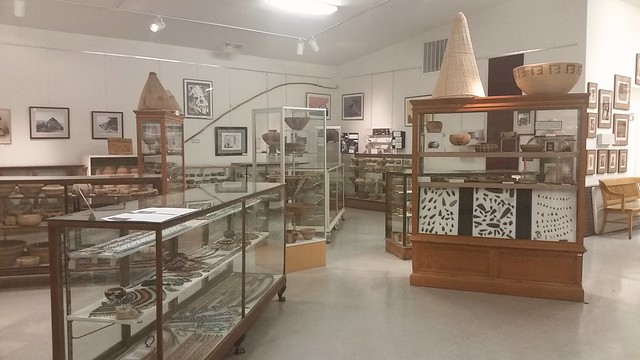 One of the main exhibits is on the WWII, Manzanar Japanese Internment Camp, located between Independence and Lone Pine. 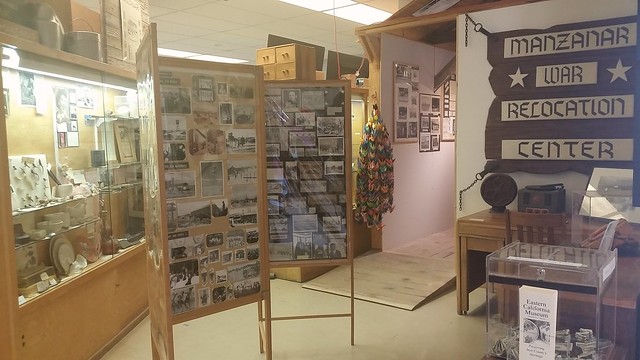 One of the main exhibits deals with the life of a local climbing legend, Norman Clyde (1885-1972).  Clyde was a mountaineer, mountain guide, freelance writer, nature photographer, and self trained naturalist.  He is well known for achieving over 130 first ascents, many in the Sierra Nevada Range and Glacier National Park. 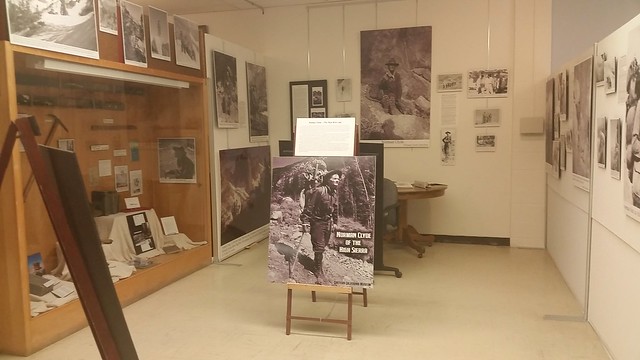 Behind the museum building they have preserved many of the buildings from the earlier years of Independence. 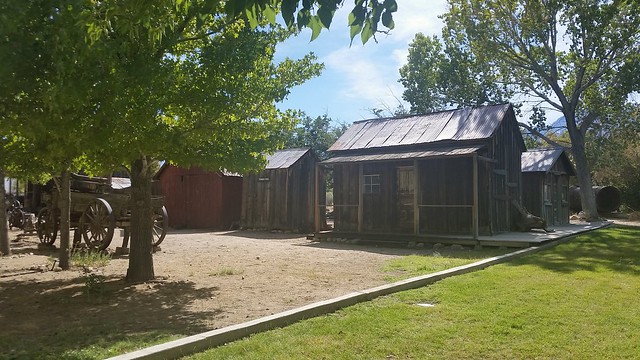 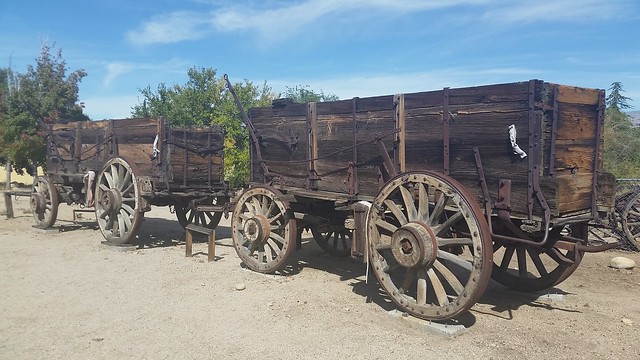 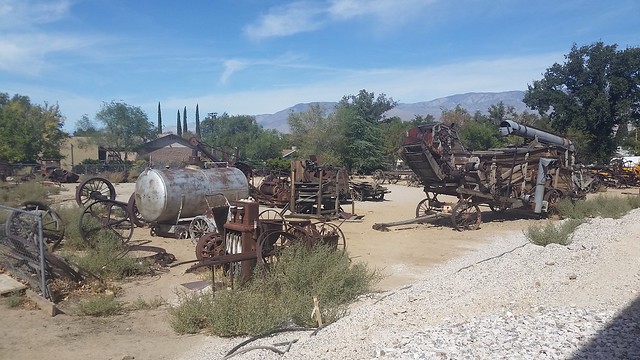 Just outside the museum is a garden that displays many of the plants found in the area. 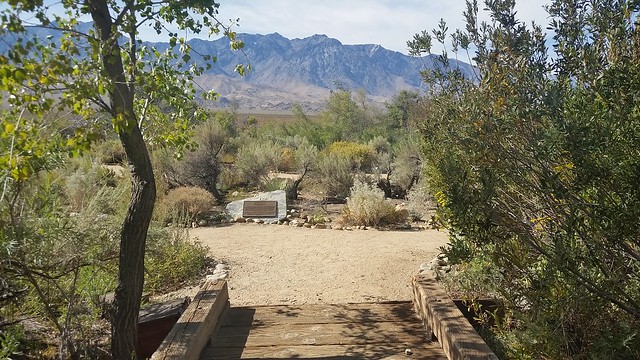 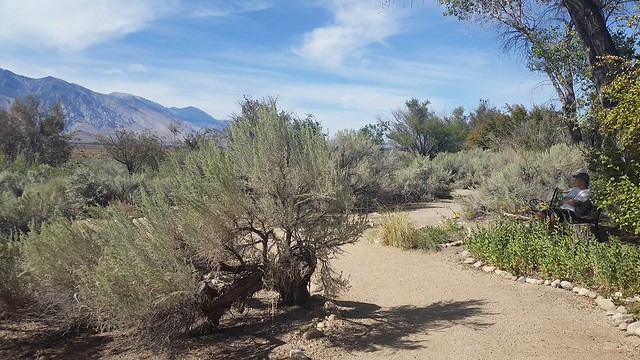 A young botanist surveys the garden

We have one more hiking adventure planned before we leave Lone Pine.  More on that later . . .

36 Responses to Alabama Hills and the Eastern California Museum