Posted on September 17, 2017 by placestheygo

We left Susanville, CA on Monday and headed south on US 395 for a 120 mile drive to Carson City, NV.  We’ve spend a great deal of time in pine forests the past few months, but soon after leaving Susanville the trees disappeared and the terrain changed dramatically. 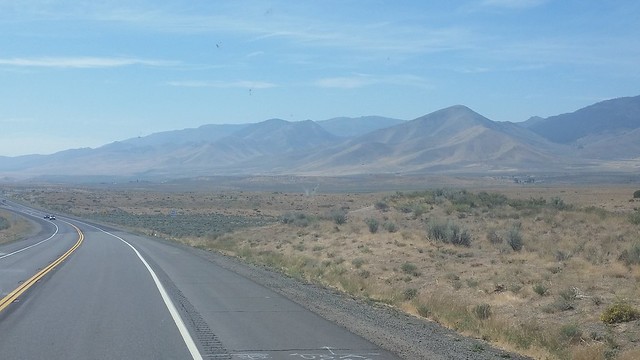 Not long after entering Nevada we cruised through the city of Reno. 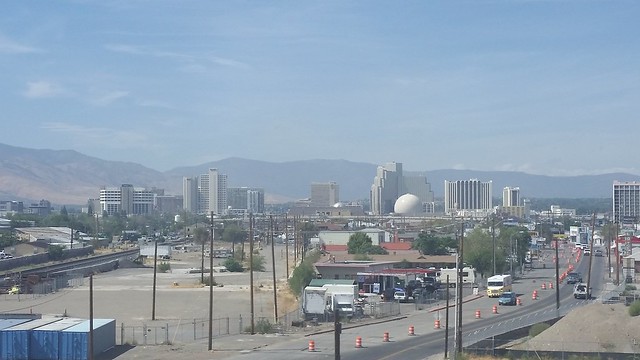 Near Reno US 395 becomes I-580 as it heads south past Reno and on to Carson City. 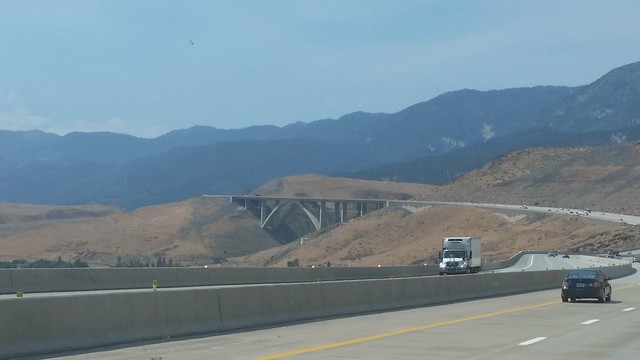 We arrived at our destination, Silver City RV Park, early in the afternoon and quickly set up the motorhome.  We stayed in this park two years ago so we’re familiar with the area and headed out to a nearby grocery store and one of those chain coffee shops from Seattle.

The next morning we headed west to the eastern side of Lake Tahoe for a little hiking.  The nimble hiker did some research and found a nice short hike to a little cove along the lake called Skunk Harbor.  We took US 50 up into the mountains and turned north on NV 28.  About two miles to the north we found an iron pipe gate on the west side of the highway that is the starting point for this hike.   We parked in a nearby turnout along the highway and headed down the narrow dirt road that serves as the trail.  As we descended, Lake Tahoe came into view. 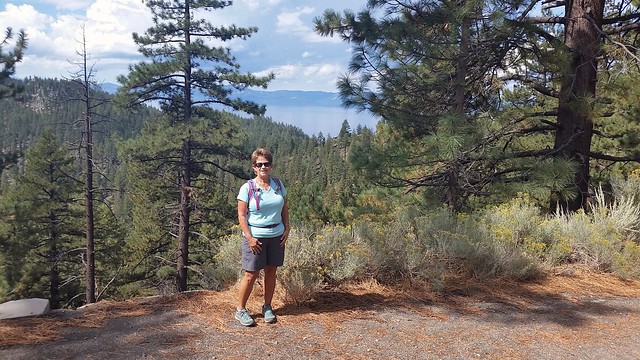 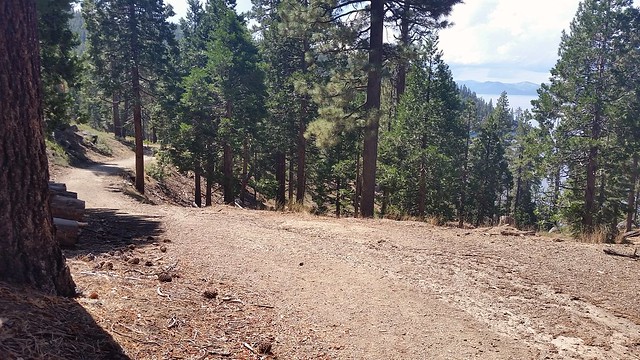 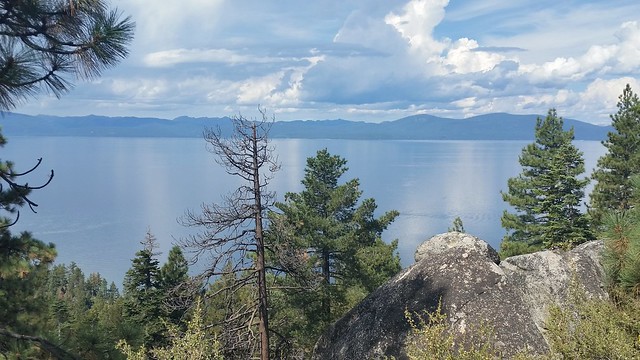 We read somewhere that the hike was 1.5 miles roundtrip.  Turns out that it is 1.5 miles down to the lake with a drop of 560 feet, leaving another 1.5 miles of “up” back to the highway.  At the bottom of the road we came to two stone buildings sitting along the shore.  The buildings are the remains of a summer retreat built in 1923.  It was built by George Newhall as a wedding gift, for his wife Caroline.  George’s wealth was derived from his father’s fortune earned as an auctioneer during the gold rush and subsequent investment in railroads.  The site and buildings were used as a second home or more often a party house by the San Francisco wealthy during the roaring twenties. It was purchased in 1937 by George Whittell, another Gold Rush millionaire. He lived in it temporarily while his main lodge was under construction three miles to the north.  After that he used it as a retreat and guest house for his friends.  Today the buildings are abandoned and maintained by the US Forest Service. 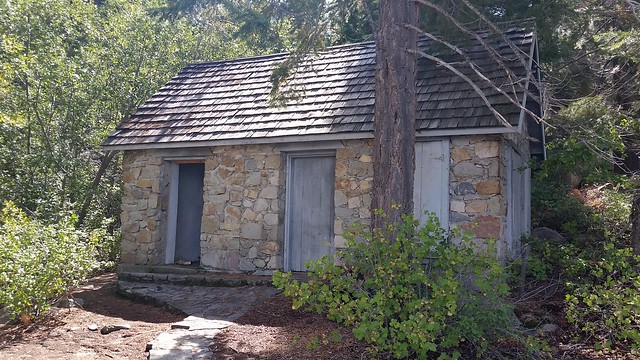 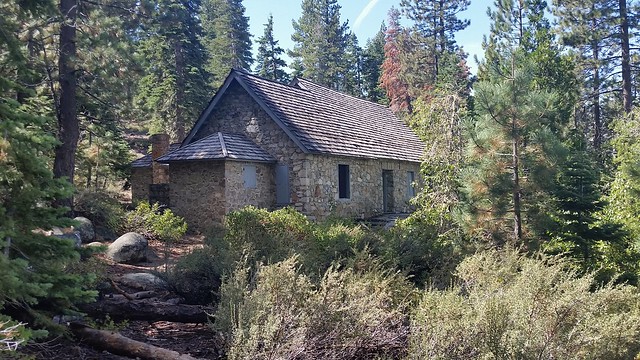 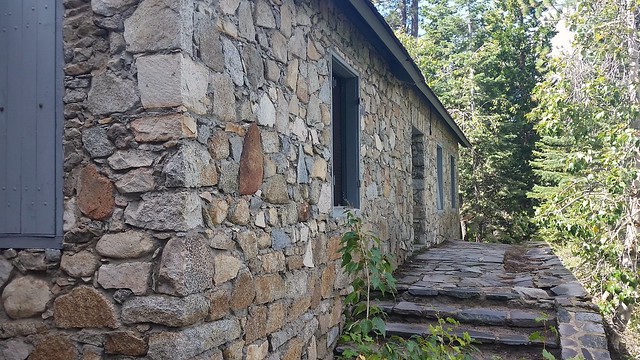 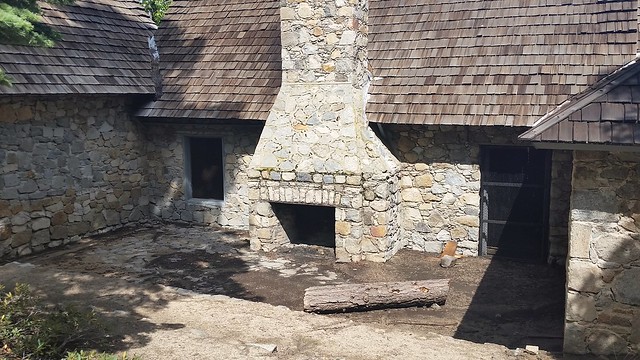 Back of the Main House 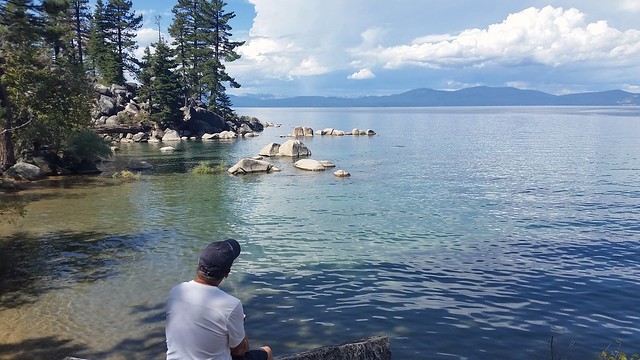 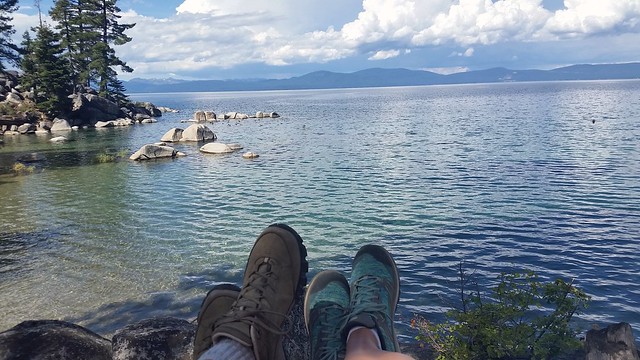 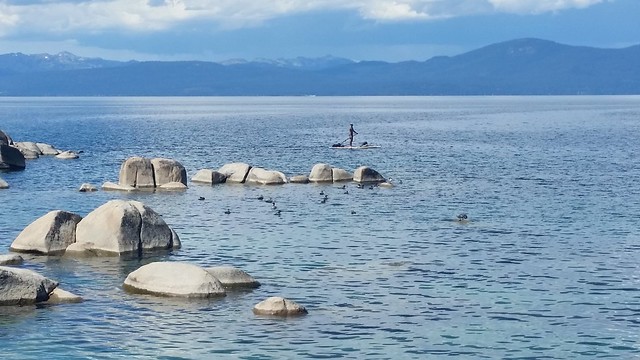 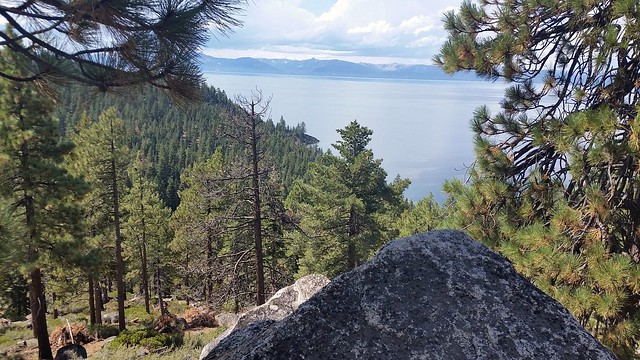 Looking back on the return hike

The next day we drove about 15 miles north on I-580 for a short hike in Washoe Lake State Park.  The park sits on the southeast shore of the shallow (max. 12′) Washoe Lake.  In times of severe drought the lake has been known to dry up, but with the wet conditions of the past year it was completely full. 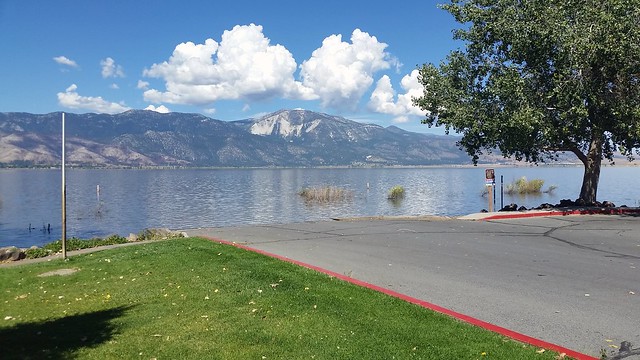 Looking west at the boat ramp

The day use section of the small park was empty as we drove in.  We parked the Jeep and headed east to the trailhead for the Deadman’s Creek Trail.  Our goal was a gazebo that sits at the top of the hill in the photo below. 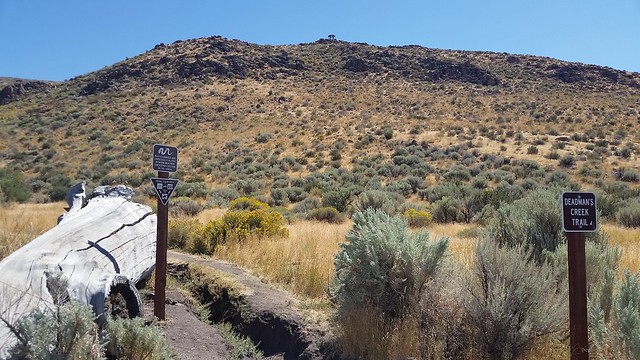 The trailhead with the gazebo on the hill 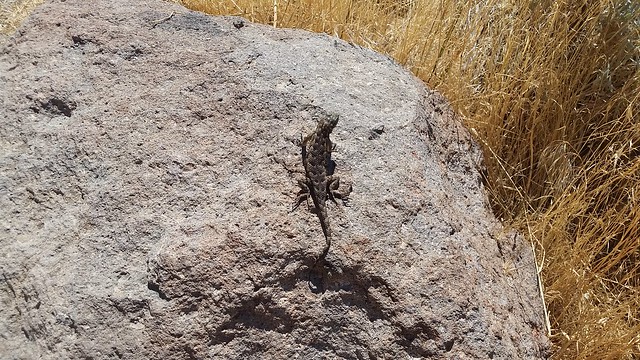 A bit of wildlife 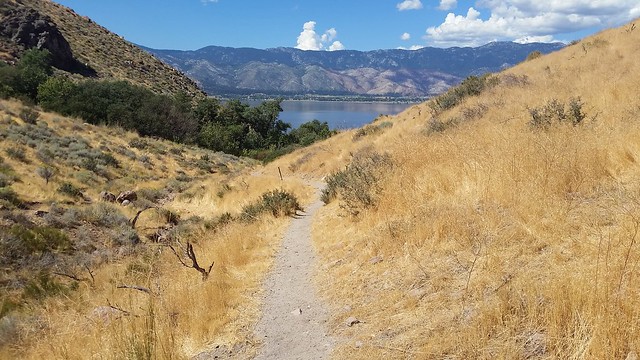 A look back at the lake

While the hike to the top of the hill is only a bit less than a mile, there is no shade along the trail, so the gazebo provides a nice place to stop and take in the view. 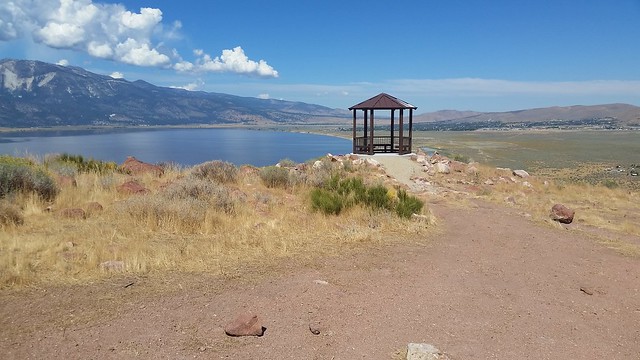 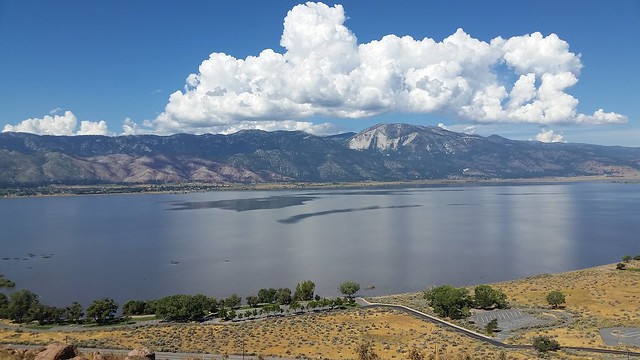 Looking down from the gazebo

After a snack in the gazebo we continued hiking up the hill for about a half mile to the top of the next hill, where we enjoyed a nice view of the gazebo and lake below. 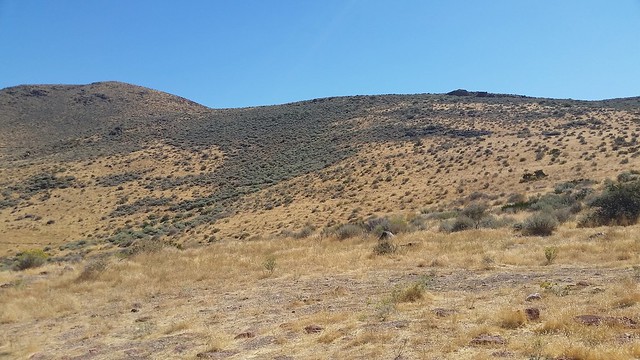 Looking up at the next hill from the gazebo 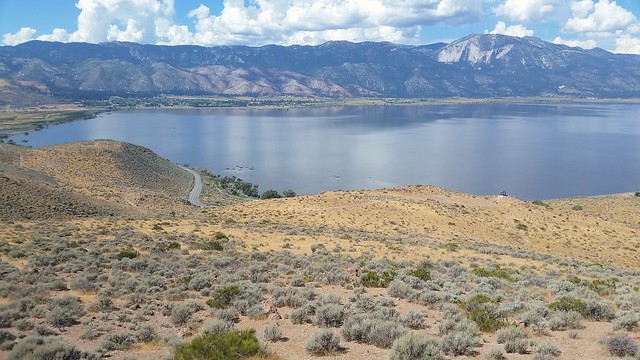 The view from the top of the hill

Once at the top we turned to the north heading for a trail we could see in the distance. 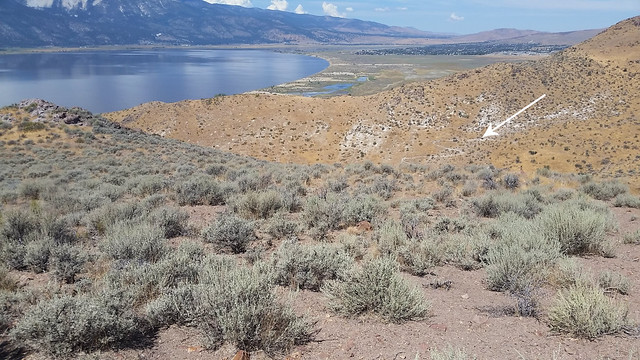 The trail in the distance

We couldn’t find any defined path leading to the trail in the distance so we just headed across the hillside.  It became a bit steep so we had to be careful as we made our way down to the trail. 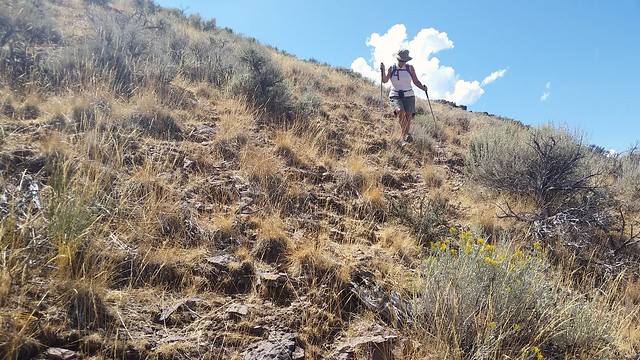 Once down to the main trail we headed back toward the trailhead.  Along the way we passed a series of markers that identified plant life along the trail.  We found marker #1 to be grammatically incorrect, as it said “reptiles” and there was only one on the rock next to it. 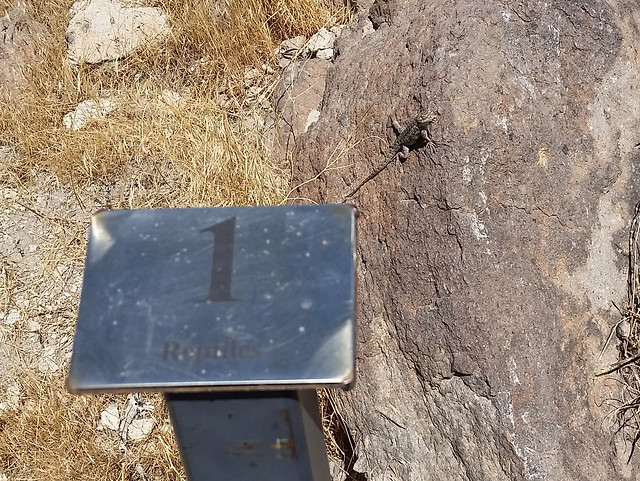 “Reptile” would be more correct!

We enjoyed both of these short hikes as they provided us with a bit of exercise while we enjoyed some great scenery.  The next hike on our list is a bit more challenging with great views of Lake Tahoe.  More on that later . . .

13 Responses to Couple of Short Hikes Near Carson City