Posted on September 11, 2017 by placestheygo

We left the fairgrounds in Klamath Falls on Friday morning and had a nice drive of about 200 miles to Susanville, CA.   We took OR 39 south into California where it becomes CA 139.  At Canby we turned east for about 20 miles on CA 299 to Alturas where we picked up US 395 heading south.  CA 139 does go right to Susanville, saving 40 miles, but it looked to be a bit dangerous for a large vehicle.   Once in Susanville we quickly set up in our site at the Susanville RV Park.  This is a decent park with level, concrete, pull-through sites. 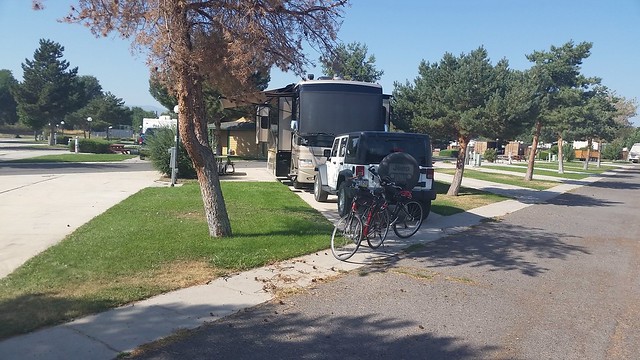 Susanville was once a logging and mining center.  Today the government is the main employer.  The population was 17,974 in the 2010 census, up from 13,541 in the 2000 census. Much of the population increase is related to persons held at two state prisons in the city.  Nearly half the adult population of Susanville works at the three prisons (a federal facility is in nearby Herlong) in the area where 11,000 people are incarcerated.

But, fortunately, our visit was not mandated by any court.  We voluntarily stopped here for a visit to the east side of nearby Lassen Volcanic National Park.  We only had one day to visit the park so the nimble hiker chose a hike in the Warner Valley area.  We drove west on CA 36 about 50 miles to the town of Chester, where we turned north on Feather River Drive which became the Chester Warner Valley Road.  Sixteen miles later (the last three on dirt) we arrived at the trailhead. 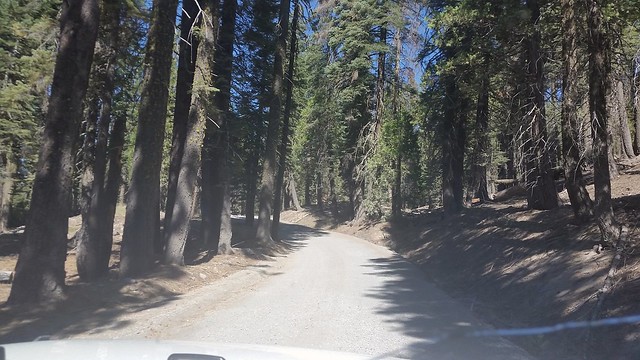 Final dirt section of the road 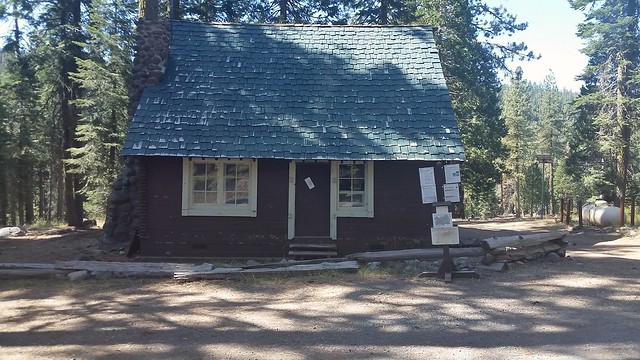 The rustic ranger station was closed 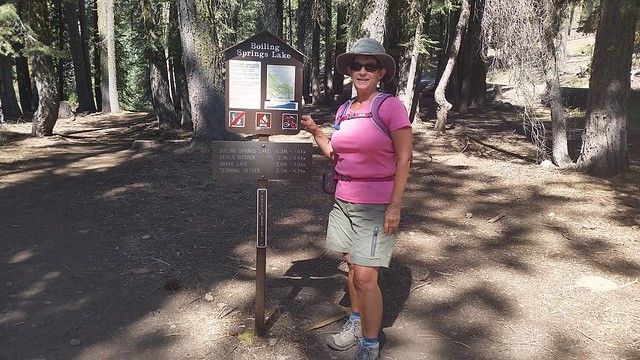 This part of the trail is part of the Pacific Crest Trail, which goes from the Mexican to the Canadian Border through the mountains of California, Oregon, and Washington.   The first section goes along Hot Springs Creek, which was still flowing strongly. 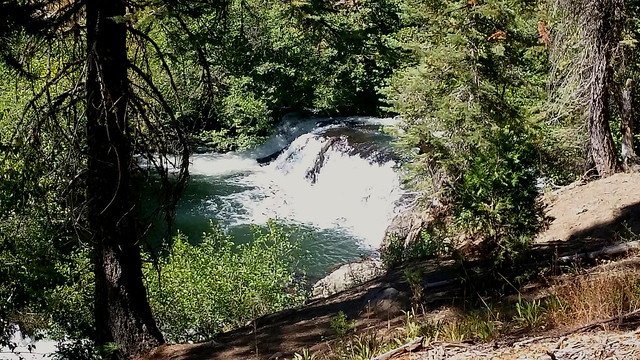 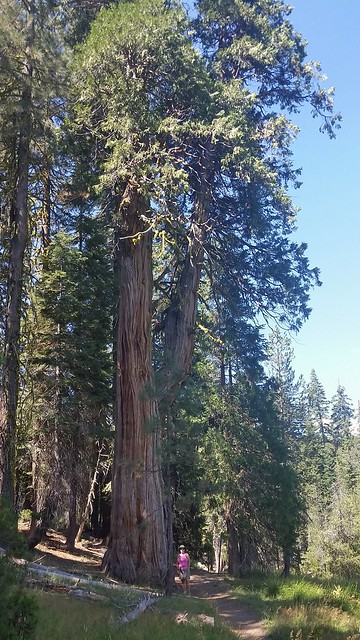 Some trees here are very tall

Lassen Volcanic NP contains a number of hydrothermal areas.  We planned to hike to two of the three located in this section of the park.  We knew we were near some thermal activities when the trail crossed over a little stream. 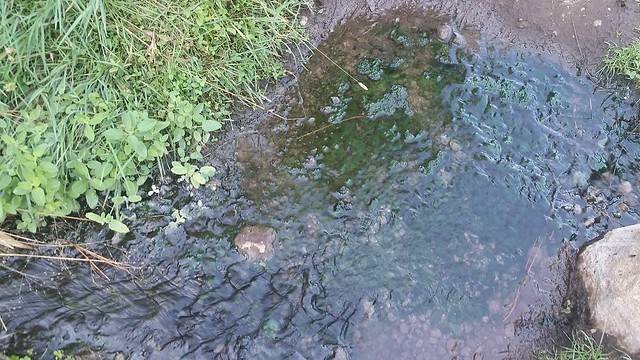 John tested the water and quickly found that it was hot, very hot! 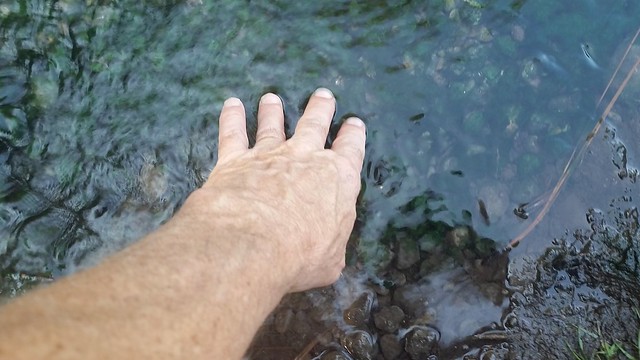 Too hot to touch!

Just past that stream we had to wait a few minutes for a doe and her fawn to leisurely cross the trail while enjoying a snack. 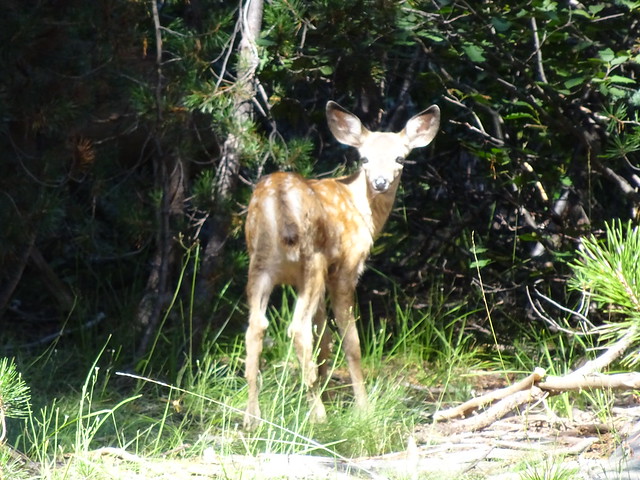 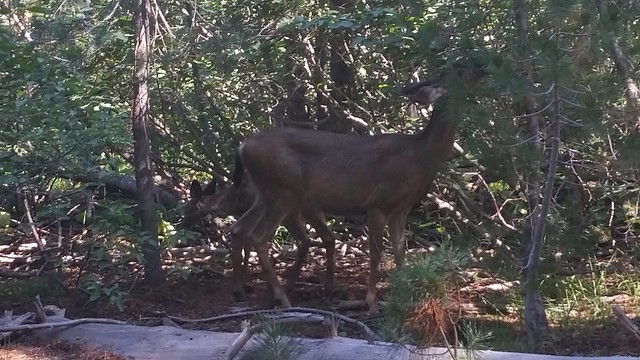 As we crossed another small stream (cold water), we spotted two crude paddle wheels turning in the water. 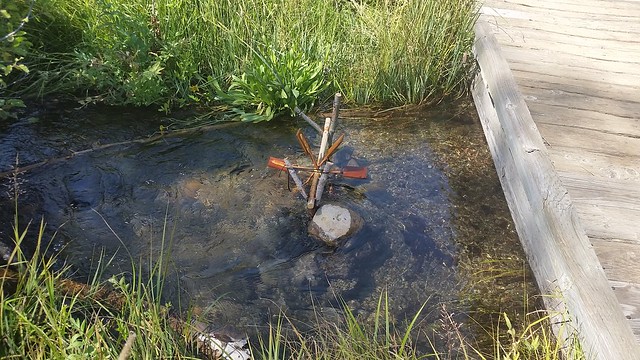 We speculated that they may have been part of a children’s activity held at the nearby Drakesbad Guest Ranch.  Who knows? 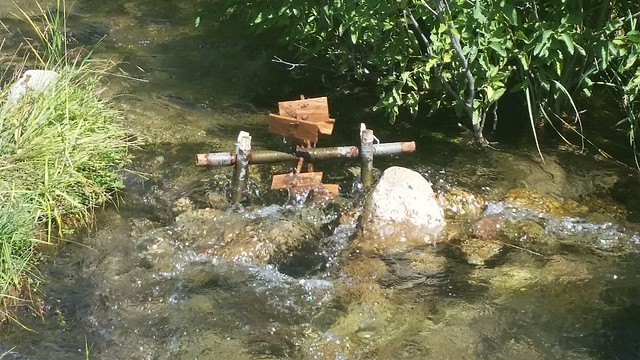 The trail meandered through a number of grass filled meadows before it headed up into the woods to our first destination, the Devil’s Kitchen, about 2.5 miles from the trailhead. 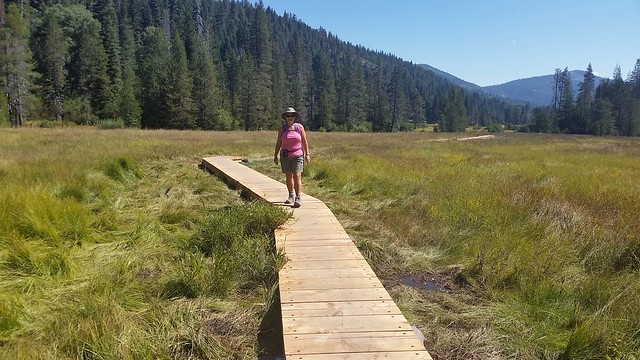 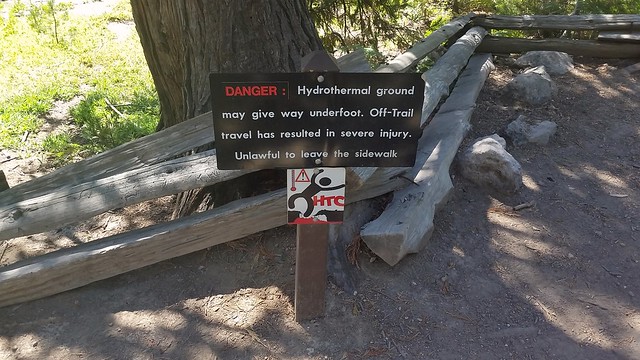 Once at the hot springs area the trail loops right through the hydrothermal action. 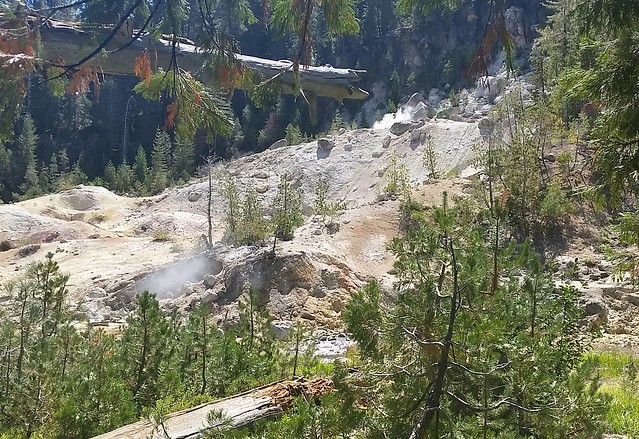 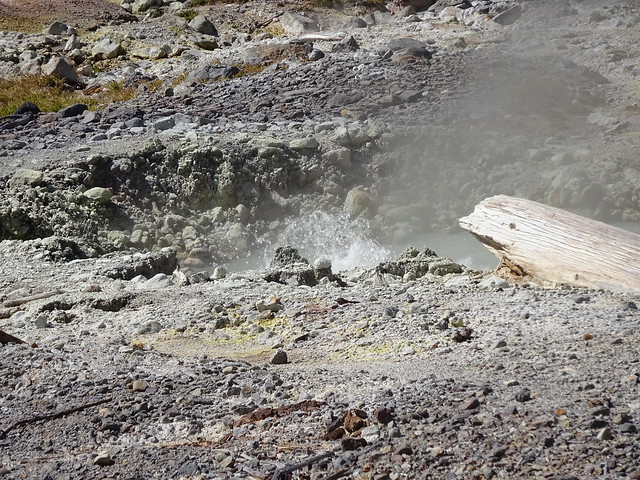 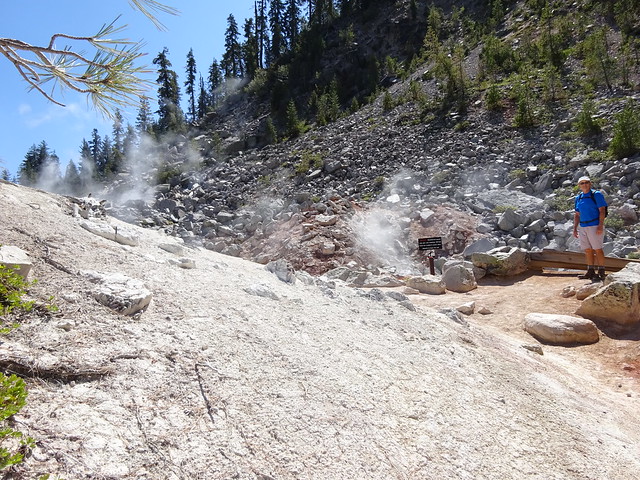 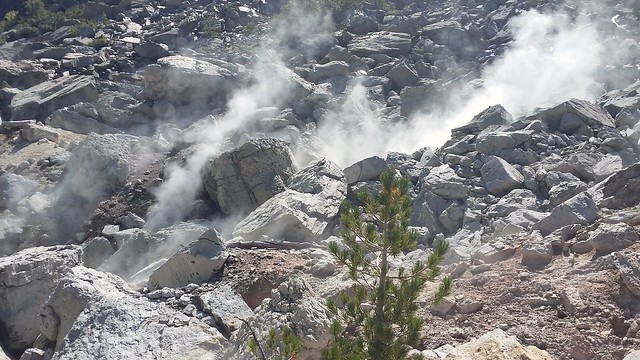 After going around the loop we hiked back down the same trail for about two miles before turning on to the trail to Boiling Springs Lake. 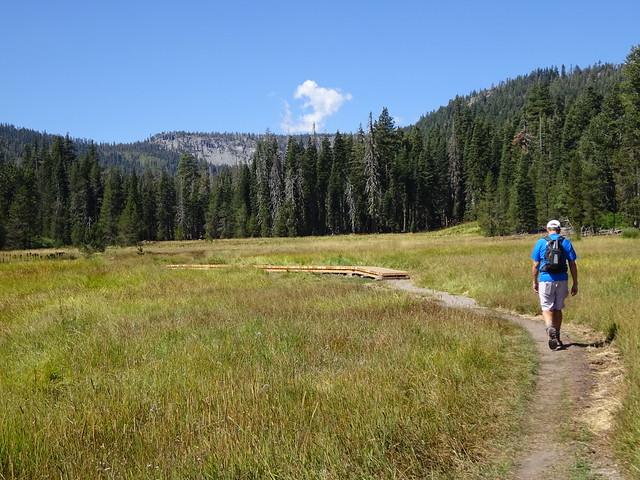 Hiking back down the trail

A number of steam vents are located under Boiling Springs Lake, keeping the temperature of the water around 125 degrees.  A trail goes all the way around the rim, giving us some great views of the lake and the mud pots bubbling along the shoreline. 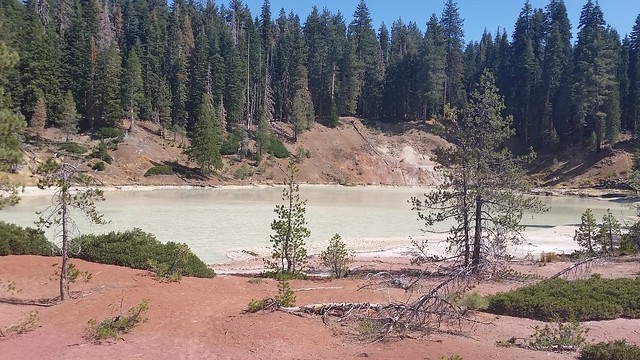 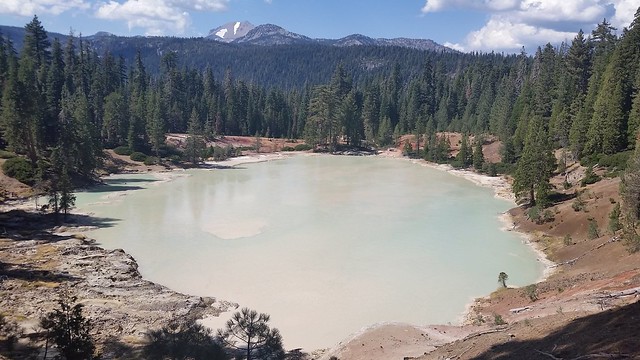 Boiling Springs Lake with Lassen Peak in the background 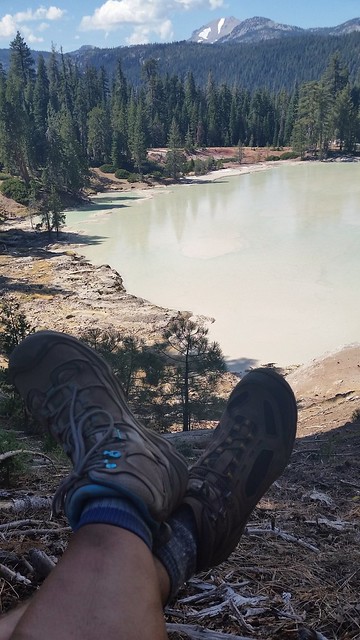 We returned to the trailhead after hiking a bit over seven miles.  Perfect weather, a mostly empty trail, and the cool hydrothermal areas made this a hike to remember.