A Visit to Crater Lake

Posted on September 9, 2017 by placestheygo

We left Bend mid-morning on Wednesday and headed south on US 97.  The trip is probably very beautiful on a normal day, but heavy smoke from all the nearby fires limited visibility and made breathing unpleasant. 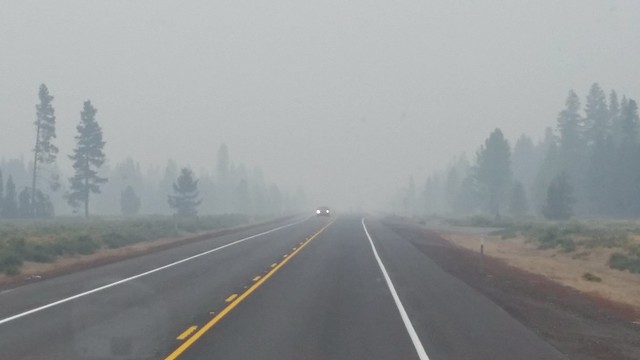 Our destination was the fairgrounds in Klamath Falls, about 135 miles south of Bend where we planned to stay two nights, allowing a day to drive up and visit Crater Lake.  But with all the smoke we decided to just pay for one night and, if the air did not clear, continue heading south the next morning.  But Thursday dawned with fairly clear skies, so we paid for another night at the fairgrounds and headed northwest to Crater Lake National Park.

During the 60 mile drive we were unsure if we made the right decision as the smoke began to increase.  A few miles from the park we passed a camp for firefighters and a field that served as a staging area for about six helicopters use in fighting the nearby fires. 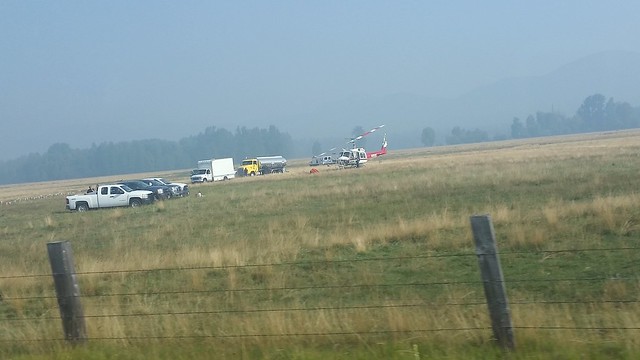 But as we approached Crater Lake the wind must have shifted and the sky became clear, giving us fantastic views of the lake. 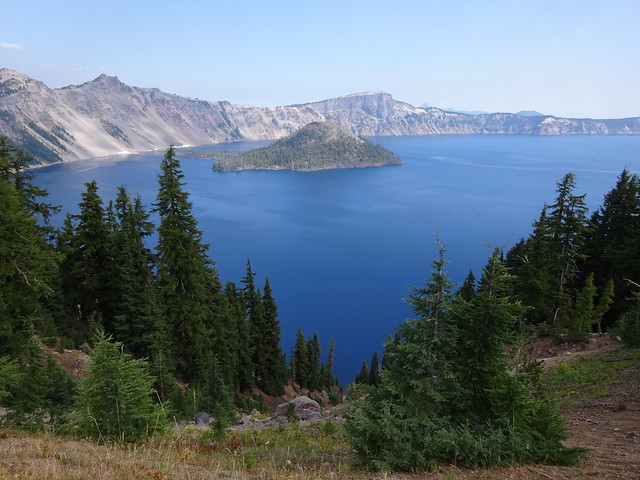 Crater Lake is a caldera lake famous for its deep blue color and water clarity.  The lake partly fills a nearly 2,148 foot deep caldera that was formed around 7,700 years ago by the collapse of the volcano Mount Mazama. 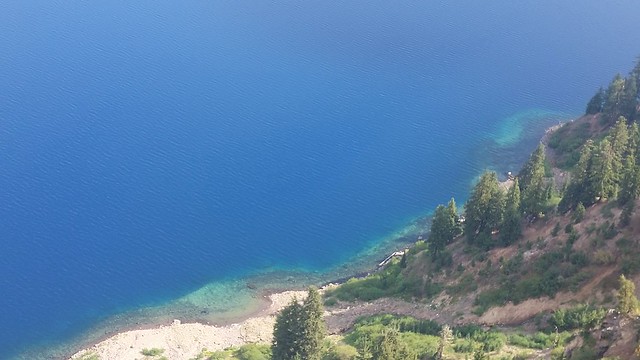 There are no rivers flowing into or out of the lake.  Evaporation is compensated for by rain and snowfall at a rate such that the total amount of water is replaced every 250 years.  With a depth of 1,949 feet, the lake is the deepest in the United States.  In the world, it ranks ninth for maximum depth and third for average depth. 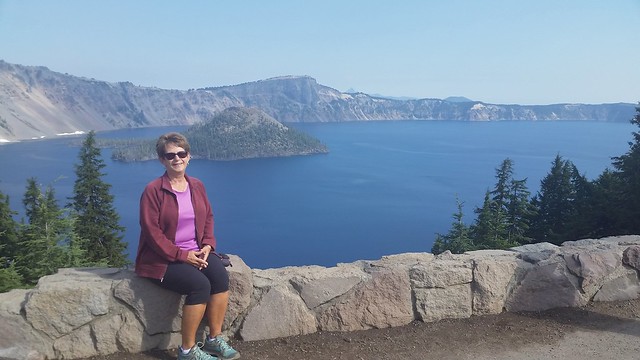 The lake is so beautiful that the background in most photos looks to be fake.  So why is the water so blue?  Water molecules, just plain water with no sediments, algae, pesticides or pollution, will absorb all the colors of the spectrum except the blues. Those wavelengths will bounce back and make the water appear blue. The key is to have relatively pure water and lots of it.  There has to be enough molecules to absorb all the other colors.  There are 4.6 trillion gallons of water in the lake, so it works really well. 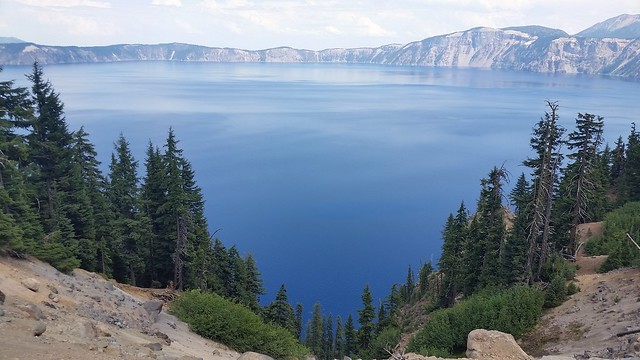 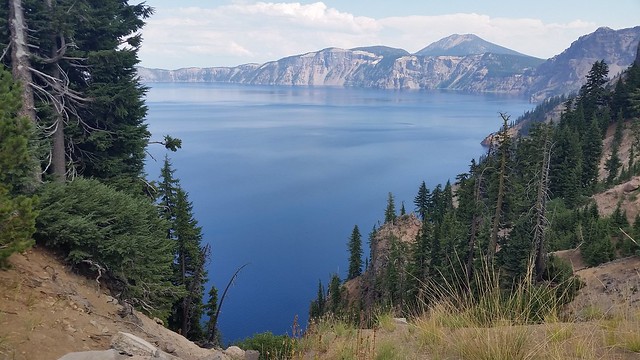 There are two islands in the lake.  The largest is Wizard Island,  formed from a cinder cone that erupted after Crater Lake began to fill with water.  The other is a small one called the Phantom Ship.  Though it resembles a small sailboat, the island is as tall as a 16 story building.  It was made of erosion resistant lava about 400,000 years old, the oldest exposed rock within the caldera. 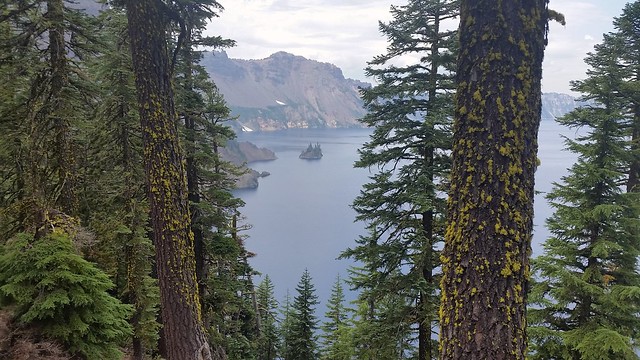 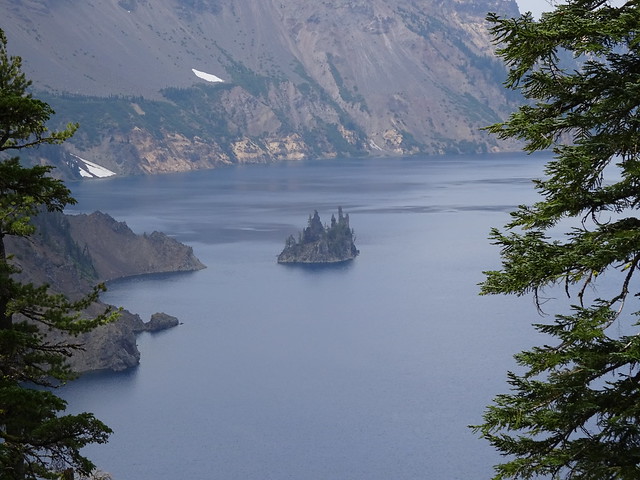 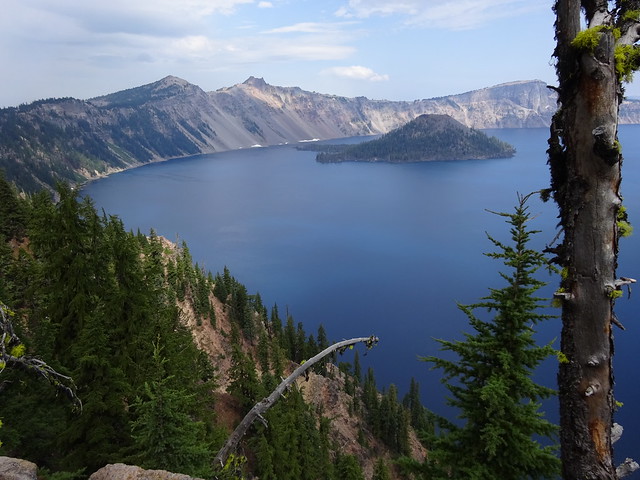 Rim Drive is a 33 mile road that encircles Crater Lake.  It takes about an hour to drive the road without stopping, but there are many overlooks along the route that increase the average time to about three hours.  Unfortunately, the road (and hiking) around the west side of the lake is currently closed due to paving work and wildfires.  But we were able to enjoy the drive around the east side of the lake.  One of our stops was a six mile detour from Rim Drive to visit the Pinnacles Overlook.  There colorful spires 100 feet tall are being eroded from the canyon wall.  A short trail (.4 of a mile) along the edge of the canyon provided great views of the pinnacles below us. 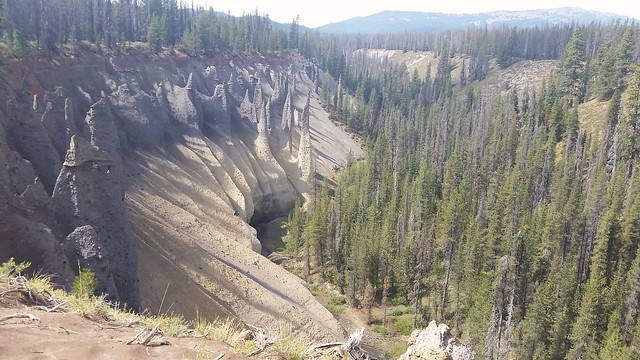 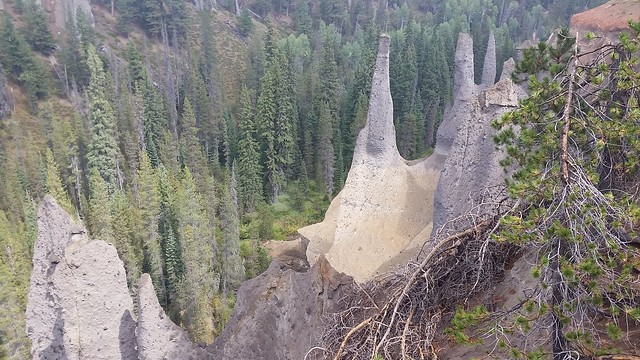 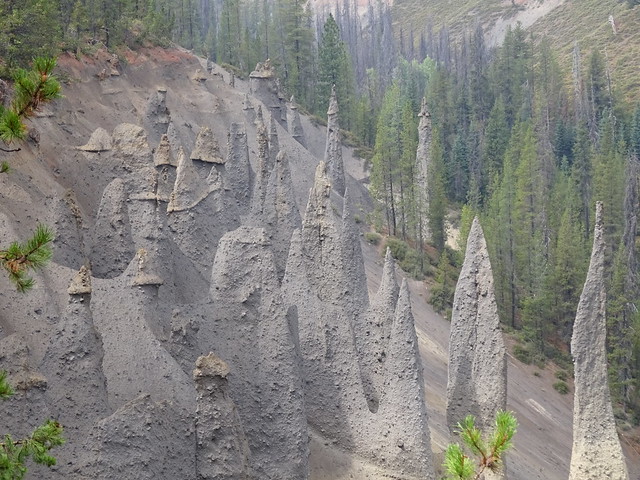 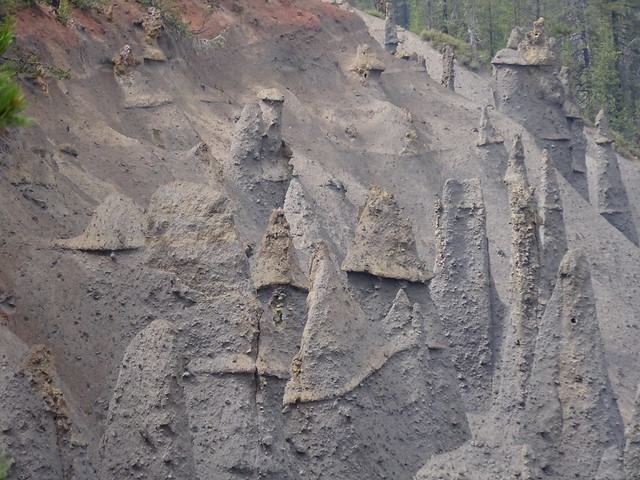 Right along Rim Drive between the Phantom Ship Overlook and the park headquarters is Vidae Falls.  A spring fed creek drops 100 feet over a series of ledges.  Even in early September the water flow was strong. 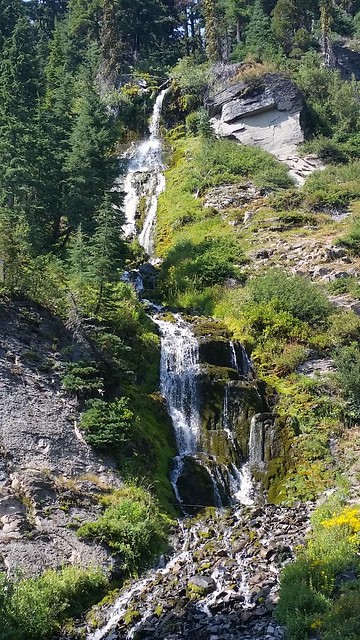 We felt very fortunate to be able to see Crater Lake on a clear, sunny morning.  The day before it was obscured by smoke and just before we left the lake a thunderstorm blew in and it rained quit heavily.  Crater Lake is one of the most beautiful spots in the country, but you really need the sunshine to see the full effect of the deep blue water.

We will now continue heading south into California.  Next up is a week-end stay in Susanville.  More on that later . . .

30 Responses to A Visit to Crater Lake