The weather the past few days has been classic Oregon coast with fog, clouds, and cool temperatures.  But that didn’t stop us from getting out and about each day.   One interesting stop was a brief visit to the little Darlingtonia State Natural Site, just north of Florence along US 101.

Darlingtonia State Natural Site is a state park and botanical preserve dedicated to the preservation of a rare plant.  Darlingtonia californica (sounds like the name of a movie star) is a carnivorous plant, commonly known as the cobra lily or pitcher plant, which traps insects in its hollow tubular leaves. Its  top is flared into a hollow dome with a forked “tongue” that gives the species its common name.  Darlingtonia are found only in wet meadows and bogs with acidic soils low in nitrogen. 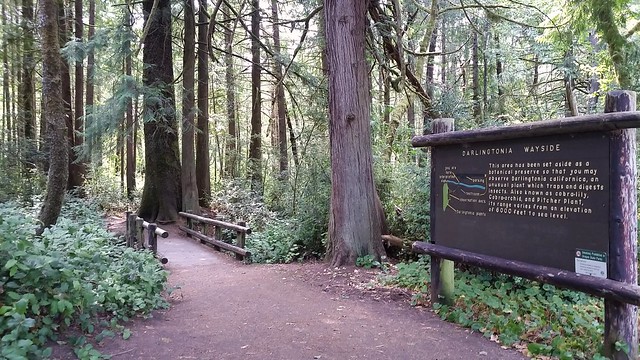 The park has a short loop trail through a peat bog area overlooking patches of Darlingtonia.  It is the only Oregon state park dedicated to the protection of a single plant species. 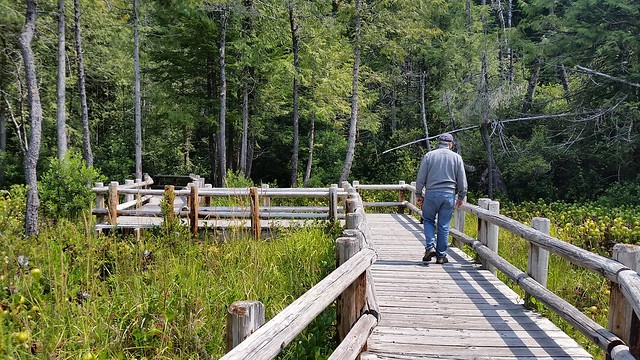 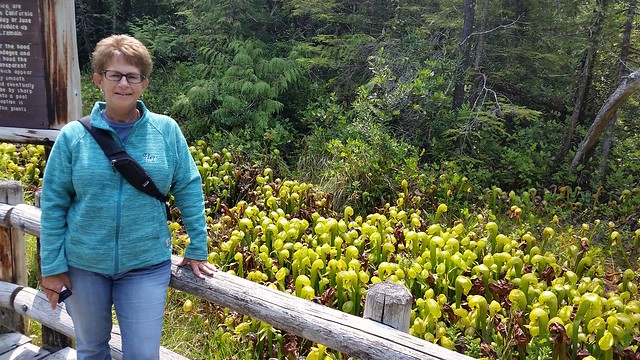 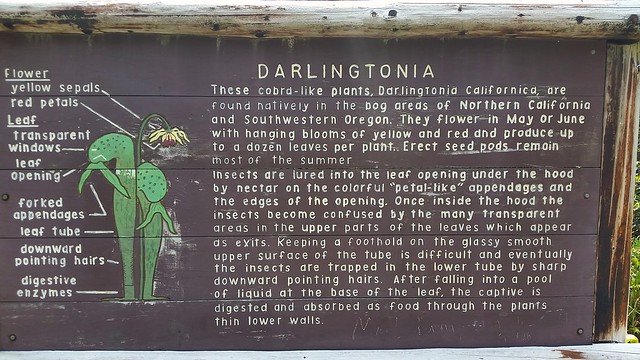 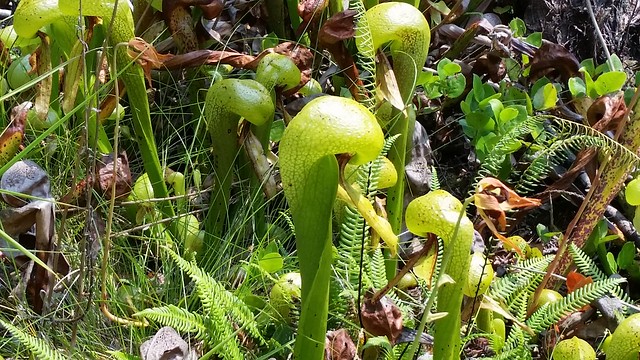 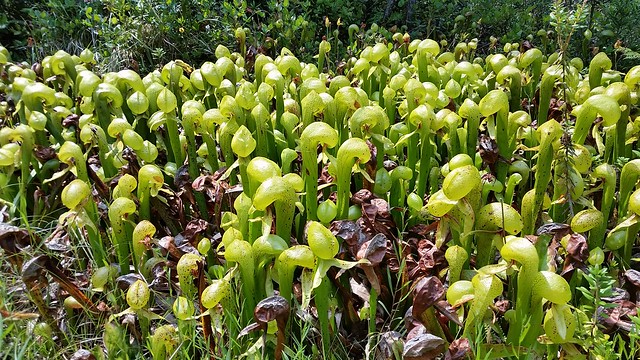 One afternoon we drove north on US 101 to check out some of the scenic views along the coastline.  We tried to wait for an afternoon with some sunshine but the forecast for the next few days was not encouraging, so off we went.  While sunshine would have been better, the fog did make for some interesting views. 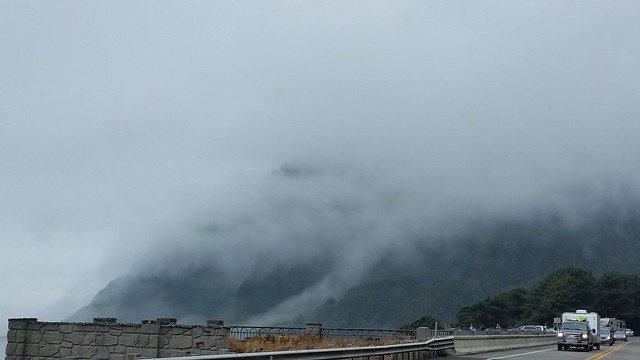 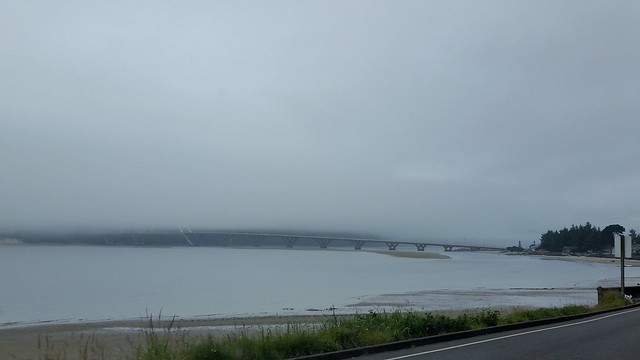 When we passed the sign in the photo below John remarked that US 20 goes right in front of his old junior high school in Erie, PA.  Then, he remembered that it was torn down about 45 years ago!  Sad . . . 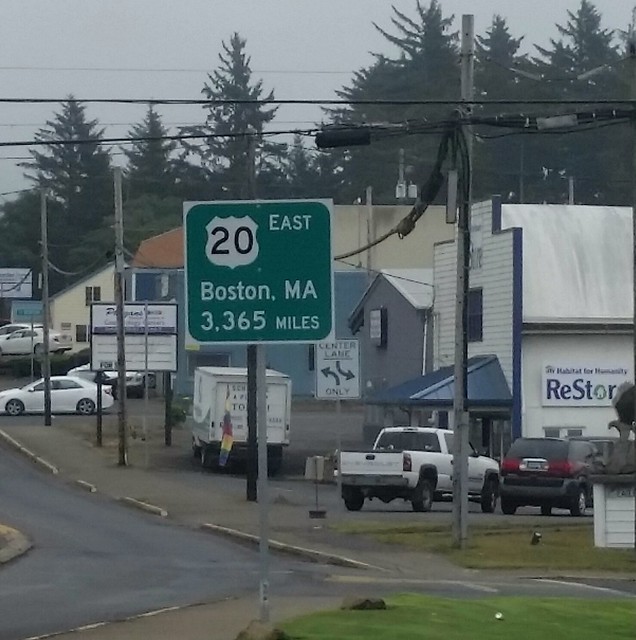 We ended up in the coastal town of Newport, which has a historic old town section along Yaquina Bay.  As we walked along Bay Boulevard we could hear barking near the water.  OK, time to check out the sea lions. 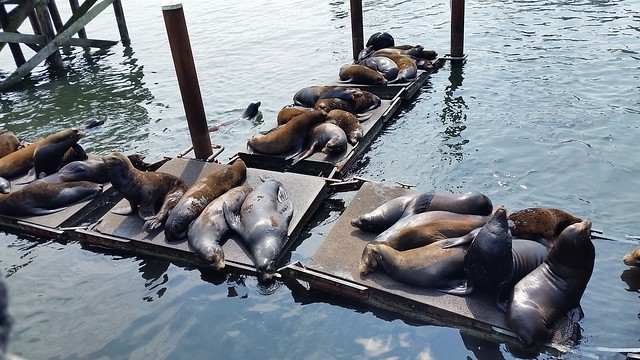 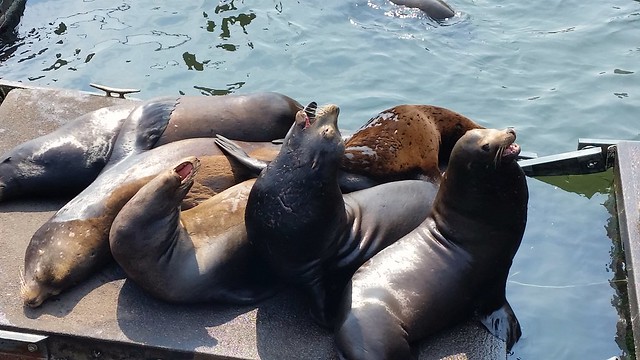 After touring around town a bit we stopped for a great view of the Yaquina Bay Bridge before heading back to the south. 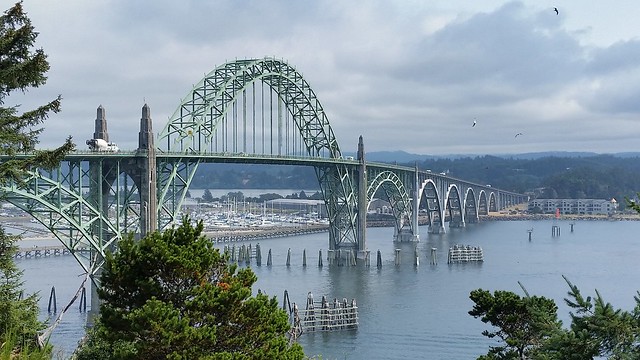 For our final adventure along the coast, we drove north of Florence for about 15 miles to visit the Heceta Head Lighthouse.  We intended to combine a couple of trails into a long hike by parking at the Washbourne State Park day use area a few miles past the lighthouse and hiking back on the Valley Trail.  But when we arrived at the park there was a sign at the trailhead stating that the Valley Trail was closed.  So we drove back down US 101 a couple of miles to a small parking lot along the highway.  There we got on the Lighthouse Trail for a 1.25 mile hike to the Heceta Lighthouse.  The trail goes through some beautiful old growth forest.  While not very long it goes steeply up and over Heceta Head,  then steeply back down to the lighthouse. 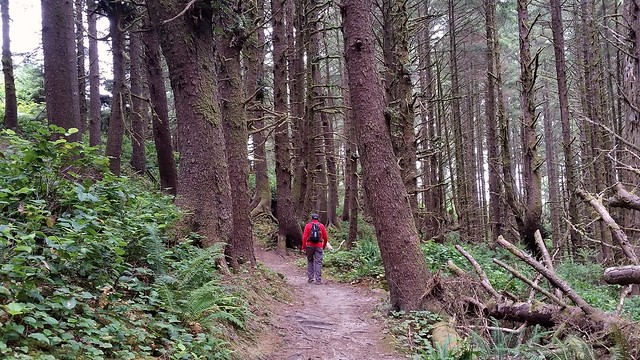 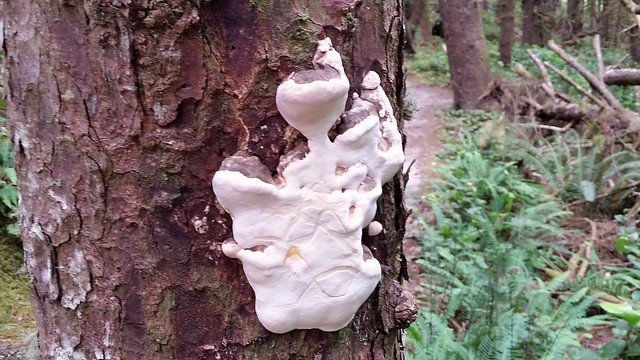 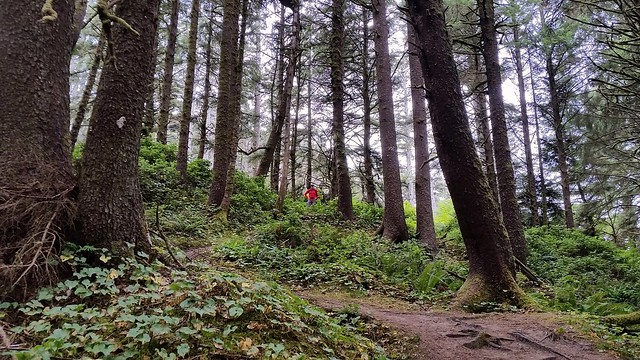 Where’s John? (he really is in the photo) 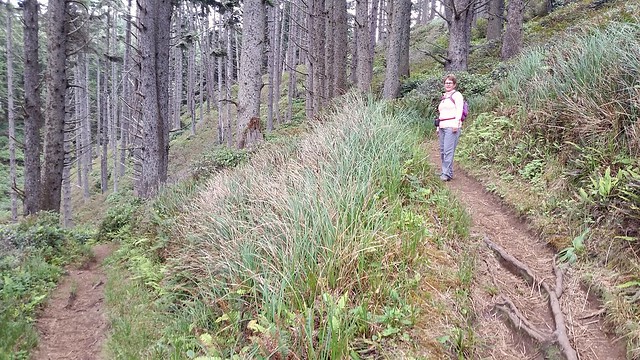 Going up a series of switchbacks 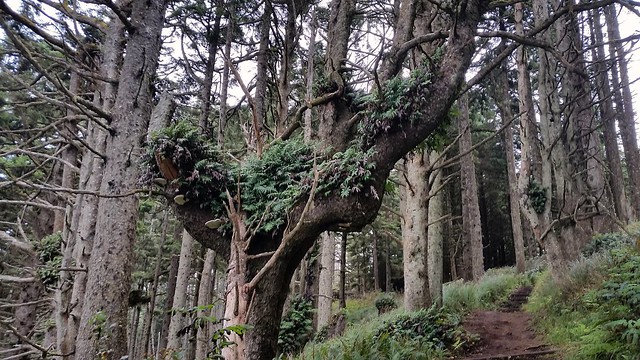 Ferns grow in every notch of the trees 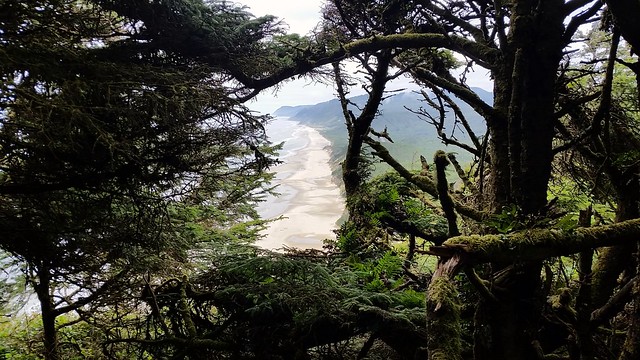 Hobbit Beach to the north 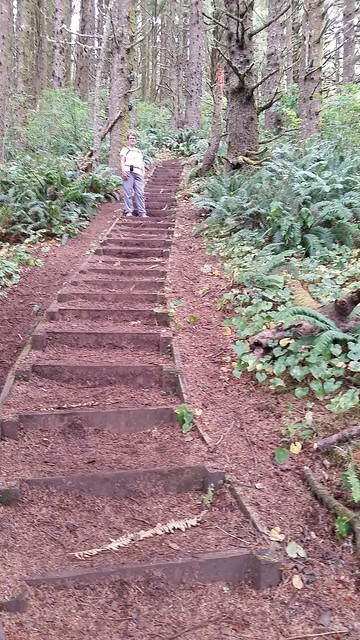 Down a long series of steps

As we hiked down the south side of Heceta Head, the lighthouse came into view below us. 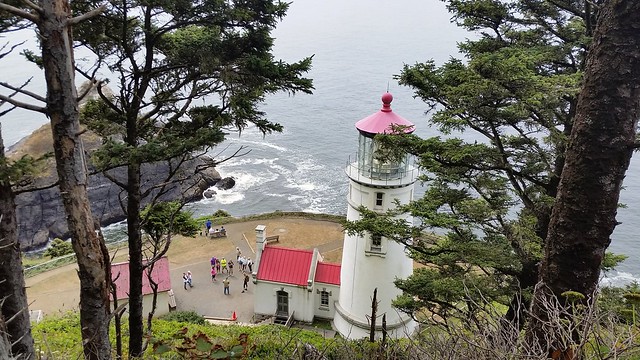 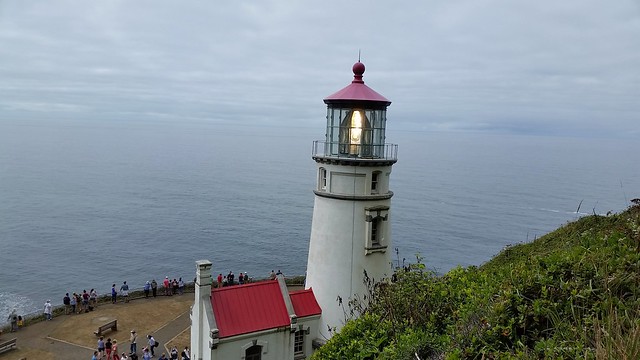 Looking to the east from the lighthouse we could see the Cape Creek Bridge.  US 101 goes through a tunnel at the south end of the bridge. 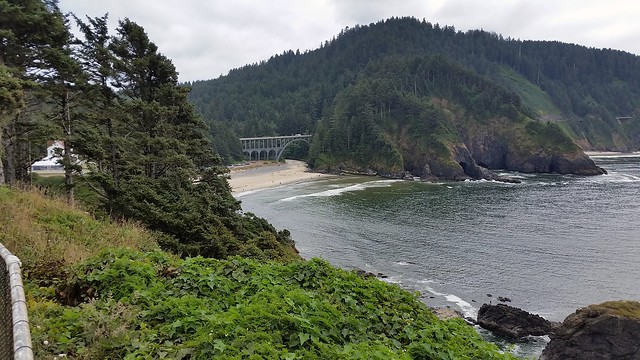 Built in 1894, the 56 foot tall lighthouse shines a beam visible for 21 nautical miles (24 mi). The first light came from a five wick kerosene lamp.  Today Heceta has the only active British made lens of its kind in the U.S. and is the brightest beacon on the Oregon coast. 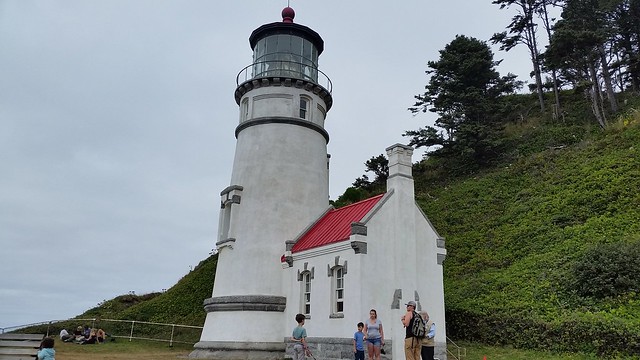 While we did enjoy seeing the lighthouse, the best part of the visit was watching two gray whales feeding just off shore. 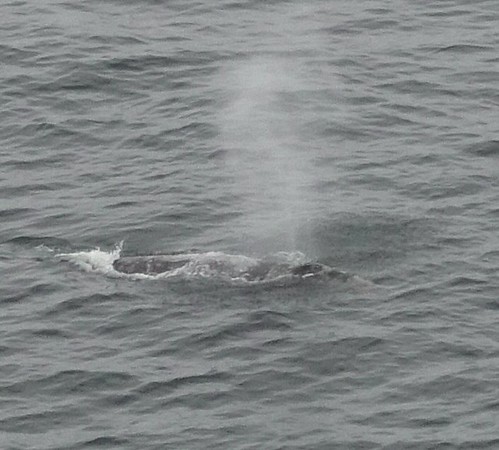 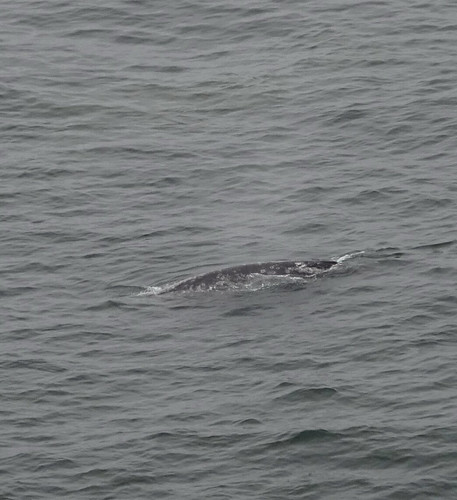 We hiked back over Heceta Head to the Jeep and headed south.  Just south of the tunnel there is a scenic overlook with a beautiful view north back to the lighthouse. 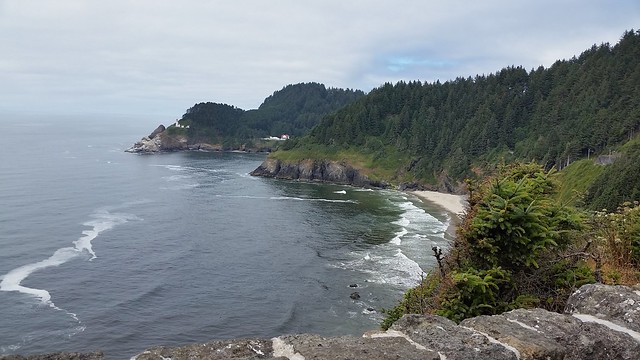 Well, that wraps up our impromptu 12 day stay along the Oregon Coast.  Now it’s time to head inland back to Coburg where we have an appointment at Cummins Northwest to have repairs made to the motorhome engine.

26 Responses to Visits to Darlingtonia, Newport, and Heceta Lighthouse