Earlier this week we drove 23 miles north on US 101 for a visit to Cape Perpetua, a perfect example of a coastal headland.  A headland is land surrounded by water on three sides characterized by high, breaking waves, rocky shores, intense erosion, and steep sea cliffs.  Cape Perpetua was named by Captain James Cook in 1778 as he searched for the Pacific entrance to a Northwest Passage.  Cook gave the cape the name Perpetua because it was discovered on St. Perpetua’s Day. 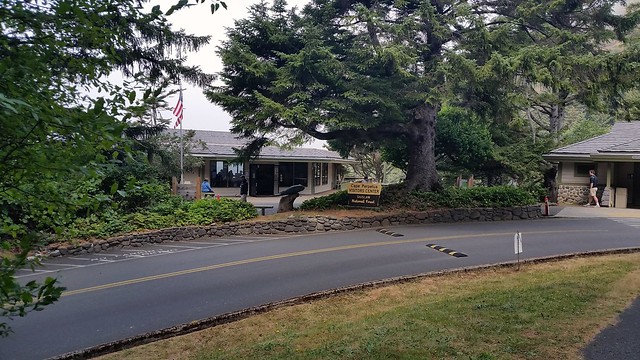 After speaking with a ranger in the visitor center, we decided to take the St. Perpetua Trail, a 1.4 mile path that goes steeply up 700 feet to what the park describes as the “best view on the Oregon coast.” 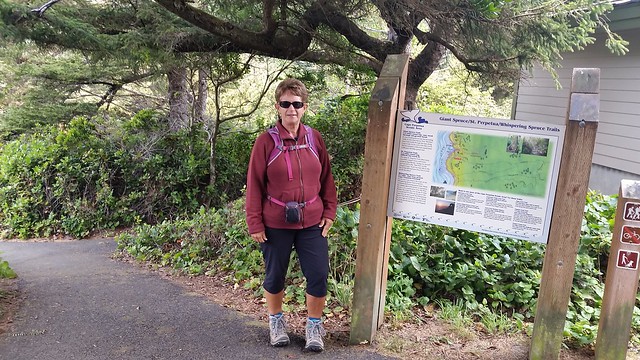 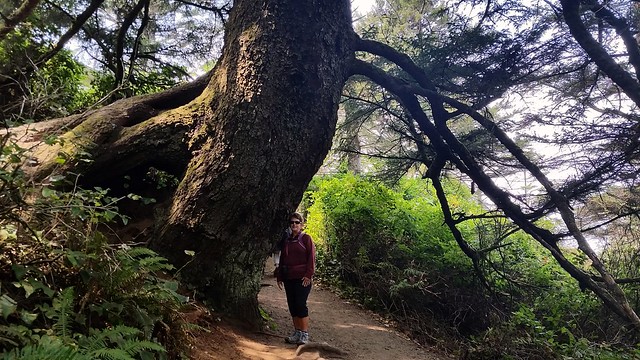 As we gained elevation the trail went right along the edge of the cliff, giving us some great views of the ocean below and the end of the trail high above us. 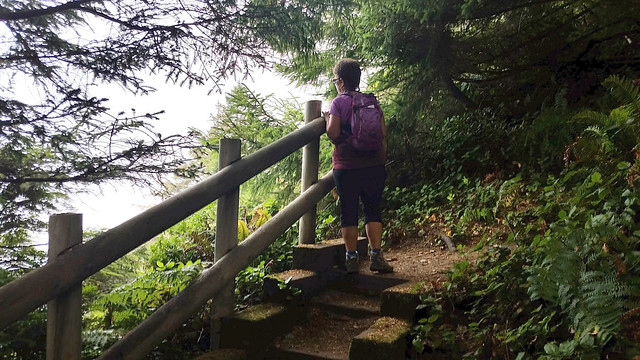 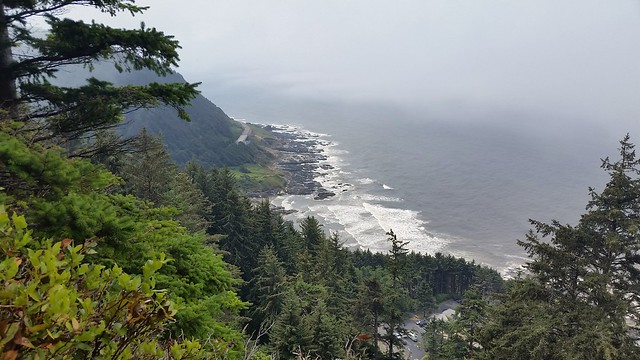 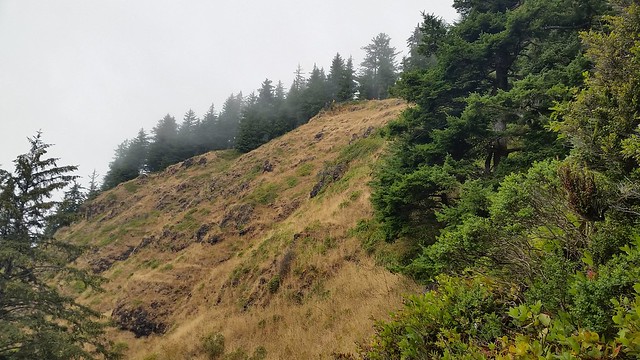 As we reached the top the fog thickened, giving the view an eerie glow. 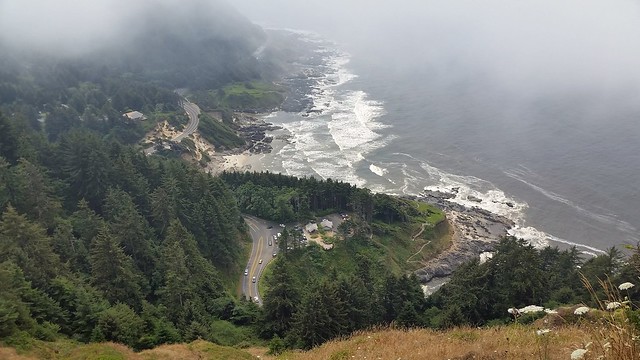 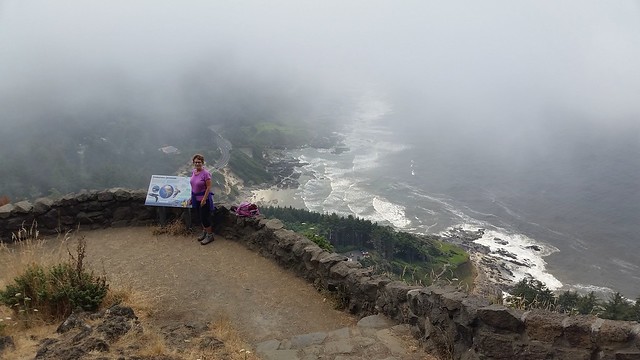 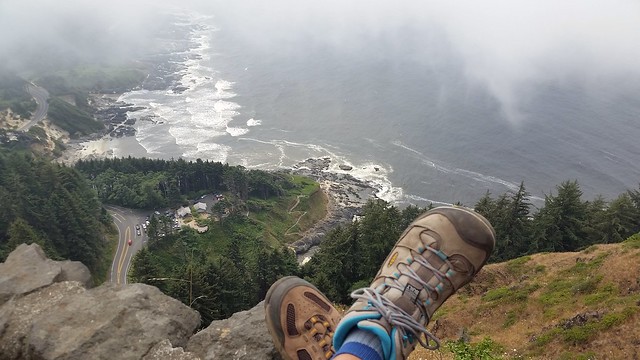 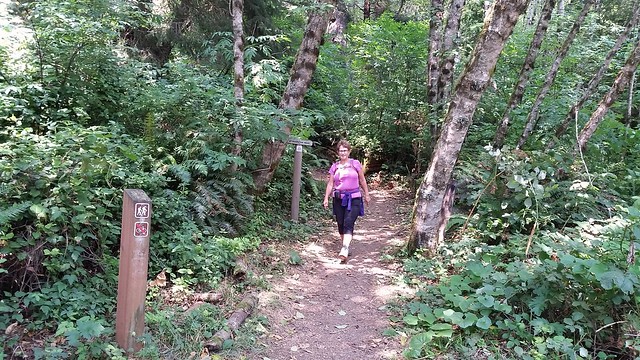 Gravity was our friend on the return hike

Returning to the visitor center we crossed over to a trail that leads down to the ocean.  The path goes near the highway before it turns a bit and heads down to a tunnel. 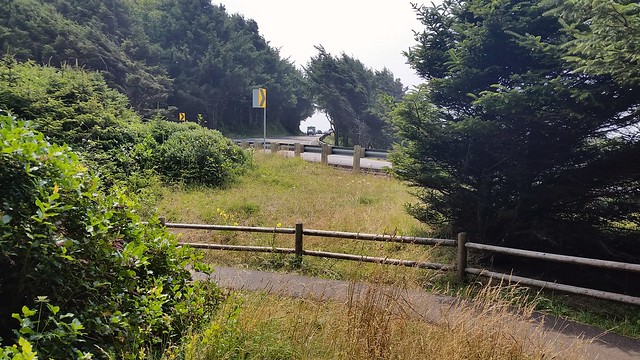 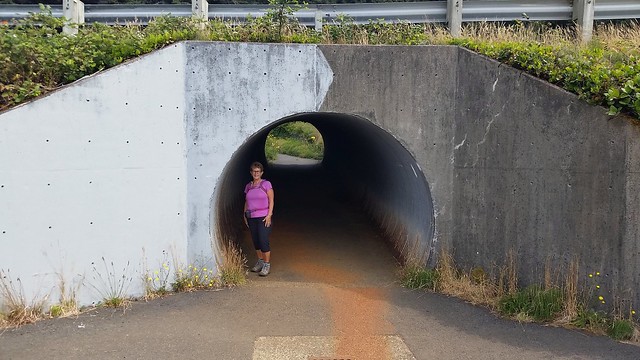 Exiting the west side of the tunnel we passed a group of trees that give a graphic indication as to where the wind comes from. 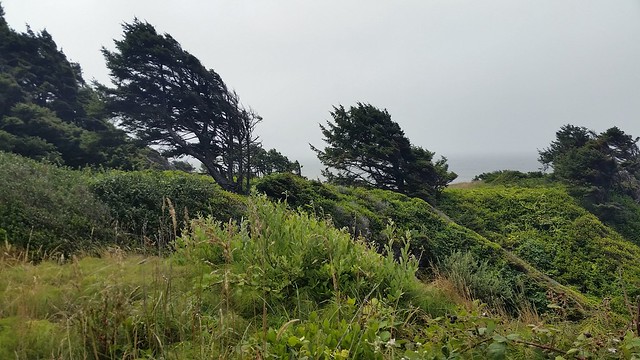 We hiked a short distance south to where a creek enters the ocean.  From there we had a nice view of the bridge carrying US 101 over the creek. 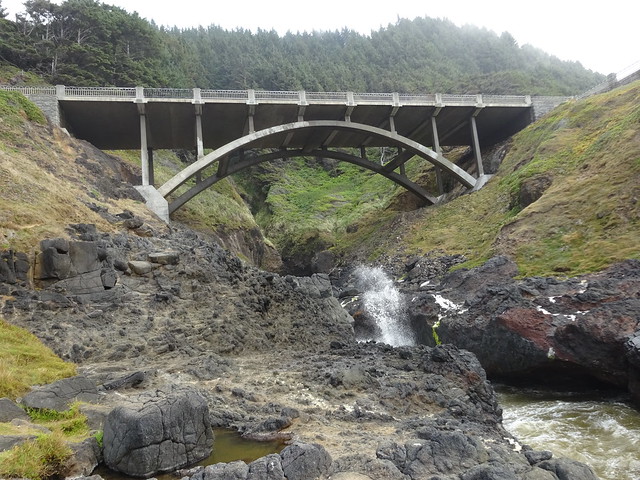 There are three interesting spots along this area of the shoreline.   The first is called Cook’s Chasm, a narrow split in the rocks where water shoots up from waves during high tide. 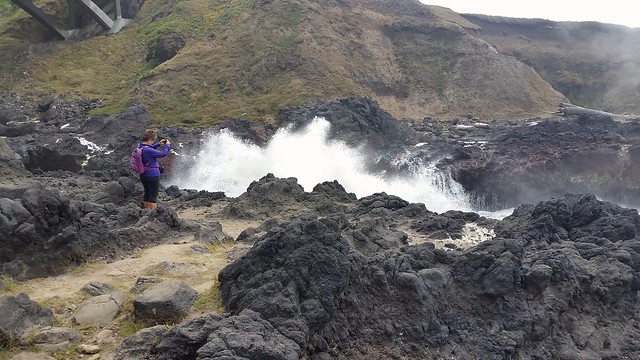 Next to Cook’s Chasm is an opening in the rocks that is known as the Spouting Horn which send puffs of mist into the air. 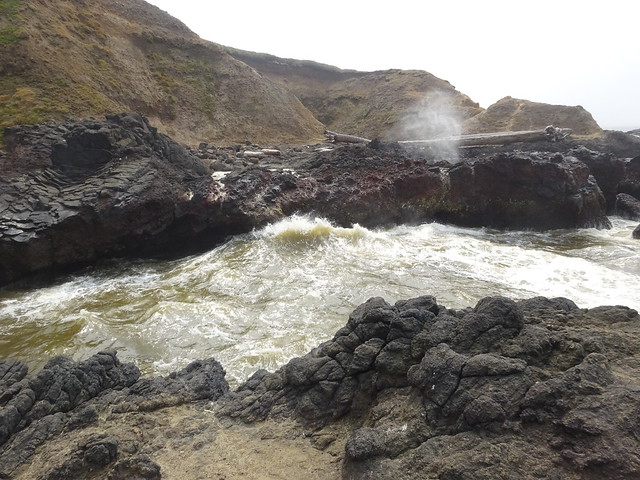 Nearby is a hole in the rock known as Thor’s Well.  The hole is carved out of the basalt shoreline.  One theory is that it was initially a sea cave until the roof collapsed, leaving a hole on the surface level.  Because of its location right against the  ocean you get a constant flow of waves rolling in from underneath and filling the bowl from the bottom. Depending on the tide level, sometimes it just bubbles to the top, while other times it’s bursting out in a violent spray. 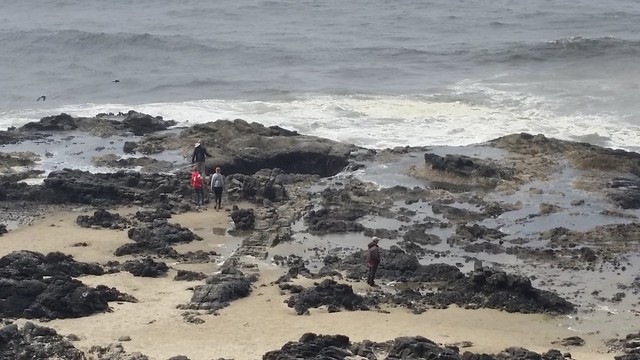 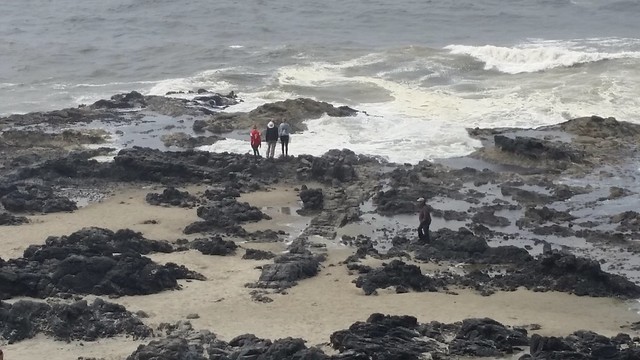 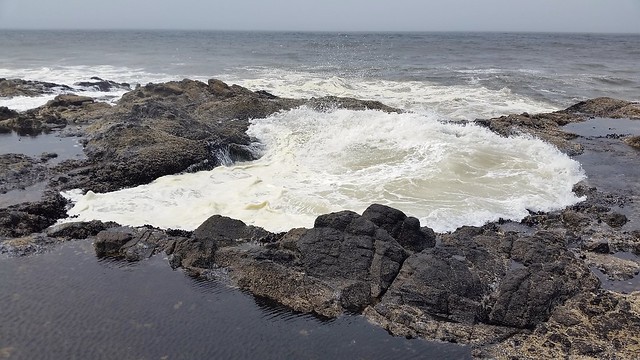 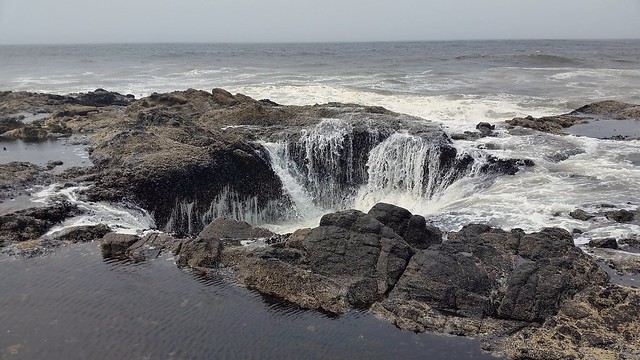 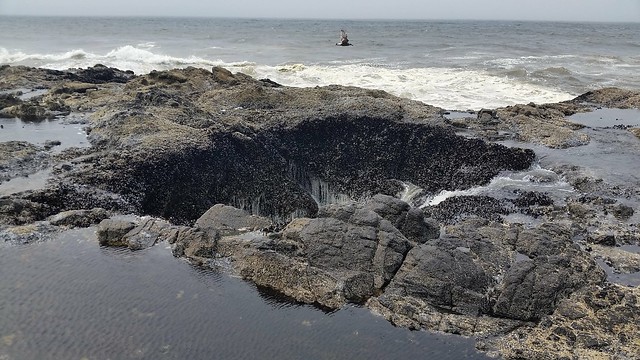 While hiking back we could see the observation point where we had lunch, although it was a bit obscured with fog. 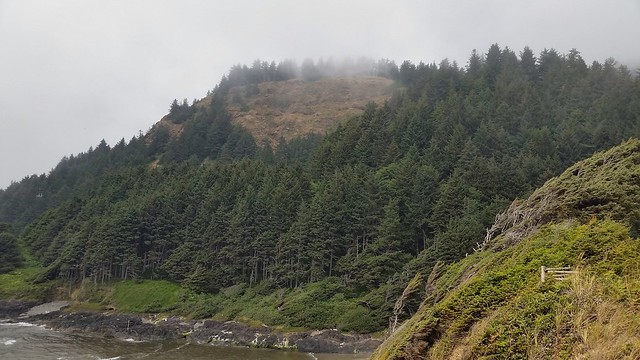 The CCC built a structure called the West Shelter observation point near the top of the cape. During World War II the shelter observation point was used as a coastal watch station and a large coastal defense gun was temporarily installed.  The shelter is located up near the observation point where we enjoyed lunch earlier in the day, but we forgot about it when we were there.  So before leaving the area we drove back up in the Jeep to check it out.  Unfortunately, the view was totally obscured by the fog. 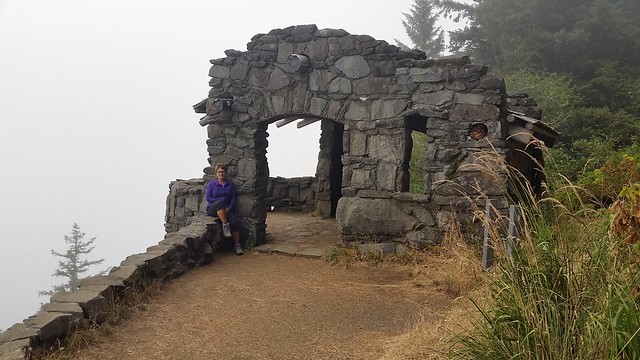 The Pacific is on the left, obscured by fog

While we would have preferred a clear day for our visit to Cape Perpetua, the fog did create some interesting views.  If you go there, try to make it at peak high tide like we did.  That’s when the Cook’s Chasm, Spouting Horn, and Thor’s Well are most spectacular.