Florence, Sand, and Hiking with Friends

For the first few days of our visit to the Oregon coast the weather would be foggy in the morning with sunny skies in the afternoon.  So after doing some exploring we would stop and get something to drink (Seattle based chain in a Safeway) and head down by the Siuslaw River to enjoy some quiet time along the docks. 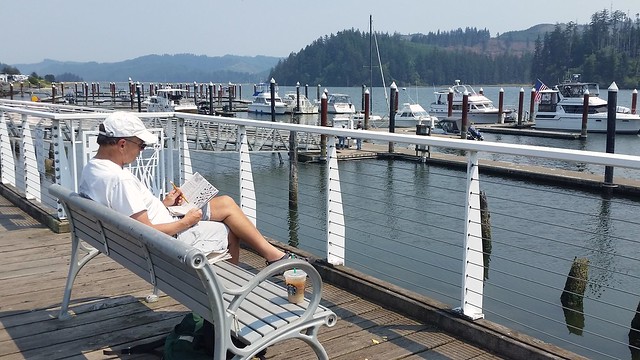 One afternoon while sitting on the bench the nimble hiker spotted a harbor seal swimming in front of us. 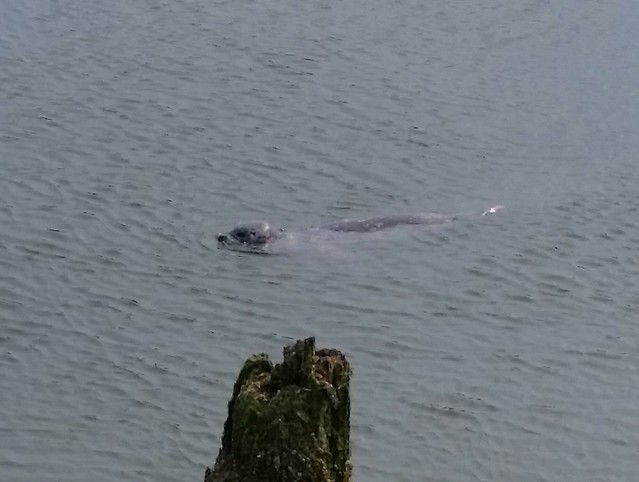 She jumped up to get a photo, knocking her Kindle off the bench.  In a “one in a million” shot, the Kindle found the small gap between boards on the dock and disappeared! 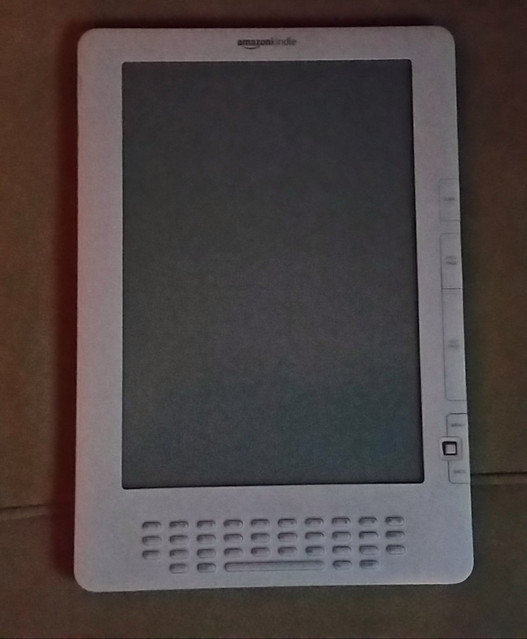 Now this Kindle is a bit old by technology standards, but she likes its large screen.  So retrieving the lost reader became a vital mission. 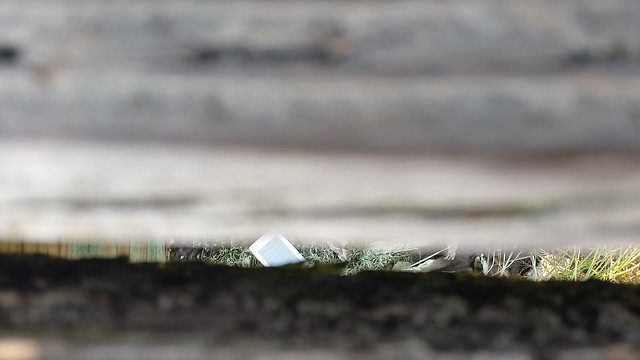 Looking down through the boards to the Kindle below

It was a bit of a distance to the end of the boardwalk where you could make your way through the weeds to get under it.  Fortunately the tide was out so the area underneath was relatively dry.  But a volunteer was needed to set out on this possibly deadly mission.  Fortunately, someone stepped forward to undertake the task.  OK, it would be more correct to say that someone was drafted (for the second time in his life) for the job! 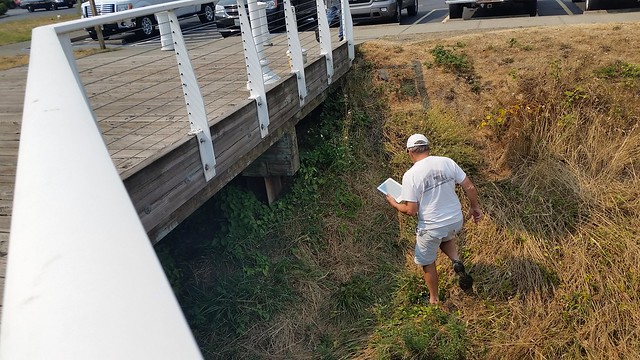 The Kindle was successfully recovered and, other than few bumps and bruises, is working properly.  Oh, and the leader of the recovery mission survived uninjured!

After the recovery mission we took a walk over to the nearby Old Town section of Florence.  Two years ago the Florence Events Center celebrated its 20th anniversary by sponsoring a Dancing with Sea Lions contest, a celebration of the sea lion and the Florence area.  The twenty colorfully painted fiberglass entries are now on display in various locations around town.  We spotted one sitting along Bay Street in Old Town. 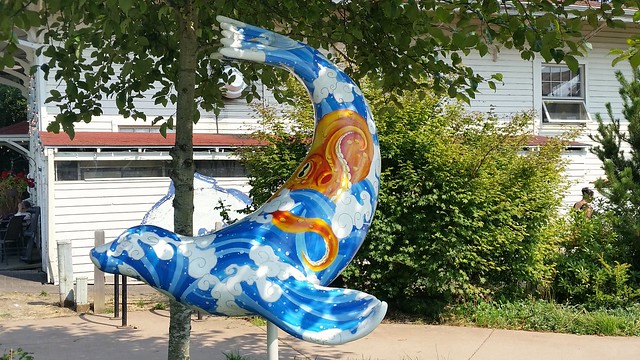 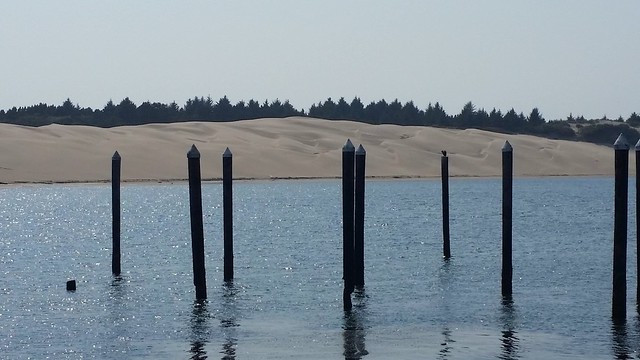 Looking back to the east we had a great view of the bridge.  The Suislaw River Bridge is a drawbridge completed in 1936 with funding from the Public Works Administration, part of FDR’s New Deal during the Great Depression. 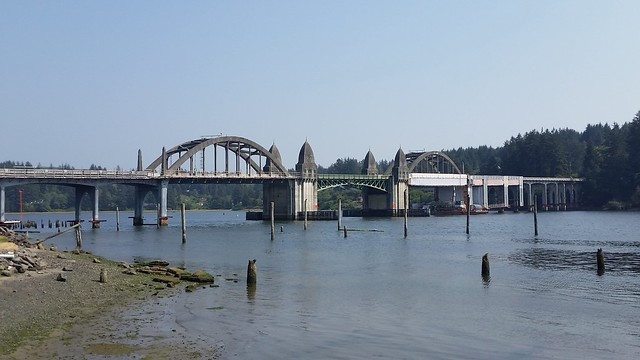 The drawbridge section is flanked by two 154 foot reinforced concrete tied arches.  Four Art Deco style obelisks house mechanical equipment as well as living quarters for the bridge operator.  An informational panel near the base of the bridge had a great photo of the bridge with Florence to the north. 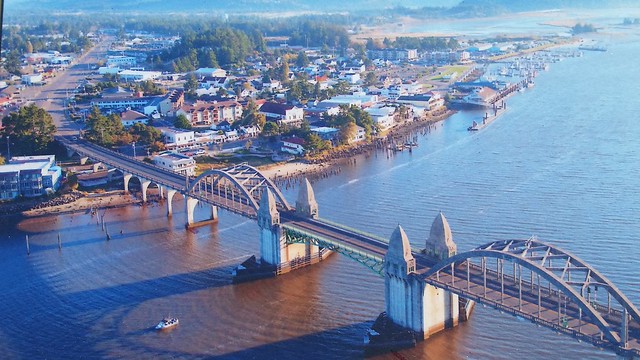 Florence is located on the north edge of the Oregon Dunes,  a unique area of windswept sand that is the result of millions of years of wind and rain erosion on the Oregon Coast. These are the largest expanse of coastal sand dunes in North America. 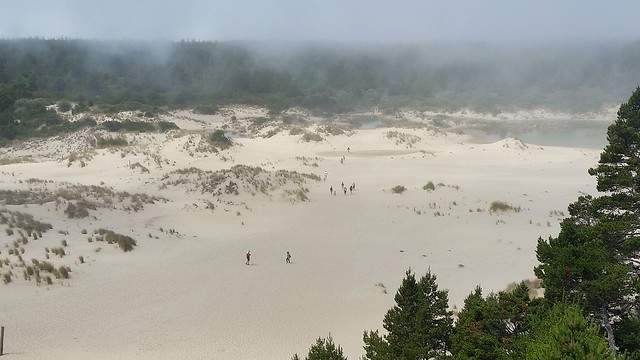 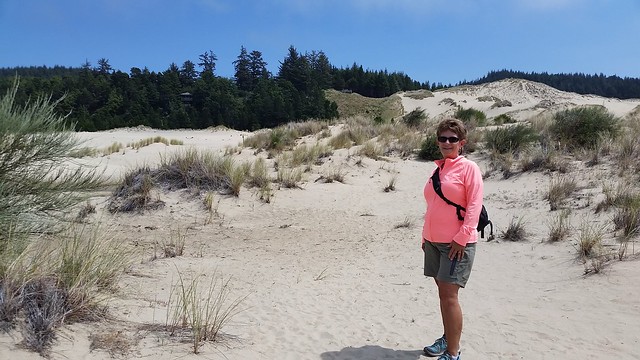 Woahink RV Park is located right on the edge of the sand dunes.  In fact, there is a narrow little road in the park that leads right up into the dunes, making it a popular park for four wheelers who come here to ride in the sand.   One afternoon we hiked up the hill to check out the view. 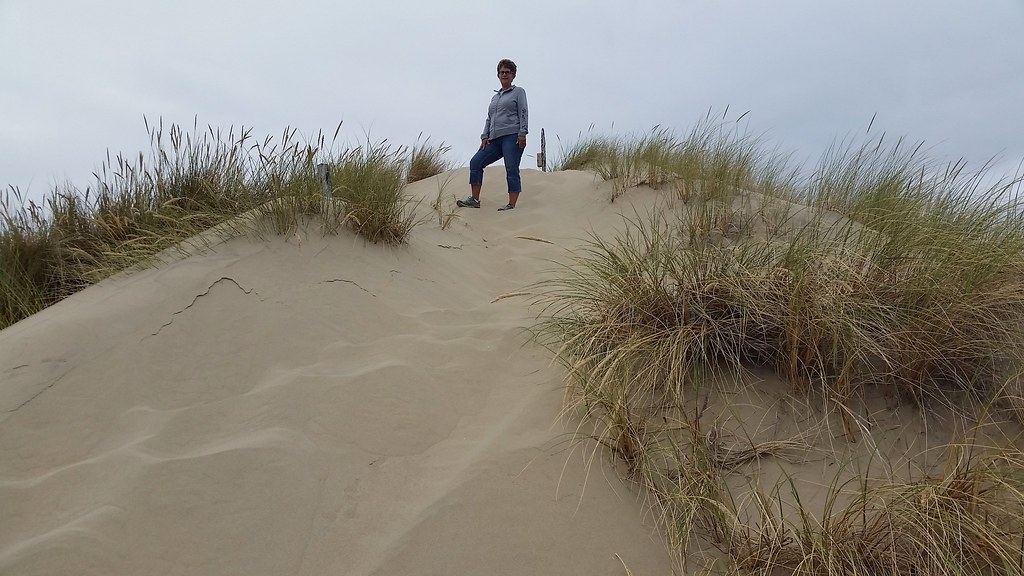 From the top of the hill, the view to the west is nothing but sand. 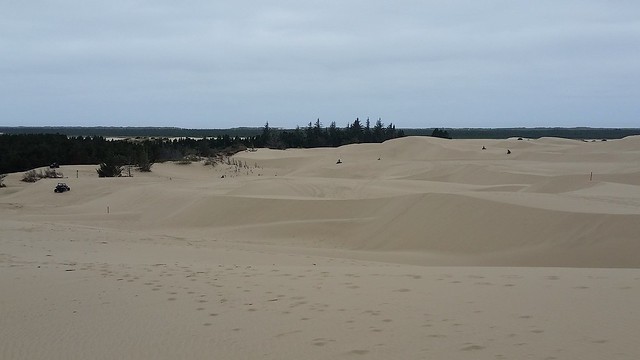 The small dots in the distance are four wheelers

To the east is a great view of  the RV park below and Woahink Lake beyond it. 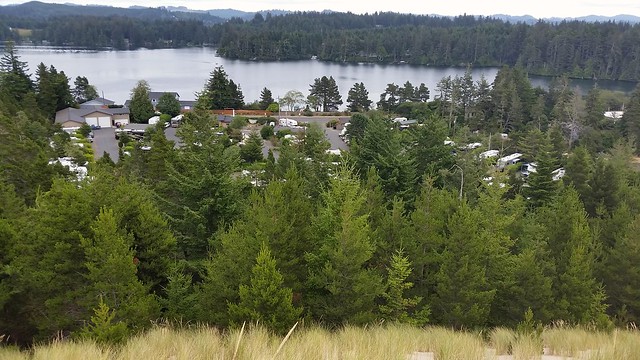 When we realized that our friends Hans and Lisa (Metamorphosis Road) were only about 50 miles south of us, we contacted them to see if they were interested in meeting up somewhere in between for lunch.  Lisa had an even better suggestion.  She was looking at a hike along Eel Lake, located right along US 101 almost exactly between our two locations.  Who could pass that up? 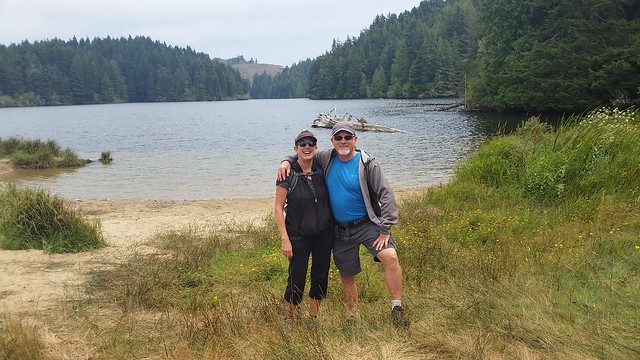 We met mid-morning near the boat ramp in William Tugman State Park and, after a bit of “how are things” conversation, we set out on the trail. 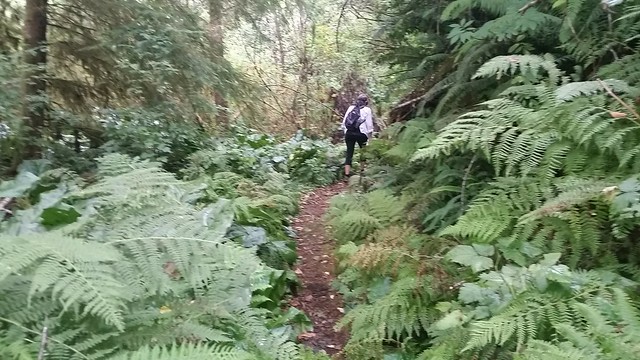 Lisa hikes through the thick forest

The trail is pretty flat, with a few up and downs, as it goes around about half of Eel Lake.  We hiked for a bit over three and a half miles before running out of trail and turning around.

The area around Eel Lake is classic coastal Oregon, with soaring trees above and thick ferns carpeting the ground.  Along the way we saw a variety of interesting things growing and crawling along the trail. 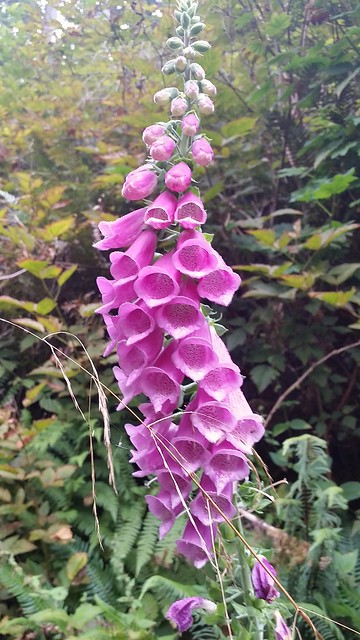 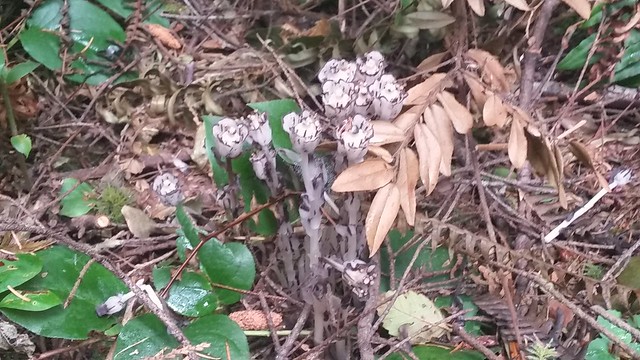 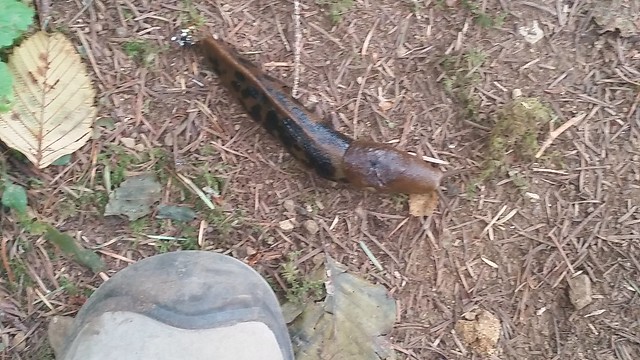 One of the many slugs 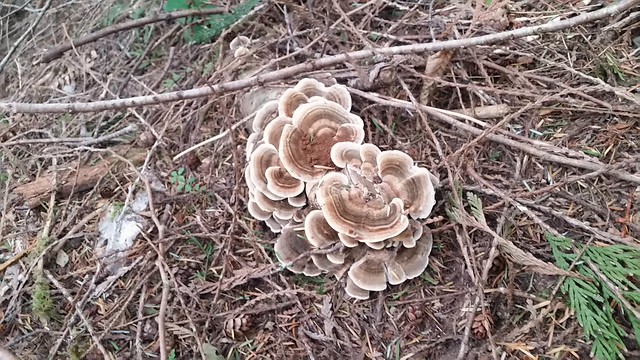 After returning to the parking lot, we said our good-byes to Hans and Lisa, knowing we will be crossing paths with them again in the near future.

Next up is some coastal hiking north of Florence.  More on that later . . .

20 Responses to Florence, Sand, and Hiking with Friends