Repairs and High Temps in Oregon

Posted on August 4, 2017 by placestheygo

We left Long Beach, WA on a clear Monday morning and headed south into Oregon.  Our first obstacle was the Astoria-Megler Bridge, a 4.1 span crossing the Columbia River. 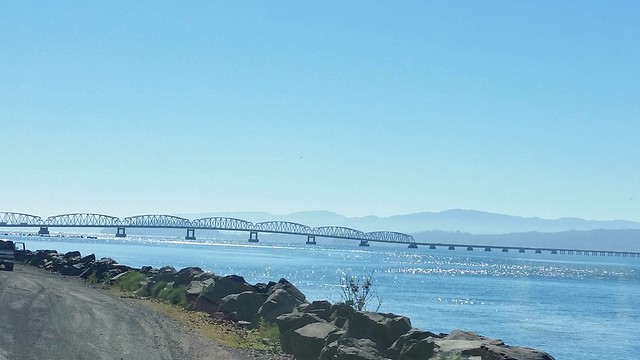 North half of the bridge

We crossed the bridge a few times in the Jeep during our stay in Long Beach so we knew each lane was of adequate width for the motorhome.  But if you have a fear of narrow bridges, crossing this one may cause you a bit of anxiety. 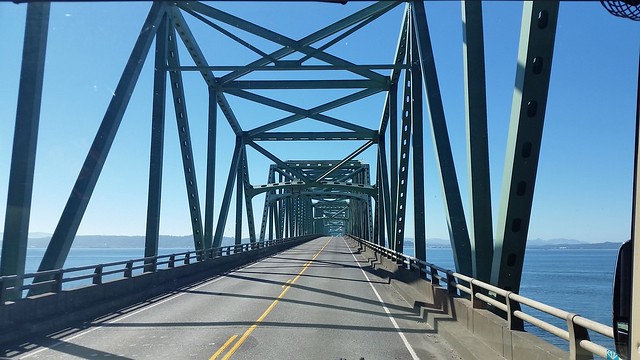 Driving through the truss section on the north side 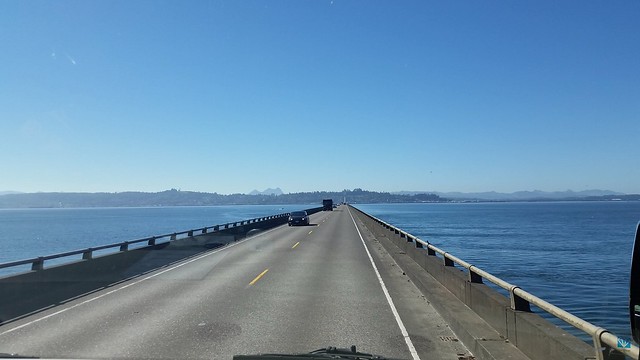 The middle section is flat and close to the water

The cantilever-span section on the south side goes up and over the main shipping channel, then steeply down into Astoria. 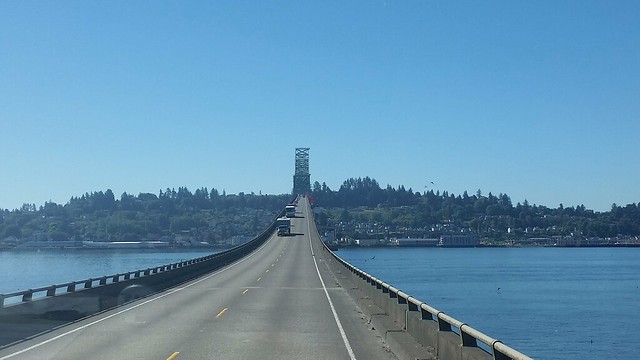 Repair work is being completed at the highest point, causing delays due to one lane being  closed.  We were stopped there for a few minutes, allowing us to enjoy the great views below us. 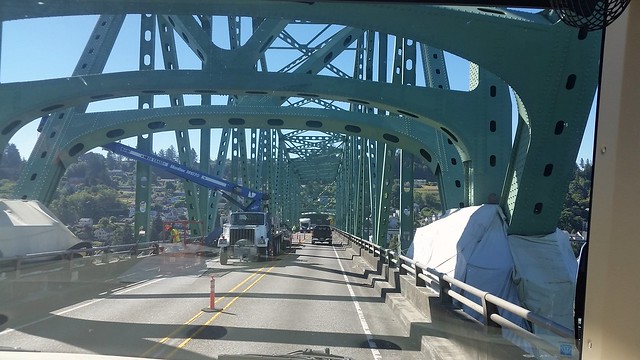 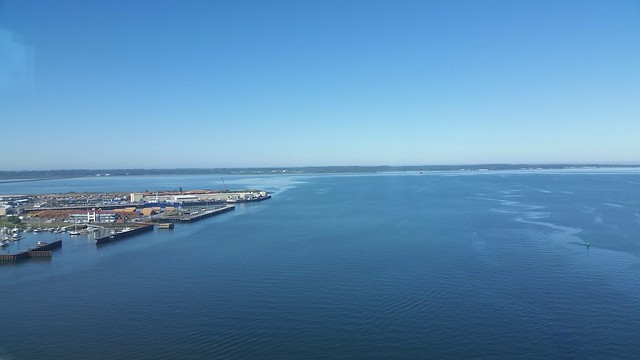 Looking west from the top of the bridge

After passing through the narrow streets of Astoria we continued east on OR-30 for about 50 miles.  As we came down a hill we could see our next challenge, the Lewis and Clark Bridge with Mt. St. Helen’s in the background.  We crossed back into Washington for just a few miles before joining I-5 and heading south into Oregon. 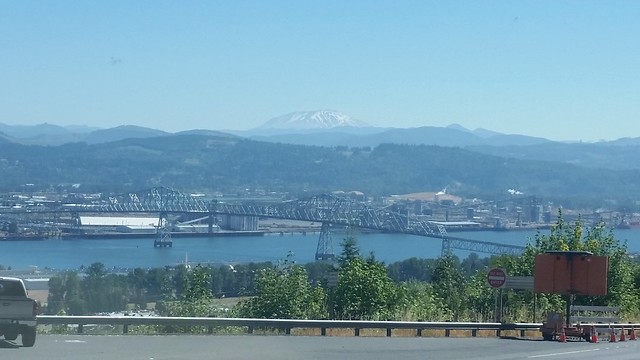 Once on I-5 it was a 150 mile drive to Coburg, just north of Eugene, where we had an appointment at Cummins Northwest to have the motorhome serviced the next day. 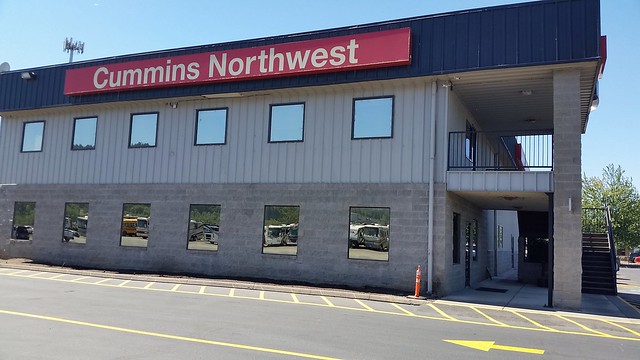 We went to Cummins for our service because they are the manufacturer of our engine.  We’ve been experiencing some overheating problems the past few months and feel they are the best people to deal with the problem.  They diagnosed a defective fan assembly (a known problem with engines similar to ours) and also found a leak in the exhaust manifold.  The service manager stated that the fan assembly has been a problem for years but the manufacturer of the part has recently improved the unit, correcting the problem.   The tech who did our service spoke with John and said that the exhaust manifold problem is not unusual for a motorhome.  Since the motor is in the rear of the motorhome surrounded by “stuff,” it doesn’t get the cool air flow of an engine located in the front of a vehicle.  Cummins is ordering the necessary parts, and we scheduled a return visit in two weeks to have the repairs completed. 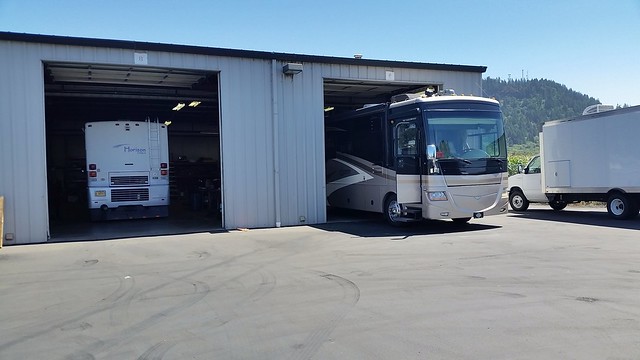 Central Oregon is currently in the middle of a record setting heat wave, with temperatures predicted to be over 100 for the next few days. 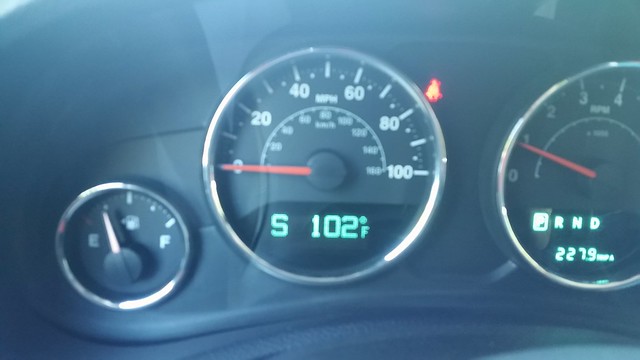 So after staying in the Cummins lot for the night, we headed west for the cooler temperatures along the coast.  OR-126 winds its way over the low coastal mountains for about 60 miles to the town of Florence. 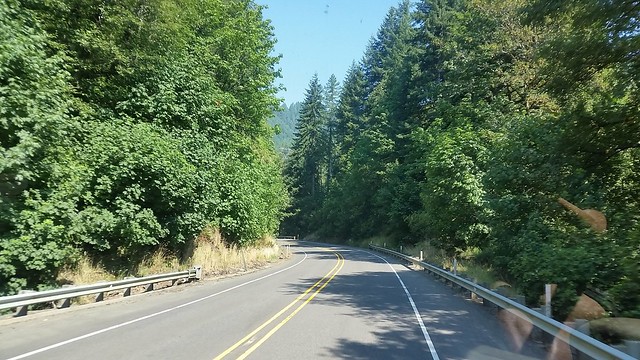 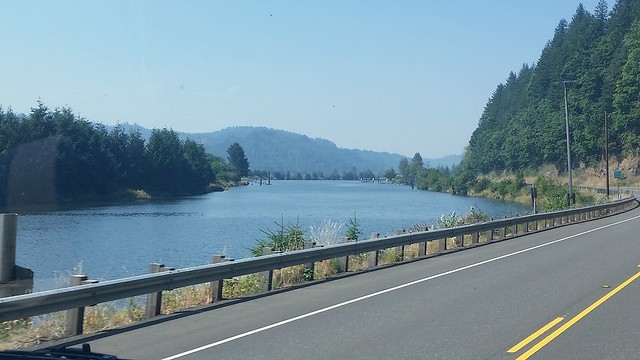 Siuslaw River near Mapleton, OR

In Florence OR-126 ends at the junction with US-101.  At that point we turned south and crossed the Siuslaw River on the historic Siuslaw River Bridge. 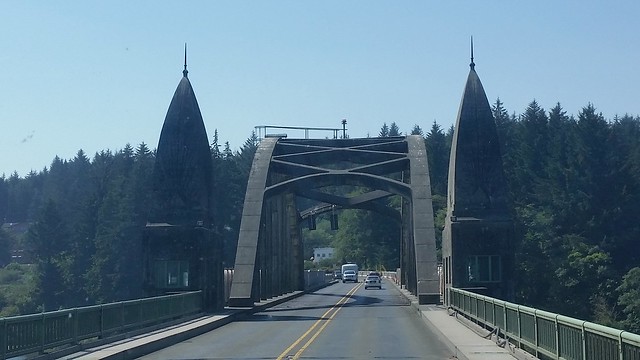 We were very fortunate to be able to find a spot in an RV park along the coast on such short notice.  Woahink Lake RV Resort, located about five miles south of Florence, had an opening, but we would have to move sites after the first night.  We were more than willing to do that to get a site for the next 12 days. 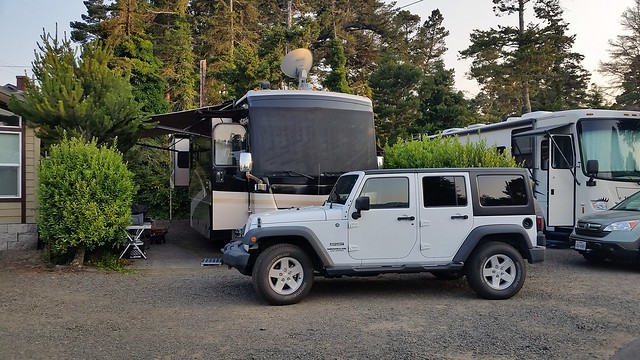 The sites here are a bit tight, but a hedge between each one gives you some privacy.  With temperatures in the high 60s we’re very happy to be here rather than in Eugene. 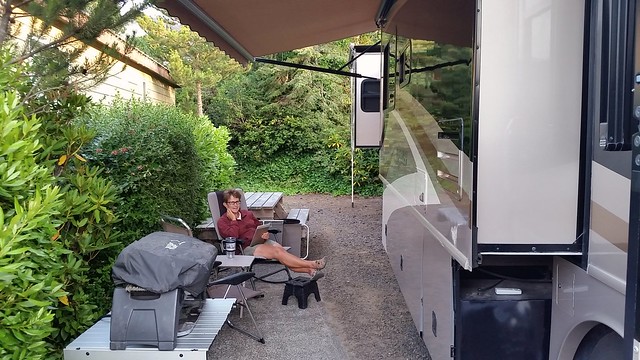 We’ll be staying here for about 12 days as we enjoy the cool temperatures while waiting for our repair appointment in Coburg.  The coast of central Oregon is very beautiful with lots to do and see so the time is sure to go by quickly!

13 Responses to Repairs and High Temps in Oregon