Cape Disappointment and a visit to Cannon Beach

Cape Disappointment is a narrow, rocky piece of land on the north side of the Columbia River at the point where it meets the Pacific.  Located in the extreme southwest corner of Washington, the cape was named in 1788 by British fur trader John Meares, who was sailing south from Vancouver Island in search of trade. After a storm, he turned his ship around just north of the Cape and therefore just missed the discovery of the Columbia River.  Today the Cape is home to Cape Disappointment State Park.  The park has a large campground, two lighthouses, and the Lewis and Clark Interpretive Center.  The center was our first stop when we visited the park. 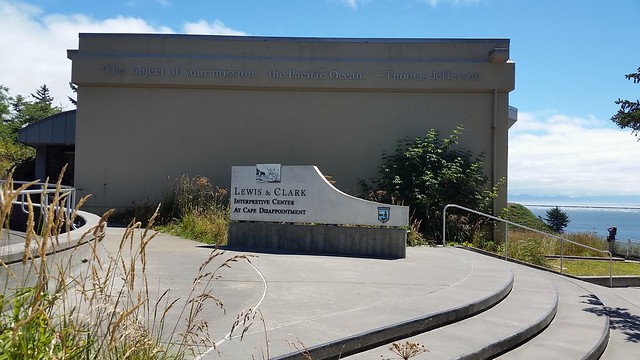 The interpretive center sits on a cliff right at the confluence of the Columbia River and the Pacific Ocean.  The first thing you notice when you walk up to the cliff is a very strong odor.  An information plaque there explains the source of the odor, but a look at the rocks below also identifies the cause. 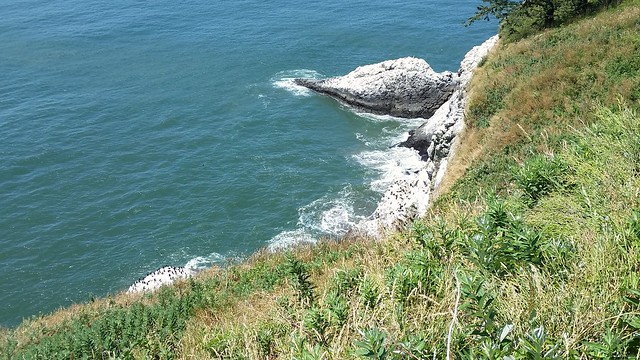 Shorebirds have “painted” the rocks below! 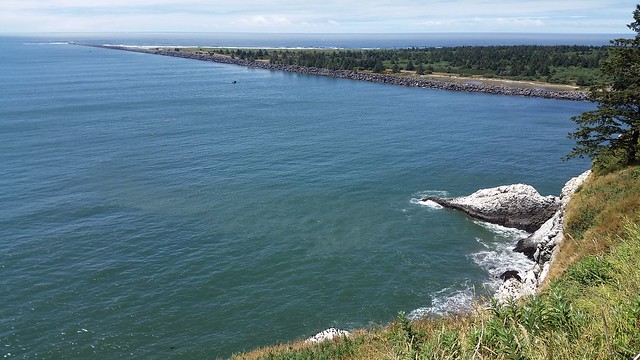 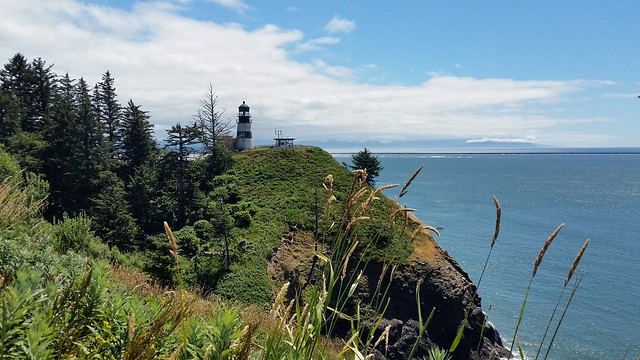 View looking south – Cape Disappointment Lighthouse in the foreground, the Oregon coast in the background

Lewis and Clark arrive in this area in November of 1805 and stayed about a month before crossing over to the south side of the river where they spent the winter. 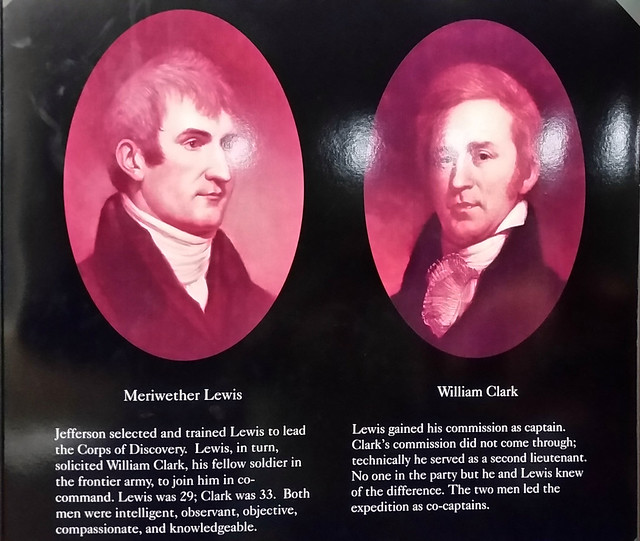 The interpretive center features exhibits that tell the story of the Corps of Discovery Expedition from St. Louis to the Pacific coast from 1803 to 1806 .  There are also displays about the park’s later history, including the lighthouses, U.S. Coast Guard and military activities, and the area’s maritime and natural history. 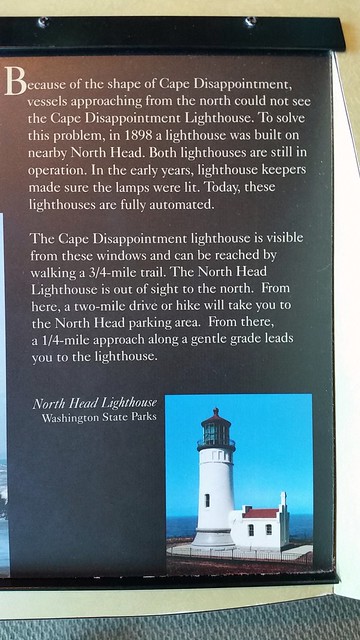 Why are there two lighthouses here?

After touring the interpretive center, we hiked the .75 mile trail to the Cape Disappointment Lighthouse. 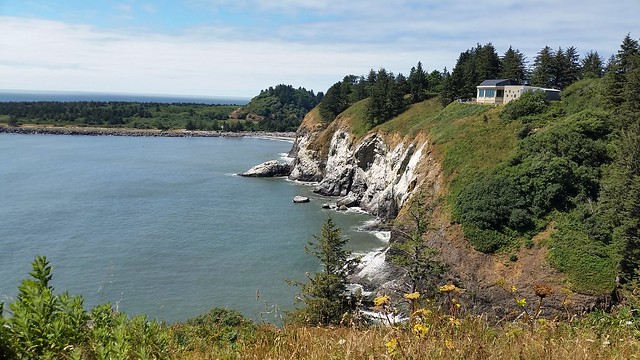 View of the Lewis and Clark Interpretive Center from the lighthouse

The lighthouse was constructed in the early 1850s.  When the first order Fresnel lens for the lighthouse arrived during construction, it was found to be too large for the tower. Rebuilding the tower took an additional two years. The first lighthouse in the Pacific Northwest was finally lit in October of 1856.  In addition to the light, the station was equipped with a 1,600-pound fog bell powered by a striking mechanism. 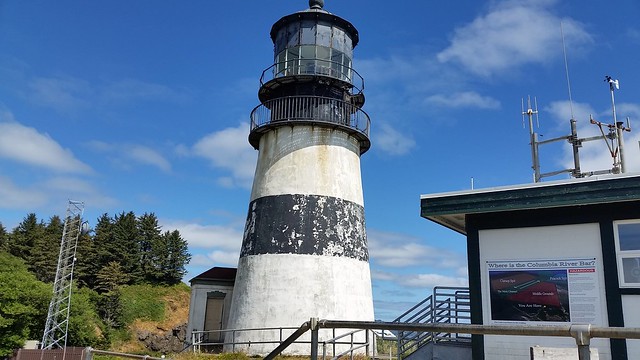 The lighthouse had several shortcomings. The fog bell was sometimes inaudible due to the roar of ocean waves. It was discontinued in 1881 and moved to a lighthouse near Seattle. Also, the light was not visible to ships approaching from the north.  This problem was corrected by building the lighthouse at North Head, two miles from Cape Disappointment. The first-order lens was moved to North Head and a fourth-order lens installed at Cape Disappointment. 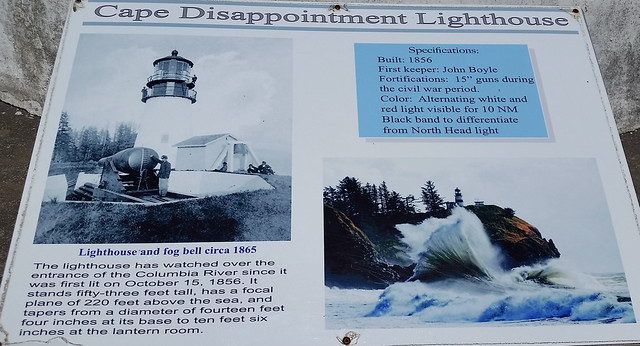 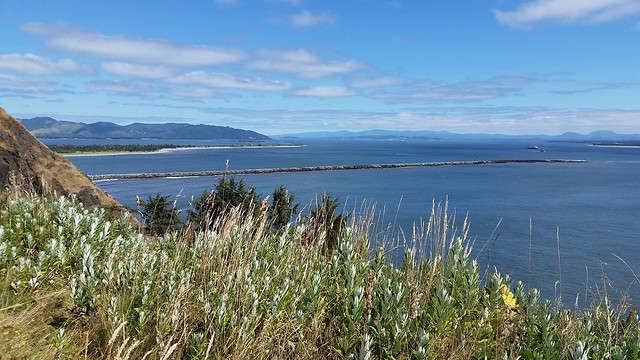 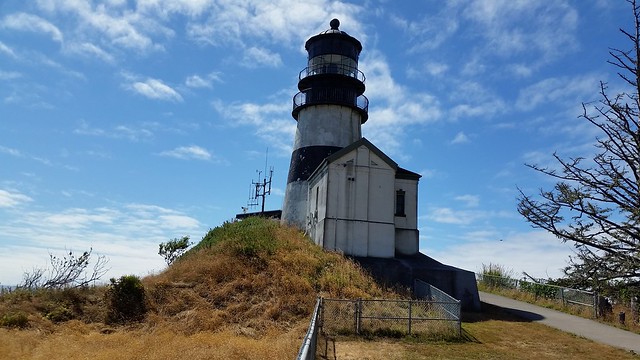 We returned to the Jeep and drove north through the state park to visit the North Head Lighthouse.  As we walked the path to the lighthouse we passed the information plaque shown in the photo below.  The plaque contains a photo take at that spot in 1917 before the jetties on both sides of the river were constructed.  Ocean currents were altered by the jetties, causing a buildup of sand along the shore and creating over 600 acres of new land. 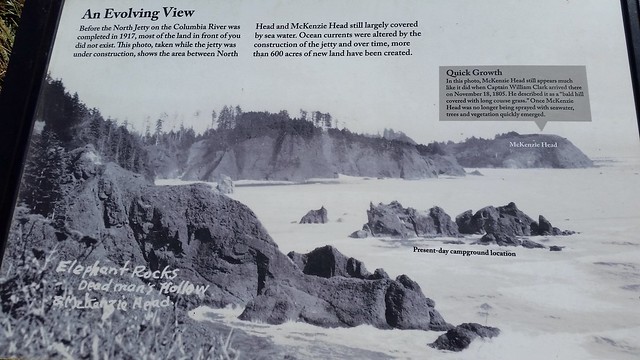 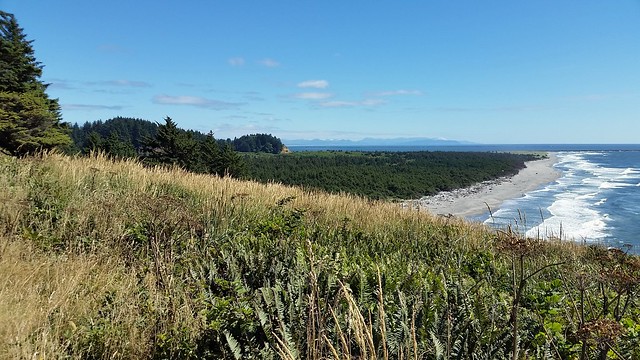 The North Head Lighthouse is usually open to tour, but we knew that it is currently closed while renovations are completed. 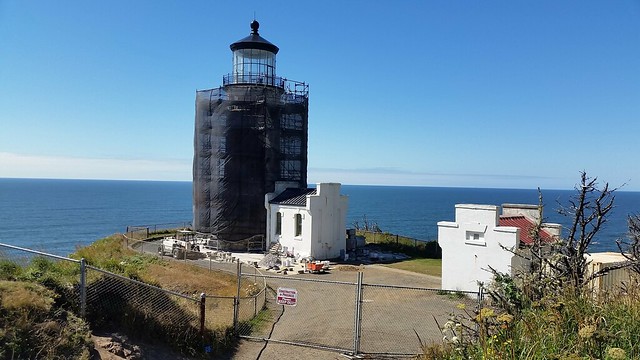 The day after our visit to Cape Disappointment we decided to cross the Columbia River and drive down the Oregon coast for a visit to Cannon Beach, home of the famous Haystack Rock, a 235 foot tall sea stack. 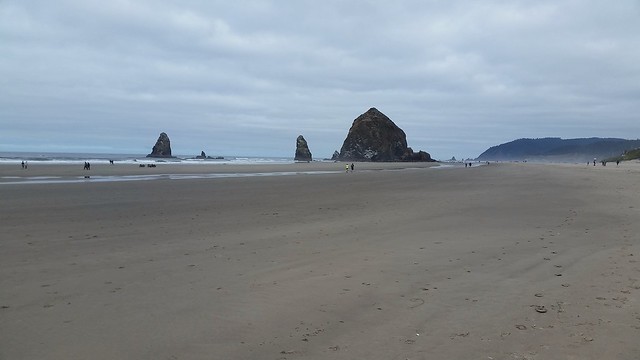 We timed our visit to low tide, so rock formations under water at high tide exposed numerous tide pools filled with sea life. 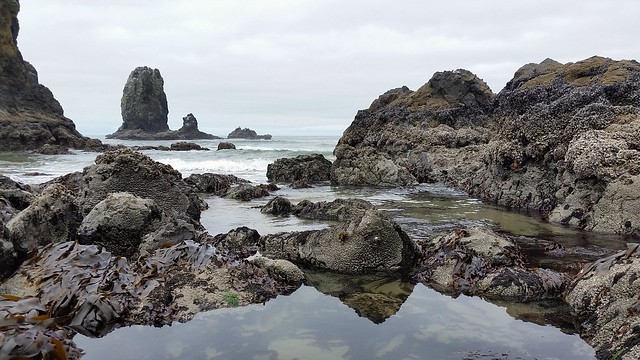 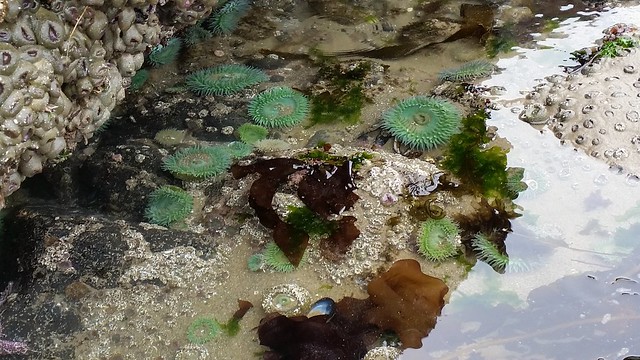 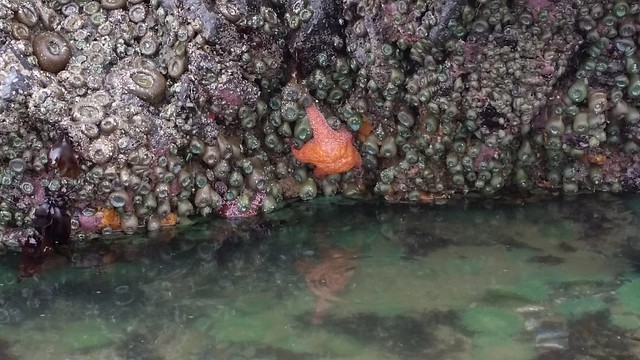 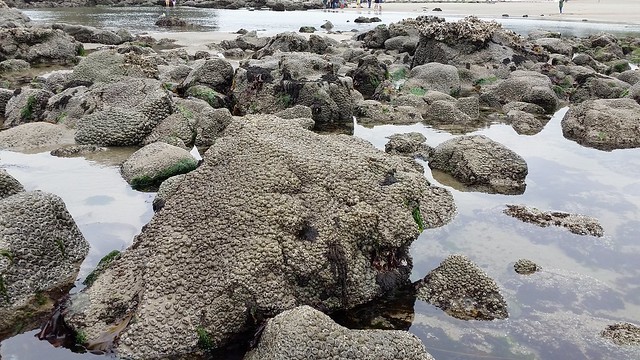 A blanket of anemones 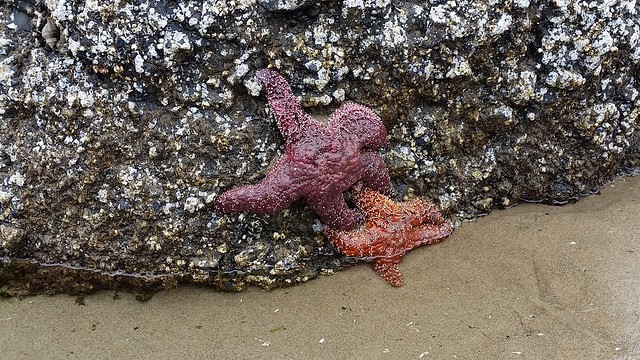 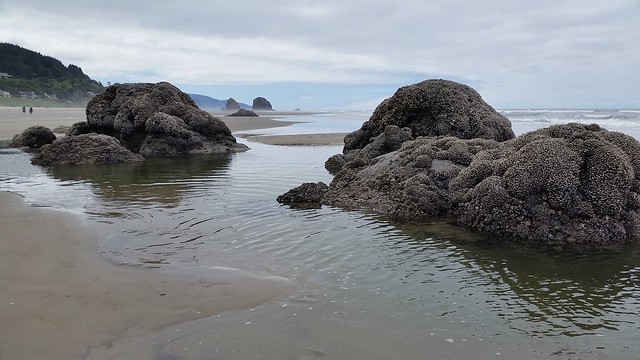 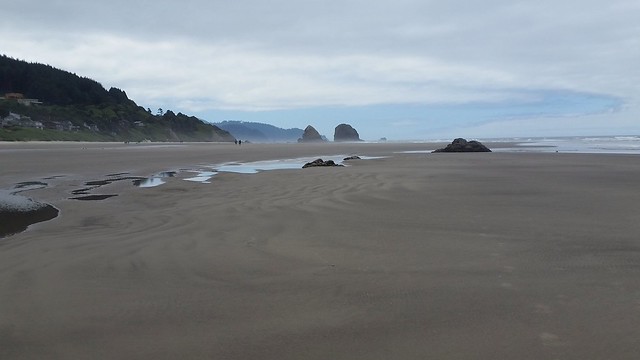 View to the south

Well, that concludes our six week visit to western Washington.  We have certainly enjoyed our visit, but it is time to head south.  Today we’ll cross the Columbia River and head to Coburg, OR, just north of Eugene, where we have an appointment to have the motorhome serviced.   We had planned to stay in the Eugene for a week until we checked out the weather report for the area.

After six weeks along the cool coast of Washington, we are just not able to comprehend temperatures of 109!  So once the service on the motorhome is completed, we will head back to the coast for a week in Florence, OR, where the highest temperature for the week is one day at 80 degrees and low 70’s and 60’s the rest of the time. 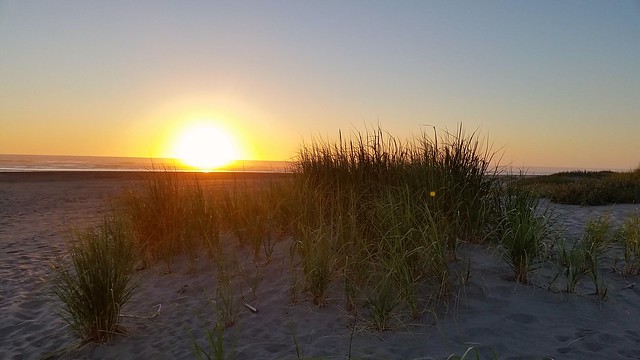 14 Responses to Cape Disappointment and a visit to Cannon Beach