A Visit to Astoria, OR

Astoria is a city of just under 10,000 located on the south shore of the Columbia River.  Situated near the mouth of the river where it meets the Pacific Ocean, the city was named after John Jacob Astor, an investor from New York City whose American Fur Company founded Fort Astoria at this site in 1811.  It is connected to Washington by the  the 4.1 mile Astoria–Megler Bridge.

Since Astoria is only 22 miles from our RV park, we headed there one morning for a visit.  But after crossing the bridge we first turned west and drove 10 miles to Fort Stevens State Park to check out the remains of the ship Peter Iredale, apparently a must do tourist stop in this area.  Peter Iredale was a four-masted steel barque sailing vessel that ran ashore in 1906 (no casualties).  Wreckage is still visible, making it a popular tourist attraction. 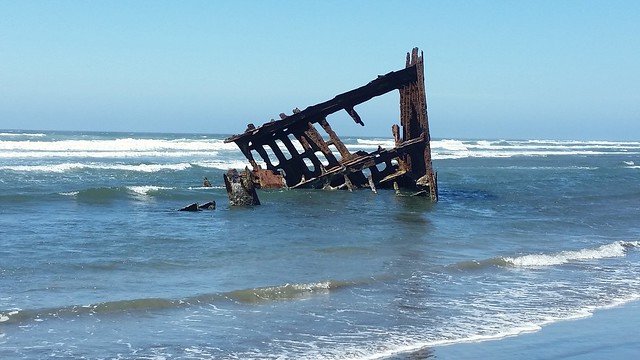 Wreckage of the Peter Iredale

We returned to Astoria and drove up on a hilltop southeast of town to visit the Astoria Column, another must do tourist stop.  The tower was built in 1926 with financing by the Great Northern Railway and Vincent Astor, the great-grandson of John Jacob Astor, in commemoration of the city’s role in the family’s business history.  The 125 foot column has a 164 step spiral staircase ascending to an observation deck at the top. 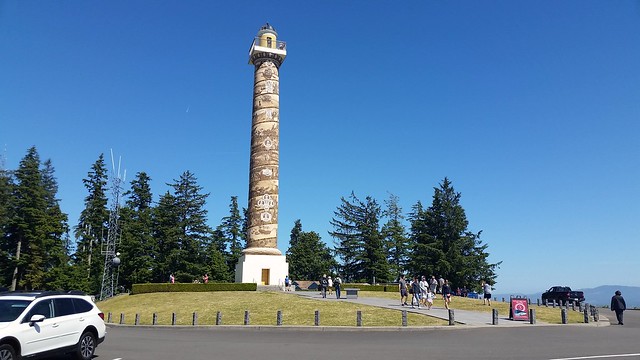 The murals that make up the column were refurbished in 1995 and a granite plaza was added in 2004. 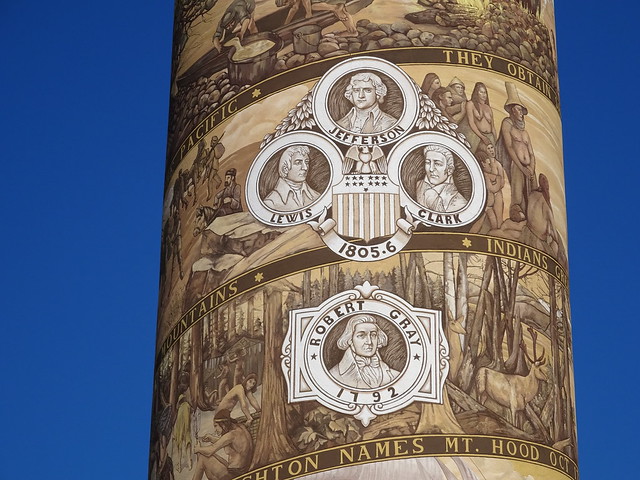 The observation deck gives you a great view of Astoria and the bridge to Washington. 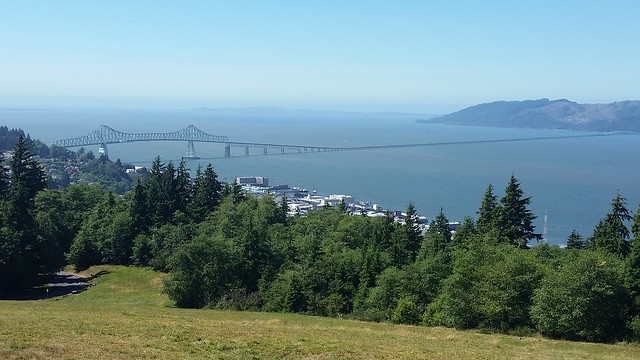 As we drove down from the column we noticed two deer enjoying lunch in a neighborhood front yard. 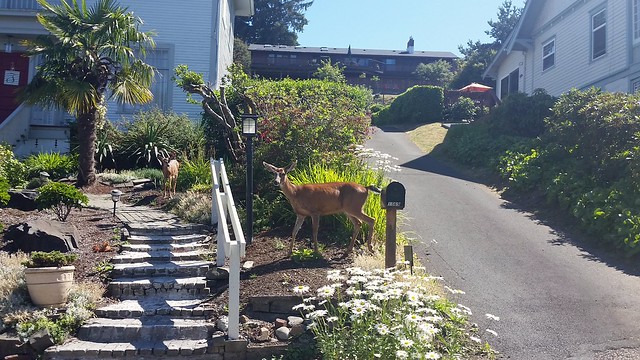 Astoria is built into the side of a steep hill, so the drive up and back from the column reminds you of driving in San Francisco. 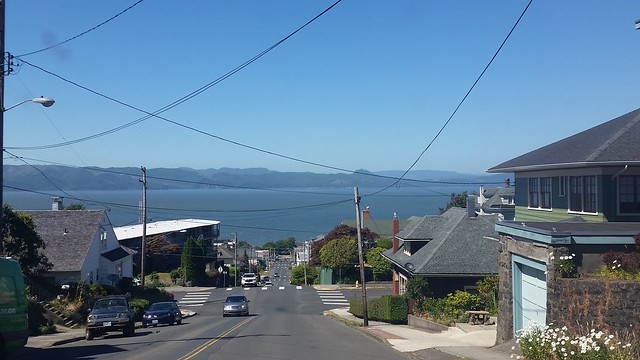 We parked along the river and walked a few blocks to the Fort George Brewery to enjoy an adult beverage and some lunch. 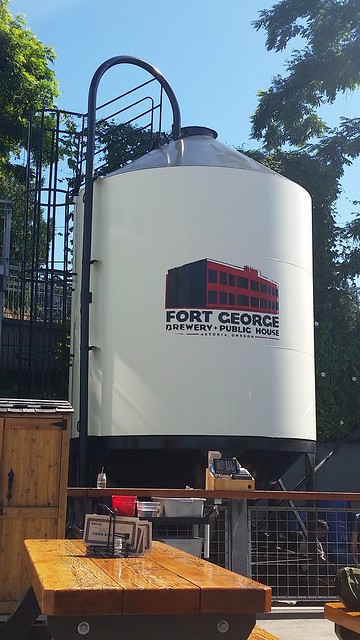 The Burnt Umber Brown Ale was delicious, as was the chowder and the fish and chips.  We had never had fish and chips made with tuna and found it to be outstanding! Originally, we planned to try Bowpicker  (recommended by many) but found they are closed on Monday and Tuesday. 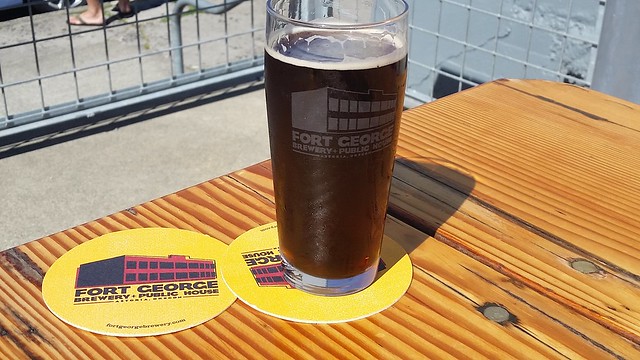 The usual strong afternoon wind was blowing in from the west and we found it interesting to look up river and see cargo ships all lined up at anchor facing into the breeze. 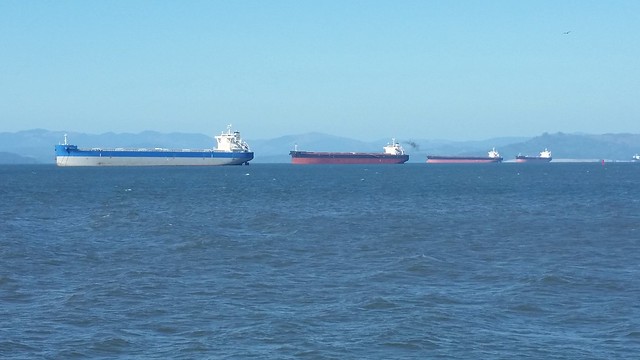 We walked along the Astoria Riverwalk, a paved path that runs the length of the river, giving great views of the Columbia River and the bridge to Washington. 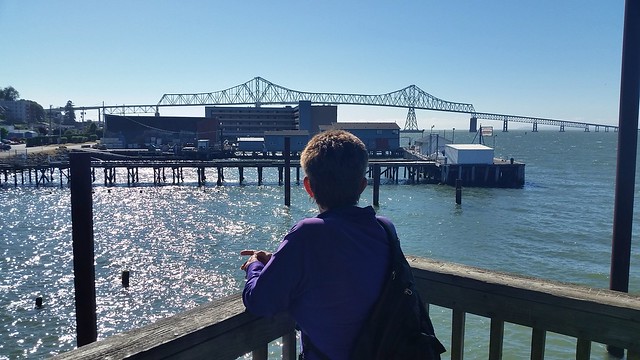 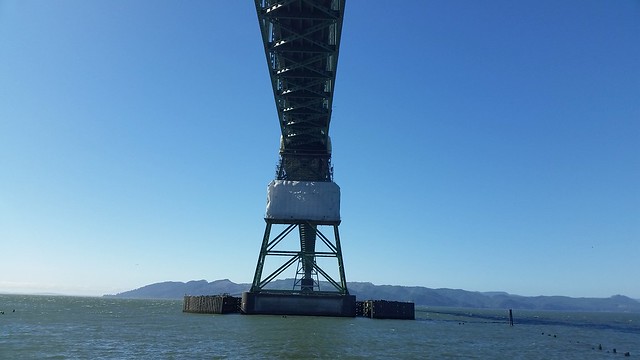 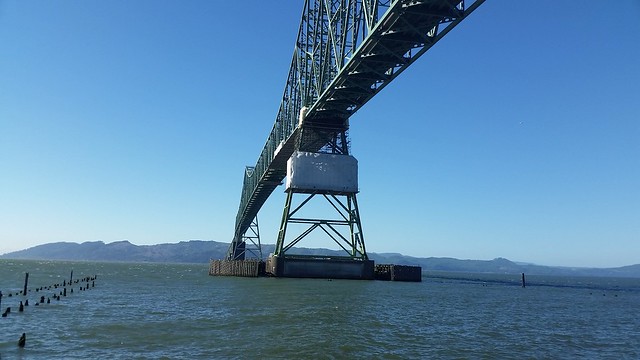 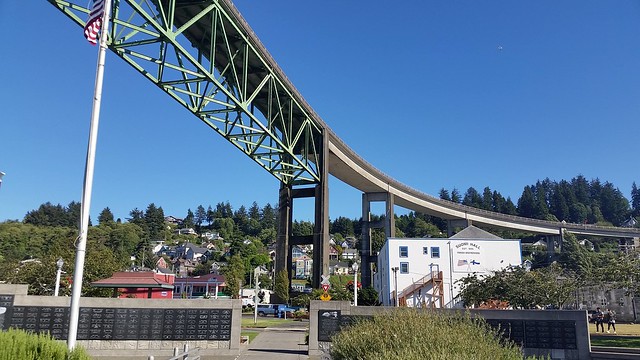 Sweeping turn where bridge traffic drops down to street level

Years ago much of Astoria was built out over the river.  In 1883, and again in 1922, the downtown was devastated by fire, partly because it was mostly wood and entirely raised off the marshy ground on pilings.  Even after the first fire the same format was used and the second time around the flames spread quickly again, as collapsing streets took out the water system. Frantic citizens resorted to dynamite, blowing up entire buildings to stop the fire from going further.  All along the waterfront old pilings are evidence of the city’s history. 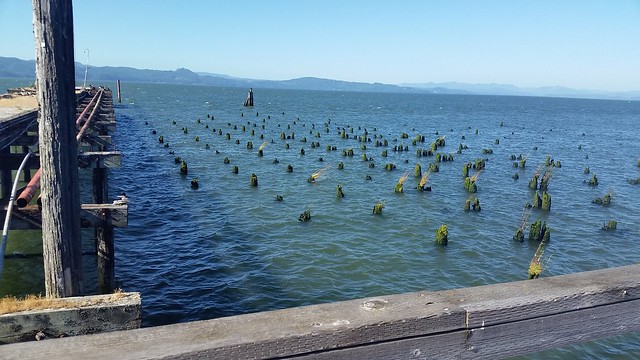 One of the most prominent buildings in the city is the John Jacob Astor Hotel.  Formerly called the Astoria Hotel, it opened in 1924 and initially was the city’s social and business hub  But it was soon beset with a variety of problems and struggled financially for years.  Condemned by the city for safety violations in 1968, it reopened as an apartment building in 1986 with the lowermost two floors reserved for commercial use. 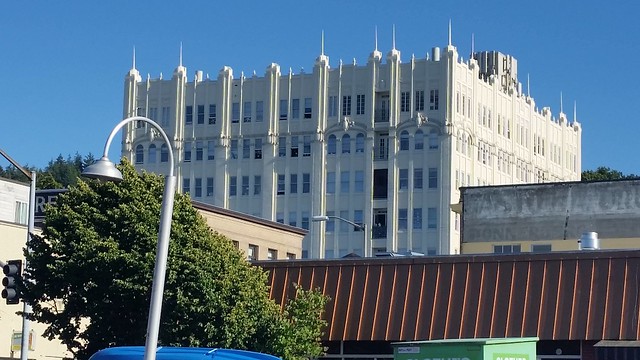 Astoria is an interesting town with enough to see to warrant a visit.  If interested in Lewis and Clark, a reconstructed Fort Clatsap, where the Corps of Discovery spent a winter, is just a few miles to the west.  We toured the fort during a visit years ago so we skipped it this trip.

Next up is a visit to Cape Disappointment State Park at the southern tip of the Long Beach Peninsula.  More on that later . . .

18 Responses to A Visit to Astoria, OR