One day during our stay in Forks we drove about 60 miles to the north for a visit to Cape Flattery, the northwesternmost point of the contiguous U.S. where the Strait of Juan de Fuca joins the Pacific Ocean.  It is part of the Makah Reservation, where a tribe of native Americans have lived for centuries.  Today most of the 1,600 Makah in the country live on the Reservation.  Their main tribal income is from forestry.  The largest community in the reservation is Neah Bay, with a population of 865.  We stopped there to visit the Makah Cultural and Research Center. 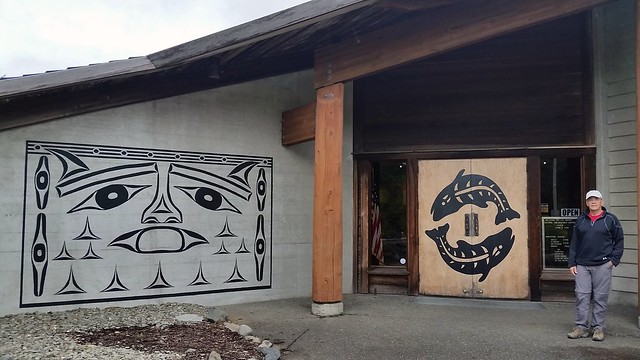 The museum interprets and houses 300-500 year old artifacts recovered from the Ozette Archaeological Site.  In the winter of 1969-1970 a storm caused the bank at the nearby Ozette village to slump, exposing hundreds of perfectly preserved artifacts.  A hiker contacted the Makah Tribe, the Tribe phoned Washington State University, and in April 1970, some two months after the storm, excavation of the Ozette Archaeological Site began.

Makah oral history told of a “great slide” which buried a portion of Ozette long ago. Archaeologists collaborating with the Tribe proved this oral history correct.  Radiocarbon dates demonstrated that a slide some 500 years ago buried six longhouses and their respective contents, locking the wooden and wood-based artifacts in a shroud of mud.  The 11 year excavation of the site produced over 55,000 artifacts which the Tribe kept on the reservation, with many on display at the museum.  Unfortunately, photography is prohibited in the museum, but we found it to be a very interesting place to visit.

After touring the museum we drove another nine miles to the parking area for the Cape Flattery Trail.  A .75 mile trail made up of boardwalks, stairs, and dirt sections leads down 200 feet to an overlook. 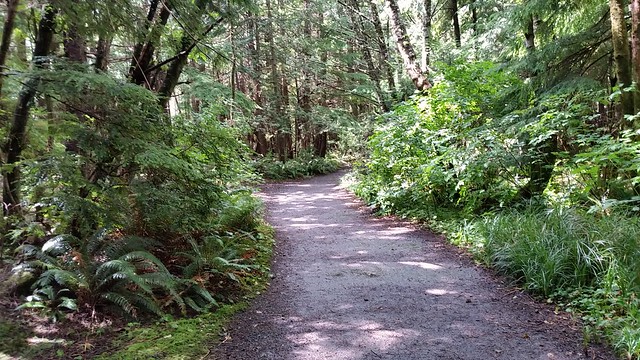 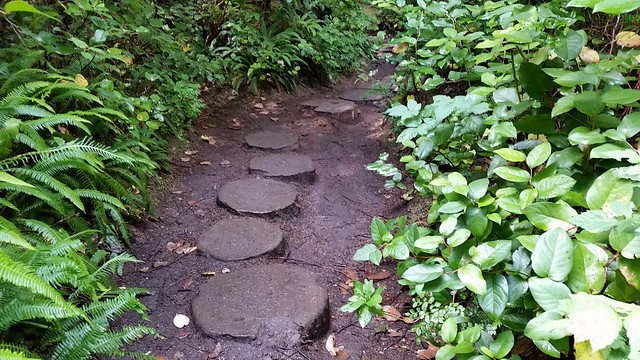 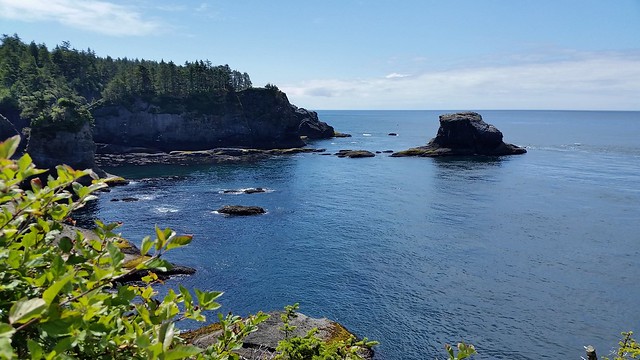 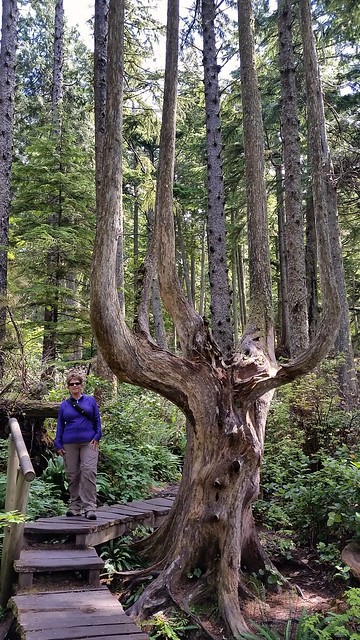 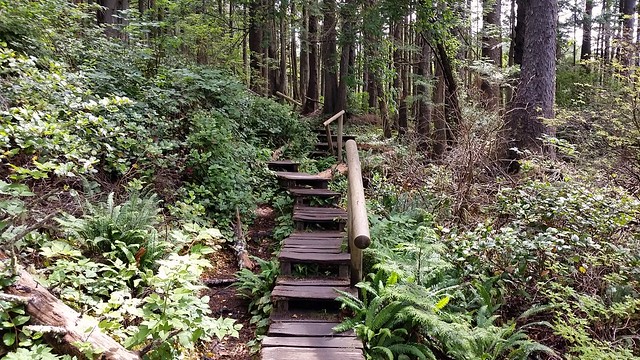 From the viewpoint at the end of the trail we had a scenic view of Tatoosh Island a half mile to the west.  Historically, Tatoosh Island was inhabited seasonally by Makah fishing camps and employees of the United States Coast Guard, Weather Bureau, and Navy. Currently no one lives on the island.  Access to it requires written permission from the Makah tribe. 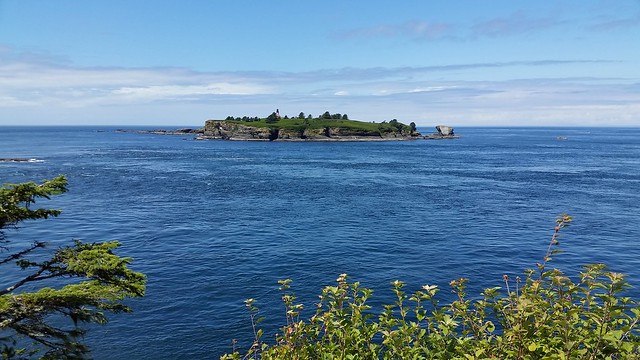 Tatoosh Island has been home to Cape Flattery Light, which overlooks the entrance to the Strait of Juan de Fuca, since 1857.  The lighthouse’s light was decommissioned in 2008  after a 30 foot skeletal structure with a solar powered beacon fitted with six-year solar pack batteries was built on the island.  A year later the island was returned to the control of the Makah Tribe, while the Coast Guard has access to maintain the light. 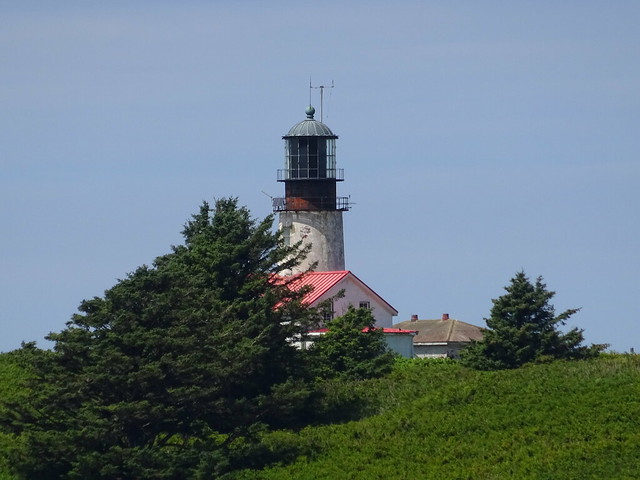 On both sides of the point are caves eroded into the sides of the cliffs.  We could hear sea lions barking inside one of them. 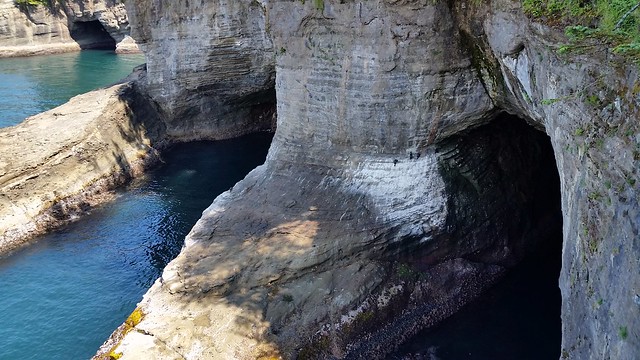 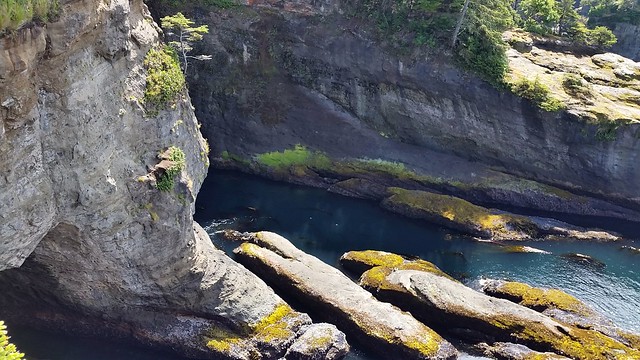 The cape has a number of observation decks that have wonderful views of the shoreline. 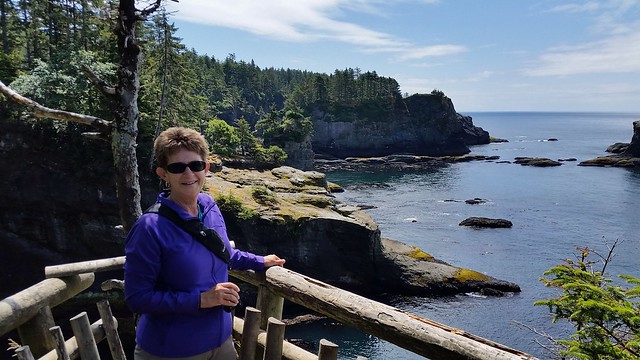 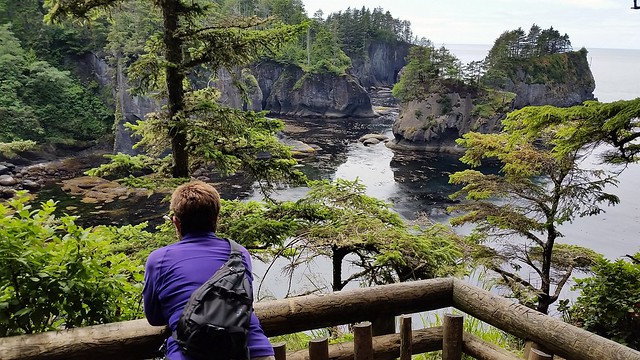 On the drive back through Neah Bay we stopped to take a look at the local high school.  Although it is a small school (173 students grades 6-12), the buildings are very colorful. 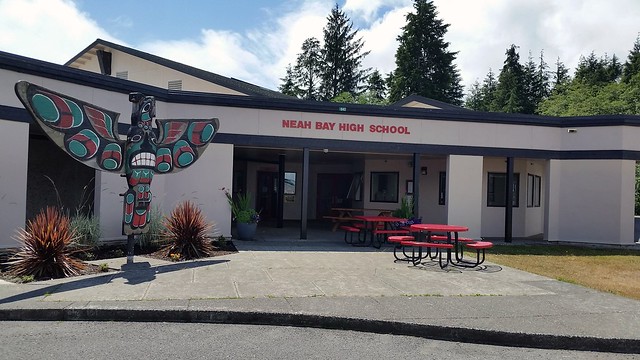 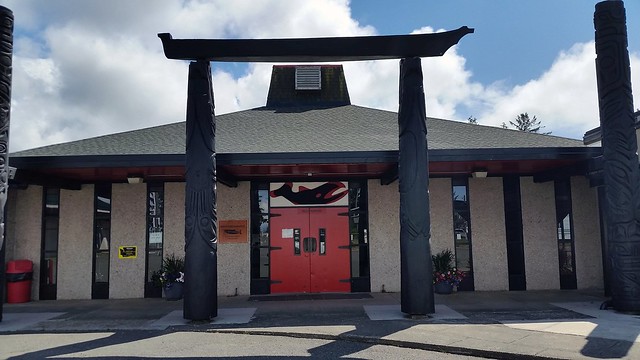 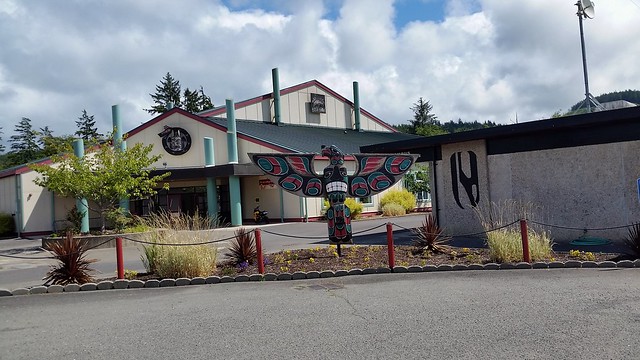 With the end of our visit quickly approaching we decided to take one more hike into the nearby rainforest.  We learned about the Bogachiel Rainforest Trail from Hans and Lisa (Metamorphosis Road), who hiked it during a visit here a couple of years ago.  The trail sounded interesting so we decided to check it out.  To access the trail we drove south of Forks about five miles on US 101 and turned east on Undi Road.  The trailhead was suppose to be five miles back on this road, but after three miles we came to a Road Closed sign with an arrow directing us to turn left on the the Undi Bypass.  This 1.5 mile gravel road was recently completed to relocate a section of Undie Road that was heavily damaged by overflow from the Bogachiel River in November 2015.

After following the bypass up a steep hill and back down again we returned to the old road and drove the last two miles to the trailhead. 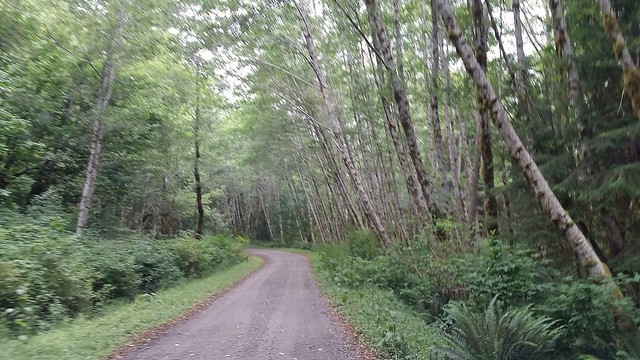 There was only one car parked in the trailhead parking area at the end of the road, just the kind of place we like. 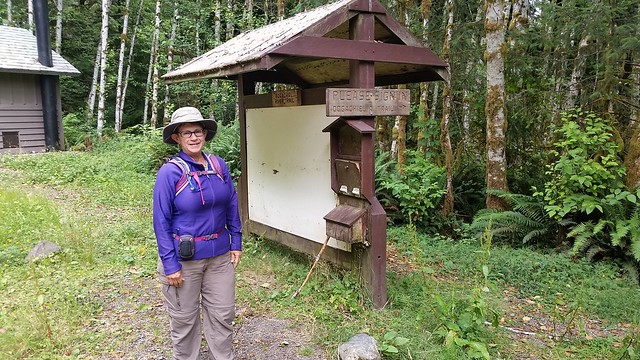 The Rainforest Trail immediately drops down a steep bank by way of some switchbacks for about 150 feet, where it levels off as it enters the rainforest.  There was just a thin cloud cover blocking the sun, giving the forest an eerie glow as we hiked under moss covered trees. 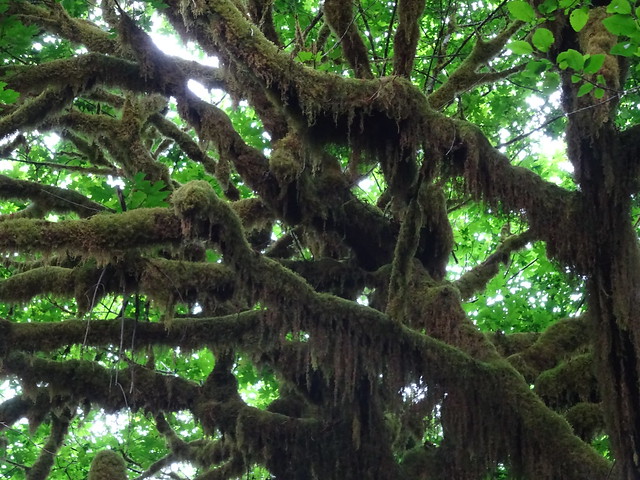 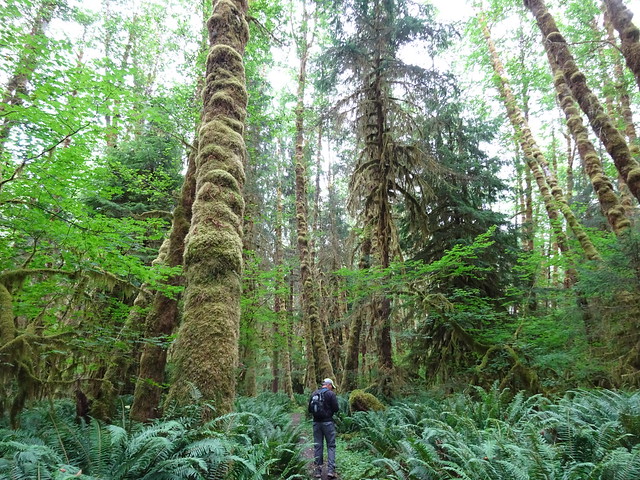 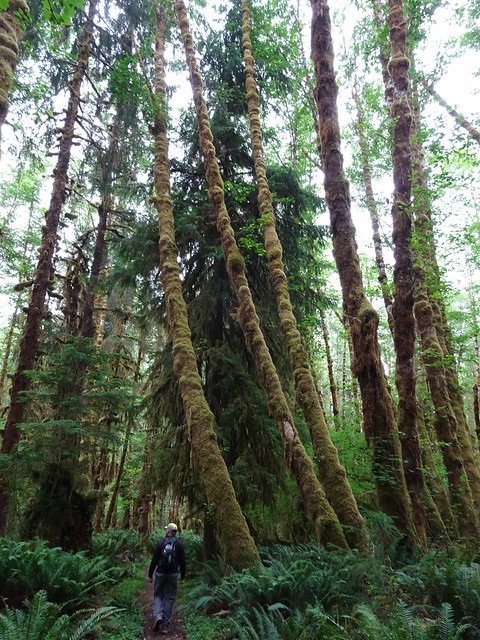 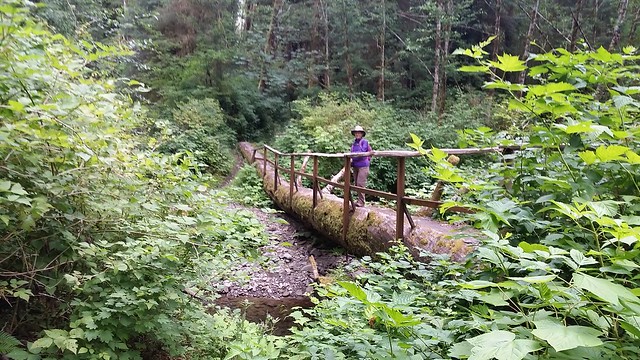 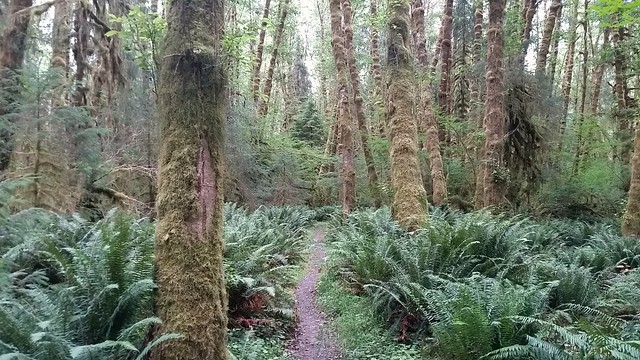 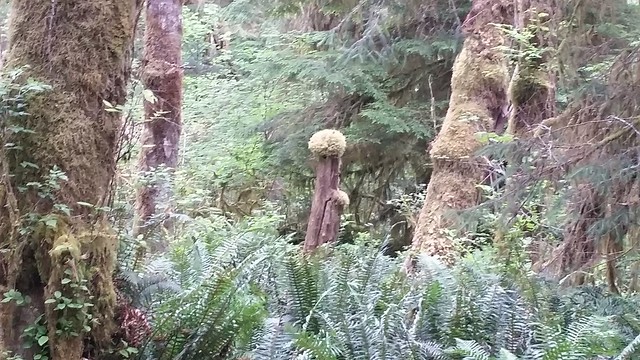 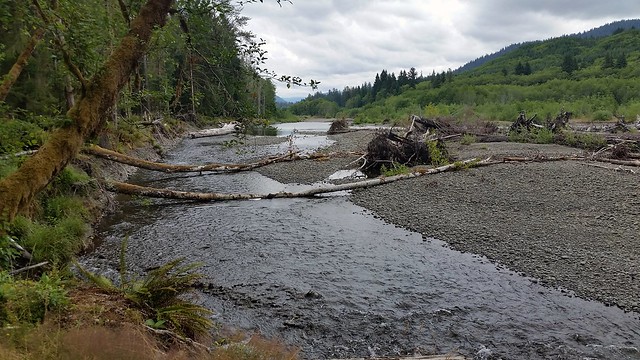 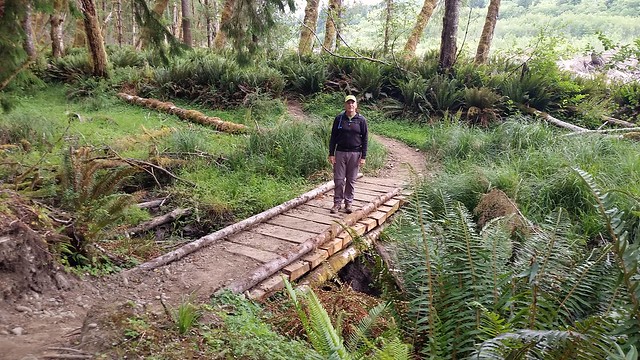 One of many small stream crossings 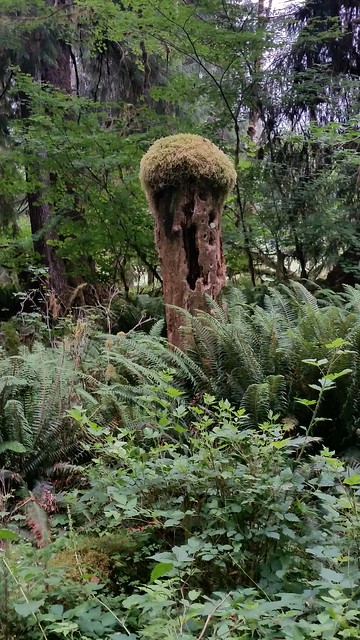 Another great head of hair 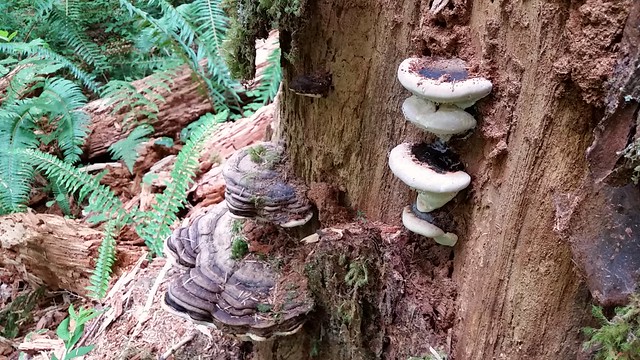 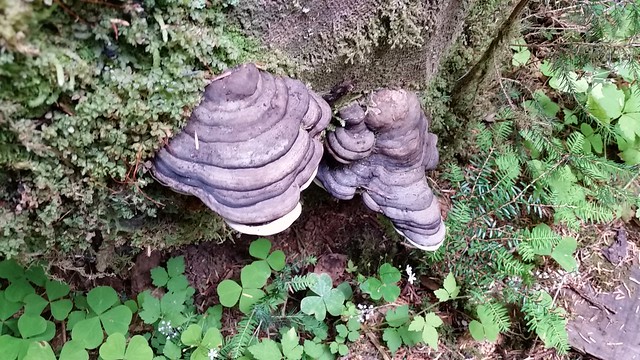 After about 1.5 miles on the Bogachiel River Trail, which continues on for 24 miles, we turned left on to the Ira Spring Wetland Trail and made a loop back to the River Trail. 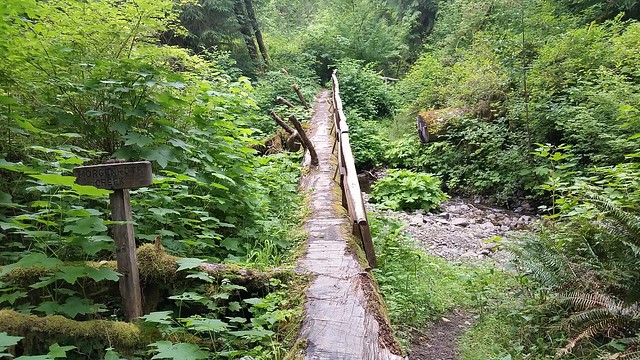 Back across the Morgenroth Creek

What an amazing five weeks we have had visiting the Olympic Peninsula and Olympic National Park.  We couldn’t have asked for a more perfect experience with wonderful weather.  We checked everything off our list and more.  Next up for us is a visit to Long Beach in the southwest corner of Washington State.  More on that later . . .

13 Responses to Cape Flattery and the Bogachiel Rain Forest Trail