Our friends, Eric and Laurel, recently moved to their summer spot on Lopez Island, one of the San Juan Islands.  They spend two months there each summer as volunteers conducting nature programs at Spencer Spit State Park.  We had a visit to the San Juan’s on our list of places to see, so when they invited us to visit them for a tour of Lopez, we quickly accepted.   While the island is only about 30 miles away for a bird, the trip for us was a bit longer.

We needed to take two ferries, so schedule coordination was important.  The first ferry was from Port Townsend to Coupeville on Whidbey Island.  We made a reservation on the first ferry of the day (6:30 AM) which required us to be at the terminal by 6:00.  Since Port Townsend is 40 miles from us, we were up and out the door very early. 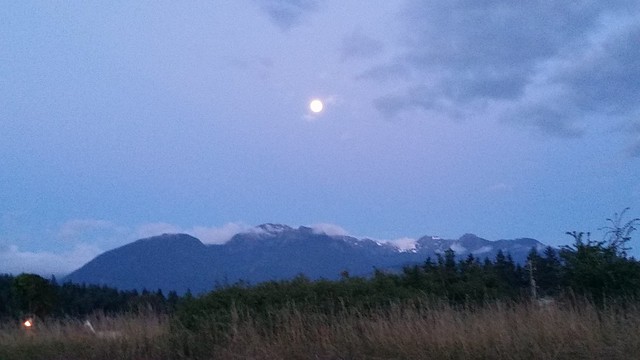 The moon over the Olympic Mts. before sunrise

As we drove east toward Port Townsend we enjoyed a great view of a golden sunset.  Then it dawned (pun intended) on us that sunsets only occur at the end of the day.  A quick Google search informed us that beautiful scenes like this also often occur first thing in the morning.  Who knew! 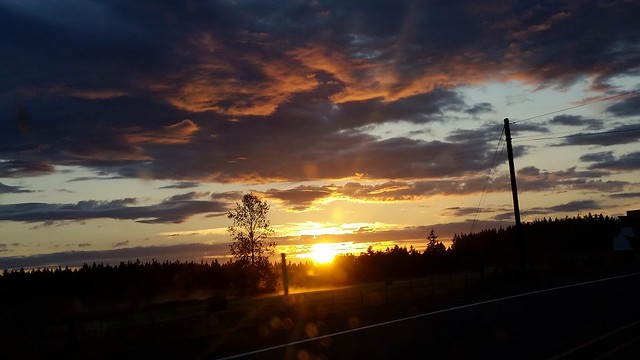 We arrived at the terminal right on time and, after a brief wait, drove on to the ferry and settled in for the 30 minute crossing. 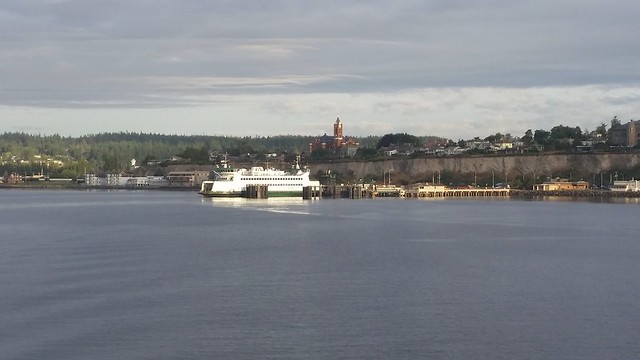 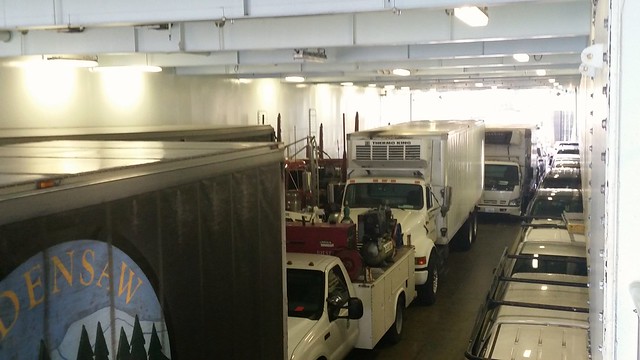 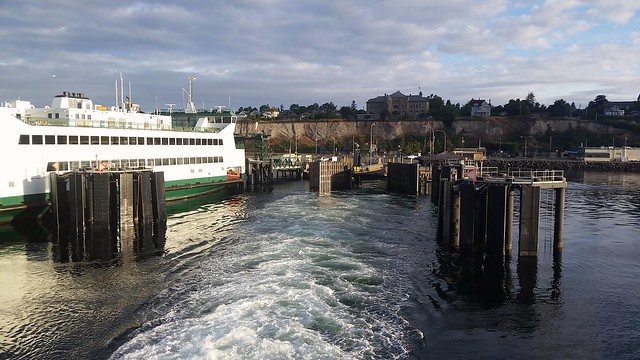 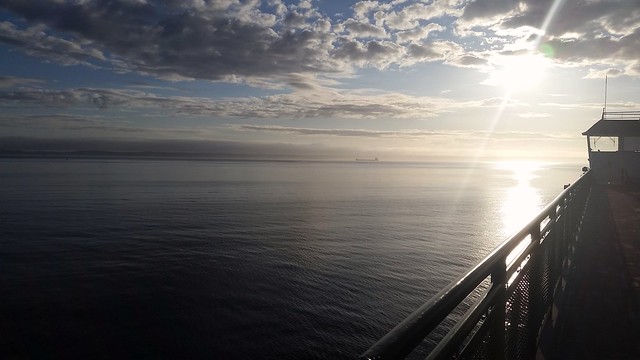 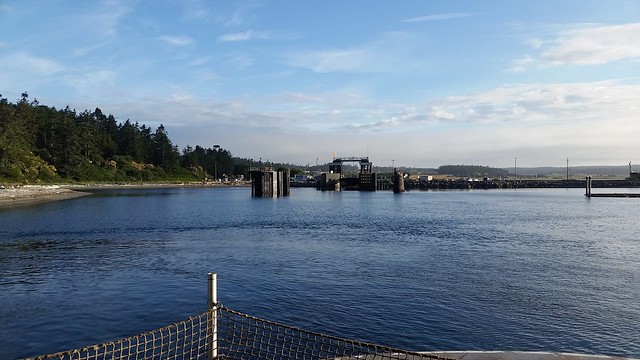 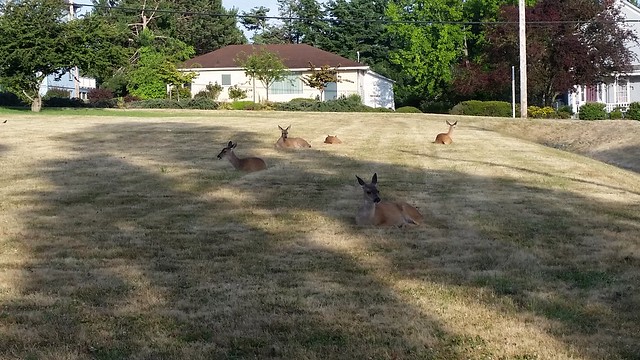 After the 30 minute ferry ride to Whidbey Island, we drove 26 miles north where we crossed a scenic bridge over Deception Pass on to Fidalgo Island.  From there it was another nine miles to the town of Anacortes, where we caught the ferry to Lopez Island. 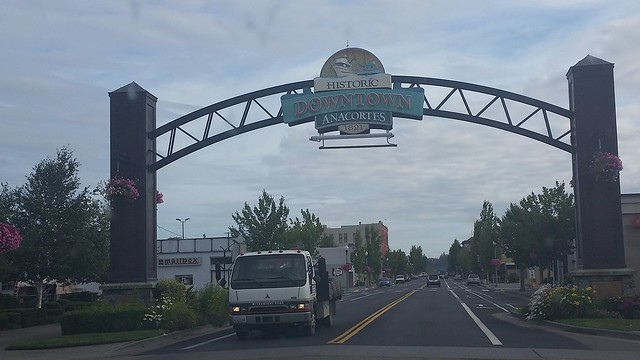 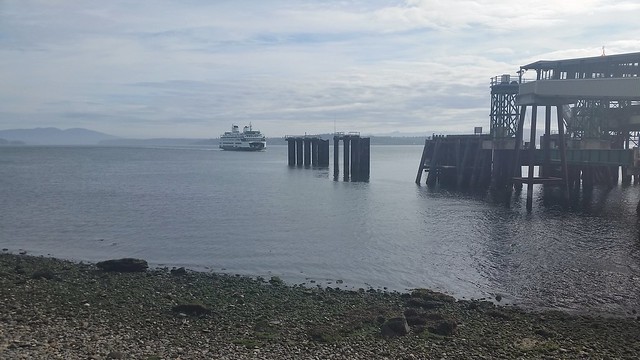 Laurel suggested we park the Jeep in Anacortes and walk on to the ferry since we didn’t need it on Lopez.  That was a great idea as you don’t need a reservation to walk on to any of the ferries. 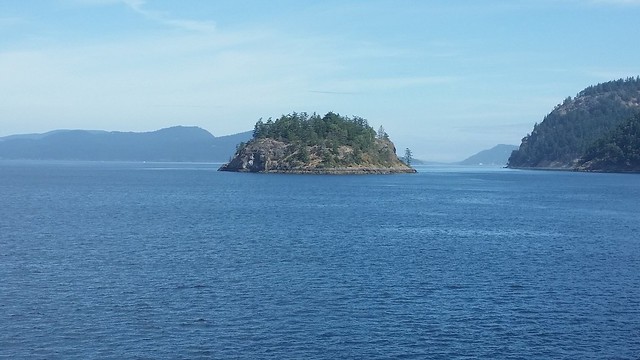 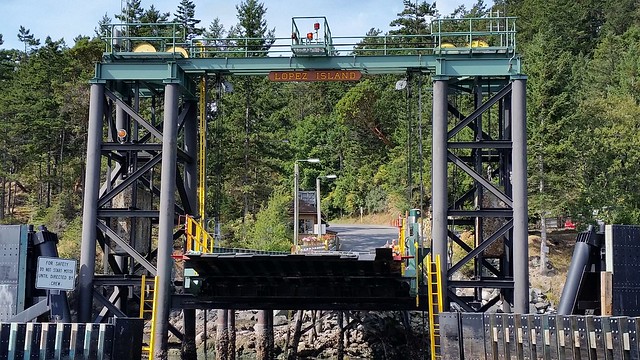 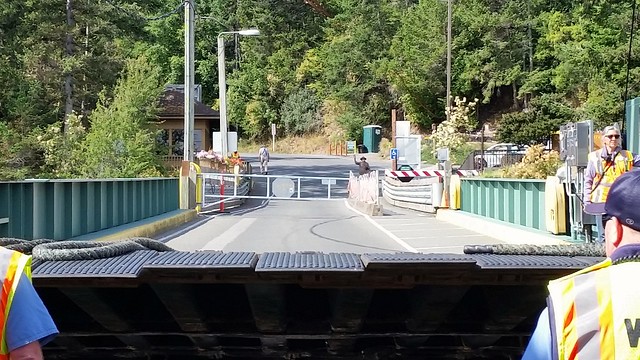 Our Uber driver waves as we prepare to disembark

Eric was right there to meet us as we left the ferry, while Laurel was back at the park preparing a picnic lunch.  He gave us a nice tour of  Spencer Spit State Park before taking us to their summer home tucked away in a very nice spot away from any park visitors.  The four of us then walked down to a nearby beach and out onto the Spencer Spit. 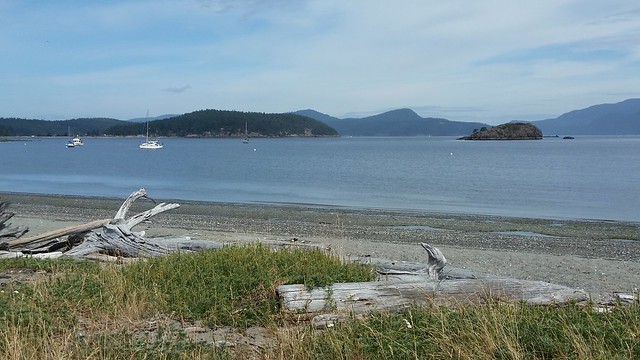 View of the San Juan’s from the Spencer Spit

The group then piled into their truck for a quick tour of the island.  Lopez Island is the third largest of the San Juan’s.  It is flatter than the other major islands and the most rural with a rolling terrain of forest, farmland, and beaches.  It’s about 10 miles long and 4 miles wide.  There is a nice little community on the west side of the island with two grocery stores, a great library, a few places to eat, and lots of farm stands.  Nearby Fisherman Bay has a marina and a small motel.

After our tour we drove to the southeast side of the island, parked, and hiked a short distance to a small beach along Watmough Bay.  Laurel put down a blanket and laid out a delicious lunch spread for us to share. 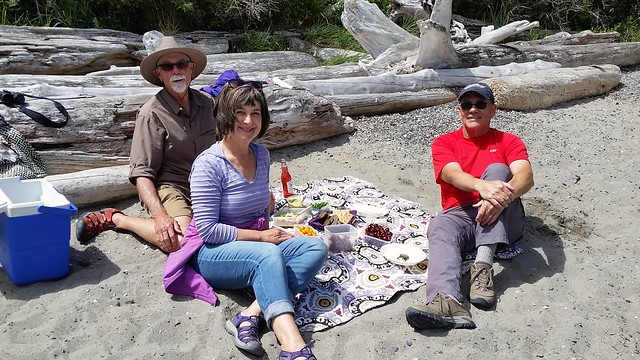 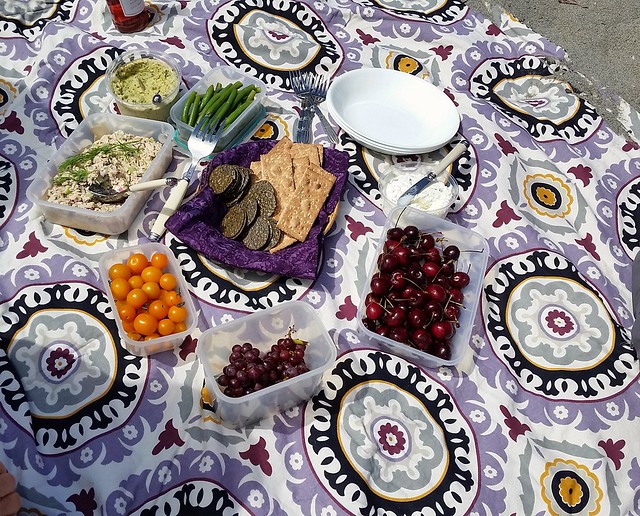 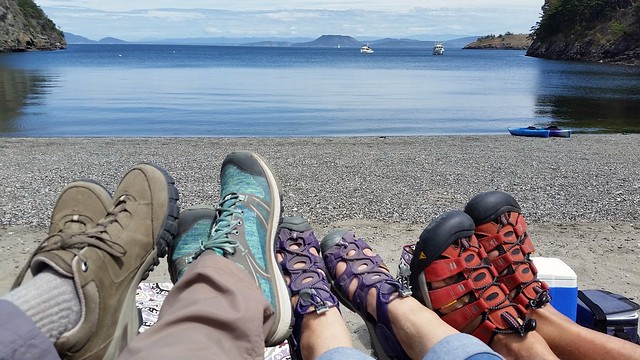 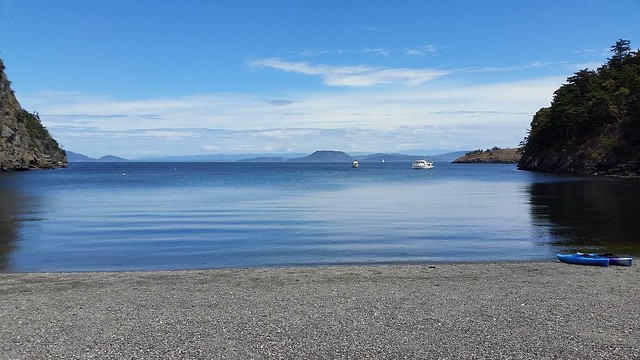 After enjoying a quiet lunch along the bay, we returned to the truck and drove across the island for a visit to Shark Reef Sanctuary.  A half mile trail through some old growth trees leads to a great view of the San Juan Channel. 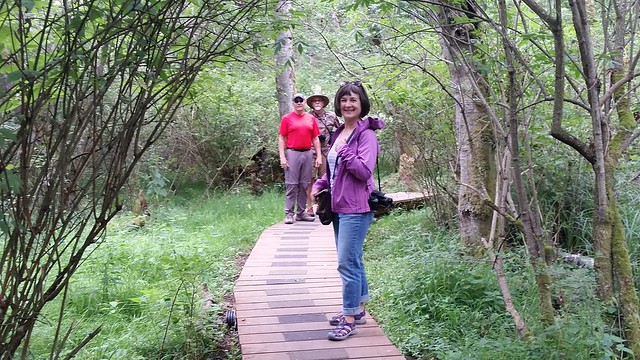 The channel below us was a swirling river of fast flowing water created by tidal movement between islands. 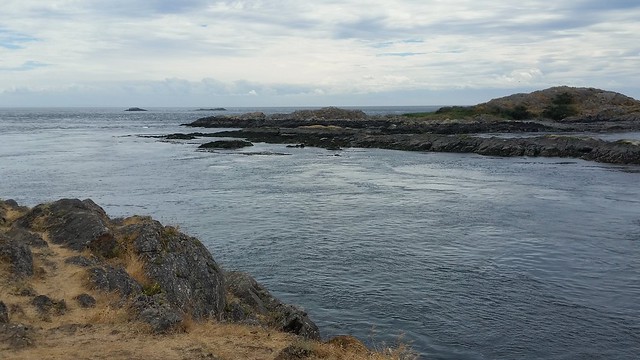 A mother sea lion was enjoying a nap while her pup enjoyed lunch on one of the small islands across the channel. 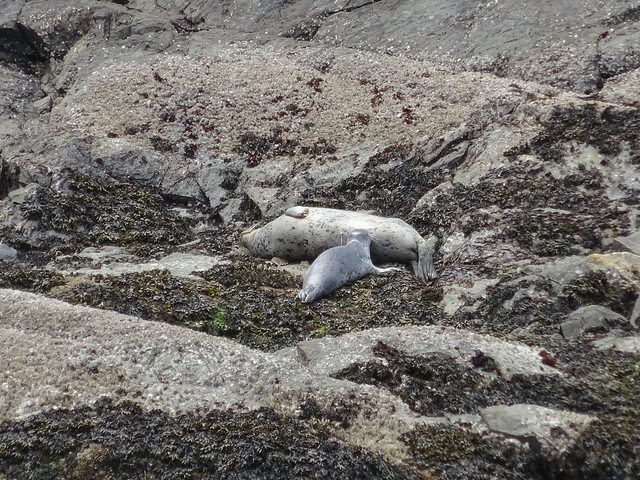 Our time on the island was limited as we had to coordinate the two ferries back to Port Townsend, so we had to hustle back to the ferry terminal to catch the boat to Anacortes. 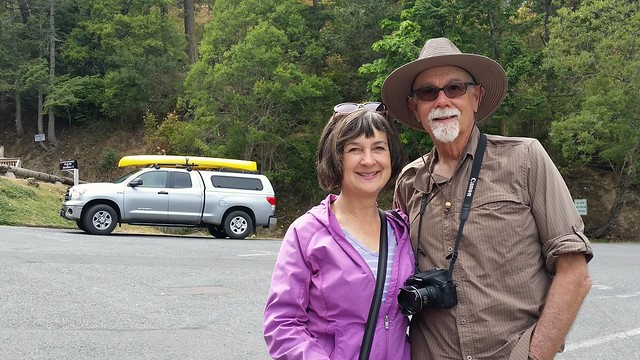 Our tour guides and their Uber vehicle

The return trip was uneventful and we were back at the motorhome before dark (not difficult as it stays light until almost 9:30).  Ten hours of travel for a four hour visit is a bit inefficient, but it was well worth the effort.  Our thanks to Laurel and Eric for a wonderful visit to your beautiful island.

The end of our month-long visit to the Port Angeles area is rapidly approaching.  Soon we will move to the west side of Olympic NP for a visit to the little town of Forks.  More on that later . . .

14 Responses to Island Hopping to Lopez