Hiking to the top of Maiden Peak

Soon after arriving in this area we were told by a local resident not to miss a visit to the Deer Park section of Olympic National Park.  A little research revealed that Deer Park is the location of the trailhead for a hike to Maiden Peak, a 6,434 foot peak with a great 360 degree view of the mountains to the south and water to the north.   So one day last week we took  US 101 to just east of Port Angeles where we turned south on to Deer Park Road.  The 16 mile road is paved for the first 8 miles but once it enters the national park, the road narrows and becomes dirt. 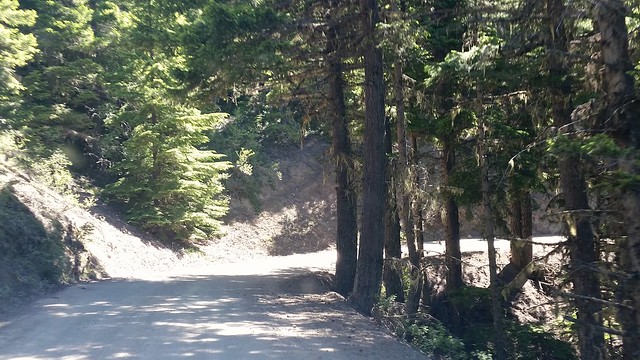 We read that the road can be quite rough at times, but it must have been graded recently as we found it to be in good condition, although very dusty.  It’s a bit narrow in spots with steep drop offs to the west, so you need to be alert, especially when going around the numerous turns. 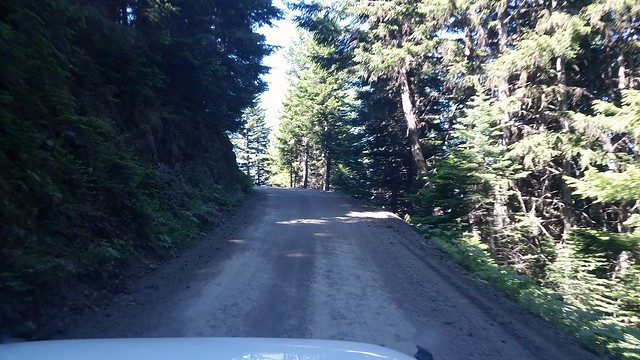 As you gain in elevation great views appear where there are gaps in the trees. 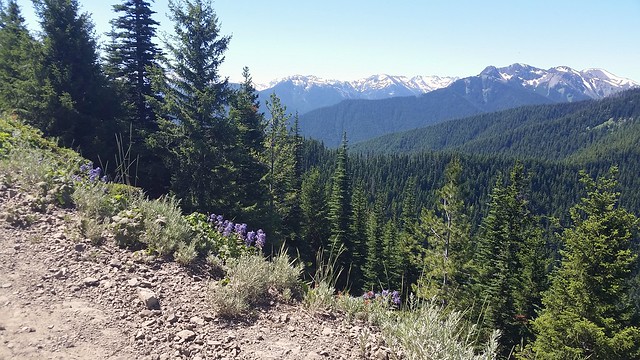 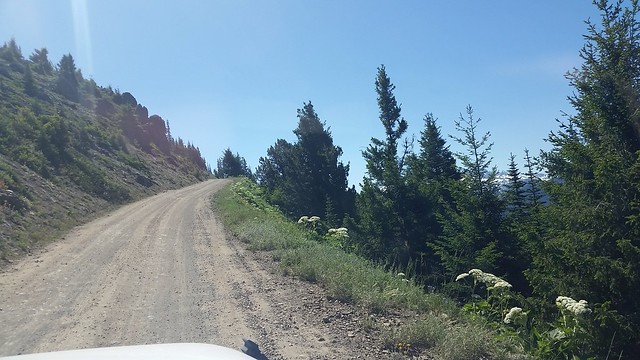 As we approached the end of the road, a clearly marked turn to the right led to a small parking area near a ranger station at 5500 ft.  We didn’t see anyone on the drive up so we were surprised at the number of cars in the small parking area.  We were just able to squeeze the Jeep into a spot parallel to the road before heading to the nearby trail. 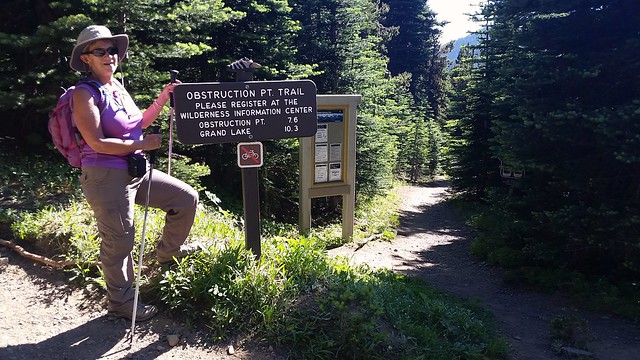 Maiden Peak is located along the Obstruction Point Trail

The trail begins by going sharply downhill (to 4900 ft) for almost a mile.  It’s a nice, easy walk on fresh legs, but we knew we would pay a price coming up on the return hike! 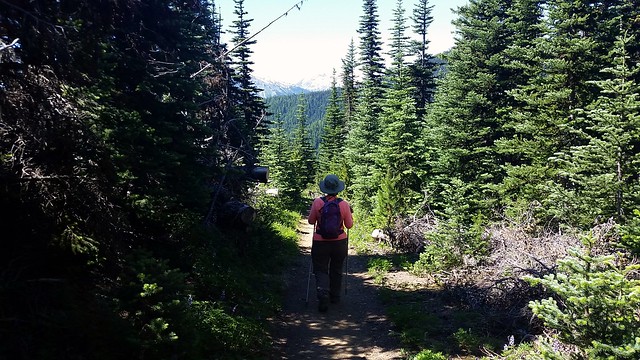 The trail first goes through the forests of Green Mountain, then opens into meadows with a view of a false summit of Maiden Peak. 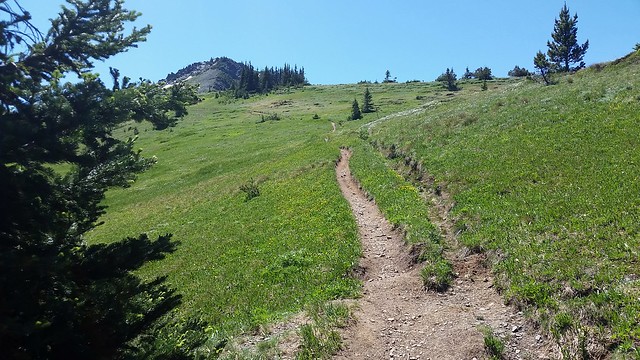 As we climbed up through the meadow, the top of Maiden Peak soon came into view. 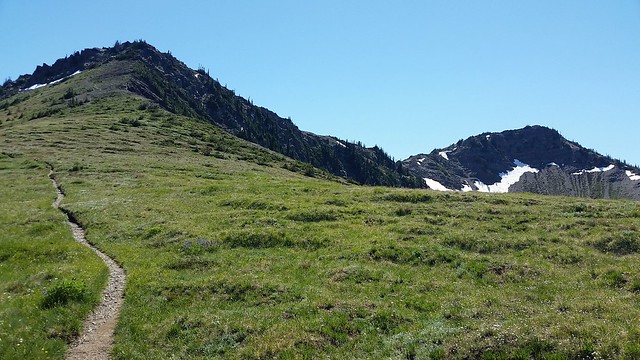 Maiden Peak on the right 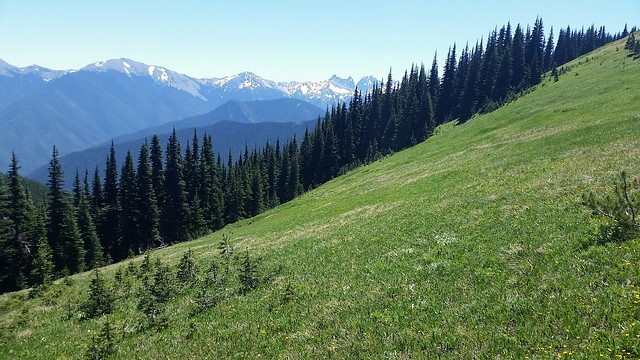 We waited, but Julie Andrews failed to appear 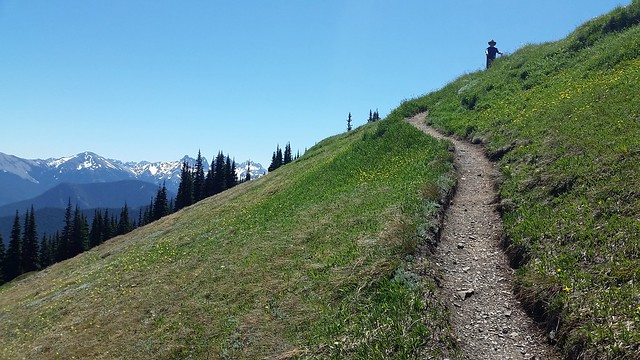 Continuing up through the meadow

After climbing up through the meadow, the trail winds around the first peak on a narrow path where it it best to keep your focus on the trail, despite the gorgeous views. 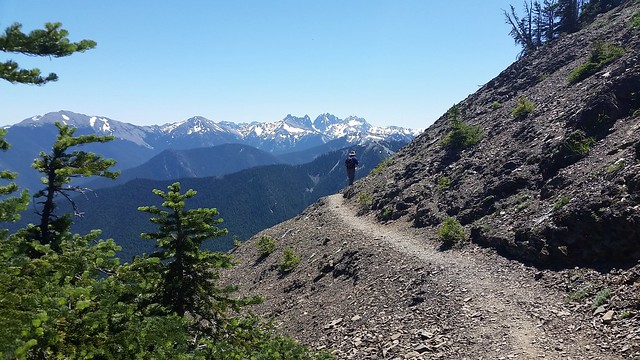 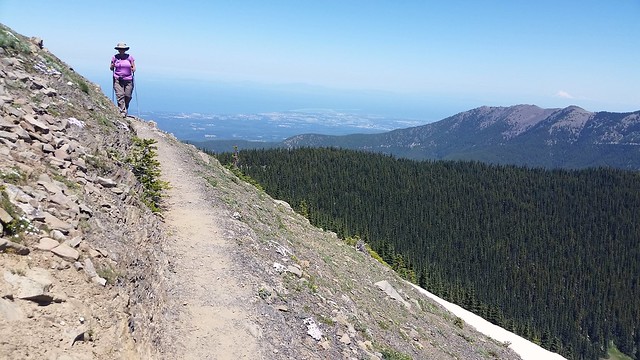 Once we made our way around the first peak, we could see Maiden Peak in front of us. 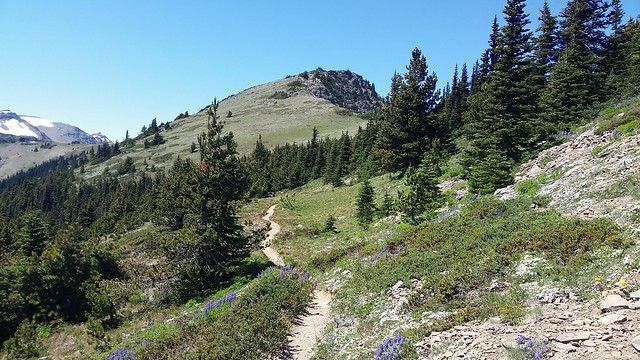 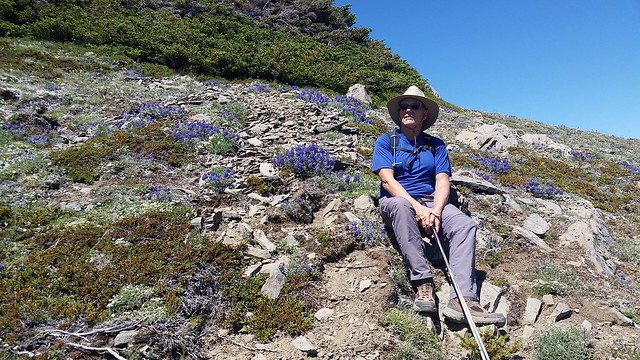 A young climber rests among the lupine before the final assault up to the peak!

The main trail continues around the peak and keeps going further into the mountains.  We knew there was no defined route to the top, but we read somewhere that there was a spot where you could see hints of a path others had used.  We hiked all the way to the other side of the peak and found a little used path, but it didn’t lead to the top so we just ended up scrambling up the loose rock to the peak. 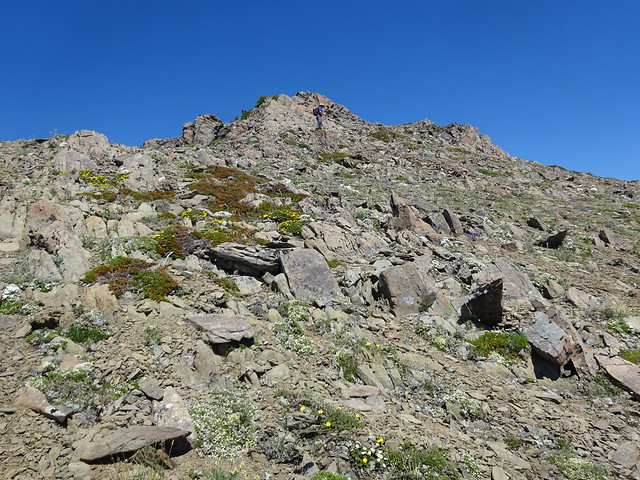 Can you spot John in the top center of the rocks? 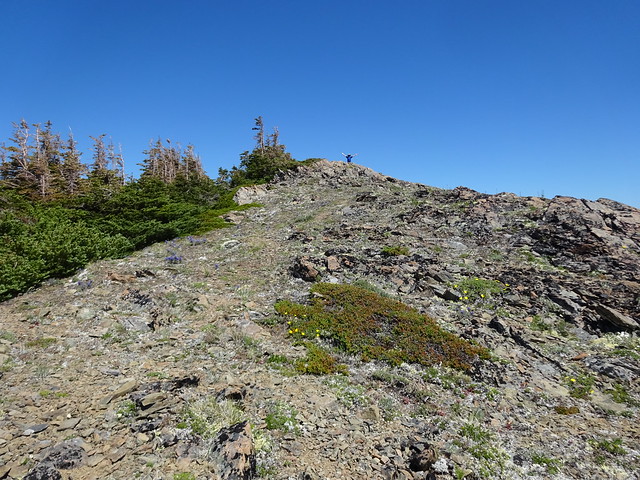 That’s him waving from atop the peak

A USGS survey marker identifies the highest point on the peak at 6,434 ft. 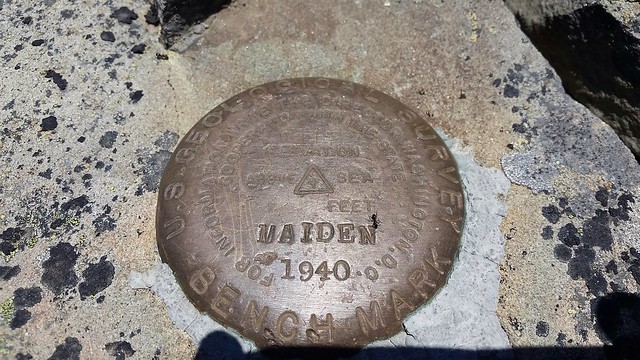 The photo below has a bit of haze, but you can just make out the Dungeness Spit jutting out into the Strait of Juan de Fuca.  With binoculars we could see the lighthouse we visited last week with Eric and Laurel (blog post). 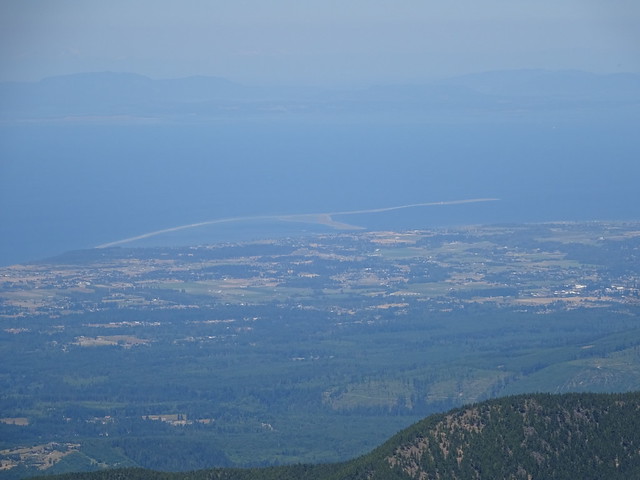 Dungeness Spit to the north 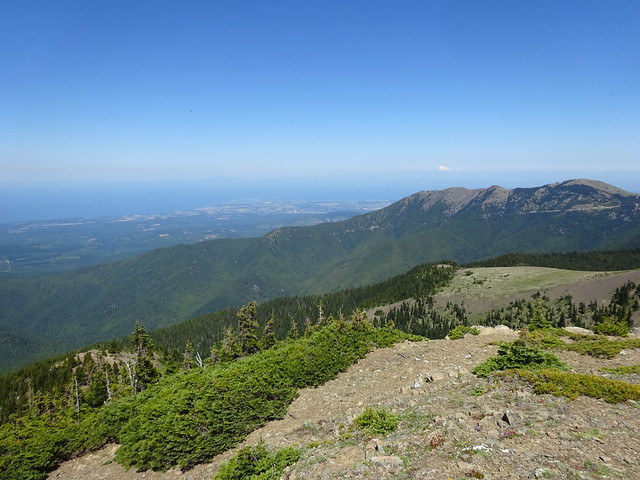 View to the northeast with Mt Baker in the distance 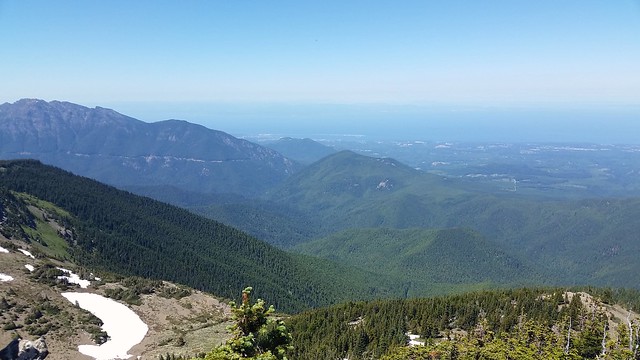 View to the northwest 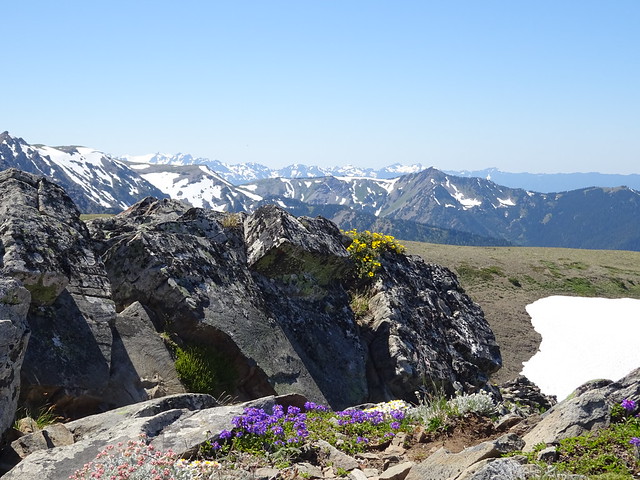 View to the southwest 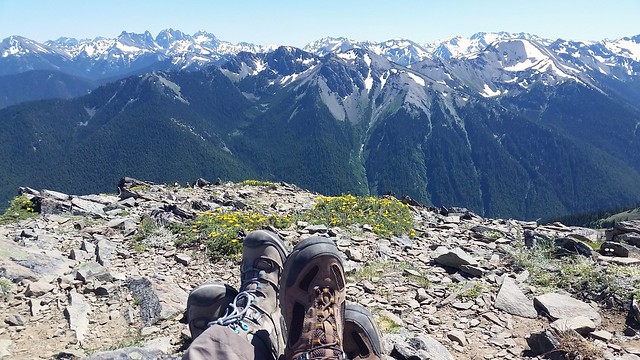 After enjoying the views on the peak we began the hike back to the trailhead.  We first had to get back to the main trail below us through the loose rocks. 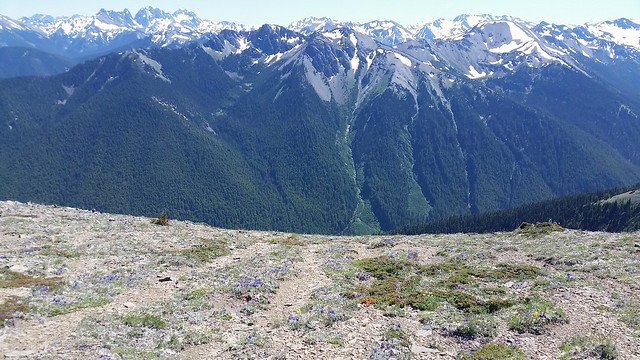 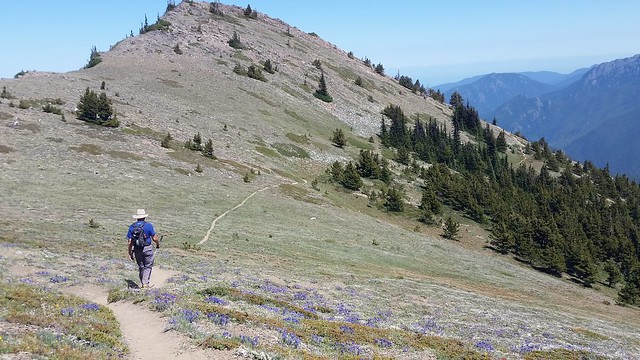 Back on the main trail 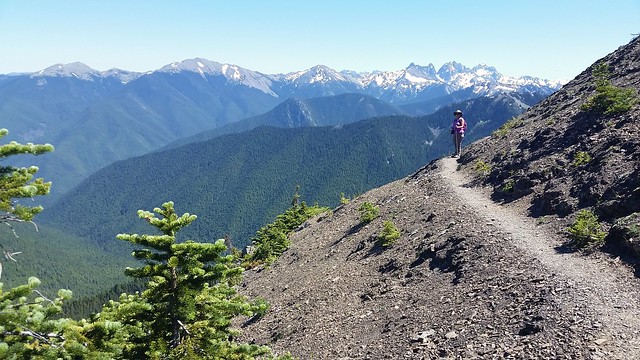 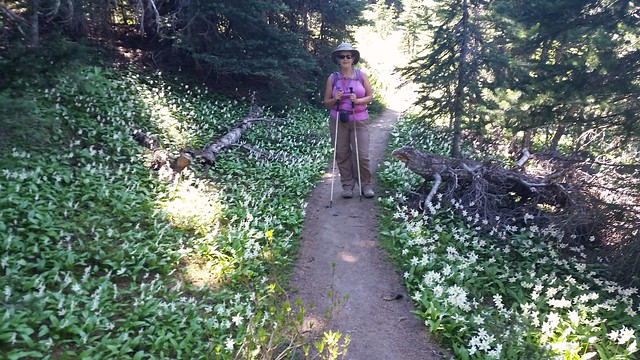 The hike is eight miles round trip, so our legs were a bit tired as we hit that last uphill mile to the trailhead.  Once back at the parking area we could see the two peaks in the distance. 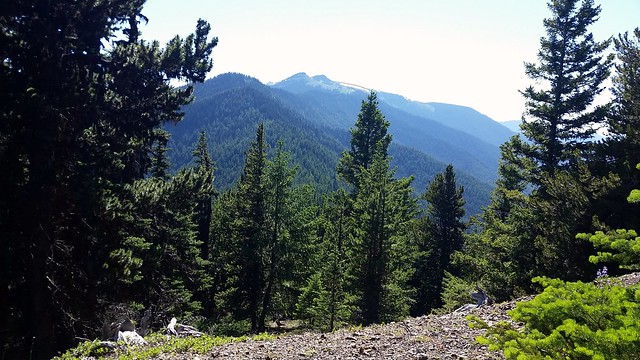 Then it was back down the dusty, winding, narrow road to civilization. 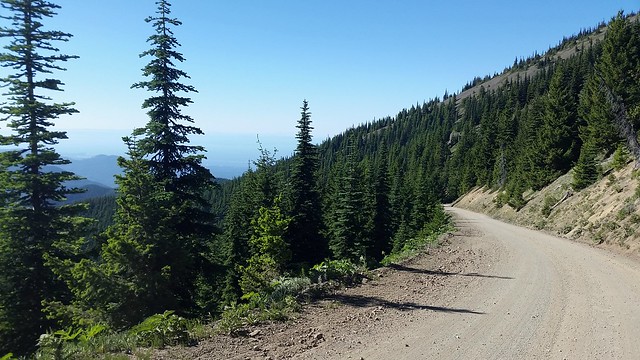 The hike to Maiden Peak is one of the best we have ever done.  The constant elevation change really works the legs, but the great views near and atop the peak make it well worth the effort.

Next up for us is a bit of “island hopping” to visit friends.  More on that later . . .

35 Responses to Hiking to the top of Maiden Peak