Hiking, Biking, and Playing Tourist on the Olympic Peninsula

Last week we drove 17 miles south into the Olympic Mountains with Eric and Laurel to do some hiking along Hurricane Ridge (click here for that post).  While there we learned that sometimes low clouds cover the valleys while Hurricane Ridge sticks out above them in the clear.  So one day last week we checked a web cam view from the visitor’s center and saw just that condition.  But by the time we got up there the clouds had disappeared.  We still enjoyed the beautiful views from the ridge and went into the visitor center to view their video.  As we drove out of the parking area we decided to take a little side trip.  Just as you drive out of the parking area there is a dirt road on the right that leads steeply downhill.   Obstruction Point Road winds its way through the forest for about eight miles, ending at Obstruction Point Trailhead. 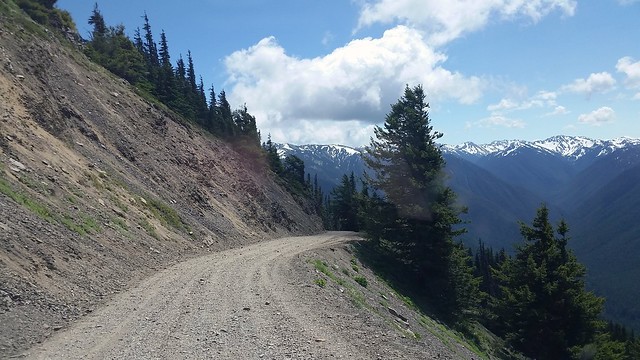 The road is only officially open July through October.  When we were there, they had just opened the first four miles of it as there was winter damage beyond that.  We drove to the point where the road was closed and turned around in a small trailhead parking area.  A sign there indicated a hike of less than a mile leading to P.J. Lake. 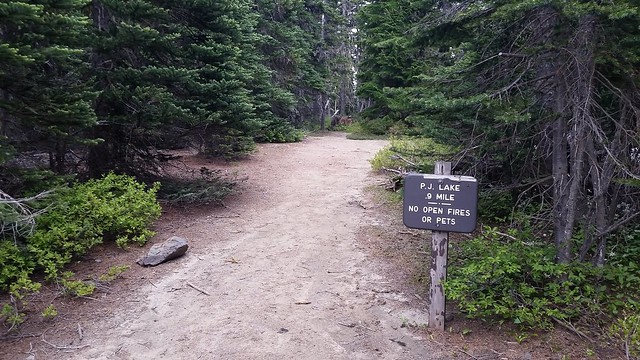 We had not heard of this trail but enjoy seeing beautiful mountain lakes, so we got out our packs and headed down the trail.  “Down the trail” turned out to be a good description, as the trail quickly began a very steep descent into a canyon. 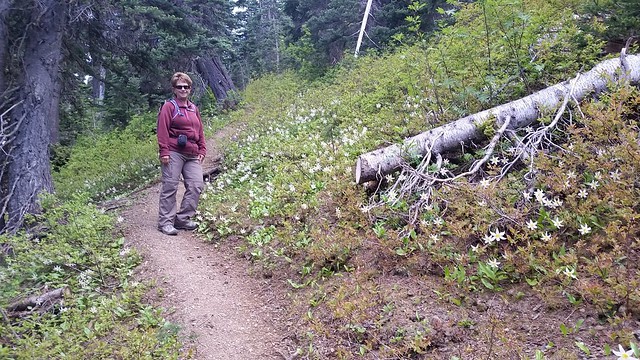 We hiked down to the bottom, but a heavily flowing stream prevented us from reaching the lake.  So back we went up the steep track.  Photos never show the true steepness of trails. 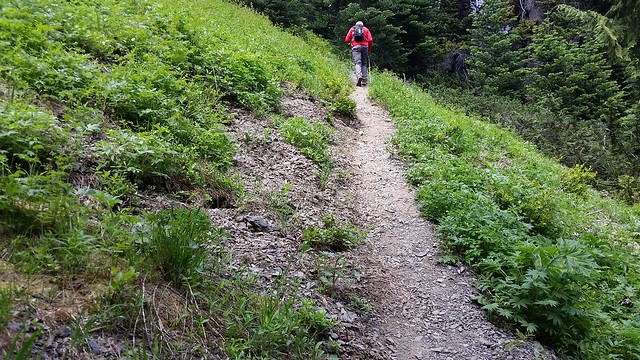 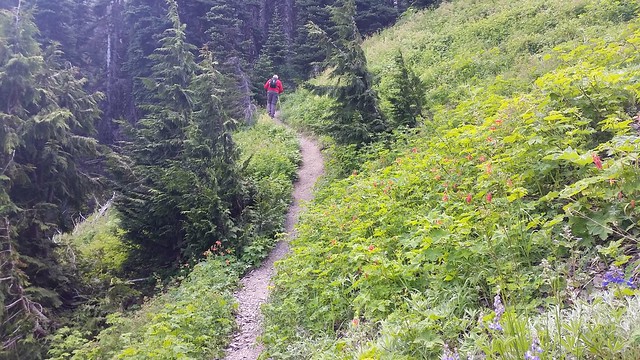 After climbing back up to the Jeep we drove back to the main road and headed down the mountain.  Along the way we spotted a doe with two fawns feeding along the side of the road. 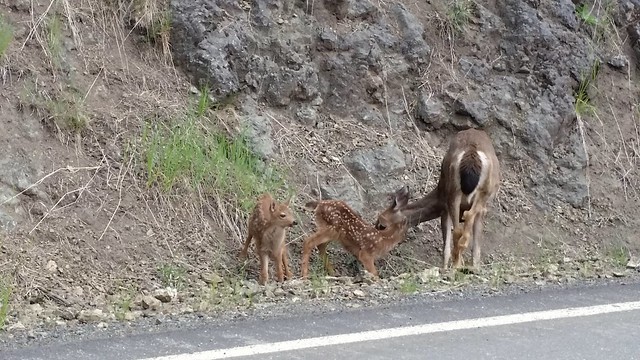 The next day we headed west on US 101 to the south side of Crescent Lake for a hike up to Marymere Falls. 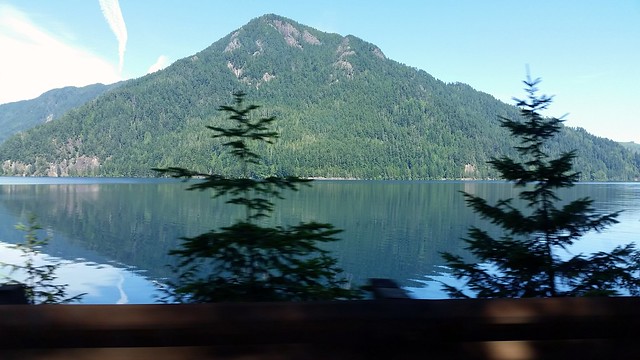 View of Crescent Lake from US 101

The trailhead is at the Storm King Ranger Station parking area on the south shore of the lake.  The trail goes through a tunnel under the highway and heads south along Barnes Creek. 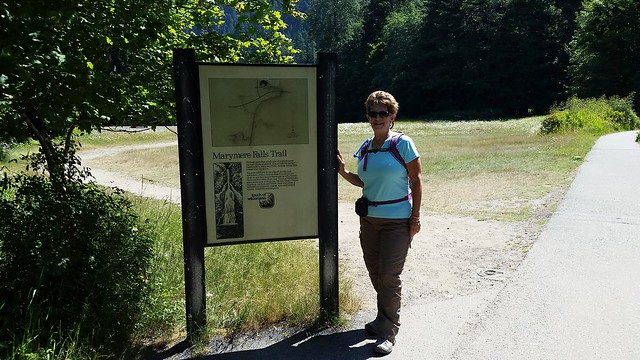 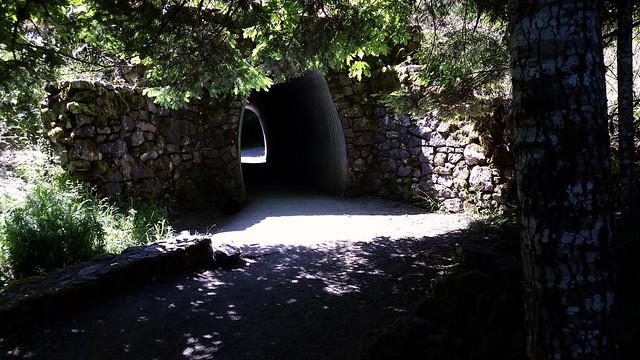 The flat trail goes through old growth forest for about a half mile before crossing Barnes Creek. 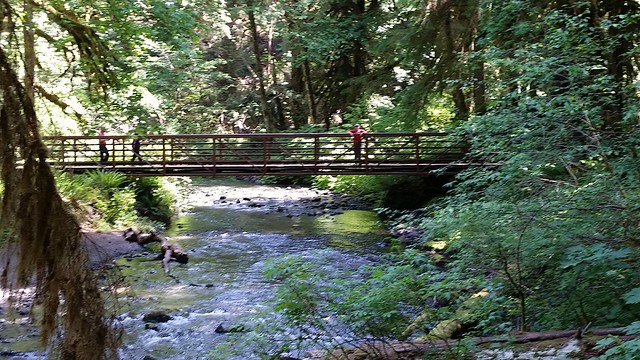 Soon after crossing that bridge the trail goes over Falls Creek on a more narrow bridge. 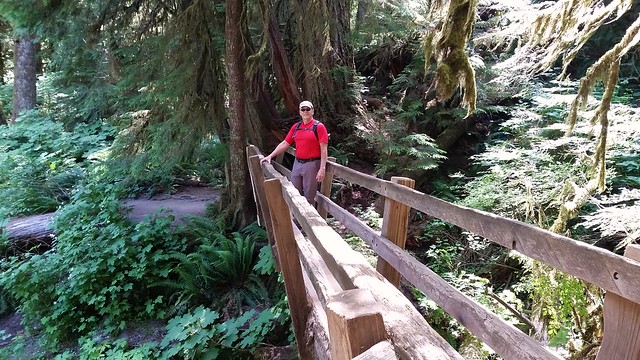 Just past that bridge the trail goes steeply up to the falls.  With the heavy snow melt the flow of water over the falls was impressive. 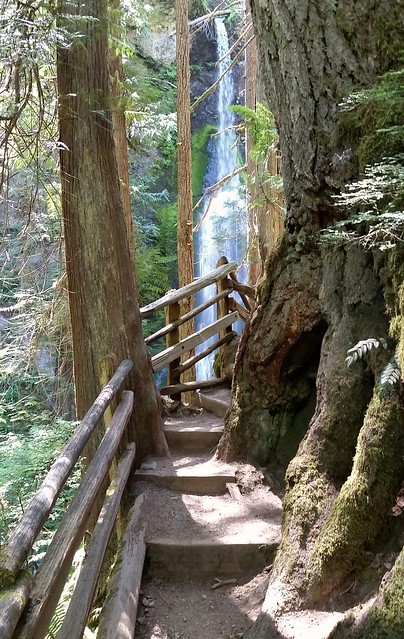 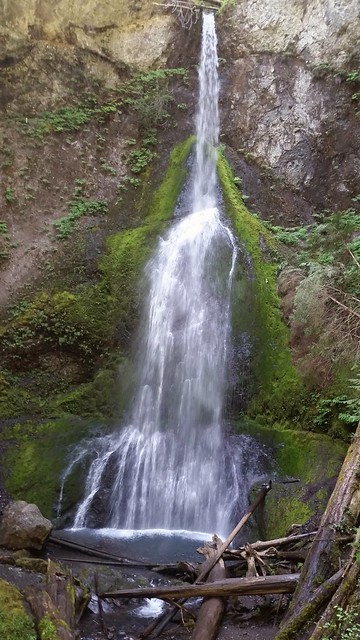 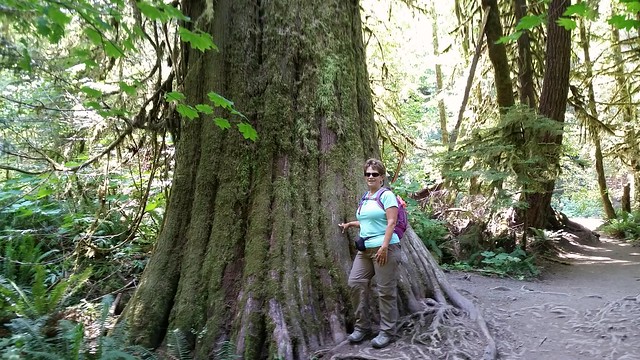 Some trees along the trail were huge

Returning to the trailhead we drove around to the north side of the lake to explore a trail there.  The trail turned out to be a paved bike path with limited lake views.  So we walked down a dirt path to the lake and enjoyed lunch.  The location made a “lunch with a view” photo difficult forcing some minor modifications in the pose. 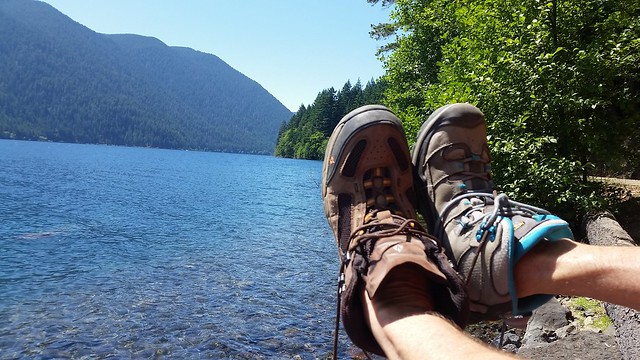 Lunch with a view (modified) 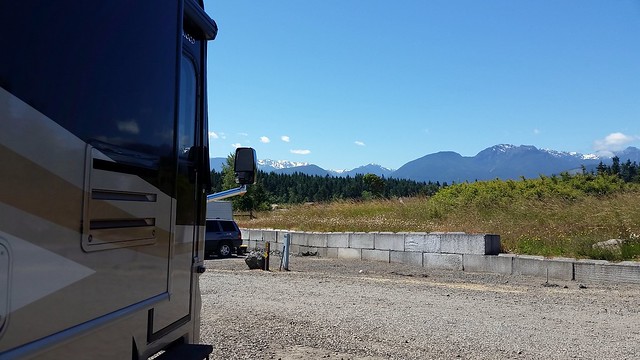 The Olympic Discovery Trail is a bike/hike path that, when completed, will run 130 miles along the north shore of the Olympic Peninsula from Port Townsend on the east to La Push on the west.  Over 70 miles of paved trail have been completed so far.  We are able to easily access the trail from the KOA by crossing US 101 on to the Old Olympic Highway for about two miles.  We rode 11 miles from the park to one of those chain coffee shops out of Seattle in Sequim.  The trail is fairly flat but the wind blows pretty strongly out of the west around here so the return ride was a bit of a challenge. 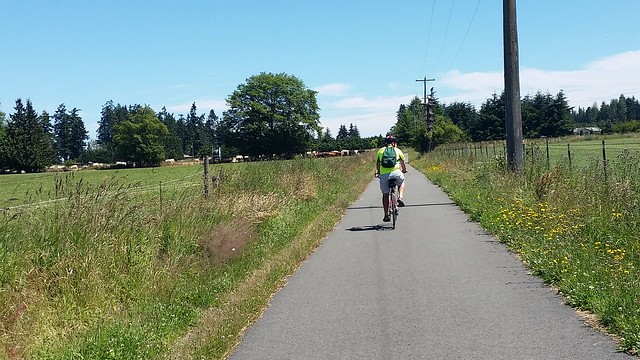 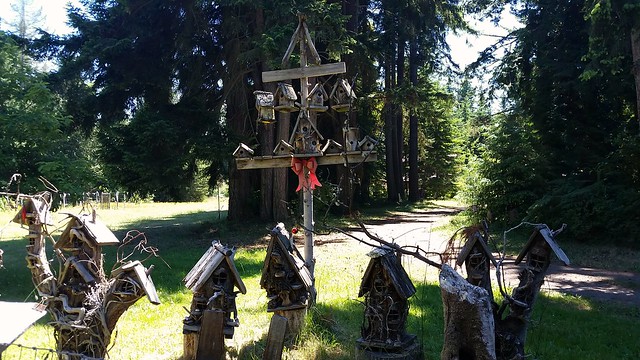 Bird houses for sale along the trail

Just outside Sequim the trail goes through Railroad Bridge Park, where it uses an old railroad bridge to cross the Dungeness River. 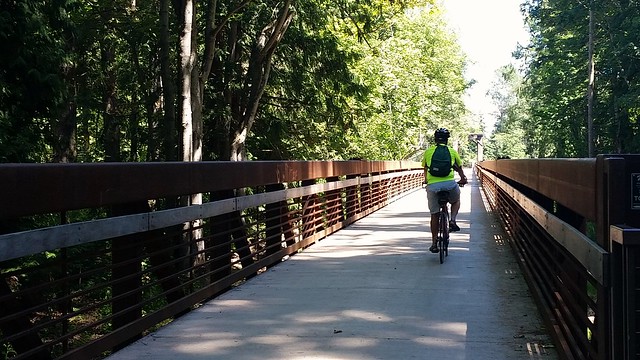 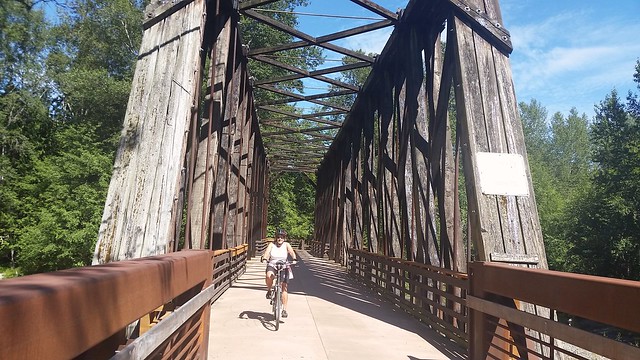 Another day we drove about 40 miles to the east for a visit to the small town of Port Townsend.   It sits almost at the end of a peninsula at the point where the Strait of Juan de Fuca becomes the Puget Sound.  Our first stop was Fort Worden Historical State Park, located just north of Port Townsend on the tip of the peninsula.  Fort Worden was an active US Army base from 1902 to 1953, part of the defensive system guarding shipping in the Puget Sound. 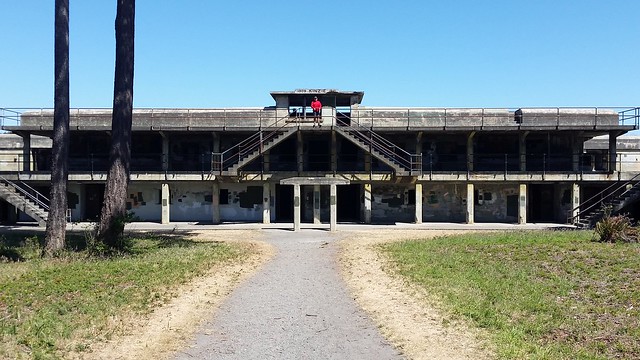 Remains of an old artillery battery 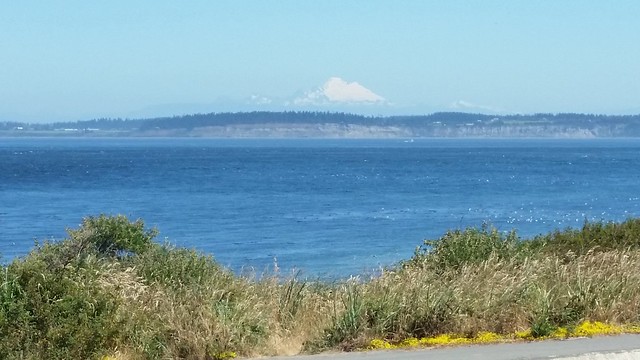 Great view of Mt. Baker, 60 miles away, from near the gun battery

At the very tip of the peninsula near the gun battery is the Point Wilson Light.  Originally constructed in 1879 and later improved in 1914, the light is controlled by the Coast Guard, while the grounds are managed by Washington State Parks. 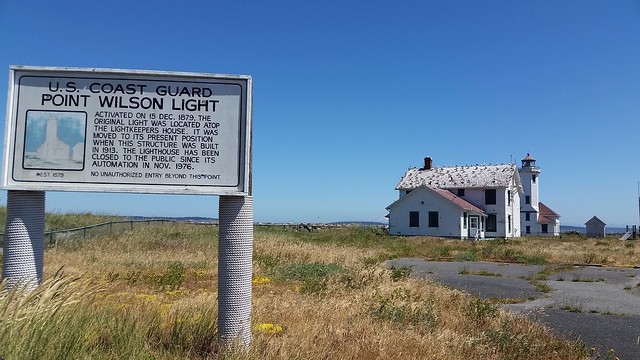 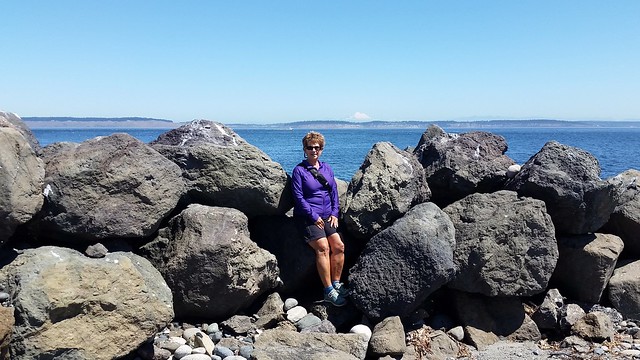 Another view of Mt. Baker 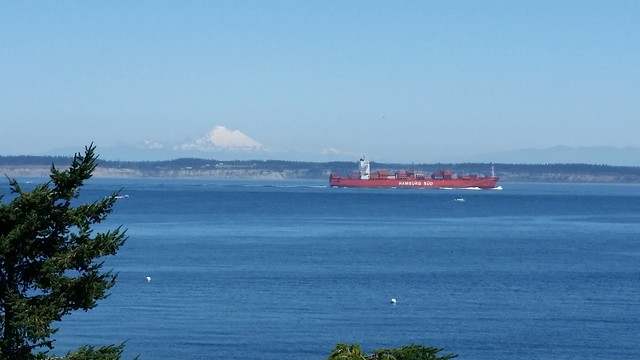 A bit of ship traffic

Leaving Ft. Worden we drove back into Port Townsend to explore the waterfront section of town.  As we walked out to the end of the restored old Union Dock we spotted the outdoor balcony of a local restaurant.  Since we always enjoy a lunch with a view, we headed up for a meal while overlooking the water. 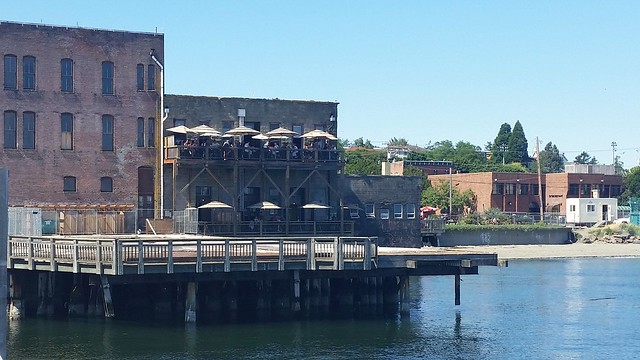 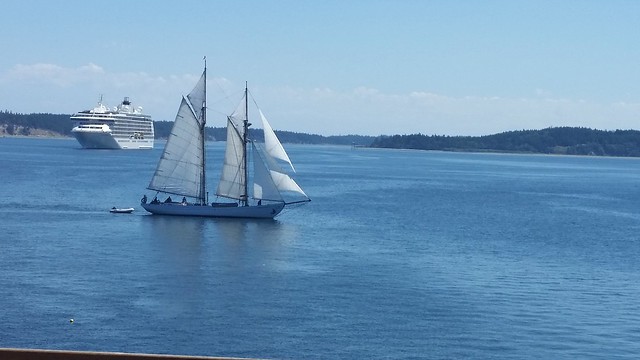 View from the deck of Sirens 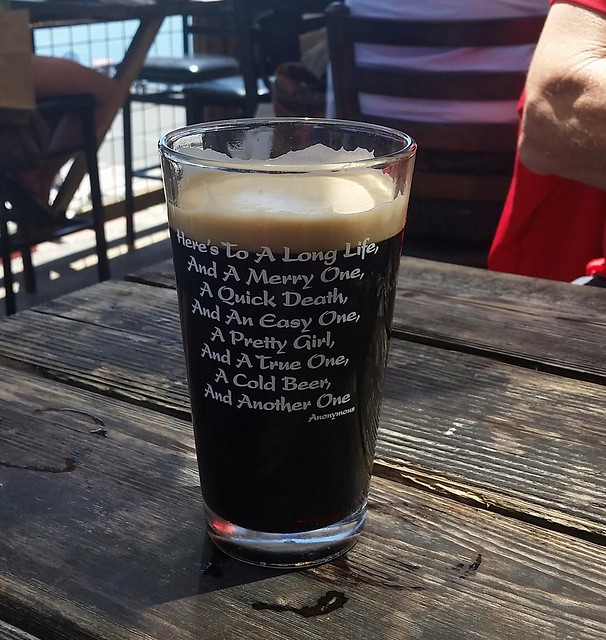 We also enjoyed some light refreshments

As we walked down Water Street we could hear someone singing and the sound of a piano.  Turns out it was a gentleman sitting at a grand piano at the corner of Taylor Street.  He was very good so we stood and listened for a bit (after putting a little cash in his jar).  We both agreed that we would definitely “turn a chair” for him (you’ll understand if you watch  “The Voice”). 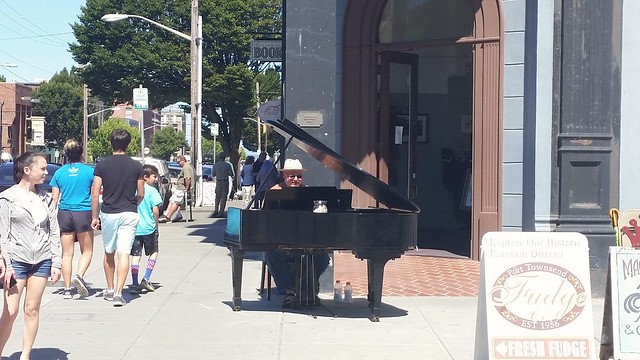 Port Townsend is a cool little town.  If you are into various forms of art, you would enjoy visiting some of the shops along Water Street.  But there were a bit too many (other) tourists for our tastes.

38 Responses to Hiking, Biking, and Playing Tourist on the Olympic Peninsula