Our first hike in Olympic National Park was a 6.3 mile lollipop loop trail beginning at the Whiskey Bend Trailhead.  To get to the trailhead we drove west on US 101 a few miles from our site at Elwha RV Park and turned south on to the Olympic Hot Springs Road just before the highway crossed the Elwha River.  After four miles on this paved road we again turned left on to Whiskey Bend Road, a narrow, dirt road that goes sharply uphill for another five miles ending in a loop that is the trailhead. 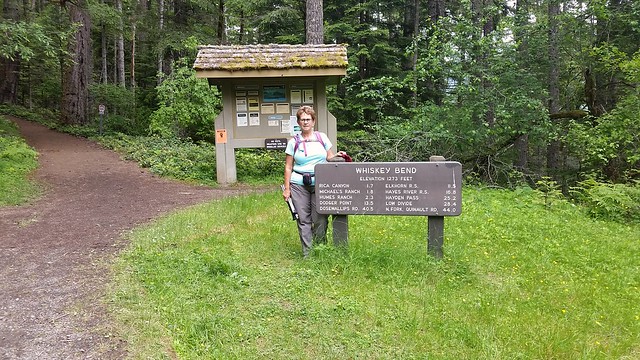 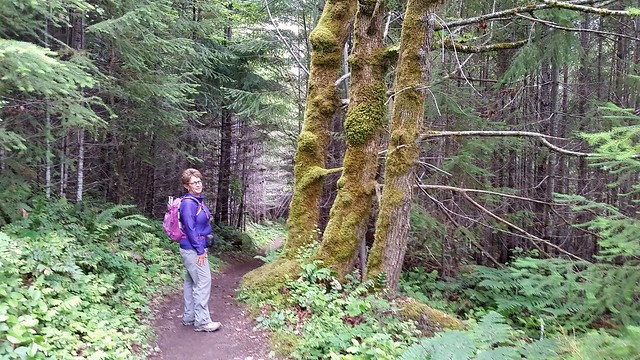 The main trail for this hike is the Elwha River Trail.   We hiked the Elwha River Trail across the hillside through dense forest for about .9 of a mile until we came to a junction with the Rica Canyon Trail, clearly marked with a small sign. Turning off on the Rica Canyon Trail we began a very steep descent on this narrow, sometimes overgrown, path to the river.  After a half mile the Rica Canyon Trail ends at the start of the misnamed Geyser Valley Trail but, before taking it, we hiked out the short Goblin’s Gate Trail to see this narrow rock gorge that constricts the churning Elwah River.  At Goblin’s Gate there was a nice rocky overlook where we sat eating lunch with a great view of the water rushing through the narrow channel. 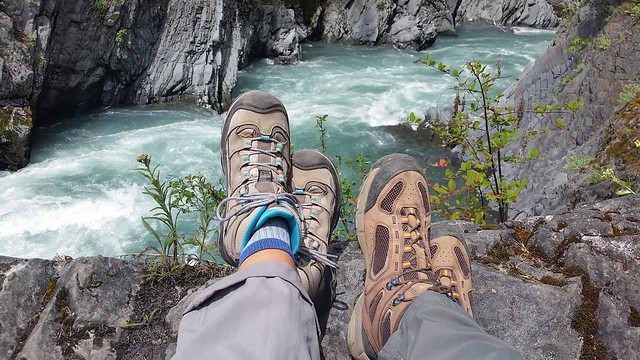 We returned to the Geyser Valley Trail and continued upstream along the river to Humes Ranch, set atop a grassy field. 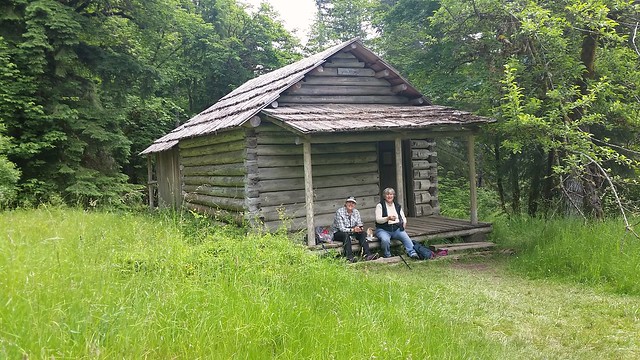 Two hikers we met sitting outside the Humes Cabin

Grant and Will Humes built a cabin and barn on the site in 1900.  They made their living hunting cougar and guiding camping parties into the Olympic Mountains.  Grant returned to their native New England in 1914, but Will continued to live in the cabin until his death in 1934.  The barn is gone but the cabin has been restored by the park service.

The cabin is at the end of the loop so we began the hike back on the Humes Ranch/Long Ridge Trail going uphill across a forested hillside that had many streams flowing sharply down the steep embankment. 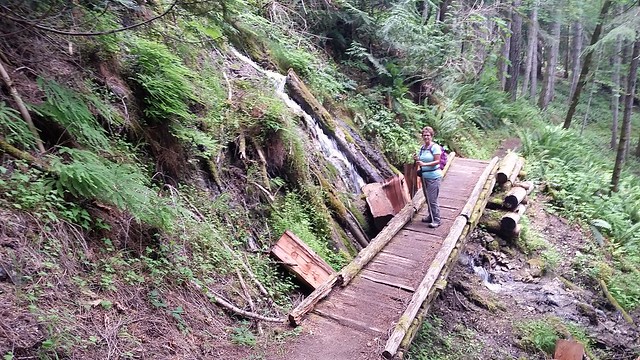 Before long we came to the recently restored Michael’s Cabin. The story goes that Michael’s Cabin was named for “Cougar Mike,” who kept the local mountain lion population under control.  We were a bit disappointed to find that Cougar Mike never lived in the cabin. In fact, the cabin was built in 1937 on land formerly owned by Mike.  The two men who built the cabin used it as they traveled the area maintaining trails and keeping the phone lines intact. 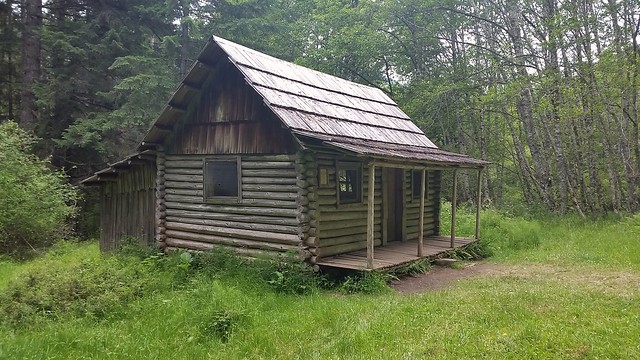 We continued on the Humes Ranch/Long Ridge Trail until it re-joined the Elwha River Trail leading back to the Whiskey Bend Trailhead.

As we drove up the Whiskey Bend Road, we stopped briefly at an overlook for the former site of the Glines Canyon Dam.  We say “former site” as the dam was removed between 2011 and 2014.  From our vantage point we could see across the river to the remains of the dam’s spillway on the other side.  There was no information where we were standing (on the east side), but we could see information displays on the other (west) side of the river.  So after our hike we drove around to the other side to visit that part of the remains of the dam. 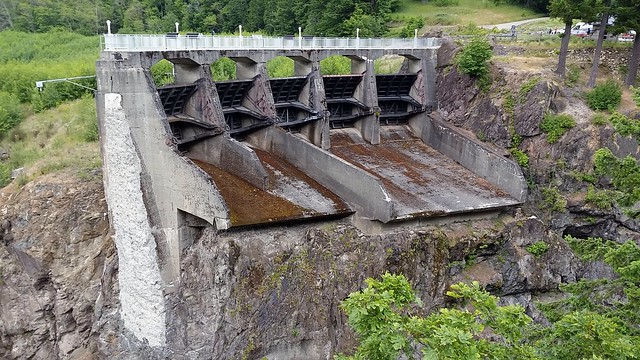 View from the east side (Whiskey Bend Road) 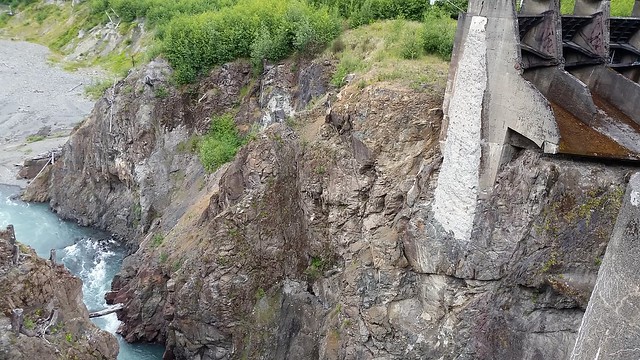 Looking down from the east side 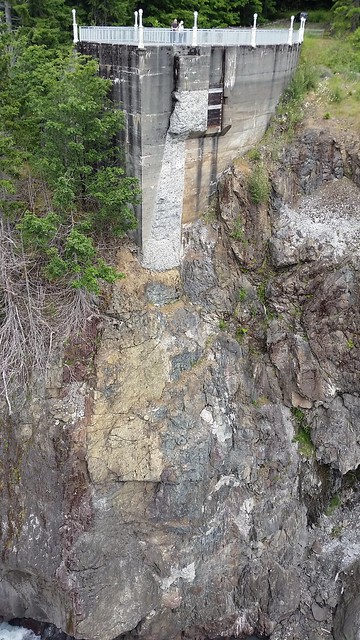 View back across from the west side

Below is a photo of the dam before removal.  The “You Are Here” point is the viewing area on the west side of the river.  The dam is just to the left of that in the photo. 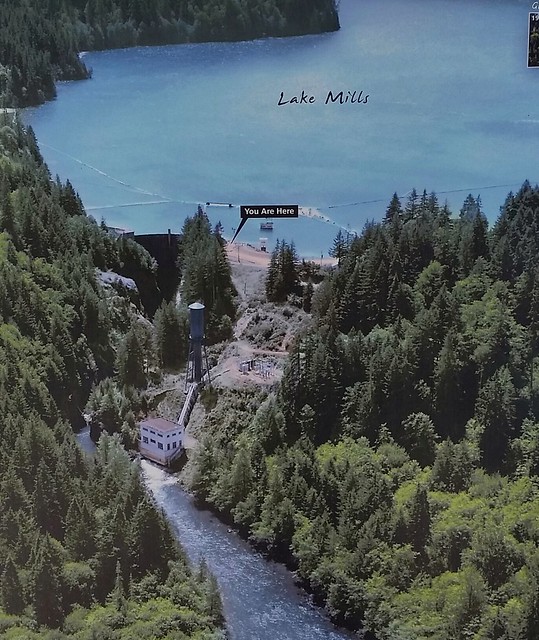 OK, you want a little history of the whole dam thing, so you’re going to get it!

Glines Canyon Dam, built in 1927, was a 210-foot  high concrete arch dam built on the Elwha River.  The dam, as well as the Elwha Dam eight miles up river, was built privately to generate electricity for industries and major military installations on the Olympic Peninsula, including lumber and paper mills in Port Angeles.

But while providing electricity to the nearby communities, the Glines Canyon Dam blocked access by migrating salmon to the upper 38 miles of mainstream habitat and more than 30 miles of tributary habitat.  The Elwha River watershed once supported salmon runs of more than 400,000 adult spawning returns on more than 70 miles of river habitat.  By the early 21st century, fewer than 4,000 adult salmon returned each year.

Numerous groups lobbied Congress to remove the two dams on the river and restore the habitat of the river and its valley. The Elwha River Ecosystem and Fisheries Restoration Act of 1992 authorized the Federal Government to acquire both dams for decommissioning and demolition for habitat restoration.

The Elwha Ecosystem Restoration project began removal of the dam, along with nearby Elwha Dam, in September 2011 and concluded in August 2014.  Now that the dam has been removed, the area that was under Lake Mills is being re-vegetated and its banks secured to prevent erosion and to speed up ecological restoration. 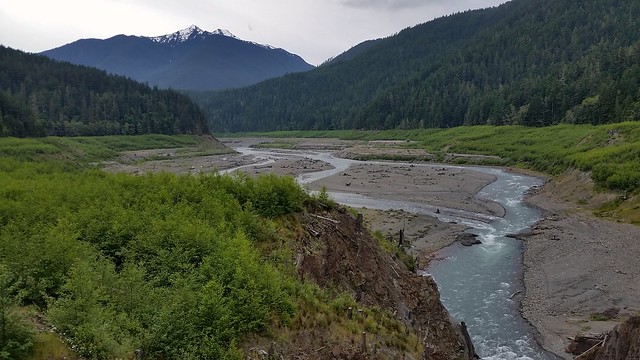 Numerous display panels on the west side observation point explain the removal process.  The photos below show the progression of the project. 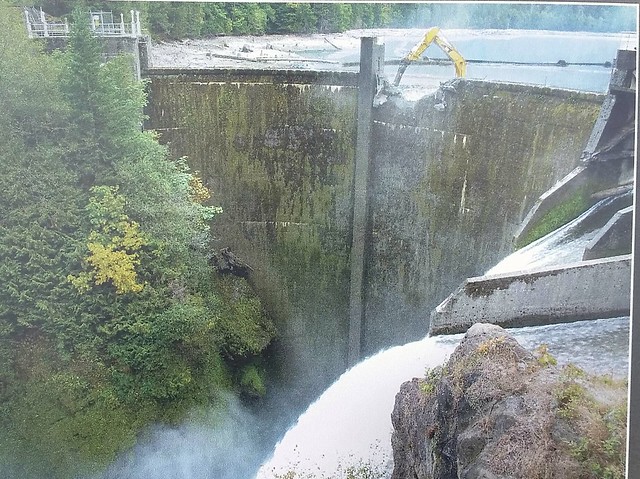 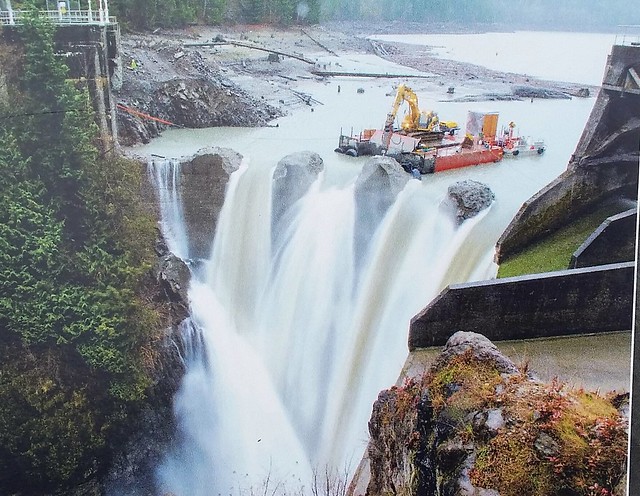 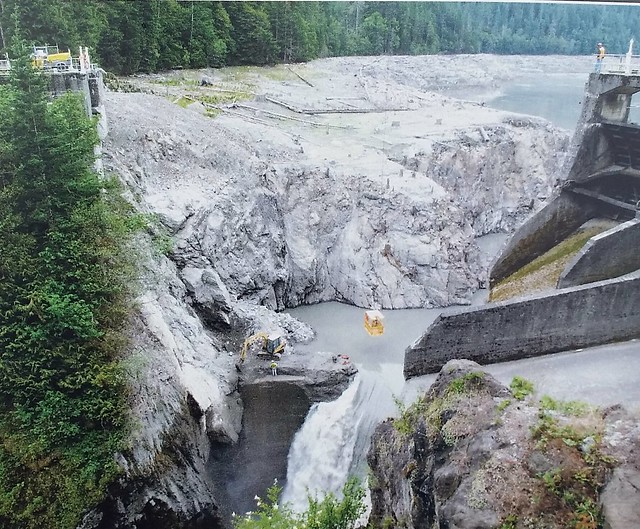 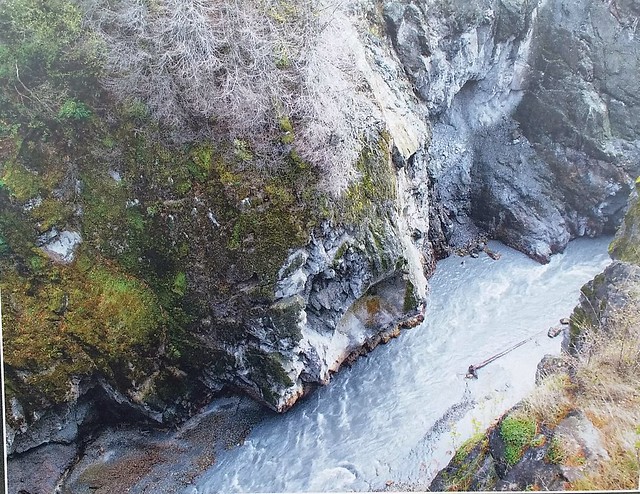 We’ll be in the Port Angeles area for the next couple of weeks and have a number of exciting hikes planned.  More on that later . . .

19 Responses to Whiskey Loop Hike and a Dam Removal