Along the Columbia River – Mosier, OR

After staying in Bend two extra days to let some rain pass through, we headed north on US-97 Monday morning.  The trip of about 145 miles began pleasantly, but soon became a bit of a struggle.  The first problem was of our own making.  We stopped for fuel in the town of Madras then drove right under a large sign over the road telling us to turn right at the next light.  But since we failed to see the sign, we drove straight through the intersection.  We didn’t see any route number signs along the way so we drove about 20 miles before we noticed we were on Rte 26, not Rte 97!  What a dumb move! We found a spot to turn around and headed back to Madras.  Oh well, we were not in a hurry anyway.  We returned to Madras, got onto Rte 97, and continued our journey to the north.  As we crossed the open high desert the wind began to increase from the west.  A strong crosswind in a high profile vehicle is never a good thing.   We came to a “Y” in the road and took the left on to Rte 197, the most direct route to The Dalles, where we would get on to I-84.  The scenery along Rte 197 is beautiful, but John didn’t get to enjoy it much.  He was hanging on with both hands as the road wound its way up and down some steep hills with the wind continuing to push us around. 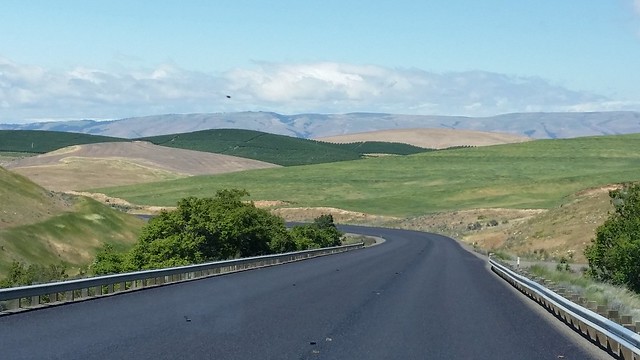 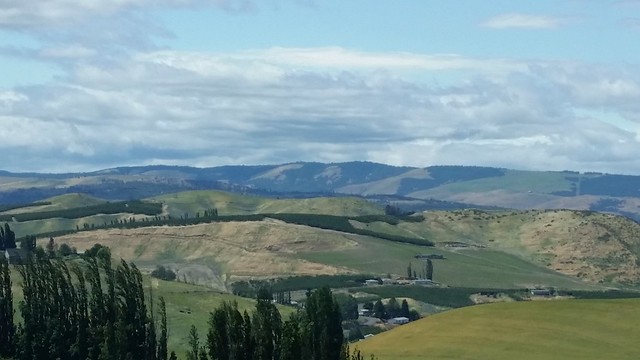 After finally reaching The Dalles we hopped on I-84 heading west through the Colombia River Gorge.  Fortunately we didn’t have that far to drive, as we were now heading directly into the wind, which increased in intensity through the gorge. 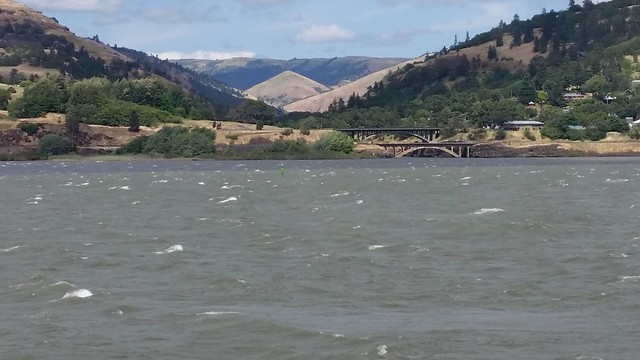 Whitecaps on the Columbia River!

After what seemed an eternity we reached our destination, Memaloose State Park, where we had a reservation for two nights.  Memaloose is an interesting little park, tucked between the interstate and the river.  It is only accessible through a rest area on the west-bound side of the highway.  If you are coming east, you have to pass the park, drive about 3.5 miles to the next exit, and get on the westbound side.

The next day we intended to do some hiking up on the hills above the river but the strong winds that continued from the previous day forced us to change our plans.  We did drive up the side of the gorge on a section of the old Historic Columbia River Highway.  At the top of the first high hill we stopped at the Memaloose Overlook.  A plaque there explained the origin of the name “Memaloose.” 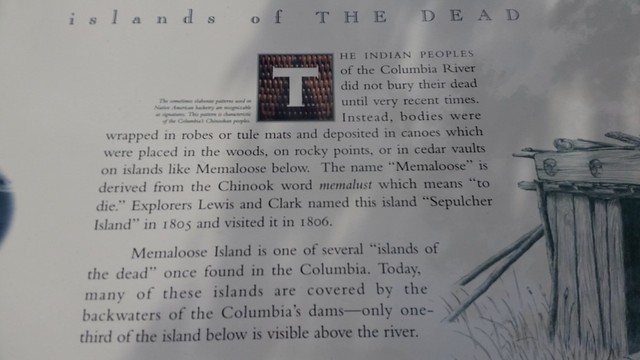 Memaloose Island was visible from the overlook. 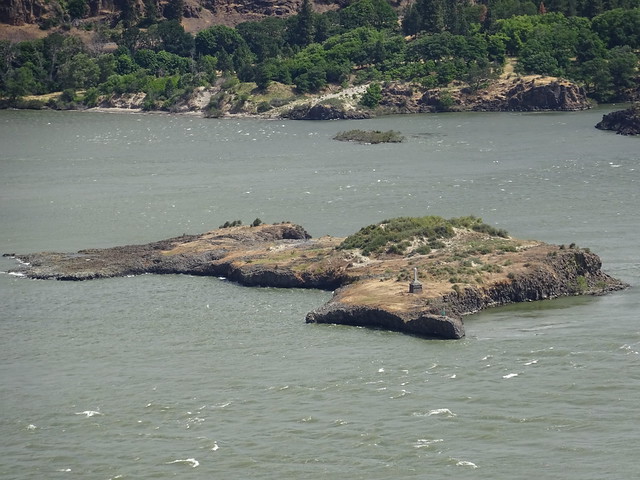 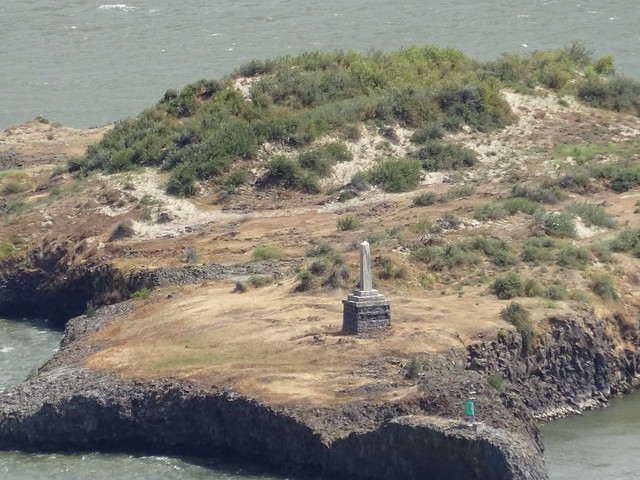 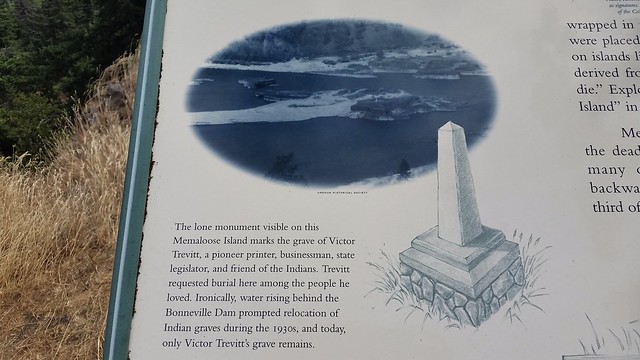 From the overlook we continued west for about four miles to the Rowena Crest Viewpoint.  There are two trails there we intended to hike, however, the wind was just too strong with gusts over 40 mph.   But the view to the east was spectacular! 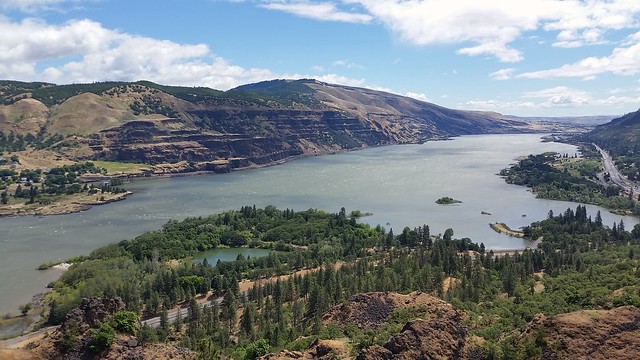 Below the overlook the road goes steeply down through a series of switchbacks. 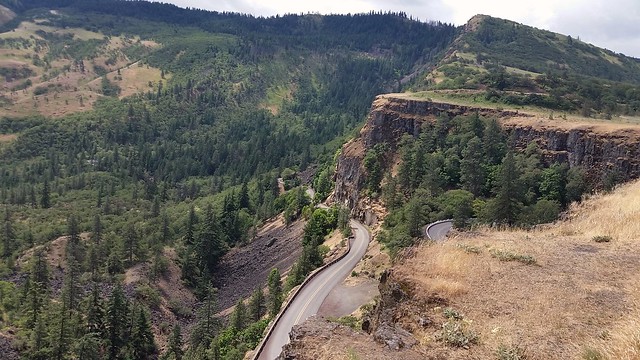 Since it was too windy to hike along the river, we drove south on Rte 35 from nearby Hood River to see if we could catch a view of Mt. Hood.  We lucked out as about 25 miles from Hood River the cloud cover cleared and we were treated to a nice view of the mountain. 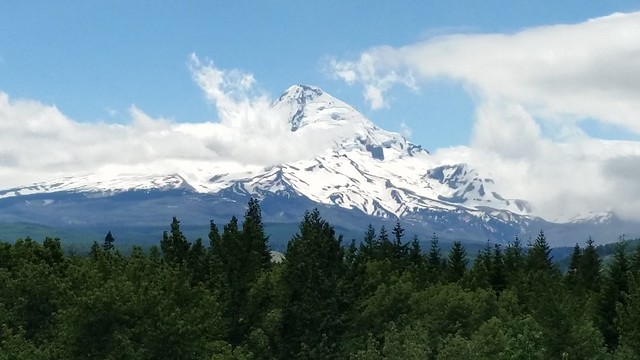 We turned around and drove a few miles back toward Hood River when we came upon the trailhead for Tamanawas Falls.  The wind down in the woods was minimal so we decided to take the two mile hike to the falls. 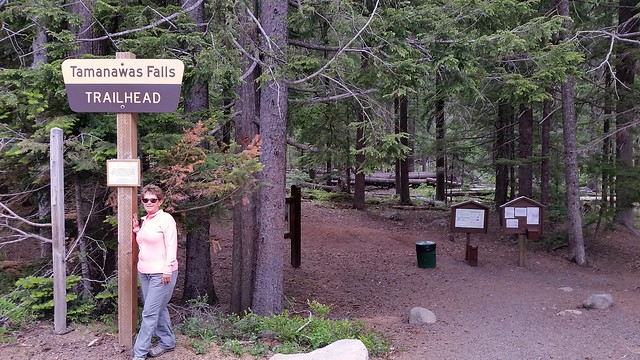 We had never heard of this trail but it turns out that this is a very beautiful hike.  The trail starts right out with a cool bridge that crosses the East Fork of the Hood River. 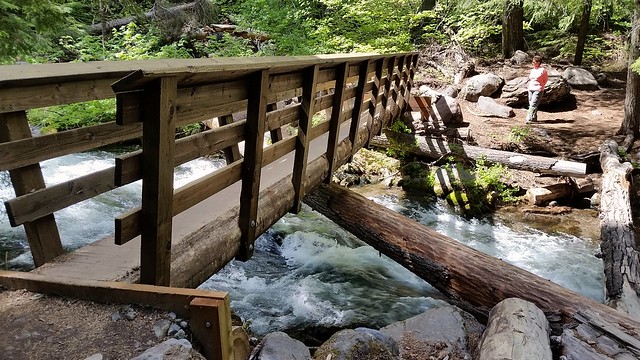 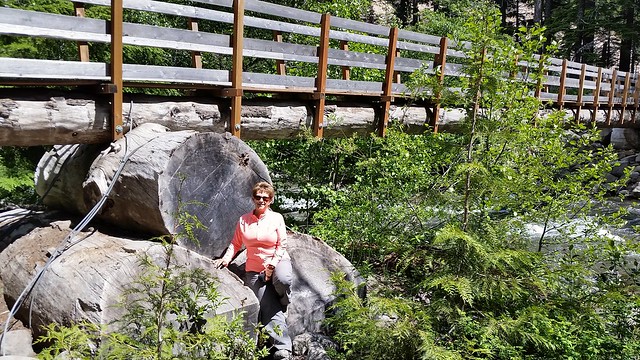 The trail followed the Hood River for about a half mile then turned and followed Cold Spring Creek up to the falls. 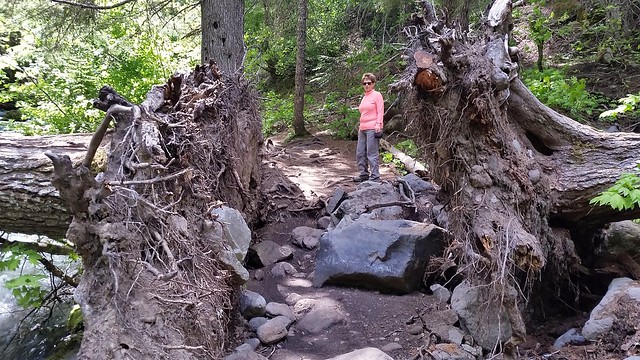 Two trees growing side by side fell in opposite directions 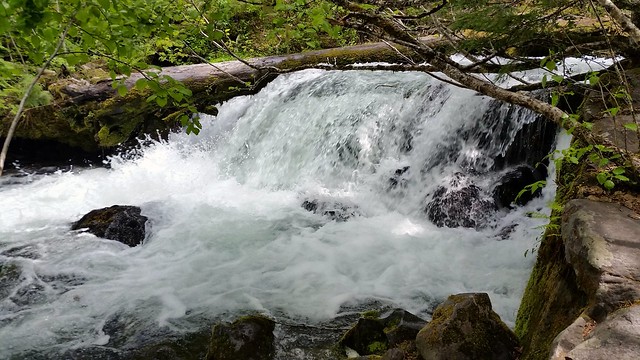 Many small falls dotted the creek as we hiked

A sign at the trailhead told us that a large rock slide blocked the trail near the falls.  We interpreted the wording to mean it was just “past” the falls.  Turns out it is just a quarter mile “before” the falls.  We came to a fork in the trail where the old trail went up to the right.  But a temporary trail to the left led us through the slide area. 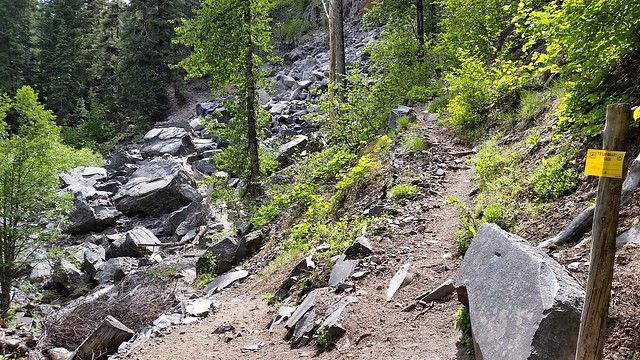 Fork in the trail – the trail should go to the right, the temporary trail goes to the left 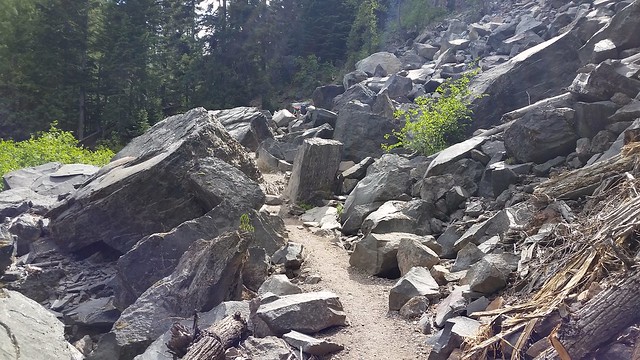 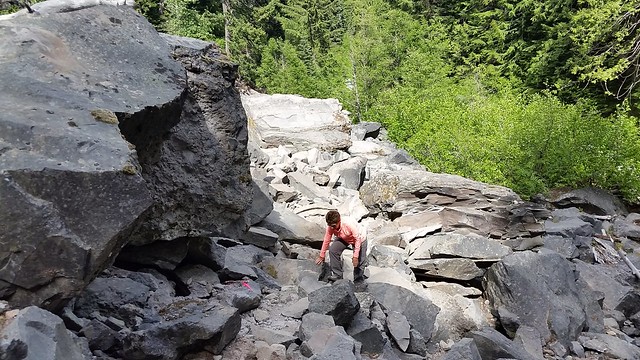 About a quarter mile past the rock slide we came to Tamanawas Falls.  This time of year the flow of water is at its max, making for an impressive sight. 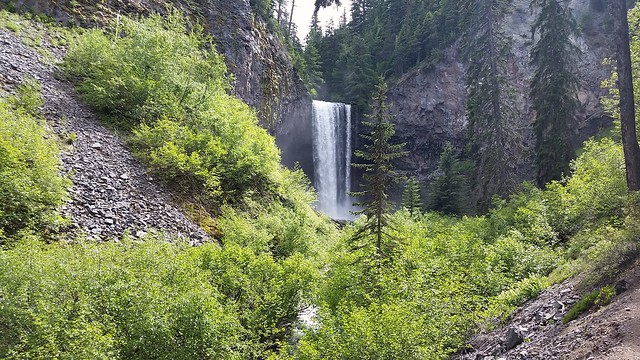 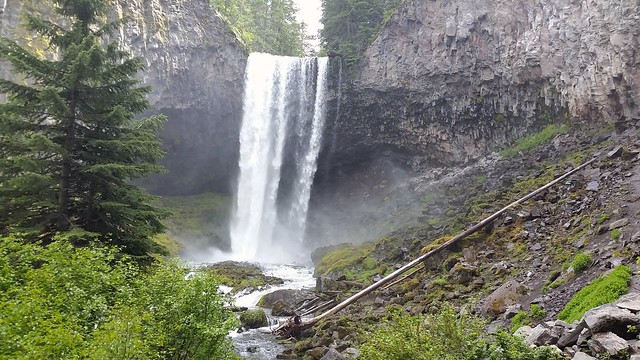 Returning to the town of Hood River we rewarded ourselves with beer and pizza at the Double Mountain Brewery.  Hans and Lisa (Metamorphosis Road) wrote about this place and we agree with their recommendation.  The beer was good and the pizza delicious. 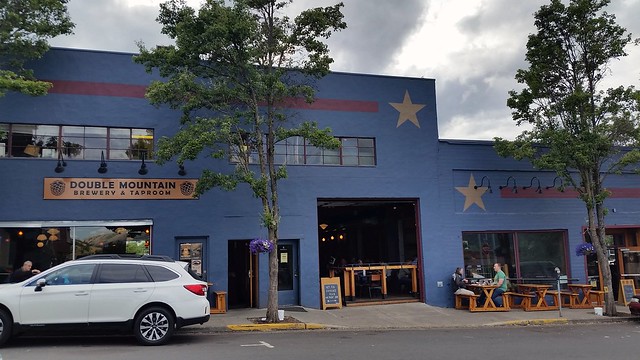 Our next stop will be just northwest of Olympia, WA for a visit to the state capitol.  More on that later . . .

36 Responses to Along the Columbia River – Mosier, OR