The weather was very nice last week so we were able to get out for a couple of hikes.  The first was on the Flatiron Rock Trail.  To get to the trailhead we drove east of Bend on US-20 to mm-16.  There is a sign for the trailhead along the highway and a small parking area. 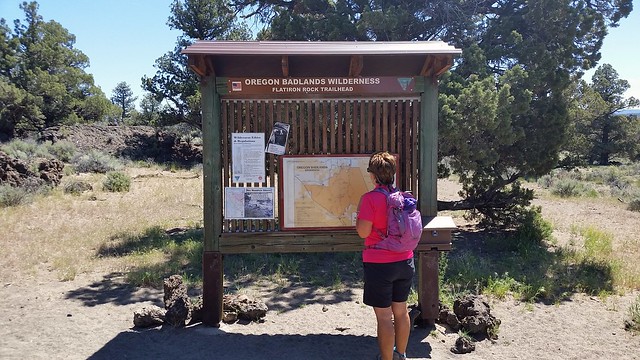 When you venture out to the Badlands just 16 miles east of Bend, you’ll be treated to a harmonious blend of ancient juniper trees, vibrant lichen growing on contorted lava rocks, and a geological history that makes even the dirt under your feet seem interesting.

We found the trail to be interesting but a bit monotonous as we hiked the sand through some cool ancient Juniper trees. 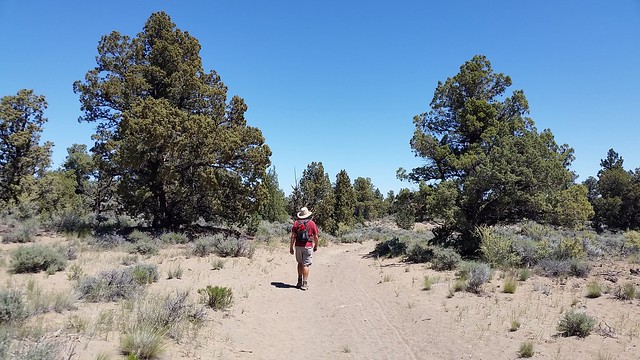 The sign at the trailhead stated that the distance to the formation known as Flatiron Rock was 3.5 miles.  After looking at Google Maps it appeared (to us) that the trail ended there.  So when we came to a sign that said the trail continued straight in front of us we thought we needed to keep hiking. 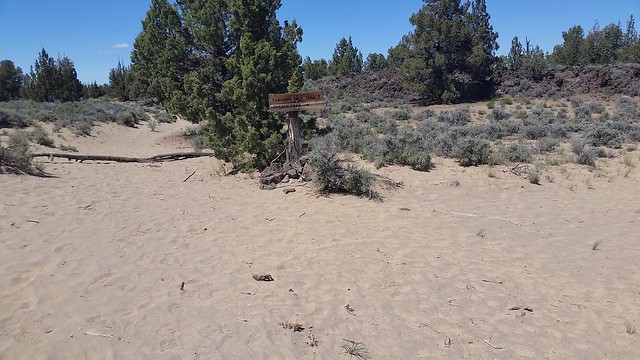 But we should have known something was up when we had to step over a narrow tree limb blocking the trail, a well-recognized sign by hikers to not proceed. 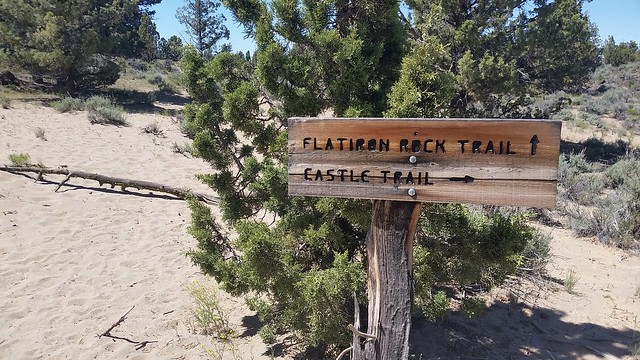 If we had looked to our left, we would have seen a trail leading up into some rocks.  Turns out this is Flatiron Rock and that trail leads up into the formation. 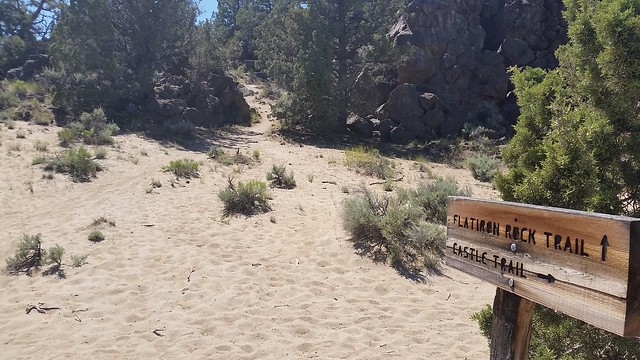 But we followed the sign and kept hiking.  After almost a mile it became apparent that something was wrong.  We held a brief meeting and came up with a brilliant strategy to address our concern – turn around.  Once back at the sign we spotted the side trail and headed up into the rocks. 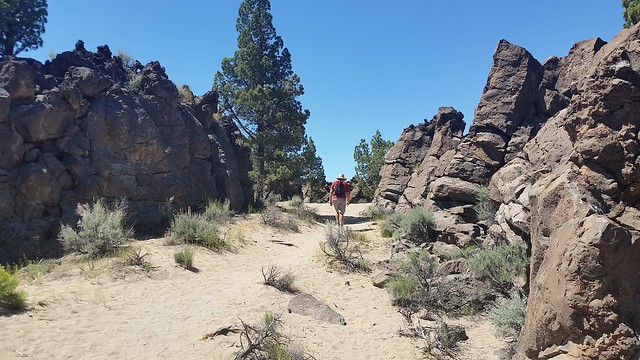 It was only a short hike up to the top of the formation where we had a nice view of the mountains to the west. 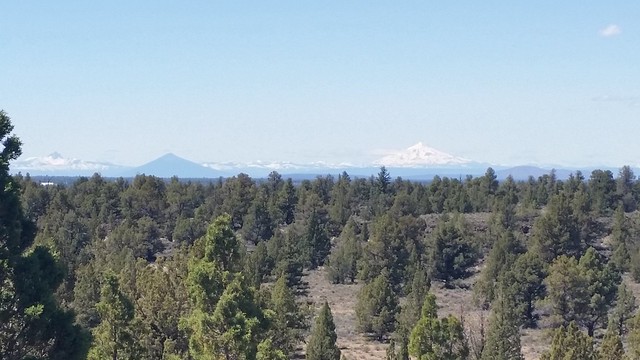 But we found the best view of the mountains was on the ride back to Bend on US-20. 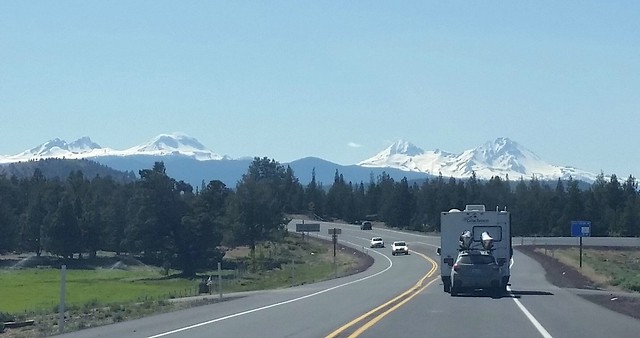 A couple days later we drove about 25 miles north of Bend on US-97 to the small town of Terrebone for a visit to Smith Rock State Park.  The park is famous in the world of rock climbing for the many high rock formations located on a narrow peninsula formed by the Crooked River as it makes an almost 360 degree bend.  The park also has a number of interesting hiking trails at various levels of difficulty.

Once in the park we paid our $5 day use fee and walked over to the small visitor center located inside a Yurt. 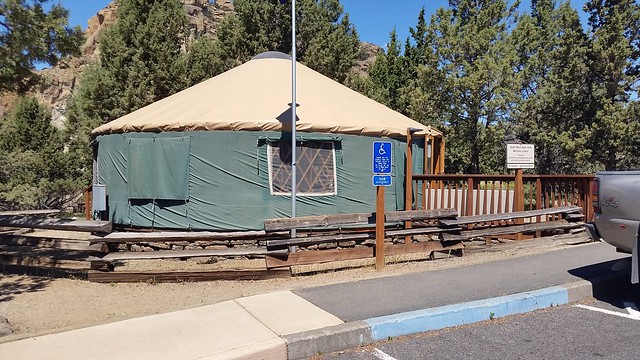 A nice lady in the visitor center gave us a map of the park and described some of the trails available for hiking.  We decided to hike the Misery Ridge Loop, a four mile hike that combines three trails: the River Trail, Mesa Verde Trail, and Misery Ridge Trail.  To access any of the trails in this park the first thing you do is hike steeply down to the river. 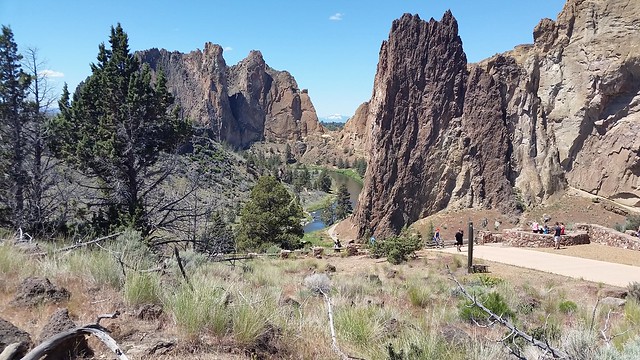 First part of the trail heading down to the river

Once down the hill we crossed a bridge over the river and headed south on the River Trail for a little over two miles. 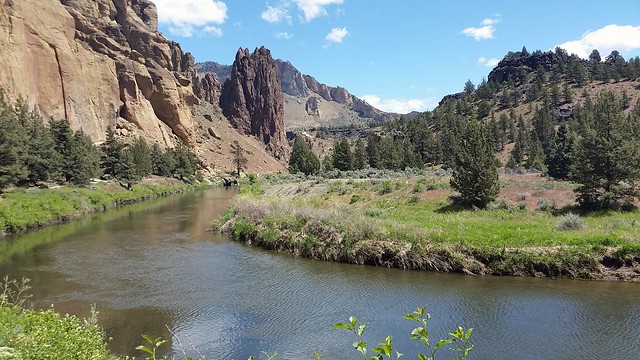 As we said, Smith Rock State Park is a world class climbing area and it seemed that every time we looked up at the rocks we spotted someone.  In the picture below are two climbers who caught our attention. 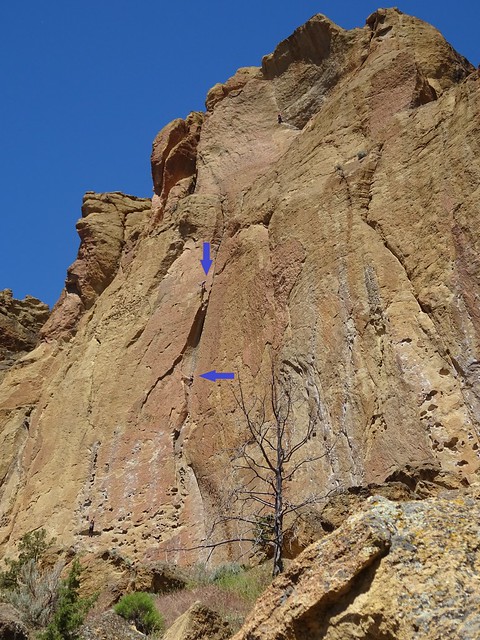 We could hear them talking so we zoomed in on each of them.  The man on top was calling out encouragement to the girl below him 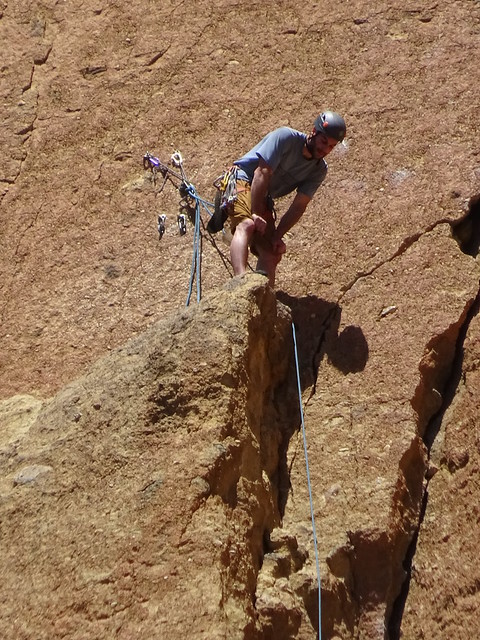 We don’t know if she was new at climbing and a bit frightened, or just tired.  But she just hung there the few minutes we watched them. 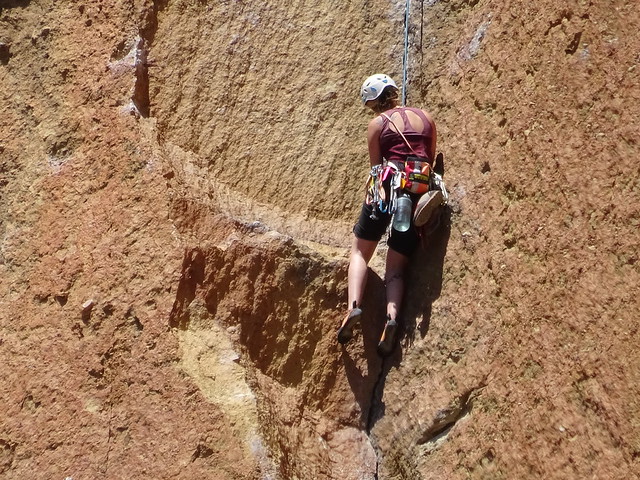 The woman at the visitor center alerted us to a Bald Eagle nest high up in a tall pine across the river from the trail.  Just as we spotted the nest, the male took off before we could get a photo.  We watched for quite a while and were able to spot the female, but couldn’t see the young eight week old eaglet she was watching over. 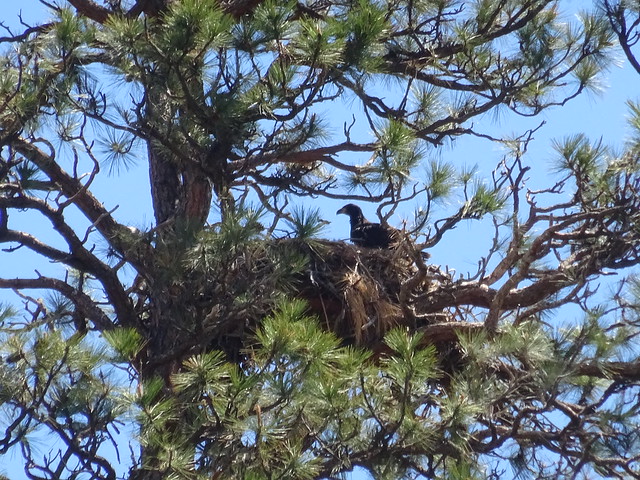 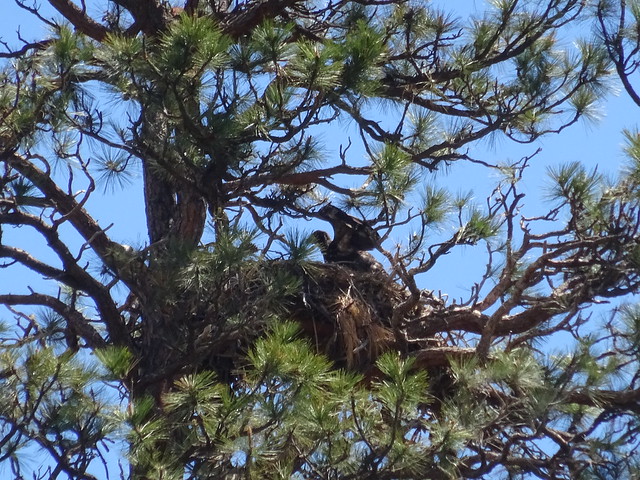 As we rounded the sharp bend in the river and headed back to the north, the rock formation called Monkey Face came into view. 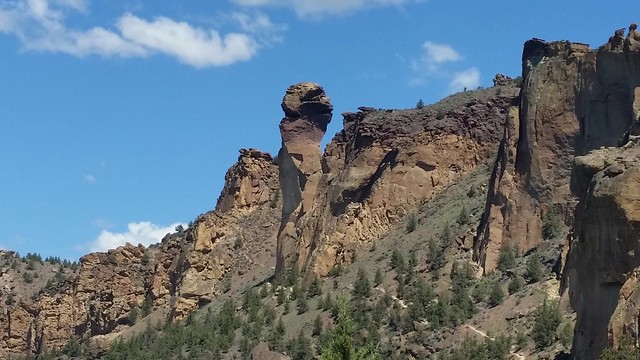 We sat on some rocks near the water and enjoyed lunch with a nice view of the river below us and Monkey Face above us. 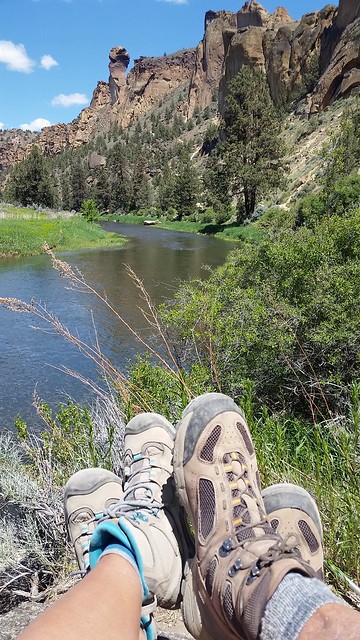 A short distance north of our lunch spot the trail split.  We took the right fork and headed steeply up a half mile on the Mesa Verde Trail.  Monkey Face loomed large in front of us. 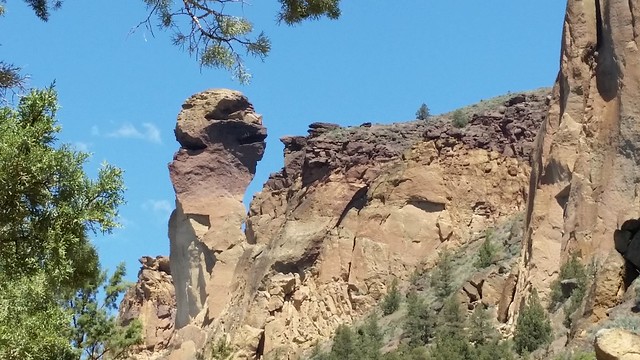 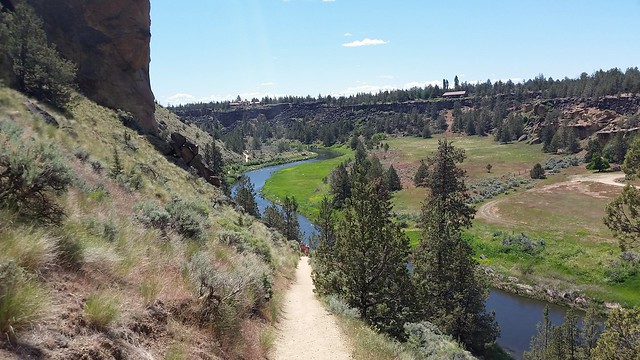 Looking back to the south on the Mesa Verde Trail

After a half mile we again took a right at a fork and began the steep climb up a series of switchbacks going around the other side of Monkey Face on the Misery Ridge Trail. 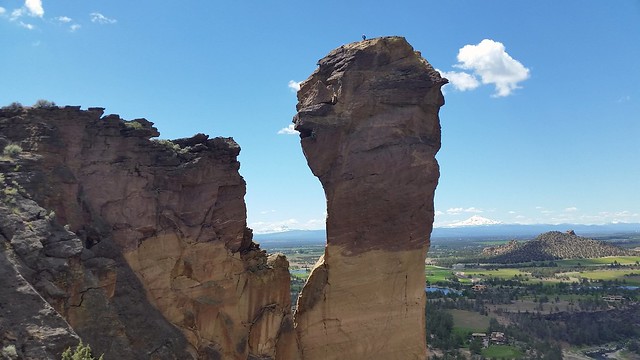 The dot on the top of Monkey Face is a climber 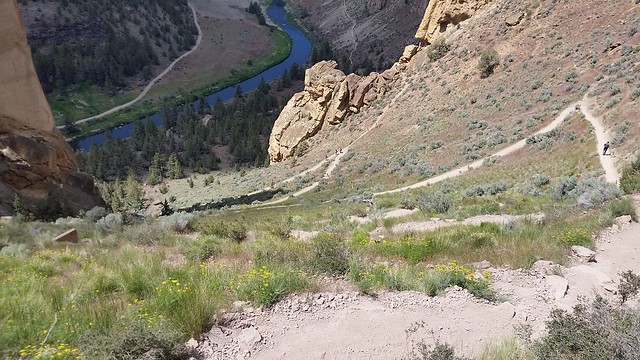 The view looking back down at the switchbacks

It was a long and very steep climb, but the views from the top were impressive. 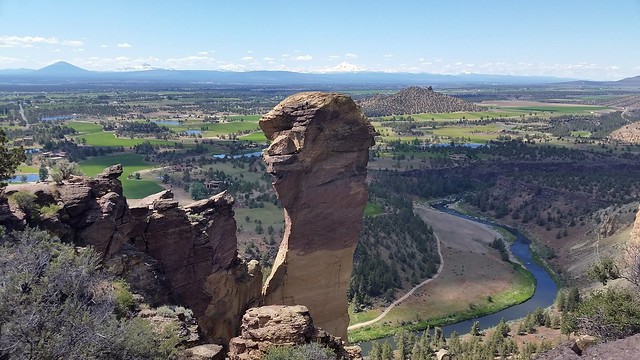 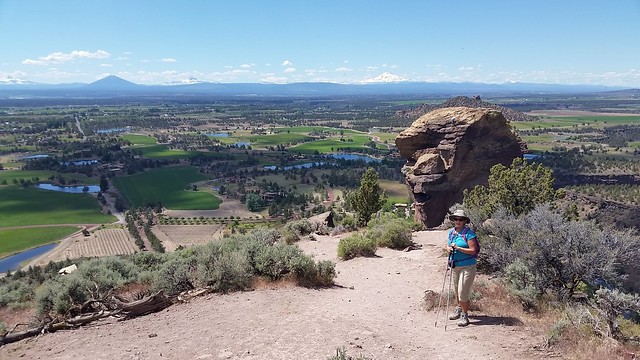 Once at the top we hiked about a quarter mile before the trail headed back down another series of switchbacks on the other side.  Our hiking poles came in real handy as both the trail up and the trail down are on loose gravel, making for some tricky footing. 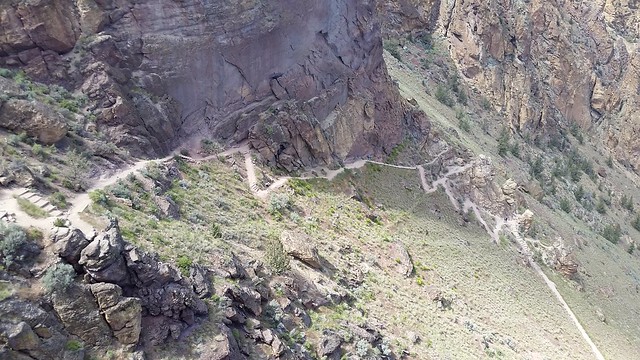 As we made our way down the Misery Ridge Trail the river crossing came into view, along with the trail on the other side leading back up to the visitor center. 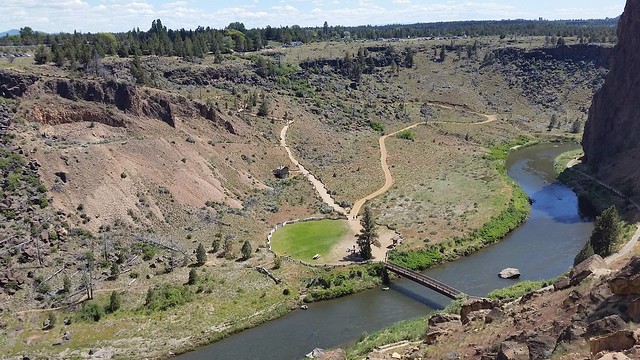 It seemed a bit strange to be hiking down the steep trail and look over to the right to see someone perched on the sheer rock. 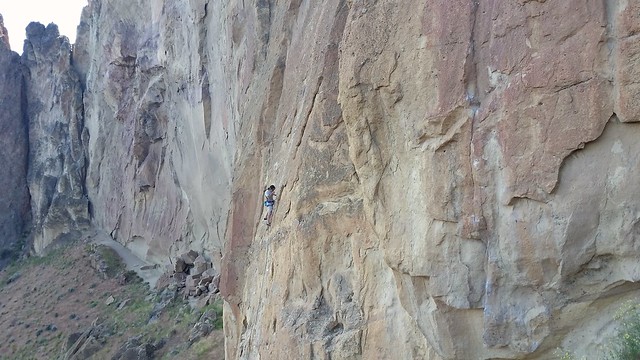 As we made our way down to the bottom a sign alerted us to use caution on the Misery Ridge Trail.  We appreciated the warning! 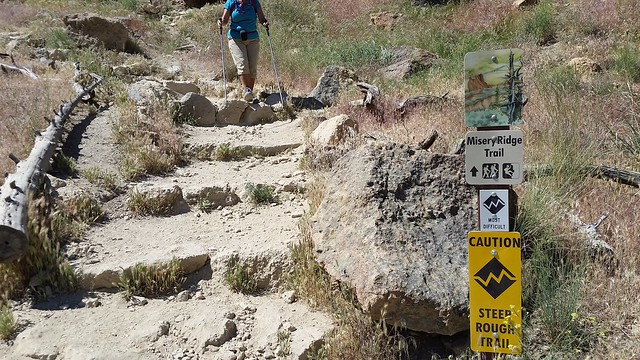 We crossed the bridge over the river and made our way back up the other side.  As we looked back across the river we could see the bottom set of switchbacks we had just hiked on the Misery Ridge Trail. 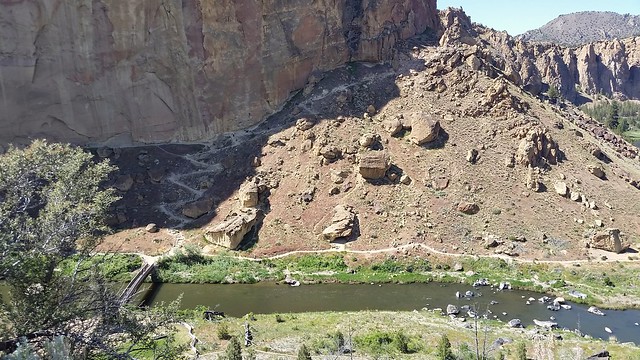 We really enjoyed this hike through Smith Rocks.  We may even return to do the Summit Loop, a seven mile hike that combines four different trails within the park.  More on that later . . .