Hiking to Benham and Dillon Falls – Bend, OR

Spring time in central Oregon is also “bug” time, which means the front of your vehicle becomes covered with them if you drive any distance.  We were especially impressed with the motorhome pictured below after it was driven from Klamath Falls, about 135 miles south of Bend. 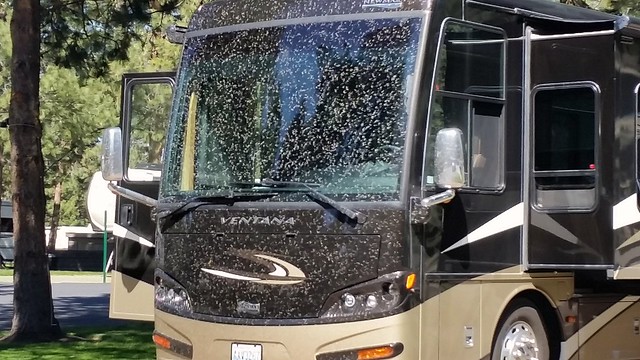 One Saturday evening we met friends, Vic and Pam, at Craft Kitchen and Brewery, located in the Old Mill District overlooking the Deschutes River.  We first met them in Florida when they were still full-timing.  Since then they sold the motorhome and bought a home in Bend, where they are now enjoying life.  We enjoyed a delicious craft beer, some good food, and a couple of hours of great conversation. 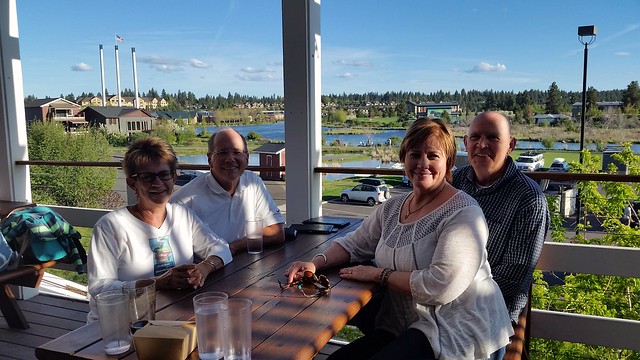 Another day we drove south of Bend for a hike on the Deschutes River Trail.  After driving about ten miles south of Bend on US-97, we turned west at the exit for the Newberry National Volcanic Monument.  The road goes by the monument and led us to the parking area for the trail (called the Benham Falls East Trailhead on Google maps). 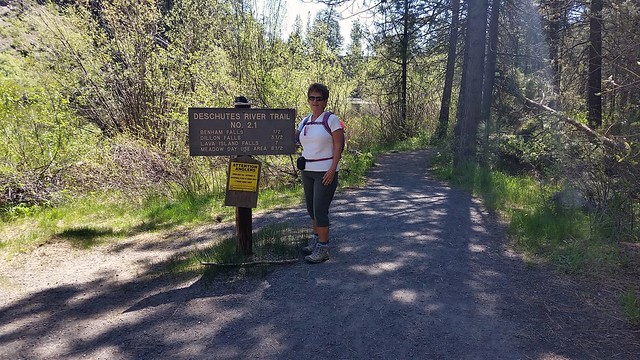 True to its name, the Deschutes River Trail runs along side the river.  At times the river is very tranquil, but the trail passes by two interesting points where the water goes through narrow passages in the surrounding rocks, Benham Falls and Dillon Falls.  We found both to be more aptly called “rapids” rather than “falls,” as there is no steep drop off at either site. 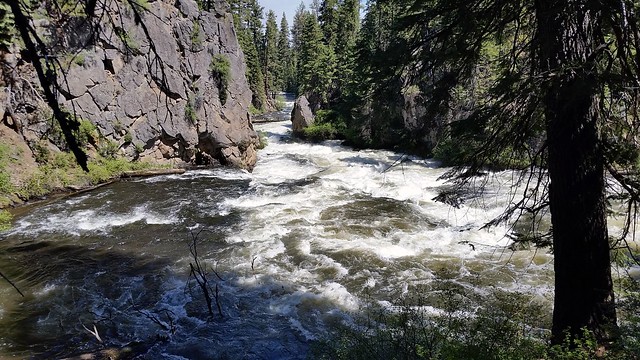 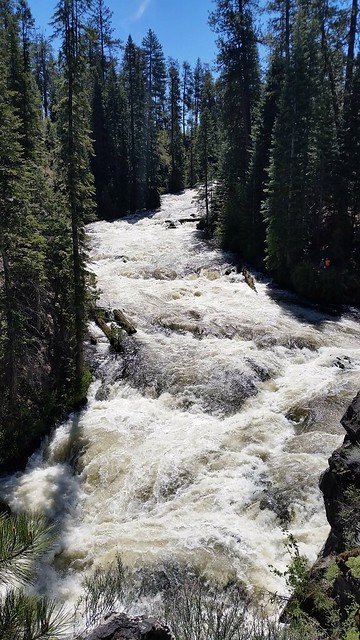 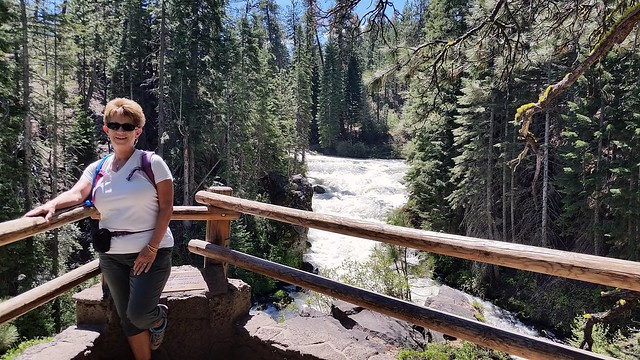 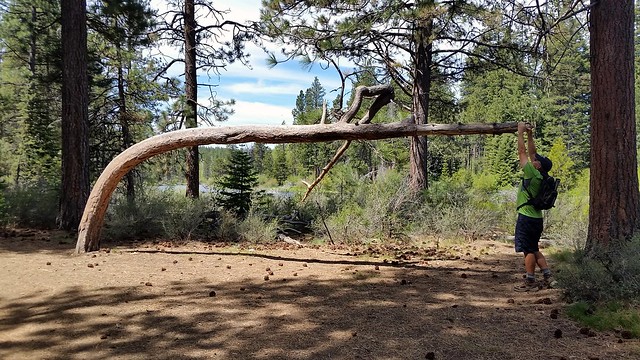 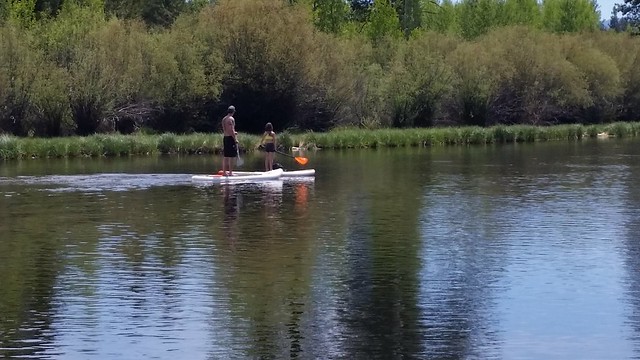 Tranquil spot between the rapids 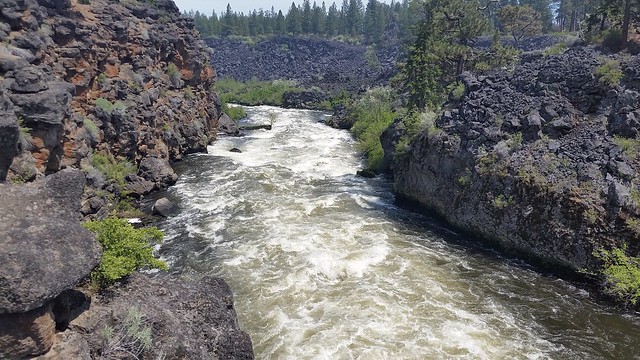 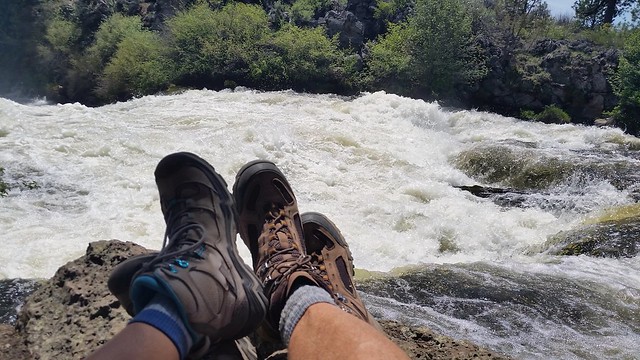 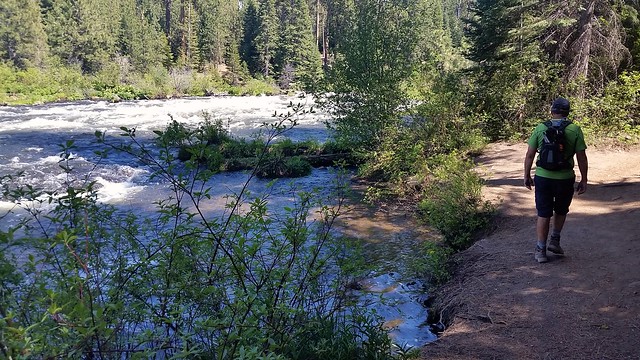 At times the trail is right next to the water 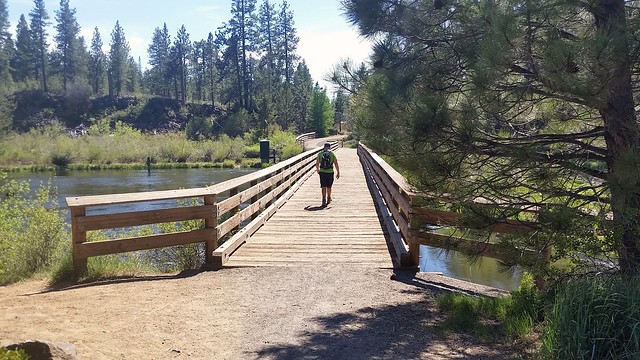 Bridge back to the trailhead

This was a very nice, easy hike that turned out to be a bit longer than we had anticipated.  The sign at the trailhead states that it is 3.5 miles to Dillon Falls.  We found the distance to actually be 4.6 miles one way, adding over two miles to the hike.  Fortunately, the trail follows the river so it is fairly flat with no energy sapping elevation changes.

Next up, a hike in Smith Rocks State Park!  More on that later…

31 Responses to Hiking to Benham and Dillon Falls – Bend, OR