We left the rocks of Moab, UT Monday morning and headed toward Salt Lake City.  As we drove north the rocks of Moab gave way to the snow covered peaks of the Manti-La Sal National Forest north of Price, UT. 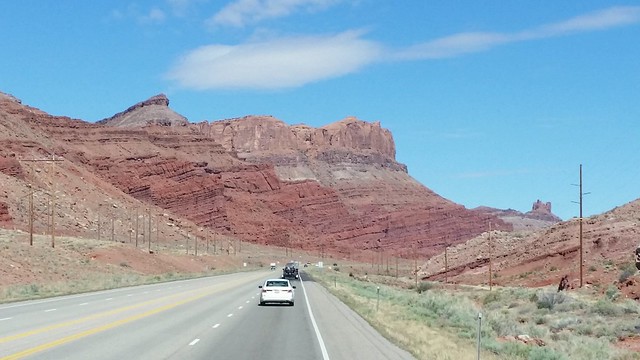 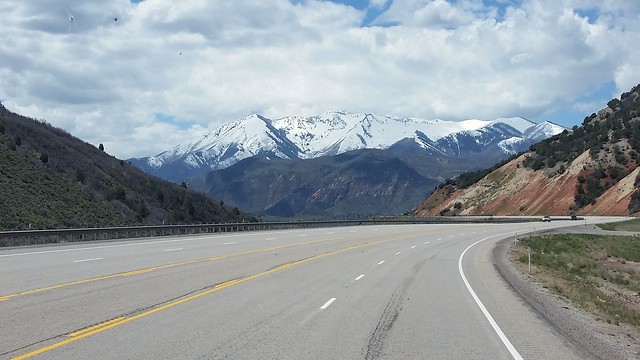 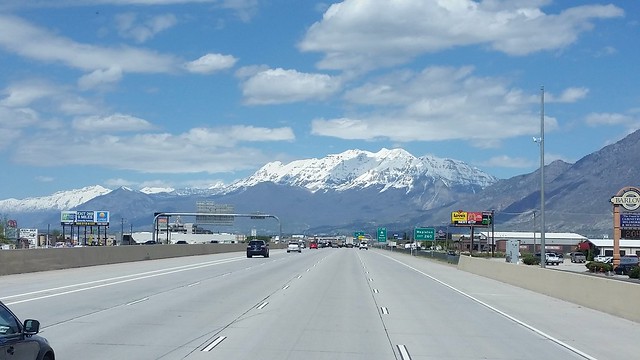 We drove about 250 miles that day and spent a nice, quiet night parked in the new Cabela’s in Farmington, north of Salt Lake City.  The new Station Park shopping area right across the street has a variety of restaurants and a one of those nice chain coffee shops from Seattle!

It rained that night so the next morning we had to wait a few hours for the roads to dry.  But with that coffee shop nearby we had no difficulty with the delay.  Then, it was off to Idaho! 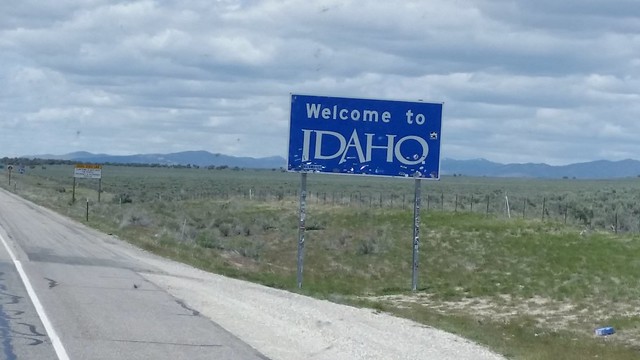 We had a reservation for two nights at 93 RV Park just west of Twin Falls.  We’ve never been to Twin Falls and wanted a day to explore the town.  Twin Falls is located on the southern side of the Snake River Canyon and appeared to have some interesting things to see.  Our first stop the next morning was at the visitor center located along the canyon on US-93 as you enter the city. 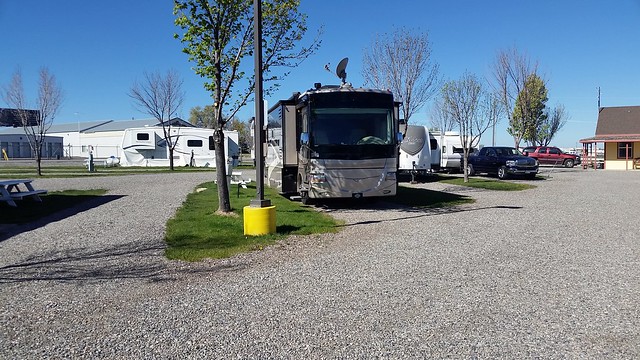 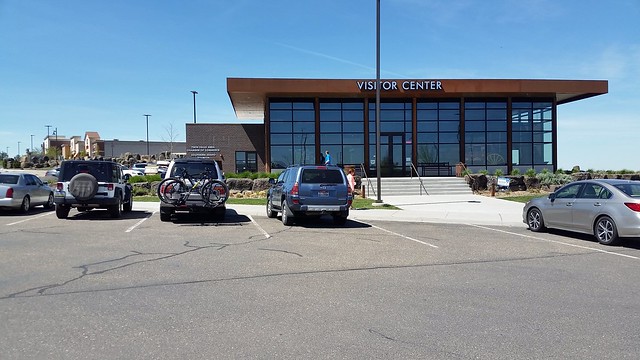 From the visitor center you get a great view of the Perrine Memorial Bridge, a four lane truss bridge 1,500 feet long and 486 feet over the Snake River. 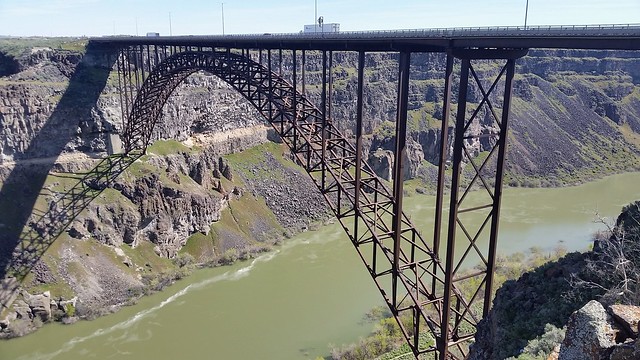 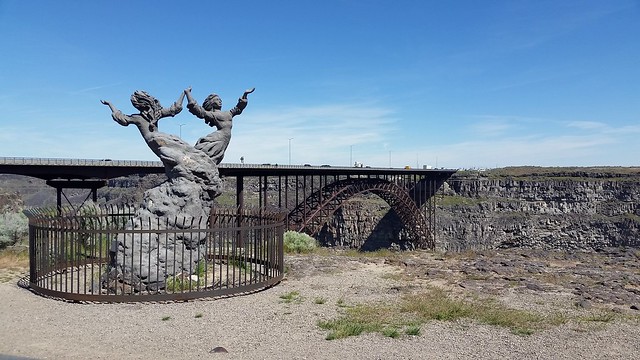 “The Twins” sculpture in Twin Falls

While at the visitor center we came upon a group of people wrapping parachutes on the small lawn next to a bridge view overlook.  It turns out that this bridge is the only man-made structure in the United States where BASE jumping is allowed year-round without a permit.  BASE jumping is parachuting or wingsuit flying from a fixed structure or cliff. “BASE” is an acronym that stands for four categories of fixed objects from which one can jump: building, antenna, span, and Earth (cliff). 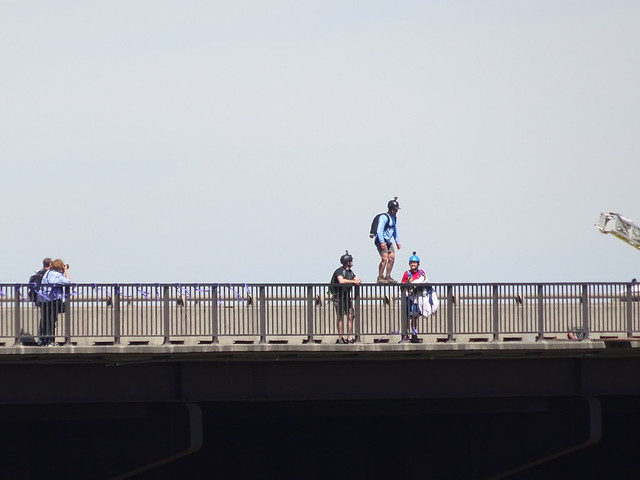 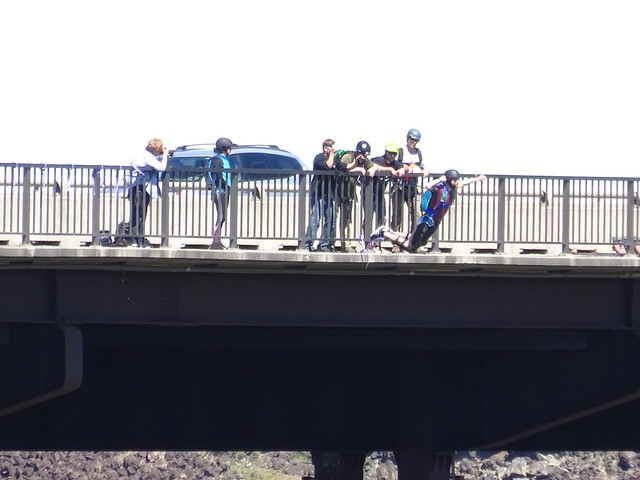 We observed two different “styles” used in dealing with a parachute.  One is to fold it up in a pack, like the jumpers in the photos above, then free fall briefly before pulling a cord to release the chute.  The other is to hang an open chute over the railing and allow it to fill with air, then jump.  We couldn’t decide which method we should use so we just watched for a while. 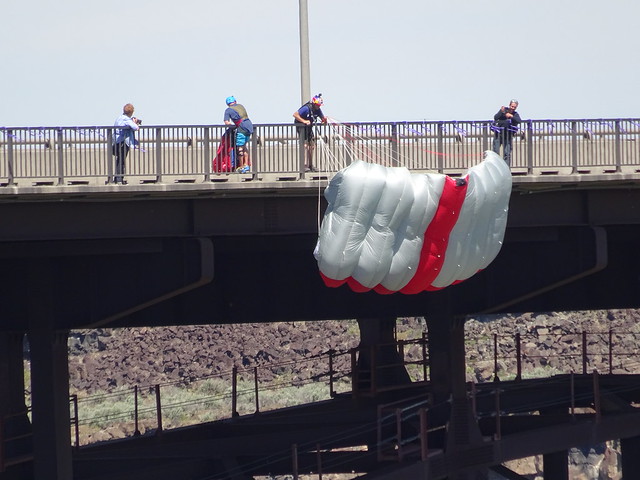 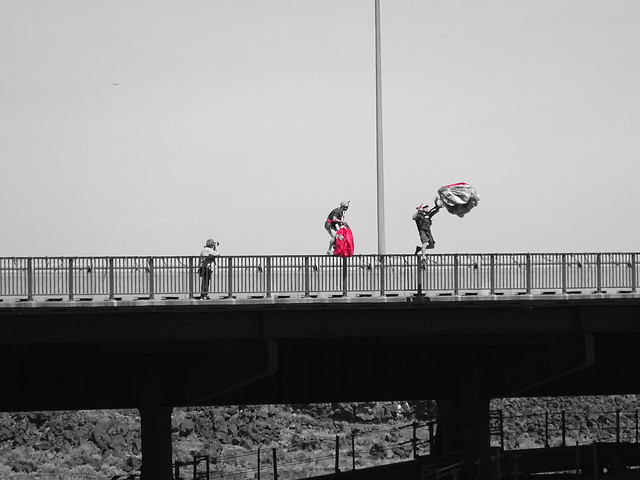 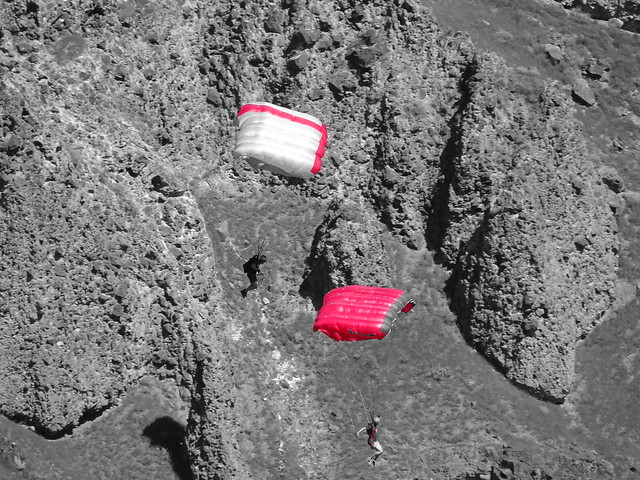 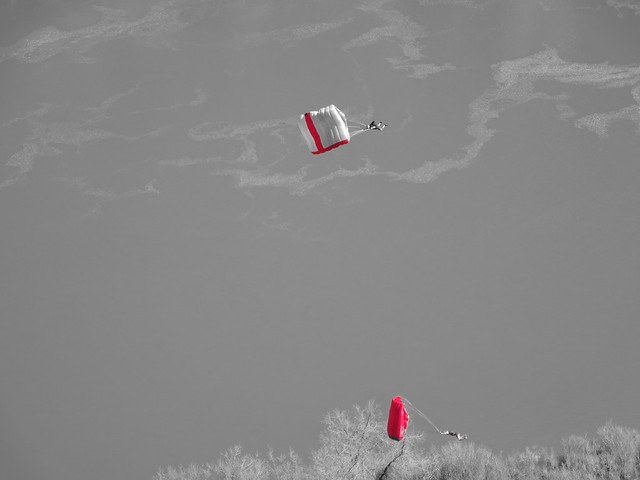 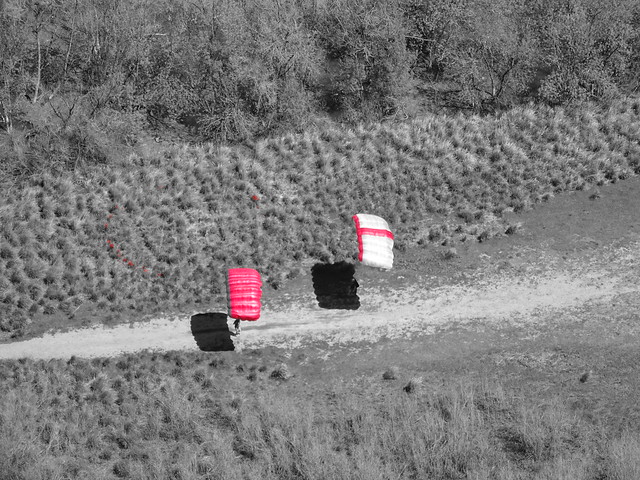 Wide landing area along the river

After watching numerous jumps off the bridge, we drove about five miles to the east for a visit to the major tourist attraction in Twin Falls, Shoshone Falls. 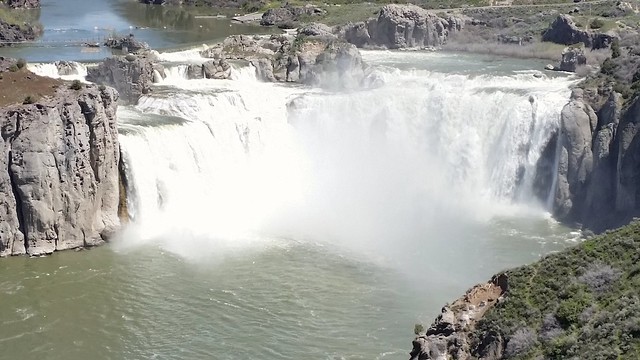 Sometimes called the “Niagara of the West,” Shoshone Falls is 212 feet high, 45 feet higher than Niagara Falls, and flows over a rim nearly 1,000 feet wide. 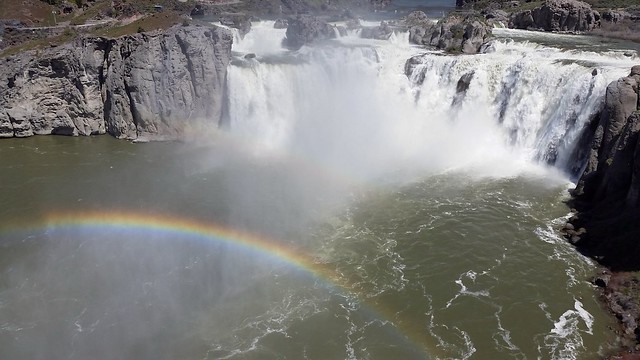 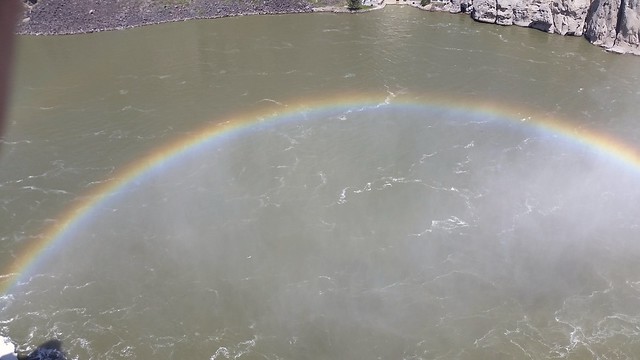 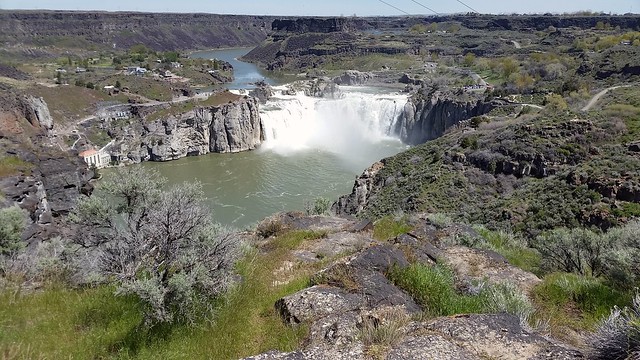 While at the observation area for the falls, we overheard someone say that the river was at its highest level since 1997, which made for a spectacular scene.  In drier years, especially at the end of the summer, the flow of water is so small that all of it goes into the adjacent power plant and the “scenic” section is virtually dry.  Below is a photo we found from a drier time.  Compare it to the photo above.

There is a paved two mile biking/walking trail that leaves from the parking area near the falls that winds its way steeply up to the top of the cliff.  As you reach the top of the cliff you can see a large mound of dirt about a quarter of a mile to the west.  This mound is the remains of a stunt attempted by daredevil Evil Knievel. 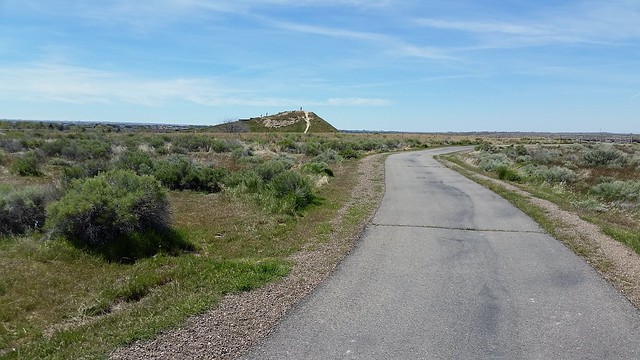 In September of 1974, Knievel attempted to jump over the canyon on a rocket-powered motorcycle.  Knievel and his team leased land on both sides of the Snake River and built a large earthen ramp and launch structure.  A crowd of 30,000 gathered to watch Knievel’s jump, which failed because his parachute opened too early, causing him to float down towards the river.  Knievel likely would have drowned were it not for canyon winds that blew him to the river bank.  He survived with only a broken nose. 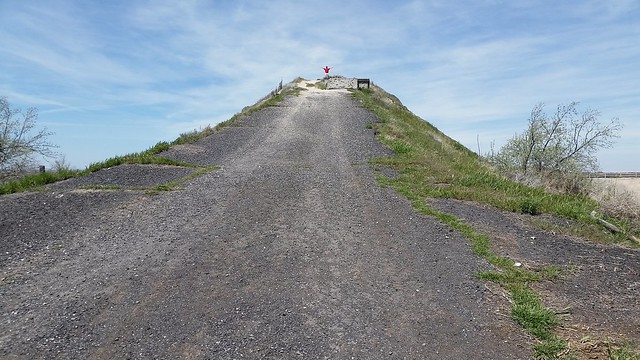 The ramp today (John is on the top) 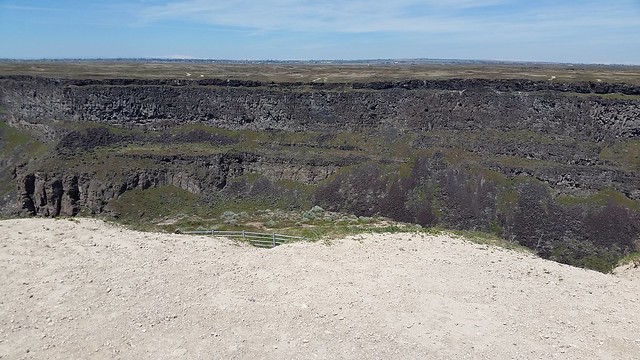 The view across the canyon from the top of the ramp

We returned back down the path to the Jeep and drove about three miles further east to visit the actual Twin Falls.  The falls no longer has a twin as the southern portion was closed off to accommodate a power plant. 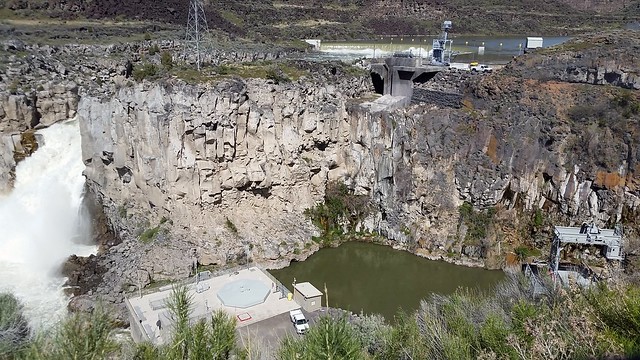 There was one more set of falls to visit in the area.  To get to a spot where we could view the Pillar Falls, we drove back into the city, crossed the Perrine Bridge, and made a right turn on to Shoshone Falls Road.  After two miles we turned off the road on to a dirt trail that leads to the north edge of the Snake River Canyon. 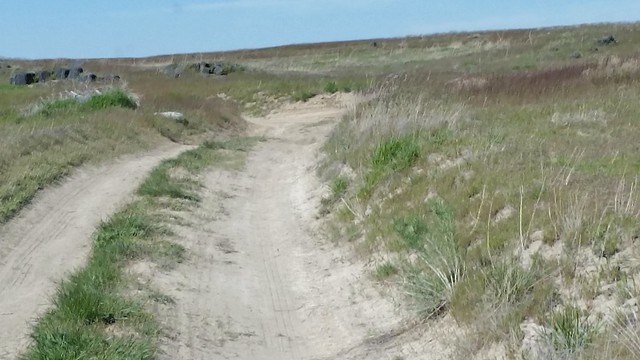 A high clearance vehicle is needed for this short path

We were a bit underwhelmed with the Pillar Falls.  Maybe it should be called the Pillar Rapids! 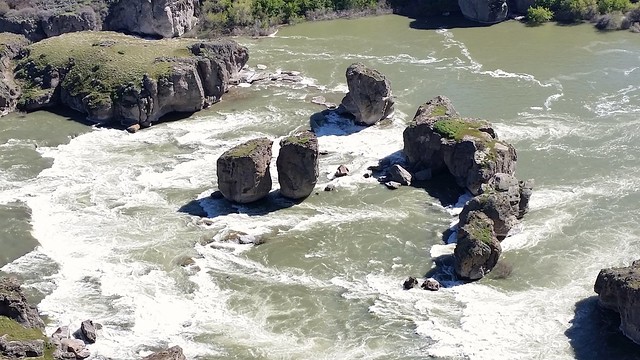 From the Pillar Falls viewpoint we had a great view of both the Shoshone Falls and the Knievel mound to our east. 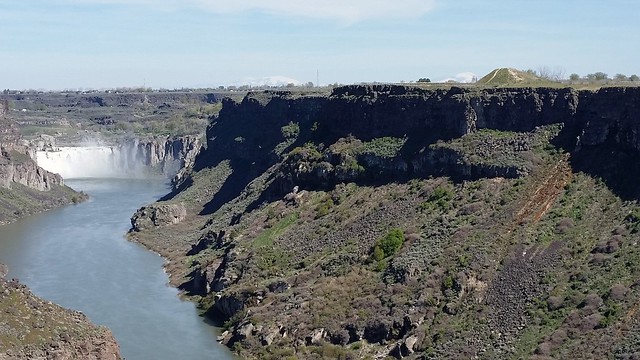 We only spent one day in Twin Falls but really enjoyed the scenic spots along the Snake River.  Now it’s time to continue our journey to the west.  Next up is a stay in Caldwell for a visit to nearby Boise, ID.

37 Responses to From Moab, UT to Twin Falls, ID