For our second adventure in the Bluff area we headed up on Cedar Mesa for a hike to the Moon House Ruins.  We did this hike three years ago and tried to do it again with David and Karen two years ago.  You need a permit from the Kane Gulch Ranger Station and the number of permits issued each day to the Moon House Ruins is limited to 20.  When we arrived there two years ago all the permits had been issued for that day.  So this year we called ahead and reserved four permits.

The Kane Gulch Ranger Station is 50 miles from Bluff, so the four of us headed out early the day of the hike.  We headed south on US-191, continued on US-163, and turned right on to UT-261 to the ranger station.  Once we obtained our permits we headed back down UT-261 six miles and turned east on Snow Flats Road. 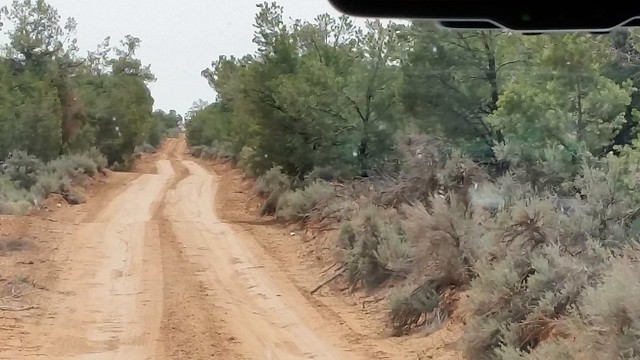 Snow Flats Road is a maintained dirt road that can be driven by any vehicle with decent clearance.  After eight miles we came to a left (north) turn onto a smaller road.  There is a small parking area there as a high clearance vehicle is recommended for the last mile drive to the trailhead.  We found this road to be in great shape so most vehicles could drive it. 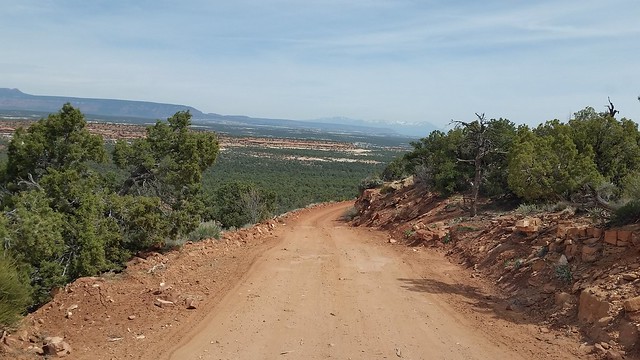 While the hike to the ruins is only a mile and a half, the trail first goes over flat slickrock before dropping steeply down into a canyon. 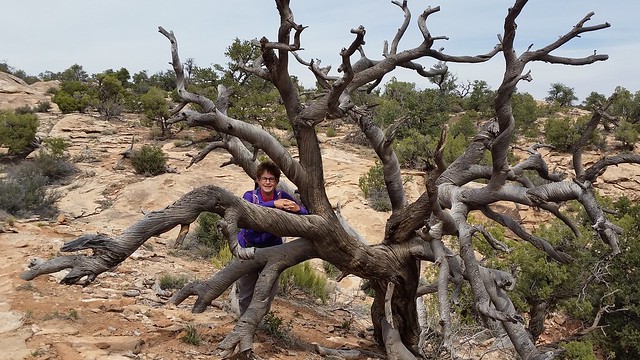 Tree sculpture along the first part of the trail 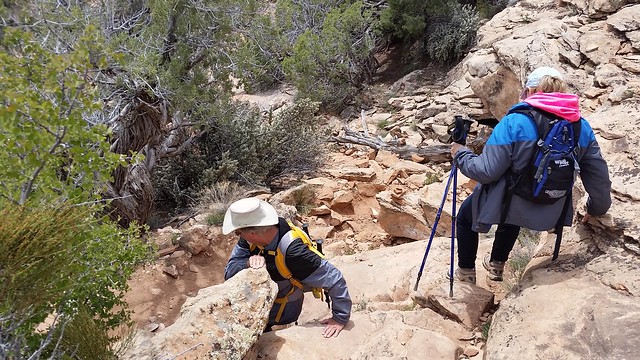 David and Karen head down into the canyon

At one point the trail goes over a rock ledge.  Although rocks have been piled below the ledge, that last step is a bit tricky.  But we carry a rope that we tied around a strong bush, making the drop down (and back up) much easier.

Once over the ledge we could see the ruins across the canyon.

We followed the winding trail down to the bottom of the canyon, then hiked steeply up a wide area of slickrock into the ruins.  We had the place to ourselves. 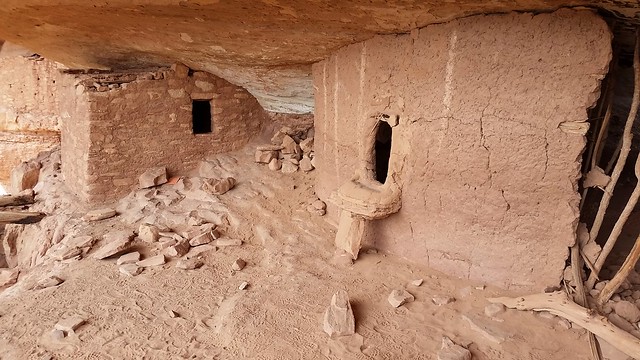 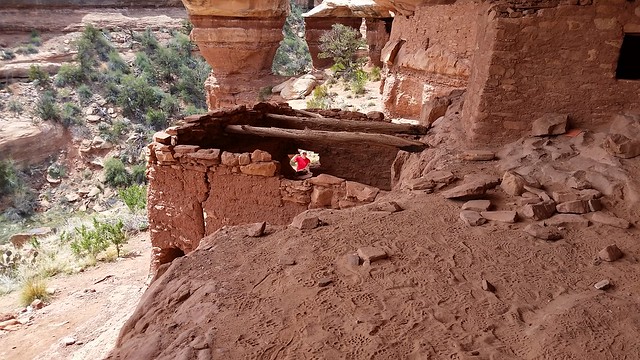 One of the neat features of the Moon House Ruins is that you are permitted to climb through a low doorway leading to an interior hallway. 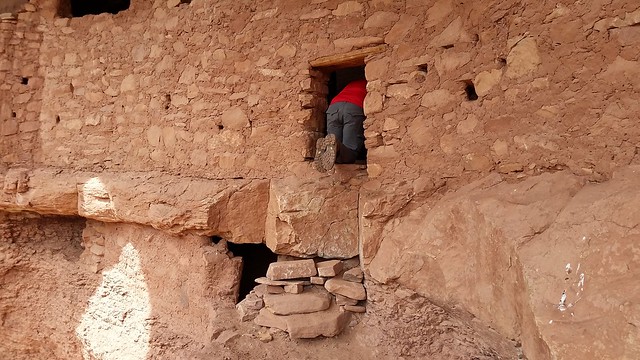 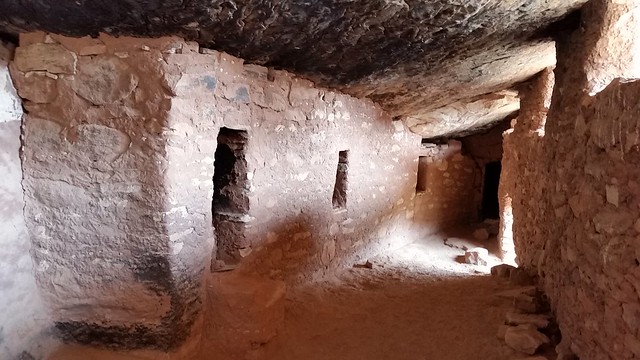 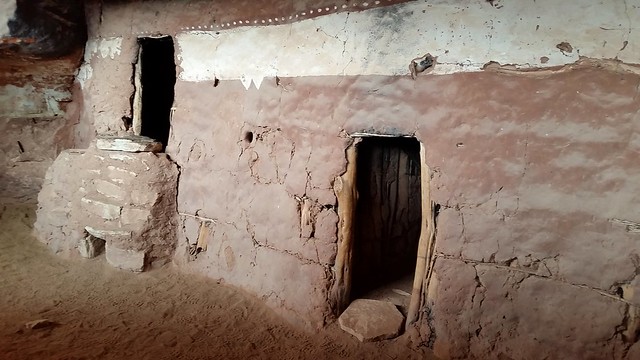 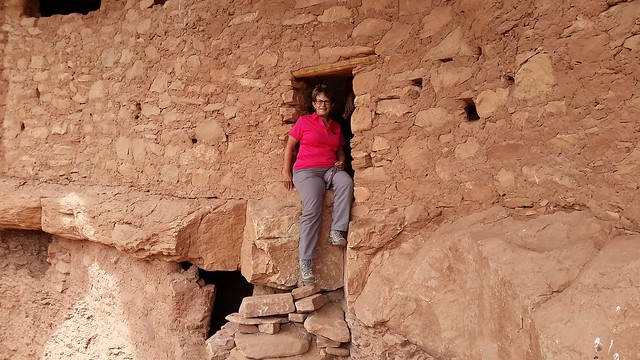 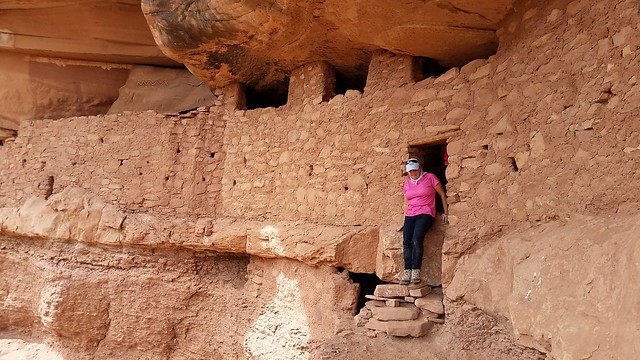 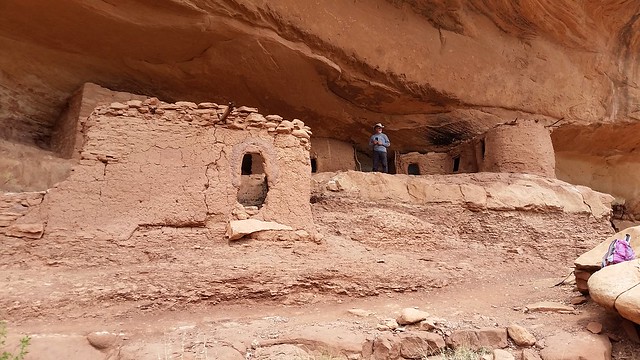 Walking east away from the first set of ruins on a wide ledge, we rounded a bend and came to a second set of ruins.  In the photo below you can see that the room on the left is very crude, while the longer portion to the right shows distinct improvement in building skills.  This indicates that the ruins were built in two different time periods. 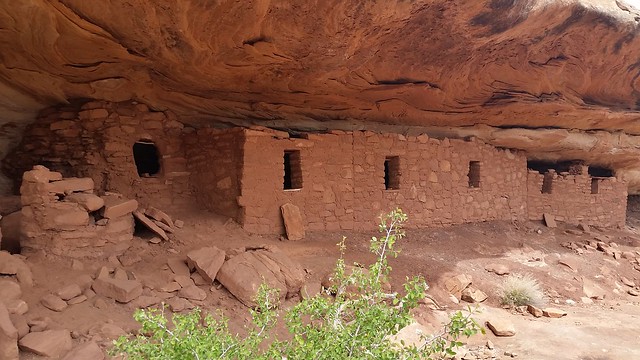 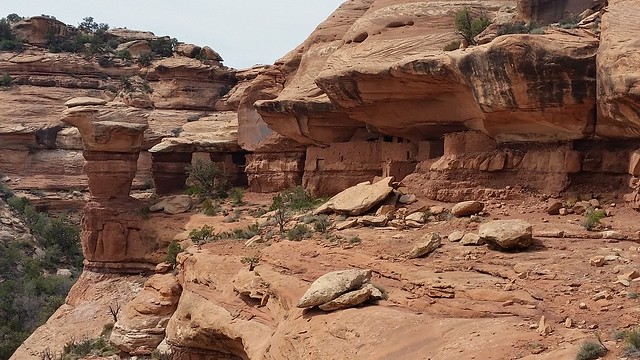 Looking back toward the first set of ruins 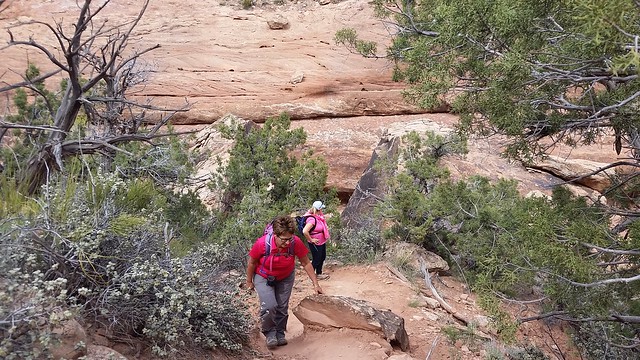 Heading back up the steep canyon on the return hike

Once back on the main road we headed south toward Bluff.   UT-261 is a nice paved road but it includes three miles of unpaved, but well graded, switchbacks descending 1100 feet from the top of Cedar Mesa called the Moki Dugway.  We went up the Dugway on our way to the hike but didn’t stop to take any pictures.   On the return trip we stopped a couple of times and took advantage of the great views. 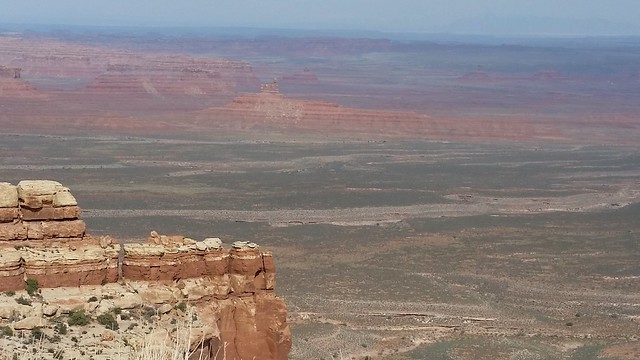 Valley of the Gods in the distance 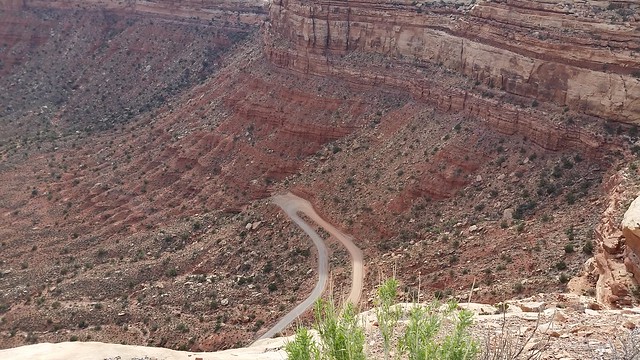 One of the switchbacks 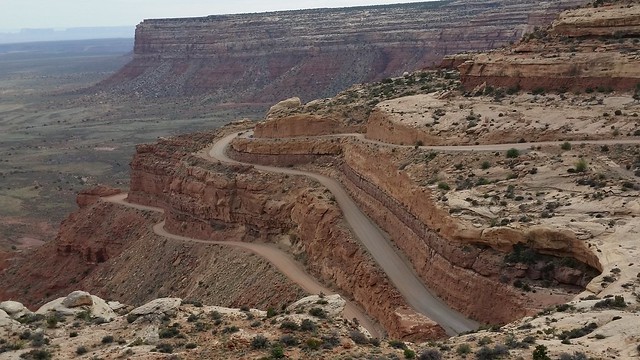 No pets are allowed on the trails in Cedar Mesa so Cody had to sit this one out.  This did not make him very happy, so he will be more than ready for the next hike!  More on that later . . .