On Monday morning we left Milan, NM and drove about 130 miles to Santa Fe.  We had been out hiking and exploring a number of days in a row so Pam told John he could have the afternoon off after we arrived in Santa Fe.  He had visions of spending some time in a nearby chain coffee house completing the daily crossword puzzle.  But after setting up at the RV park, Pam looked at the weather forecast and found rain predicted for the next two days.  Cancel that afternoon of rest, we’re off to check out Tent Rocks National Monument! 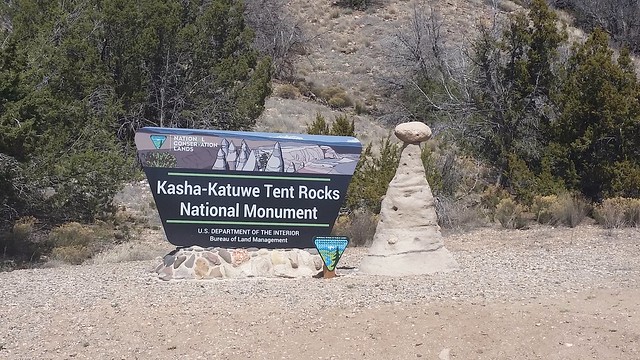 Kasha-Katuwe Tent Rocks National Monument, located 40 miles southwest of Santa Fe, is a Bureau of Land Management (BLM) managed site that was established as a U.S. National Monument in 2001.  Kasha-Katuwe means “white cliffs” in the Pueblo language Keresan.  The area owes its remarkable geology to layers of volcanic rock and ash deposited from a volcanic explosion 6 to 7 million years ago.  Over time, weathering and erosion of these layers has created canyons and tent rocks. The tent rocks themselves are cones of soft pumice and tuff beneath harder caprocks, and vary in height from a few feet to 90 feet. 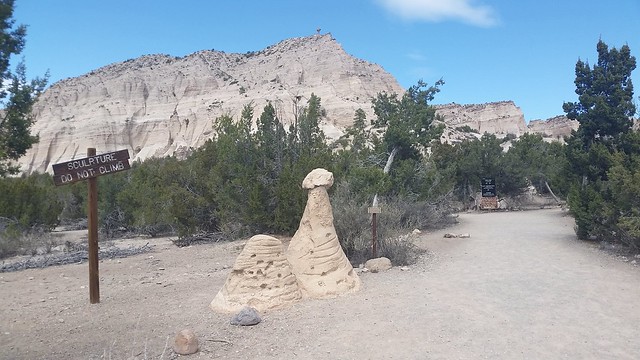 A sculpture marks the beginning of the trails

There are two trails in the monument, both begin from the main parking area.  The Cave Loop Trail is 1.2 miles long and is rated as easy.  A half mile up the Cave Loop Trail the more difficult Canyon Trail branches off.  It is 1.2 miles long and goes through a slot canyon before heading steeply up 630 feet to the top of a mesa where the tent rocks may be viewed from above. 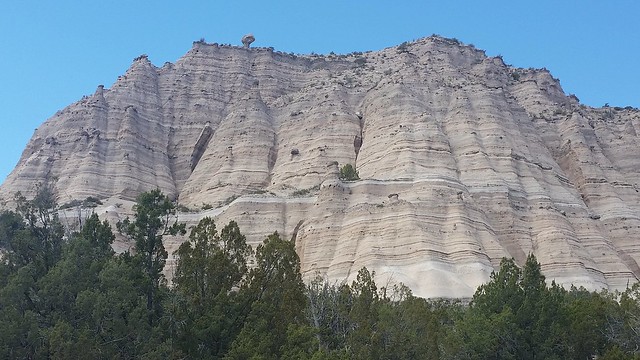 White cliffs along the beginning of the trail 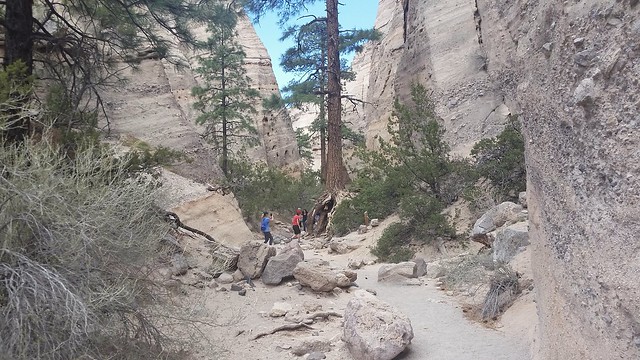 Heading into the Canyon Trail 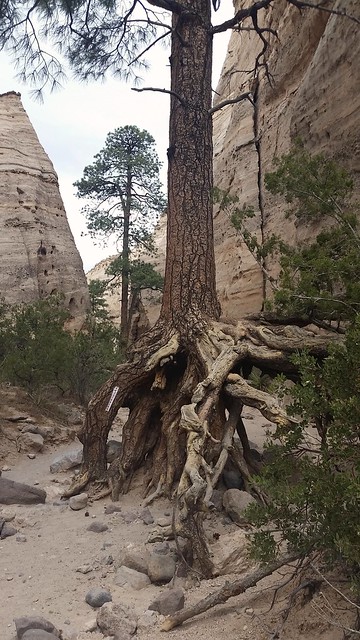 Erosion from the wash 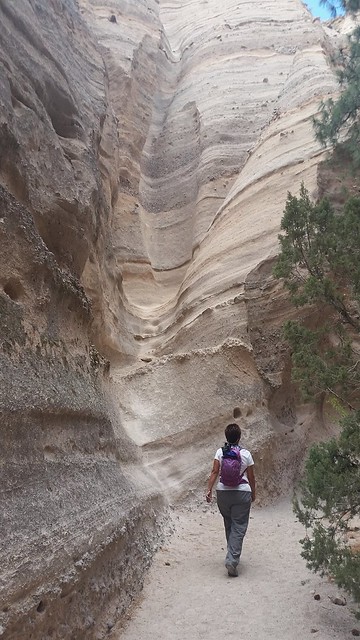 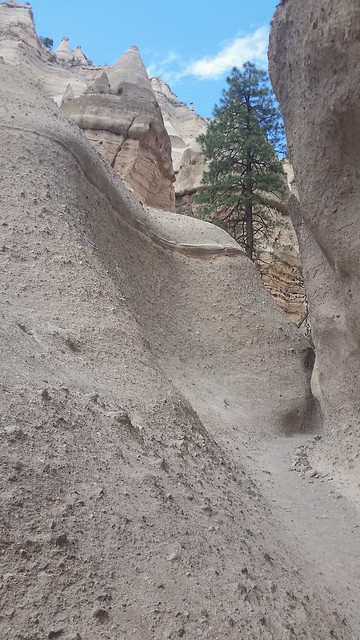 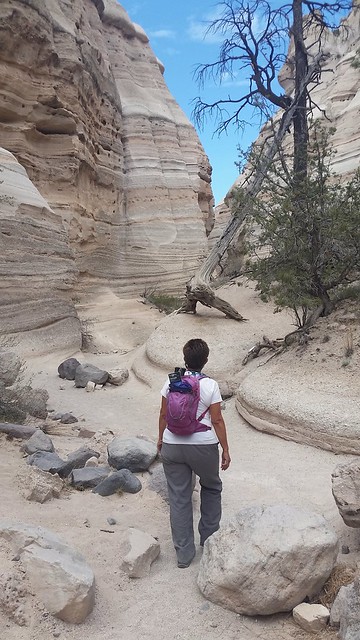 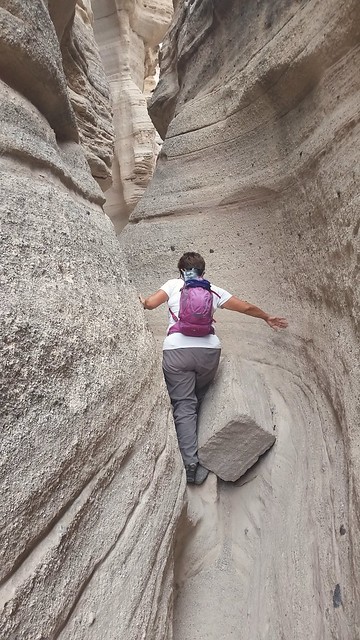 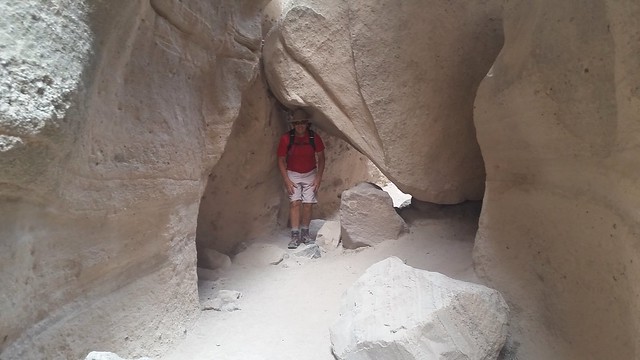 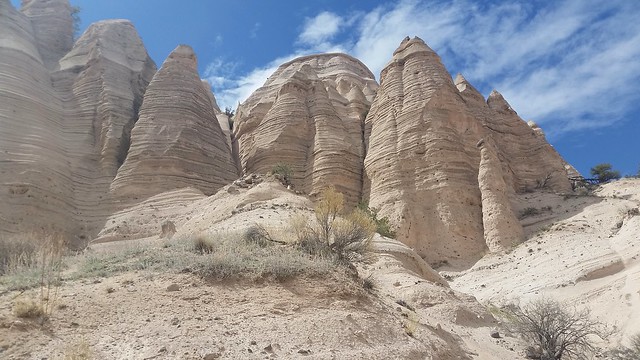 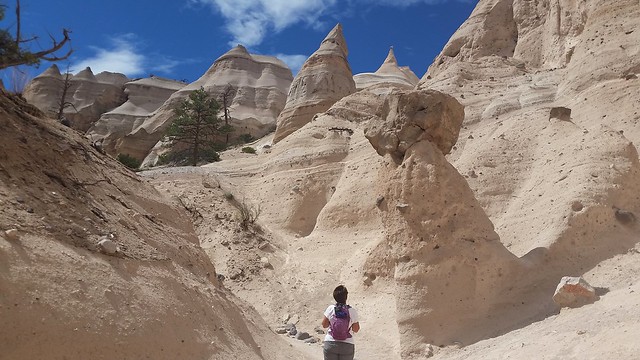 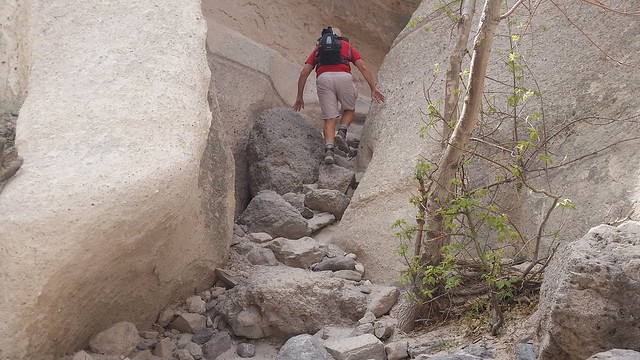 Heading steeply up to the mesa 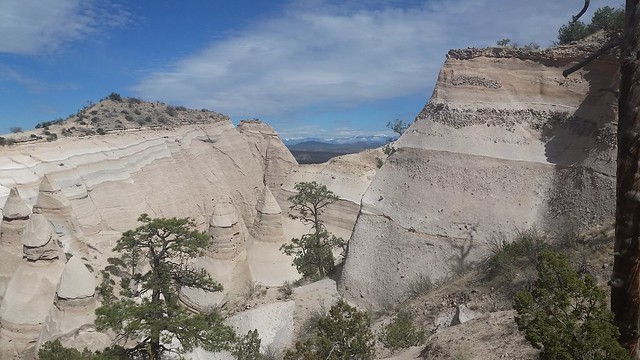 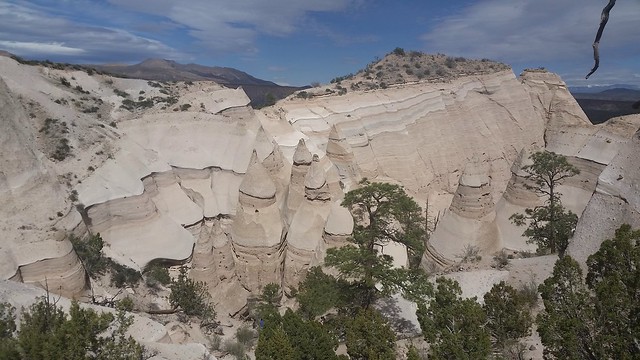 As we made our way around a switchback someone asked Pam, “Are you the nimble hiker?”  Turns out the couple we were passing were Pat and Sheldon, who we met on a hike in the Chiricahua Mountains in southeast Arizona last year.  They live in Buffalo, NY but spend time traveling much of the year.  What are the chances of meeting on trails in these two fairly remote areas? 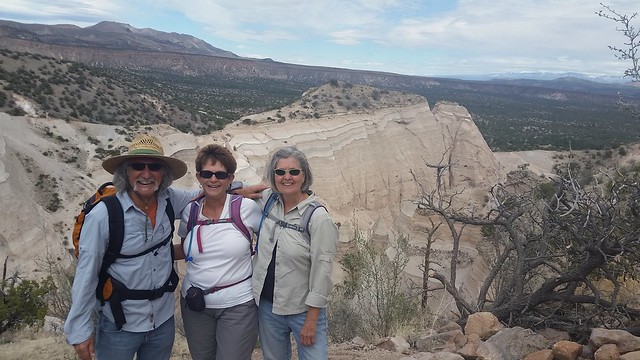 After chatting with Sheldon and Pat, we continued our climb to the top of the mesa, where we enjoyed the great views of the surrounding landscape. 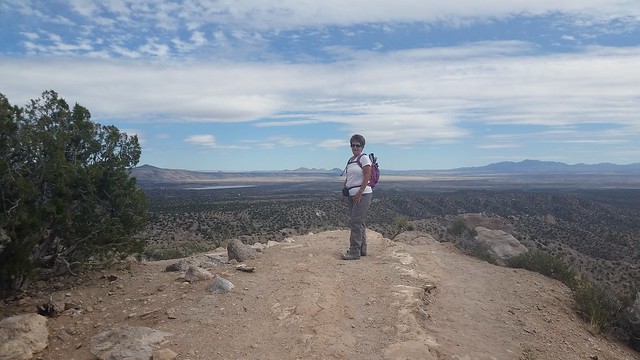 The hike back down from the mesa gave us different views of the colorful rock formations. 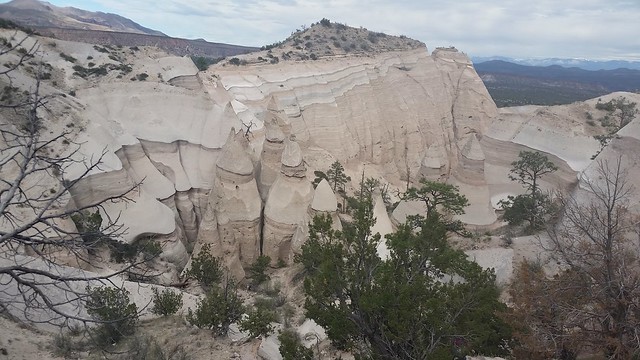 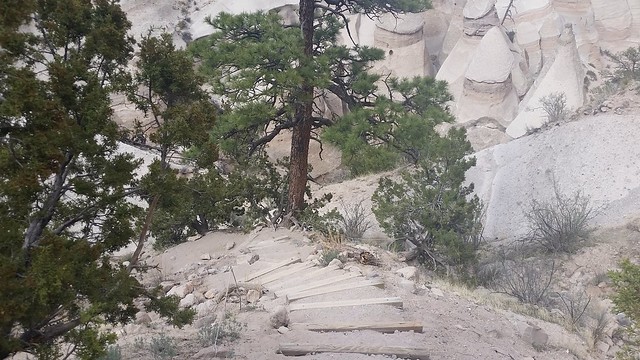 The steps seemed easier on the way down! 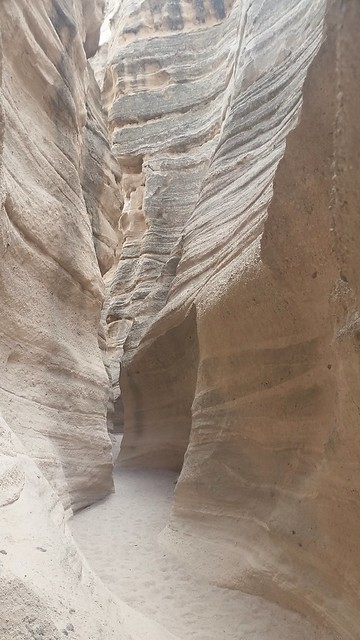 Back through the slot

Returning to the junction with the Cave Loop Trail, we turned right and continued around the loop, stopping at the large hole in the cliff.   Archaeologists call a small human formed cave a caveate (cave-ate). 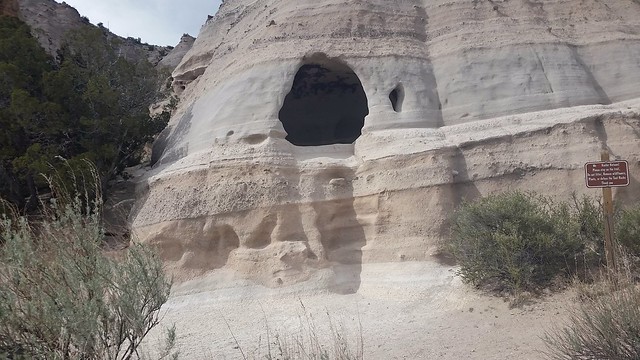 As we approached the trailhead we turned and could see the high spot in the mesa above were we had been at the end of the Canyon Trail. 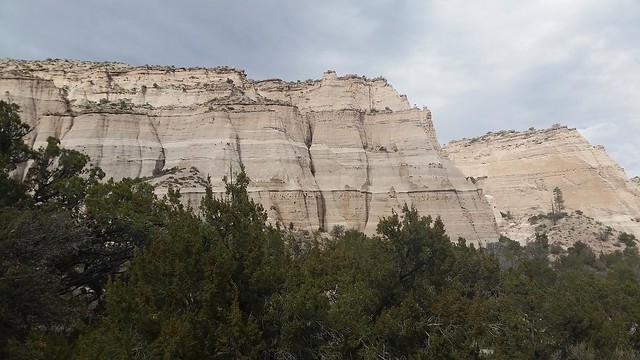 Approaching the parking area we passed through an area of tent rocks that looked like a village. 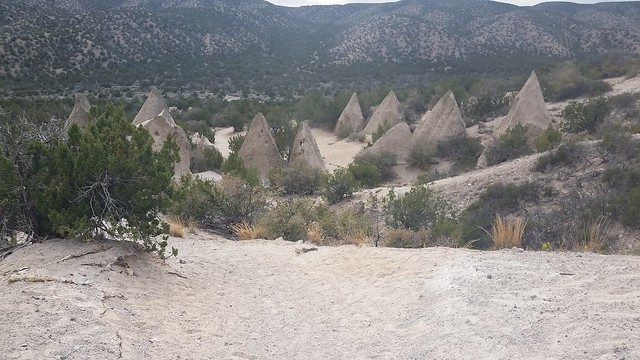 The main road into the park continues from the parking area for 3.5 miles to a scenic overlook.  We returned to the Jeep from our hike and headed that way. but it was late in the afternoon and the road was closed.

This hike through the monument was one of the prettiest we have done lately.  Don’t miss it if you are in the Albuquerque / Santa Fe area.  Bad weather is predicted for the next couple of days so we will not do much exploring.  But next up is a visit to Bandelier National Monument.  More on that later . . .