We left Tucson late last week and drove about 150 miles to the west side of Phoenix for a visit to White Tank Mountain Regional Park.  The drive from Tucson to White Tank is an easy one if you discount the 30 miles of terror as you go through the city of Phoenix! 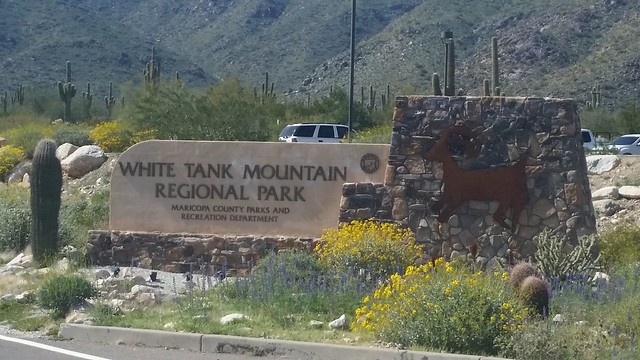 We survived the thrill ride of going through the city and arrived in the park unscathed then quickly set up in site 31.  Dave and Sue stayed in this site lasts year and warned us that we may have difficulty getting level.  Our first attempt had the rear tires on one side off the ground, never a good idea.  But we re-positioned the motorhome at an angle and put a couple of wood blocks under the back wheels and were able to get relatively level without further difficulty. 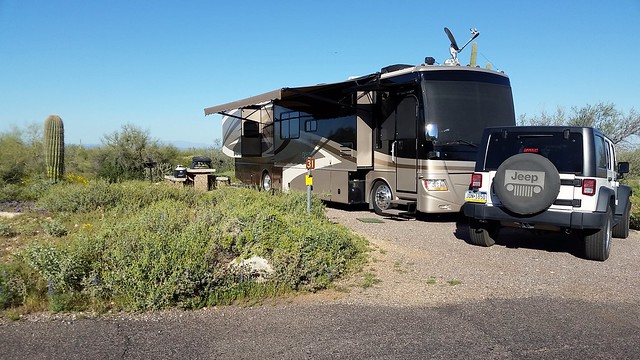 Parked at a site just up the road were fellow full-timers,  Jim and Gayle (Life’s Little Adventure).  We have followed their blog for a long time but were never able to meet up with them. 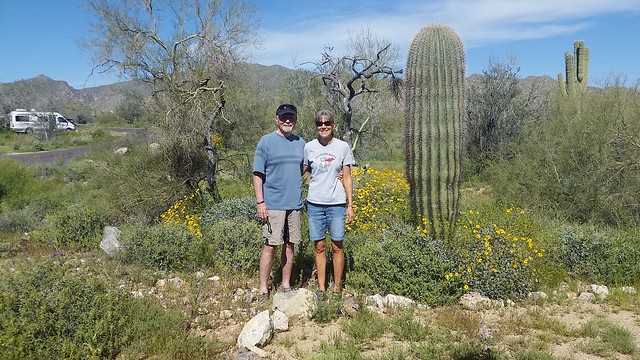 Jim and Gayle are avid hikers, and we were anxious to hit the trail with them.  But John had come down with a cold that was sapping his energy so a hike with temps in the high 80s seemed a little much.  But that didn’t deter the nimble hiker and early (a relative time with both couples) the next morning she set out with Jim and Gail to explore some of the many trails in the park. 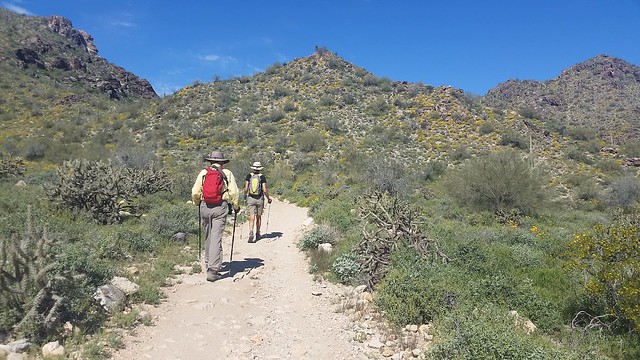 The Phoenix area has experienced quite a bit of rain recently so the desert is awash in green highlighted by many yellow flowers. 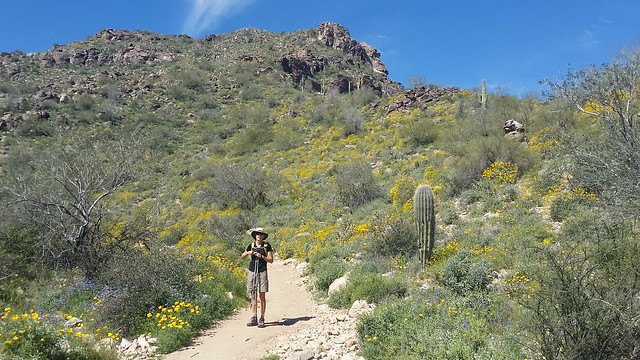 The trail began to gain in elevation and soon the Phoenix metropolitan area came into view. 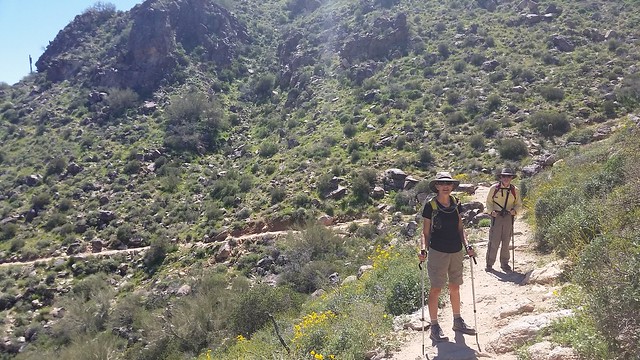 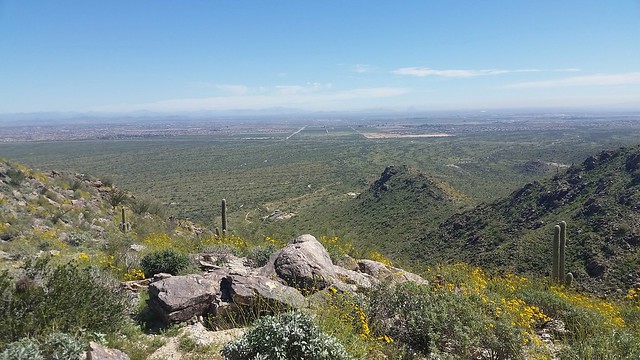 The trio ended up hiking about seven and a half miles, despite the high temperatures.  After the hike Jim and Gayle came over to our site for a pleasant happy hour.  The next day they headed south for Yuma, but we all agreed we would look forward to meeting up again real soon.

Just as Jim and Gayle headed out, Dave and Sue (Beluga’s Excellent Adventure) pulled into the site next to us with Pam’s furry buddy, Lewis.  While we will only be here for a couple of more days, they are staying for about ten days.

The next day was a bit warm for hiking and John had not yet fully recovered so Dave and Sue invited us along for a drive on a nearby Jeep road.  The Jeep road begins near the entrance to Lake Pleasant Regional Park so we first stopped there to check out the views of the lake and the new visitor center that was under construction during our visit to the park last year. 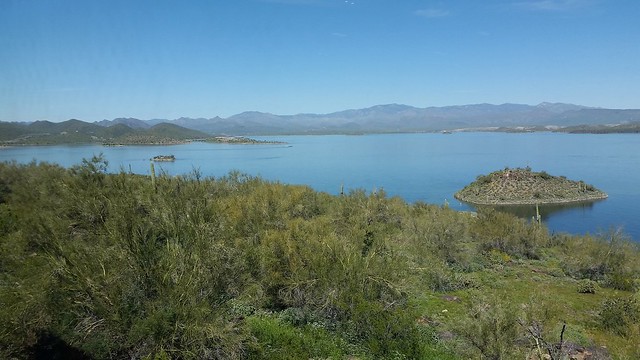 The small visitor center is very nice with great views of the lake.  The fellow pictured below lives just outside the entrance and greeted us as we arrived. 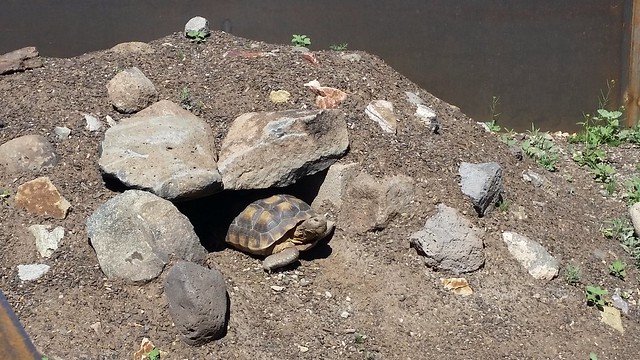 North Castle Hot Springs Road makes a long loop from Rte. 74 at the entrance to Lake Pleasant Regional Park then back to Rte. 74 28 miles to the west.  As it makes its way, the road crosses Castle Creek many, many times. 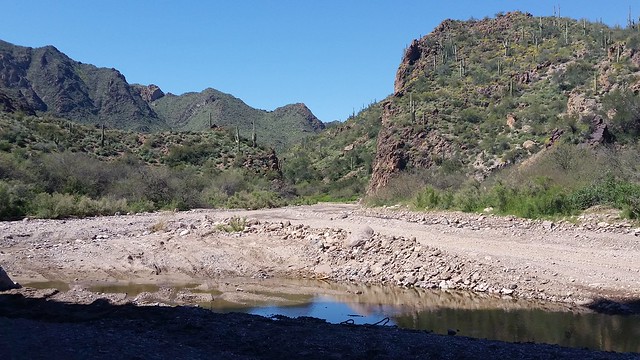 At one point we spotted a wild burro making his way up a dry portion of the creek bed.  The area is known for these little guys, descendants of pack burros abandoned by miners years ago. 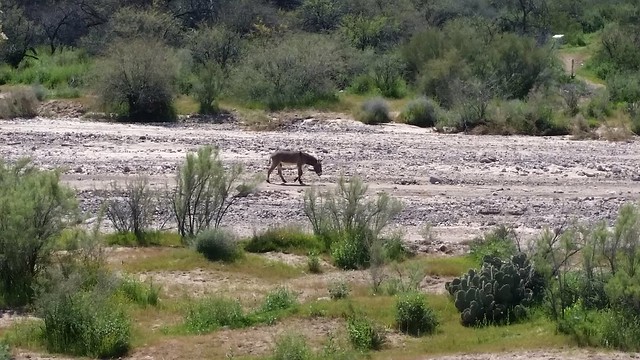 Less than half way along the route we passed Castle Hot Springs Resort.  It is very surprising to find this property located along a rough, rocky road that Arizona’s official historian calls “not really passable, and not even jackass-able” after heavy rainfall.

Castle Hot Springs once boasted a dazzling guest list — from Rockefellers to Carnegies to a Kennedy. Yet for 40 years, the resort sat empty, frequented only by a caretaker and countless owners whose grand plans for the site fizzled.  The resort was completed in 1896 and during its heyday in the 1920s the resort was visited by celebrities such as Zane Grey, as well as famous families such as the Rockefeller family.  The resort was also used by the United States military as a rehabilitation center from 1943 to 1944 to treat injured veterans of World War II.  John Kennedy spent three months at the resort during this period to recover from his wounds suffered during the sinking of his ship, PT-109.  The resort continued to be commercially operational until the main building was heavily damaged in a fire in 1976.  Since then the resort still features its swimming pool, tennis courts, administrative building and guest house along with the springs, which still produce 180,000 gallons of hot water a day. 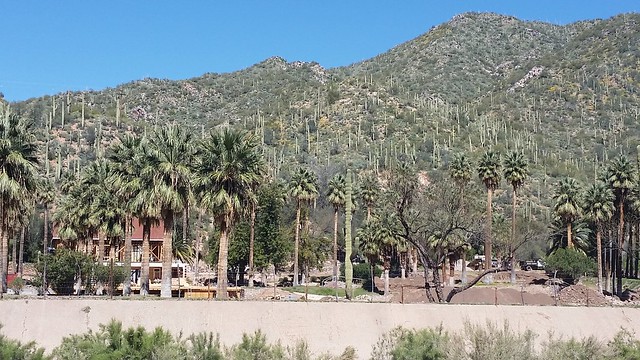 The property was sold in March 2014 for $1.95 million and the new owners are currently exploring options for redevelopment.  The place is a beehive of activity as construction workers rebuild many of the damaged facilities.  We will be watching the development of this place in the future as we’re curious to see if it can become a commercial success. 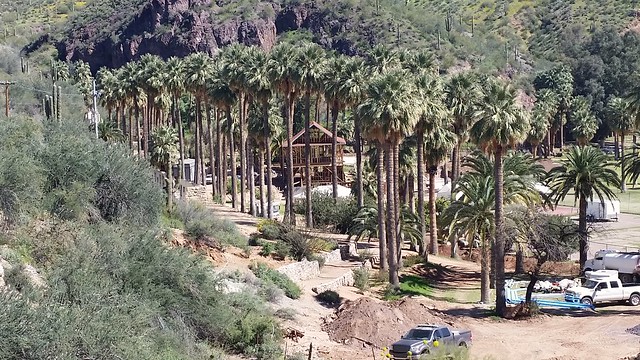 Other than that one burro we didn’t see much wildlife along the way, except for a small herd of horses grazing by the road. 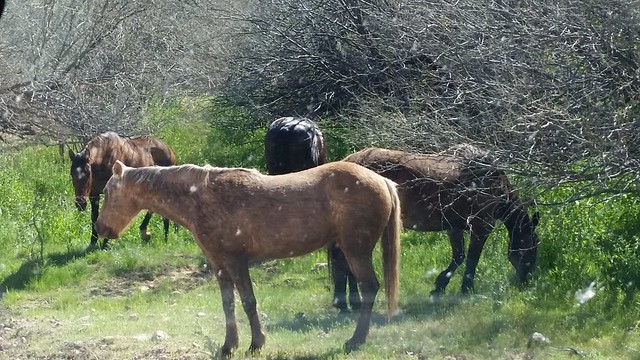 John finally recovered enough to do some hiking on our final day at White Tank so we took a short (three mile) hike through the colorful desert. 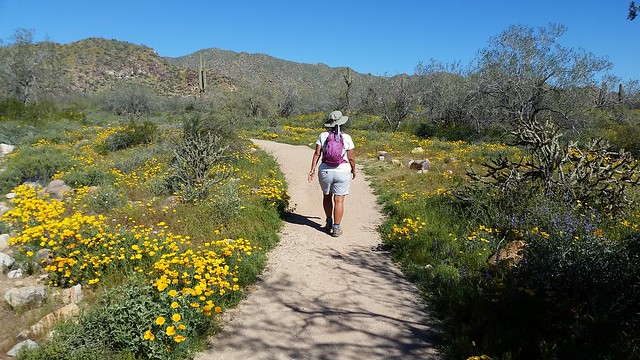 The desert in bloom 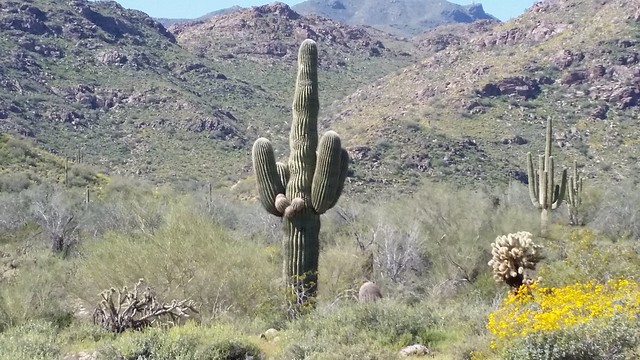 The park has a small visitor center located in a very new building next to the park entrance that also holds a branch of the local public library.  The visitor center has a number of different snakes that live in the area, including a Diamondback Rattlesnake who did some awesome poses for our camera. 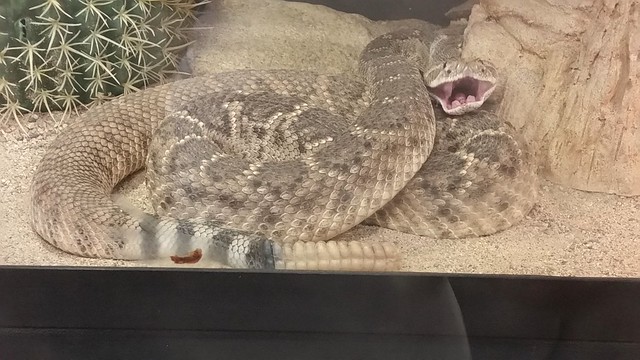 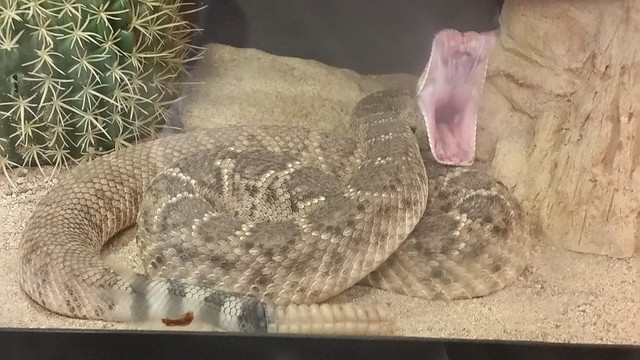 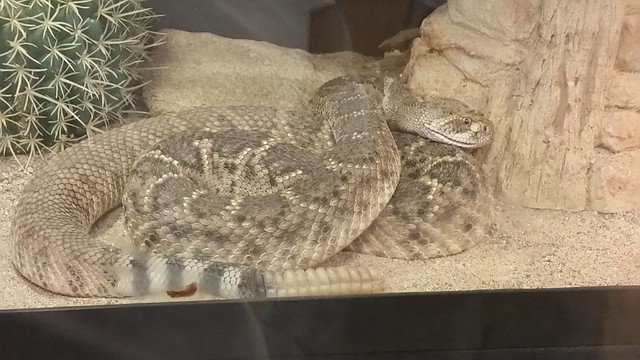 This morning we said our good-byes to Dave, Sue, and Lewis (he’s a dog) as we left southern Arizona and headed north to Flagstaff.  We’ll stay in Flagstaff for a couple of days to explore a couple of national monuments before heading east into New Mexico.