We left White Tank (near Phoenix) Wednesday morning and drove north about 150 miles to the city of Flagstaff.  The drive up I-17 is quite interesting, with an elevation change of almost 6,000 feet making for significant changes in scenery and temperatures. 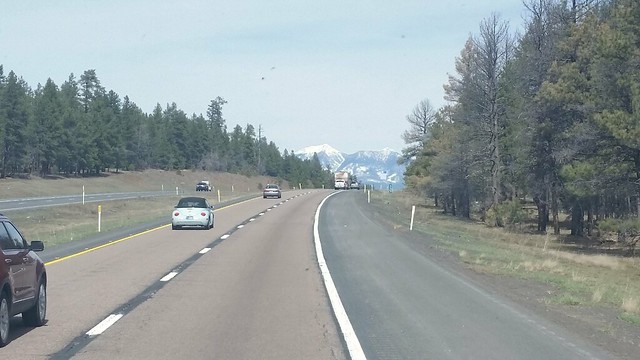 Approaching Flagstaff with the San Francisco Peaks in the distance

The selection of full hook-up RV parks is limited in Flagstaff, so we took a site in the Flagstaff KOA.  A typical KOA, this park is crowded and over-priced.  But it is perfect for a two night stay to allow us to visit two national monuments located in this area.  Our first visit was to Walnut Canyon National Monument, located just a few miles east of Flagstaff. 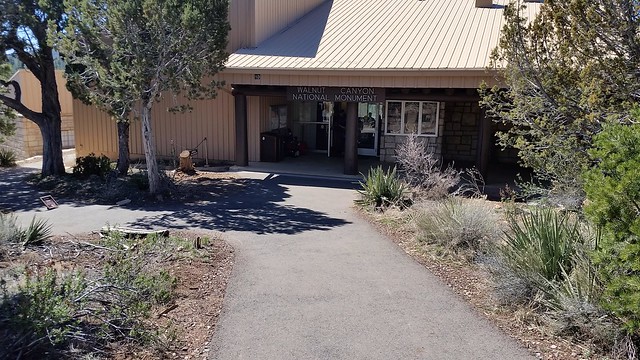 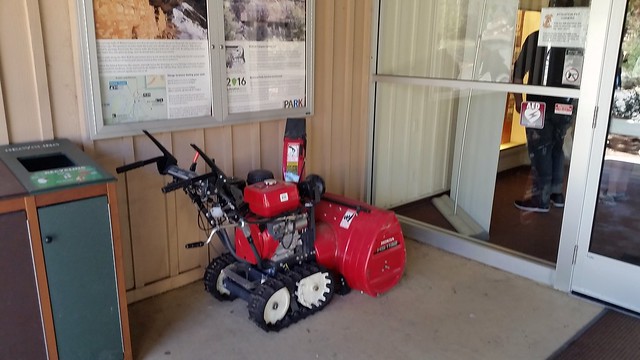 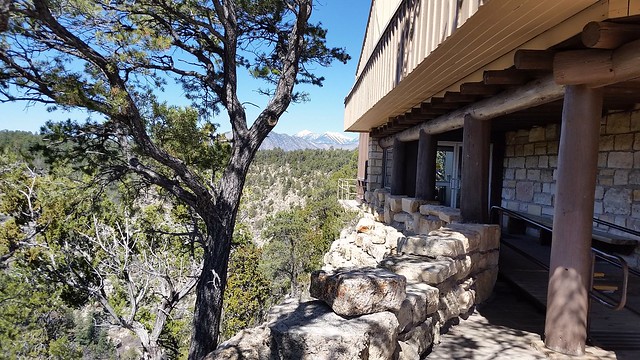 Great view of the San Francisco Peaks from the Visitor Center

The rim of Walnut Canyon is at an elevation of 6,690 ft. while the canyon’s floor is 350 ft. lower.  A 0.9 mi long loop trail descends 185 ft. into the canyon, passing 25 cliff dwelling rooms constructed by the Sinagua, a pre-Columbian cultural group that lived in Walnut Canyon from about 1100 to 1250 CE.  To get to the ruins you have to go down a paved path with about 350 steps.  We forgot to get a good picture of the steps so we did a Google images search and found a good one.  Looking closely at the guy going down the steps we quickly recognized him.  It’s our friend, Steve, from Lowe’s RV Adventure!  Thanks Steve and Mona Liza for the great photo!  Keep checking the mail for your royalty check.

Long years of erosion by a now a dry stream created a “island” where the main dwellings are located. 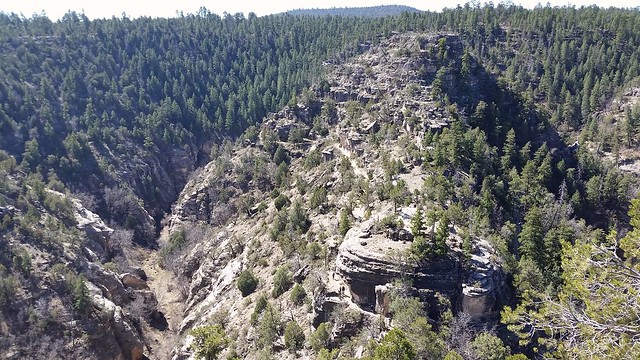 The canyon walls visible from the island contain many more remains of cliff dwellings. 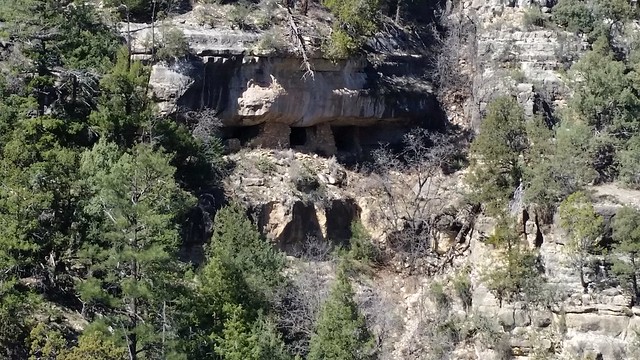 Once you reach the bottom of the steps the trail loops around the island, passing in front of the remains of many cliff dwellings. 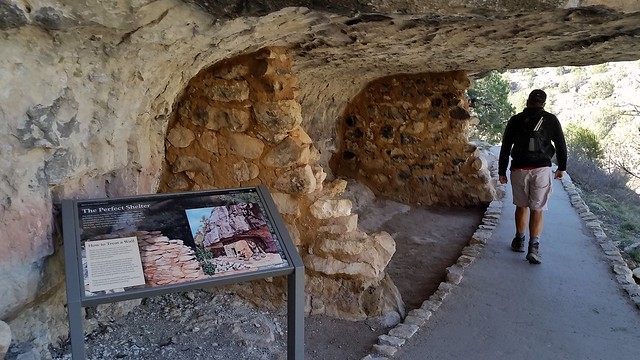 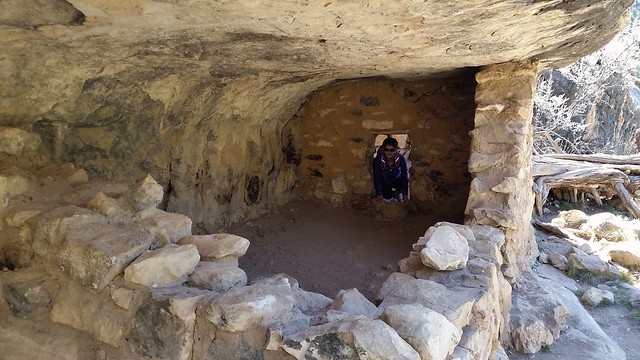 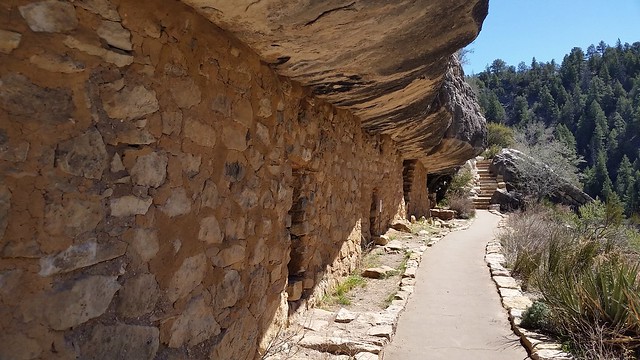 After making our way up the 350 steps (we couldn’t find a picture of Steve going back up), we returned to the Jeep and headed north of Flagstaff on US-89.  After about 35 miles we turned off the highway and drove east into Wupatki National Monument. 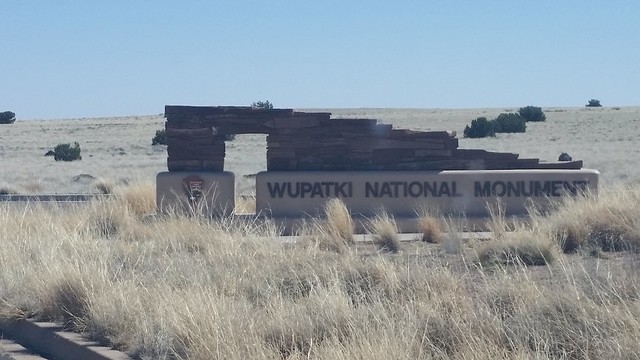 There are many settlement sites scattered throughout the monument built by the Ancient Pueblo People.  A major population influx into the area began soon after the eruption of nearby  Sunset Crater in the 11th century, which blanketed the area with volcanic ash.  The ash improved agricultural productivity and the soil’s ability to retain water.  Our first stop was to a group of remains called the Lomaki Pueblo. 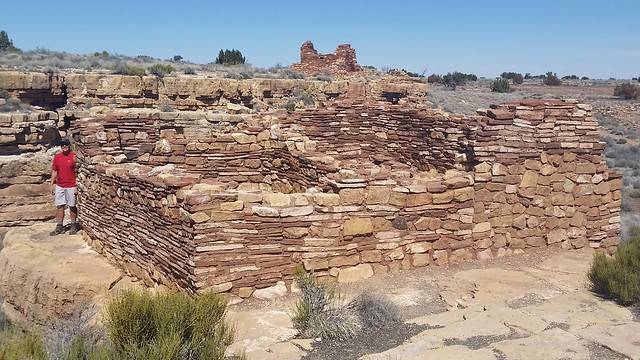 Just a few miles from the Lomaki Pueblo is the Citadel, a group of ruins constructed on top of a small but steep hill of volcanic rock. 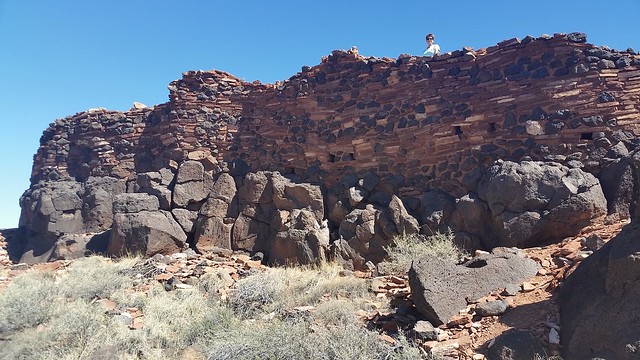 We then drove on to the Wupatki NM Visitor Center where the largest ruins are located.  The Wupatki Pueblo, the largest settlement on monument territory, is built around a natural rock outcropping. With over 100 rooms, this ruin is believed to be the area’s tallest and largest structure for its time period. 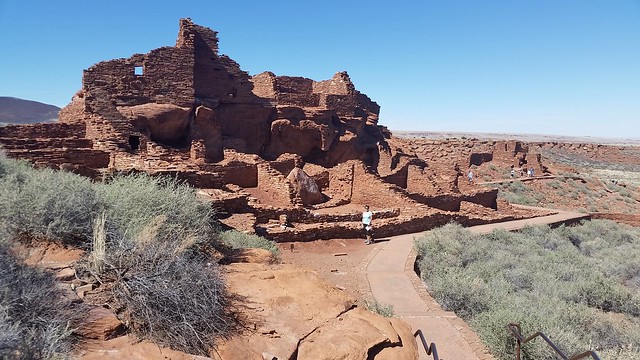 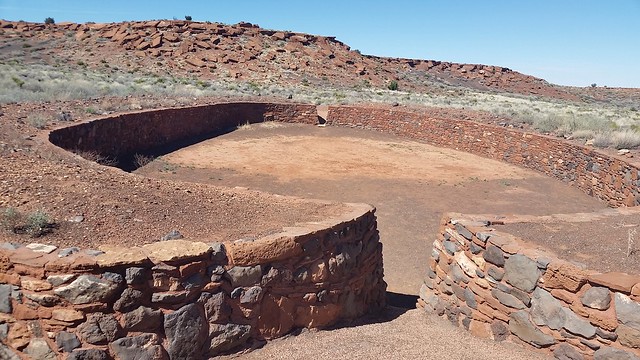 The site also contains a geological blowhole.  Caused by the difference in barometric pressure between the surface and small caves below, the hole can blow a stream of cool air out, or draw the air in.  We were amazed by the strength of cool air streaming out of the hole as we stood over it. 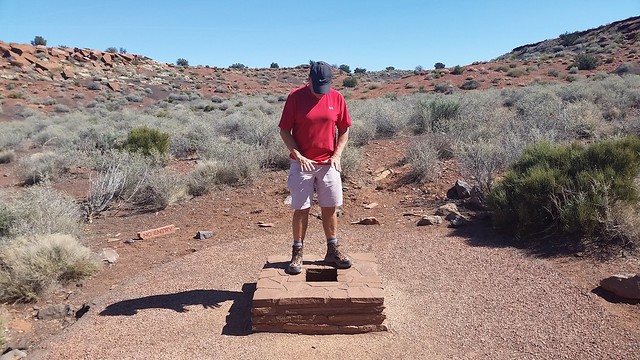 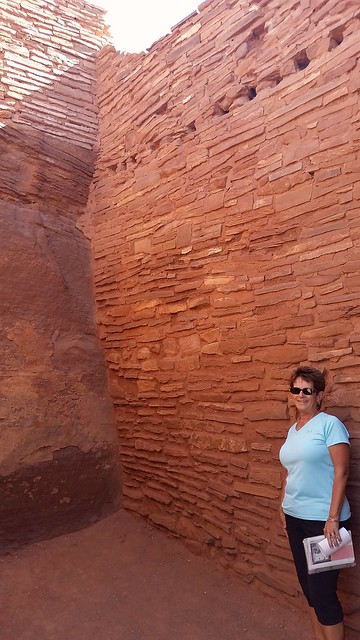 The only room you can enter

Leaving the visitor center we drove past the ruins of the Wukoki Pueblo, built on top of a large flat rock area. 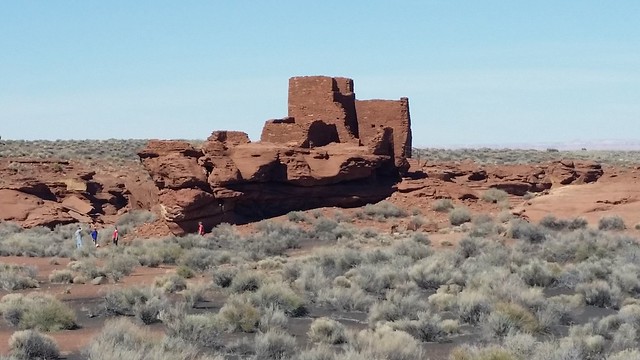 On our way back to Flagstaff the road went through the Sunset Crater Volcano National Monument.  The Sunset Crater eruption in 1085 producing a blanket of ash covering an area of more than 810 square miles and forced the temporary abandonment of settlements of the local Sinagua people.  The volcano has partially re-vegetated, with pines and wildflowers. 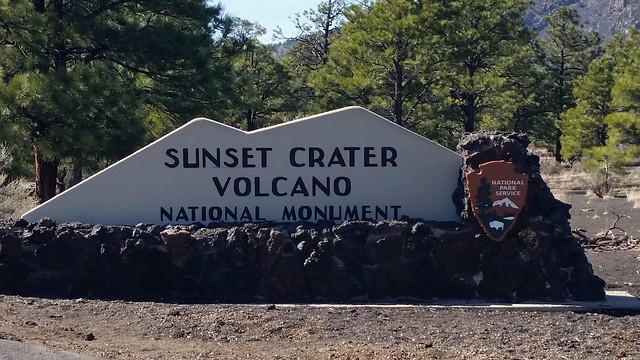 In 1928, a Hollywood film company planned to detonate large quantities of explosives on the side of Sunset Crater in order to create an avalanche for Zane Grey’s motion picture, Avalanche.  Public outcry over this plan led in part to the proclamation of Sunset Crater Volcano National Monument by President Herbert Hoover in 1930 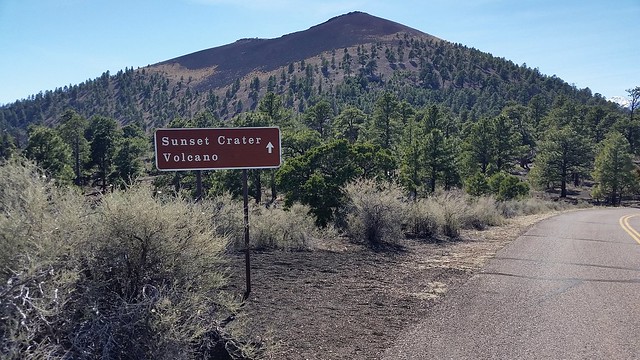 Returning to Flagstaff we were treated to a beautiful view of the snow covered San Francisco Peaks.  The highest peak, Humphrey’s Peak, is 12,655 ft., the highest point in Arizona. 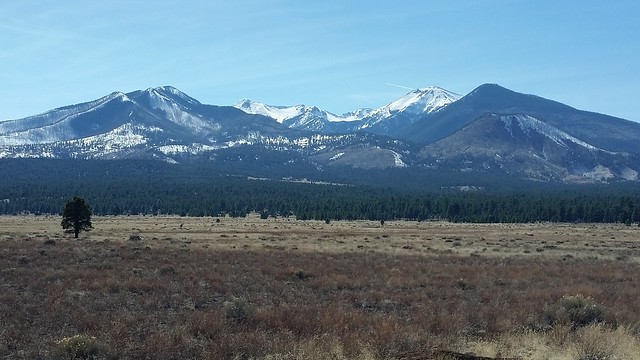 Tomorrow we leave Flagstaff and drive about 60 miles to the east for a visit to Winslow, AZ.  More on that later . . .