It has been a week and a half since we left Naco and moved to Lazydays KOA in Tucson.  Since we’ll be here for a month we reserved one of their “deluxe” sites, with a larger patio, hedges around the site, and a small area of grass. 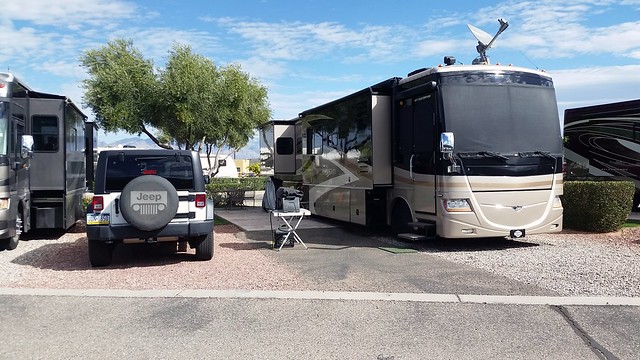 The afternoon of our second day here we hosted a happy hour with some RV friends who are also staying in this park.  Dave and Sue from Beluga’s Excellent Adventures and Bill and Jodee from On the Road Abode joined us. 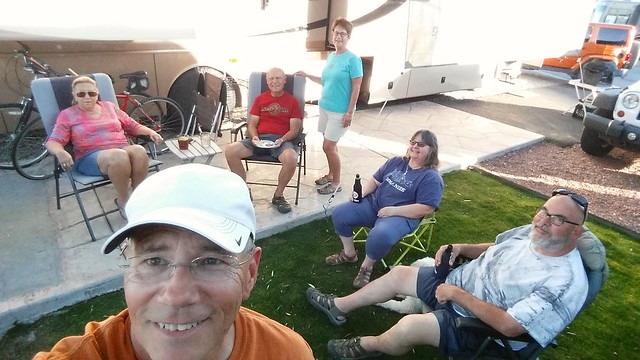 There are many citrus tree in this park so one of Pam’s first activities was to fire up the juicer and make some delicious orange juice and grapefruit juice. 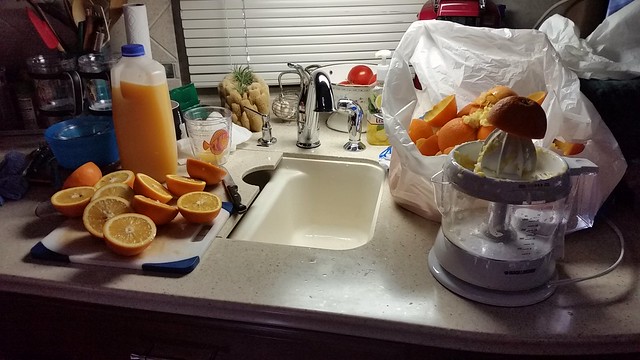 It wasn’t very long after our arrival that the nimble hiker had us out on the trail.  Our first couple of outings were in the Robles Pass section of Tucson Mountain Park. 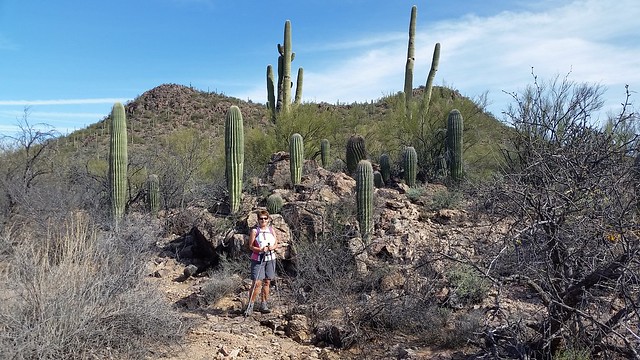 “Beauty” among the Saguaro 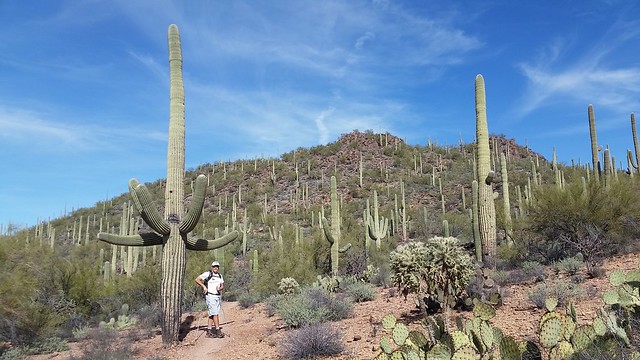 “Beast” among the Saguaro 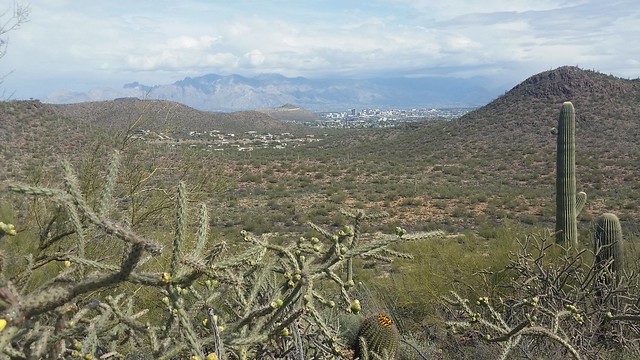 Downtown Tucson in the distance 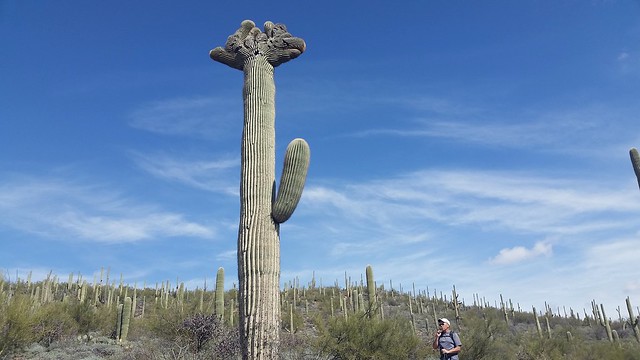 Tucson has some great bike paths and the area is very flat so one day we headed out for a 20 mile bike ride.  Along the way we passed through the campus of the University of Arizona so we stopped by Old Main to check out another old friend. 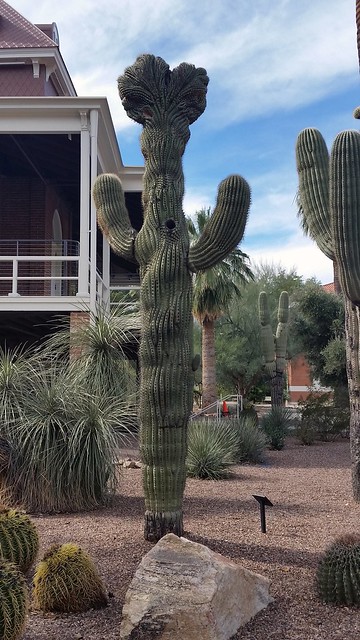 Pam has been following the blog Jim and Barb’s Adventure for a long time and when we learned they were in the area, we arranged a late lunch at the Barrio Brewing Co.  We enjoyed a tasty adult beverage, some good food, and some great conversation.  A hike together just may be in our future. 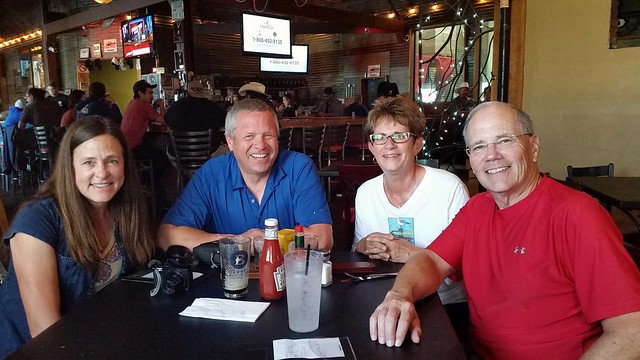 A few days later we drove north of Tucson to the Dove Mountain Brewing Co. (seems to be a pattern here) to meet with another couple we have met during our travels.  Rick and Joanne (Rick and Joanne’s RV Travels) have a home outside Denver but travel for much of the year.  We first met them when they were camphosting in Glacier NP a couple of years ago. 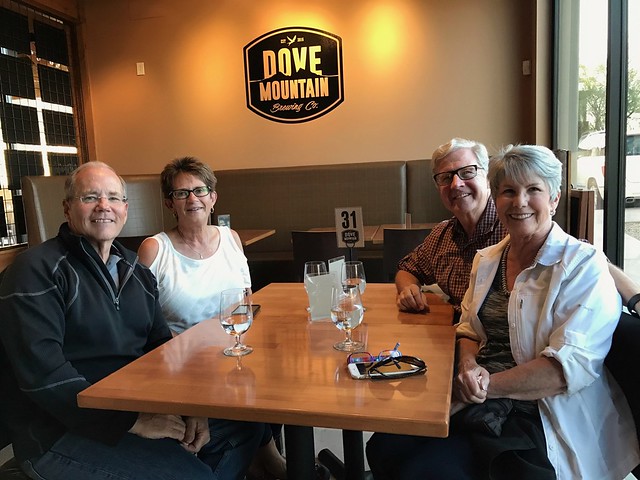 The nimble hiker found a newspaper article from a couple of years ago that described a hike near Gate’s Pass, just west of Tucson in Tucson Mountain Park.  The writer of the article called one part of the hike the Unnamed Trail as she couldn’t find any name for it on maps.  The hike begins at the parking area on the south side of Gate’s Pass, which is the location of the northern terminus for the popular Yetman Trail, a long trail that runs the length of the Tucson Mountain Park. 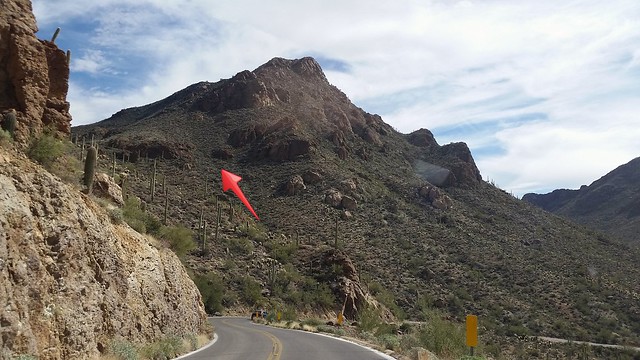 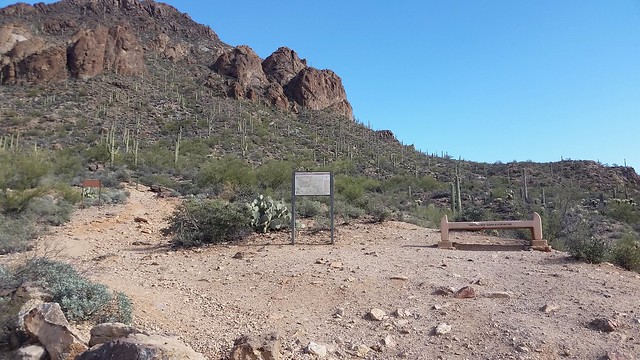 Trailhead for the Yetman Trail 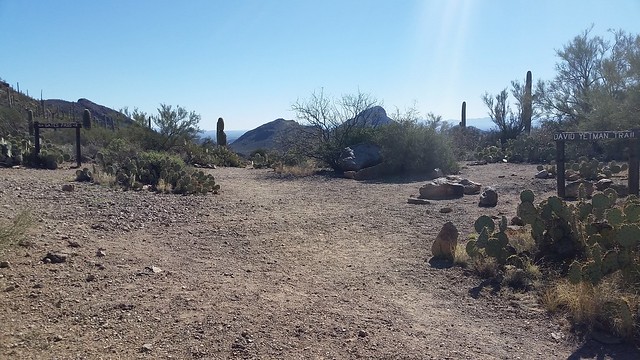 Gate’s Pass Trail sign on the left, Yetman Trail on the right 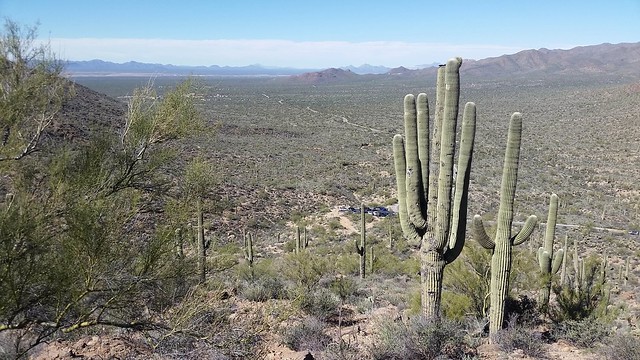 Looking west on the Gate’s Pass Trail, the parking area is visible in the lower center

After a fairly challenging climb along the Gate’s Pass Trail we went through a saddle between the peaks.  Just after the saddle we found the Unnamed Trail on our right and headed south. 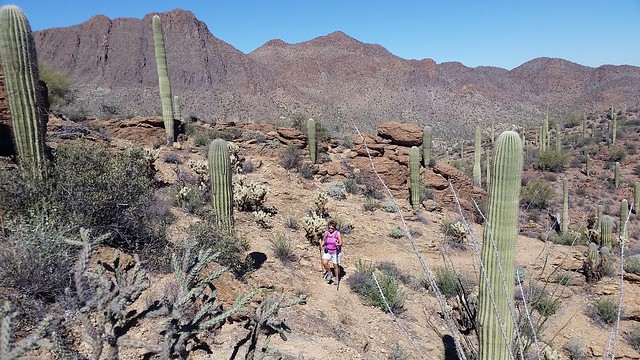 Hiking south on the Unnamed Trail 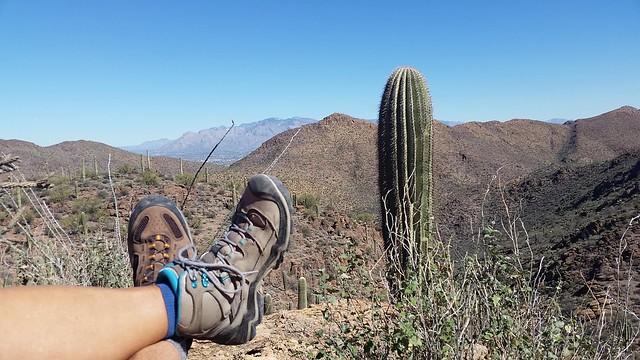 The writer of the article about this hike described an end point in the trail overlooking a ravine with a nice view looking both to the east and the west.  We could see the trail continuing into and through the ravine and over another saddle to the west.  We knew the Yetman Trail was in that direction so we continued on the trail, confident we would intersect with it.  We could then head back north to the parking area, making a nice loop hike. 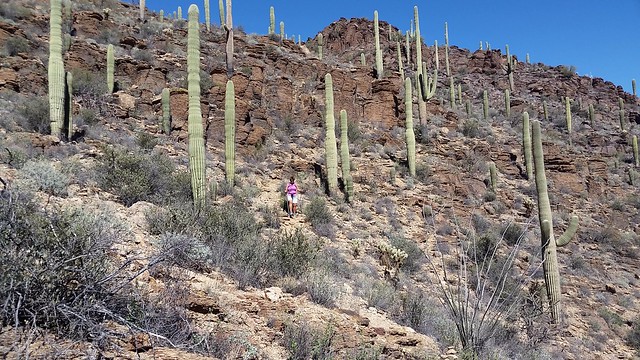 Although a bit steep and narrow in spots, the trail wasn’t too difficult and, after a bit, we came to the Yetman Trail. 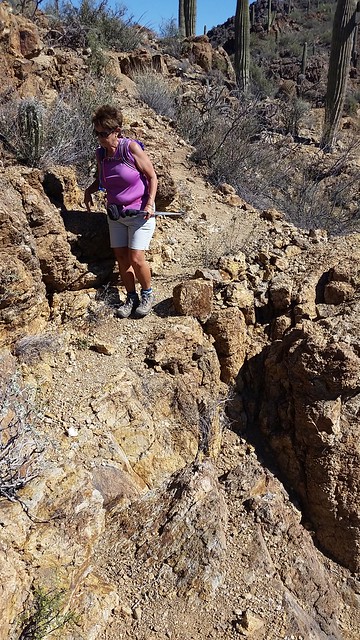 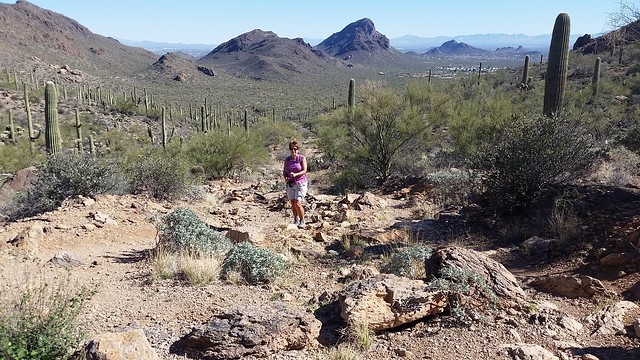 Heading back north on the Yetman Trail to the parking area

Although only about four miles long, this hike seemed much longer due to the steep, rough, loose stone terrain.  But we will definitely be recommending it to some of our hiking pals who are in the Tucson area.

The weather for the weekend predicts wind, rain, and cool temperatures forcing us to curtail our outdoor adventures.  But the forecast for next week is much improved so we’ll be out and about soon.  More on that later . . .

18 Responses to Busy Days in Tucson