A Little Golf, a Little Exploring in Naco, AZ

Posted on February 8, 2017 by placestheygo

We are now finishing our ten day stay here along the border with Mexico.  We came here to meet Sue and Dave (Beluga’s Excellent Adventures), to play some golf on the Turquoise Valley Golf Course next to the RV park, and to enjoy some of the nice restaurants in the nearby town of Bisbee. 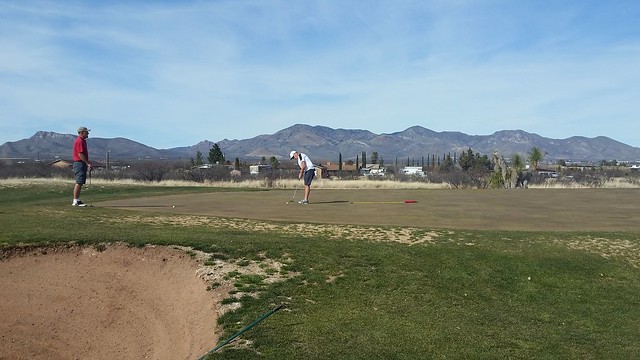 Mountains in view in all directions 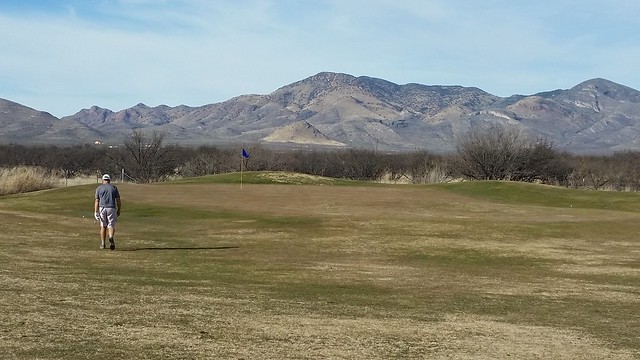 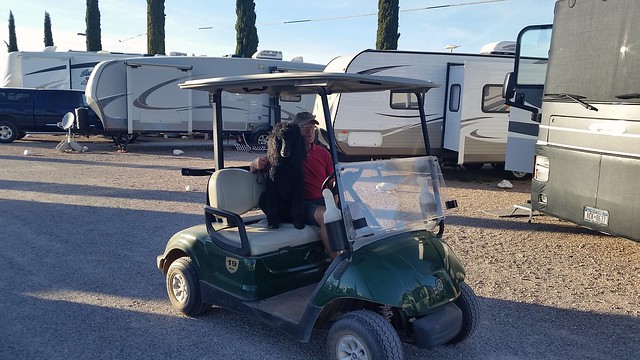 Some golfers here are a bit strange looking

One of our favorite places to eat in Bisbee is Cafe Roka, located on Tombstone Canyon Road in the downtown area.  Dave and Sue joined us for another delicious meal at this quirky restaurant. 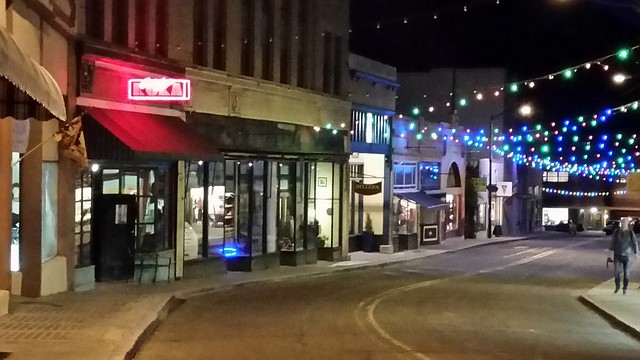 Cafe Roka on the left side of Tombstone Canyon Rd.

One day we needed a break from golfing so we drove about 30 miles to the west for a visit to a religious shrine built on the side of a hill visible from AZ-92.  We have driven by this shrine many times and wanted to check out the view of the valley from the site. 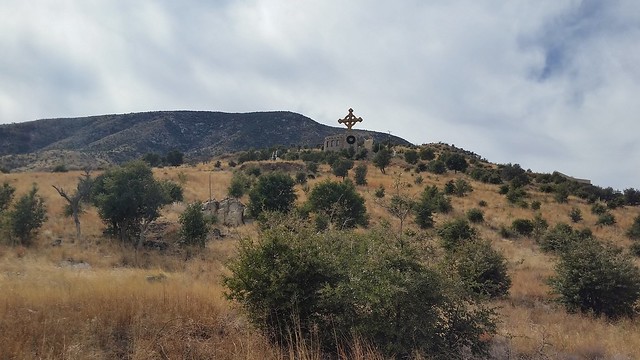 Our Lady of the Sierras was built in the late 1990s by a couple from Illinois who had purchased the land to build a home for their upcoming retirement.  They were inspired to construct a shrine after visiting one that had a similar hillside location in the former country of Yugoslavia. 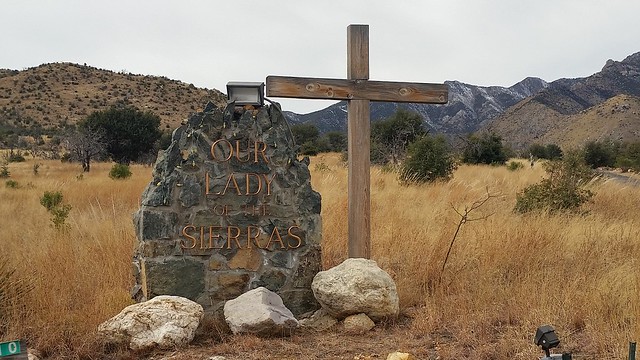 The main feature of the shrine is a 75′ Celtic cross.  Sitting next to it is a 31′ statue of the Virgin Mary.  A small chapel sits in front of the statues. 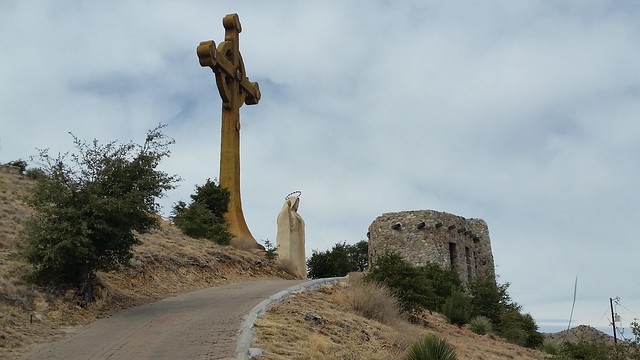 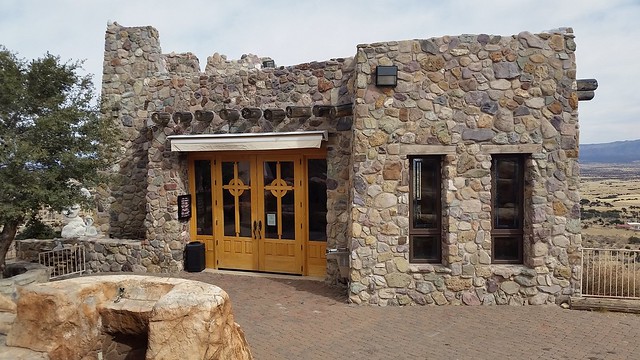 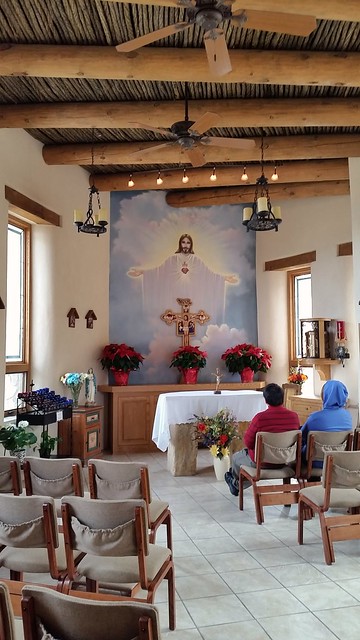 A waterfall is to the left of the cross with a stairway leading further up the hillside leading to a small grotto and the 14th Station of the Cross. 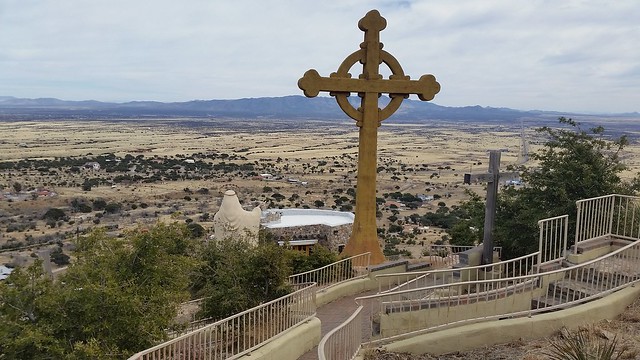 On our last day in Naco we were joined by Bill and Jodie (On the Road Abode) who were staying in nearby Tombstone with friends.  They met us (along with Sue and Dave) at the Bisbee Breakfast Club in nearby Lowell, a little area just south of Bisbee. 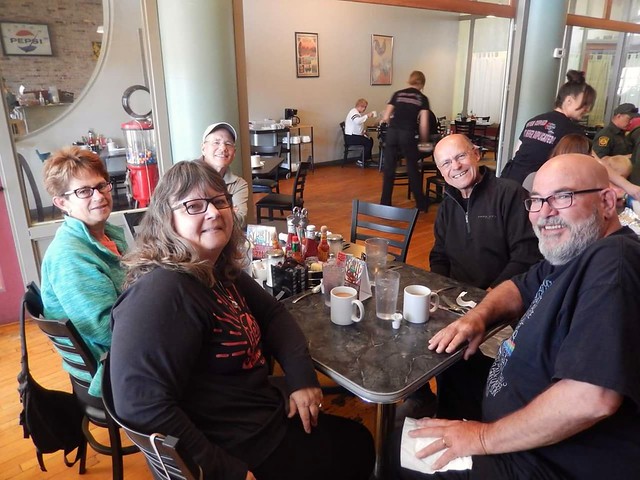 After a delicious breakfast the group drove back to Naco for a visit to the border fence.  We had visited with Bill and Jodie last summer in Clayton, NY.  During that visit we had a group photo taken of the four of us standing along the St. Lawrence River, which forms the border between the U.S. and Canada.  Jodie had the great idea that we should take a similar photo of the group along the Mexican border.  While the people in the photos are the same the setting is sure very different.  Instead of the beautiful St. Lawrence in the background we have . . . . 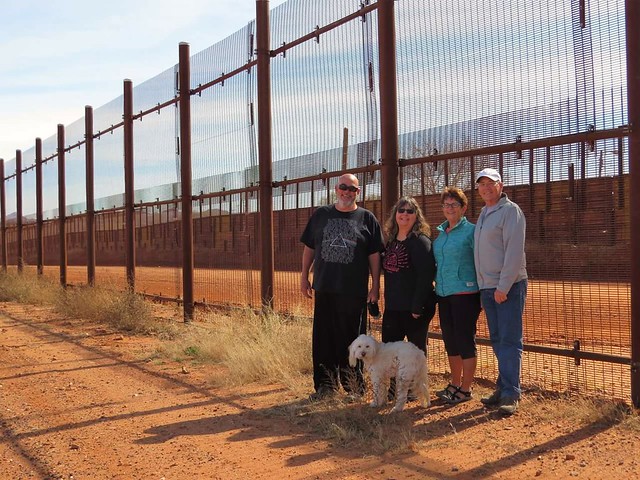 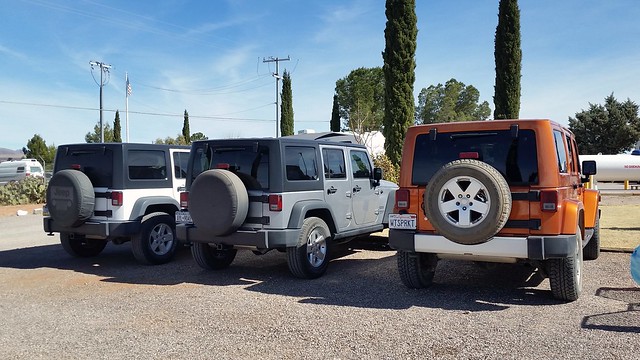 A popular vehicle for those living in motorhomes

After breakfast and the photo, Bill and Jodie headed back to Tombstone, and we headed back out for one more round of golf.  The six of us will meet again today, as we are all headed for Lazydays KOA in Tucson.

33 Responses to A Little Golf, a Little Exploring in Naco, AZ