After two pleasant days in New Orleans we left Bayou Segnette State Park and continued our journey west.  With all the reports we read about the terrible road condition of I-10 from New Orleans to Lafayette we decided to take US 90 to Lafayette.  It turned out to be a good decision as US 90 is a smooth four lane road that only goes through a few small towns. 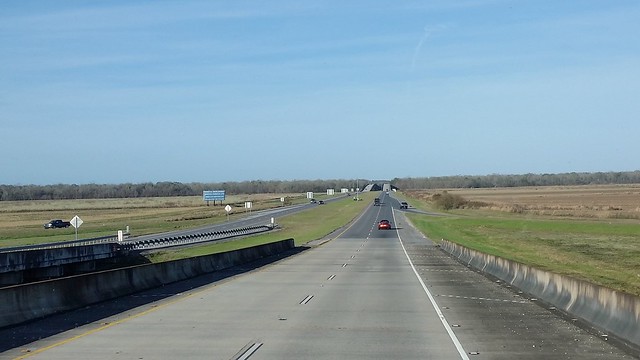 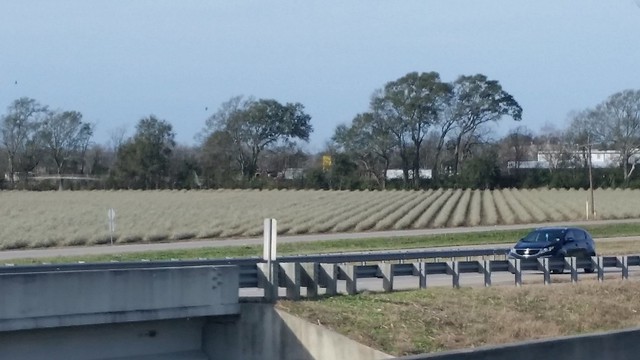 Rice fields along US 90

US 90 became a bit bumpy for the lasts ten miles or so as we approached Lafayette, but all in all it was a pleasant ride.  US 90 intersects with the interstate in Lafayette.  We turned west on I-10 and found the highway going into Texas to be in great shape. 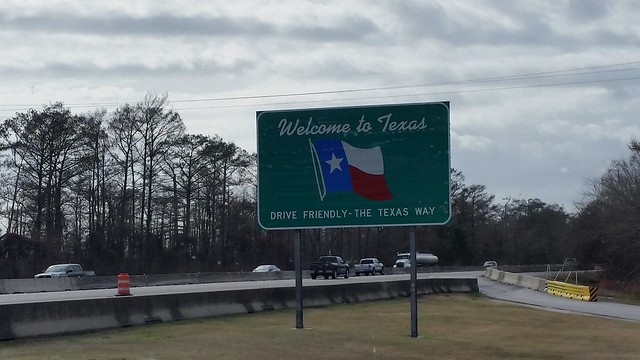 Where else would you see a mile marker with a number this high but Texas? 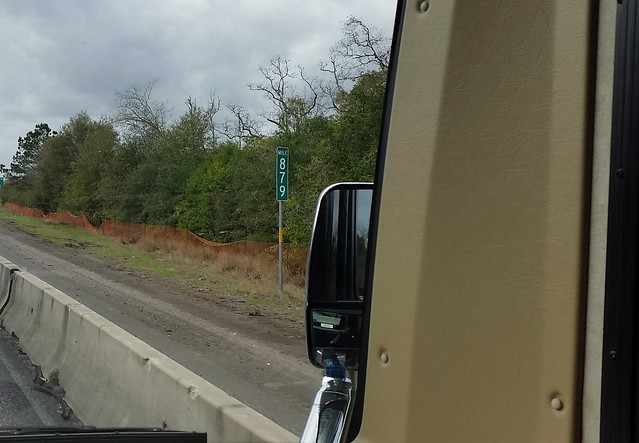 Our next stop was south of Houston in Stafford, TX where we would stay overnight in the Elks Lodge.  We headed there to have a brief visit with friends, Paul and Marsha Weaver (Where’s Weaver), who have been staying in the Elks for the past couple of months.  Marsha advised us to get through Houston by 3:00 PM to avoid heavy traffic so we left Bayou Signette very early in the morning.  Unfortunately, about 20 miles into Texas traffic in both directions came to a complete stop due to a terrible accident (with two deaths).  After two and a half hours to move three miles we finally cleared the area of the accident and resumed normal speed.  But the delay caused us to go through the center of Houston at the worst possible time! 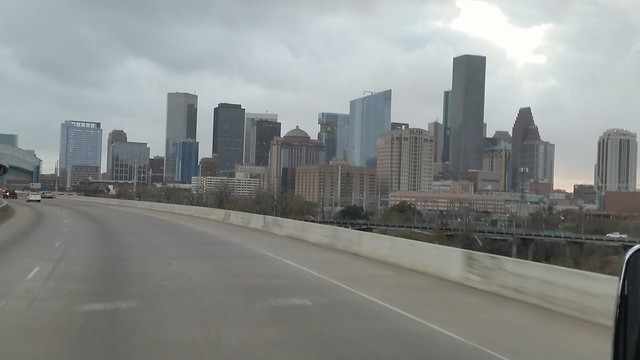 Driving through an unfamiliar city in a large vehicle during rush hour after dark is not our idea of a good time!  We could just imagine what all those commuters in a rush to get home were saying about a 40 foot motorhome in their path! 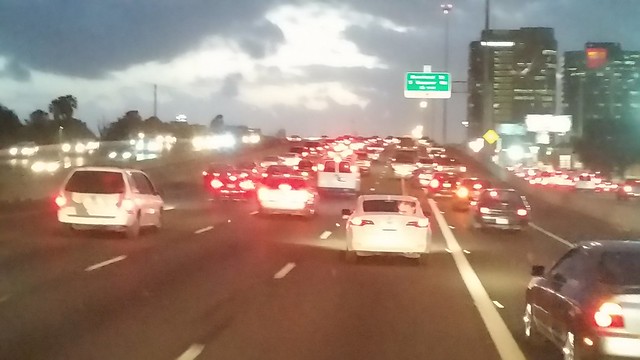 Yikes, what are we doing here?

But we arrived at the Elks safely and were greeted by the Weavers, who showed us the great site they had reserved for our use.  Once we were set up we walked over to their RV and enjoyed a wonderful meal that Marsha had prepared.   After a wonderful home cooked meal and some great conversation, we returned to our motorhome tired from our long (11 hours and 376 miles) day’s journey. 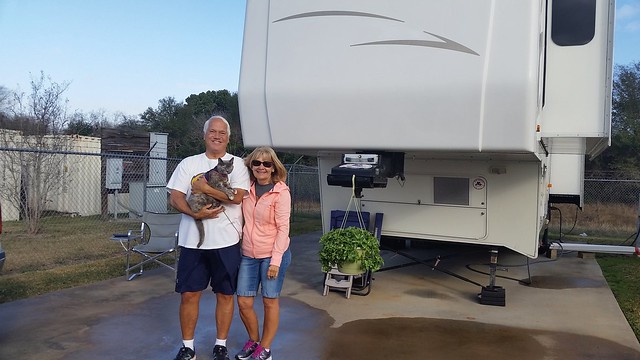 The next morning they drove us to a nearby chain coffee house so we could pick up a treat for our next journey.  Then after saying our good-byes we headed on down the road.  Paul and Marsha will be traveling west next week, and we plan to meet up again in Arizona.

Leaving Stafford we headed west on Us-90 through the town of Sugarland.  US-90 runs parallel to I-10 so we took it thinking it would be a nice alternative to traveling interstate.  But after about 20 miles we were glad to drive a few miles north and return to I-10.  A strong crosswind and heavy construction trucks speeding by us in the opposite direction made the ride on US-90 a bit uncomfortable.  But I-10 is in great shape so we continued west with only the crosswinds making things a bit of a challenge for the driver.  We took a beltway (TX-1604) around San Antonio and re-joined the interstate continuing on to the little town of Junction, where we had a reservation at Junction North Llano River RV, a nice little park just south of the highway. 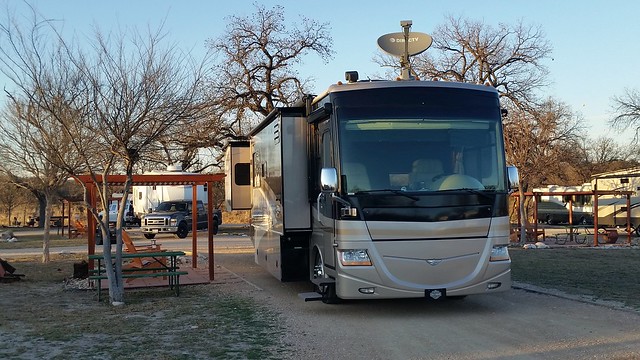 The next morning we left Junction and continued west on I-10. 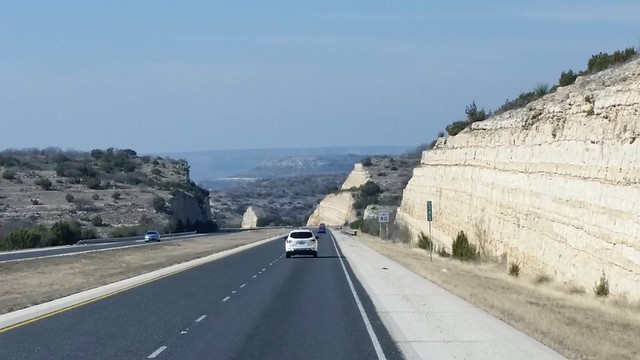 West of Junction the scenery began to get interesting

After about 200 miles (our shortest drive in this trek across Texas), we stopped for the night at Fort Stockton RV Park, about five miles east of Fort Stockton. 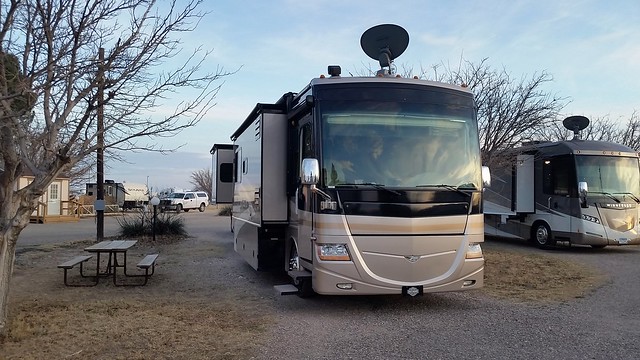 After setting up we unhooked the Jeep and headed into Fort Stockton to buy a few groceries.  While passing through town we spotted something interesting, a giant roadrunner statue.  The bird even has a name: Paisano Pete.  Built in 1979, Paisano Pete was for many years the World’s Largest Roadrunner.  At 22 feet long and 11 feet tall, he’s still pretty big. 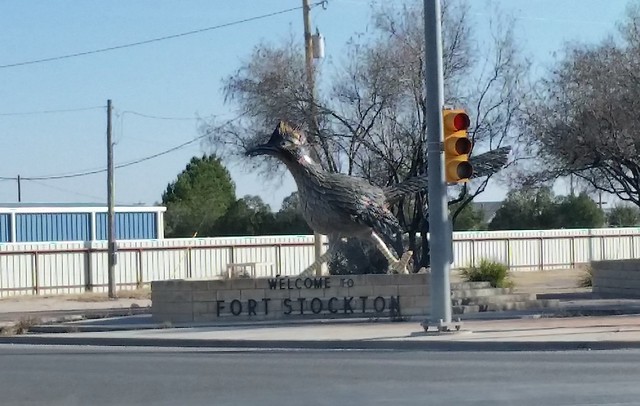 The next morning we planned to complete our trek across Texas and drive to Carlsbad, NM.  We intended to take the most direct route, US-285, for a drive of about 150 miles.  But a Facebook post from our friend, MonaLiza (Lowes RV Adventure), warned us that we might want to reconsider.  She and Steve had taken this route a couple of years ago and said it is the worst road they had ever driven in their motorhome (and they have driven to Alaska!).  The road passes right through an oilfield and the pavement has been severely damaged by heavy truck traffic.  The truck traffic is still very heavy with the large vehicles traveling in both directions at high rates of speed.  We’ve experience this type of thing in North Dakota (in a car) and didn’t want to do it again.  So we took another look at the map and decided to take a much longer (about 240 miles) but safer route.  For the first leg of the journey we continued west on I-10 for 125 miles to the town of Van Horn.   In Van Horn we turned north on TX-54 for 55 miles. 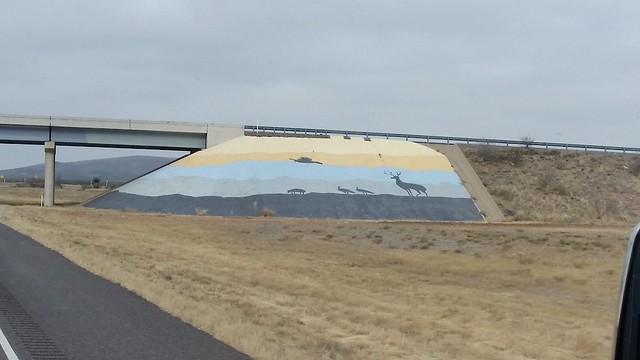 TX-54 turned out to be a very nice route with almost no traffic.  It also had the nicest scenery we have seen in our trek through Texas. 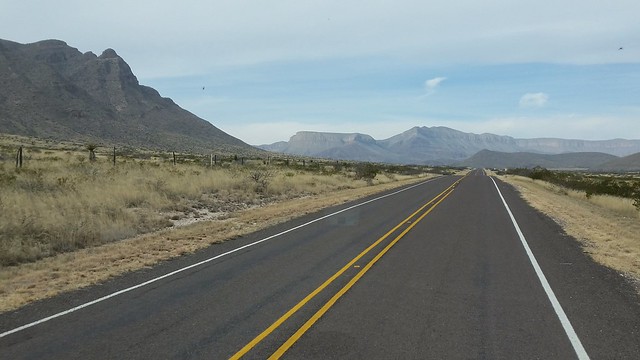 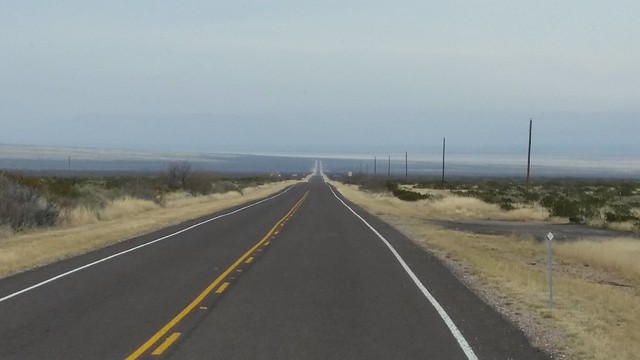 The north end of TX-54 terminates at US-62 where we turned north for the final 50 mile leg of our trip to Carlsbad, NM.  The highway soon went up a fairly steep grade as we entered the southern edge of the Guadeloupe Mountains before leveling out the rest of the way to Carlsbad. 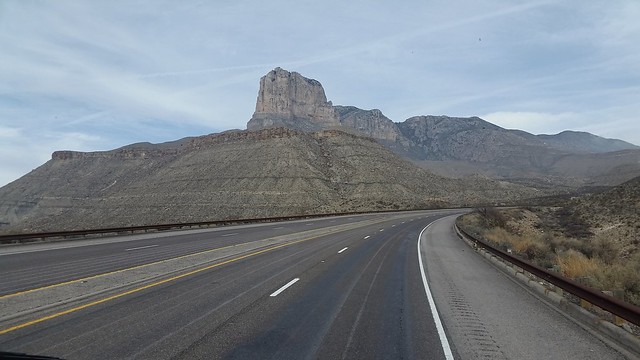 Going up the edge of the mountains 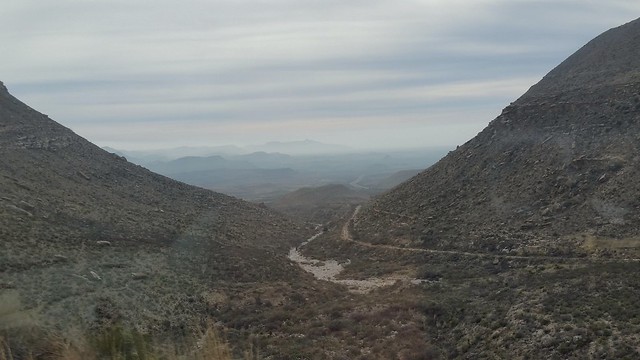 The road we just traveled is way out in the distance

Rain is in the forecast for the next couple of days so we are settled in at the Carlsbad RV Park.  But the rain will not bother us much since we are here to visit Carlsbad Caverns National Park.  It shouldn’t be raining inside of the caves. 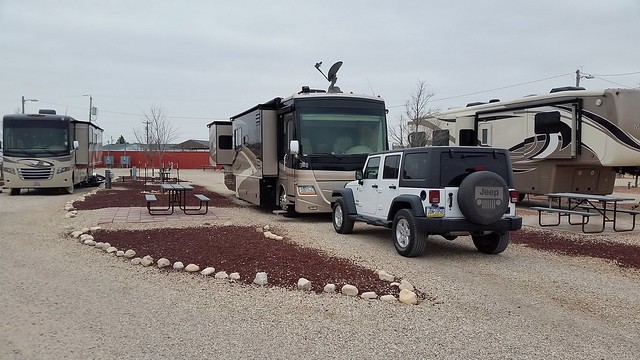 More on our visit to Carlsbad in our next post . . .