Posted on January 9, 2017 by placestheygo

After an all day rain in Foley, AL on Thursday and freezing temperatures during the night, we awoke on Friday to clear skies and sunshine.  We planned for an early departure but it took a while for us to prepare to leave as John had to get the ice off the slides and slide toppers. Ice! What’s up with that? 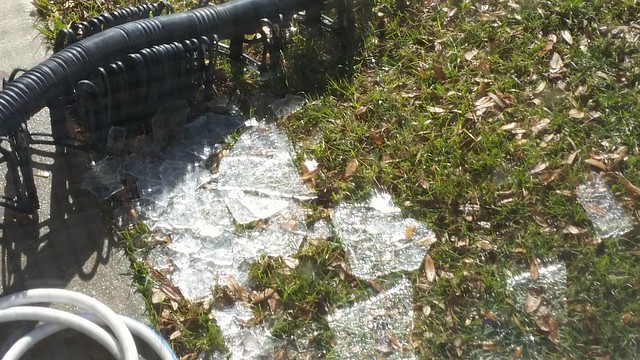 Once on the road we drove north about ten miles to I-10 and headed west.  After a few miles on the interstate we came to the Jubilee Parkway, a 7.5 mile bridge across Mobile Bay.  Traffic was light but a strong cross-wind made for an interesting ride. 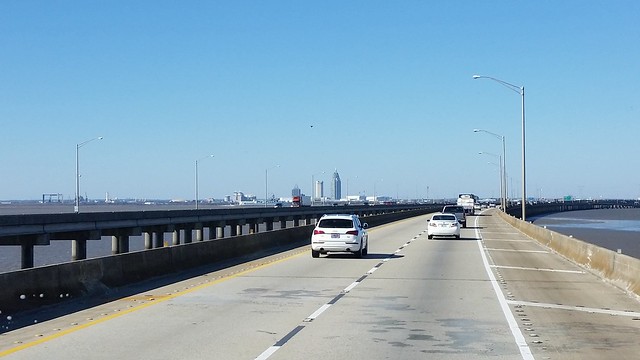 Jubilee Parkway with the city of Mobile in the distance

At the west end of the bridge we quickly crossed Blakely Island and entered the George Wallace Tunnel going under the Mobile River. 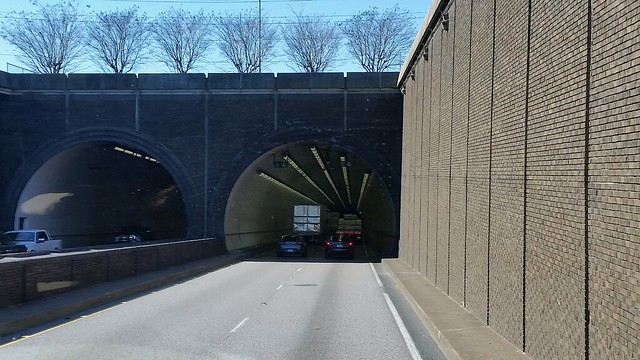 At least there is no wind in the tunnel

Once clear of the Mobile area we continued on I-10, crossing into Mississippi 25 miles later. 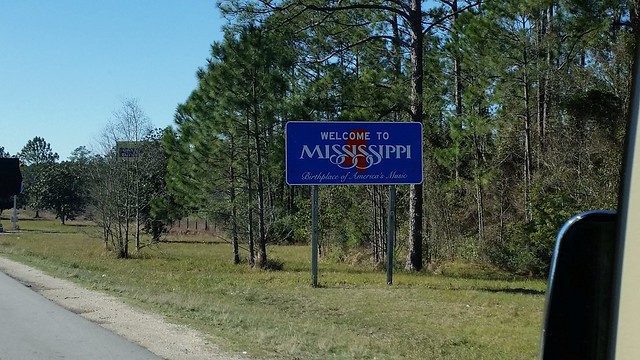 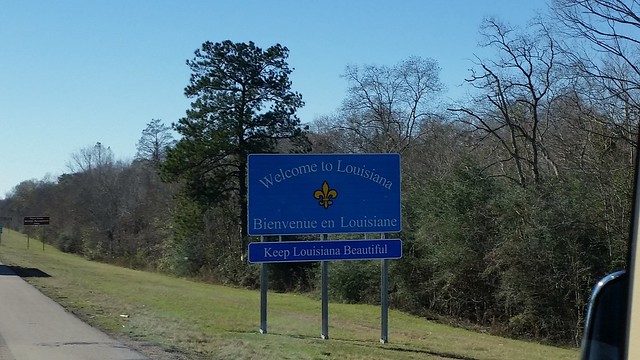 About 15 miles into Louisiana we came to the I-10 Twin Span Bridge, a nearly 6 mile causeway officially known as the Frank Davis “Naturally N’Awlins” Memorial Bridge, which crosses the eastern end of Lake Pontchartrain. 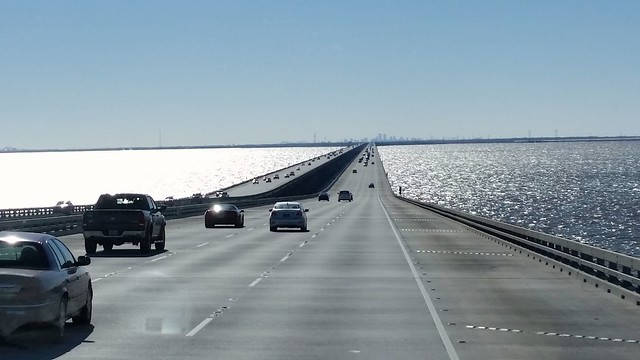 The “Naturally N’Awlins” Bridge with New Orleans in the distance

We left I-10 as it passed the Superdome in New Orleans and took US-90 across the Mississippi River.  We continued on US-90 headed for our home during our stay here, Bayou Signette State Park. 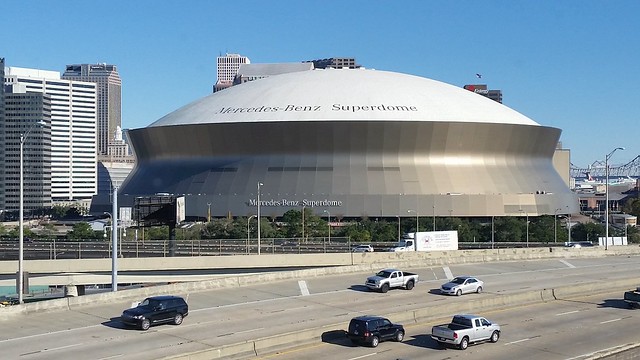 We only scheduled two days for our visit to New Orleans with one day planned for a tour of the French Quarter and another for a visit to the National WWII Museum.  Since it was going to be cold and windy on our first day (Sunday), we decided to visit the museum (it’s indoors!). 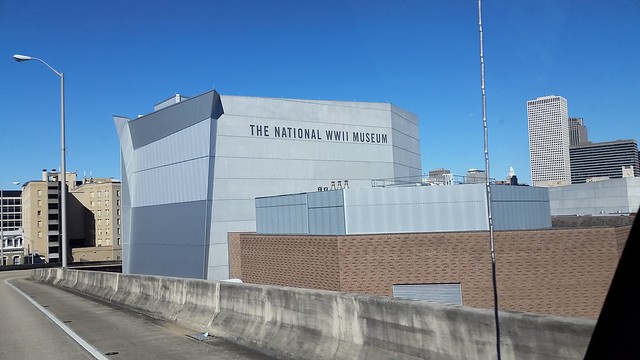 Upon entering the museum and paying your admission fee you are given a swipe card called a dog tag. 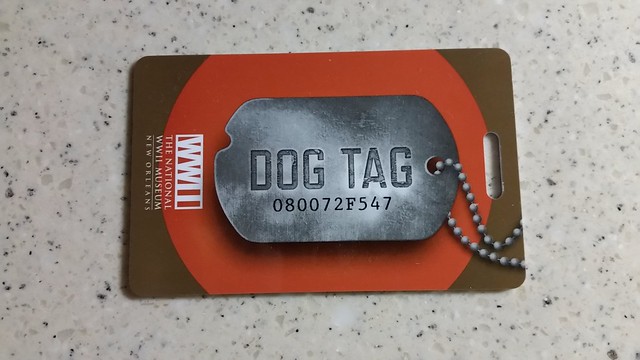 As you proceed through the museum you can swipe the card at five stations along the way and follow the continuing story of one person who served during the war. 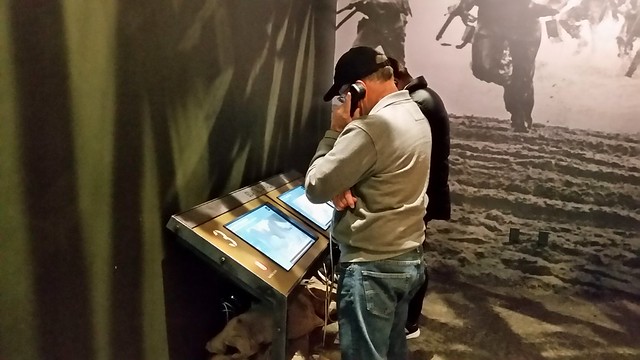 Pam’s “dog tag” identified a man named E. B. Sledge who served with the Marines in the Pacific Theater. 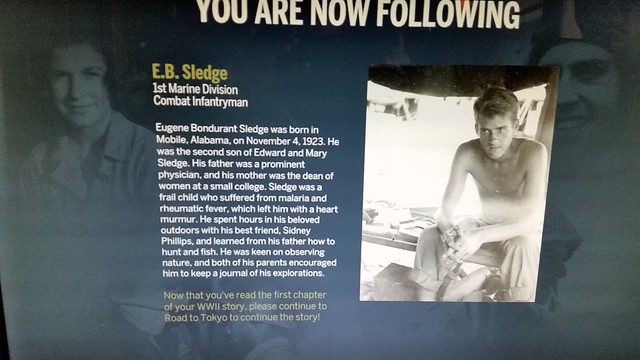 Near the admissions counter you enter a train car that simulates leaving a station in a city in 1942, just like so many young men of that era experienced as they headed off to war. 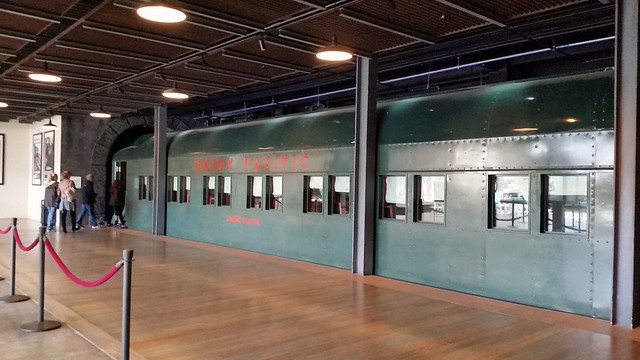 In the same large room as the admissions counter and train car is a re-creation of a Higgins Boat, a landing craft used extensively in beach assaults, most famously in the Normandy assaults on D-Day. 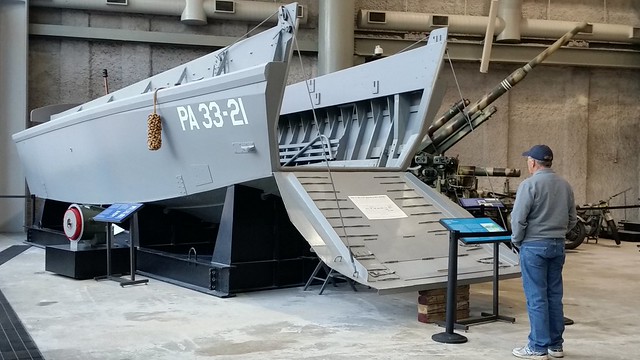 The Higgins Boat is one of the reasons this museum is located in New Orleans.  Higgins Industries is located here and built about 20,000 boats during the war.   Next to the Higgins is a German 88 mm anti-aircraft and anti-tank artillery gun.  It was widely used by Germany throughout the war, and was one of the most recognized German weapons. 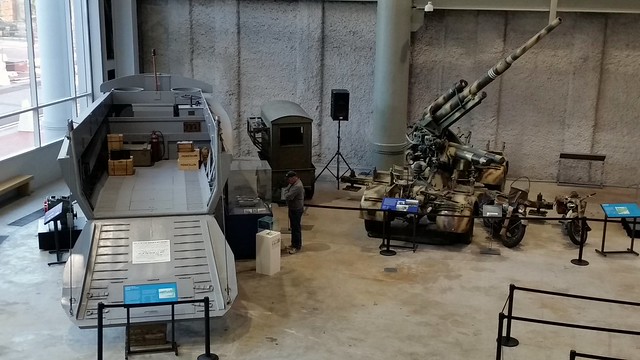 Hanging above the Higgins Boat and the 88 is a Douglas C-47 Skytrain, a transport aircraft used to take paratroopers behind the lines in Normandy just before the D-Day landings. 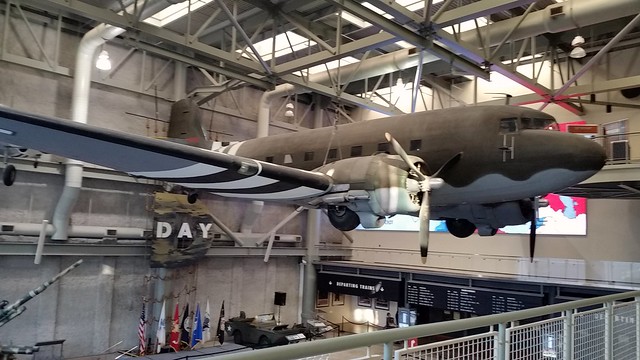 We then entered the Solomon Victory Theater to watch a video, Beyond all Boundaries, narrated by Tom Hanks.  The video, about 30 minutes long, uses various modalities (the seats shake during explosions) as it reviews key events of the war.  The video is excellent and provides a great overview of the war, very helpful to someone who doesn’t know much about it (i.e. Pam).

Following the video we entered a two story building housing the “Campaigns of Courage: European and Pacific Theaters” exhibitions.  We remained on the first floor and made our way through The Road to Berlin exhibition trail. 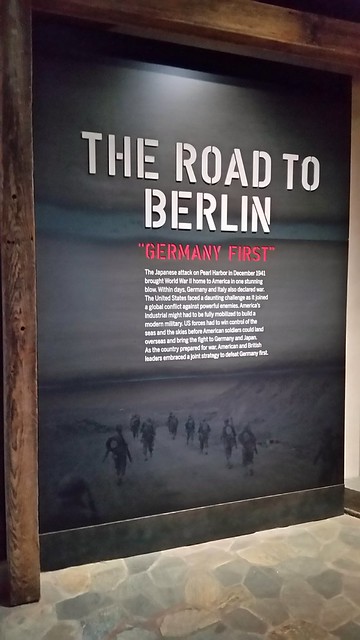 Using a combination of life-like displays and brief videos, the exhibition takes you from the invasion of North Africa (Operation Torch) through the fall of Berlin. 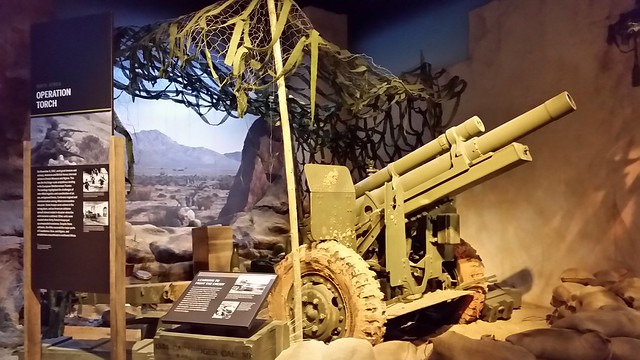 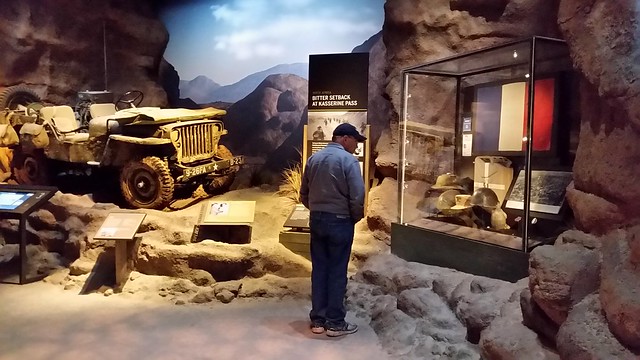 American defeat at the Battle of Kasserine Pass in North Africa 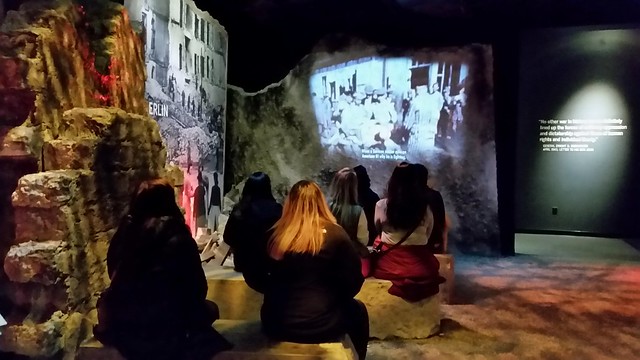 Short video about the fall of Berlin

One year John had a student named Andy Pergrin in one of his history classes.  During a discussion of the Almedy Massacre during the Battle of the Bulge, Andy raised his hand and said that his grandfather was in that battle and was near the massacre (German troops executed a group of American prisoners and left the bodies frozen in the snow).  Since he didn’t know much about his grandfather’s participation, the discussion just moved on.  That night John did some research on the grandfather and discovered that Lt. Col. David Pergrin found the only survivors of the killing just a short time after the massacre.  He later commanded an engineer battalion in the construction of a bridge across the Rhine River.  John was watching for mention of the bridge as we moved through the exhibition and, sure enough, he came to a plaque with a picture of Lt. Col. Pergrin and an explanation of his feats! 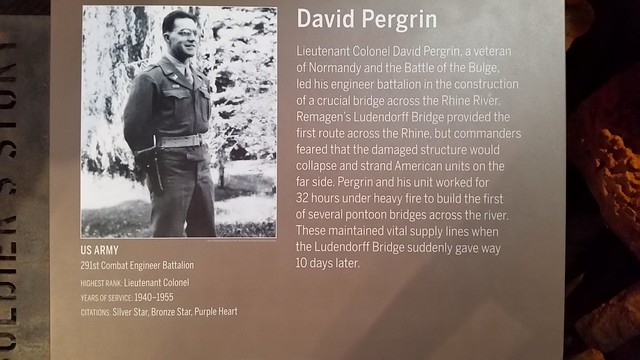 After touring The Road to Berlin we moved upstairs and took a similar walk through exhibits and videos in The Road to Tokyo. 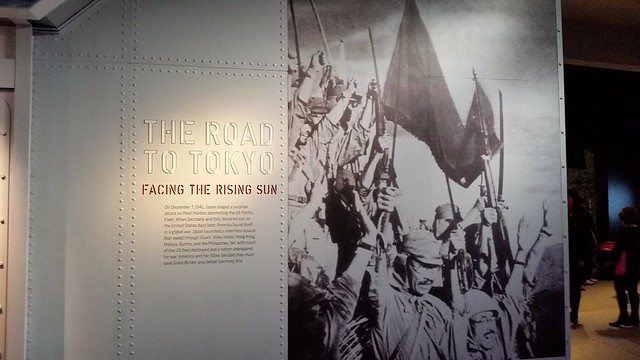 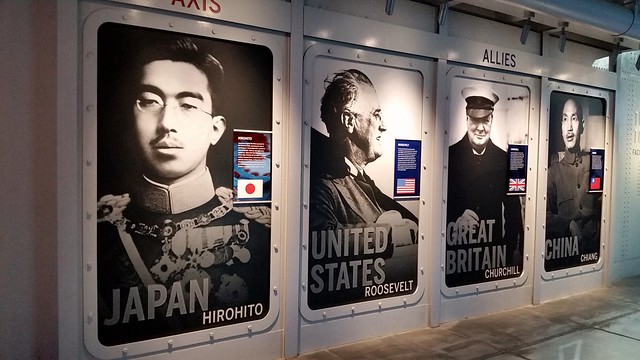 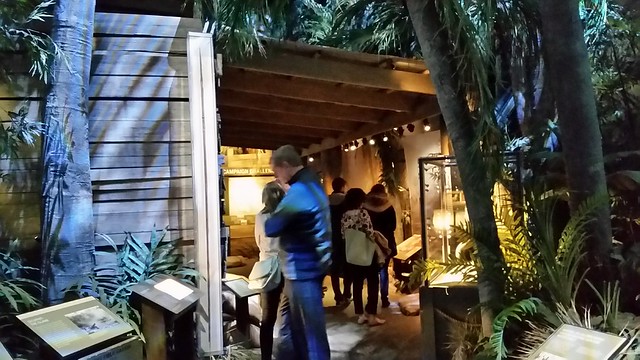 Next we visited the US Freedom Pavilion: The Boeing Center which houses a display of aircraft and a few military vehicles. 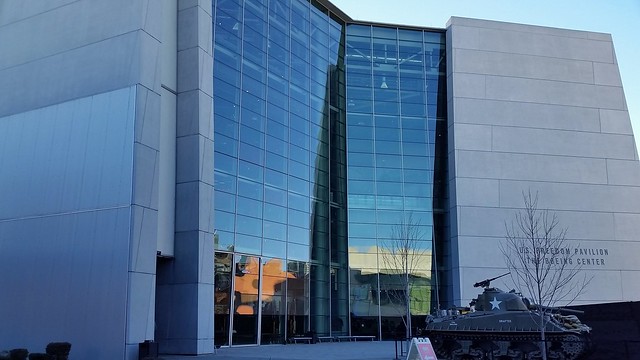 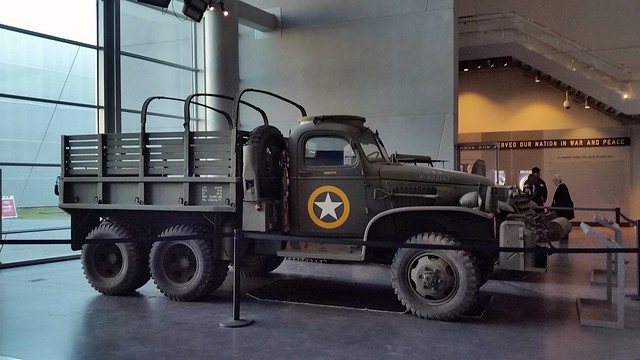 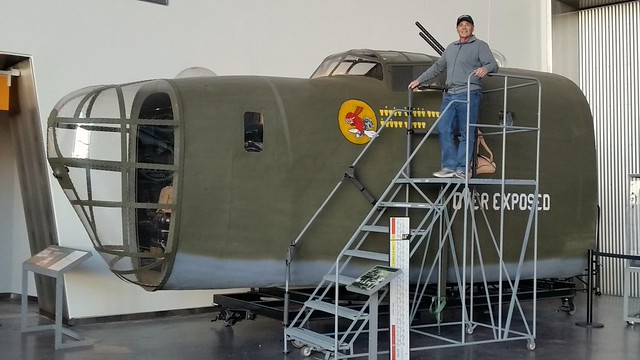 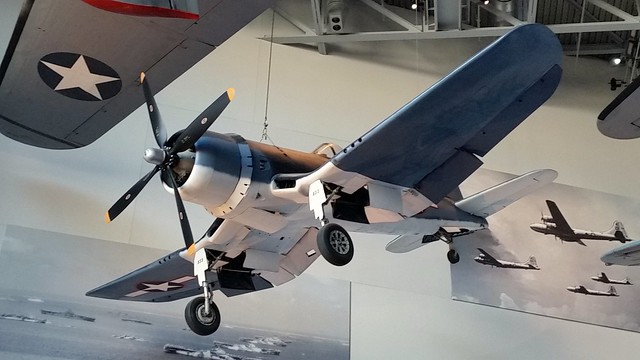 The National WWII Museum is a “can’t miss this” stop in a visit to New Orleans.  It is so good that even a non-history person will enjoy it.  Pam doesn’t really like war museums and thought about finding a Starbucks to sit in while John visited the museum.  But she decided to go with him and found she really enjoyed the experience!

Next up for us is a visit to the famous French Quarter.  More on that later . . .