A Stop Near Gulf Shores, AL

Posted on January 6, 2017 by placestheygo

We left Holiday Cove RV Resort in Cortez, FL on New Year’s Day and drove north a hundred miles to Hudson, FL to have our small kitchen window repaired at Suncoast Designers.  Suncoast does a great job cleaning and re-sealing dual pane windows, but there are a couple of areas in the process where improvement is needed.  One area is communication with the customer as to the process.  An example is that there is no information on what time they would begin working on your coach.   The office hours are listed as 7 am to 3 pm and during our first visit someone came to us at about 7:15.  On Tuesday morning there was a loud pounding on our door at 6:30 am by a worker with paperwork!  Someone then came at about 7:15 and removed the window.  With the early start and just one little window to fix we thought they would complete the job during the morning.  When 2:30 came with no sign of our window, we went to the office to be sure they hadn’t forgotten about us.  We were assured that they worked until all jobs to be completed that day were finished and, sure enough, they came and re-installed the window at about 3:30.  They also re-caulked the five windows that leaked after the November repairs.

As we reported in a previous post, Suncoast did a great job on cleaning and re-sealing all our windows in November.  But we later found numerous spots where damage was done during the re-installation process, and we found that five windows leaked during a downpour while in Cortez.   Looking back on our experience we think part of the problem was that Suncoast overbooked work for the week of our visit.  They estimate that repairing more than seven windows will take 4+ days so we made our appointment for a Monday and planned to stay there all week.  They did not work on our coach on Monday.  All thirteen windows were removed on Tuesday.  On Wednesday we spoke with another customer and found that the parking area was scheduled to be re-graveled on Friday so all coaches had to be gone by then.  We inquired at the office and were informed the information was accurate but they were sure our work would be completed by the end of the day on Thursday.  We could remain in the lot Thursday night but had to be gone by 7:00 Friday morning.  Great, our reservation in Cortez was to begin on Saturday!  Fortunately, our spot at Holiday Cove was unoccupied so we were able to arrive a day early.  Again, a little communication would be helpful!

We now think that two things contributed to the poor reinstallation process.  The first is that they were in a hurry to get all jobs completed by the end of the day Thursday.  The second is that we didn’t remain in the coach during the process to look over their shoulder.  We shouldn’t have to do this but apparently it was necessary.  On our return visit this week we went into the office and suggested someone with authority might want to take advantage of our visit and eyeball the damage.  One of the managers came to the coach that afternoon and appeared to be very embarrassed by the poor work.   He also stated that they were changing some procedures and that someone from the office would inspect each coach at the completion of the project before payment was made.

So we left pleased with the overall repairs and will live with the areas of damage, most of which no one but us would notice (Suncoast offered to pay for any repairs).  We would use Suncoast again but would be sure to supervise anyone working in the coach.  John did this during our second visit and feels they did a good job.

We left Hudson on Wednesday morning a bit later than planned after waiting out some rain showers.  Our next stop was Summerdale, AL for a brief visit to the nearby Gulf Shores beaches.  Summerdale is 440 miles from Hudson,  double the 200 miles we usually  travel in one day.  But since there was nothing in between that we wanted to see, we decided to just make the long drive.  Leaving Hudson we took US-19 north for about 180 miles.  The road is a beautiful four lane highway that goes through a few small towns.  But for the most part it goes through empty forest and swamp with very little traffic.  Just east of Tallahassee we turned on to I-10 and began our journey west.

A few miles after entering Alabama we turned south on Baldwin Beach Express for about ten miles to Emmaus RV Park.  This is a very nice little RV park with about thirty paved back-in sites at a Passport America rate. 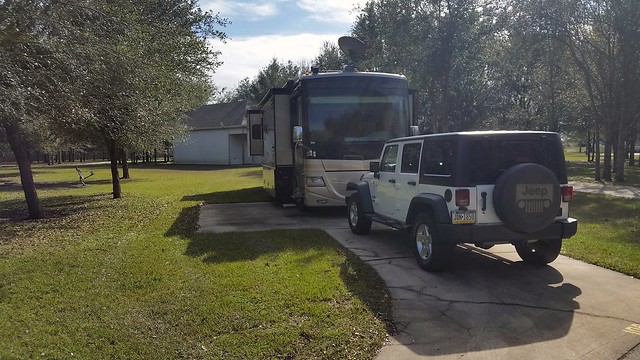 Our plan was to stay here for two nights, giving us a full day to drive down and explore the beach area.  But with heavy rain scheduled for Friday we decided to extend our stay for the day and wait to continue our travels on the sunny day predicted for Saturday.

Thursday was a beautiful day so we drove twenty miles south to Gulf Shores.  The road along the shore of the Gulf of Mexico is filled with a mix of older small beach houses, newer multilevel rental units, and new high rise condos.  The beach houses are all well-maintained and painted in a variety of colors. 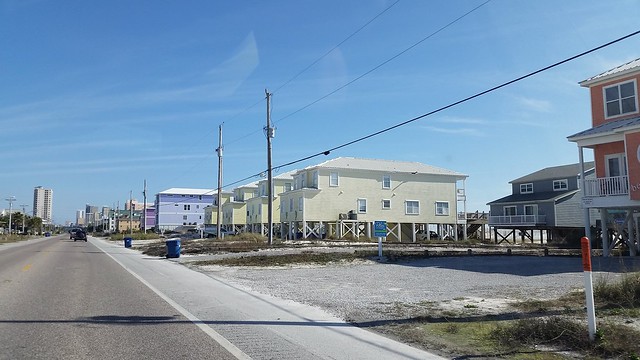 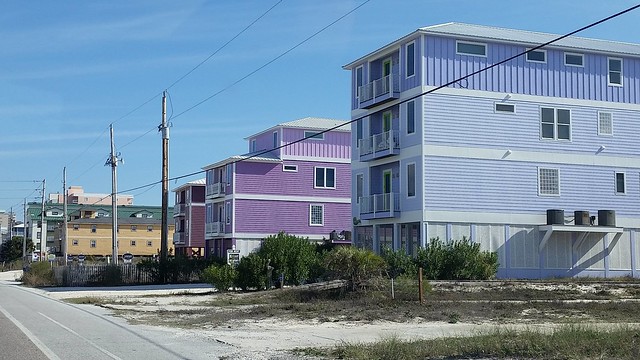 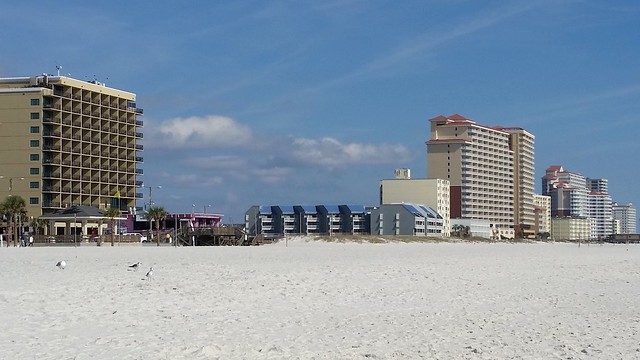 The beaches here are beautiful, with very white, fine sand.  This time of year they are almost empty, but during the season they are filled with vacationers from as far away as Atlanta. 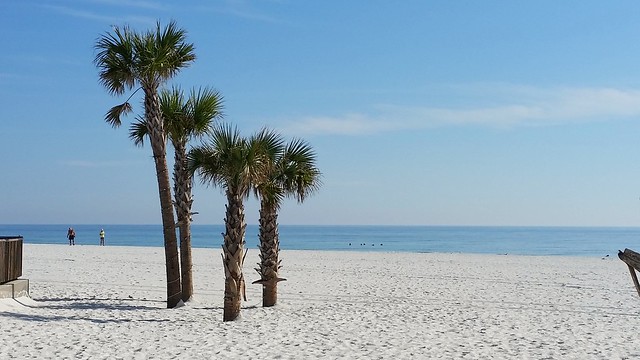 We stopped for lunch at The Hangout, a large beachfront restaurant with a small patio.  As with the beach,  the place is mobbed during the season, but for our visit the main dining area was empty and a small number of people were enjoying lunch in the warm sunshine on the patio. 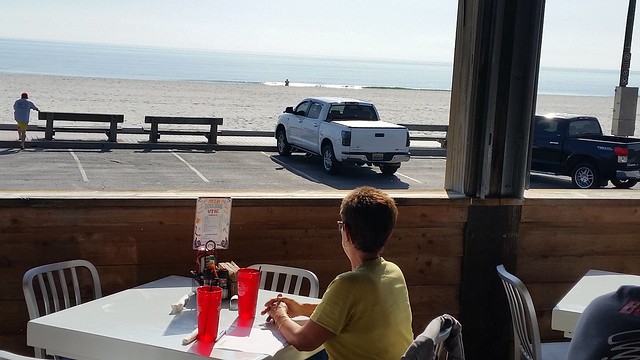 A young coed contemplates returning to class for the upcoming semester

While we ate lunch we participated in a trivia contest for patrons on the patio.  One section of the competition was history, so we had a pretty good chance of doing well in the competition.  While most of the questions were pretty easy, two separated the wheat from the chaff.  The first was the name of the British Liner sunk by a German u-boat off the coast of Ireland in 1915.  The other is the name of the explorer and mapmaker whose name became synonymous with the New World.  The results were collected and tabulated and the winner of the competition was announced, “Pam!”  We suspect she had a little help from someone at her table.  The prize for the winner was a new baseball cap!  It turns out the hat was made by a company called Legacy in Hanover, PA, located just a few miles from our home of 25 years!  Small world . . . 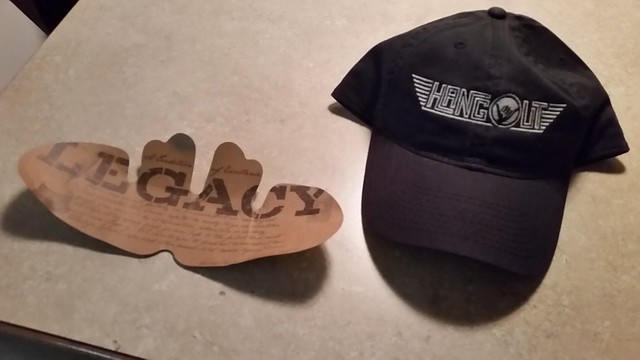 On Saturday we’ll pull up the jacks and head to New Orleans for a brief visit.  More on that later . . . .

Oh, we know almost everyone knew the answers to the trivia questions,  but just to confirm your responses the ocean liner sunk by the Germans was the Lusitania and the explorer was Amerigo Vespucci.  But you knew that ! ! !

38 Responses to A Stop Near Gulf Shores, AL