Posted on January 3, 2017 by placestheygo

It has been a while since our last post, but we really haven’t done much during our stay along the Gulf of Mexico (except for one big activity during the last week of December, more on that later).  We did manage to get in a daily walk along the beach or bike ride around nearby Anna Maria Island (followed by a stop at one of those chain coffee houses). 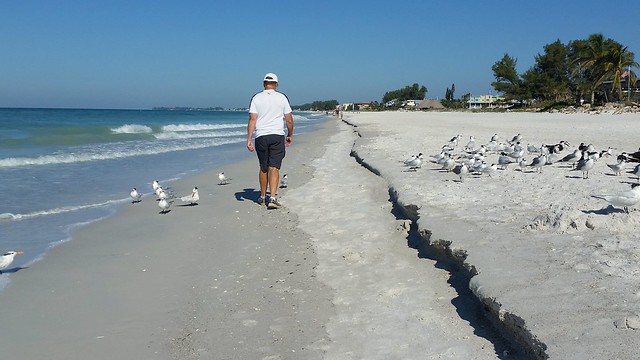 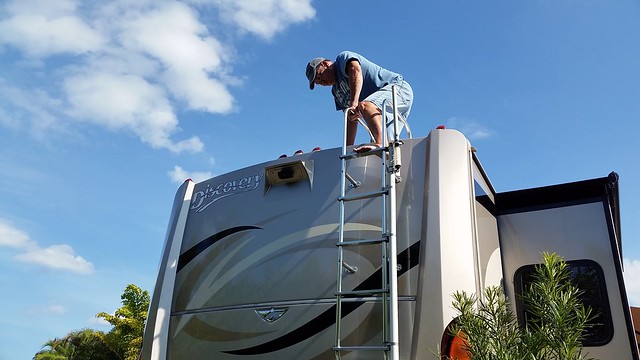 We did enjoy a couple of visits with former colleagues of John’s from his working days.  Brian Cashman was the high school principal at the end of John’s long tenure as a middle school principal.  Brian was willing to take a chance on an old teacher when John asked to return to the classroom for the last few years of his career.  Brian and his wife, Judy, have moved to nearby Parrish, FL so we invited them to join us for lunch at nearby Star Fish Seafood.  Judy was not feeling well that day, but we met again the next week in downtown Bradenton so we could visit with her. 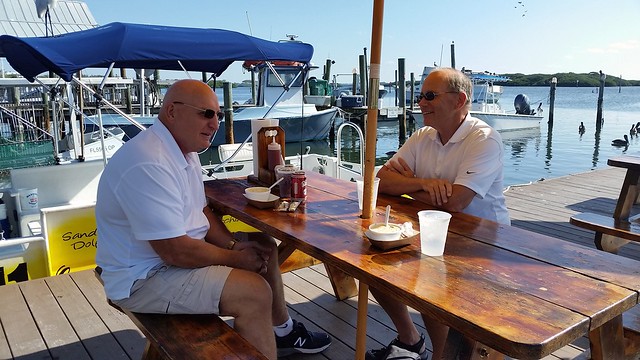 Brian and John exchange stories from the good old days

That same week we found out that Jill Ellis, a former teaching colleague of John’s, was staying with her husband, Jamie, and daughter, Paige, on nearby Longboat Key for a few days.  We had a very nice lunch with them at a restaurant in St. Armand’s Circle.  Jill has made this blog a couple of times previously as they now live in Indianapolis and we have stopped there twice as we passed through on our travels east or west. 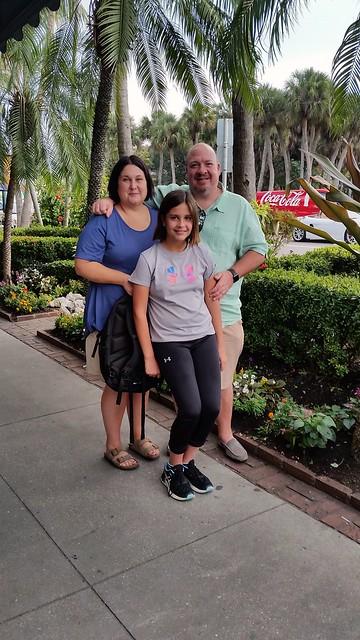 Our slow paced stay in Cortez began to pick up speed on Christmas Day when our daughter, Jessica, arrived at Tampa Airport with her fiance, Dan, and his daughter, Ella. 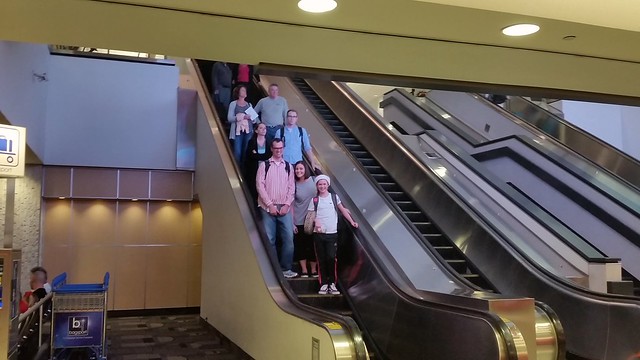 During our visit to York, PA in September, Dan popped the question.  This allowed for some intensive planning sessions and the scheduling of a small wedding at the beach on Anna Maria Island.  The timing and location were perfect for the week after Christmas since we were already going to be in that area and Dan’s parents, Paul and Janice, recently purchased a winter home in Ft. Myers, just a hundred miles to the south.  The night before the ceremony the wedding party enjoyed a nice dinner at The Waterfront in the village of Anna Maria. 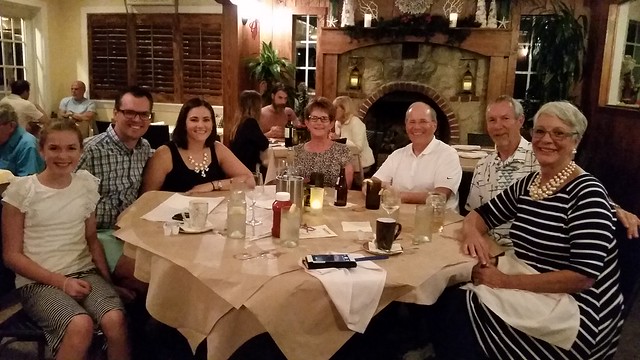 The next day was “Showtime” on the beach at the end of White Avenue on Anna Maria Island. 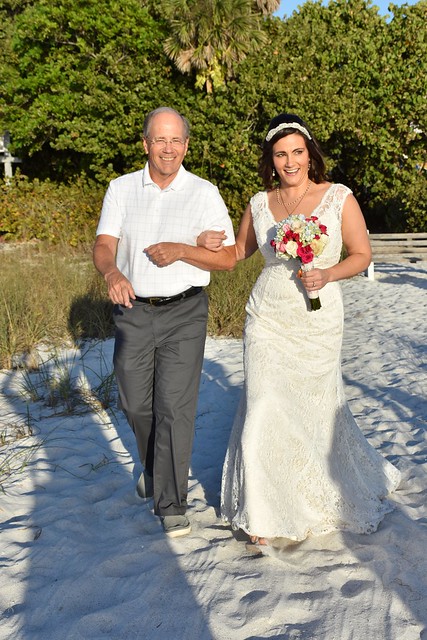 Proud Papa escorts the bride out to the beach 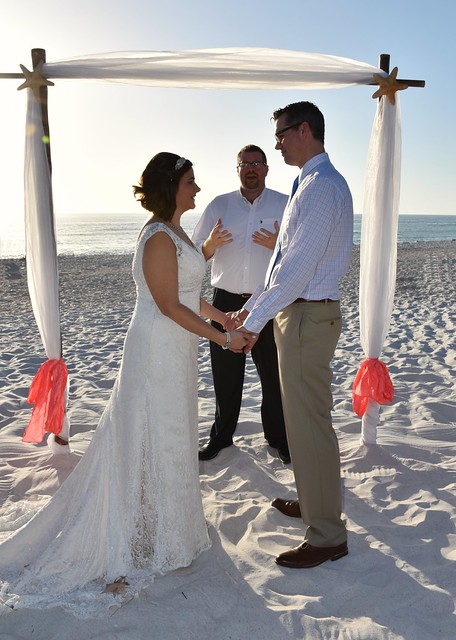 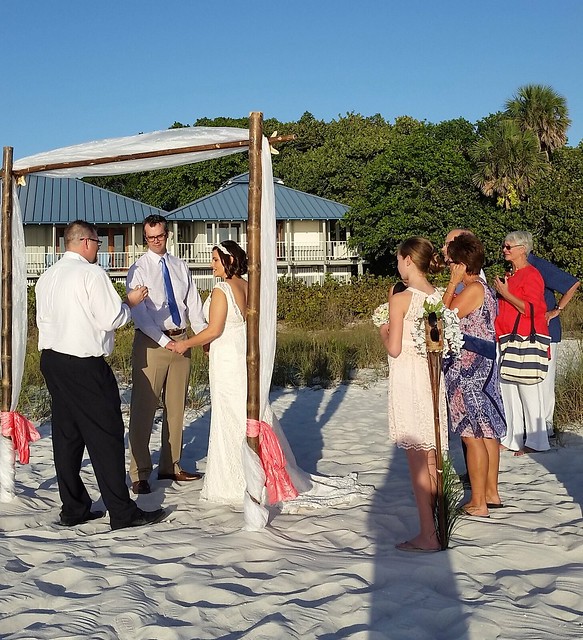 Following the exchange of vows the wedding party moved to the shore for the Blessing Stones tradition.  In this tradition, which can replace the throwing of rice, each party made a silent wish for the new couple and threw a stone into the surf as a symbol of the wish. 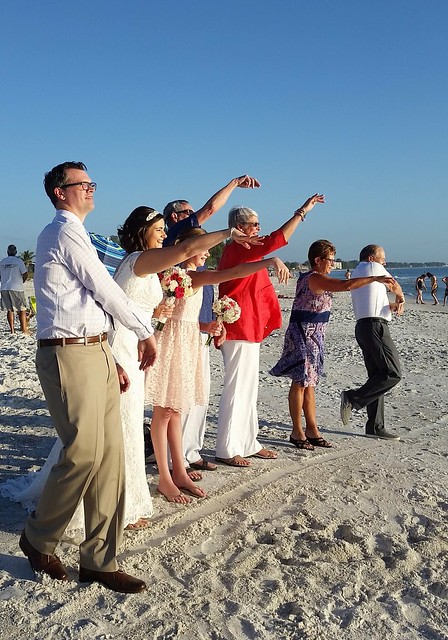 Next, Jessica, Dan, and Ella completed the “Blending of the Sands” ceremony, an  alternative to the ” Unity Candle” ceremony.  Like a Unity candle the pouring of different colored sands together is used to symbolize the joining of the three as one family. 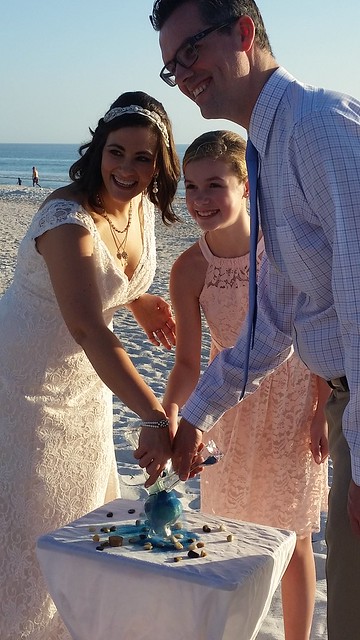 Blending of the Sands 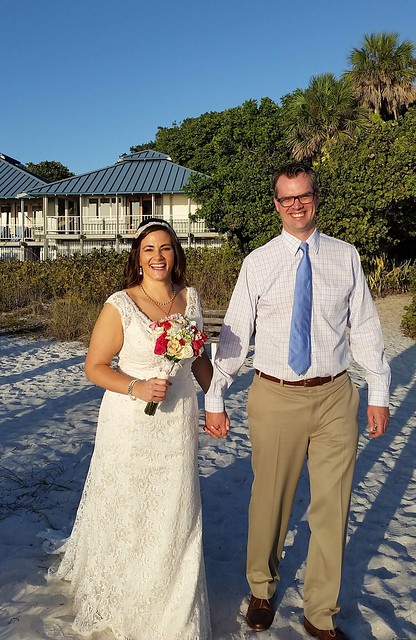 The wedding package included a photographer (you had to give her back after the wedding) but we knew we didn’t want to wait for her to send us the photos (Must be able to immediately post to Facebook!) so we asked our good friends, David and Karen, (Cody’s parents) if they would take a couple of pictures with our phone.  David took photos with our phone and Karen made a video with Jessica’s phone that she will play at a reception they will hold for friends in the middle of January back in York, PA.  We asked both of them to put down the phones and join the wedding party for a photo. 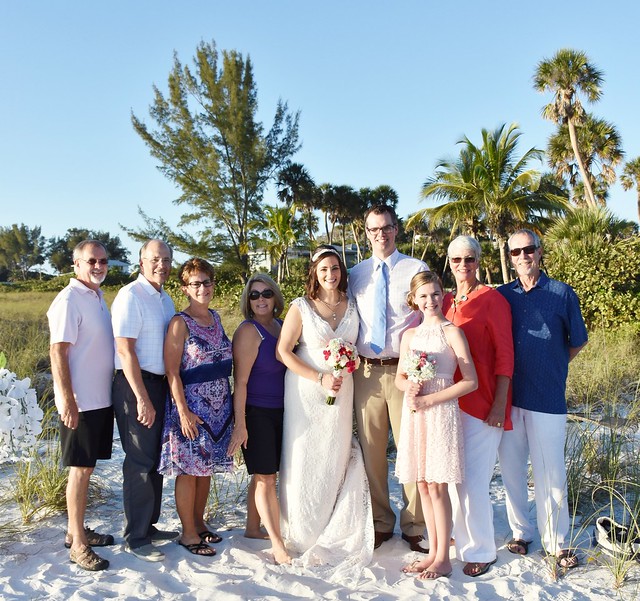 They both did a great job recording the entire event.  In fact, David took almost all the wedding photos in this post.  Many thanks to both of them ! 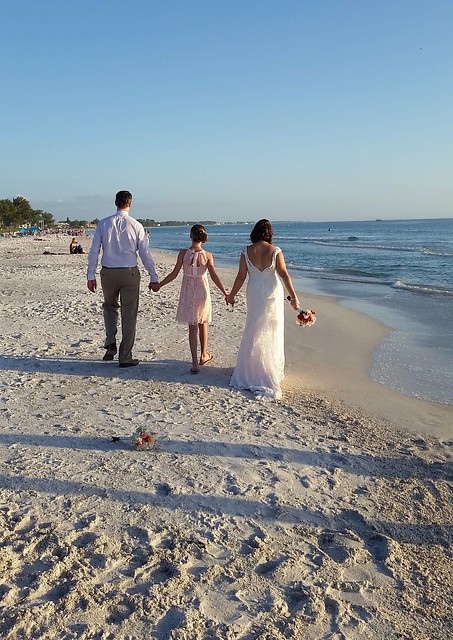 Following the ceremony and photos along the shore we headed for a reception dinner at the Sign of the Mermaid, an eclectic little restaurant on the island just a few miles north of the beach. 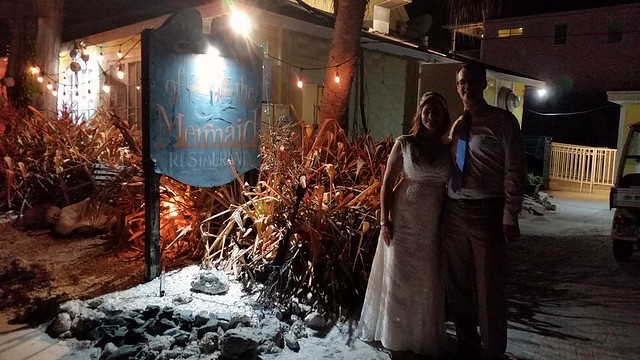 The Scotts just outside the Sign of the Mermaid

This small restaurant is located in an old (1913) beach cottage.  It looks a bit run down (we loved the atmosphere) but the food and the service were both outstanding. 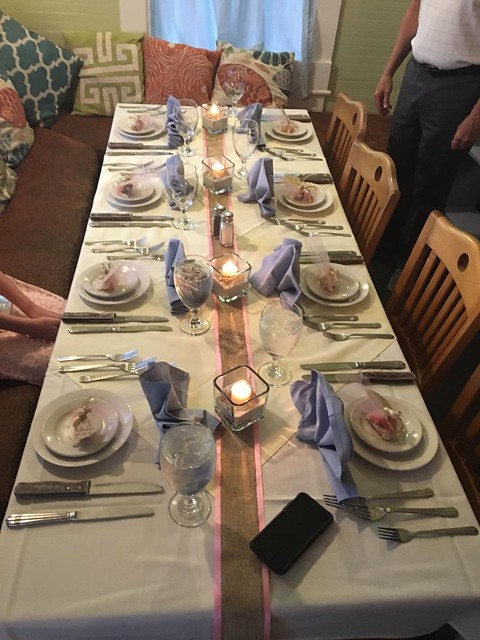 Our table is ready (Pam made all the table decorations) 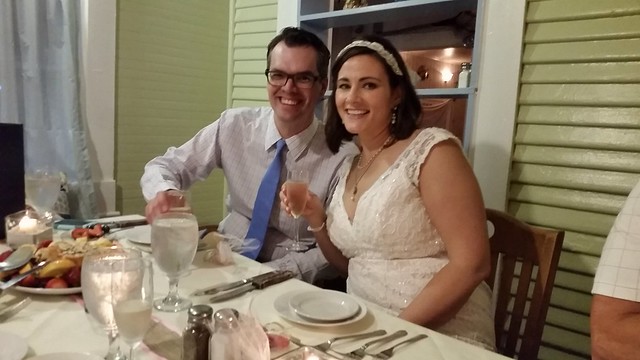 Following the dinner Dan and Jessica headed to Sarasota in our Jeep to enjoy a few days together at a hotel along Sarasota Bay.   Our son, Kevin, had planned to use his pilot status to catch a flight to Sarasota from Atlanta to attend the wedding.  But with all the bad weather in the north, the many flight cancellations and delays caused a backup and all flights south filled up.  But he was able to get a flight later in the week and joined us for an overnight stay.  The three of us (John, Pam, and Kevin) met Dan and Jessica at a restaurant in Sarasota and enjoyed a lunch together (forgot to take a photo!) before Kevin returned to the airport and we drove the newlyweds south half way to Ft. Myers.  We met Dan’s parents there and they took the newlyweds (and Ella) to the airport in Ft. Myers for a return flight home.

We took advantage of our last few days in Cortez to relax with a few bike rides and, of course, a visit to one of those chain coffee shops.  David and Karen often rode to Starbucks with us, but our last day David drove over in the car which allowed our good friend, Cody, to join us. 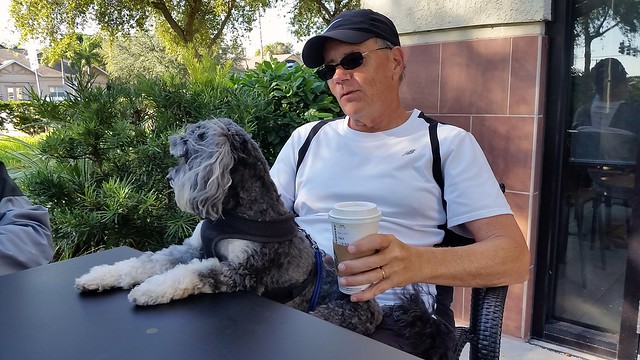 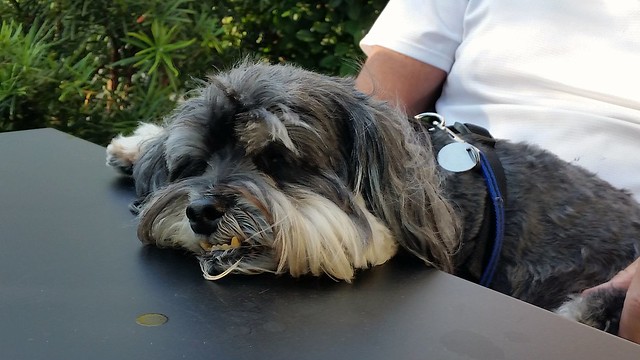 Guess the conversation was a bit boring!

Our stay in Holiday Cove RV Resort ended on New Year’s Day and our plan was to head north to Tallahassee and turn west.  But first we need to stop back in Hudson, north of Tampa, for another visit to Suncoast Designers.  If you read the last blog, you may remember that we stopped there for a week in November to have our windows repaired.  One day early in our Cortez stay Pam looked up at the small window by the kitchen area of the motorhome and discovered that the inside pane of one side of the window had cracked into a series of spiderwebs. 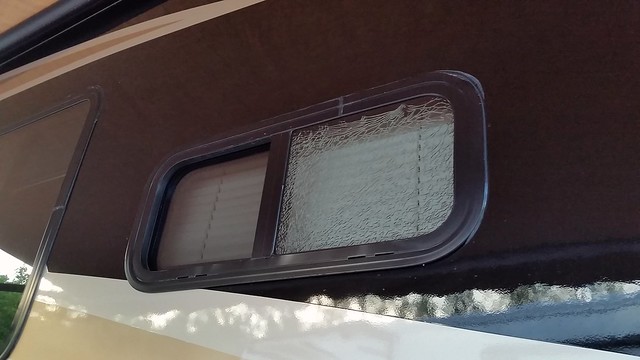 We immediately called Suncoast and scheduled an appointment for January 3rd during our drive back north.  They will replace the glass and reseal four windows that leaked during a downpour we experienced in Cortez.  Suncoast was highly recommended to us by a number of people because of their excellent work.  Well, we must have caught them on a bad day in November as they damaged a number of small areas around the windows during the re-installation.  We have already shared our dissatisfaction with Suncoast and will show them the damaged areas during our “re-visit.”

Once the window is fixed we will head north to the Florida panhandle and begin moving west.  After several stops along the way, we will be spending February in Tucson.  More on that later . . . 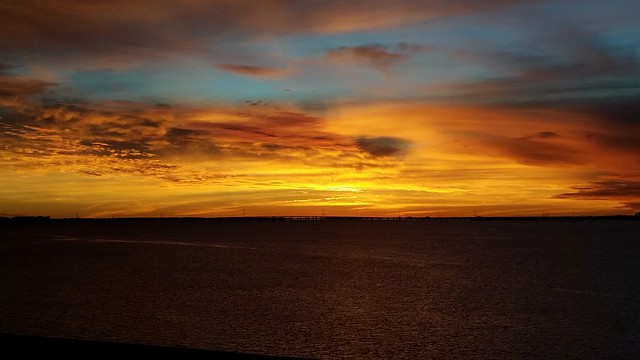 40 Responses to Quiet Days in Cortez, then Wedding Bells