A Stop in Indianapolis

Our route eastward took us through Indianapolis, a city we enjoy, so we stopped there for a few days to visit.  We’ve stayed at  Lake Haven Retreat, a decent RV park just south of the  I-465 beltway, on previous stops in the area so we reserved four nights there again.

On our first full day here we headed downtown to see some sites we missed during our previous visits.  Our first destination was Monument Circle, a circular, brick-paved street that intersects Meridian and Market streets in the center of the downtown. 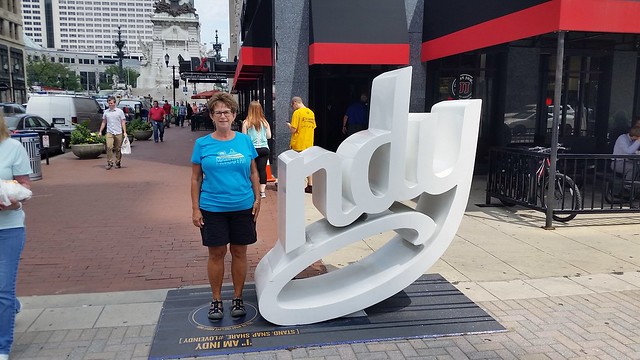 At the center of the circle is the Indiana State Soldiers and Sailors Monument, a 284 foot obelisk.  The monument’s original purpose was to honor Hoosiers who were veterans of the Civil War.  However, it is also a tribute to Indiana’s soldiers who served during the Revolutionary War, the Mexican War, and the Spanish–American War.  The monument is the first in the country to be dedicated to the common soldier. 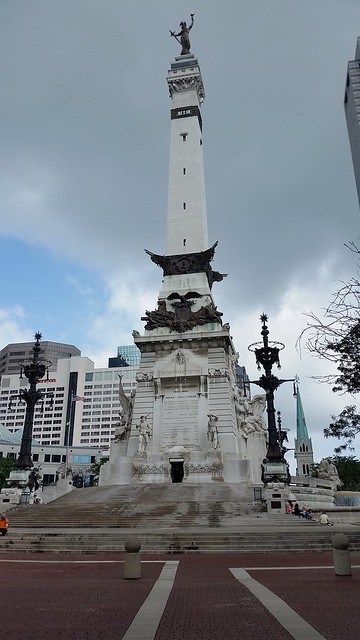 The memorial is ringed with several notable outdoor sculptures and statues. 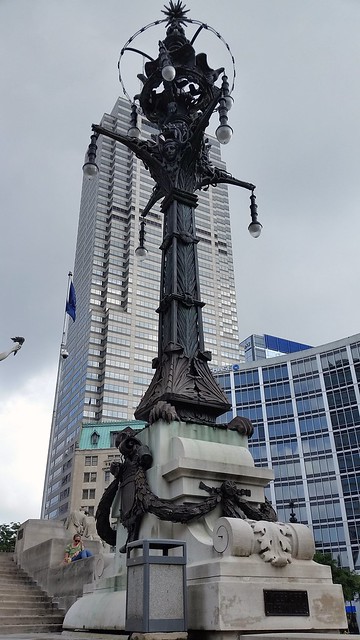 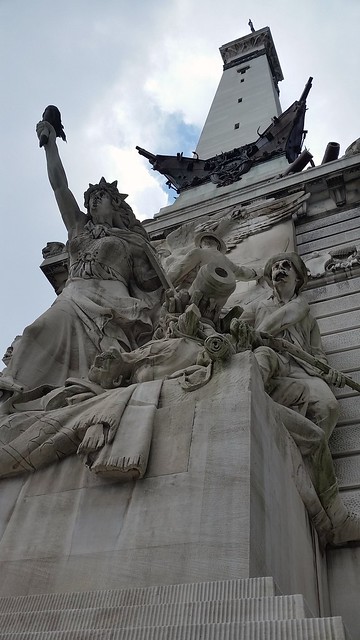 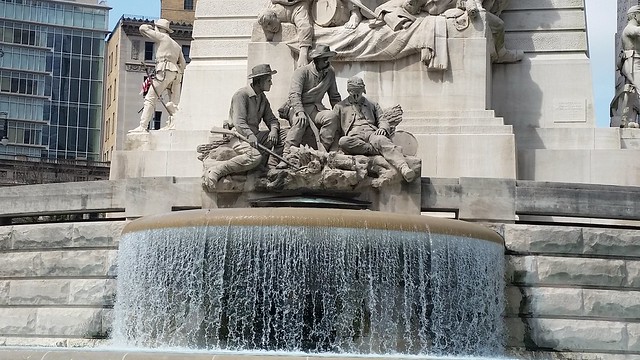 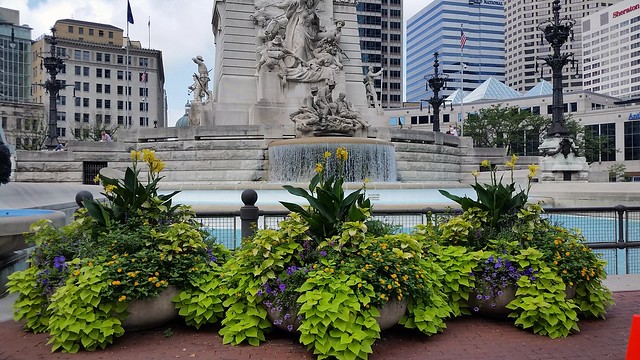 The basement of the monument contains the Colonel Eli Lilly Civil War Museum,  a museum of Indiana history during the Civil War.  Lilly served with distinction in the Civil War (spending the last years of the war as a POW) and later founded the famous drug company.  He donated a large amount of money to the construction of the monument. 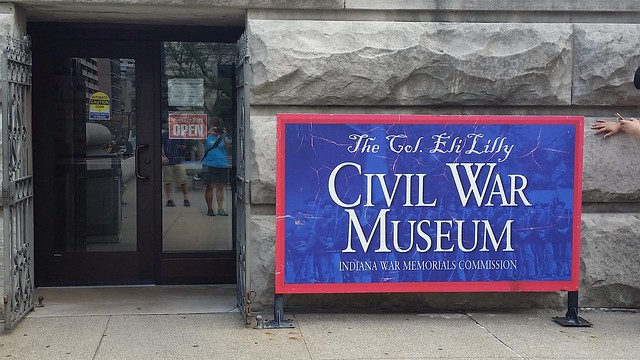 If you look to the west down Market Street,  you see the main entrance to the Indiana State House just two blocks away. 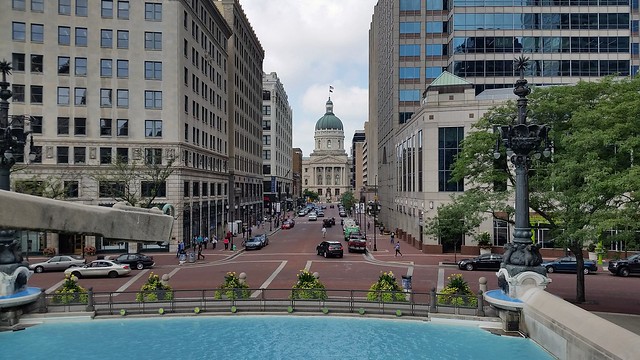 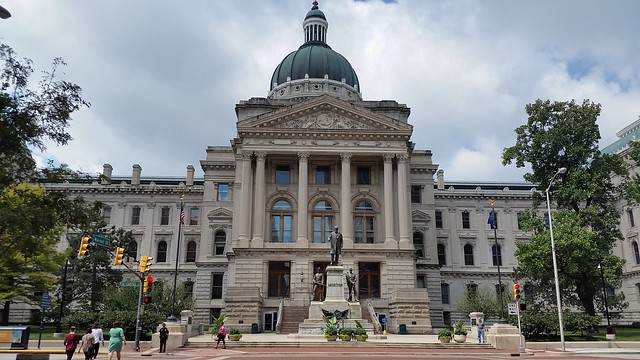 The Indiana State House is the state capitol building of Indiana. It houses the Indiana General Assembly, the office of the Governor of Indiana, the Supreme Court of Indiana, and other state officials.   We stopped in to see Gov. Pence but apparently he was off touring the country. 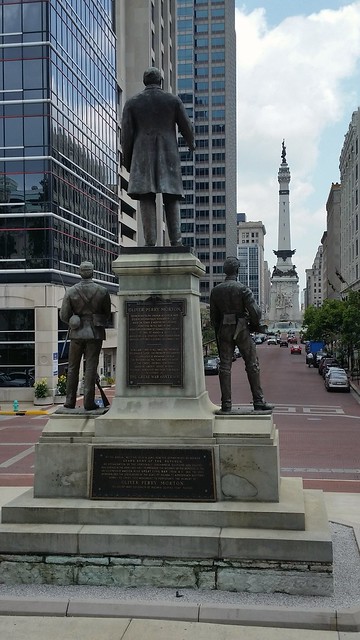 Looking past the statue of Oliver Moore, governor during the Civil War, toward the Soldiers and Sailors Monument 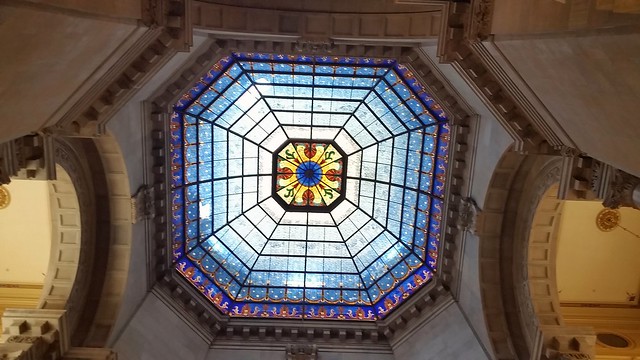 Looking up at the dome inside the capitol building 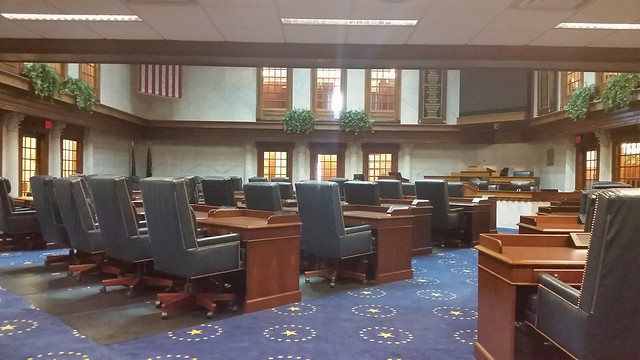 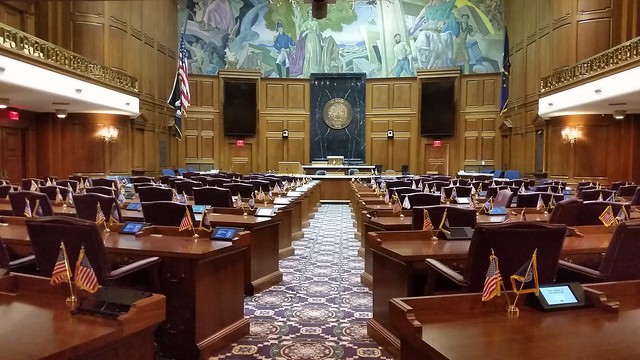 After touring the capitol we walked back east past the monument to the City Market for lunch.  Built in 1886 the market now is filled with food vendors and has a nice eating area on the balcony surrounding the vendors. 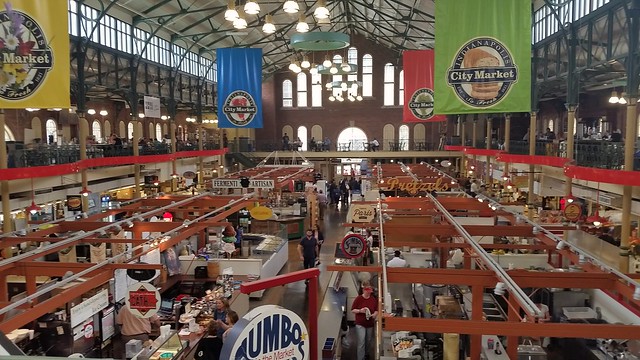 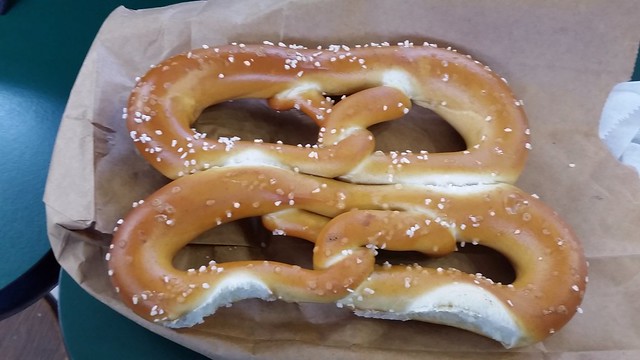 The humidity finally passed out of the area and Sunday afternoon had a moderate temperature.  So we took advantage of the great weather for a walk along the Indiana Central Canal, located just a couple of miles west of the Capitol Building.  The Indiana Central Canal was intended to extend for 296 miles and connect the Wabash and Erie Canal to the Ohio River.  But the state ran into financial troubles and only eight miles were built.  Today about two miles of the canal are still in existence and lined with condo buildings and restaurants with a wide sidewalk running along either side.  It’s a great place to spend a beautiful summer afternoon. 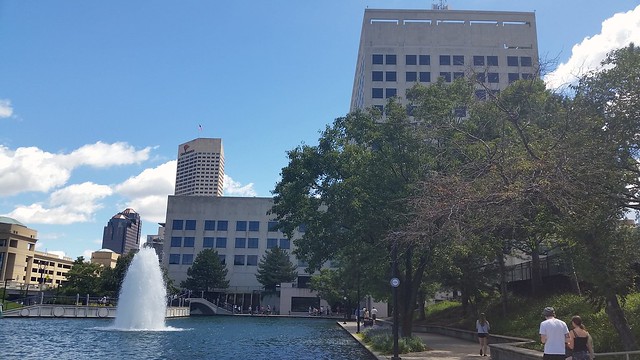 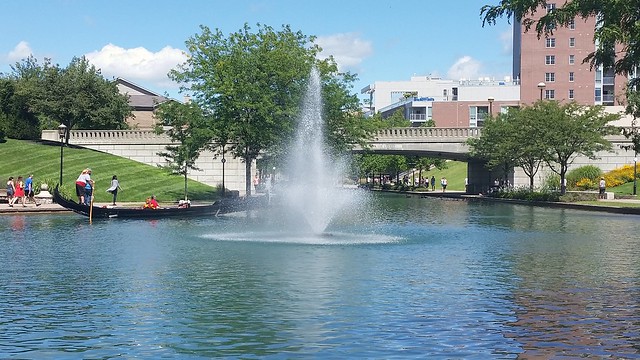 Note the gondola on the left 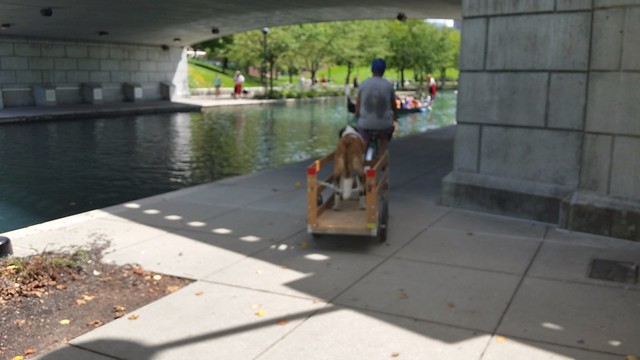 One way to take a large dog for a bike ride (sorry for the focus, he went by quickly)

The nearby JW Marriott Hotel provides great reflections of the passing clouds. 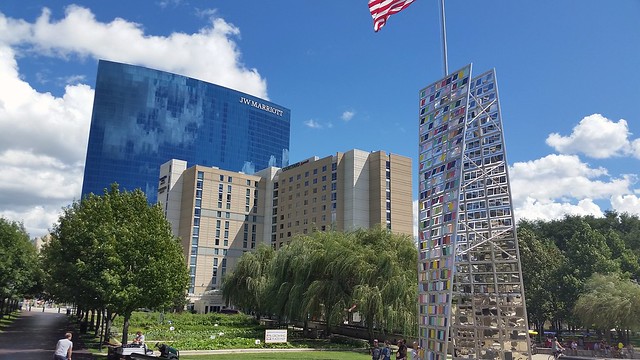 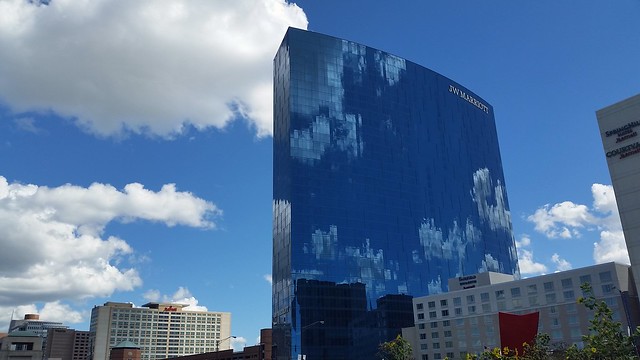 Returning to the RV park we took our chairs down to the pond to enjoy some quiet reading time. 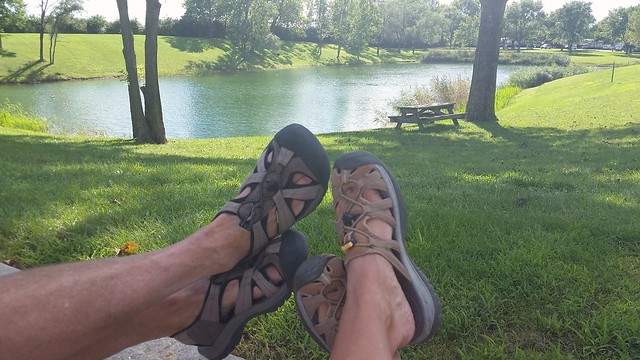 OK, not exactly “lunch with a view” but it’ll have to do

On Monday, our second perfect weather day, we drove to the north side of Indianapolis, parked the Jeep, and rode the beautiful Monon Bike Path north into Carmel.  A former teacher from the History Department where John taught (Susquehannock HS) now lives there and we were meeting her for lunch. 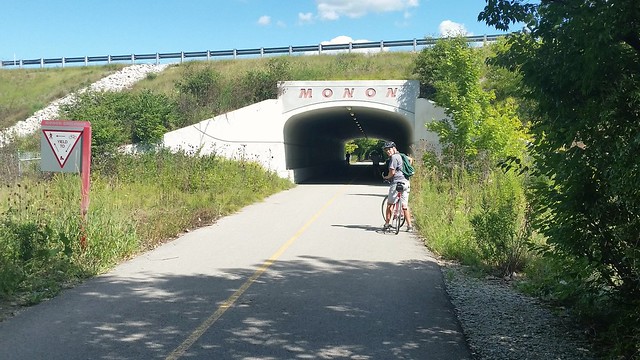 We met Jill at a nice restaurant in downtown Carmel with outdoor seating right along the bike trail.  We had such a nice time reminiscing about our past experiences, we forgot to get a photo! 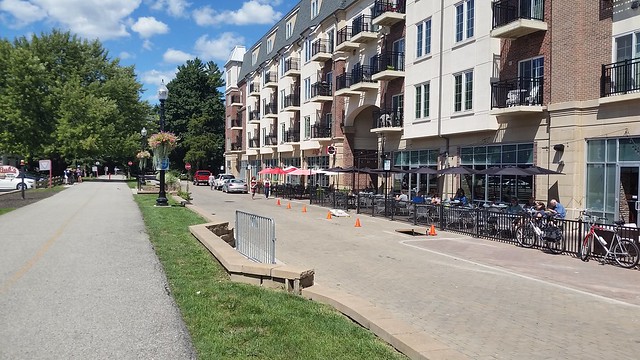 We now head about 130 miles northeast to Celina, OH for a couple of repairs to the motorhome.  Kevin Mallory of Cruising America RV has done work for us in the past and we really like his work, so if we need something done in the coach (he doesn’t do engine or chassis work) we try to have him do it.

18 Responses to A Stop in Indianapolis