We left Sioux Falls, SD on Friday and headed east on I-90 into Minnesota.  After about 150 miles we turned south on I-35 and entered Iowa.  We drove our usual one day limit (about 200 miles) and settled into a spot at Oakwood RV Park on the south side of Clear Lake.  The park is not fancy but we only planned for an overnight stay and Oakwood served that purpose well with long pull through sites.  The sites share utilities with the adjacent site, a situation we don’t care for, but the sites are long enough that you are not side by side with your neighbor who is parked in the opposite direction. 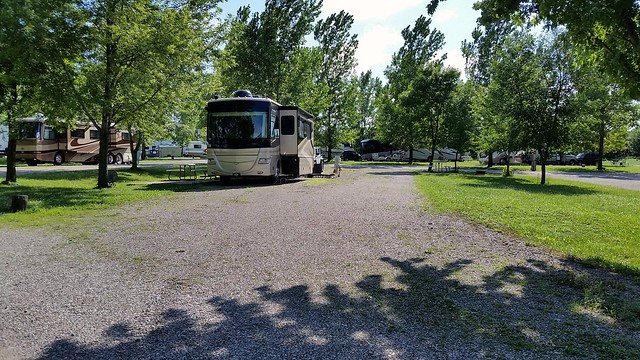 Our site with the neighbor site empty 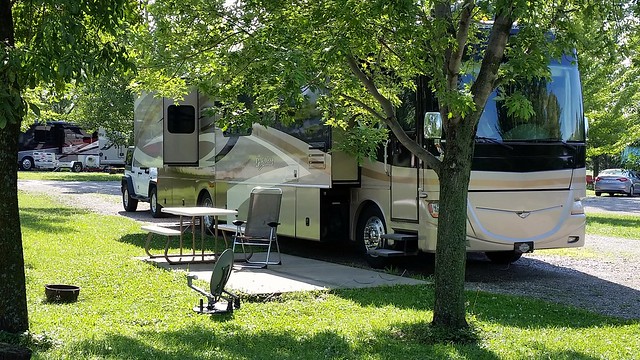 This stop in Clear Lake was not just a random one convenient for an overnight stay.  John wanted to visit a site that is legendary in the history of rock and roll, the legendary Surf Ballroom.  For some readers the title of the blog was enough to tip you off as to what occurred here.  For others, a bit of background is needed.  “The day the music died” is taken from the first verse of Don McLean’s 1971 mega-hit “American Pie.”   It is a reference to the death of rock and roll stars Buddy Holly, Ritchie Valens, and J. P. “The Big Bopper” Richardson who were killed in a plane crash just north of town a few hours after doing a show in the Surf Ballroom in February of 1959. 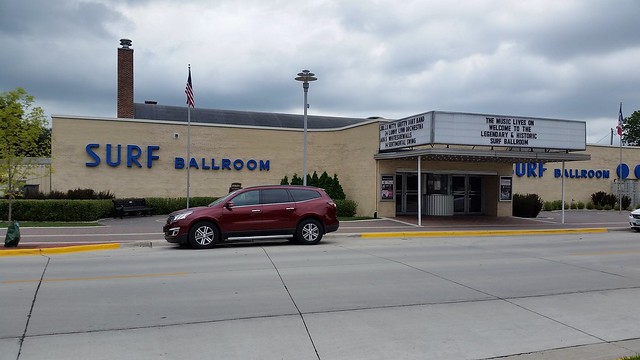 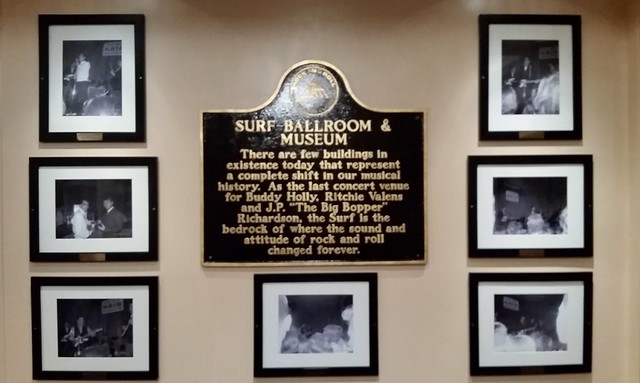 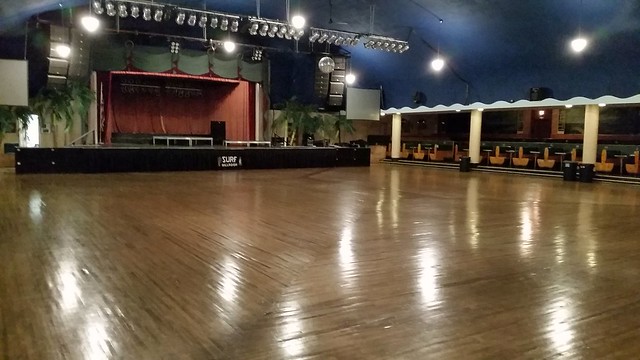 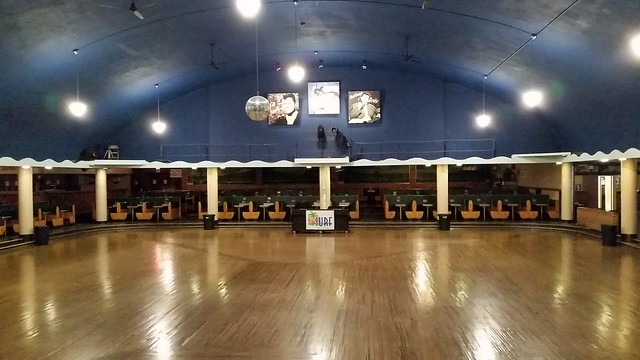 Next to the stage is a small “green room” where performers wait before going on stage.  The walls are filled with signatures, some by the famous and some by the not so famous. 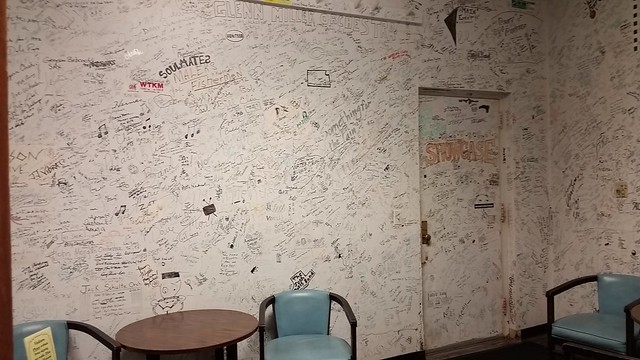 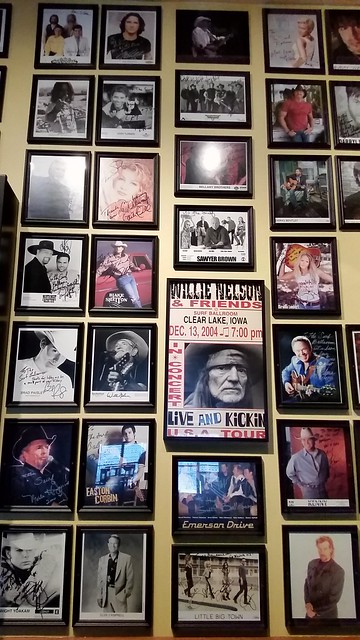 In 1959 Buddy Holly was a big deal in the world of rock and roll.  He had a string of number one hits during the previous year and had performed on the Ed Sullivan Show twice.  He and his band were touring the mid-west as part of what was called the “Winter Dance Party.”  Also on the tour were the young singers Richie Valens (of La Bamba fame), J.R. Richard, who was known as the Big Bopper (Hello Baby), and Dion and the Belmonts (of Run Around Sue fame). 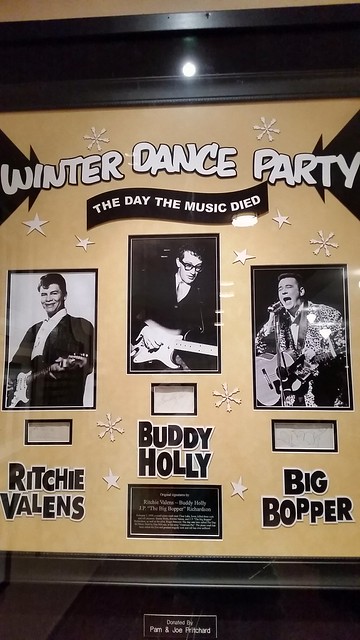 The show’s schedule had the group criss-crossing the mid-west in January during one of the coldest winters on record, with long distances between performances.  The long journeys between venues on board the cold, uncomfortable tour buses adversely affected the performers, with cases of flu and even frostbite.  After stopping at Clear Lake to perform, and frustrated by such conditions, Holly decided to charter a plane (a four seat Beechcraft Bonanza) to reach their next venue.  One of the other three seats was suppose to have gone to a member of Holly’s band, a guy named Waylon Jennings, but he gave the seat to Richardson, who had flu.  Jennings went on to have a successful career in country music.  We know at least one of our readers will remember him as the narrator for the TV show The Dukes of Hazzard.  He also composed and sang the show’s theme song.  The fourth seat went to Richie Valens after he “won” a coin toss with another member of the band.

The pilot, a 21 year old local named Roger Peterson, took off in inclement weather, although he was not certified to fly by instruments only. Shortly after 1:00 am on February 3, 1959 Holly, Valens, Richardson, and Peterson were killed instantly when the plane crashed at full throttle into a cornfield soon after take-off from the nearby Mason City Airport.

After visiting the ballroom we drove about six miles north to visit the site of the crash, which is still a corn field.  The field is private property but there is a path that leads from the road to the exact spot of the crash.  A large set of glasses similar to those Holly wore sit at the access point to the crash site. 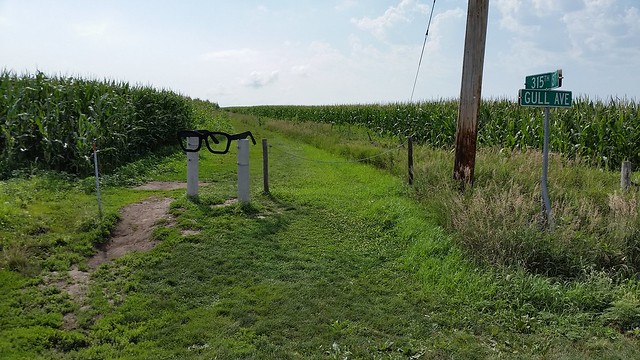 About a quarter mile from the road, at the location of the crash, there is a stainless steel monument that depicts a guitar and a set of three records bearing the names of the three performers who perished in the accident.  Next to the monument are stainless steel wings with the pilot’s name. 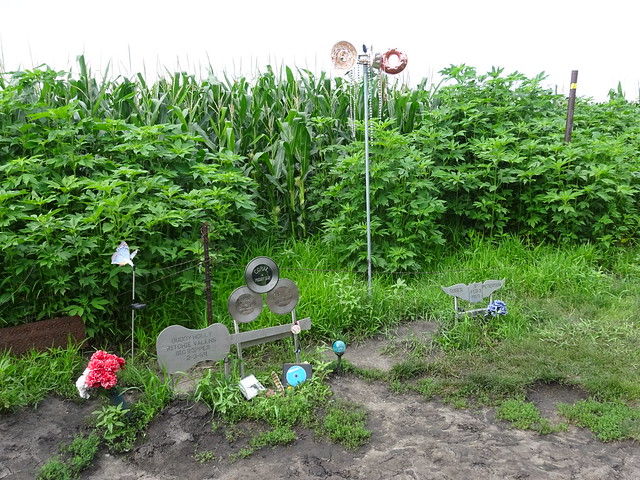 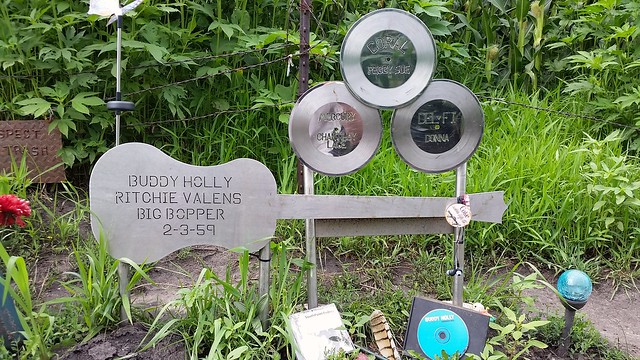 We planned to only stay in Clear Lake one night, but when the predicted early morning rain stretched into the afternoon we extended our visit another night.  We were pleased with our decision as it rained heavily off and on all day.  Between the rain we took the opportunity to do some more exploring of the area.  The town of Clear Lake (pop. 7,700) sits on the east end of Clear Lake, a spring-fed lake that is about four miles long and two miles wide.  The lakeshore is dotted with beautiful homes with water access for boating. 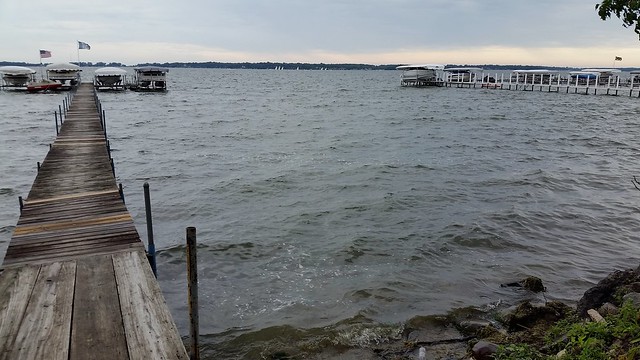 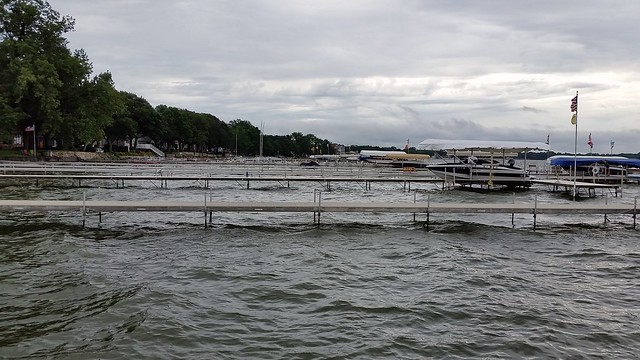 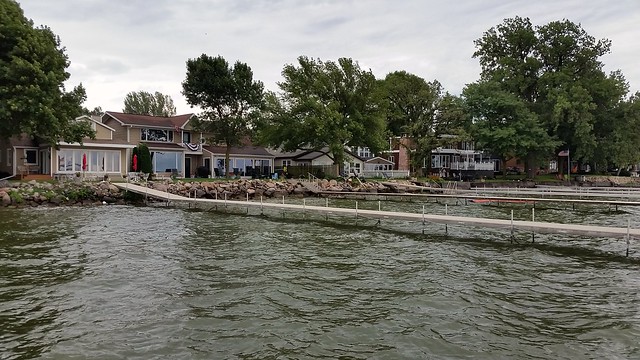 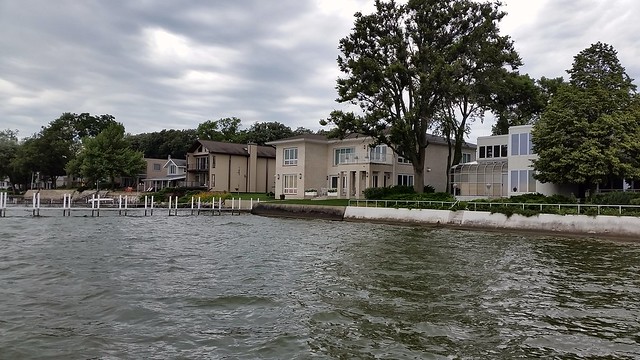 After checking out Clear Lake we drove about eight miles to the east for a visit to Mason City.  Mason City is widely known for its collection of Prairie School architecture (marked by horizontal lines, flat or hipped roofs with broad overhanging eaves, and windows grouped in horizontal bands).  At least 32 houses and one commercial building were built in the Prairie Style between 1908 and 1922, 17 of which are listed on the National Register of Historic Places and eight more are contributing properties to a historic district.   The first two Prairie structures, the Dr. G.C. Stockman House (1908) and the Park Inn Hotel and City National Bank Buildings (1909–1910) were both designed by Frank Lloyd Wright. 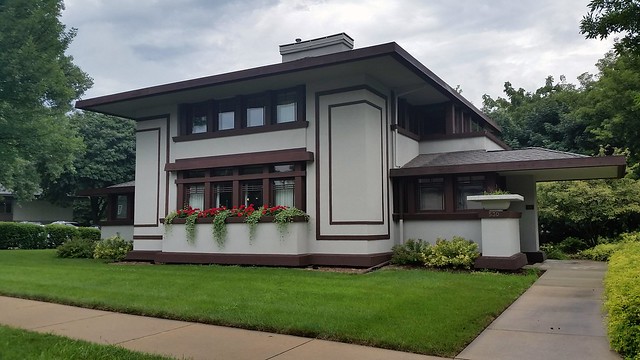 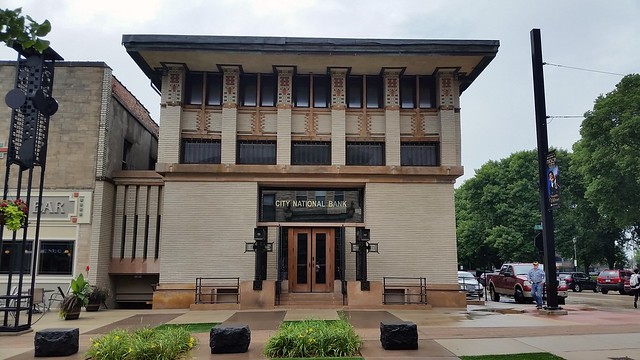 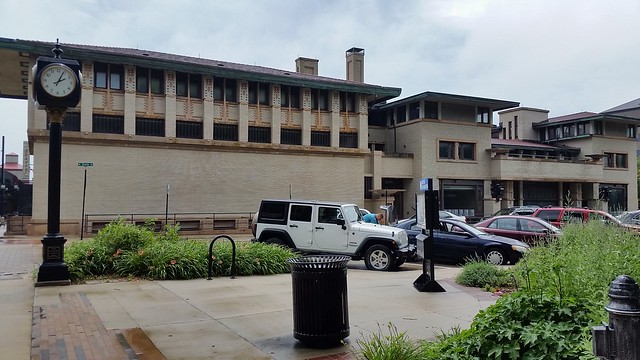 The most famous native son of Mason City is Meredith Willson, a famous musician and composer who wrote The Music Man and The Unsinkable Molly Brown. 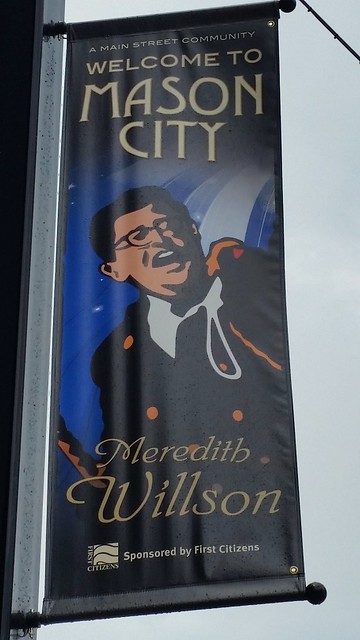 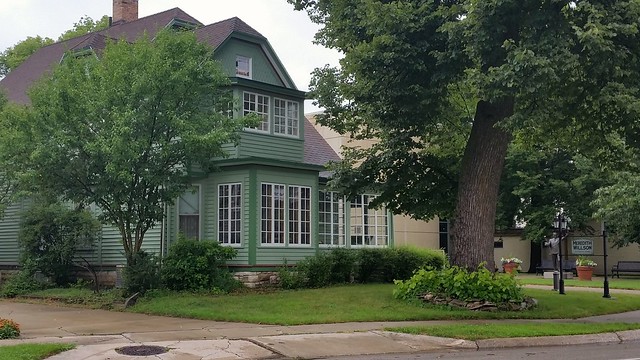 The sky finally has cleared so it’s time to continue our journey.  Next up is a stay at a Corp of Engineer park just north of Iowa City, IA.  More on that later . . .

21 Responses to The Day the Music Died – Clear Lake, IA