We ended our last post with an iconic picture from the Black Hills of South Dakota, the faces of Mt. Rushmore.  As we stated then, the Rushmore sculptures are quite impressive, but the site holds no historical significance and none of the four Presidents depicted ever visited the area.  South Dakota historian Doane Robinson is credited with conceiving the idea of carving the likenesses of famous people into the Black Hills region of South Dakota in order to promote tourism in the region.

Just 15 miles from Mt. Rushmore is a monument to a legendary Indian leader who actually lived in the area.  The Crazy Horse Memorial is a mountain monument under construction on privately held land depicting Crazy Horse, an Oglala Lakota warrior, riding a horse and pointing into the distance.  The memorial was commissioned by Henry Standing Bear, a Lakota elder, to be sculpted by the late Korczak Ziolkowski.  He informed the sculptor, “My fellow chiefs and I would like the white man to know that the red man has great heroes, too.”  Today the site is operated by the Crazy Horse Memorial Foundation, a private non-profit organization.   The story behind the memorial and Korczak Ziolkowski is a very interesting one but much too long to cover in a blog, so we encourage you to do some research if interested.

The memorial has been under construction since 1948 and is far from completion.  Ziolkowski refused all offers of federal funding as he felt that the project was more than just a mountain carving.  He feared that his plans for the broader educational and cultural goals of the memorial would be overturned by federal involvement.  Today the memorial is a non-profit undertaking, and still receives no federal or state funding. The Memorial Foundation charges fees for its visitors center and earns revenue from its gift shops. With limited funding, progress on the mountain is slow and may never be completed.  But that doesn’t matter, just having the face of Crazy Horse overlooking the land of his people is already enough.

OK, enough of that!  Let’s look at our visit to the monument, our third in the past 25 years.  Fortunately for us, our friends, Steve and Joan, are working at Crazy Horse this summer.  In fact, one of Steve’s duties is to conduct small group tours using a van to take visitors up to the flat area above the arm.  As part of his employment contract he is allowed to take one group on the tour at no cost (it’s normally $125 per person).  He invited us and two other couples to join him and Joan for a trip up the monument on Sunday afternoon. 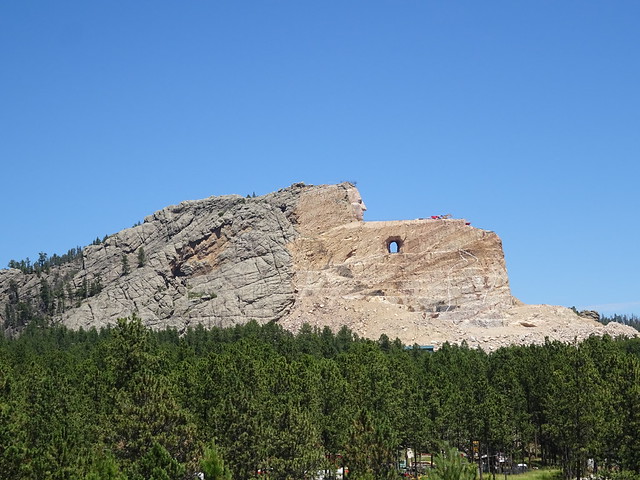 The monument from a distance of one mile

The memorial consists of the mountain carving (monument), the Indian Museum of North America, and the Native American Cultural Center.  We arrived at the memorial about an hour before the tour to allow time to revisit the museum and cultural center. 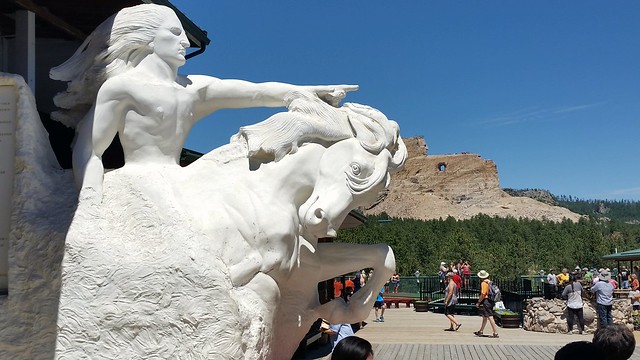 A sculpture of the finished monument with the mountain behind it

The size of the monument is difficult to comprehend.  Just the head of Crazy Horse is 87 feet high; by comparison, the heads of the four U.S. Presidents at Mount Rushmore are each 60 feet. 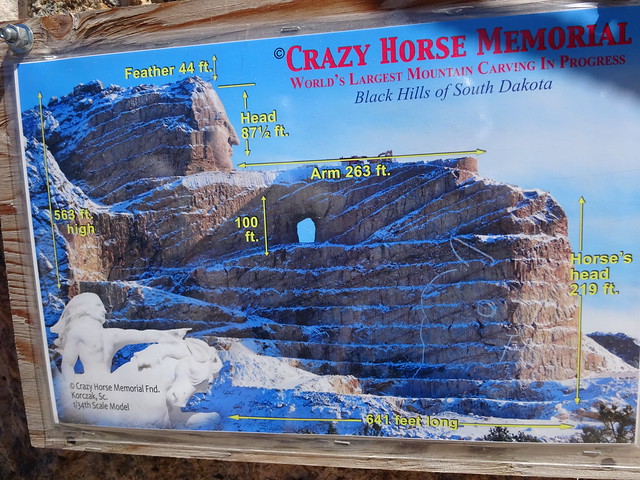 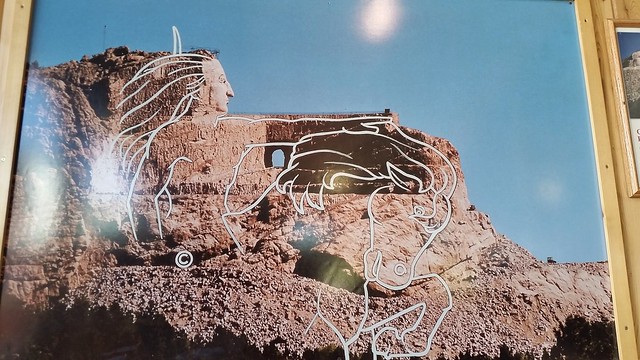 We met our group in the lobby of the visitor center at the designated time and soon boarded the van for the drive up the mountain. 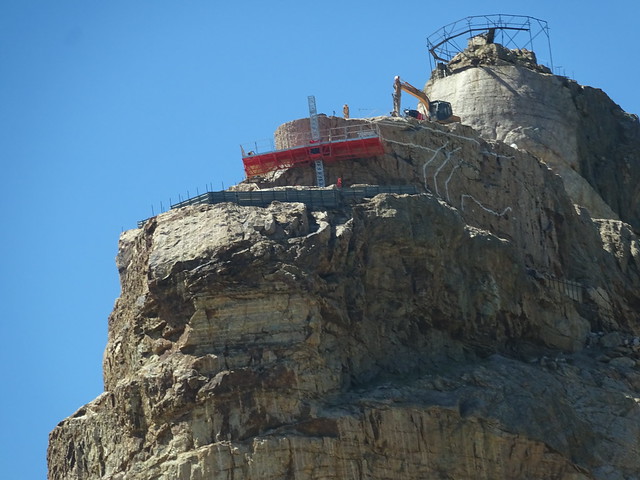 During the week there are no tours up to the top before 4:30 pm as the area is an active construction zone.  But since it was Sunday, we were able to go up in mid-afternoon.  When we arrive at the top our guide, Tom, used a pictorial display to explain some things to us. 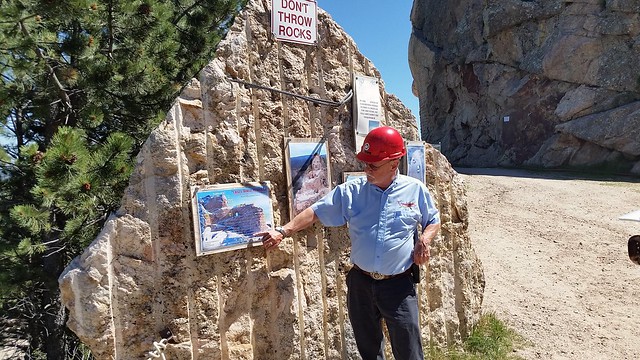 After that we headed out on to the top of the arm. 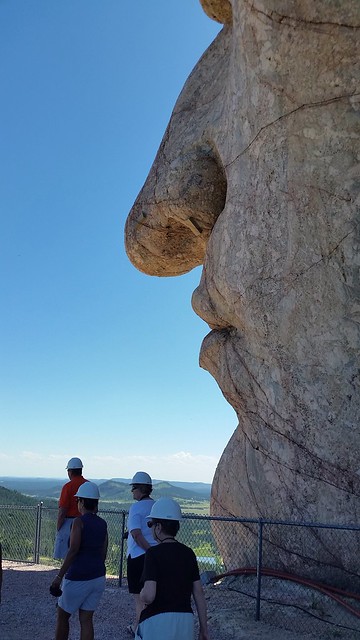 As we moved out on to the arm the view back down at the visitor center was fantastic! 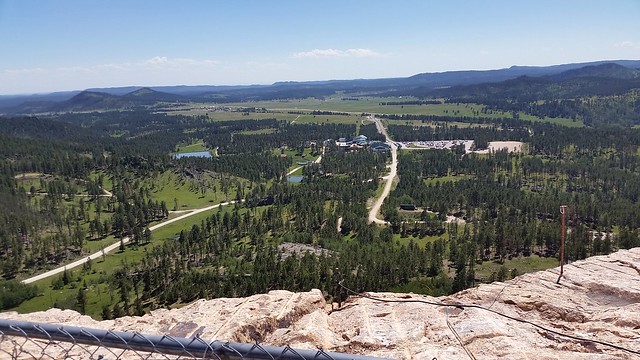 We did not look behind us until we were about half way out on the arm.  When we turned around the face of Crazy Horse towered over us. 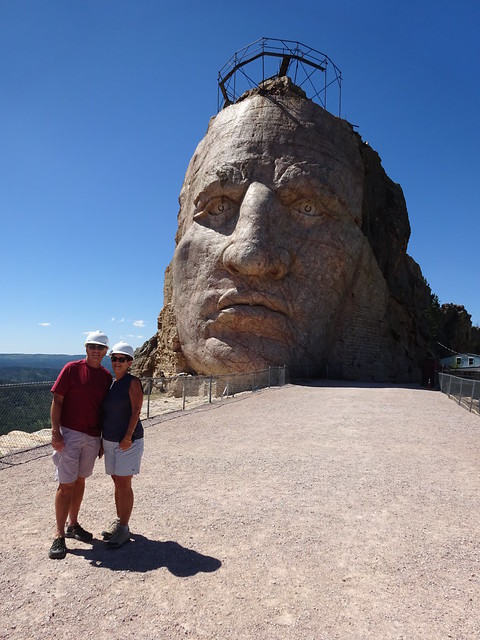 Think it looks big from here? 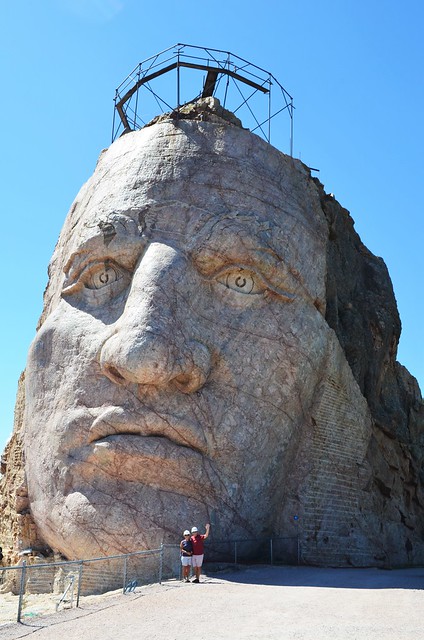 How about from here? 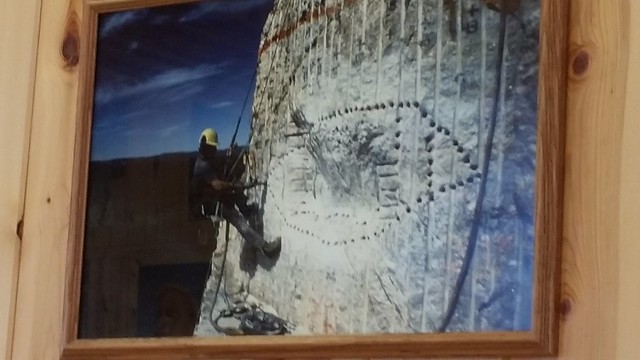 Photo depicting the beginning of construction on the eye 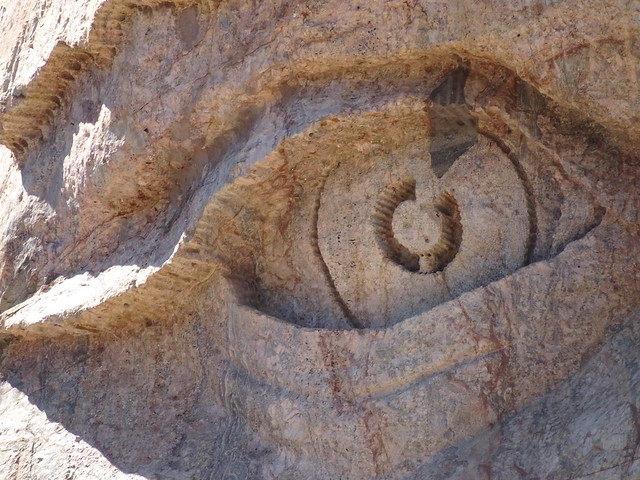 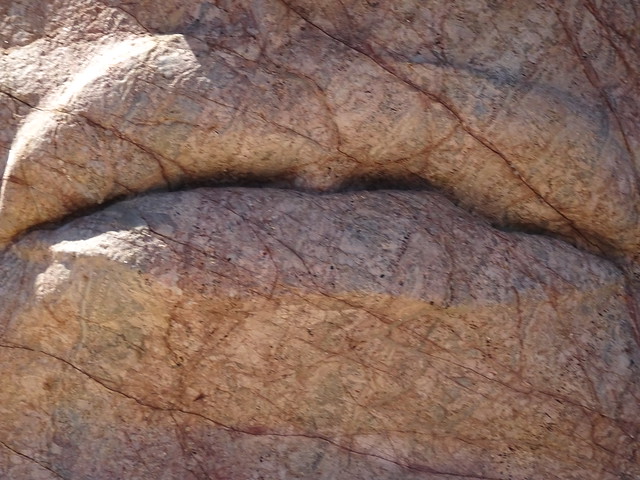 Detail in the lips (notice the cleft on the upper lift) 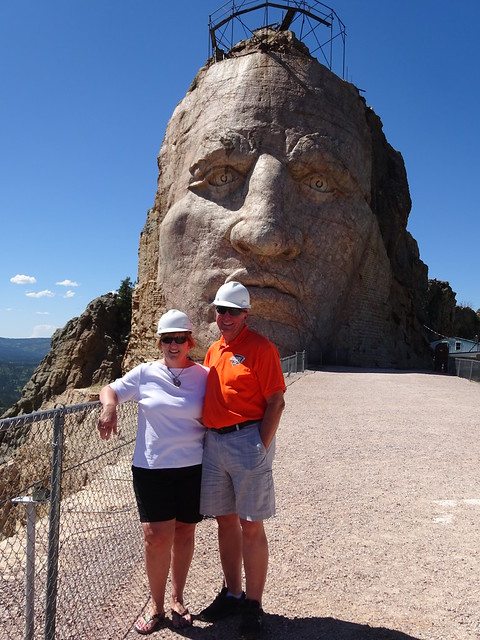 Our hosts, Joan and Steve 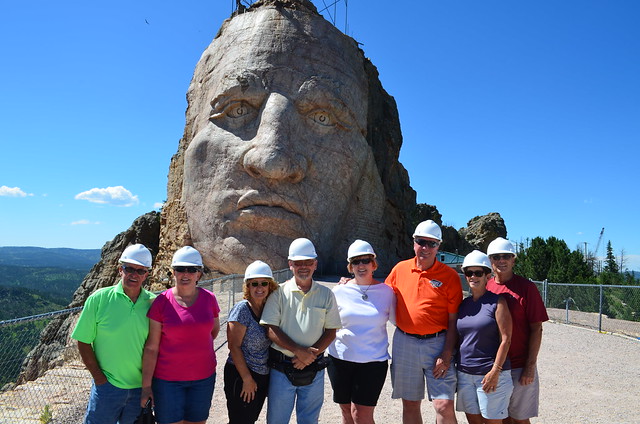 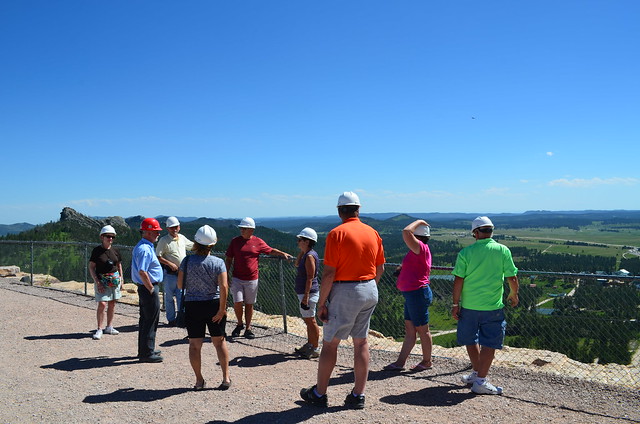 Insightful comments from our guide, Tom

After our wonderful tour we adjourned to a nearby establishment to enjoy a cold drink and discuss our experience. 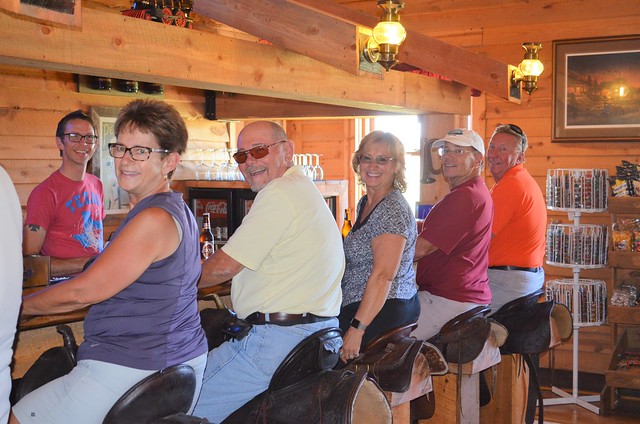 We have visited Crazy Horse twice in the past but never had an experience like we had this time.  The trip up to the top was wonderful and Steve and Joan shared a wealth of information they have learned from their time working at the memorial.  Thank you, Steve and Joan, for a great day!