On Friday we left Keyhole State Park in eastern Wyoming and drove east on I-90 into South Dakota for a visit to the Black Hills.  We’ve been here a couple of times but it is the first time the motorhome has been in South Dakota.  We were surprised when it showed no emotion as we crossed the state line! 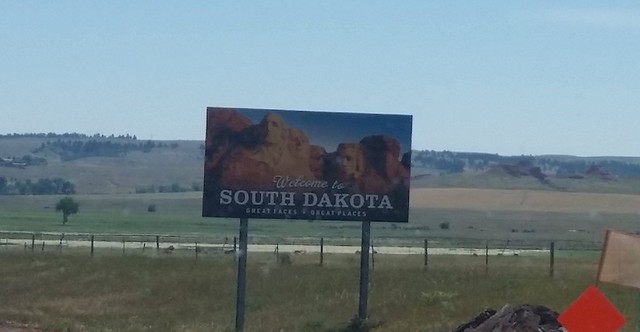 We drove to the little community of Hermosa, on the east side of the Black Hills and about 15 miles south of Rapid City to Southern Hills RV Park.  The park is not very nice but the sites are level, the power is good, the location is good, and the price is right.

That evening we met three other RV couples we have met during our travels at a nearby pizza shop to share stories and enjoy a great meal.  We failed to take any photos of the group but are meeting them on Sunday at the Crazy Horse Monument, so we’ll get some photos then.

Today (Saturday) the temperatures were in the 90s, a bit warm for hiking, so we decided to take a long drive through the Black Hills.  We drove about 10 miles east to the entrance to Custer State Park, paid our $20 entry fee, and headed for what is called the Wildlife Loop Trail, a two lane paved road meandering through the rolling grasslands of the park.  We drove a few miles before sighting some wildlife, a large buffalo grazing near the road. 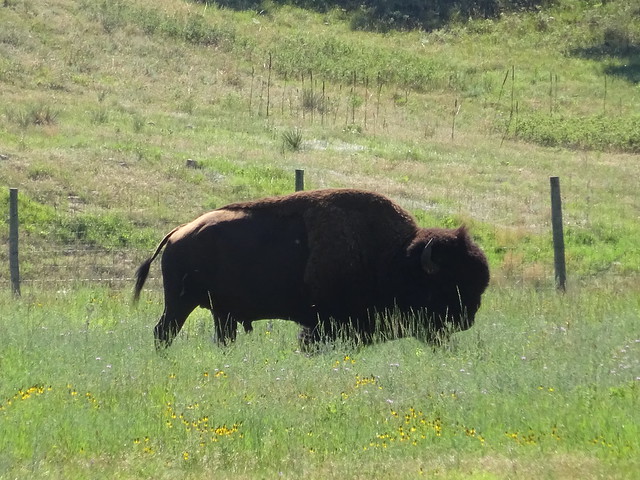 As we approached, the big guy decided to take a stroll down the road in front of us, so we sat awhile as he slowly made his way across a small bridge. 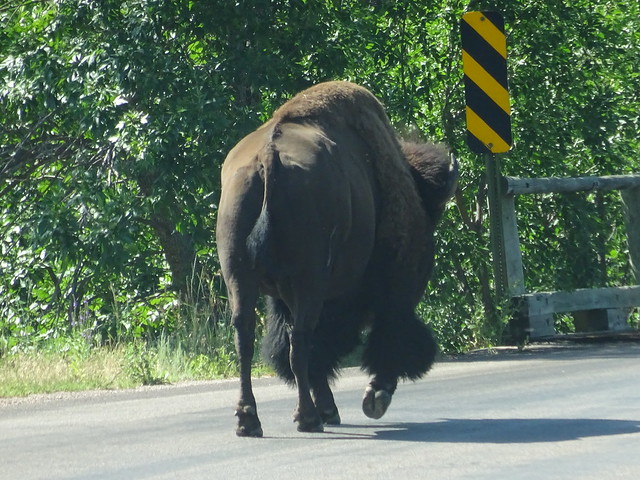 Finally he turned and headed into the field next to the road. 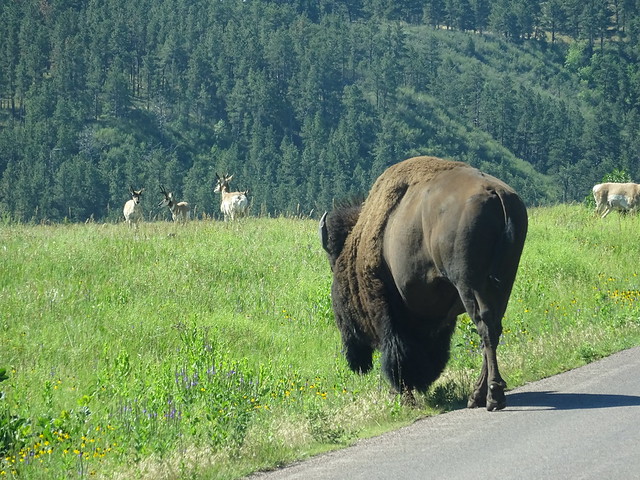 He must have had an itch on his back as he suddenly flopped over and began rolling in the dirt. 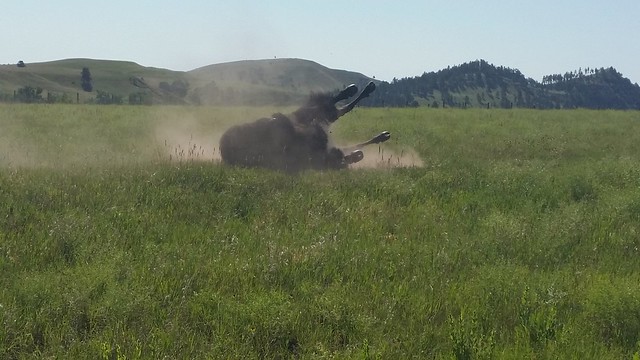 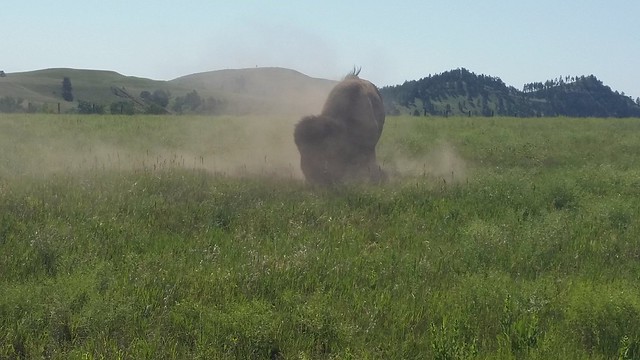 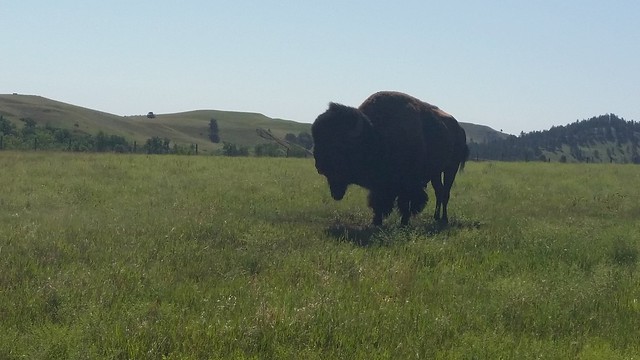 Buffalo are herd animals, so we knew this guy’s buddies must be somewhere nearby.  About a mile further along we found them.  It seems that they decided the vast grassy fields were not as inviting as the road.  So the herd decided to take up residence on both sides of the road and walk slowly back and forth, blocking traffic. 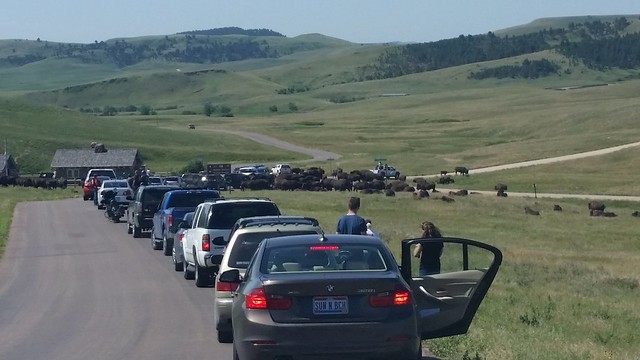 It appeared they had a plan to keep blocking the road, as a couple of the larger buffalo would take turns walking out to the middle and just stand there. 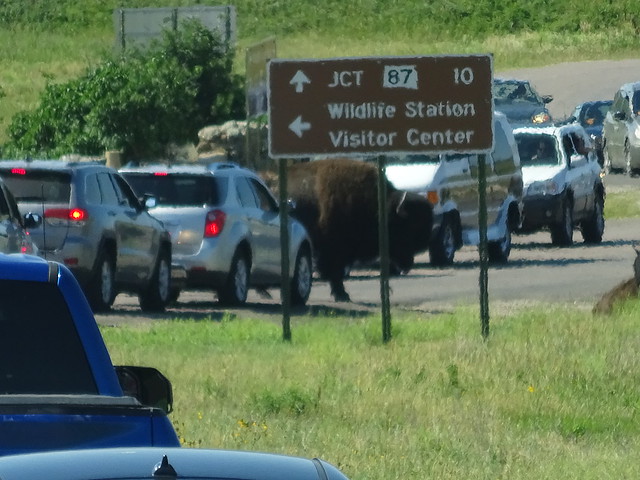 Cars slowly weaved their way through the crowd and finally, 45 minutes later, it was our turn to pass through the gauntlet. 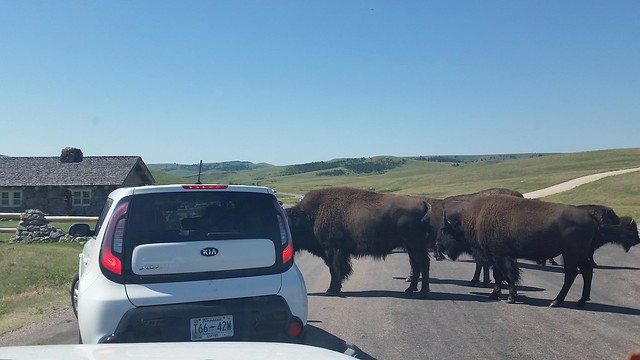 One large bull was assigned to stand in the road and stare at each passing car. 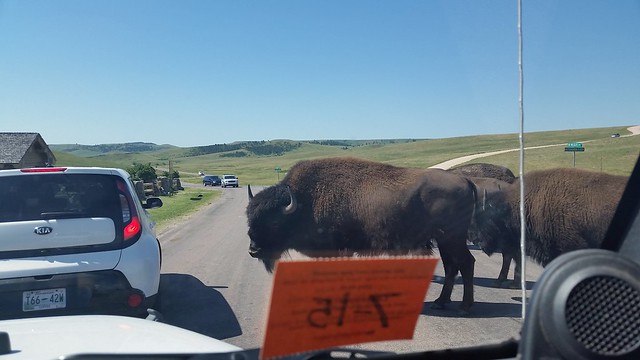 As we slowly passed by he continued to give us the “evil eye.” 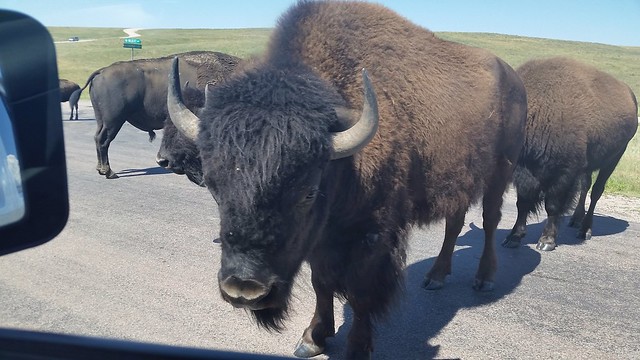 A few miles past the buffalo jam we passed a small herd of wild burros. 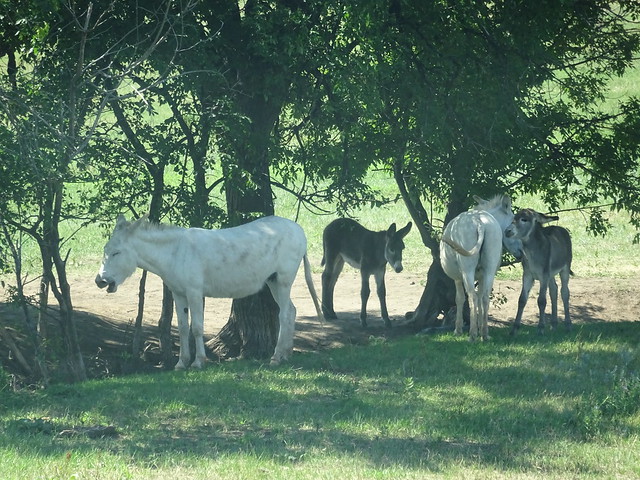 A nearby parking area provided a nice spot for the burros to receive a snack from the many tourists who aren’t suppose to be feeding them. 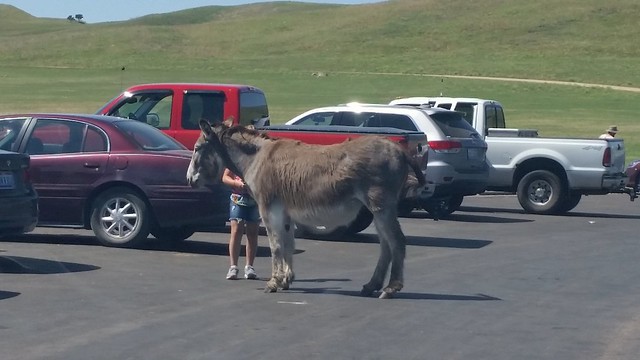 We continued along the loop, passing a cow and her calf walking along the road near another large herd of buffalo. 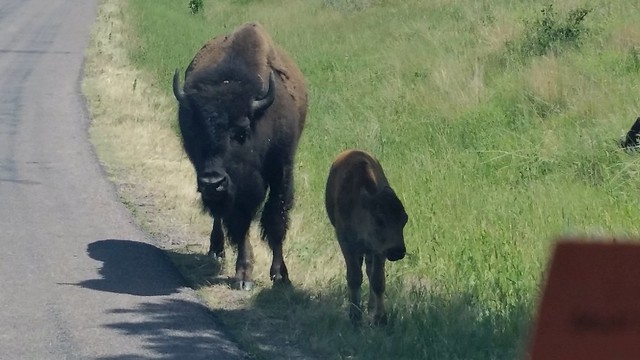 After completing the 13 mile long loop road we drove a short distance up Rte. 87 for a visit to the Mount Coolidge Lookout and Fire Tower.  The tower was one of the last projects completed by the Civilian Conservation Corps in the late 1930s.  Built of local stone, the tower rests atop a 6,023′ peak and is still used today as a fire lookout and dispatch center. As the highest point in central Custer State Park, it offers breathtaking 360-degree views from the top of the fire tower. 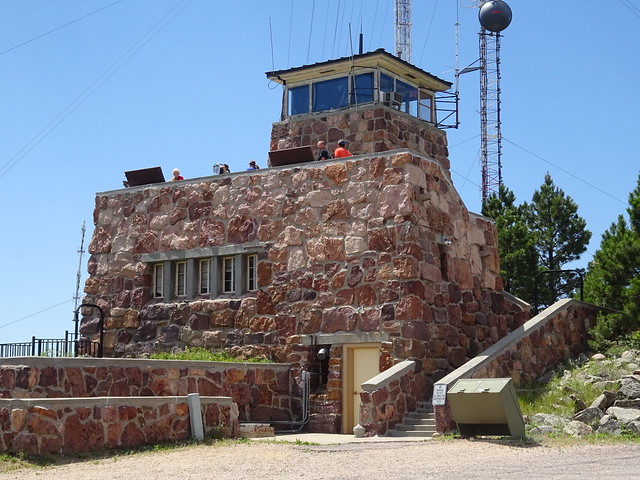 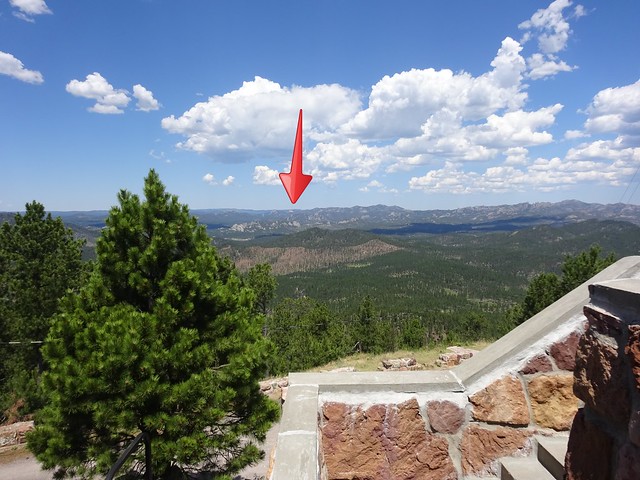 Looking east, see the white area below the arrow? 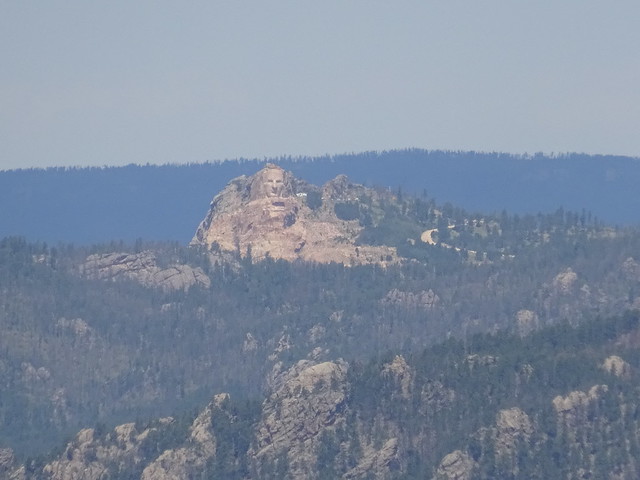 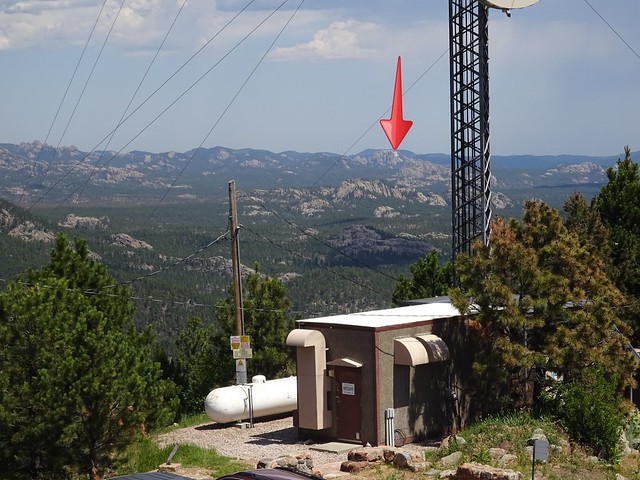 Looking north, see the white area under the arrow? 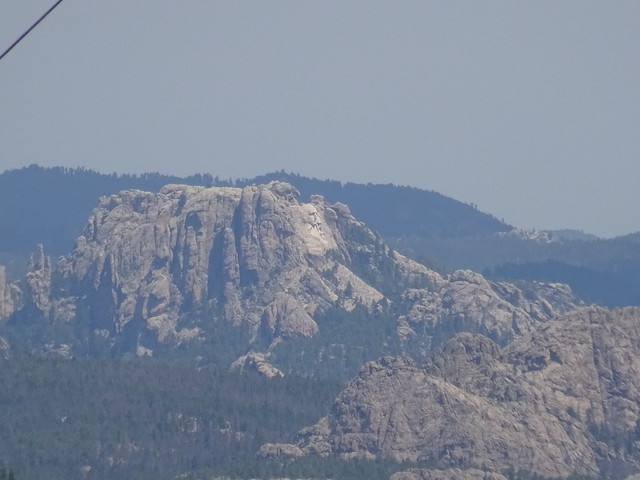 We left the tower and continued north on Rte. 87.  After splitting from US 16A, the route is known as the Needles Highway.  This 14 mile long segment was finished in 1922 and is named after the high granite “needles” it winds among. 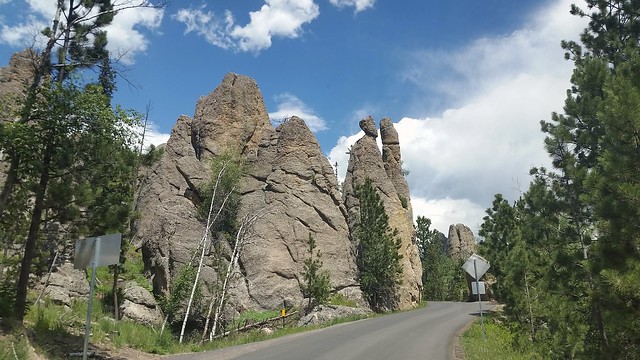 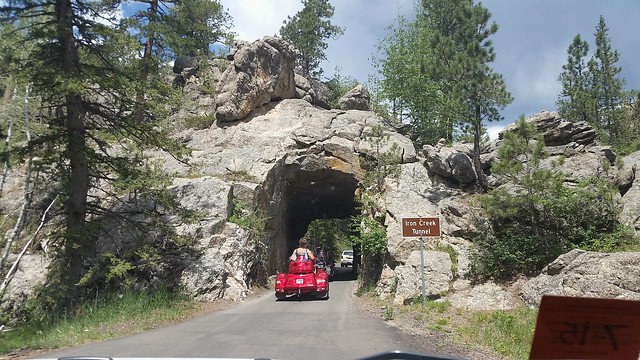 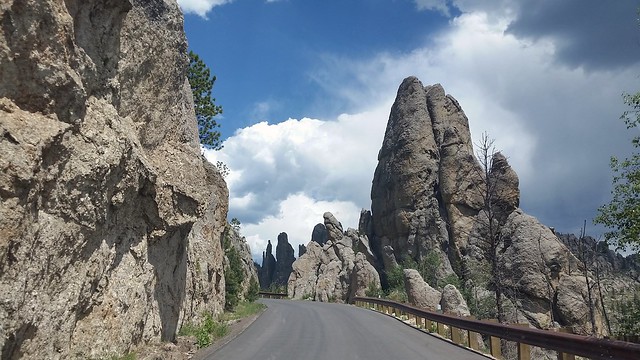 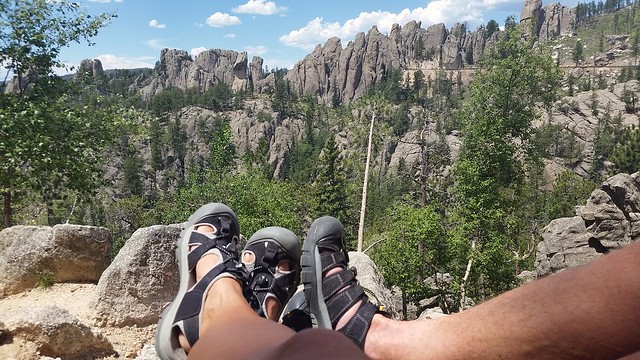 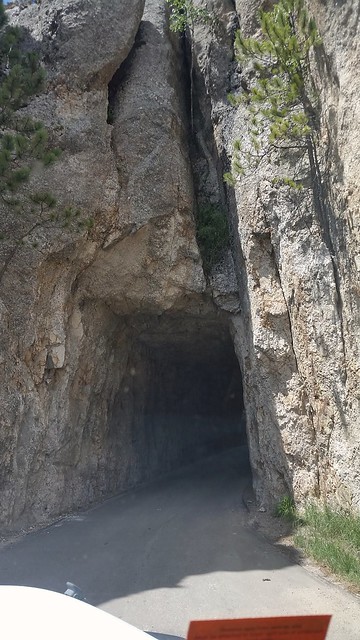 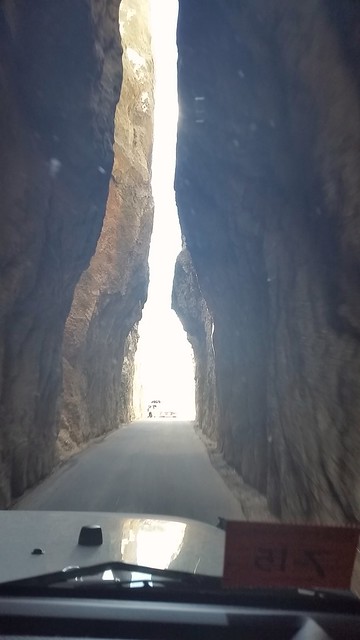 Inside the Needles Eye Tunnel

Leaving the Needles Highway we made a loop to the east on Rte. 244, which goes right by Mount Rushmore National Monument.  As we approached the monument from the west there is a cut in the rock where you can see the face of George Washington. 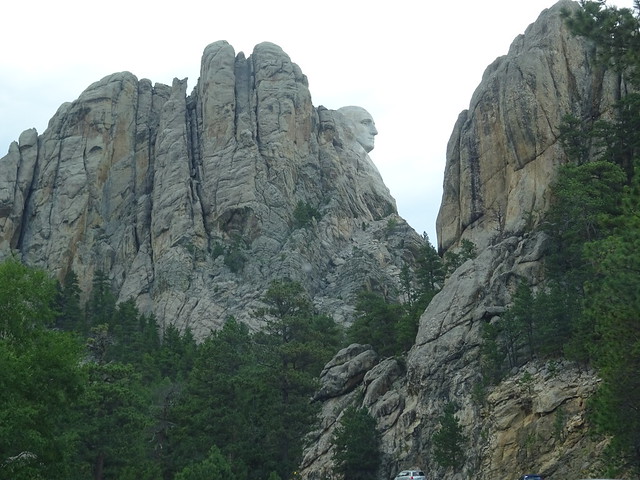 We continued around a bend and drove right in front of the monument. 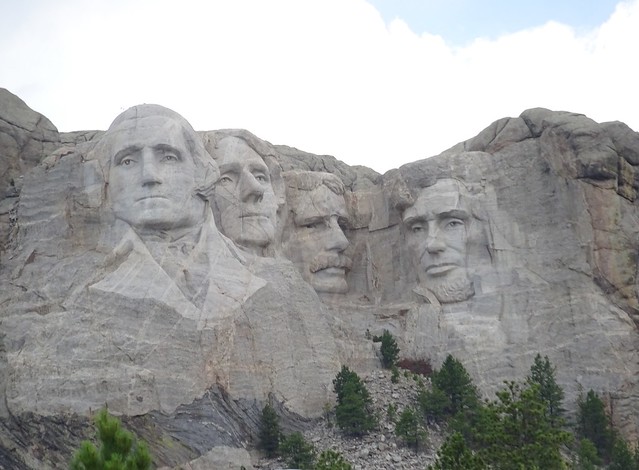 While the faces in the stone are quite impressive, the site holds no historical significance and none of the four Presidents depicted ever visited the area.  But we are looking forward to tomorrow when we visit a monument to a leader who did spend time in the area, the Crazy Horse Monument.

21 Responses to A Drive Through Custer State Park – South Dakota