A Museum, a Park, and a Couple Hikes

The last few days have been busy ones here in Buffalo.  One day the temperatures were up in the nineties, so we spent the afternoon touring the Jim Gatchell Museum in Buffalo. 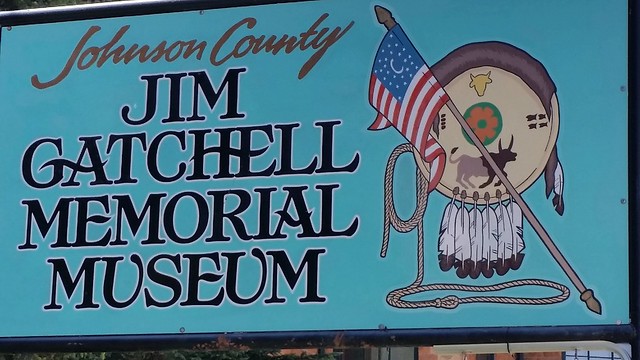 Jim Gatchell opened a drugstore on Main Street in Buffalo in 1900. The Buffalo Pharmacy was a stopping place for cowboys, lawmen, settlers, cattle barons, and famous army scouts. As a trusted friend of the region’s Native Americans, he received many gifts representing the culture including guns, war bonnets, tools, medicine bags, bows, arrows, and clothing. Soon local residents were donating mementos of Johnson County’s historic names, places, and events.  After Gatchell’s death in 1954, his family generously donated his collection to the people of Johnson County with the provision that a museum be built to house it.

Today the museum is made up of three connected buildings.  The main section is in an old Carnegie Library building.  It is one of the 1,679 libraries philanthropist Andrew Carnegie built across the United States between 1886 and 1919 and was added to the National Register of Historic Places in 1976.  Due to the requirements of the National Register, when the building was added to the museum, the Johnson County Library sign was retained. 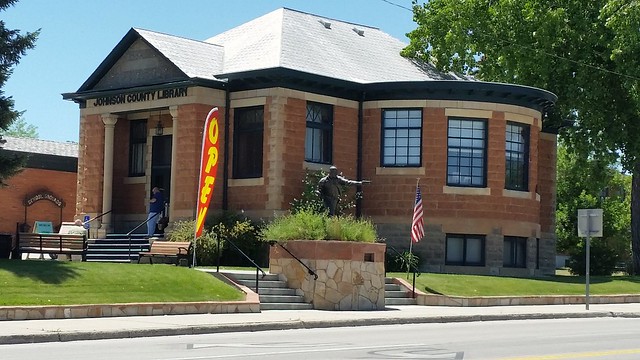 The museum asks that no photographs be taken out of respect for families who have donated some items, but we did take a couple of photos that did not seem to be disrespectful.   One item of interest is a crushed bugle found on the nearby Fetterman Battlefield.  In 1868 80 soldiers were lured into a trap by Indians and all were killed.  The bodies of the soldiers were mutilated except that of the bugler, Adolph Metzger, whose corpse was covered with a buffalo robe, believed to be a sign of respect for his courage. Mutilating the bodies of their dead foes was an Indian custom ensuring, according to their religion, that their enemies were unable to enjoy the physical pleasures of an afterlife. 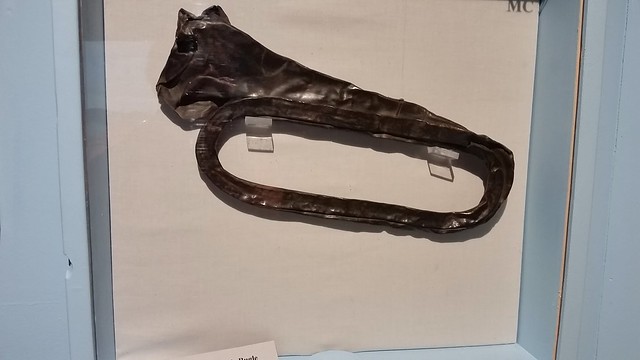 We also took a picture of a diorama depicting the Wagon Box Fight, which took place almost a year after the Fetterman Battle.  If interested in these two conflicts, check out our blog from a visit we made to the sites a couple of weeks ago (click here). 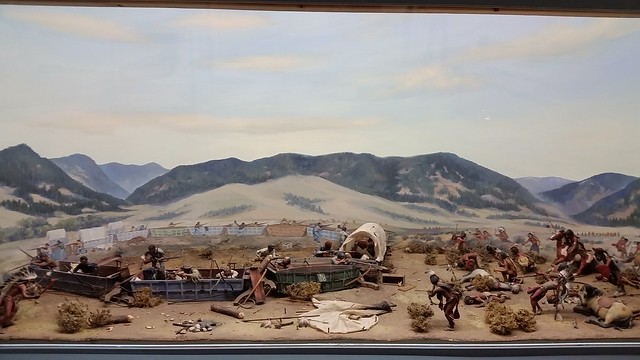 The next day we drove about ten miles northwest of town for a hike up to Firebox Park.  The trail begins near the Bud Love Wildlife Game Preserve and goes up a canyon following Sayles Creek. 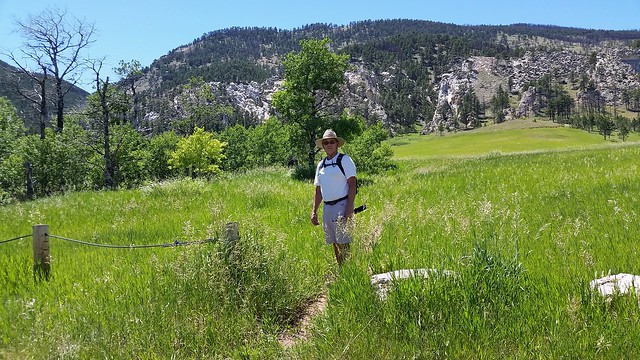 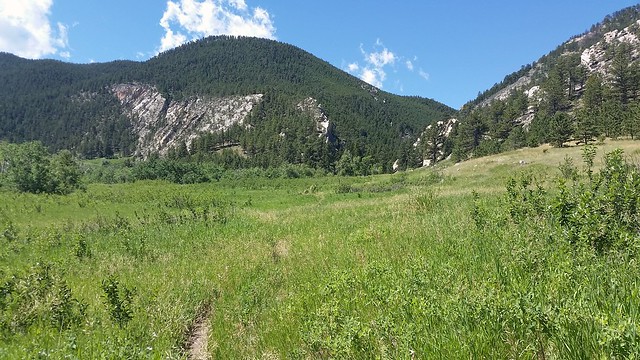 Heading toward the canyon (the “V” in the hills)

The trail crosses the creek three times before heading steeply up the canyon. 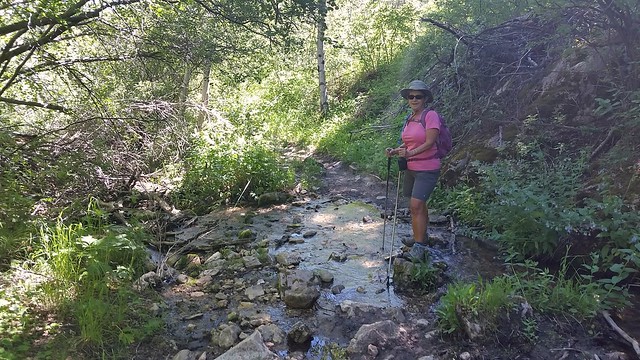 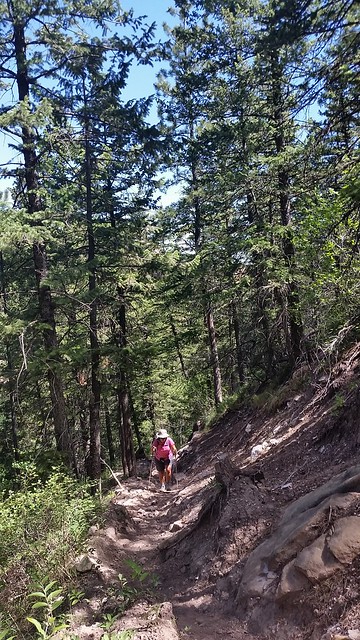 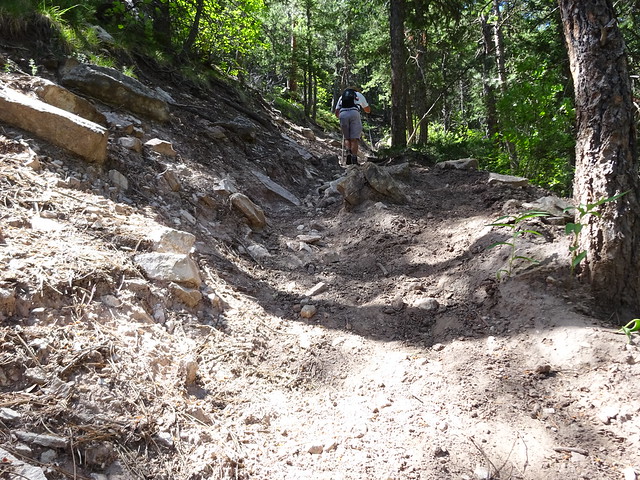 As we continued up the steep path the plains to the east came into view. 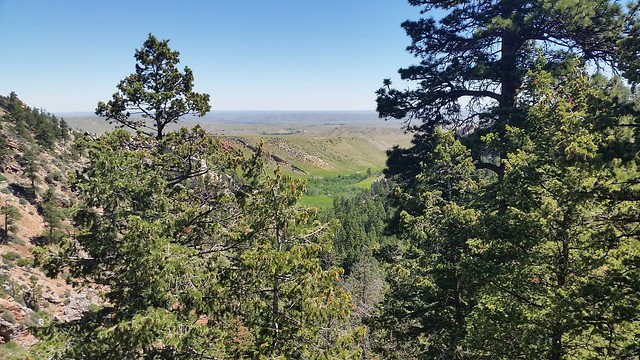 After hiking up through the canyon we came to a wide open meadow.  Continuing across the meadow, through another section of forest, and up into a second meadow we came to a crest above Firebox Park. 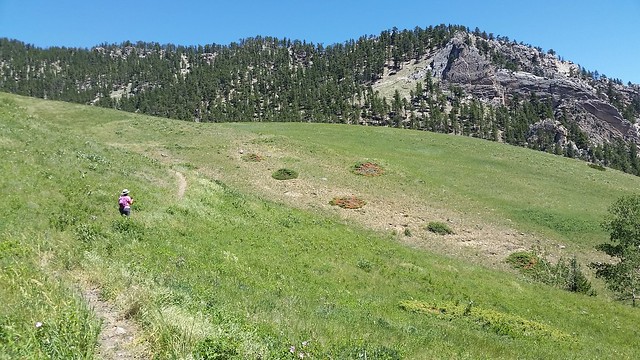 At the crest we sat on some rocks to enjoy lunch before returning back down the trail. 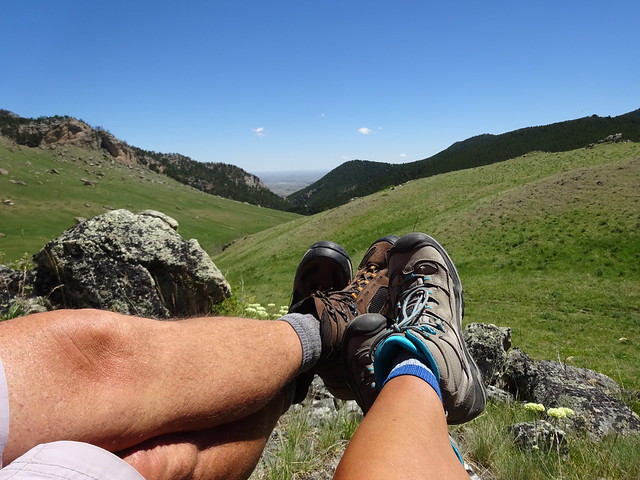 Lunch with a View 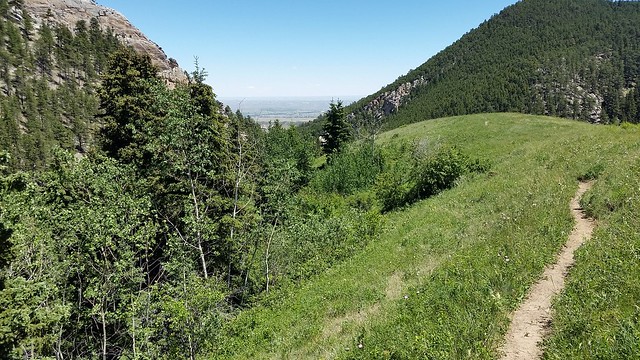 The view to the east as we hiked back down

On Sunday we drove north to the city of Sheridan to visit two city parks, Whitney Commons and Kendrick Park.  Whitney Commons is a small park just off the main shopping area.  It is supported by funds from Whitney Benefits, a foundation established in 1927 to manage funds from the estate of Edwin Whitney, a founding father of the city of Sheridan.  The park is home to a number of interesting sculptures. 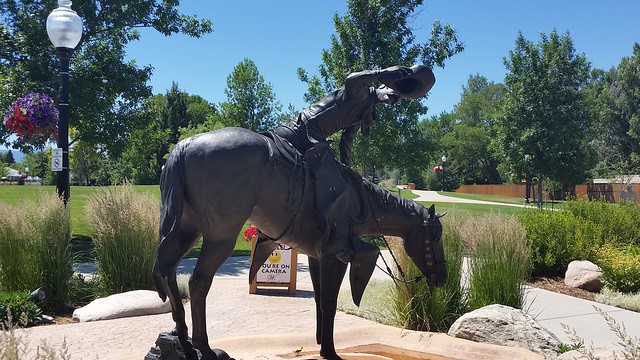 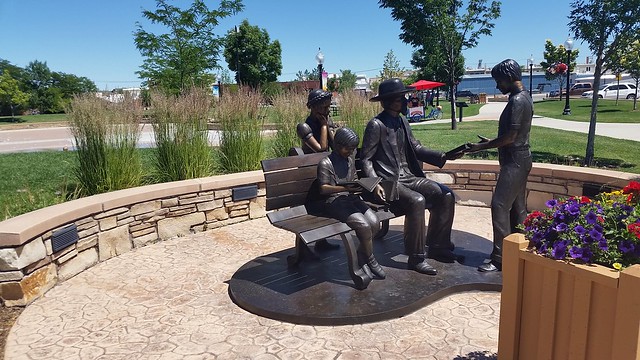 Just a short walk from the Commons is a bridge over Big Goose Creek leading to Kendrick Park.  The park has a number of interesting wood carvings made from tree stumps. 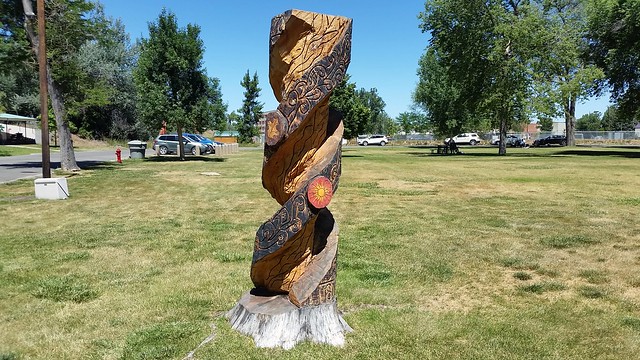 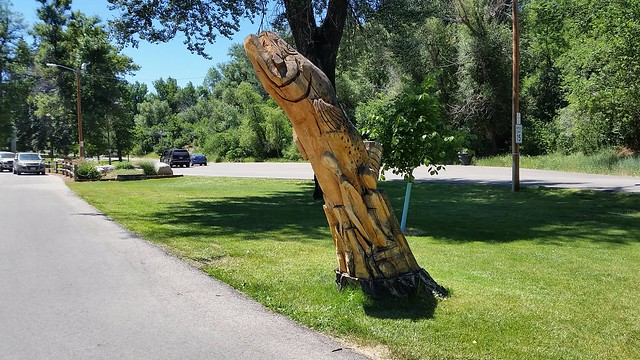 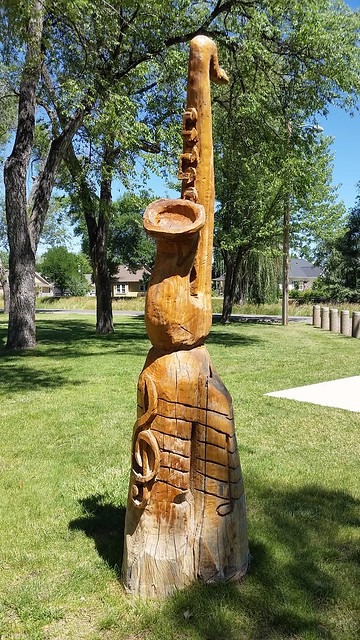 One of the carvings is right next to an ice cream stand. 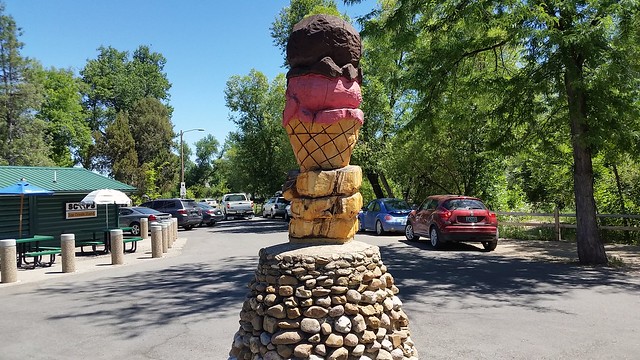 Today (Monday) we drove up into the Bighorn Mountains for a visit to the Elgin Park Trailhead.  The area has a number of great boondocking locations (free – 14 day limit) and is a popular place for horseback riding, 4-wheeling, and hiking. 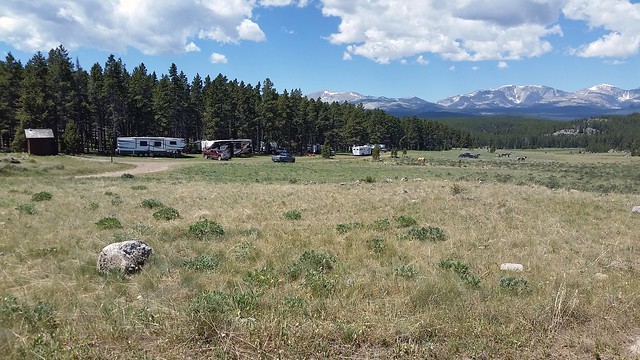 We hiked down a 4-wheeler trail for about 2.5 miles, stopped for lunch while enjoying a view of the mountains, and returned. 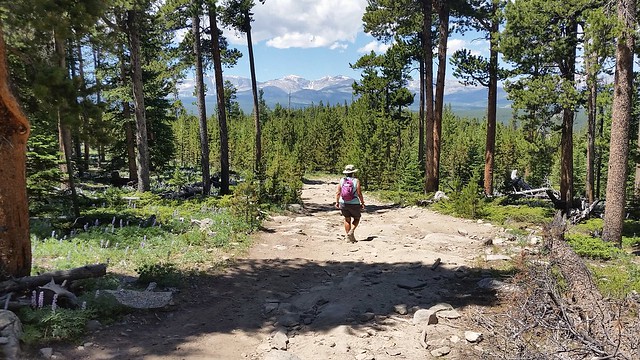 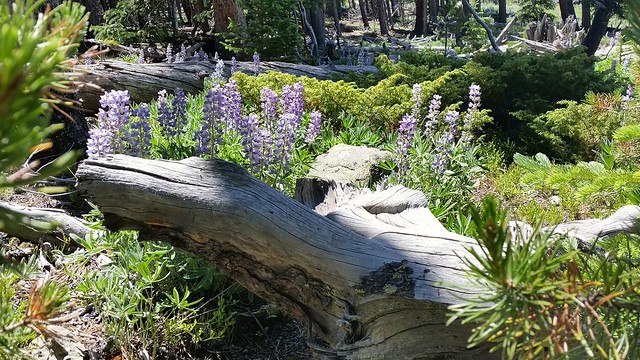 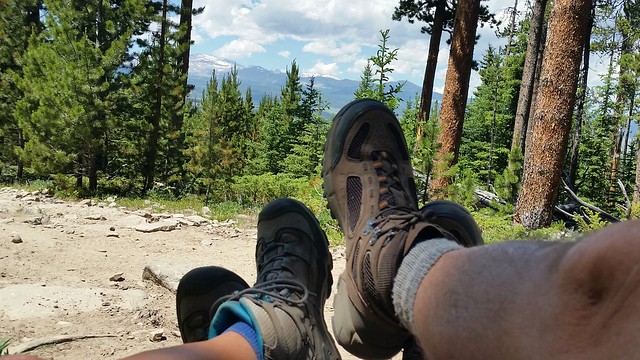 Returning to Buffalo we stopped at a gas station but had a bit of trouble getting around the building to the pumps. 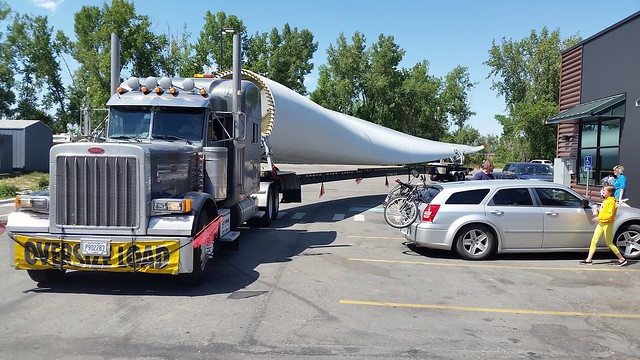 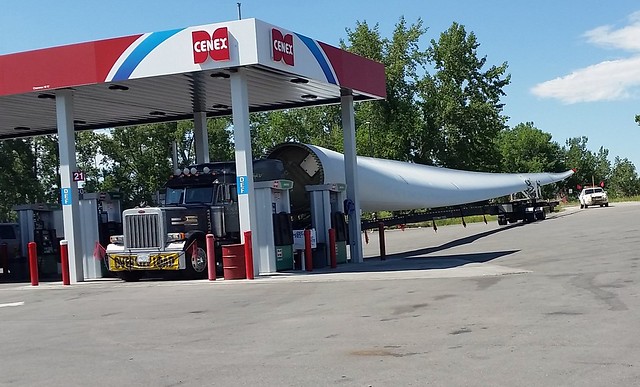 No, it’s a blade for a windmill!

With a week left in Buffalo we still have a few hikes on our agenda.  More on that later . . .

13 Responses to A Museum, a Park, and a Couple Hikes