A Little Biking and a Little Hiking Near Buffalo

One day this week we aired up the tires on the bicycles and headed out to explore the Clear Creek Trail System.  This system of walking and biking trails begins east of town not far from our home in Deer Park RV.  It then runs through town and heads west along Clear Creek toward the mountains. 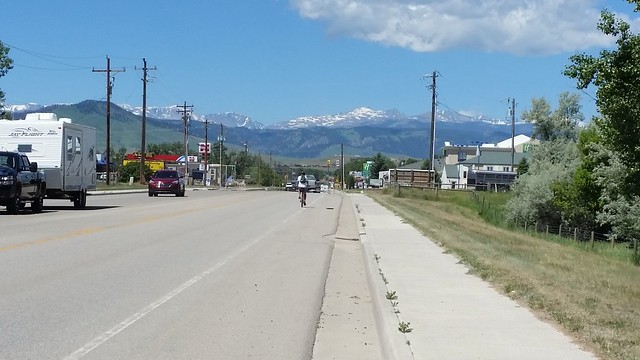 Heading toward the trail system along Hart Street 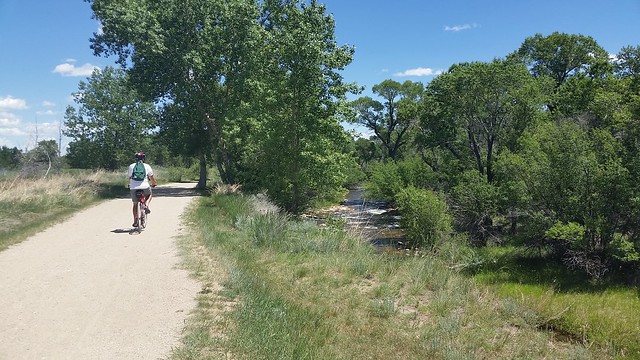 At times you have a great view of Clear Creek while . . . 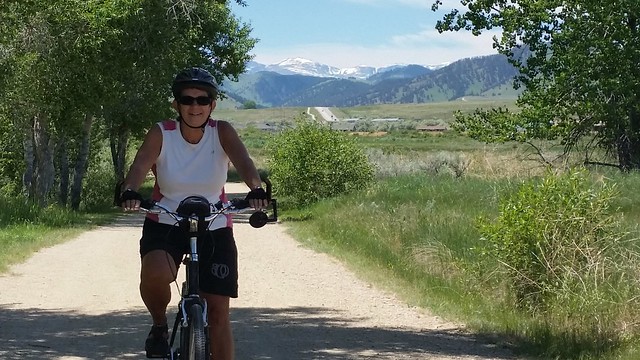 . . . at other times you view the snow covered Bighorn Mountains

For a while the path goes through a cattle grazing field called Veteran’s Home Pasture (it’s on ground owned by the Wyoming Home for Veterans).  Apparently this trail doesn’t see a large volume of bike traffic as they have a little maze section of fence (often found on hiking trails) to go into the pasture section.  It makes things a little difficult for bikers, but we managed to get through. 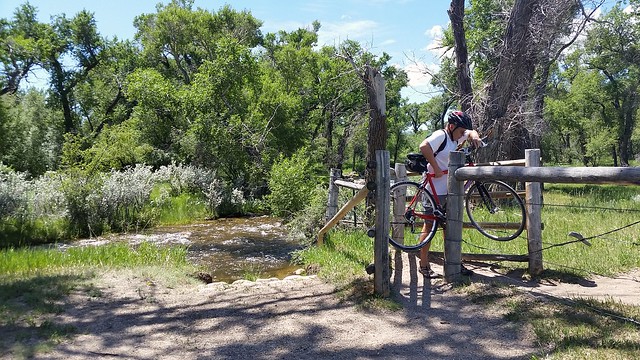 As we made our way back through town we stopped at the Bank of Buffalo to use their ATM and found some cool sculptures by the entrance. 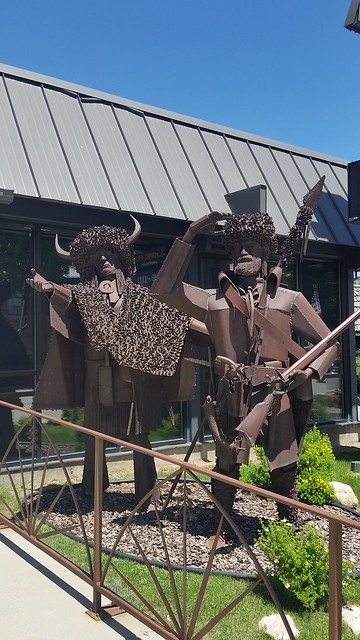 The next day we headed west on US-16 for a little hiking.  Wispy clouds over the mountains created beautiful panorama views as we drove along the highway. 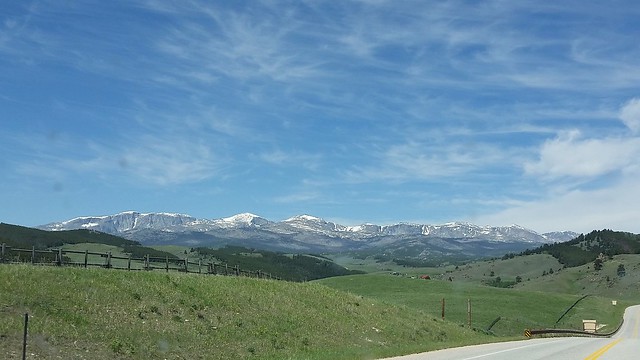 About 15 miles from Buffalo we turned left on to a well-maintained dirt road that lead to our destination, Tie Hack Reservoir. 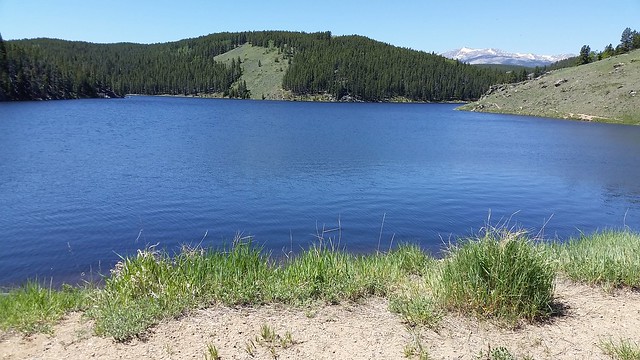 The reservoir is named for the men who worked in the mountains in the late 1800s and early 1900s cutting trees and forming ties for the railroads being constructed throughout the western states.  Equipped with only a saw and an ax, tie hacks would produce an estimated 10 million railroad ties during the construction of the railroads.

The going rate back then was 10 cents a tie, or a maximum of three dollars a day.  The Tie Hack spent winter months in the mountains sawing down the large pines.  Then the axes came into play as they trimmed off the limbs and the bark, forming the tie. Each tie had to be eight feet long and five inches on each side.

The Tie Hack also took part in the transporting of the ties.  Most were sent down creek during the spring snow melt.  There could be tens of thousands of ties on the creek, creating tremendous traffic jams, the original “log jams.”  To avoid these jams the Tie Hack needed to increase the flow of water in the creek so a crude dam was built, the first Tie Hack Dam.  In the spring the dam would be opened, sending more water down the creek.  The remains of the original dam, a dirt levee topped with a wooden wall, still remains a few miles from the reservoir. 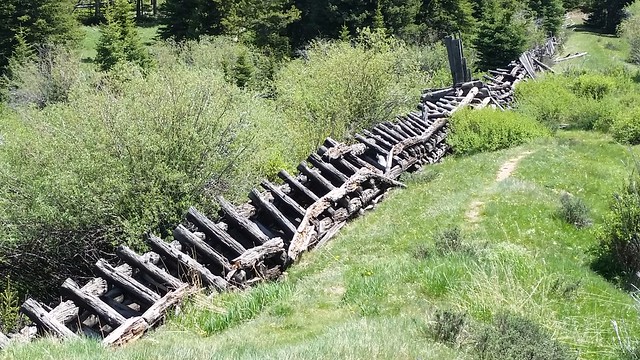 The new dam, built in the mid-1990s, creates a 2,435 acre reservoir that provides municipal water for the town of Buffalo, as well as fishing and recreation opportunities for visitors. 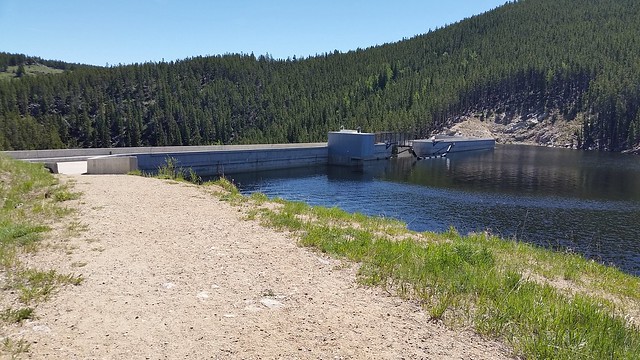 View of the top of the dam 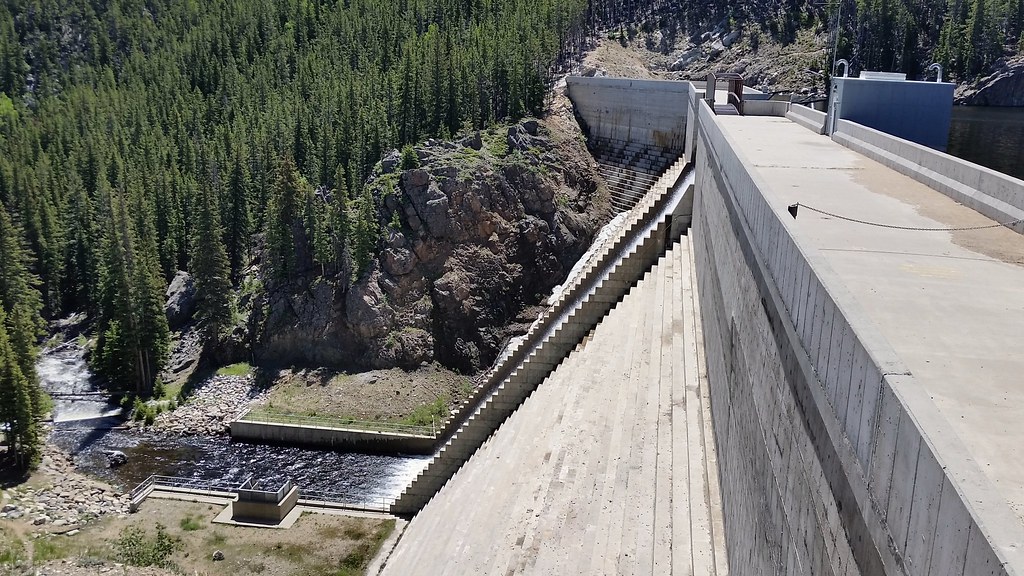 Looking down the other side

We were looking for a trail that follows Clear Creek on the other side of the dam.  To reach it we hiked steeply down a winding path to the base of the dam. 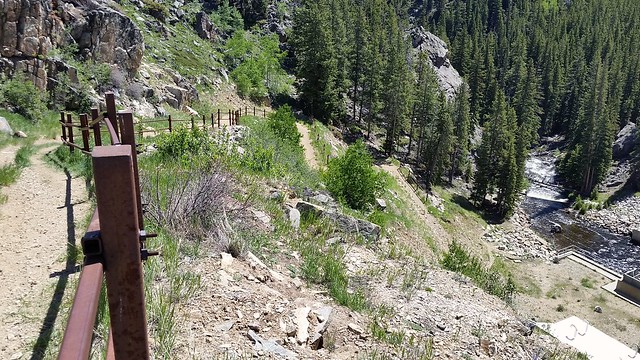 The winding path leading to the base of the dam 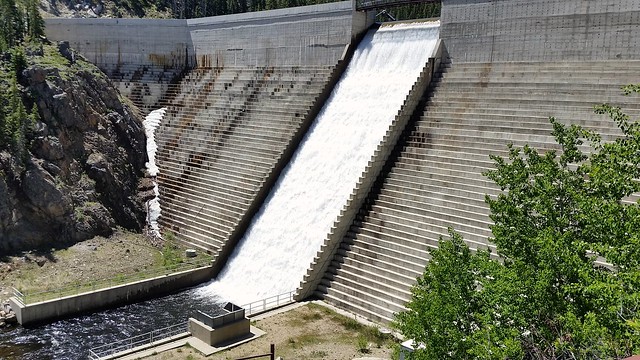 At the base of the dam we located the trail and followed it for a few miles along Clear Creek.  The creek had a strong current, as the spring snow melt was still flowing. 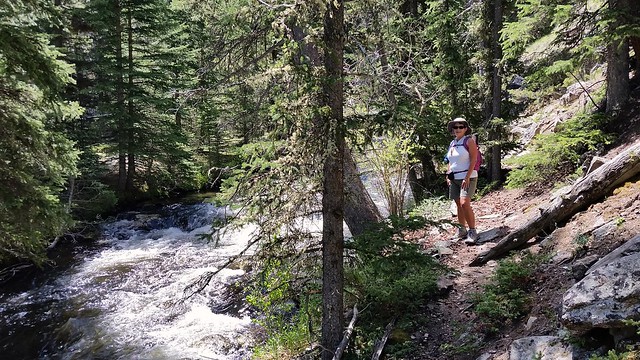 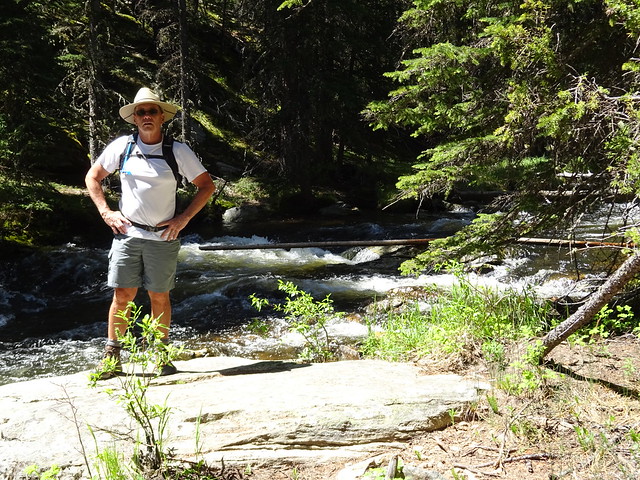 After a bit the trail turned away from the creek and climbed steeply up into a pine forest, then through a meadow filled with wildflowers. 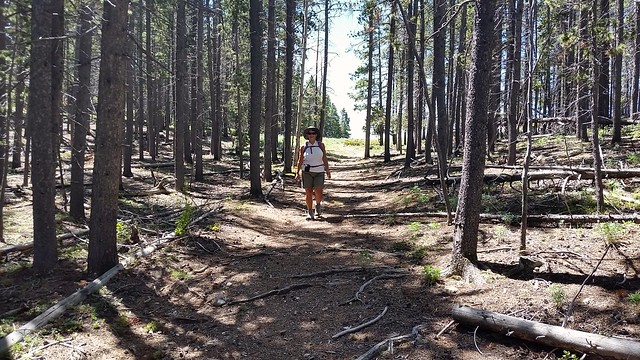 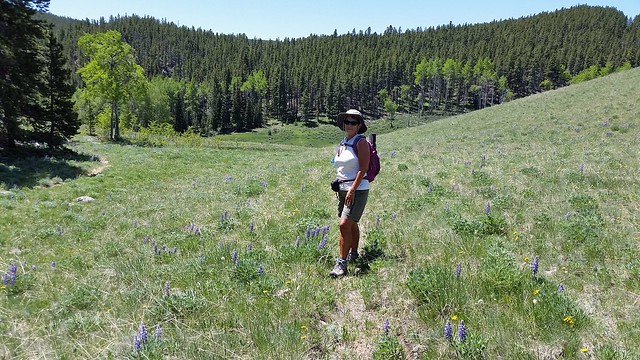 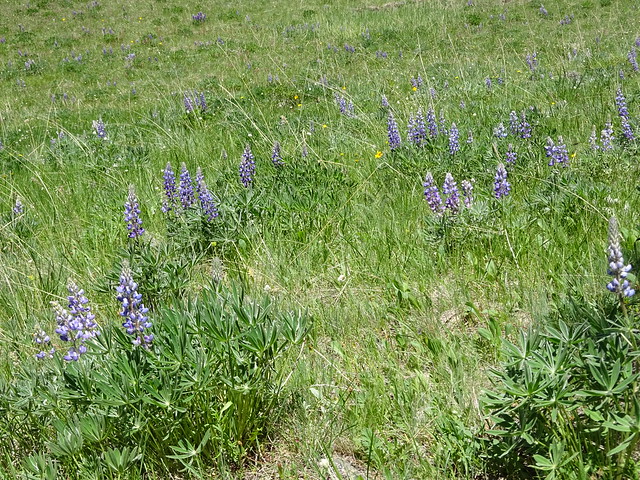 Hiking back along Clear Creek we stopped to enjoy a snack while listening to the sound of the rushing water. 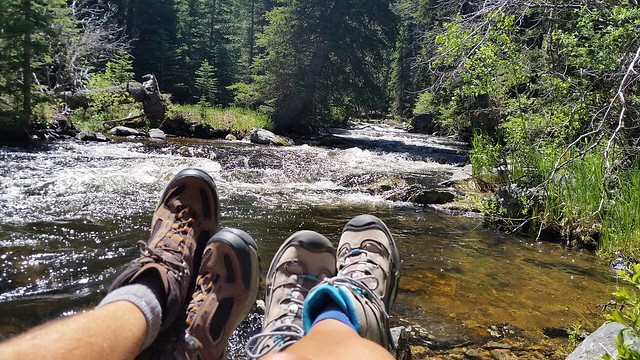 We returned to the dam and crossed it to the other side, where we had spotted a trail running on the wooded hillside next to the reservoir. 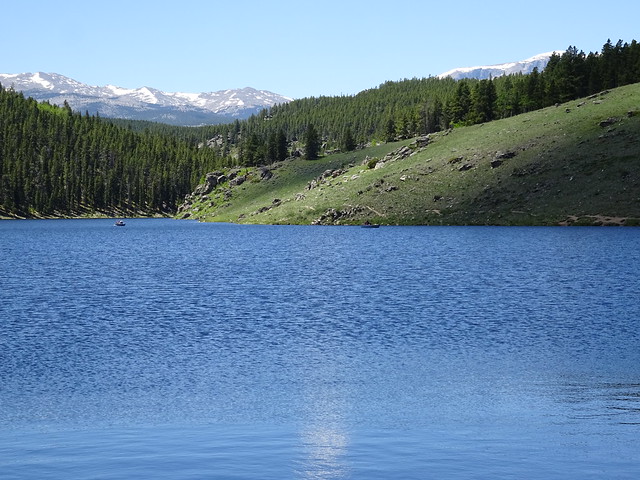 Looking west from the top of Tie Hack Dam 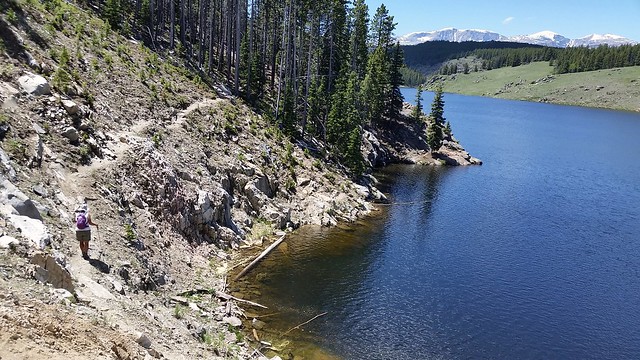 The trail on the other side

A short distance into the woods we found a nice area on top of some rocks where we could sit and enjoy lunch. 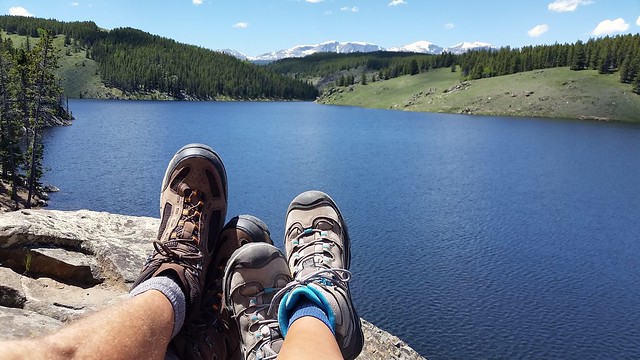 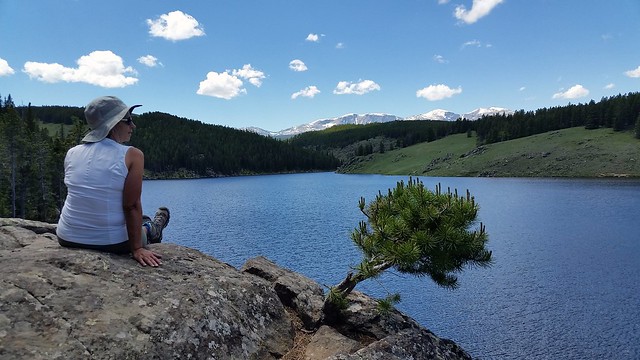 Re-crossing the dam we hiked about a half mile on that side of the reservoir before the trail ended at a large outcropping of rocks. 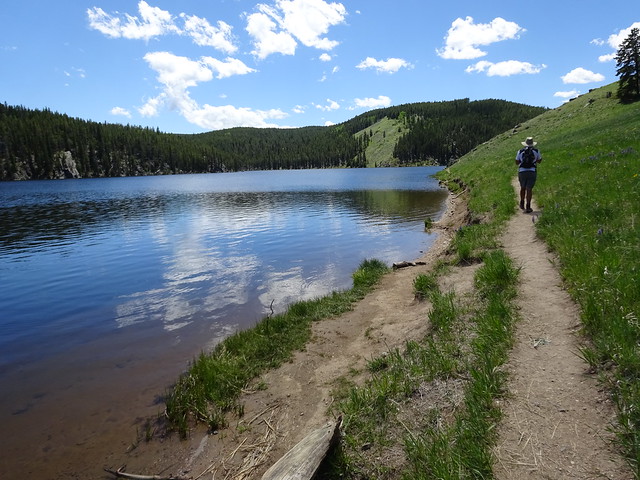 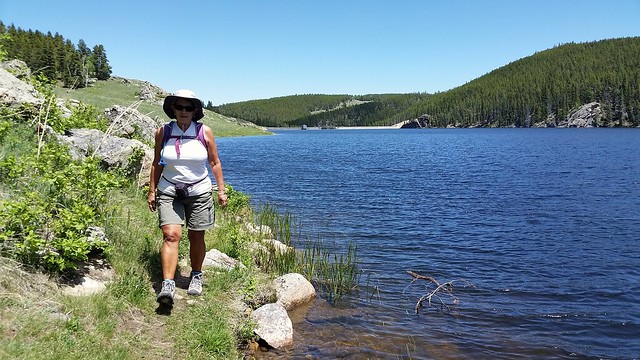 During the drive back to town we took some side roads to explore trailheads for future hikes, making sure the snow was melted at some of the higher spots.  Since it was mid-afternoon we didn’t see much wildlife, just one sentinel keeping an eye on us as we drove by. 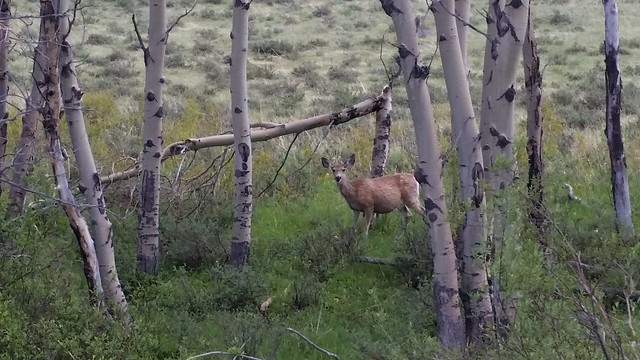 The snow seems to be gone from most of the trailheads so we see some nice hikes in our future.  More on that later . . .