While the natural beauty of the nearby mountains is the most significant feature of the Buffalo area, there is also some significant history in the area.  We spent one afternoon visiting three of the most noteworthy locations.

The Bozeman Trail, an overland route connecting the gold rush territory of Montana to the Oregon Trail, ran right through Buffalo.  The flow of pioneers and settlers, mainly from 1863 to 1868, traveling through territory reserved by treaty for Indian tribes, provoked resentment and caused attacks on the travelers.  The Army established three small forts along the route staffed with troops meant to protect travelers.  One of the forts, Fort Phil Kearney, is located between the present day towns of Buffalo and Sheridan. 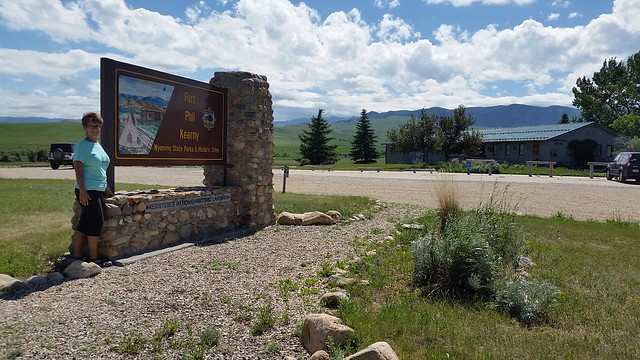 Fort Kearney entrance with the visitor center on the right

After the army failed in its mission to protect the Bozeman Trail, the fort was abandoned in 1868 and was burned to the ground by the Indians.  Today, the fort and the nearby Fetterman and Wagon Box battle sites are maintained by the State of Wyoming as is the Fort Phil Kearny State Historic Site.  Part of the fort has been re-constructed and a nice visitor center is filled with artifacts from the era. 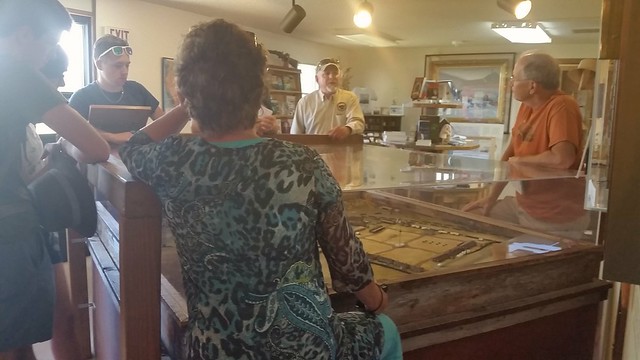 A docent describes historical events using a diorama of the fort

Below is a photo of part of the fort’s wall that has been rebuilt.  The highest peak in the background is Pilot Hill.  The army set up an observation point on the hill, using flag signals to communicate with the fort. 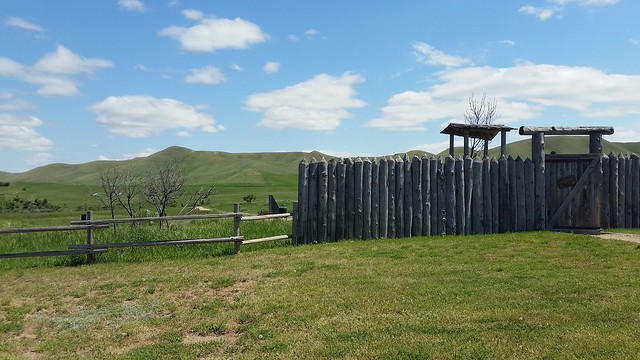 Four miles north of the fort is the Fetterman Battle Site.  In this battle, which took place in December of 1866, all 81 men under the command of Captain William J. Fetterman were killed by an Indian force of considerably more than 1,000 men.  At the time, it was the worst military disaster ever suffered by the U.S. Army on the Great Plains. The battle led to an Indian victory in what is known as Red Cloud’s War, with the U.S. forces withdrawing from the area. 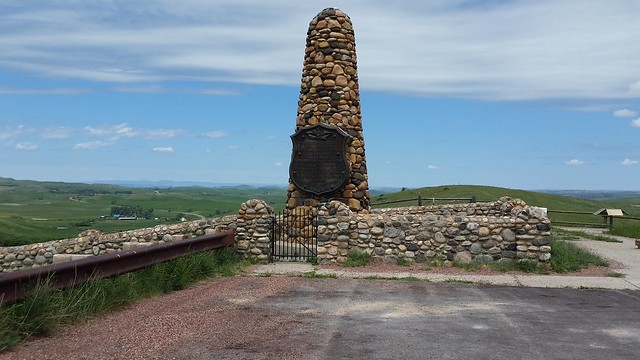 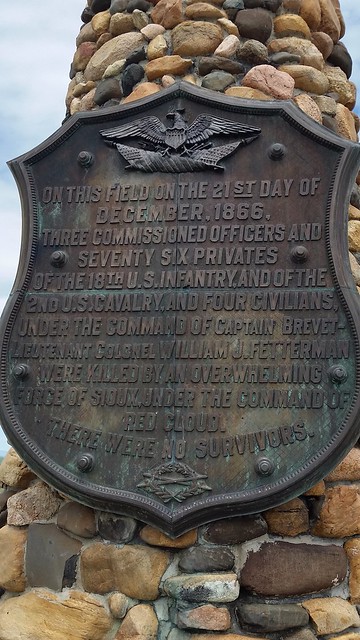 Fetterman’s force was trapped when, in defiance of explicit orders, it was lured onto a hillside by a group of Indians who taunted them.  Once on the hillside they were surrounded by the larger force and destroyed in about 40 minutes.  Today there is a two mile long walking trail with interpretive signs along the path describing segments of the battle. 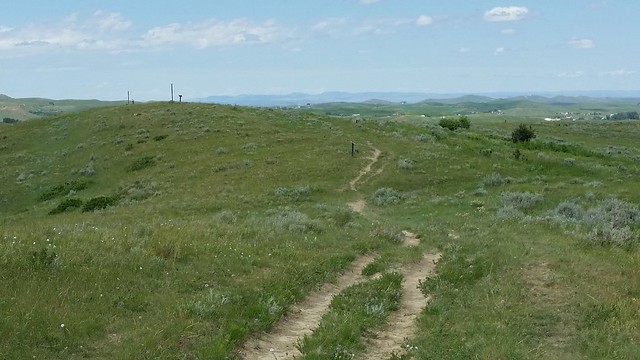 The interpretive path along the battle site

The hillside is part of an open grazing area so you need to watch where you step.  As we hiked the path we had to go around one little lady and her young one who were on guard duty. 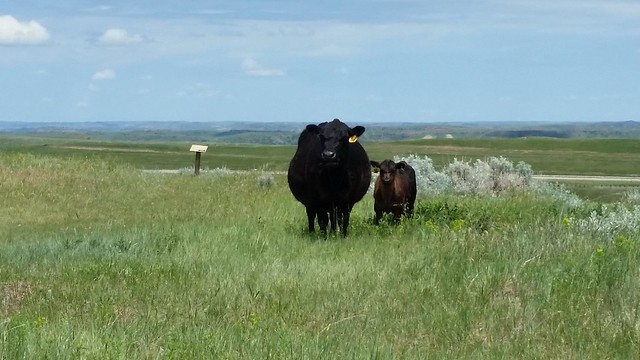 A wide body and her little one

When, just a few moments later, we turned to make our way back, we found the pair had called in reinforcements who seemed to appear out of nowhere. 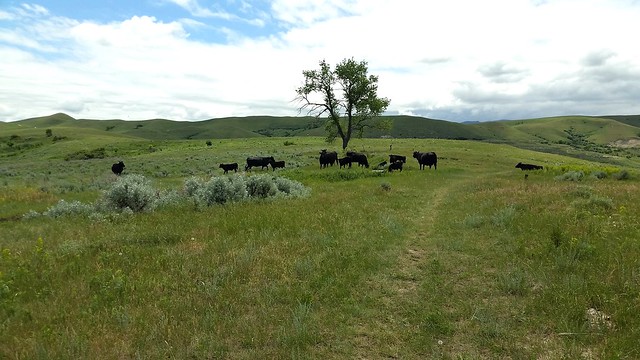 Where did these guys come from? 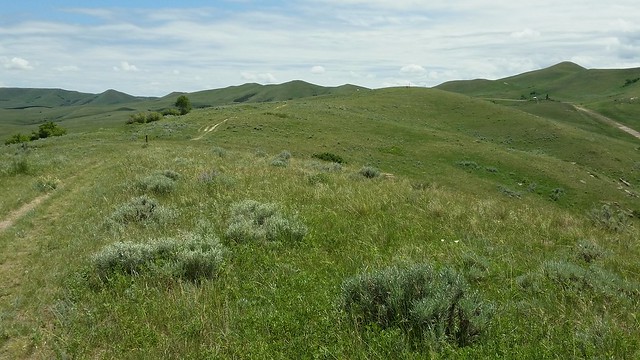 The final stop on our history tour was the site of the Wagon Box Fight.  This fight took place eight months after the Fetterman Battle when a group of Indians attacked a woodcutter site guarded by a small group of soldiers. 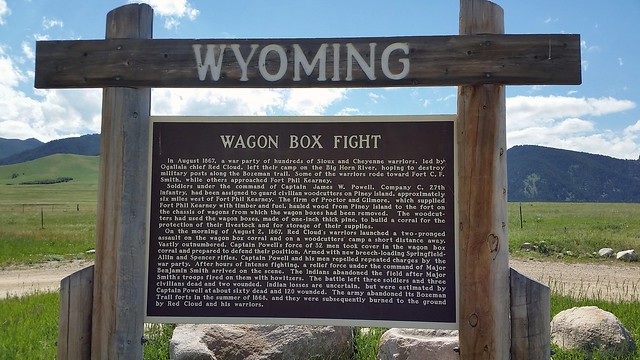 The woodcutters had removed the boxes from their wagons to allow them to haul long logs.  The soldiers used the boxes to create a defensive circle during the attack.

The attack began around 7:30 am and continued until 1:30 pm.  The soldiers had plenty of ammunition and arrows could not penetrate the thick sides of the wagon boxes.  One of the keys to the successful defense mounted by this group was that the soldiers had recently been issued breech-loading rifles.  The troops at the Fetterman Battle used muzzle loading rifles that took more than a minute to re-load and required the soldier to stand up to do it.  Attacking Indians knew of this and counted on the interval to allow them to charge the troops.  The new rifles could fire about three times faster than muzzle-loaders and could be more easily re-loaded from a prone position.  The troops were saved when Fort Kearny learned of the fight from its observation station on Pilot Hill and sent help to the trapped group of soldiers. 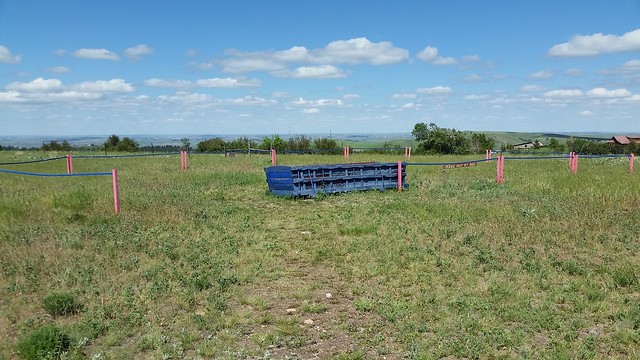 A wagon box and blue fence outlining the defensive circle

After our very enjoyable and informative history tour, we continued north into the city of Sheridan where we were treated to a bit of liquid refreshment at one of those coffee shops that are part of a chain based in Seattle.

19 Responses to A Little History North of Buffalo, WY