A Visit to the Medicine Wheel

One of the things we had on our list to do here in northern Wyoming was a drive into the Bighorn Mountains to visit a site known as the Medicine Wheel.  To get there we drove north on I-25 for about 50 miles before turning west on US-14 at the little town of Ranchester. 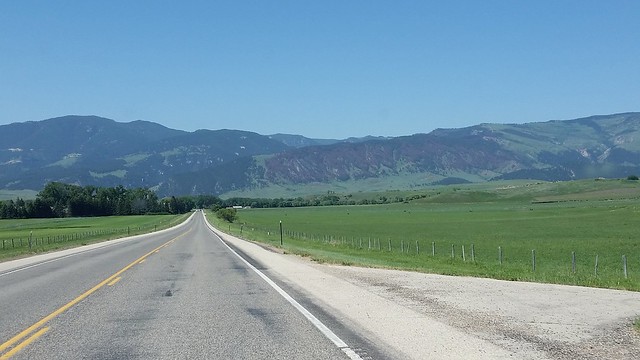 Flat prairie on the way to the mountains

Route 14 winds its way steeply up into the Bighorns until it gets above the treeline.  While the temperature down in Buffalo was in the low 90s up in the mountains it was a cool 70 degrees. 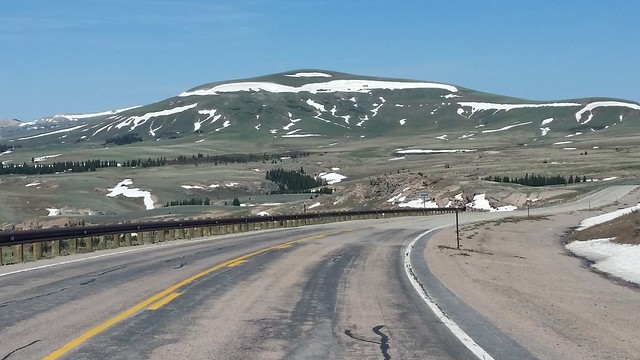 After driving a total of a hundred miles, we finally came to the turn for the Medicine Wheel. 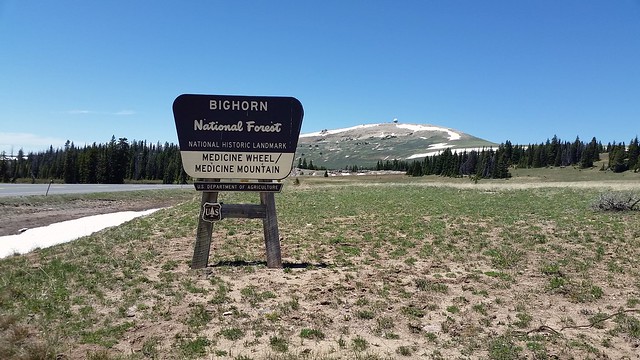 A well-maintained dirt road leads from the highway two miles up to a parking area.  From there it is a hike of a mile and a half to the wheel.  At an elevation of just under 10,000′ the site is not officially open yet and snow blocks the path in some spots. 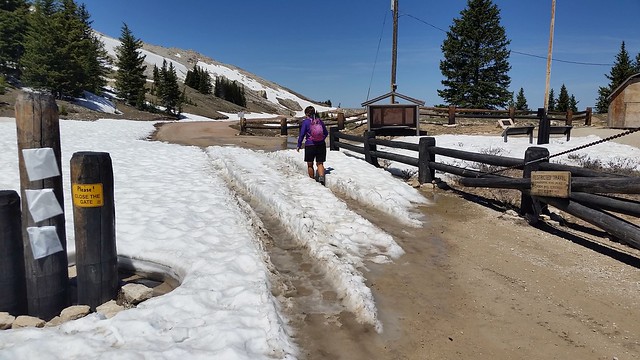 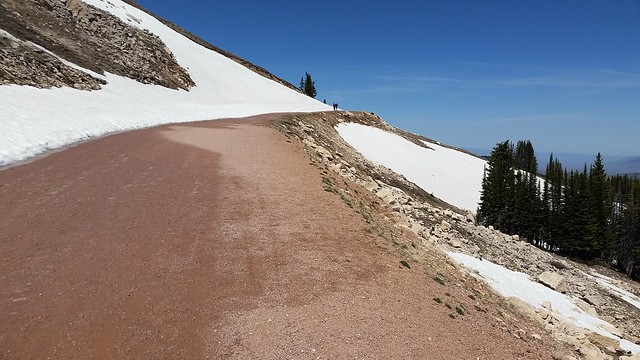 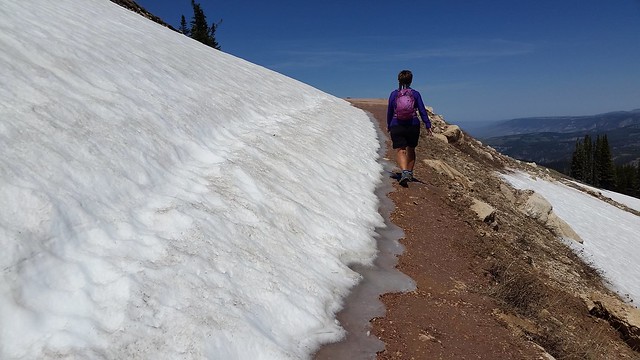 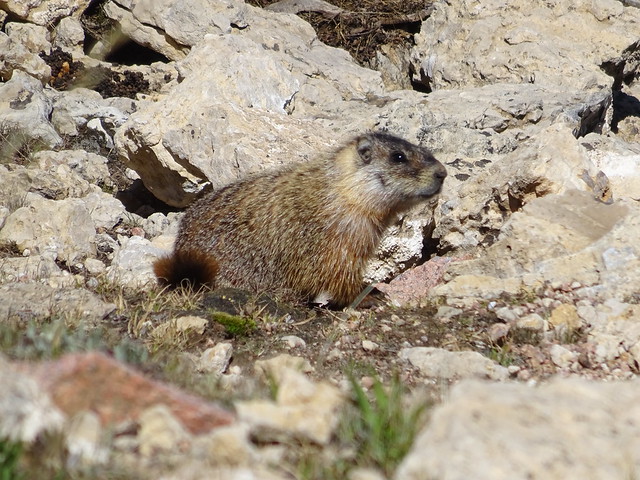 This little guy kept a keen eye on the trail

A bench along the path had a beautiful view and provided a great spot to enjoy lunch. 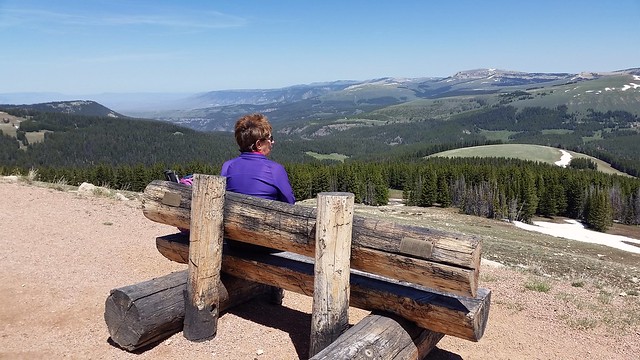 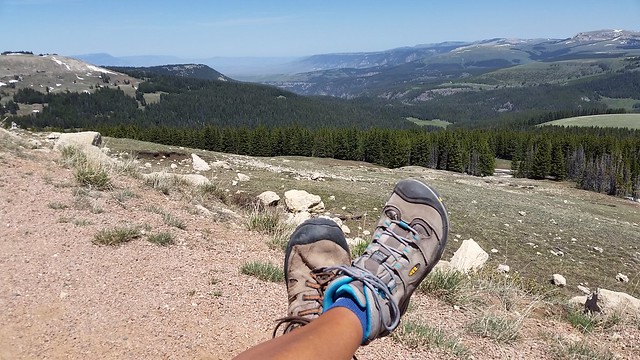 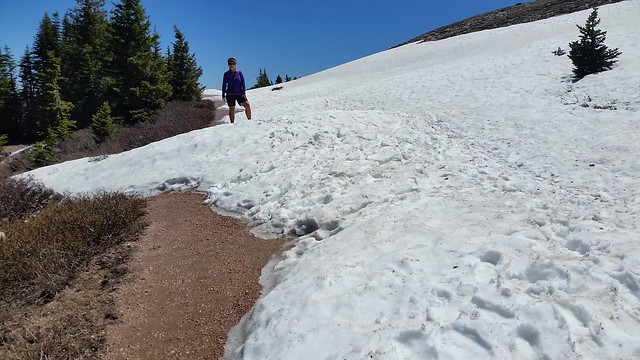 As we walked down a hill we could see the location of the wheel on top of the next hill. 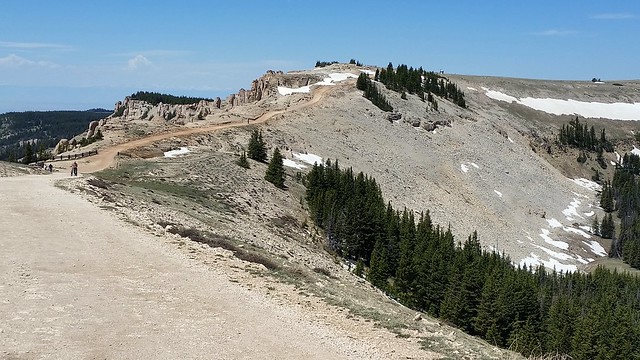 The wheel is on the peak in the distance 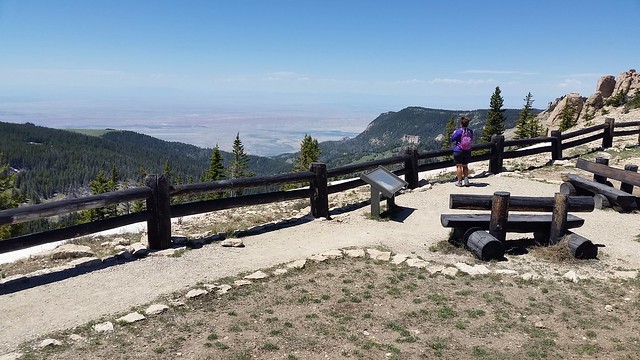 Another viewpoint along the path

We arrived at the wheel to find that the information panels nearby had not yet been installed.  The clear skies allowed the sun to keep us warm but the wind was very strong. 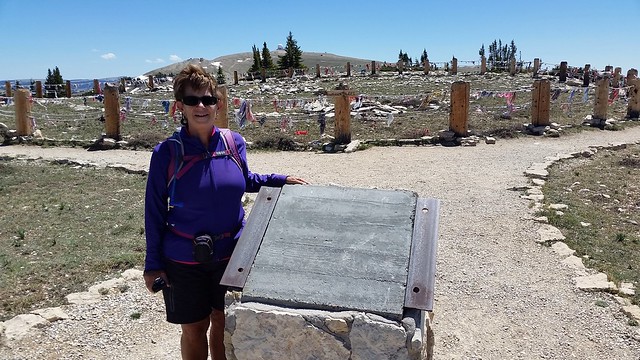 Not much info here!

The wheel is built from roughly loaf-sized stones gathered from the surrounding area. The structure consists of a circular rim 25 yards in diameter, 28 spokes extending from the rim to the center, and a series of seven cairns.  The age of the circle is undetermined but  archaeological evidence indicates that the area has been used by Indian tribes for over 7,000 years. 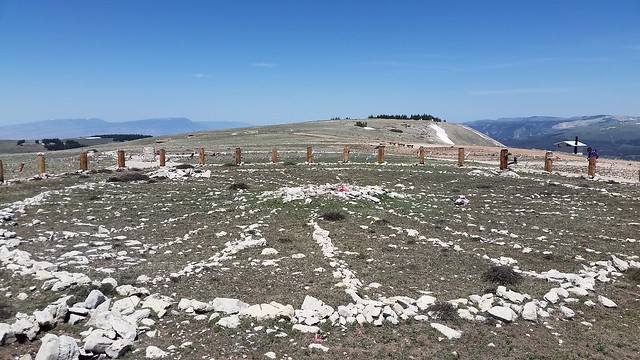 Native Americans still use the wheel for ceremonial purposes and leave spiritually significant items attached to the rope fence that surrounds the structure. 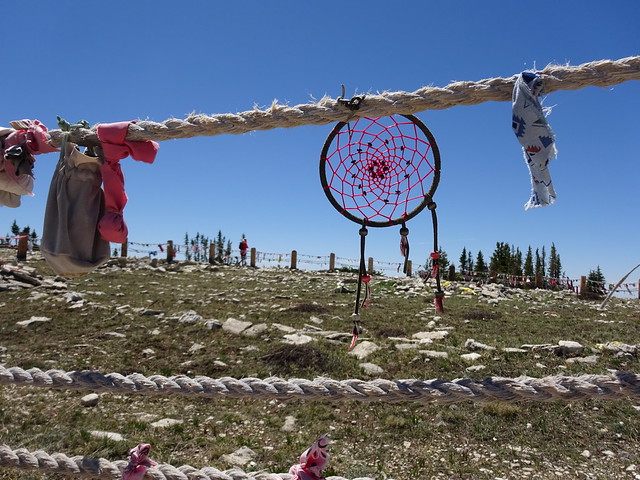 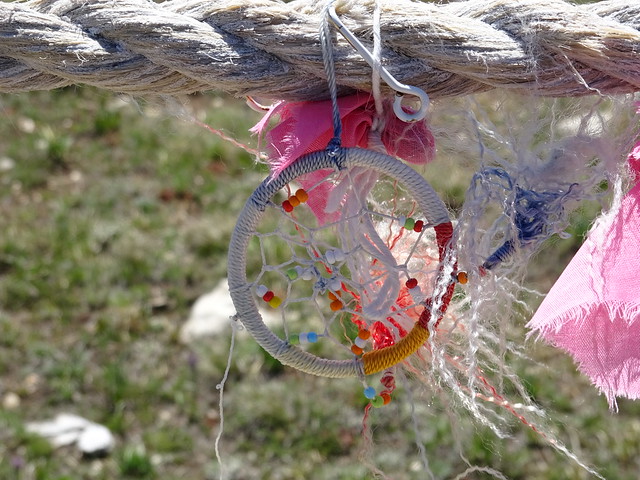 As we visited the wheel, a rock formation along a cliff just to the west caught our eye, so we went over to take a look. 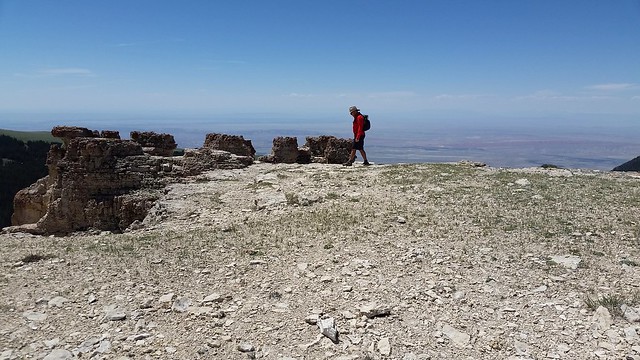 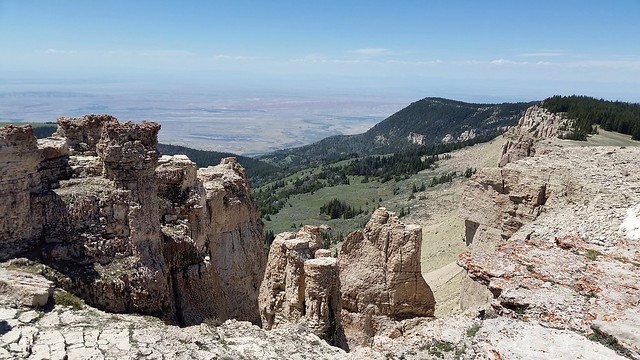 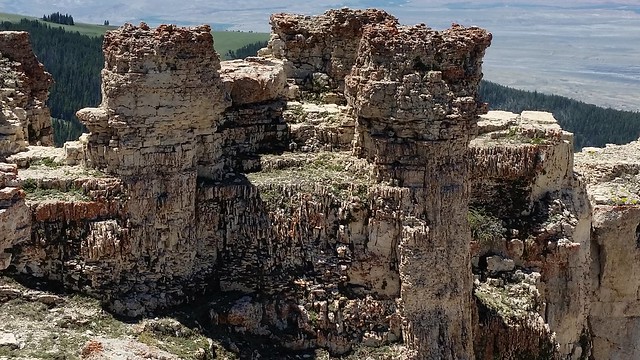 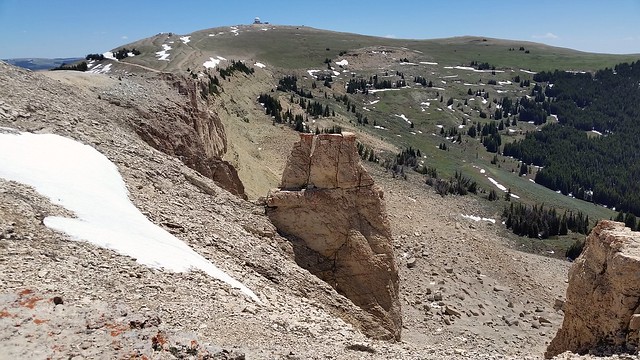 We returned to the Jeep and began the journey back down the highway as it ran along a creek.  As we rounded a curve we both spotted a dark spot along the water.  We quickly came to a halt and, upon a closer look, spotted this guy feeding along the creek. 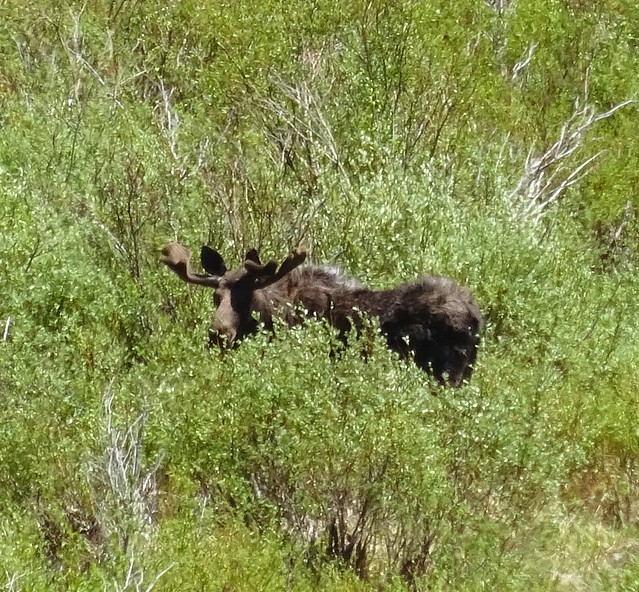 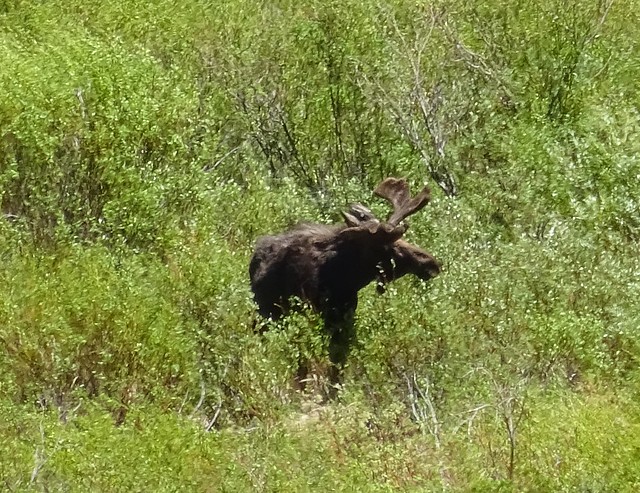 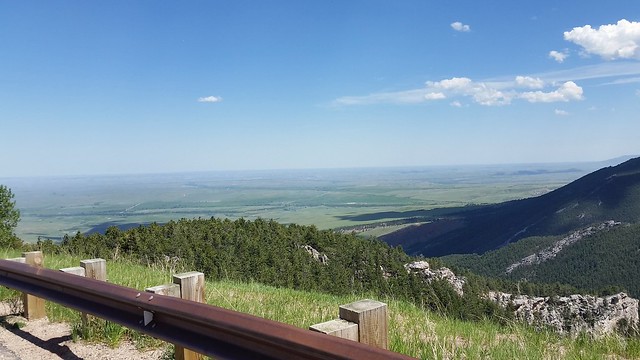 Heading back down out of the mountains

After needing jackets while visiting the Medicine Wheel, we returned to Buffalo and found temperatures in the low 90s.  But we managed to survive the heat and the forecast calls for lower temperatures tomorrow!

38 Responses to A Visit to the Medicine Wheel