We left Richfield, UT Thursday morning and drove 120 miles north to Provo.  With Memorial Day approaching we had a site reserved in Utah Lake State Park through the holiday week-end.  Utah Lake is the largest fresh water lake in the state.  Due to the arid climate almost half of the water loss in the lake is due to evaporation, which gives the water a slightly salty taste.  Although smaller than the Great Salt Lake, Utah Lake is still fairly large (24 miles long, 13 miles wide) but it is pretty shallow ( ave. depth is 10′).  The state park, located at the mouth of the Provo River, has 54 paved sites in two loops.  All sites have water and electric (30 amp).  While there are a number of pull-through sites we selected a back-in with a great view of the mountains.  Some of the sites have a view of the lake but you can’t see much of it as the campground is a bit far from the water. 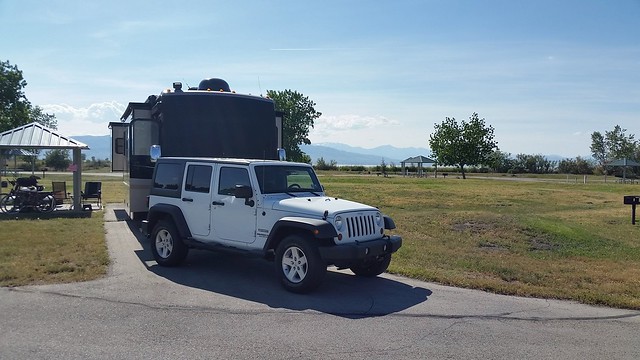 Site B-10 with the lake in the distance 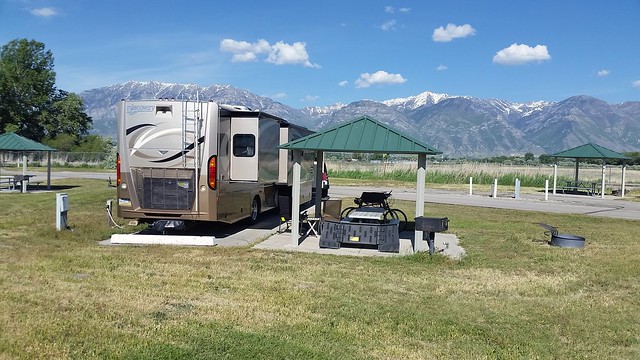 Great view of the Wasatch Mountains

Two long jetties constructed out into the lake form a nice harbor for small pleasure boats and a nice spot for fishing. 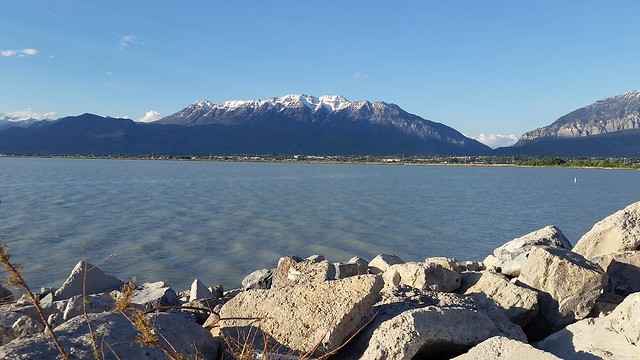 View from one of the jettiies

When we arrived on Thursday the park was almost empty, but by Saturday night every site was filled with families in tents and small campers.  They appeared to be having a great time playing games and cooking outside.  But there is plenty of room between sites, so they didn’t bother us and everyone appeared to be well-behaved.

With the working public enjoying the long weekend we just stayed out of their way and took the opportunity to do some shopping since we’ve been in some fairly isolated areas the last month or so.  But we did take advantage of the nice bike trail that runs through Provo.  You can access the trail right outside the park entrance and ride all the way to the other side of the city without having to cross a road, as the trail goes under them all. 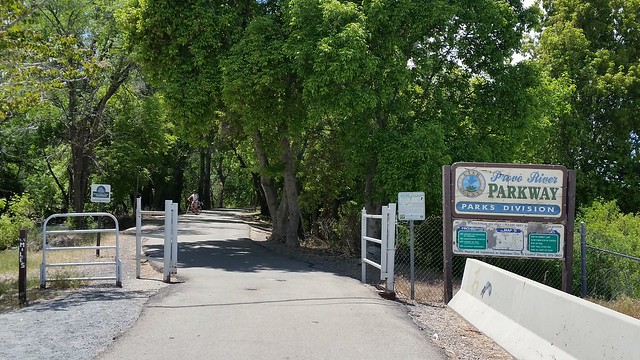 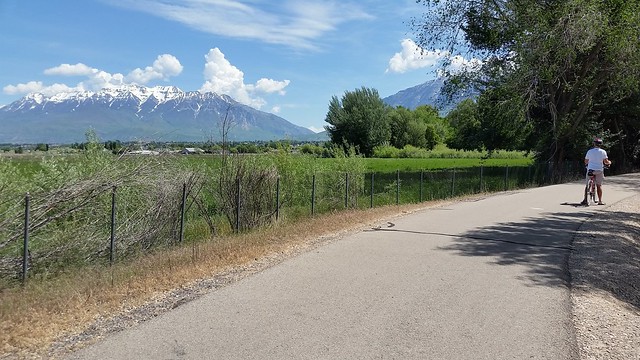 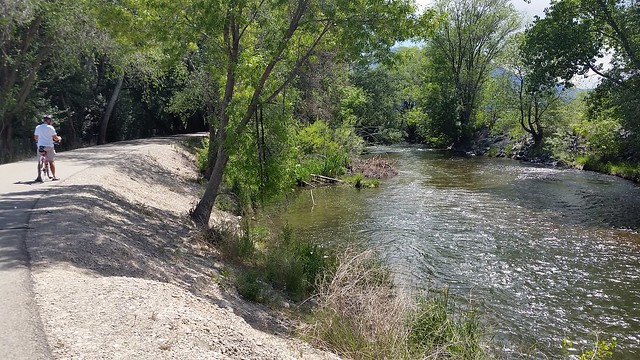 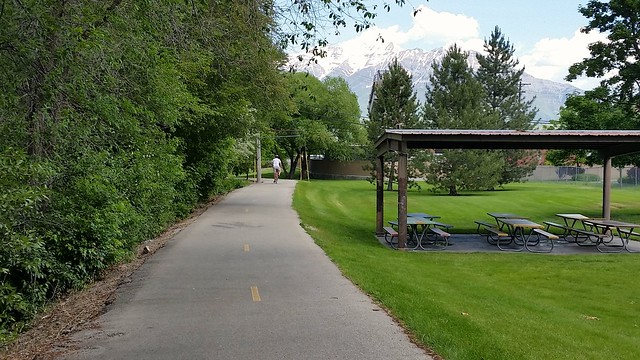 Going through one of the many parks in Provo

Once on the east side of the city we road a short distance to the south for a visit to Brigham Young University.  The school has a very nice campus with great views of the mountains just to the east. 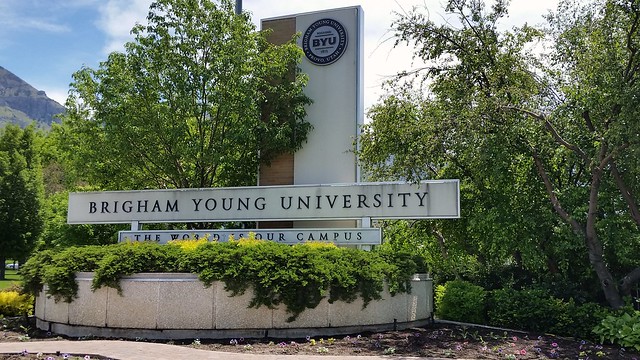 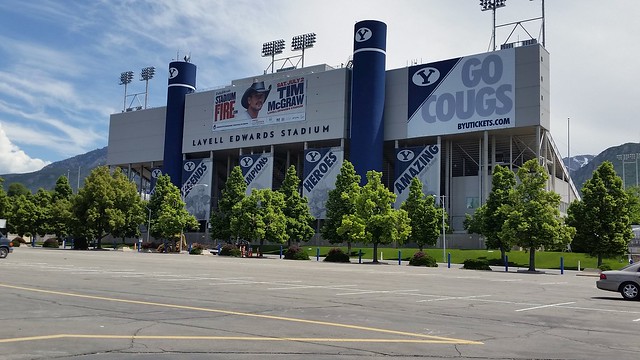 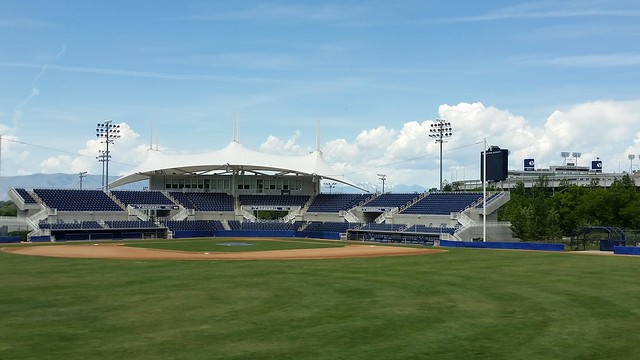 We also enjoyed a few visits to one of those coffee shops that are part of a chain out of Seattle.  As we sat inside we enjoyed the view out the shop’s window of Mt. Tipanogos, the second highest peak (11,700 ‘) in the Wasatch Range. 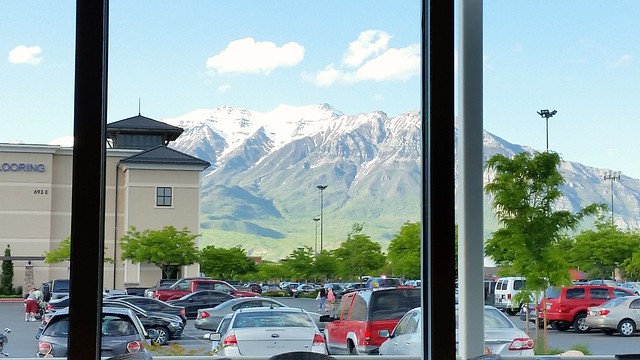 The Starbucks we visited is just north of Provo in the community of Orem.   We were surprised to find that there were no Starbucks near the campus of BYU.  Usually a college town has a number of locations near or on the campus.  But BYU, being a predominately Morman university, has a very strict behavior code for students.  Among other things, students pledge to abstain from alcoholic beverages, tobacco, coffee, and tea.  Guess a coffee shop wouldn’t do much business near BYU!

Now that the holiday has passed it is time for us to begin to explore some new locations.  Tomorrow we leave Utah and head about 200 miles to the northeast into Wyoming where we will spend a couple of nights in Rock Springs.  Then, it’s on to Casper for a brief visit before we head to the town of Buffalo for a month.