The weather here outside Bryce Canyon NP, at about 7500 feet of elevation, can get a little nasty, even in the middle of May.  We did a long hike on Sunday soon after our arrival as the weather services were all predicting rain for the next three days, making hiking trails impassible.  And while it never rained all day, we did have a few showers each of the next three days, and even some snow and hail. 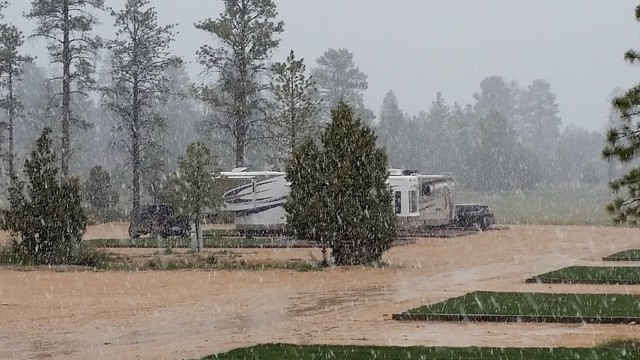 But today (Thursday) the weather cleared a bit, so we headed out for a hike.  Since we have done a couple of the best hikes in Bryce Canyon NP and there are many tourists in the national park, we headed about 30 miles to the east for a hike in Kodachrome Basin State Park.  The area where the park is located was named by a team from the National Geographic Society who explored and photographed it in 1948 for a story that appeared in the September 1949 issue of National Geographic. They named the area Kodachrome Flat, after the then relatively new brand of Kodak film they used.  In 1962 the area was designated a state park but, fearing repercussions from the Kodak film company for using the name Kodachrome, the name was changed to Chimney Rock State Park.  It was renamed Kodachrome Basin a few years later with Kodak’s permission.

We had visited this beautiful little park three years ago but rain kept us off all but one of the trails.  For this visit we chose the longest hike in the park, the Panorama Trail.  The trail is a series of loops, allowing hikers to choose how far they wanted to go, with no radical change in elevation.  We did all the loops and ended up with a hike of a bit under 6.5 miles. 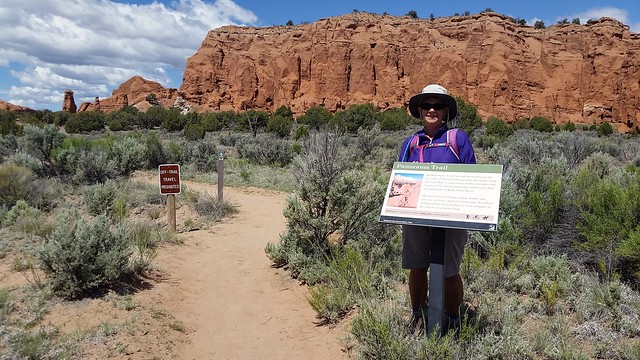 Kodachrome SP has nearly 70 monolith spires ranging from 6 to 170 feet high.  We passed by many of the spires along the Panorama Trail. 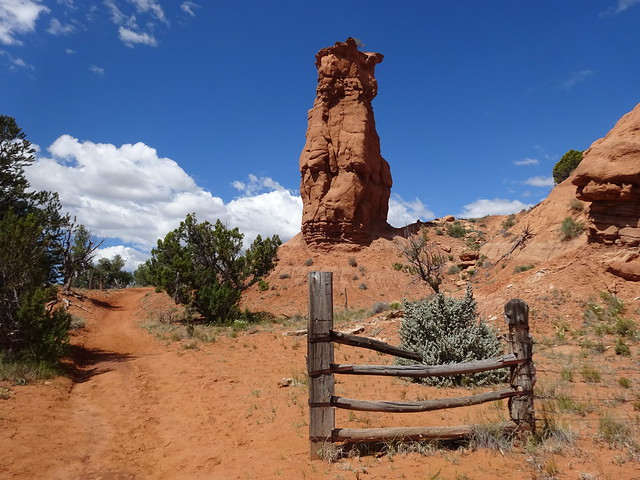 Less than a mile into the hike we came upon  a small alcove in the rocks called “Indian” Cave.  The spot was not labeled on the park map of the trail so we were surprised to see it. 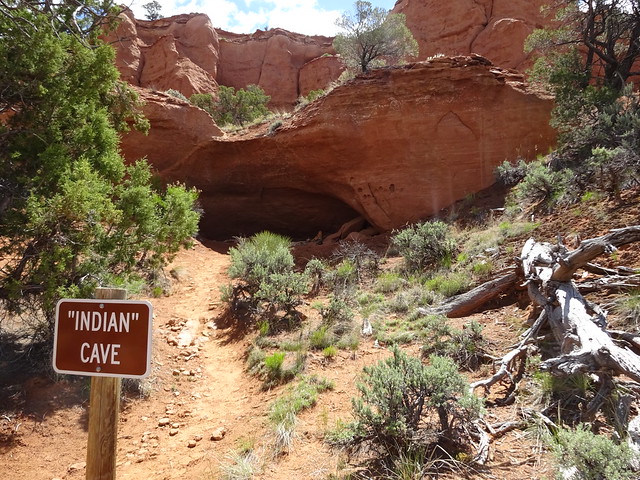 The wall on the right side of the “cave” had some interesting cuts in the rock in the outline of a human hand. 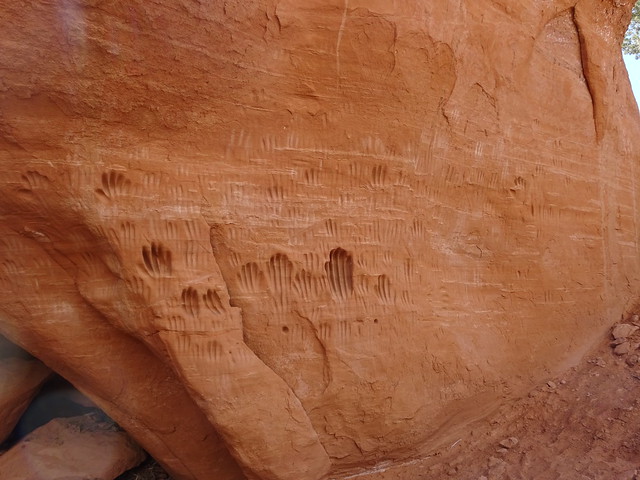 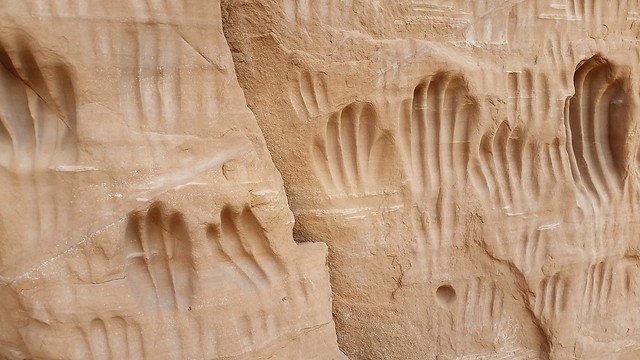 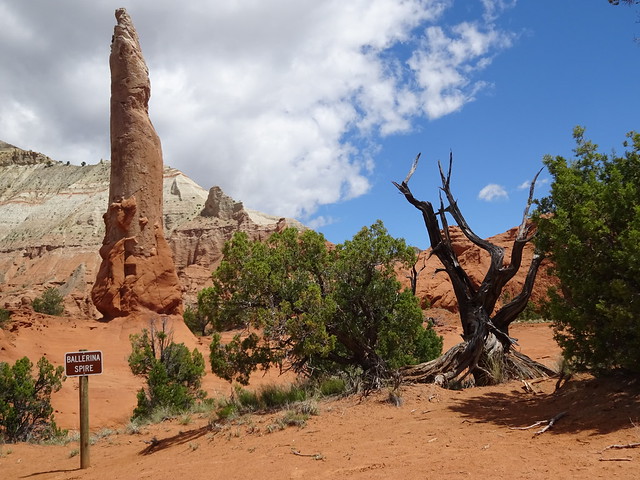 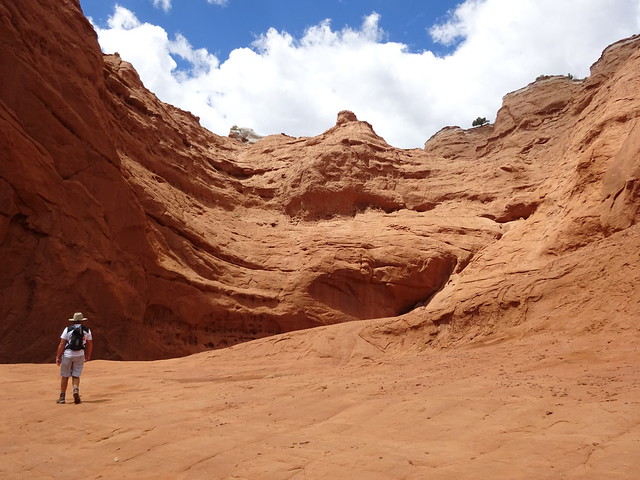 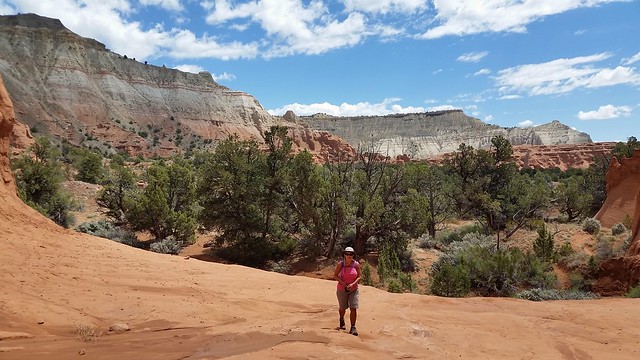 The view from the alcove 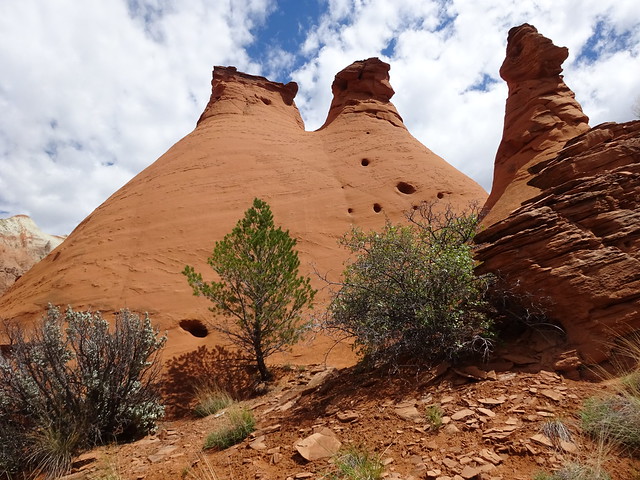 One of the alternate side trail loops leads about a half mile to a neat cut in the rocks call Cool Cave. 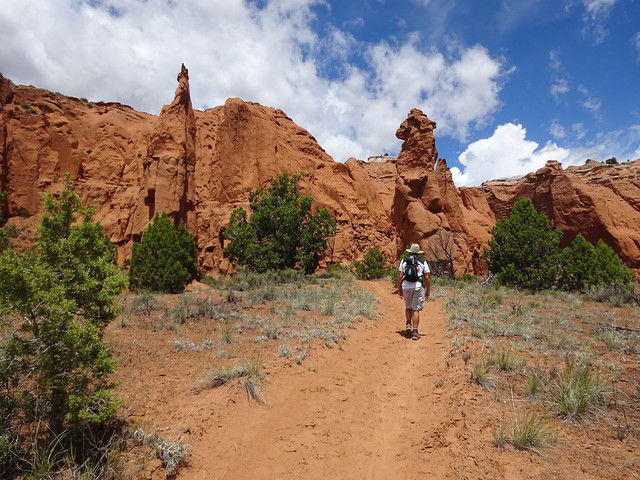 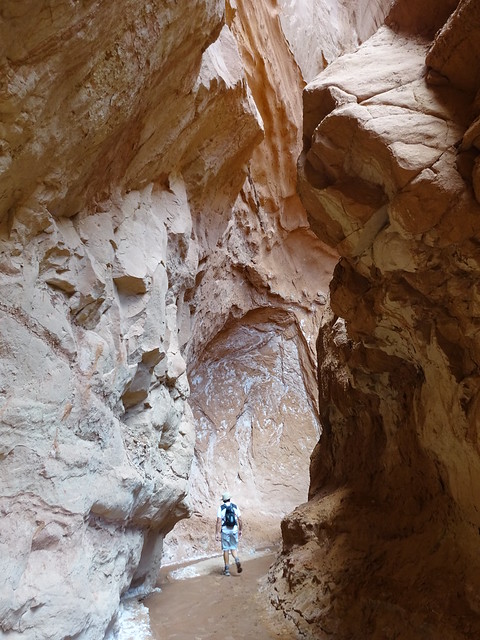 In the wash leading into Cool Cave 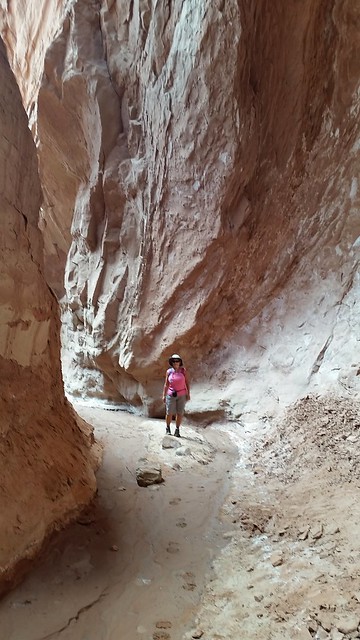 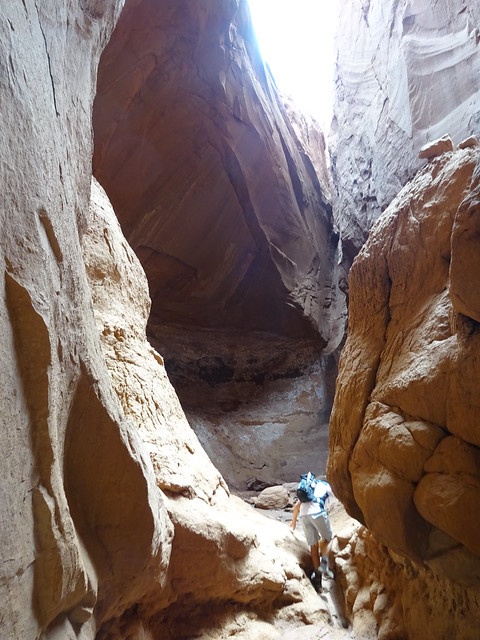 Scrambling into the “cave”

The large area at the end of the wash is not really a cave, but the bottom of what is probably a beautiful waterfall after a storm.  The opening in the rock where the water pours in towers over you. 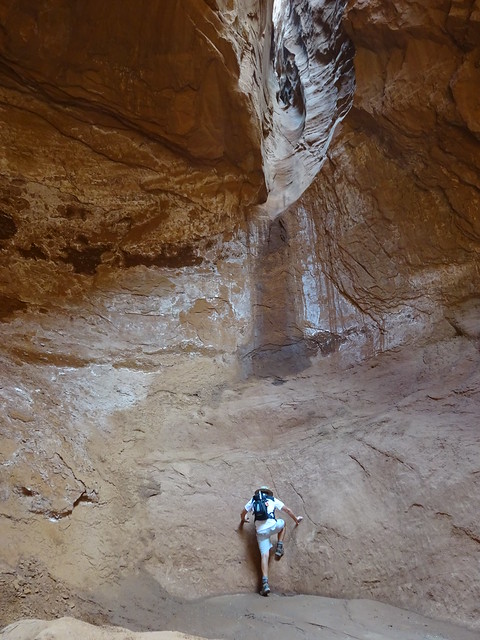 After circling around back to the main trail, we hiked for a while then took another side trail for a half mile up to Panorama Point for a nice few of the surrounding area. 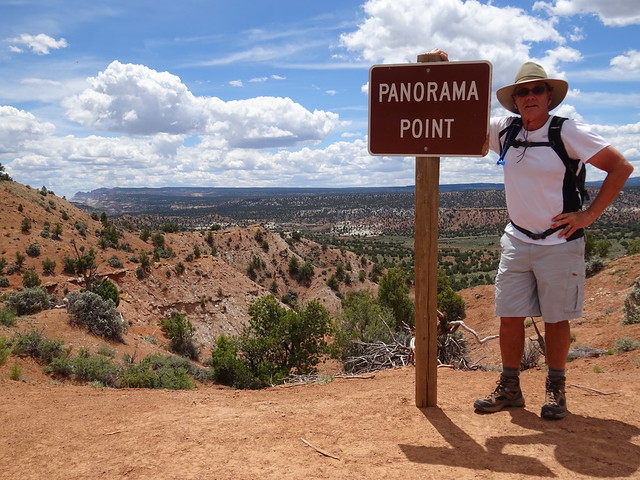 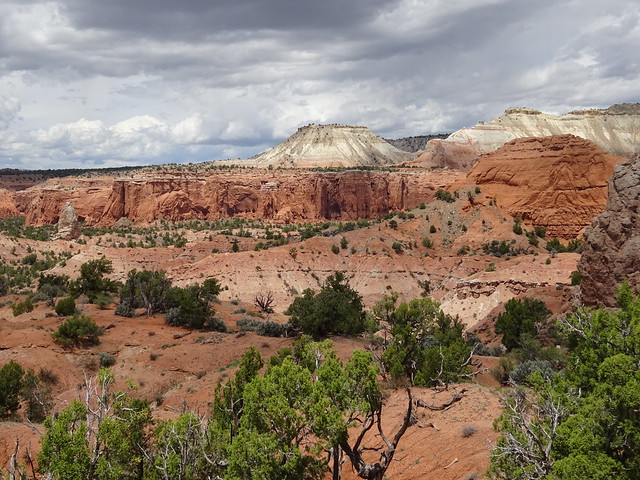 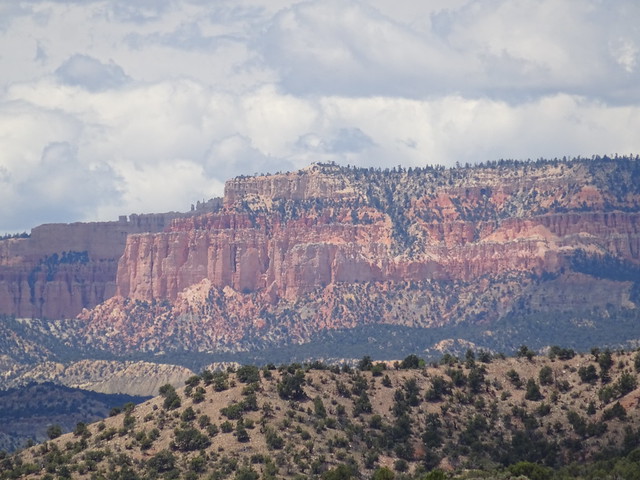 Coming back down from Panorama Point we were treated to some great vistas as the sun poked through the clouds on to the surrounding rocks. 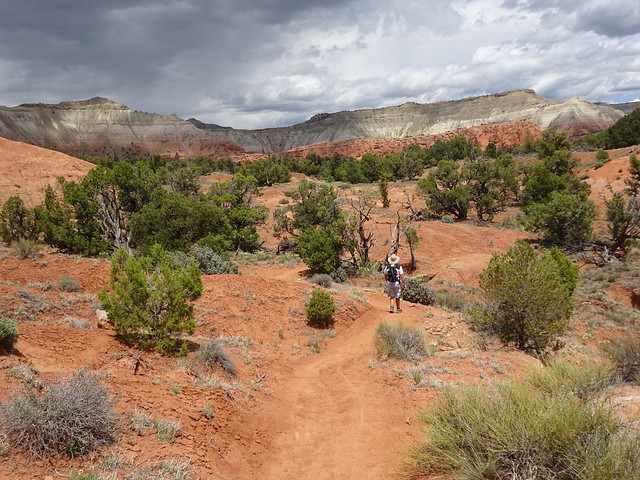 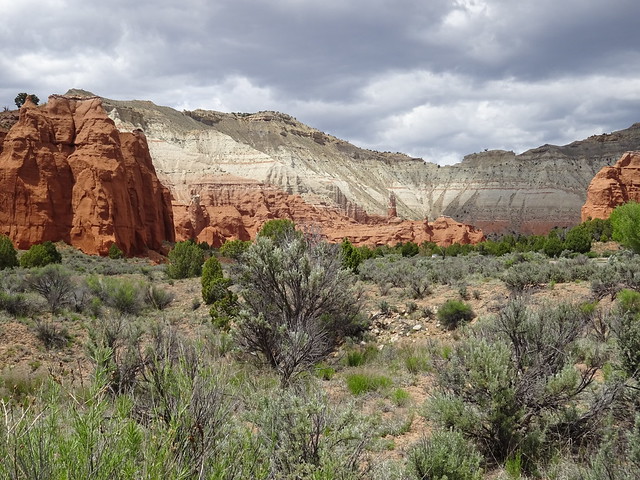 This little state park is a great place for a one day visit ($8 per vehicle) or a longer stay at one of the two campgrounds.  One of the campgrounds has some nice paved pull-through sites with full hook-ups, while the other is more for tents or small vehicles (no hook-ups).  But make a reservation way in advance if you want to be in the full-hook up area, as the sites are limited and this is a popular spot.