For our final adventure during this visit to the Torrey area, we drove a long (we’re talking long) way east for a visit to the Horseshoe Canyon.  Horseshoe Canyon, formerly known as Barrier Canyon, is in a remote area west of the Green River and north of the Canyonlands National Park Maze District.  It is known for its collection of Barrier Canyon Style rock art, which was first recognized as a unique style here.  A portion of Horseshoe Canyon containing a panel of art called The Great Gallery is part of a detached unit of Canyonlands National Park.  The Horseshoe Canyon Unit was added to the park in 1971 in an attempt to preserve and protect the rock art found along much of its length.

To get to the trailhead we drove 50 miles east on UT-24 to the tiny community of Hanksville.  We continued past Hanksville, still on UT-24, for another 18 miles to a right turn, marked with a sign, onto a well-maintained dirt road called Lower San Rafael Road. 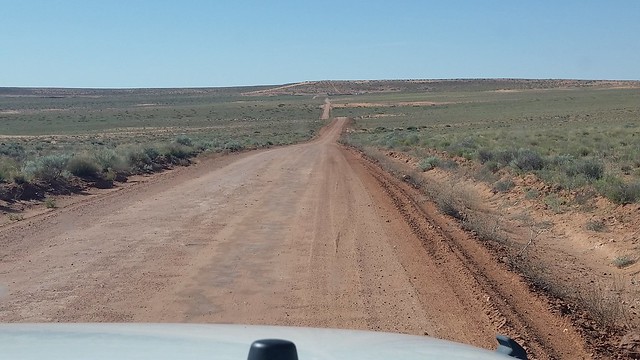 After driving about 30 miles on Lower San Rafael Road we came to another right turn, again well marked with a sign, that lead the final two miles to the parking area for the trailhead.

Do you remember the movie “127 Hours?”  The movie was based on the book Between a Rock and a Hard Place, which tells the story of hiker Aron Ralston’s experience being trapped in nearby Blue John Canyon, which feeds into Horseshoe Canyon, and how he was forced to amputate his own right arm with a dull multi-tool in order to free himself after his arm became trapped by a boulder.  Ralston had parked his truck in this parking area before setting off on his mountain bike. His plan was to park his bike down the road and hike back through Blue John Canyon and return to the truck through Horseshoe Canyon. 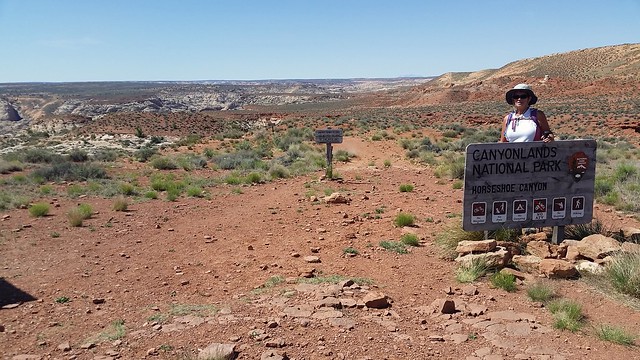 For most of the way this trail is an easy hike along a wash.  The challenging part is getting down to the wash and then getting back up out of it at the end (about a mile and a half in each direction), as there is a 750 foot elevation change between the trailhead and the wash.

In the final section leading down into the wash the trail goes through deep sand.  It is easy to hike through the sand on the way down, not so much on the way up! 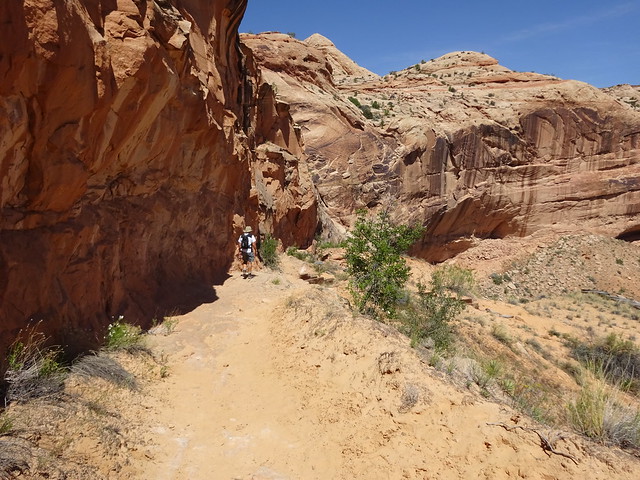 Heading down into the sand 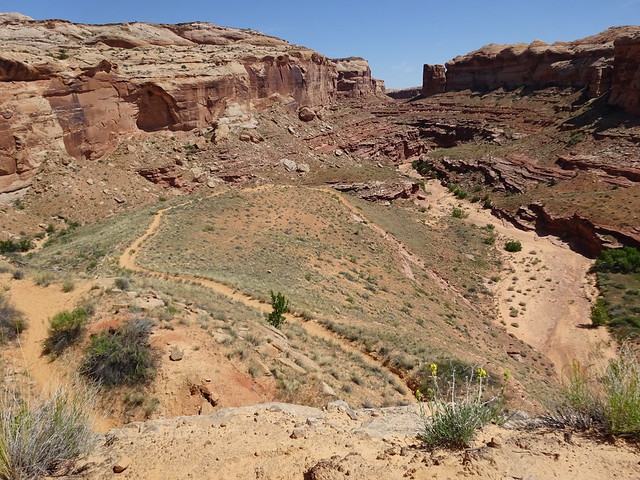 The sandy trail leading into the wash

At three different spots along the trail you pass a small circle of rocks that surrounds a dinosaur track in the slickrock.  Two of the tracks are right on the trail on the slickrock section as you head down toward the wash.  The third is in the wash on a shelf along the creek.  We missed that one on the hike in but the volunteer we met later told us how to find it. 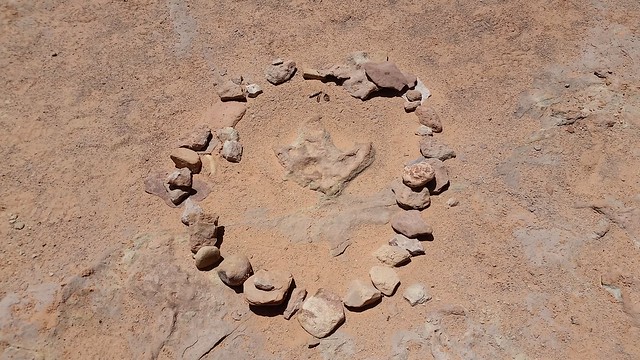 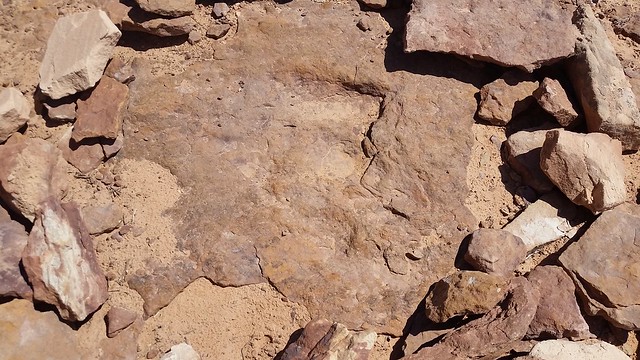 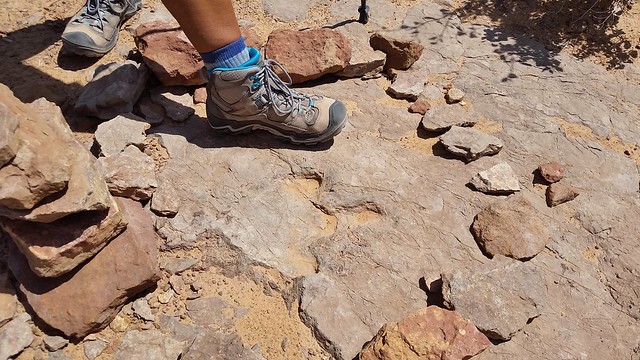 Once down in the wash the trail winds its way up the canyon along a shallow creek.  After a  short hike up the canyon, about two miles from the trailhead, a panel of artwork called Horseshoe Shelter appears along the canyon wall on the right. 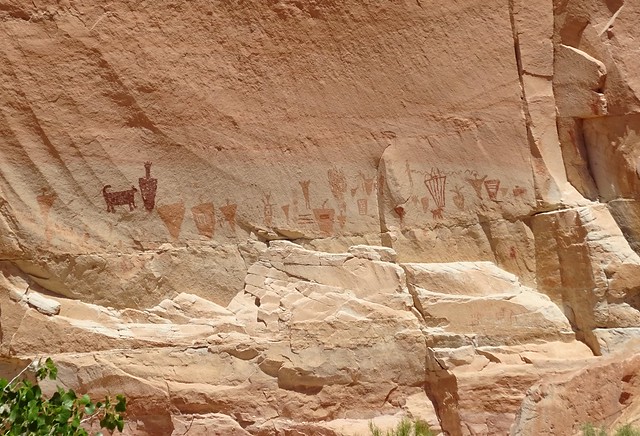 About a half mile further up the wash at a sharp bend in the canyon the trail goes by a large amphitheater on the right.  Inside it is another panel of artwork called the Alcove Gallery. 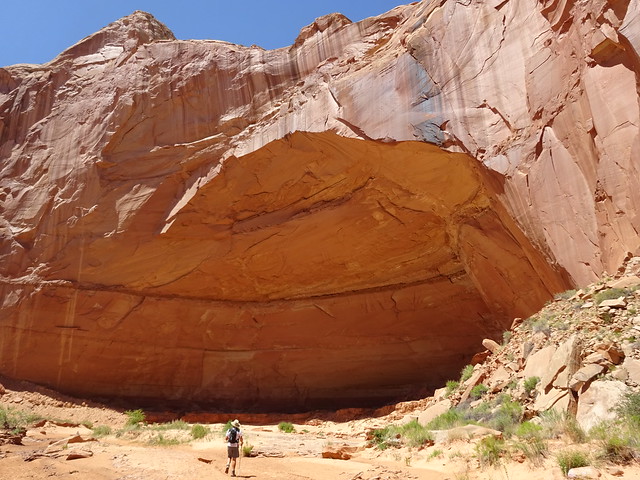 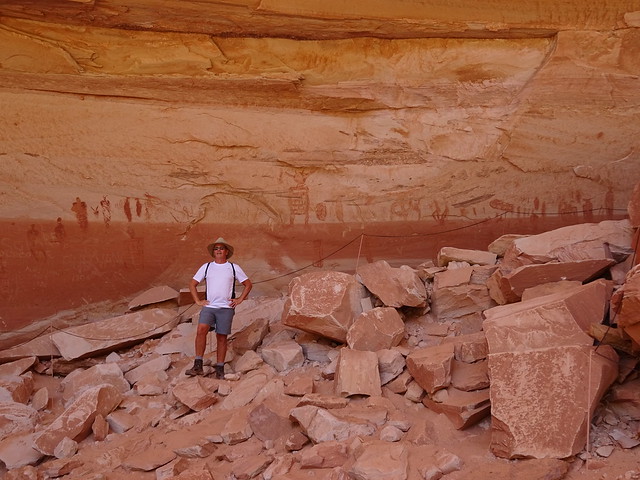 Inside the Alcove with artwork along the wall 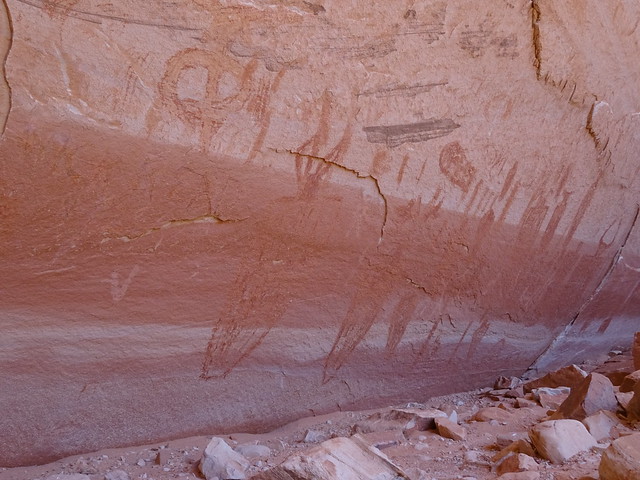 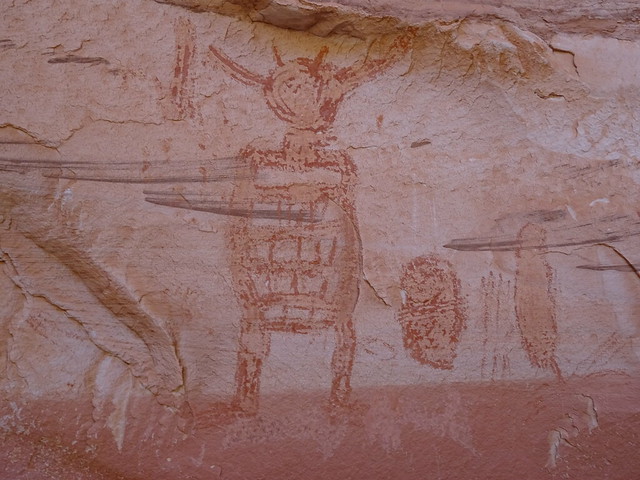 The area in front of the Alcove is where Aron Ralston finally was able to get help.  As he hiked down the wash he met a family just getting ready to leave the Alcove and return to the trailhead.  The father stayed and helped Aron while the mother and child hiked back down the wash.  They were spotted by a rescue helicopter searching for Aron, which was able to land in the wide area of the wash where the trail turns up into the sand.  The helicopter then took Aron to Moab where he was admitted in remarkably good condition, considering the five day ordeal he had just endured.  After reading this, you must get the book or see the movie.  We’re reading the book as this blog is being written!

OK, enough about Aron Ralston, let’s get back to the hike.  After hiking almost four miles from the trailhead we came to the end point of our journey, the Great Gallery.  The Great Gallery is one of the largest and best preserved collections of what is called Barrier Canyon Style rock art in the country.  The panel itself measures about 200 feet long and 15 feet high. The panel contains about 20 life-sized images, the largest of which measures over 7 feet tall. 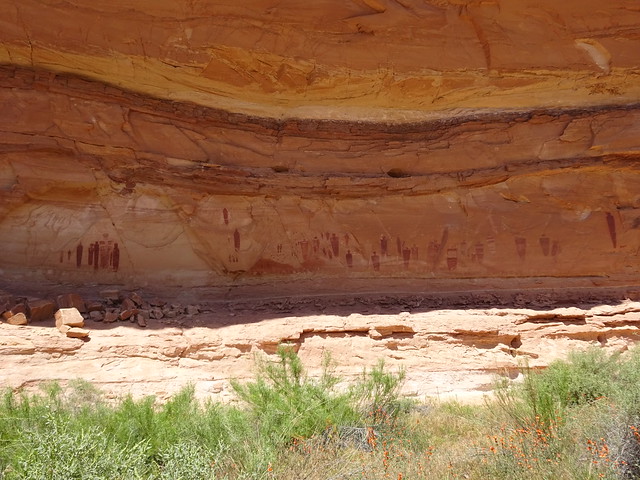 We were pleased to find a park volunteer at the Great Gallery.  While he was there to provide information about the artwork, we suspect his main function was to protect the panel from any vandalism.  Nevertheless, he was very helpful in pointing out interesting things related to the panel.  One of the interesting things we learned from him concerned the main figure in what is called the Holy Ghost Panel. 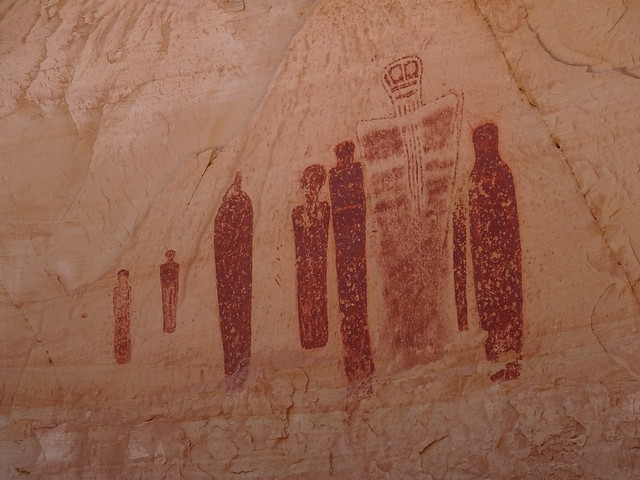 Visitors can’t get up close to the Great Panel, but the volunteer told us that if we could get close, we would see that the central figure in this section is composed of small dots of paint.  The theory is that, while a brush-like tool was use for the other figures, the artist used a small reed to blow the paint on to the rock for this figure. 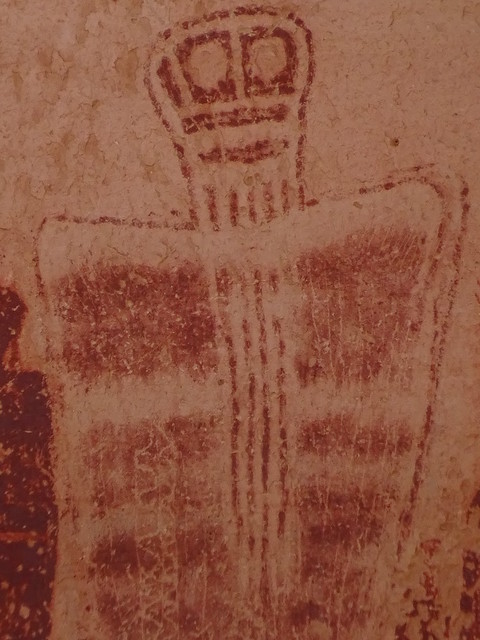 He also pointed out a few more interesting parts of the panel, including two small figures that appear to be fighting. 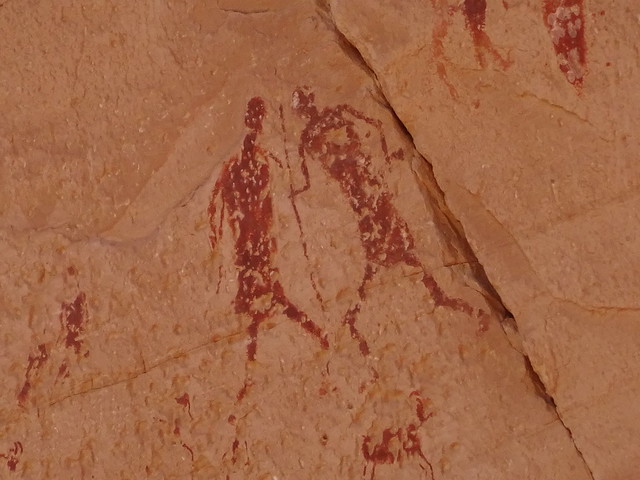 The line painted on the left in the photo below lines up perfectly with the sun rise on the Summer Solstice.  A pile of rocks that have fallen from the canyon wall along the left side of the Great Panel are believed to have covered a similar line for the Winter Solstice. 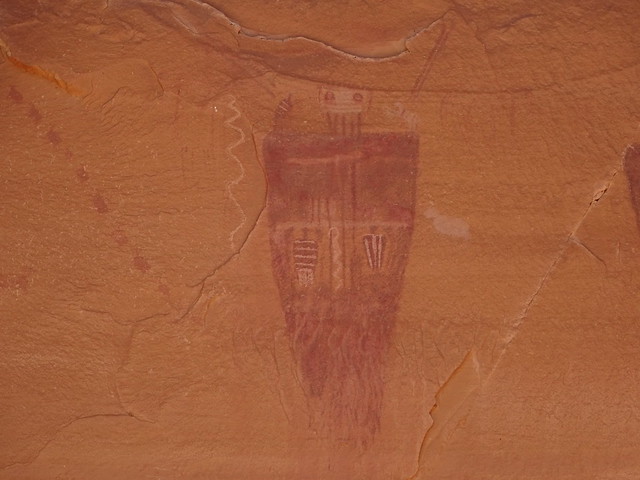 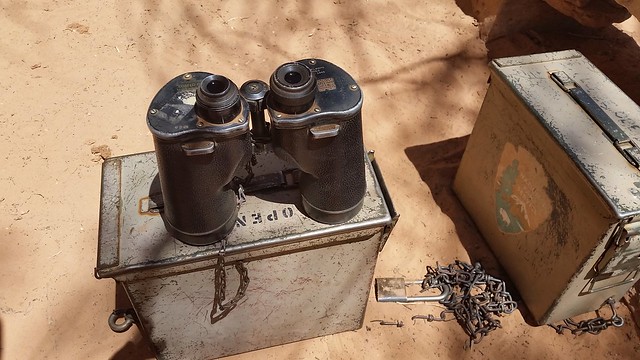 The binoculars are very heavy and appeared to be WWII vintage.  A closer look revealed them to be US Navy issue from 1943 and they were made in Rochester, NY by Bausch & Lomb! 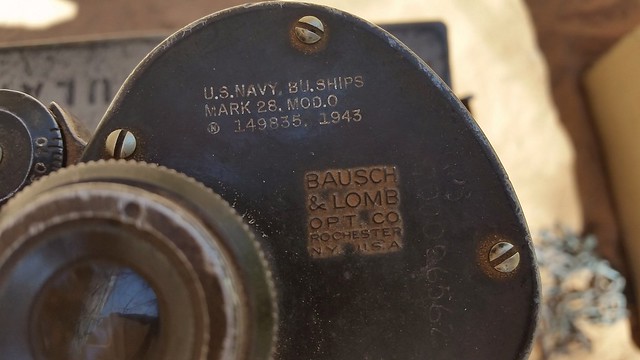 The return hike is a nice walk back through the canyon along the tree-lined stream.  Then its back up the 750 feet of elevation gain for a mile and a half to the trailhead. 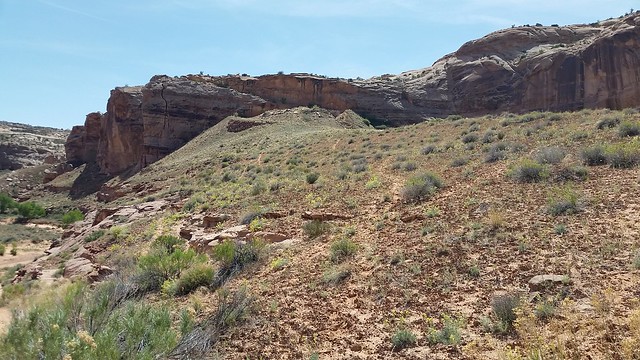 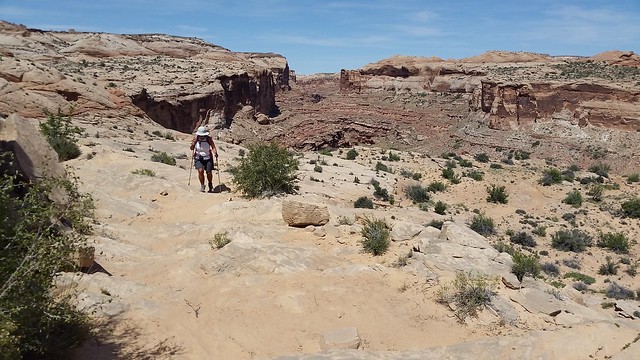 Once above the sand the trail continues up the slickrock

We returned to the Jeep and headed back up the dirt road,  passing a large area of sand dunes along the way. 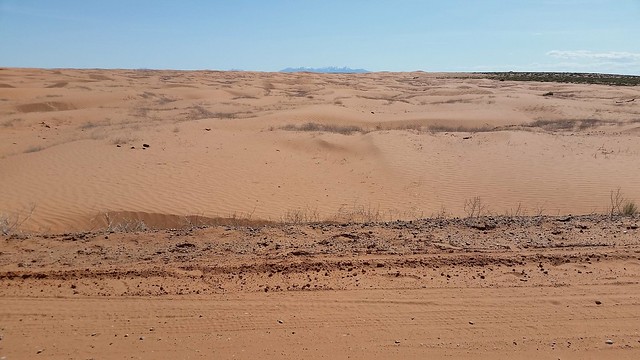 The volunteer in the canyon told us he found a shortcut to Hanksville that cut off about ten miles, so we turned left on to what we though was the road he described.  The dirt road was nice and smooth as we drove through a few buildings used during cattle round-up time.  Our only obstacle was a young calf standing in our path.  When we slowly approached, he would turn and walked further down the road.  If we went faster to pass him, he would begin to run ahead of us.  This little give and take went on for about a mile before he finally got the message and took a right turn into the desert. 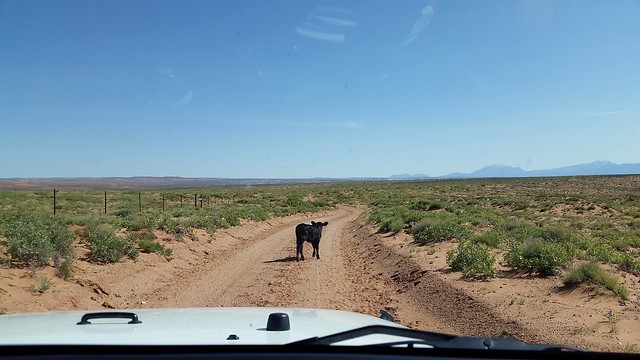 We were unsure if we were on the road described by the volunteer, but there were tracks from another vehicle and we were headed in the correct direction so we just kept driving, knowing we could always turn around if the conditions deteriorated. 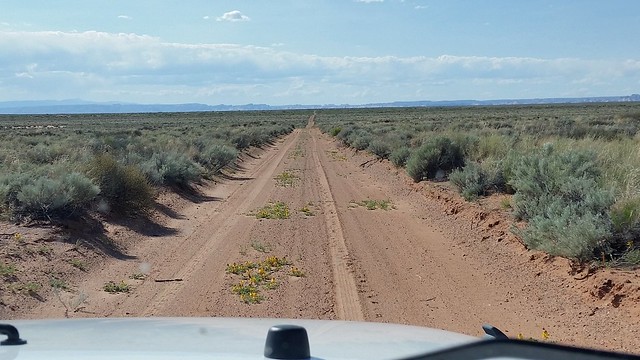 We came to a few forks in the road,  so we followed the old adage of Yankee great Yogi Berra (“If you come to a fork in the road, take it!).   We knew we were headed in the right direction, and as we neared Hanksville we were able to get a bit of data signal allowing us to look at Google Maps.  At an intersection the map indicated we should continue straight and the road would soon lead to UT-24.  This section of the road showed no sign of any maintenance, but the tracks we had been followed continued, so we did also. 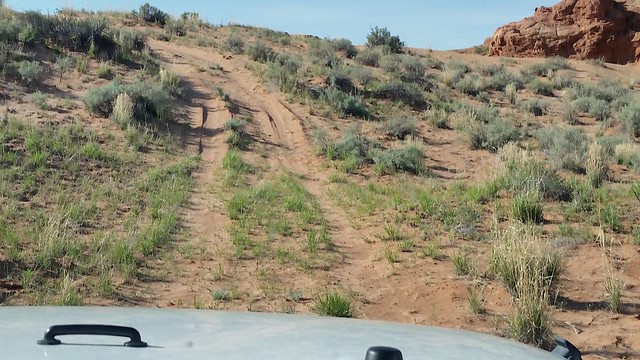 At one point we came to a hill where the wind had completely covered the road with deep sand.  At first we couldn’t get through it, so we backed up a bit, took out our trusty shovel (still in the box since we had never needed to use it) and cleared a pathway.  After scouting ahead a bit on foot we knew the sand only continued for a short distance over the hill.  So we backed up a bit more to gain some speed and the Jeep went up through the sand with no problem.  After charging through a couple more sand dunes we safely reached the highway.  It turned out we didn’t save any distance with our “short cut” but the route just added more excitement to this adventure.  Later research on Google revealed that, you guessed it, we were on the wrong road!  After a total drive of of just a mere 198 miles we returned to Torrey tired but please with this adventure.

We have now wrapped up this visit to Torrey and Capitol Reef NP.  Next up for us is a visit to Bryce Canyon.  More on that later . . .