While many of the hikes in Capitol Reef NP go through canyons with great views of the rocky walls above you, a few of the hikes take you up on top of the rocks and provide great views of the surrounding area.  One of the best views is from the top of a rocky pile called Navajo Knobs.  But to enjoy that view you must hike up a trail of over four miles with an elevation increase of over 16oo feet (more on that later). 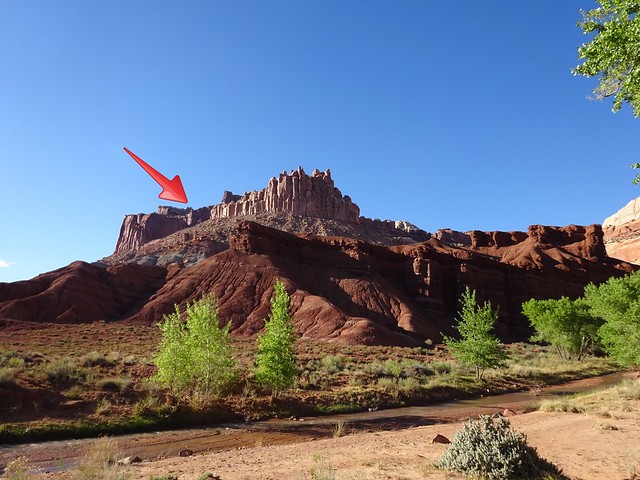 The trail begins as part of the trail that leads to the Hickman Bridge, a very popular path leading to the bottom of a large, beautiful natural bridge.  There is a paved parking area along the north side of UT-24 just a few miles east of the Capitol Reef  Visitor Center.  The lot can fill up quickly on a nice day, but there is more parking available along the highway (where we ended up parking). 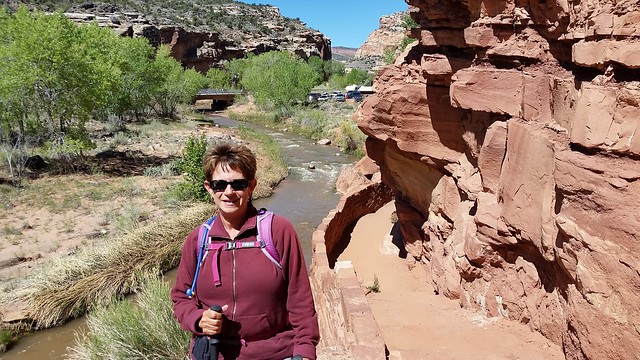 Starting our hike along the Fremont River

The hike begins along the Fremont River for a short distance before climbing steeply up.  At about a quarter mile a sign marks where the trail to the Navajo Knobs and Rim Overlook splits from the trail to the Hickman Bridge.  If the trail to this point has been crowded, this is the point where you will lose most hikers, as they are headed for the bridge. 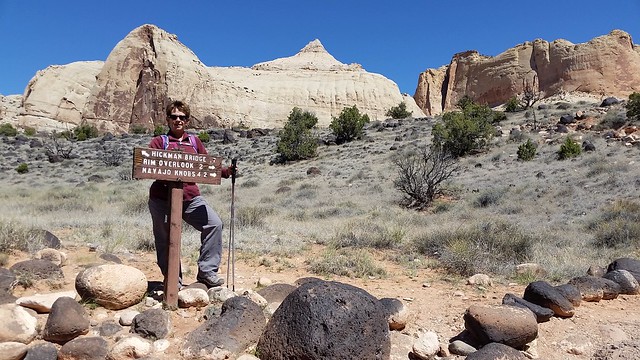 Less than a mile further up the trail there is a sign pointing to where you can scramble out on the rocks for a view of the Hickman Bridge from above.  Although the best spot to view the bridge is from the trail that leads out and under it, the view from above is pretty nice. 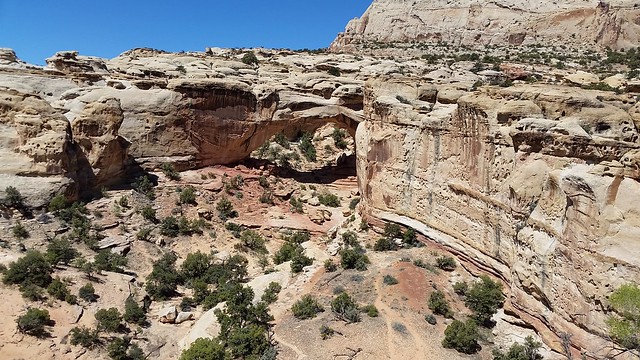 After passing the bridge overlook the trail continues to wind its way up, going through a number of dry washes that are followed by steep ascents.  After about a mile and a half you come to the Rim Overlook.  The slickrock along the edge of the overlook provides a great place to enjoy a rest and a snack while enjoying the views below. 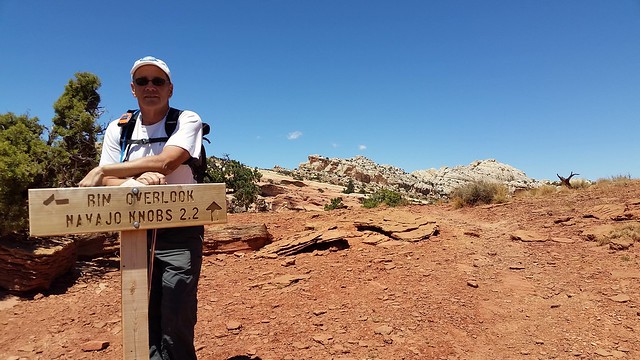 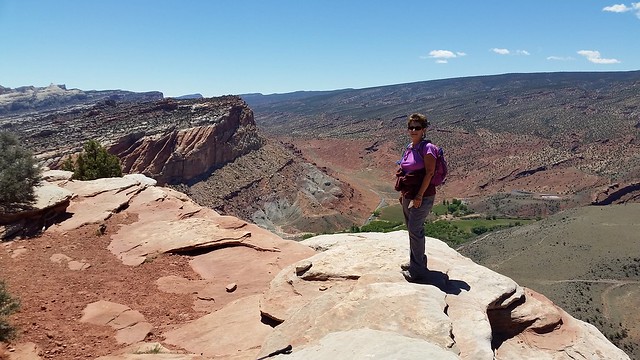 The view north from the Rim Overlook 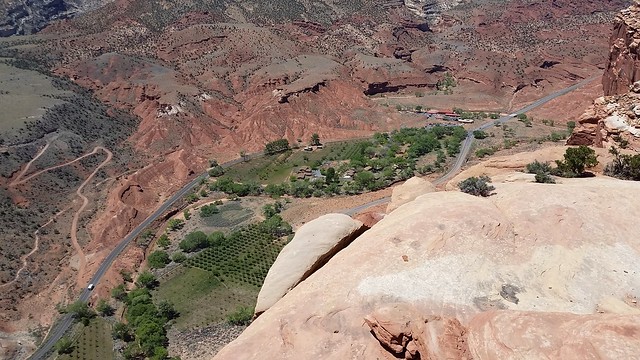 Many hikers turn around at this point.  But we were in it for the long hall and were determined to keep going.  From the Rim Overlook we could finally spot our destination, the Navajo Knobs, about a hundred miles (or at least that is what it looked to us) to the north.  The distance to the Knobs appeared to be a long way looking at them in a straight line.  But you can’t see the route the trail takes around a couple deep canyons and adds a considerable distance (and elevation change) to the hike. 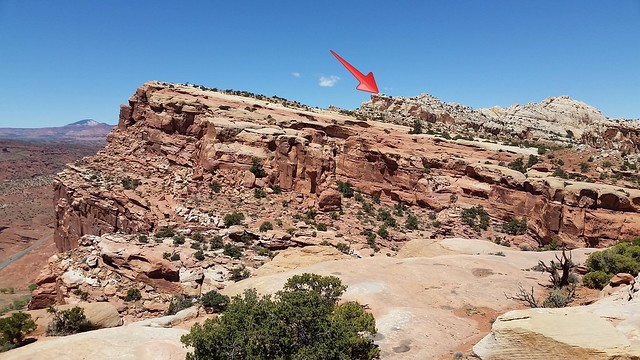 A distant look at the Navajo Knobs

The trail goes down as it winds around a deep canyon, then heads back up along a wide area of slickrock. 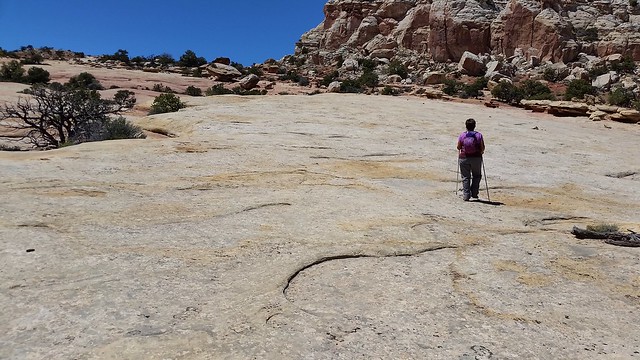 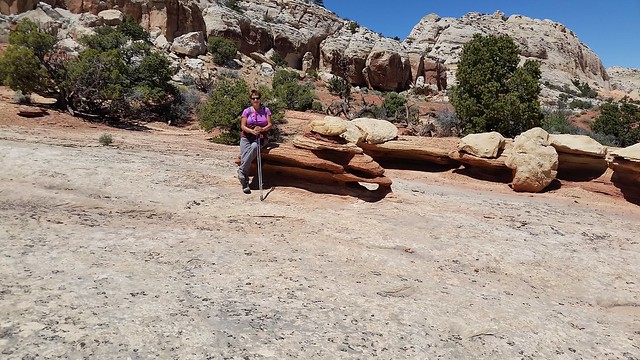 After hiking back up toward the next viewpoint we thought we were nearing the Knobs, but as they came back into view we learned that a long hike around another canyon was in our future.  At this point we had a great view to the west, with a formation called The Castle down below us.  The Castle is just north of the visitor center and looks pretty large from that viewpoint.  But it looked a little smaller from our perch high above it. 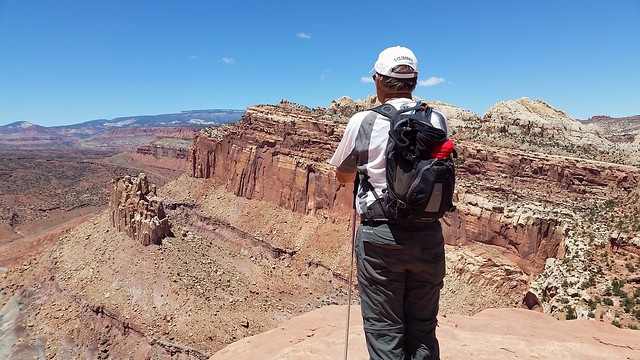 Looking down at the Castle

After hiking down and around the canyon (with great views of the Castle and rock formations to the south), we began the most difficult section of the hike, a 600 foot climb steeply up the slickrock. 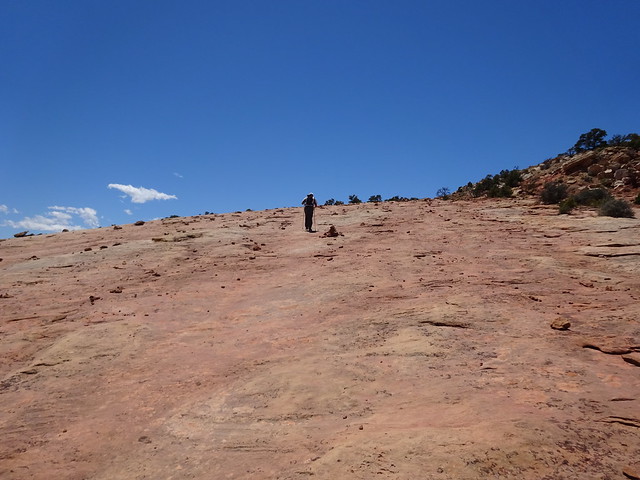 Once up and over the long climb we found one more canyon to go around before the final ascent to the top of the Knobs. 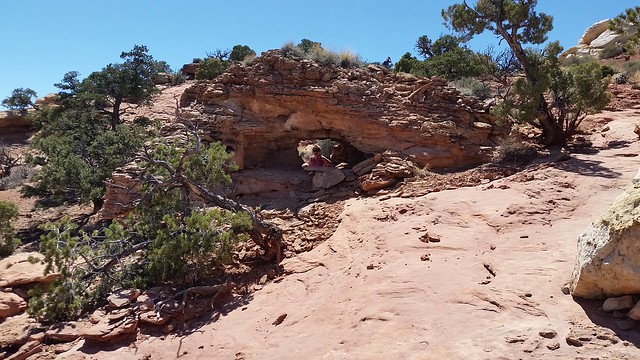 A cool hole in the rock (Oh no, photo-bombed again) 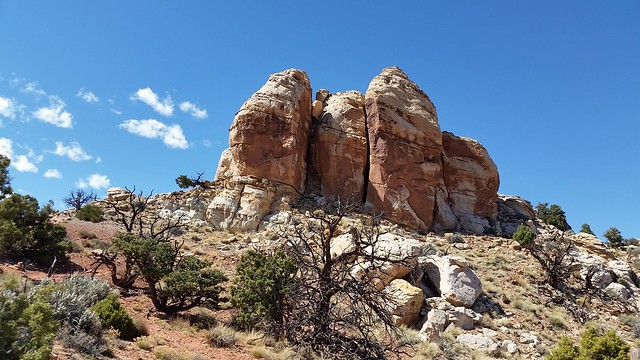 The Navajo Knobs at last!

At the base of the Knobs we began the final challenge, a 30 foot scramble steeply up to the top. 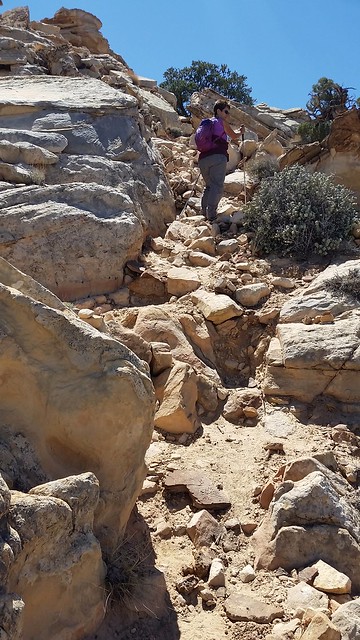 After the steep scramble, the trail then goes through a very cool and narrow opening in the rocks.  We went a few feet into the narrow passage and made a sharp right turn back out. 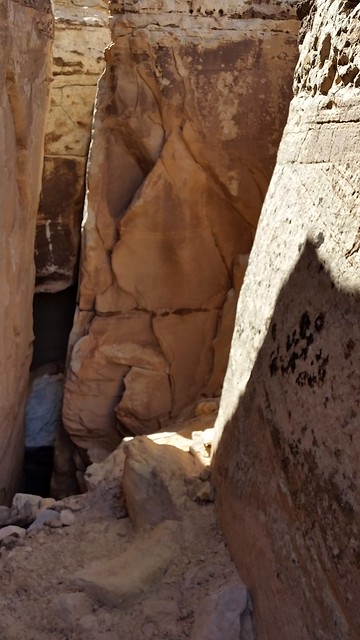 The first section of the passage 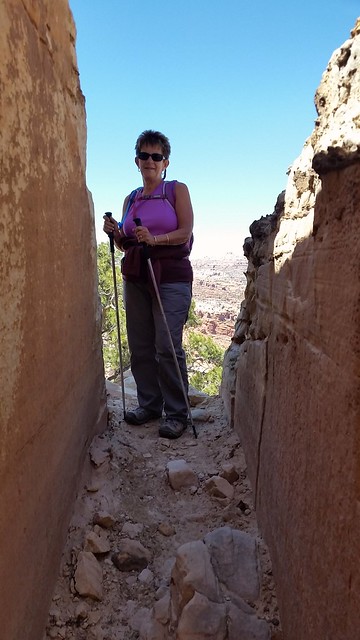 A sharp right turn leads back out

After going through the passage it is a short scramble to the top. 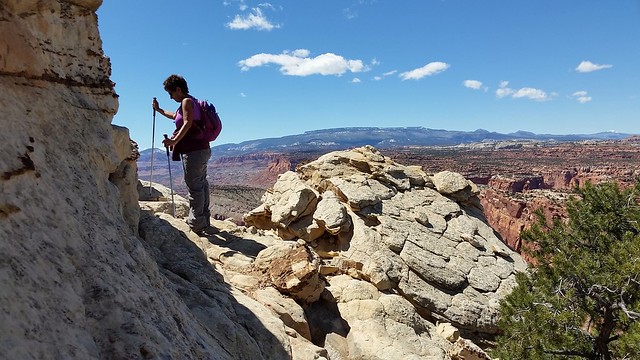 At the top there are two small, flat areas where you can sit (or stand) and take in the fantastic views.  There was another hiker sitting on the best of the two spots, but she invited us up to join her and we had a nice chat with her while we enjoyed the views. 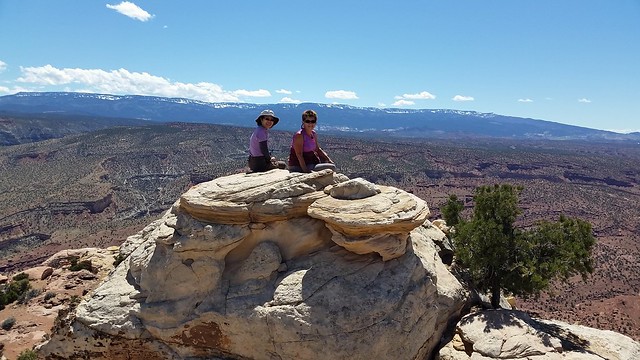 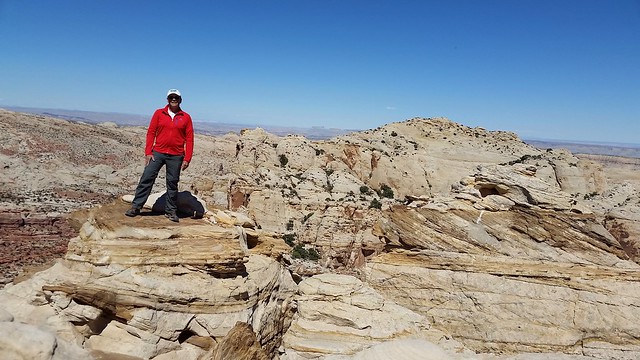 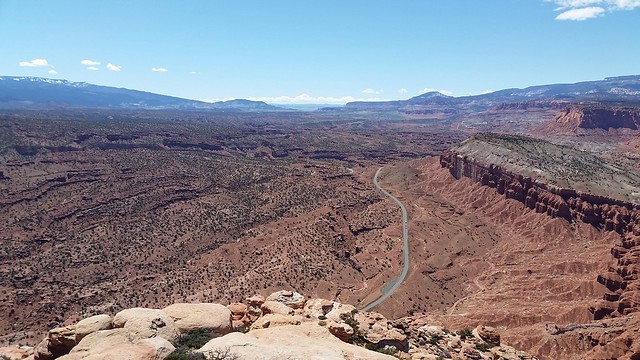 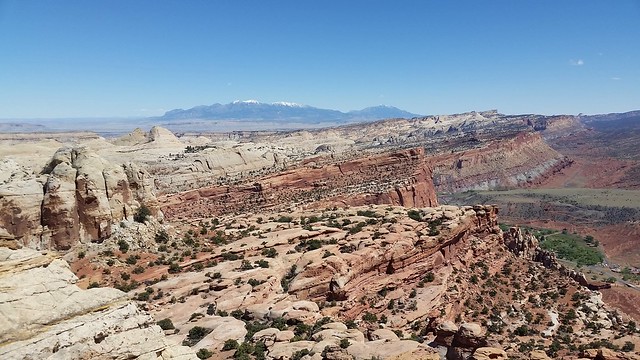 Looking to the east with the Henry Mountains in the distance 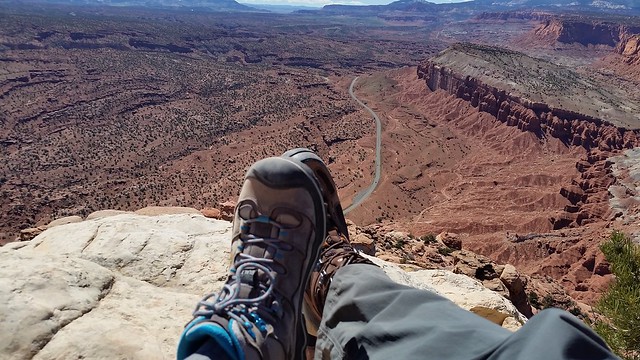 As we made our way back down off the Knobs we could faintly hear a voice calling out.  Instead of following the trail back to the east, we made our way around the other way toward the sound of the voice.  We could then clearly hear someone calling out for help.  After just a short distance we came upon the hiker we met at the top.  She had made a wrong turn and became confused when she couldn’t locate the trail.  Once we helped her locate the correct path she went on ahead of us, as she hiked much more quickly than us and needed to meet her husband at the bottom.

Once down from the Knobs we began the long descent back to the trailhead, enjoying more great views all around us and some neat rock formations we missed on the hike up. 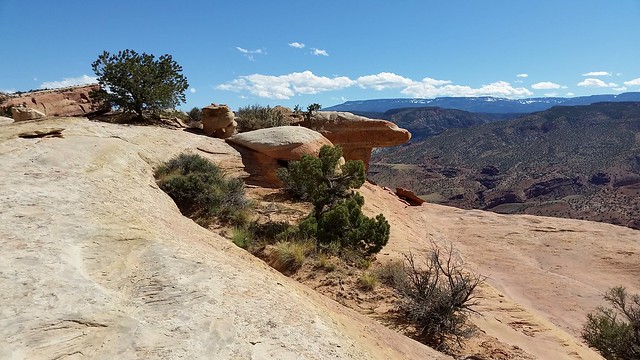 As we made our way back down the steep section of slickrock, we passed a young man going up the trail.  As we made the turn around the end of the canyon and headed back up the other side we spotted something on top of the Navajo Knobs in the distance. 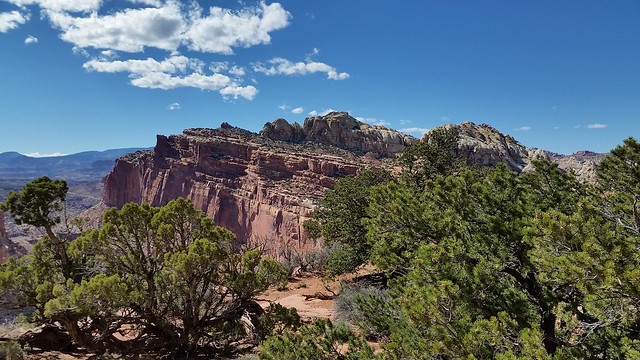 Looking back at the Knobs

A zoom photo revealed that the hiker we had passed was standing where we had been sitting during our visit to the top. 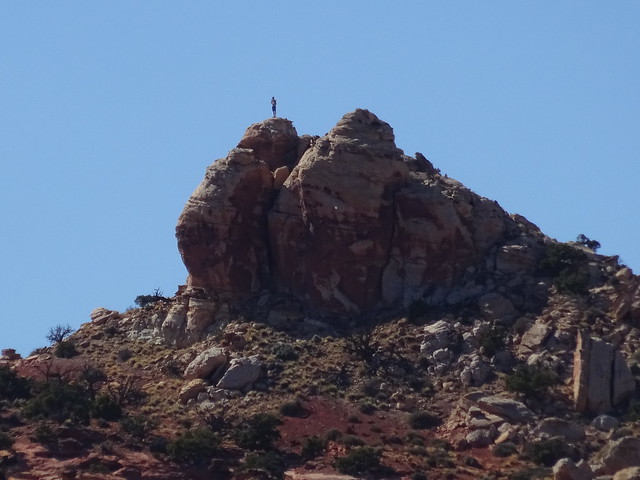 The return hike is, of course, almost all down hill.  But as we made our way around each of the large canyons we had to then climb back up to regain the elevation lost going around it.  With tired legs, the return was a continual challenge.  To add to the challenge John (apparently) failed to drink enough water along the way and began to feel dehydrated.  You would think with all the hiking we do he would know better, but a long descent on weak legs insure that he will not let that happen again.  He drank more water during the return hike, but if you have ever been dehydrated you know that once you feel its effects it is too late to correct it.

We returned to the parking area very tired, but pleased that we had met the challenge of the Navajo Knobs Trail.  Hopefully the nimble hiker will allow for a day of rest tomorrow!  More on that later . . .