The Waterpocket Fold is a large uplift of rock covered in Navajo Sandstone that runs for a hundred miles north and south in this area of Utah.  The fold is the major and defining feature of Capitol Reef National Park.  Grand Wash is a famous gorge that cuts its way through the upper portion of the Waterpocket Fold.  The wash connects the Scenic Road inside the park to UT-24 just east of Spring Canyon.  You can hike the wash from either end or, if you have two vehicles park one at one end and drive to the other.  We parked along UT-24 and made it an in and out hike of six miles.

The trailhead along UT-24

The hike is very flat as you are walking in a wash the entire length.  It is fairly wide at either end but gets a bit tight in an area called the Narrow, about half way from either end. 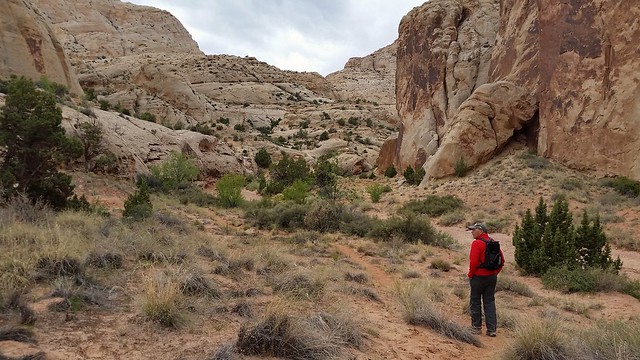 Open area along the first part of the wash

The sides of the wash contain many interesting rock carvings created by the flow of water and the winds that blow through the canyon. 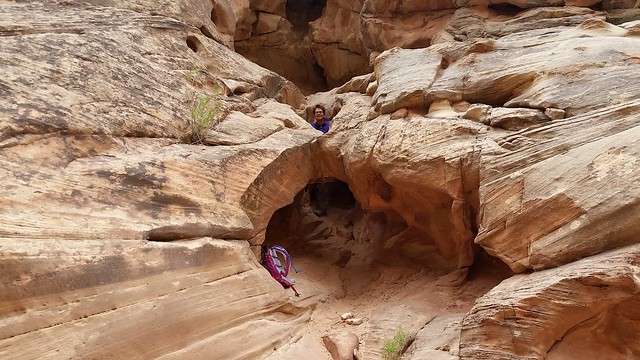 A young hiker photo-bombs our picture of a low arch 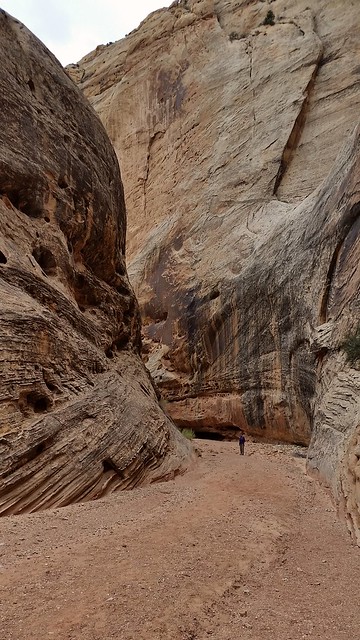 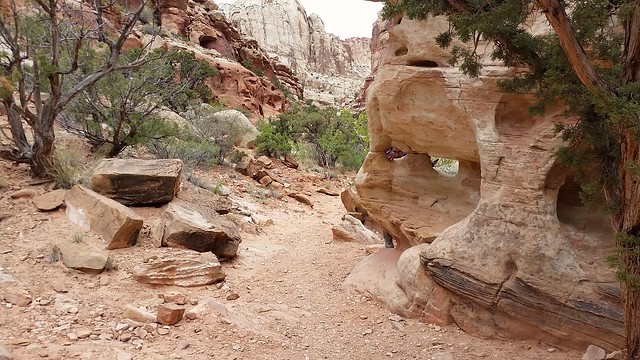 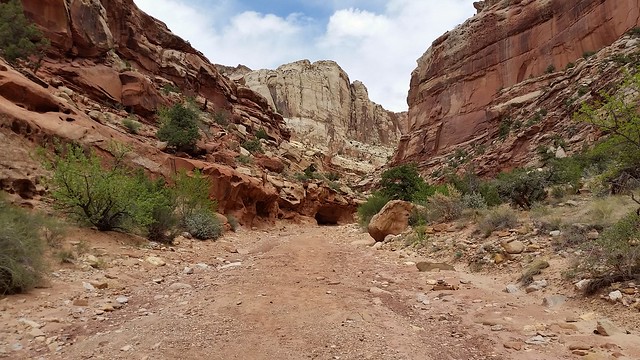 As we hiked back through the Narrow on the return trip we found the long vertical lines formed by rock varnish very interesting. 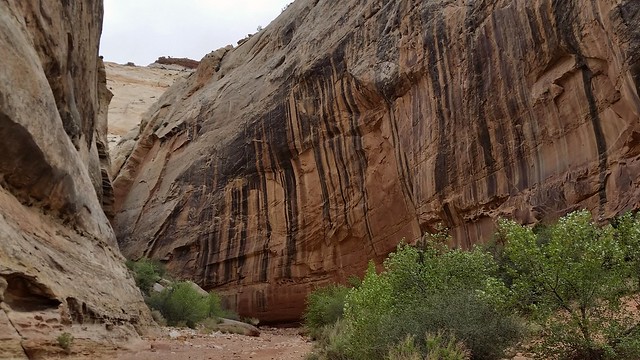 Also on the return hike back down the wash we spotted a small arch high up on the cliff.  We missed it on the hike up as it was on a turn in the wash that made it difficult to spot hiking in that direction.  The arch is an example of why we like to hike a trail out and back.  On the return hike you always see things differently than on the hike out. 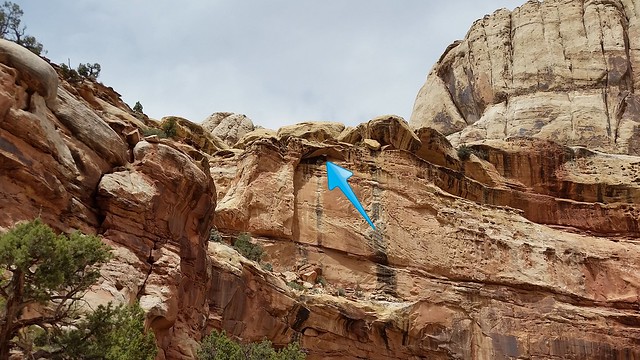 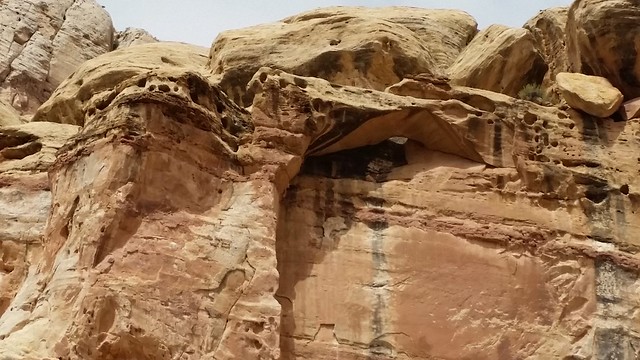 Along the walls of the wash there are numerous cuts where water has eroded a path through the rock.  Some of these cuts are quite wide at the base and form narrow tunnels up into the wall. 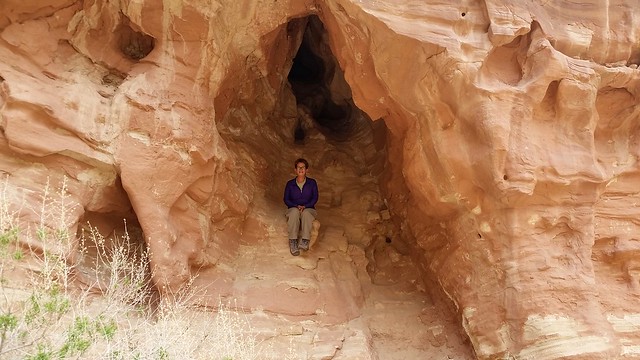 A cut in the canyon wall (Oh, photo-bombed again!)

In the wider areas of the wash large boulders have fallen from the canyon walls.  The soft sandstone has eroded, creating interesting holes and patterns in the rocks. 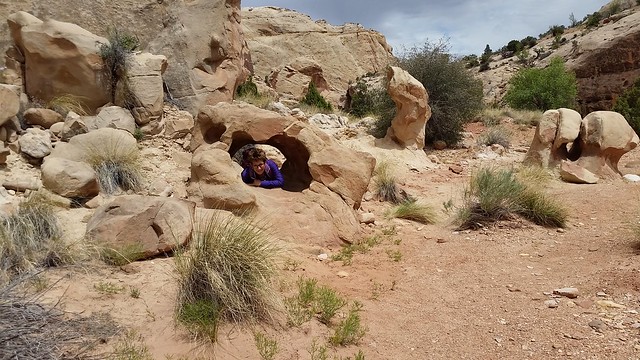 As we neared the trailhead in a wide section of the canyon we hiked on a narrow trail running along the wash.  Just before the trail exited back into the wash we spotted a short section that ran up to the side of the canyon.  Turns out it lead to a small section of artwork partially hidden by a boulder. 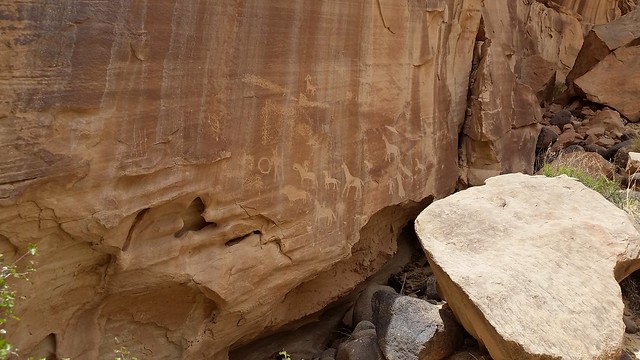 We had no idea there was any artwork along the wash and were surprised to find it. 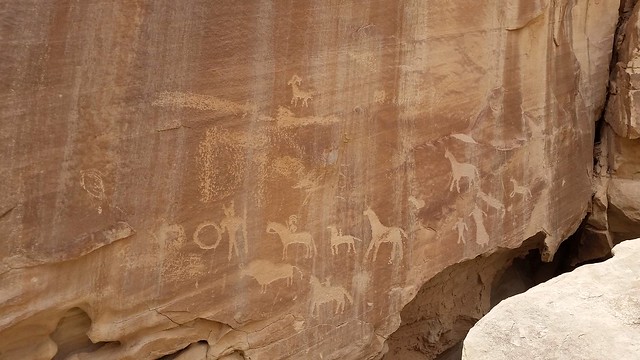 Grand Wash is a nice hike for any level of hiker.  While it is not a difficult hike, you can go as far as you like and still see something of interest.