A Visit to Fisher Towers – Moab

For our final adventure for this visit to Moab, we decided to go out to Fisher Towers to see if anyone was making the climb up to Ancient Arts, one of the rock features there.  Ancient Arts was featured in a CitiBank commercial a few years ago (click here to watch it) and it makes you dizzy just to watch.

Fisher Towers is located about 20 miles north of Moab on Rte. 128.  A sign along the highway clearly points out the dirt road leading to the trailhead.  The trail itself is about two and a half miles one way and presents some challenging up and downs, but nothing any level of hiker couldn’t do.  We have hiked the entire trail twice during past visits, so for this trip we decided to just hike out a mile to where you can see rock climbers in action. 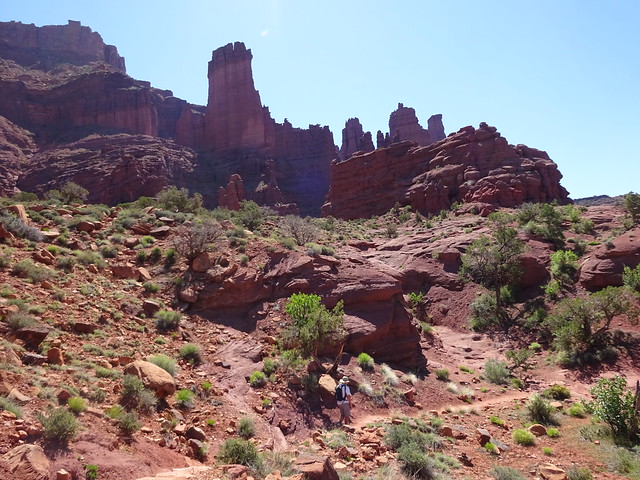 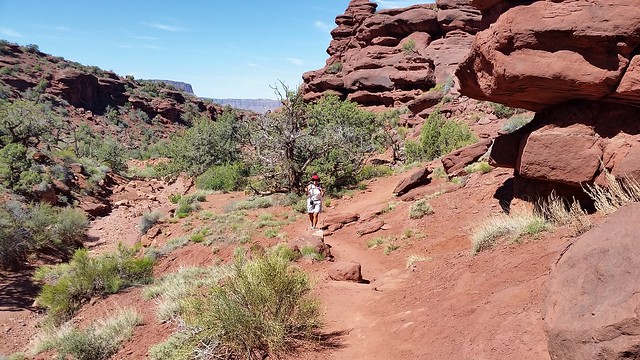 After a moderate hike up and down through a couple of washes, we came to the spot at the base of where the rock climbers head up to the point called Ancient Arts. 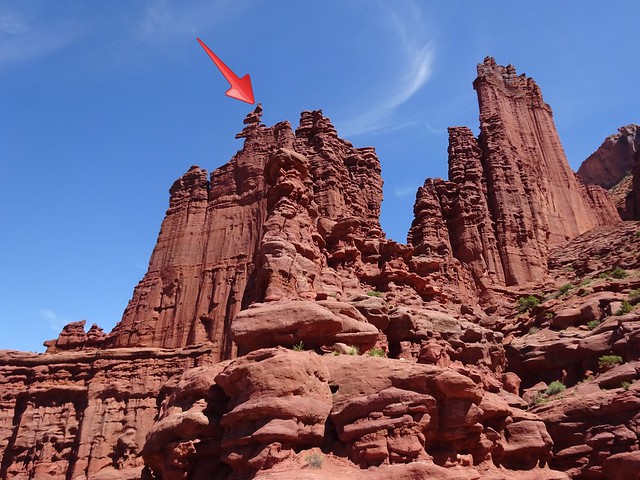 Looking up at Ancient Arts

We were in luck as there were two girls just below the summit and one of them was headed to the top (only one person can go up at a time). 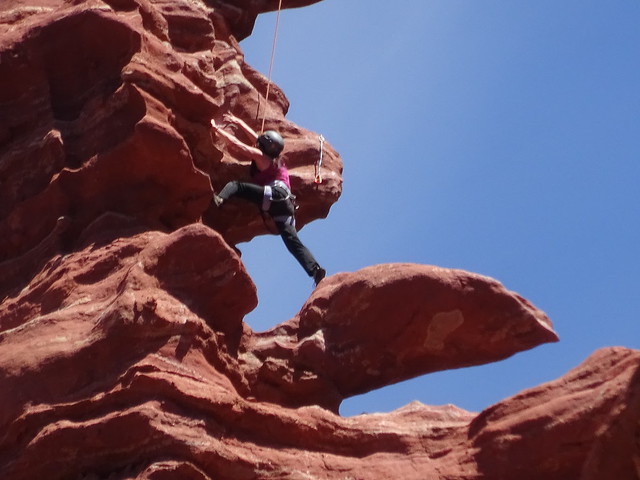 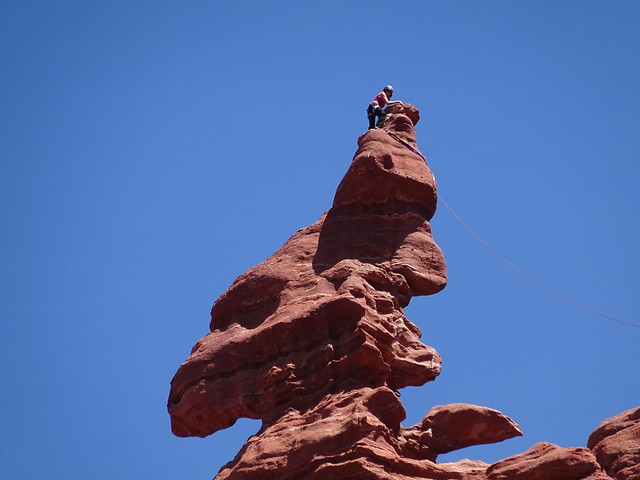 The climber reached the top and sat while waving to climbers below.  They encouraged her to stand up but she declined the offer.  We have seen others stand on one foot while at the top but we didn’t question her courage as we were dizzy just watching her from the base of the rocks! 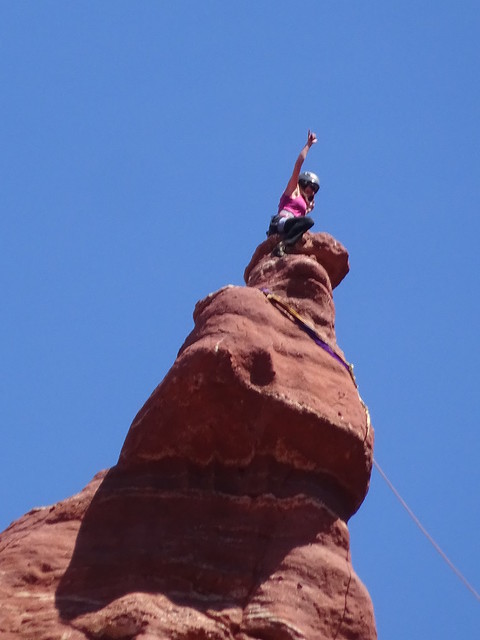 After a brief stay at the top she headed back down using the ropes to rappel to a spot where her climbing partner was waiting. 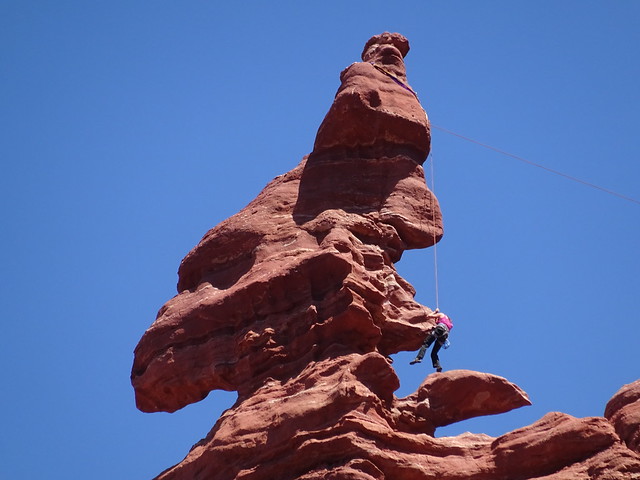 Then, one at a time the two made the long rappel down the face of the rocks. 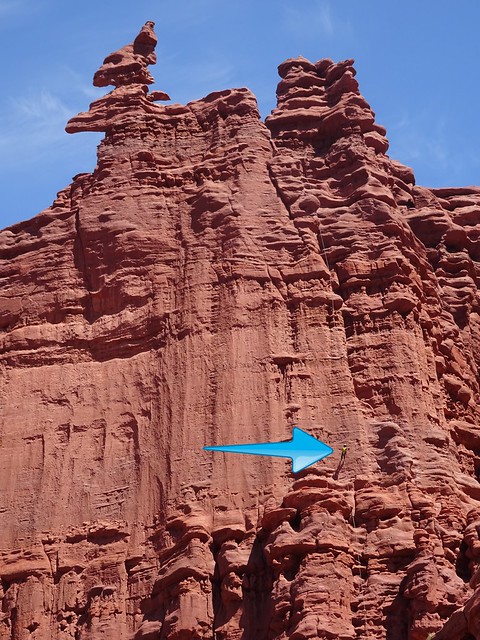 Can you see the climber coming down the wall? 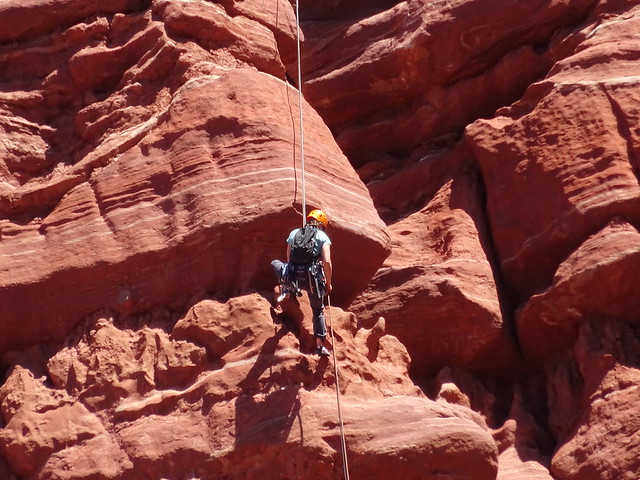 A zoom photo shows the climber pictured above

Some beautiful cloud patterns added to the beauty of the area. 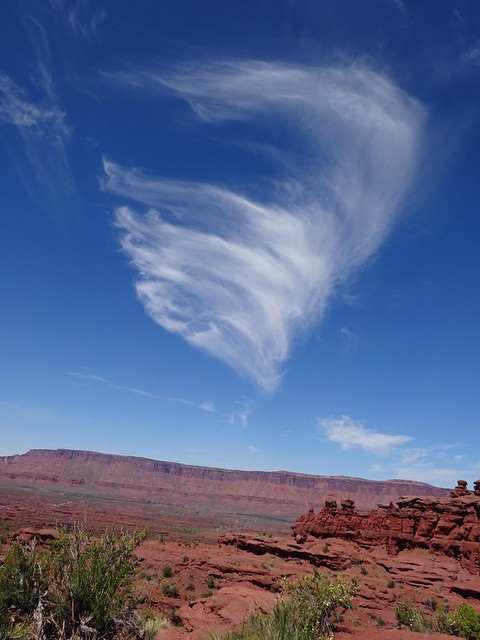 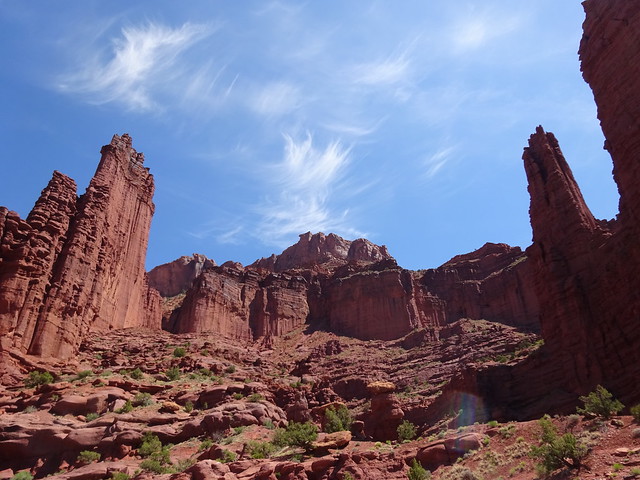 After almost five weeks in Moab it is now time to leave this beautiful area and head on down the road.  Although we have explored many, many great places in the area, there are still many spots we want to visit, so we’ll definitely return next year.

But now it’s time to head west about 150 miles to the little town of Torrey for a return visit to one of our favorite national parks, Capitol Reef NP.  More on that later . . .

24 Responses to A Visit to Fisher Towers – Moab