Short Hikes and Hanging with Friends

The weather for the last few days has been uncharacteristically cool and rainy in eastern Utah, keeping us from doing much in the way of exploration.  But we have been able to sneak in a couple of short adventures between the clouds, wind, and rain.

One of those short excursions was a drive out to see a couple of arches just south of Moab.  To get there we drove south on Rte. 191 thirteen miles from Center Street in Moab.  At the top of a hill we turned right on to a fairly smooth dirt road.  After 5.4 miles on the dirt road  Lone Rock (also called Prostitute Butte) came into view. 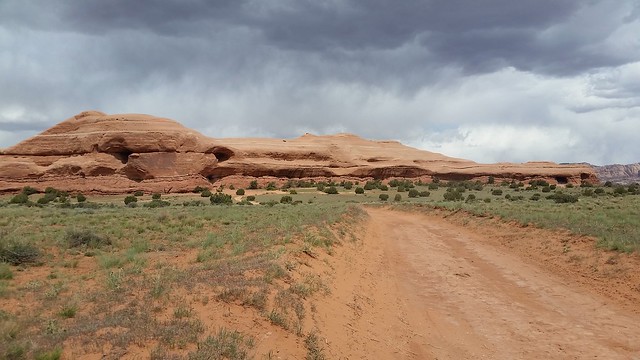 We turned off the main road and drove right next to Lone Rock and under Balcony Arch. 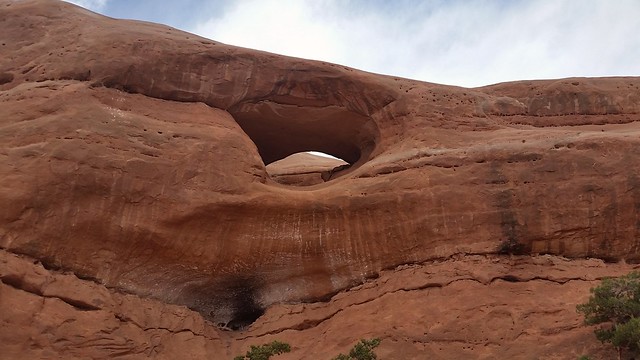 Continuing on the narrow dirt road we drove around Lone Rock and quickly arrived at Picture Frame Arch. 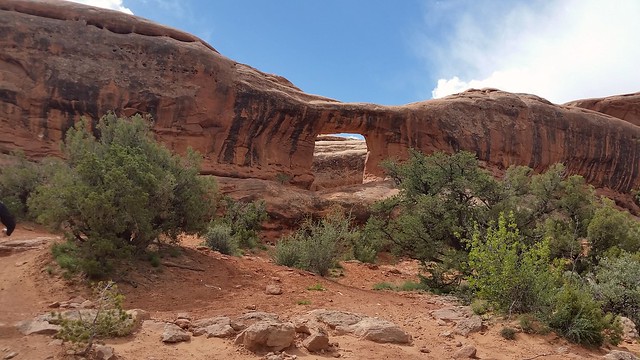 With a little bit of scrambling John was able to climb up on to a shelf and get inside the arch. 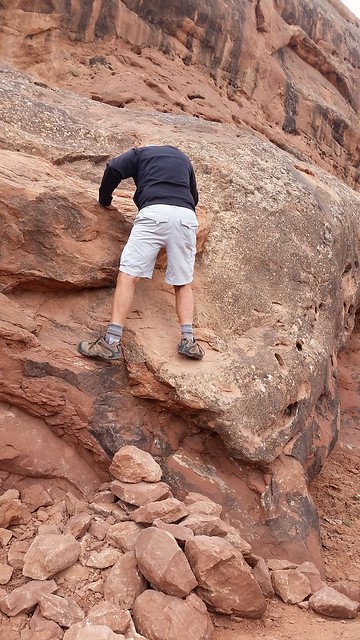 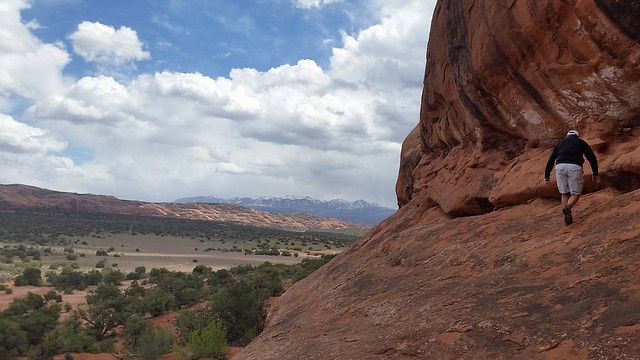 The view from behind the arch gives it the name Picture Frame, as the arch provides a nice frame to the scenery in the distance. 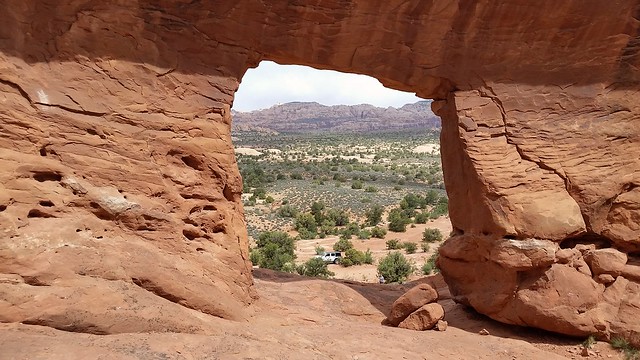 As we returned to the Jeep the wind became stronger and dark clouds began to roll in, so we ended our brief adventure and made our way back to town.

A couple of days later the skies cleared a bit (at least for part of the day) so we headed out for another brief period of exploration near town.  About a week ago a volunteer at the visitor center had given us directions to two places in the Moab area (Bartlett Slickrock and pictographs on Kane Creek Road) by drawing a crude map on some scratch paper.  We returned to the visitor center earlier this week to thank her and let her know we had found both locations.  Again, she drew a map on a piece of scratch paper to a location in the nearby Sand Flats Recreation Area where you could get a nice view of some nearby canyons.  And again, her directions were right on!

We drove to the east side of Moab and headed east up Mill Creek Road, which soon turns into Sand Flats Road.  There is a five dollar per vehicle entrance fee to continue up the well maintained dirt road into the Sand Flats Recreation Area, a huge area made up of mostly slickrock and filled with ATV/Jeep, mountain bike, and hiking trails. 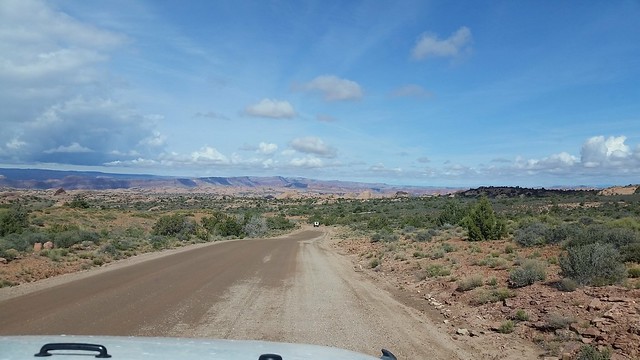 We drove 4.3 miles past the entrance gate, through a narrow channel in the road, and parked along the left side of the road. 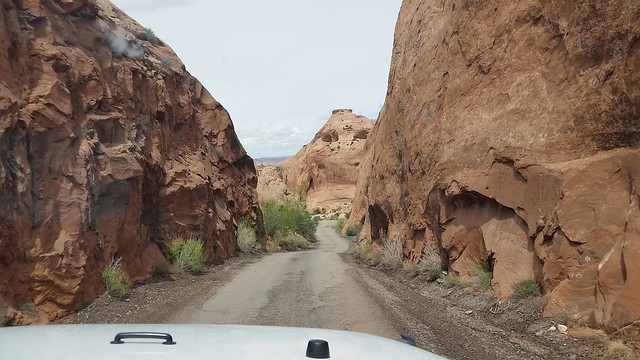 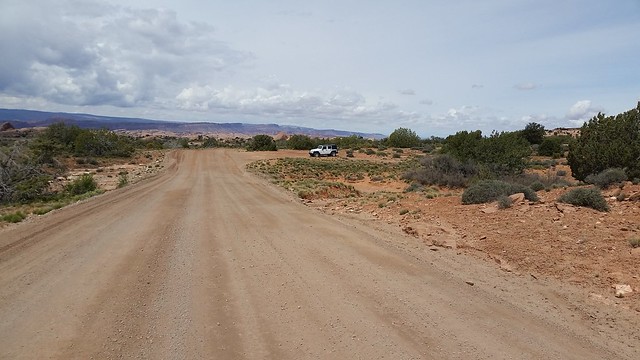 Looking back at the small parking area (on the right in the photo, on the left as you drive to it)

After parking the Jeep we walked just a short distance up the main road and turned right on to a narrow, little used side road. 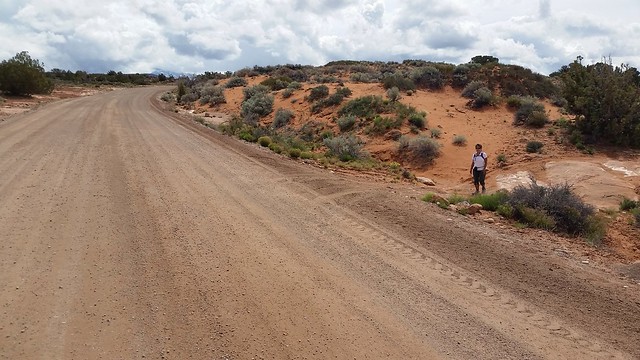 Less than a mile out the old road, a large outcropping of slickrock came into view.  We decided the top of the rocks would be our destination. 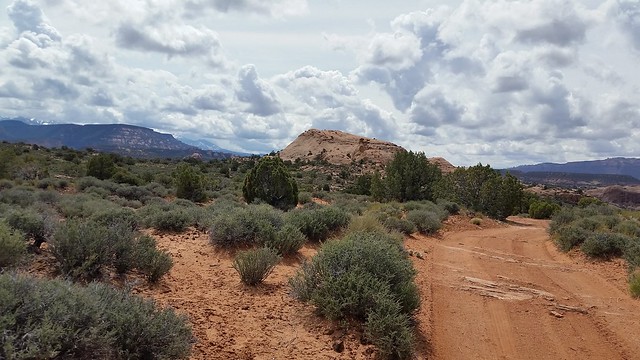 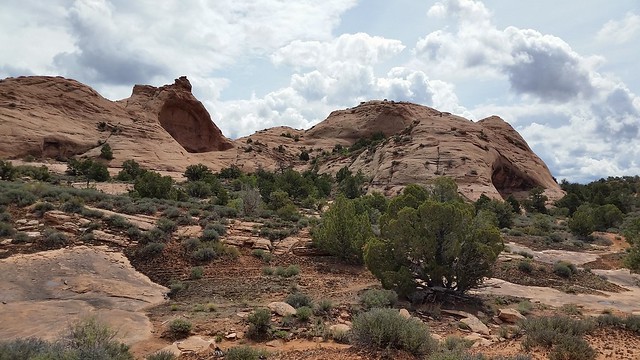 We found a narrow path leading to the base of the rock and began our ascent. 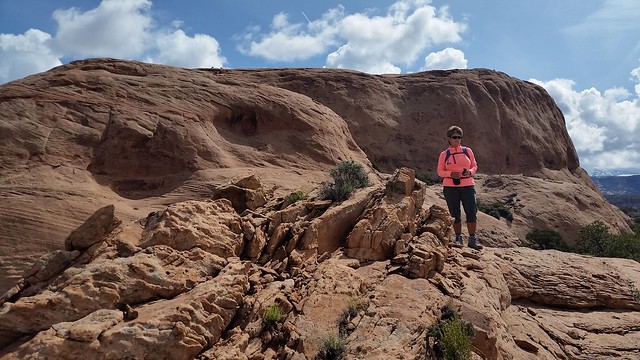 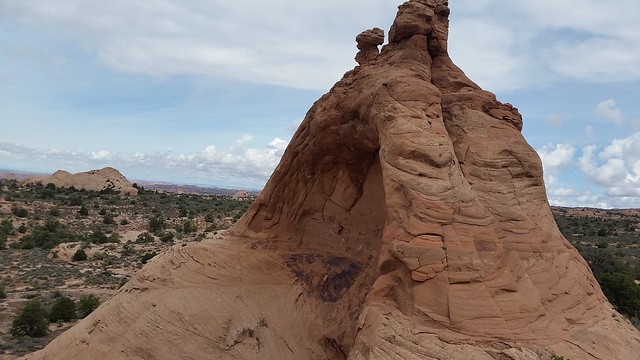 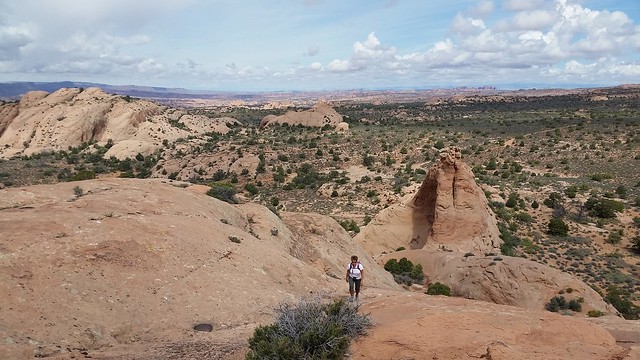 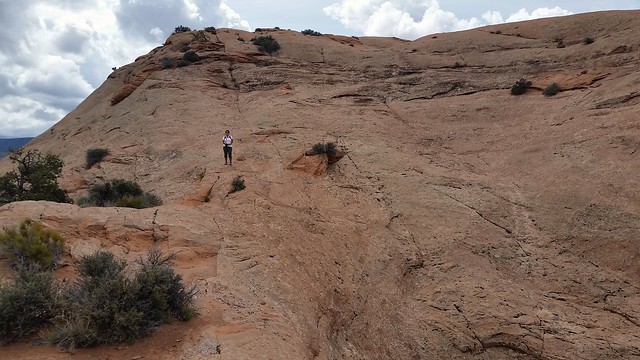 The top of the rock had a great 360 degree view of the Moab area. 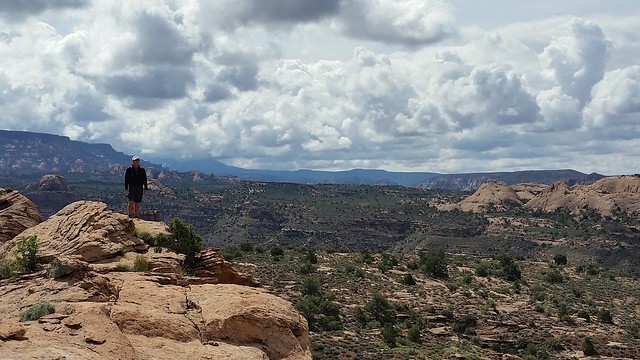 A number of fellow gypsies are staying in the Moab area, so one night we all got together at a local restaurant to share a meal and some conversation.  Dave and Sue (Beluga’s Excellent Adventure) and Steve and MonaLiza (Lowes RV Adventures) are staying in the same park as us.  Tim and Amanda (Watsons Wander) are dry camping in an area north of town and have been joined there by Amanda’s parents.  Hector and Brenda (Island Girl Walkabout) just arrived in the area and are also dry camping north of town. 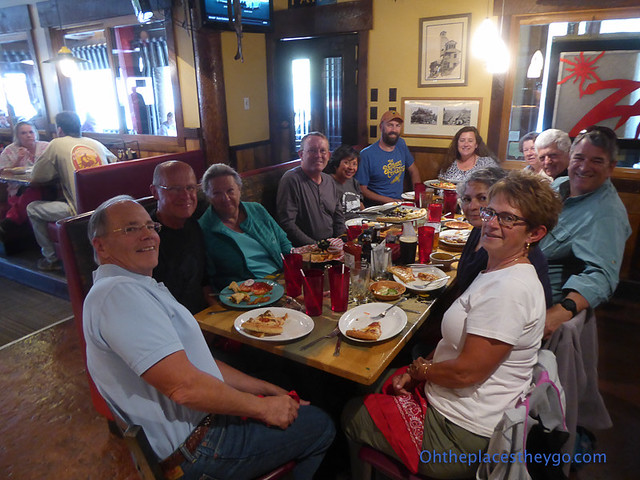 A couple of days later we had a happy hour/dinner at Steve and MonaLiza’s site.  Hector and Brenda came over to our park and Joe and Gay (Good Times Rollin), who are also here in the park, joined the group.  We enjoyed some snacks, drinks, conversation, and two of MonaLiza’s Filipino specialty dishes (Lumpia and Pancit).  Both dishes were delicious! 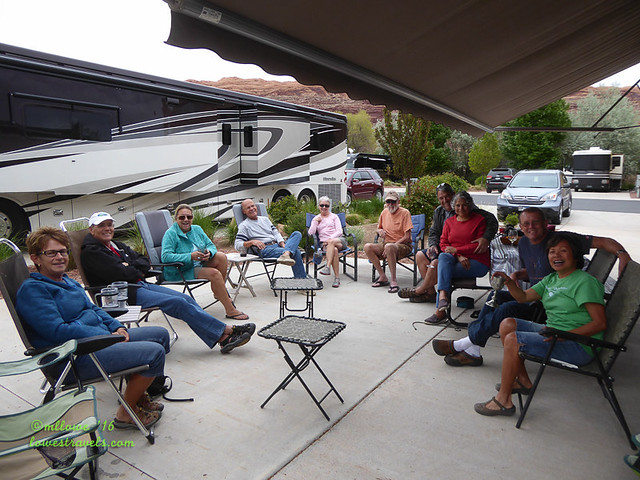 We were scheduled to leave Moab this Sunday and move on to Torrey, Utah outside Capitol Reef NP, but have altered our plans due to the weather.  Rain is predicted in both locations for the next few days and since Torrey is at over 6,000 feet there is some snow expected there.  We were able to extend our stay here (we’ll need to move to another site on Sunday) until Friday when the weather is predicted to be much better.  We love Moab so staying put another few days is certainly no problem for us.

26 Responses to Short Hikes and Hanging with Friends