On Wednesday we set off early (for us) with Steve and MonaLiza (Lowe’s RV Adventures) to hike the rim trail in nearby Dead Horse Point State Park.  They don’t have a high clearance vehicle so we offered to drive and go up Long Canyon, a road we have done a number of times (see the Lathrop Canyon post from last week). To get to Long Canyon Road we drove north on Rte. 191 and turned left on to Rte. 279 (Potash Road), which runs right along the Colorado River on the left with a high cliff on the right.  About 13 miles up Potash Road we turned right at the Jug Handle Arch on to Long Canyon Road. 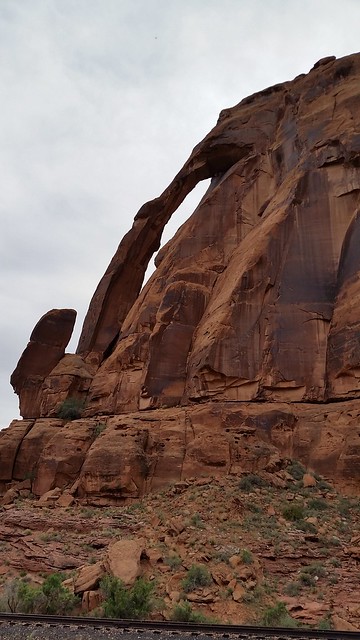 If you read the blog we did last week on the Lathrop Canyon when we also drove the Long Canyon, you may remember the road going under a huge boulder.  We found that, yes, it was still there (thanks MonaLiza for the photo). 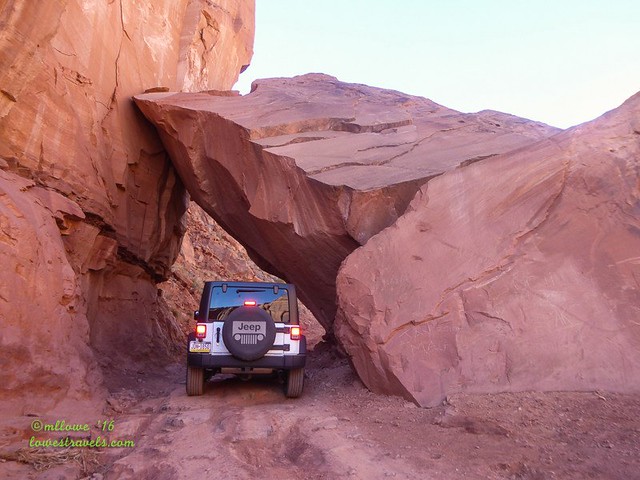 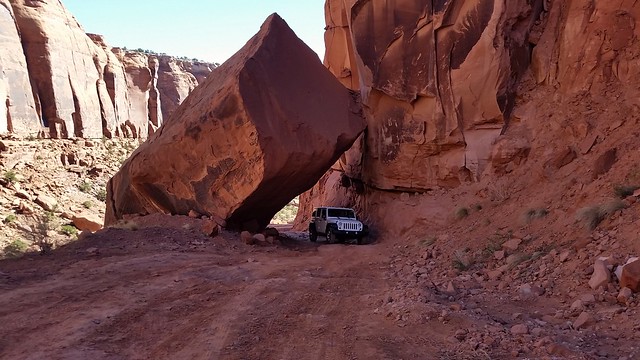 You may also remember we said that in past drives up Long Canyon we found the road to be passable with most vehicles, but this year the area just above the boulder was in bad shape.  Apparently a Subaru Forester tried to drive the road but had some problems. 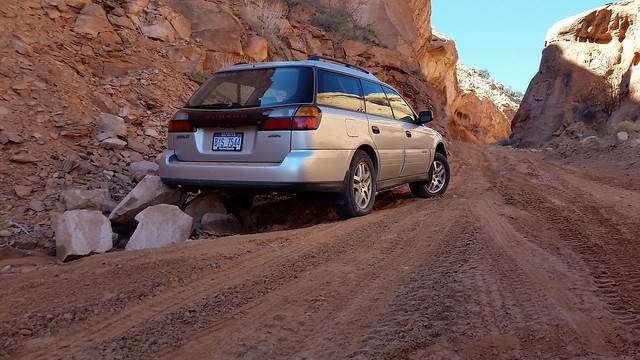 It looked to us as if the driver decided to back up with the intent of turning around, but drove a little close to the inside edge.  The car was abandoned, so apparently they didn’t have AAA towing. 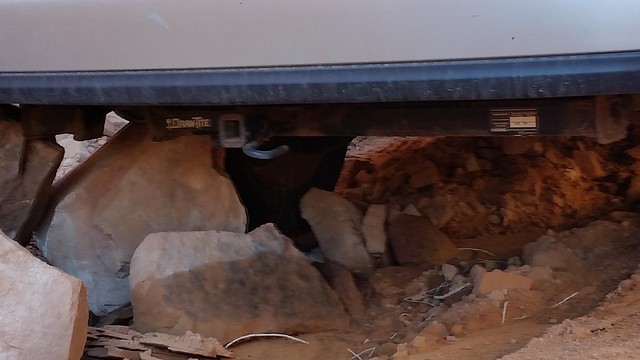 Someone’s a bit “hung up”

We continued up into an area known as “Pucker Pass” where last week we needed to use four wheel drive to get past a rough area. 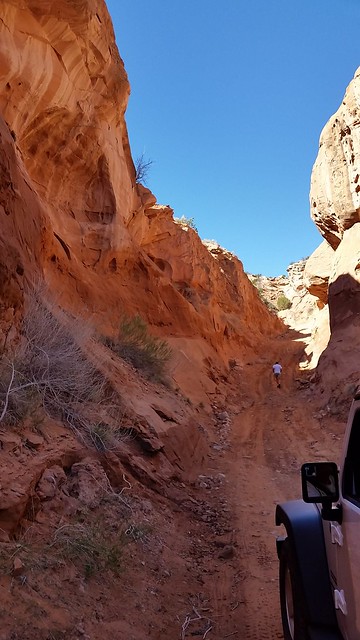 Looking up Pucker Pass (Steve goes ahead for photos)

Well, in the past week the road continued to deteriorate as more vehicles spun tires in the rough sections, creating deeper holes to drive through.  This trip we needed to use the low range feature of the Jeep, the first time we have ever needed it.  The Jeep walked right up through the two obstacles.  With the continuing deterioration, we will not be driving Long Canyon again during this visit (unless we hear they repaired this section). 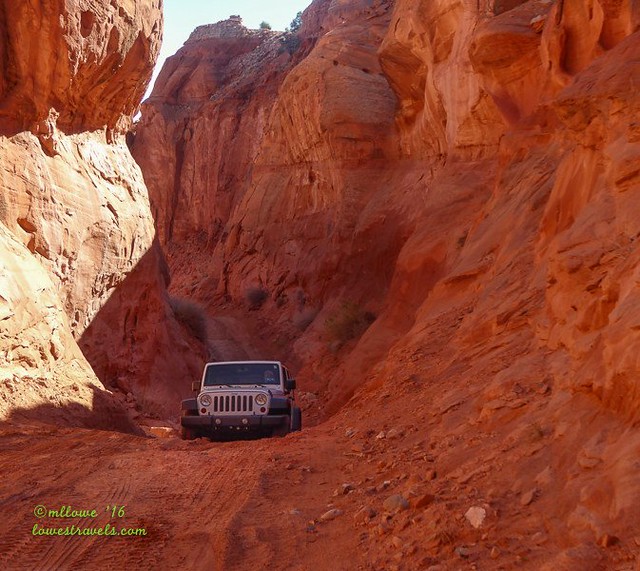 The Jeep gives everything it has and does a great job!

Just a half mile past Pucker Pass we reached the top of the mesa and headed into Dead Horse Point State Park. 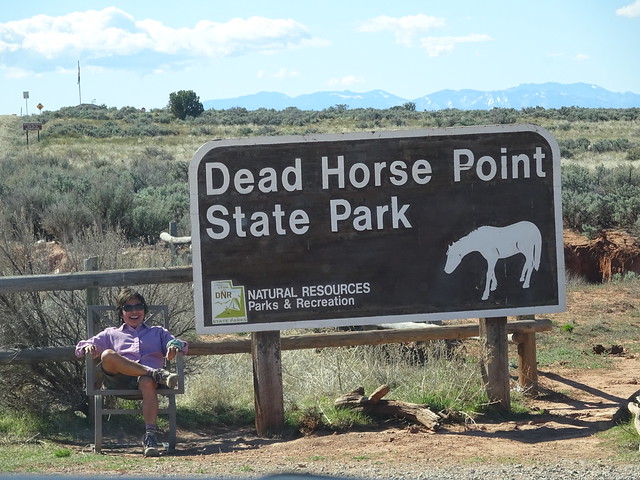 The park’s entrance attendants are a little laid back 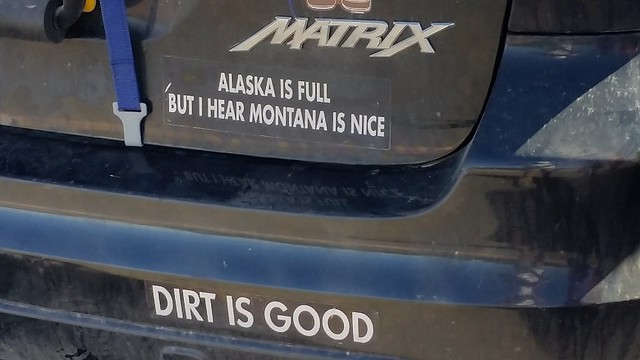 After stopping by the visitor center we headed out on the East Rim Trail, which goes out to the point with great views along the way. 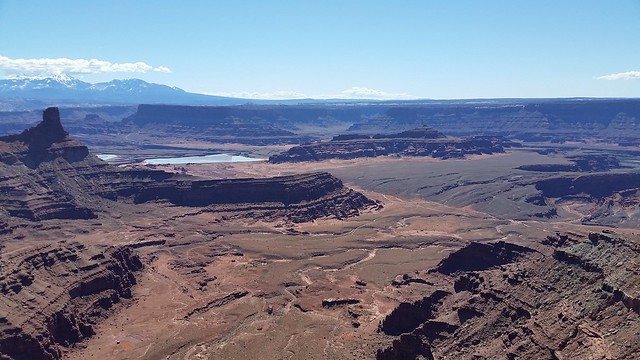 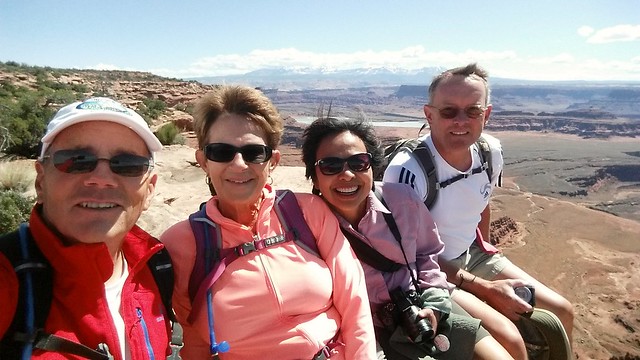 Soon we came to the narrow neck of land that leads out to the “point” of Dead Horse Point State Park.  The “point” is a mesa surrounded by sheer cliffs 2,000 feet high with only a narrow neck of land 30 yards wide connecting the mesa to the main plateau.  This made it easy for cowboys in the late 1800s to use the point as a natural corral to keep rounded up wild horses from running away by simply fencing off the narrow neck.  One legend has it that one group of horses was inadvertently left fenced in and eventually died of thirst.  A variation in the legend says that the fence was taken down, but the wild horses would not leave the point and eventually died of thirst. 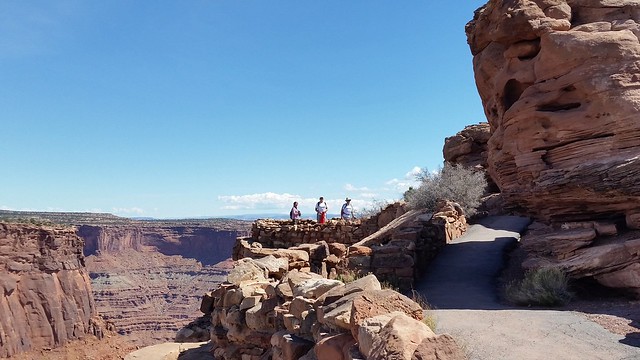 A viewpoint out on the point 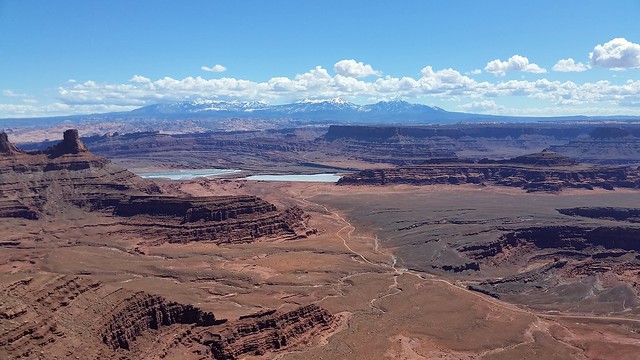 The narrow ribbon below is our route home, the Shafer Canyon Road

The trail goes all the way around the rim of the point, providing great vistas in all directions. 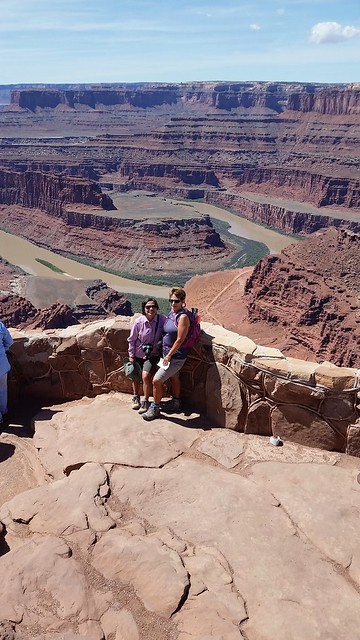 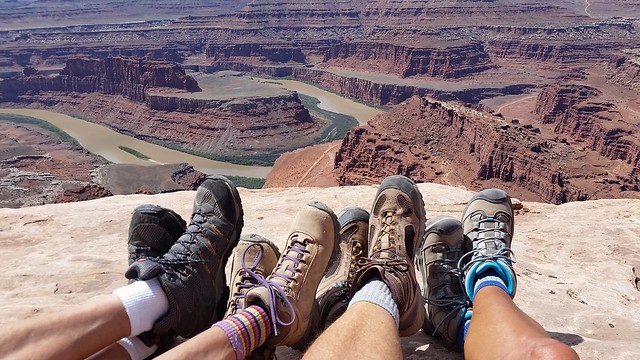 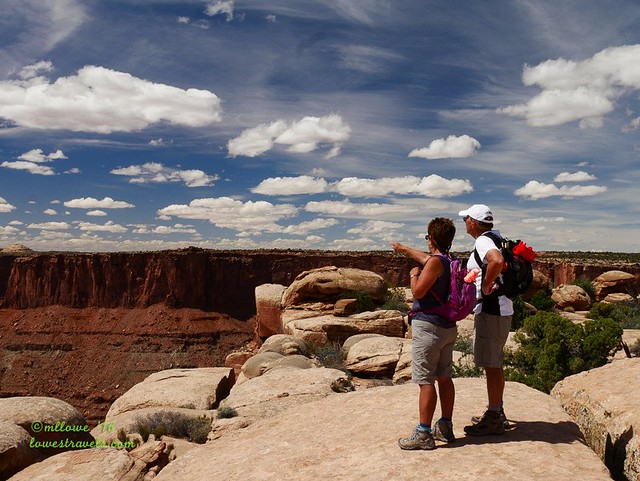 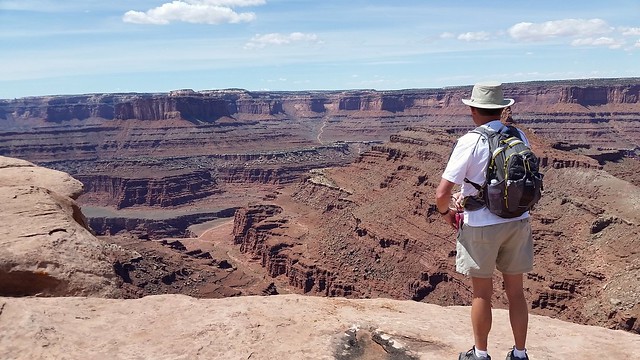 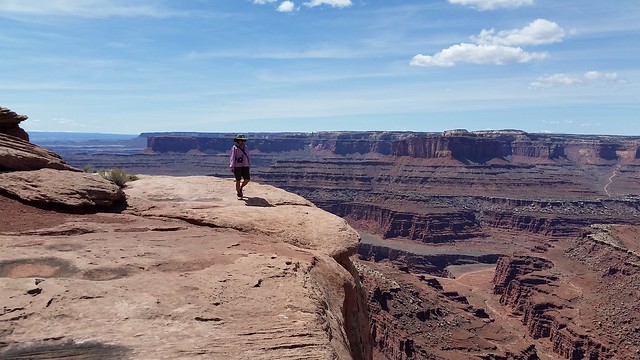 After following the trail around the point and along the rim of the canyon we hiked back across to the other side of the mesa and returned to the visitor center. 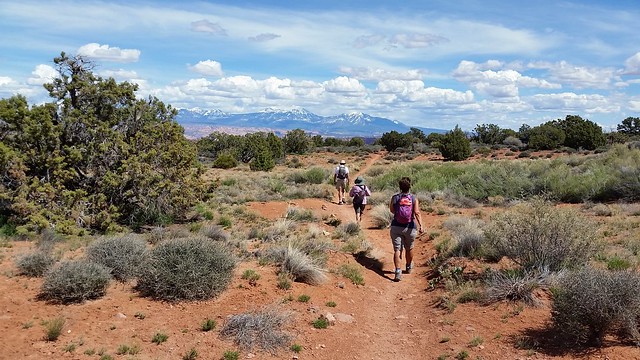 Returning to the Jeep we drove into Canyonlands NP and turned on to the Shafer Canyon Road.

On the canyon rim along Shafer Canyon Road

As we meandered along the Shafer Canyon Road we could see our lunch spot at Dead Horse Point State Park far above us. 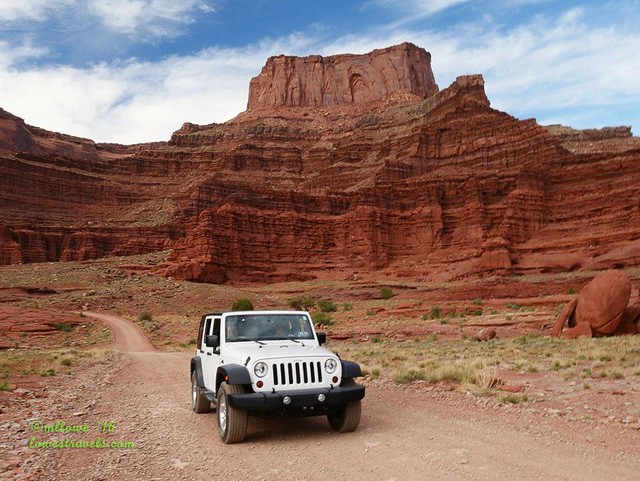 After a long day (over nine hours) of dirt roads and hiking, we returned to Moab tired and hungry.  The reward for all this effort was a great oatmeal stout and a burger at the Moab Brewery.  A great reward for a great adventure!