For today’s hiking adventure we decided to go into Arches National Park and re-do a hike we did three years ago with Steve and Joan (FOSJ) to Tower Arch.   We drove out Arches Scenic Drive almost to the end and turned south (left) on to a dirt road called Salt Valley Road, a smooth road suitable for any vehicle.  After about seven miles there are two turns to the left very near each other.  We took the second left and drove about a half mile to the trailhead. 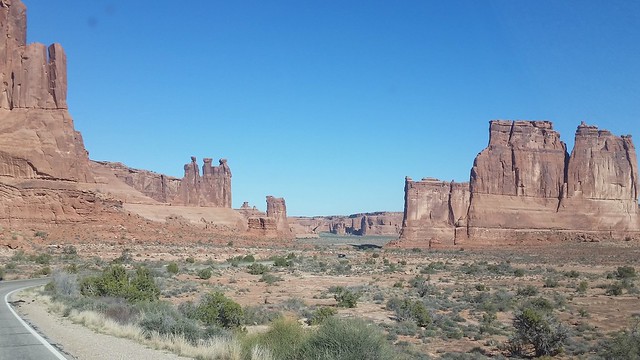 The drive through Arches is always stunning

This hike is rated as moderately difficult.  The most difficult part is the first quarter mile, which goes steeply through the rocks up the side of a bluff.  Last time we did this hike we got a bit confused in this section, but now the trail is clearly marked with large cairns. 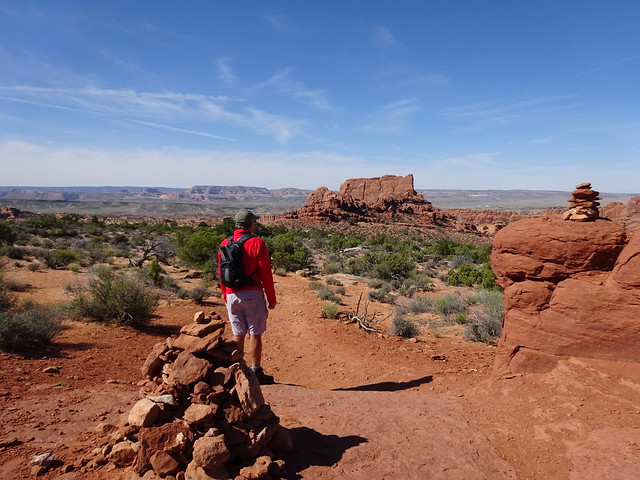 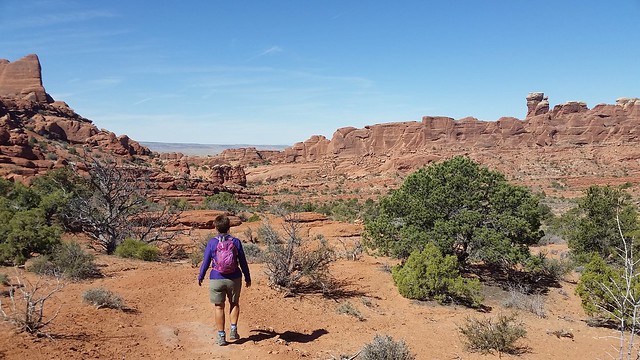 When we finished climbing up the bluff, we immediately hiked down into a valley which was followed by a couple steep climbs up deep, sandy dunes,  which really got the blood flowing! 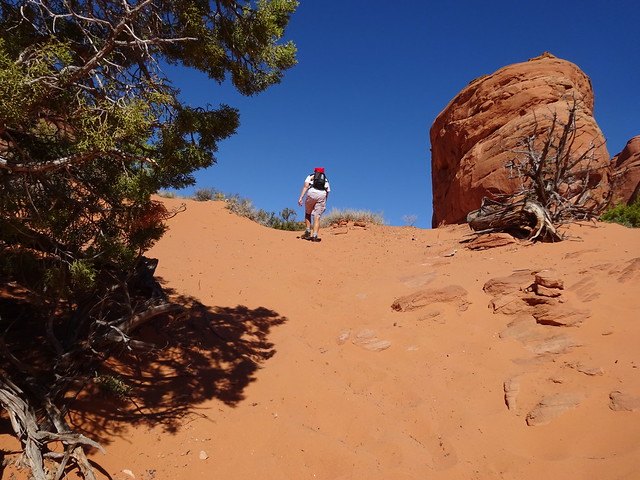 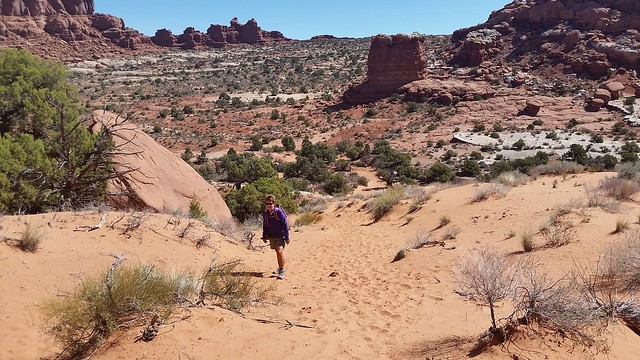 After about a mile and a half we entered a sandstone rock area that indicated we were nearing our destination, Tower Arch.  Soon the “tower” part came into view. 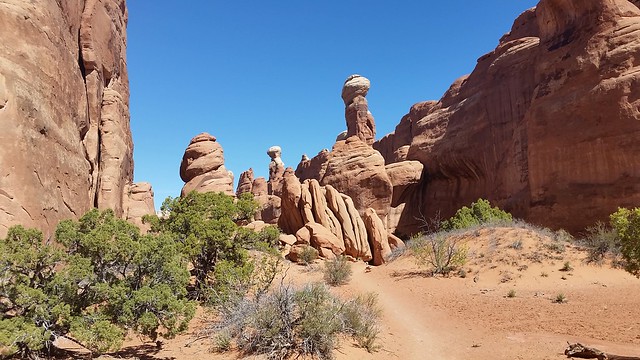 It wasn’t long before we got a clear view of both the tower and the arch. 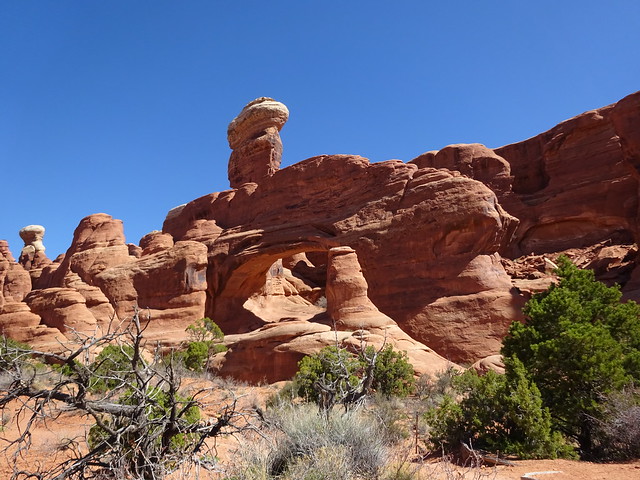 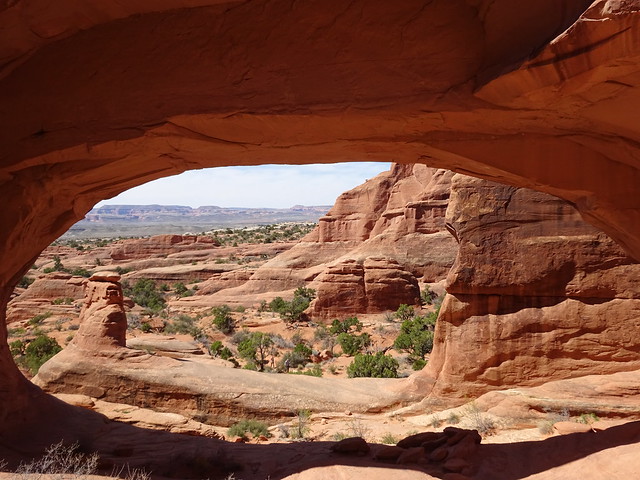 The view from inside the arch

We did a bit of rock scrambling to get up on a ledge behind the arch. 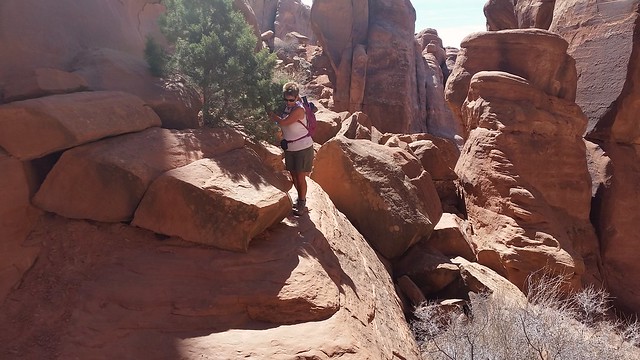 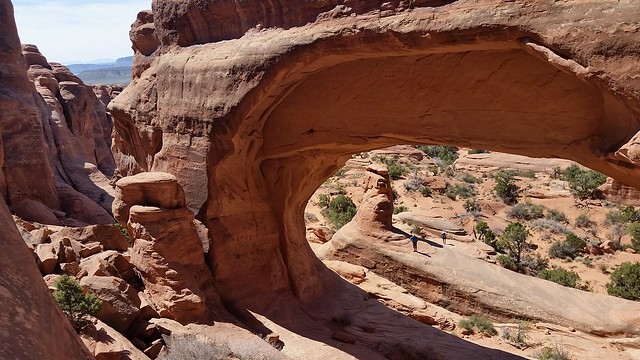 The view from above and behind the arch

Some hikers we spoke with said that if you climbed up a steep rock fin behind the arch there were some neat things to see. 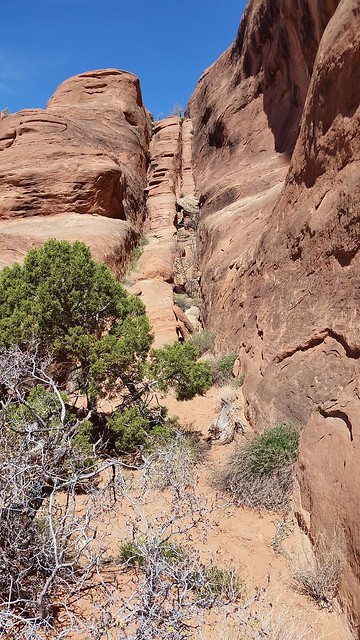 The rocky fin above the arch

Always ready for a challenge, up the fin we went! 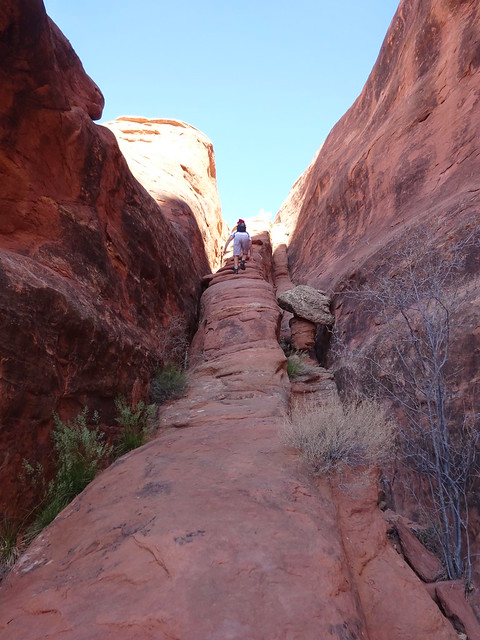 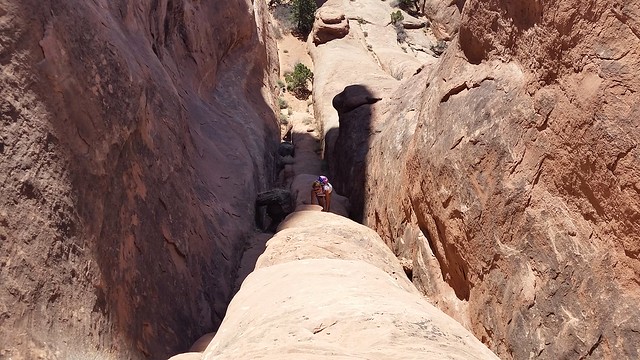 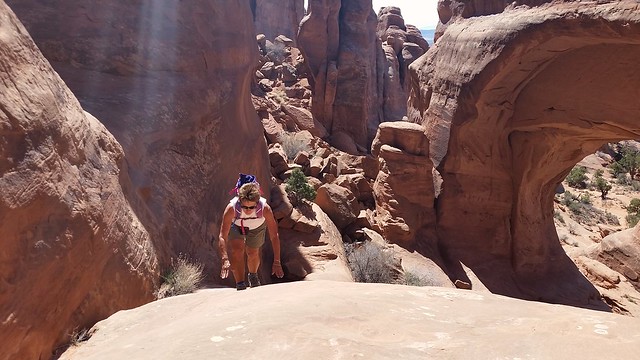 The nimble hiker performed magnificently on the ascent, although there was some nervous shaking going on!  Once up that fin we had to climb down a shorter one into a small area.  After exploring that area a bit we decided not to go up any further and began the trip down.  But first we had to go up the shorter fin, which required some “reverse crab walking”. 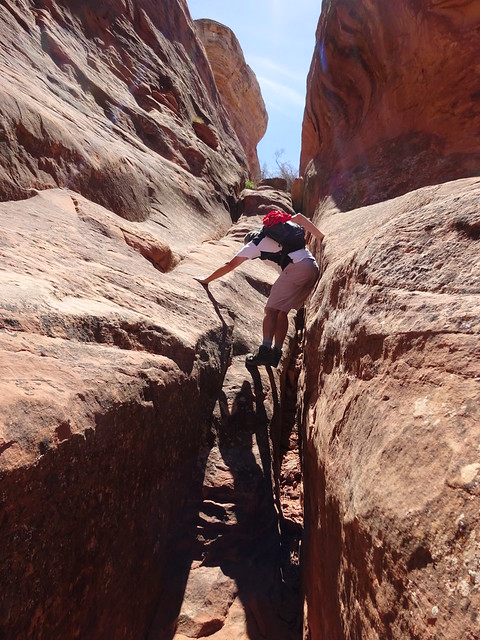 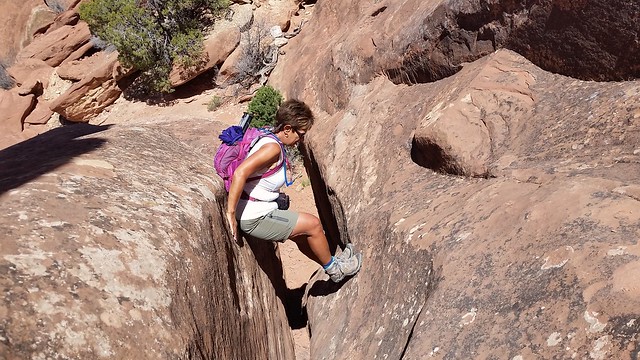 Then, we headed back down that same steep fin, mostly sliding on our butts. 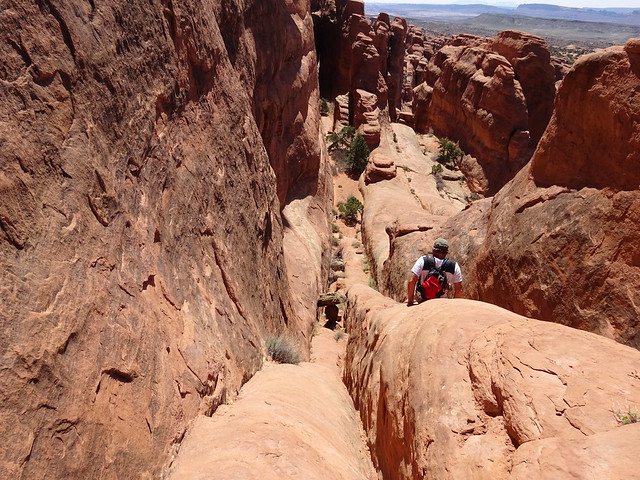 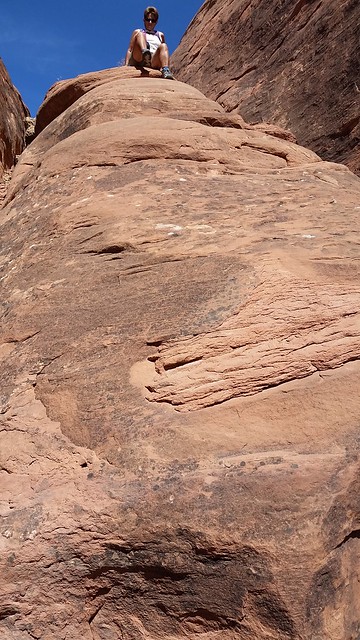 Once back down below the arch a narrow slot led us back to the trail. 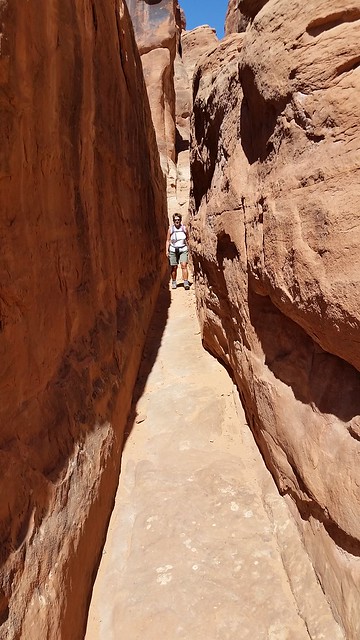 Just a short distance from the big arch is a smaller, but interesting, arch.  All the hikers we saw were so fixated on Tower Arch that they never saw this little beauty nearby. 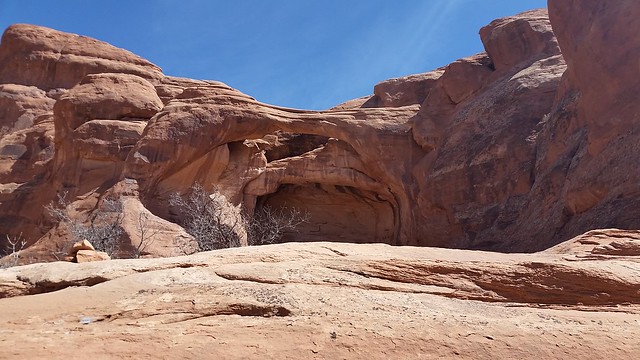 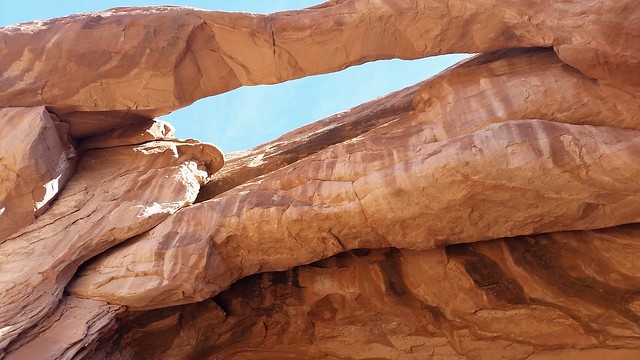 We missed the main trail coming back and had to do some bushwhacking using the backpacker app on our phone,  But we managed to get back on the trail and down to the Jeep without much difficulty.

The return drive through the park provided more scenic views. 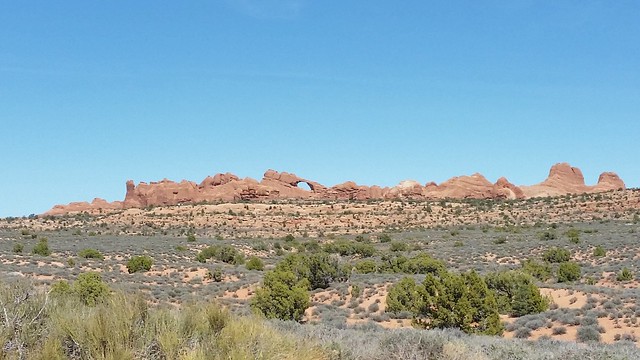 The Skyline Arch in the distance 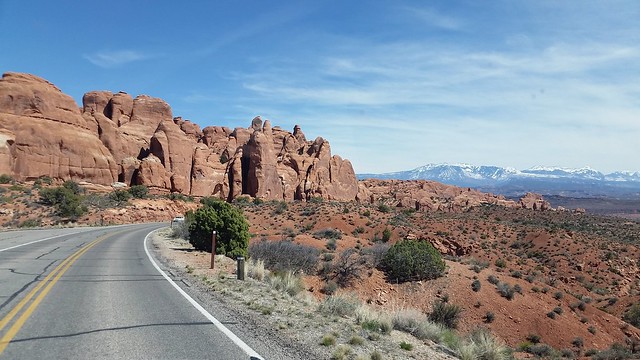 Another great adventure in the land of the red rocks!  The nimble hiker will sleep well tonight!