On Tuesday we drove almost 50 miles east to visit Hovenweep National Monument.  The monument was established in 1923 to protect five prehistoric ancestral Pueblo canyon villages located along a 16 mile stretch of land near the Colorado – Utah state line. 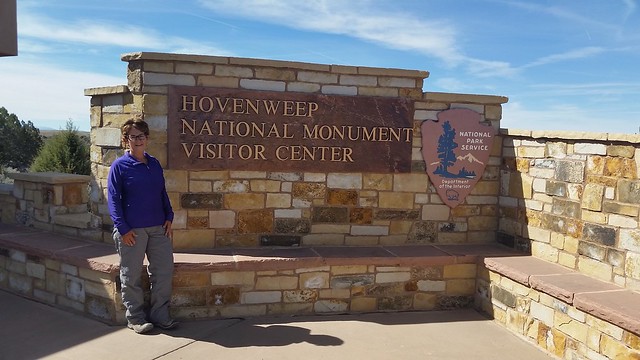 We stopped in the small visitor center to talk to a ranger and gather information for our visit.  Armed with information we set out on our first adventure, a two mile loop hike around Little Ruin Canyon, also called the Square Tower Unit, on a trail that begins right behind the visitor center. 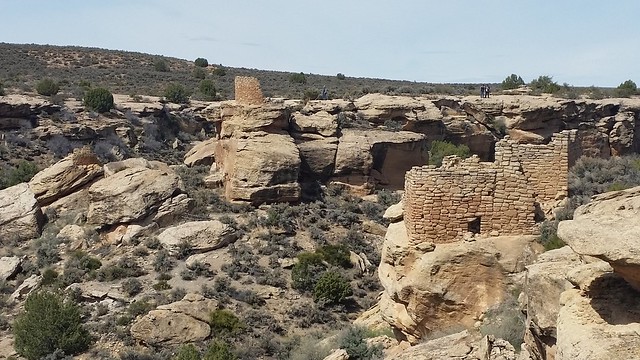 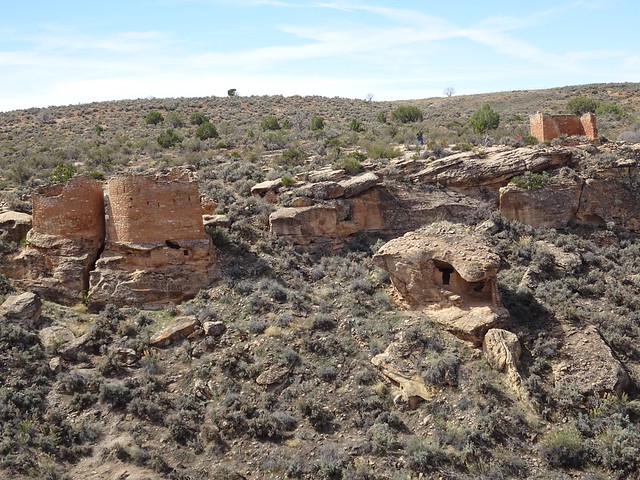 Twin Towers on the left, Eroded Boulder House down in the canyon on the right 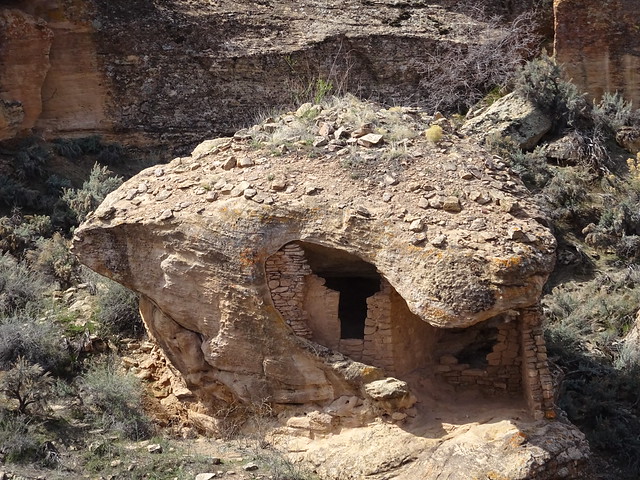 Hovenweep Castle (below) consists of two D-shaped towers perched on the rim of the canyon.  The stone walls, two and three courses thick, show detailed masonry techniques.  Growth rings on the wooden beam in one tower indicate that the log was cut in 1277, one of the latest dates on any structure in the region. 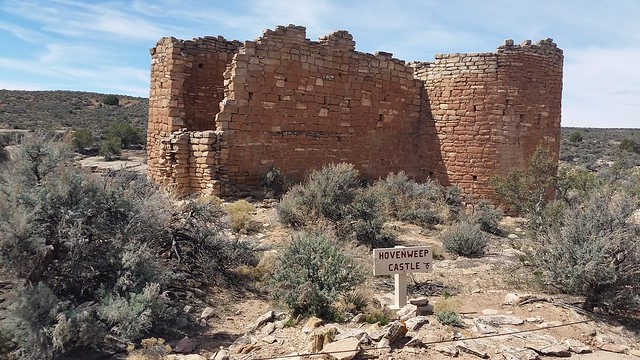 Square Tower is a two story structure situated in the canyon on a large sandstone boulder. 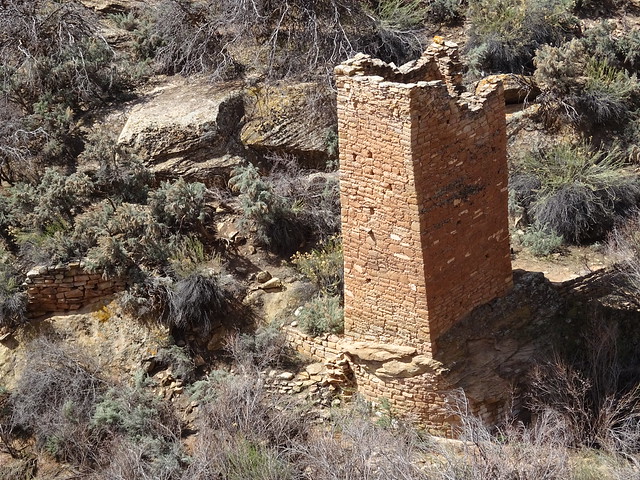 Together the Twin Towers had sixteen rooms.  The two buildings rise from the native bedrock, their walls almost touching.  One tower is oval, the other horseshoe shaped. 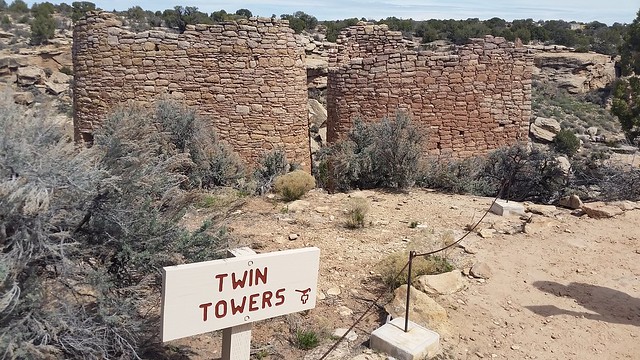 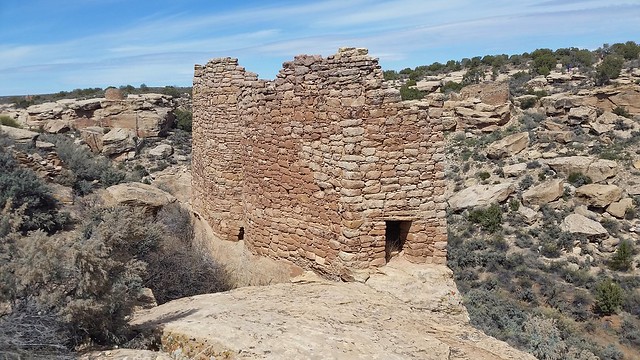 Twin Towers from the side

As we hiked the far side of the canyon the ranger we spoke with at the visitor center was coming toward us on the trail.  As we approached her she jumped, startled by something on the trail.  It turned out to be a midget-faded rattlesnake. 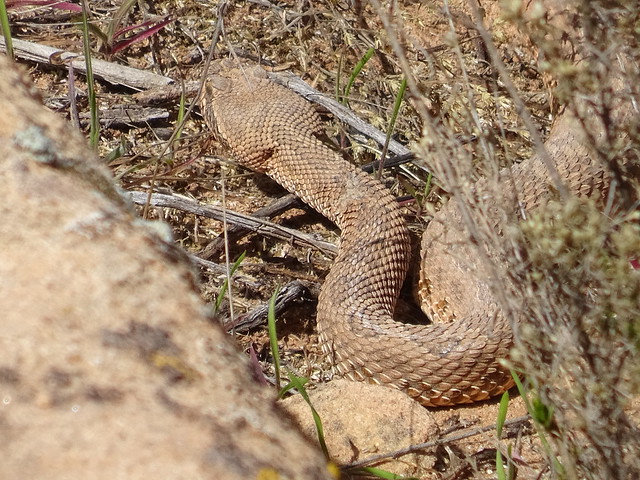 We stood quietly as the little guy slowly made his way among the rocks. 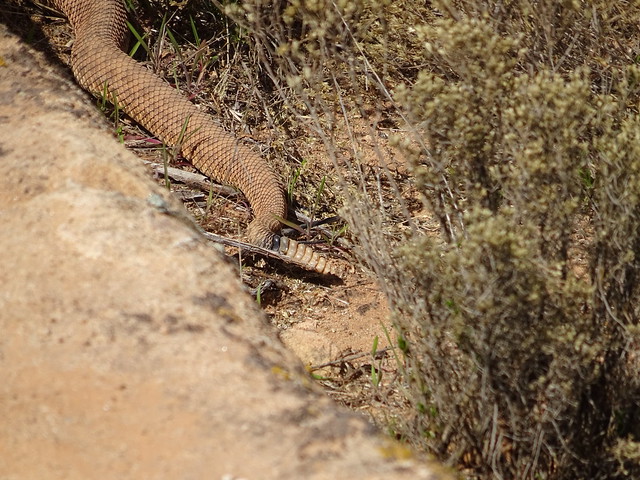 We hiked the loop trail in a counter-clockwise direction.  The trail first went around the end of the canyon but to get back to the beginning of the loop we had to hike down into the canyon and back up the other side. 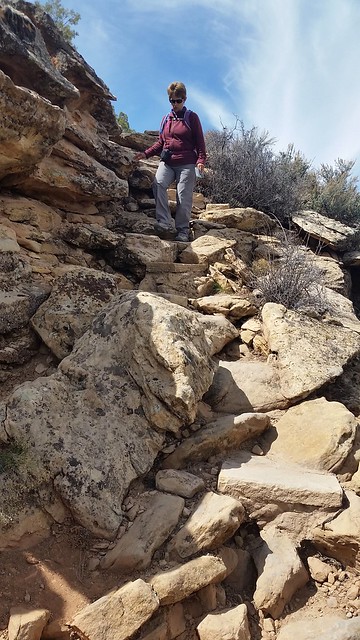 Going down into Little Ruin Canyon 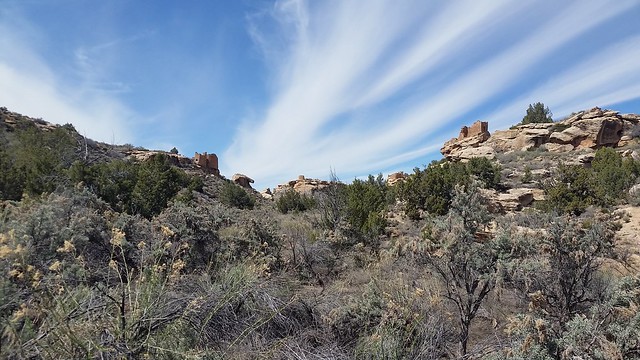 Looking back up the canyon

Once back at the visitor center we got into the Jeep and drove four miles up the main (paved) road then turned south on a narrow dirt road.  After about two miles on this road (high clearance needed) we came to a parking area for another area of the monument, the Holly group.  The five named buildings at the site are Curved Wall House, Great House, Holly Tower, Isolated Boulder House and Tilted Tower. 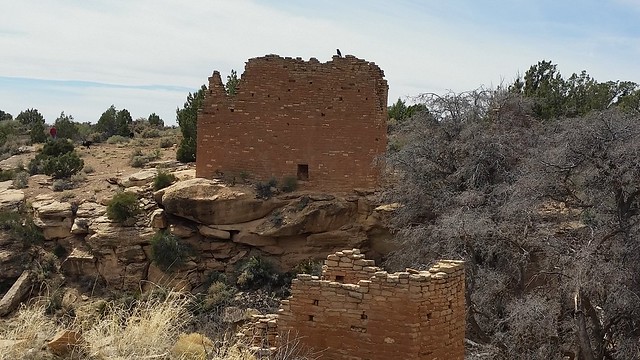 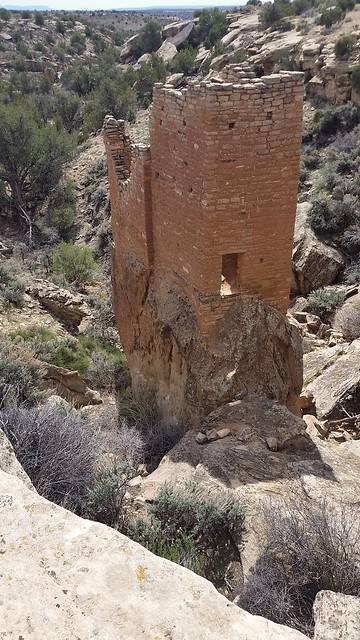 Holly Tower built right on top of a boulder 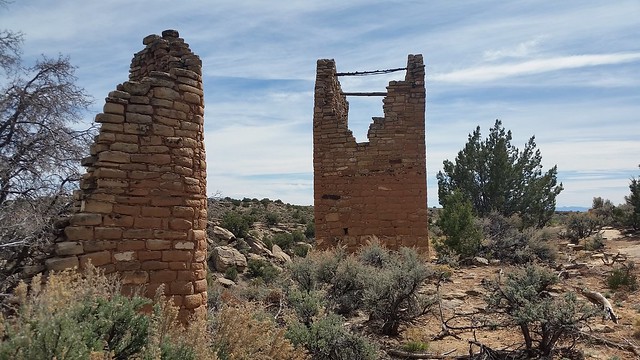 The Curved House and the Great House (with original wood beams)

While in the visitor center a volunteer told us about Lowry Pueblo located in Canyons of the Ancient National Monument, an excavated 1,000 year old Ancient Puebloan village maintained by the Bureau of Land Management (BLM).  So after exploring the Holly group we turned north and drove 20 miles through beautiful Colorado farm land.  Arriving at the pueblo we found the parking area empty so we had the place all to ourselves. 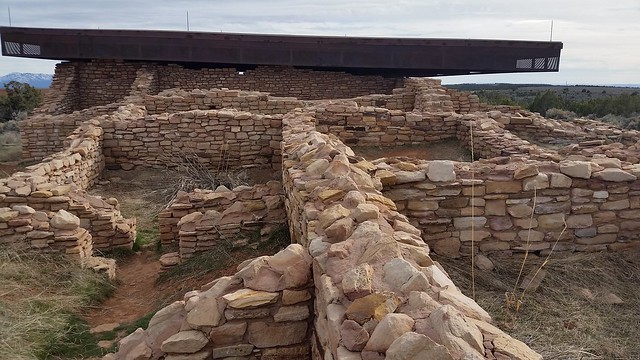 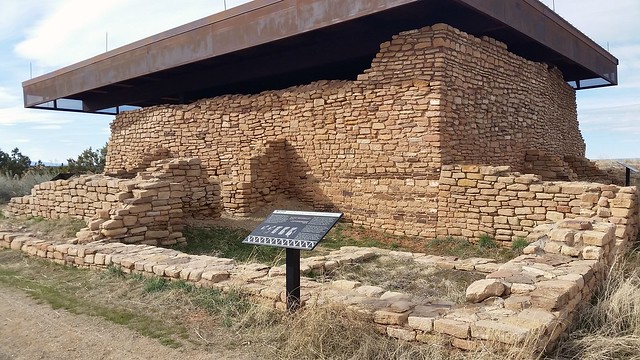 A view from the other side

The display in the above photo shows the changing floor plan as the pueblo was enlarged over the years. 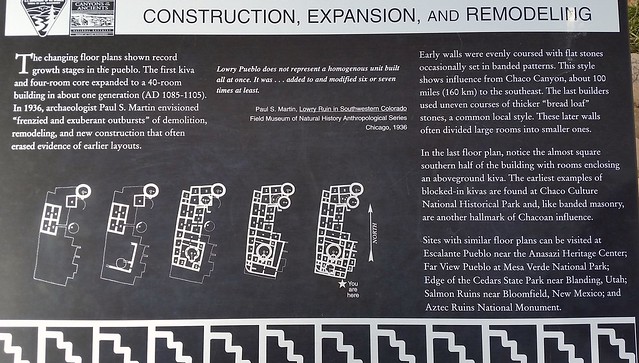 On the east side of the structure a small doorway allows visitors to  Kiva B (a chamber, built wholly or partly underground, used by male Puebloans for religious rites).  The Ancient Puebloans did not use this entrance, they entered through an opening in the ceiling and climbed down a ladder. 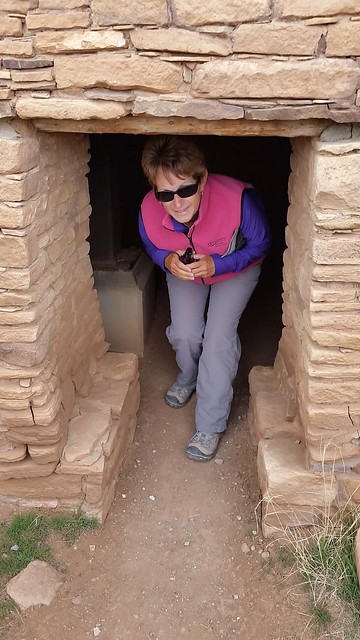 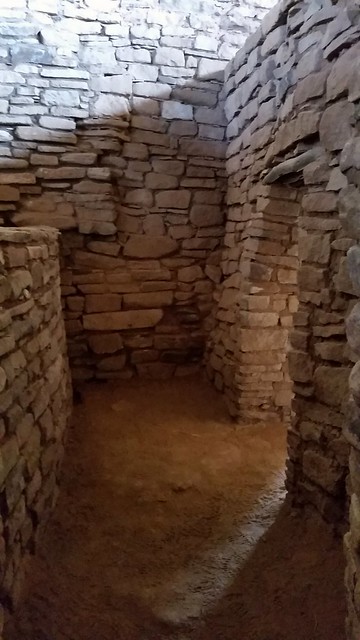 Hallway to the Kiva 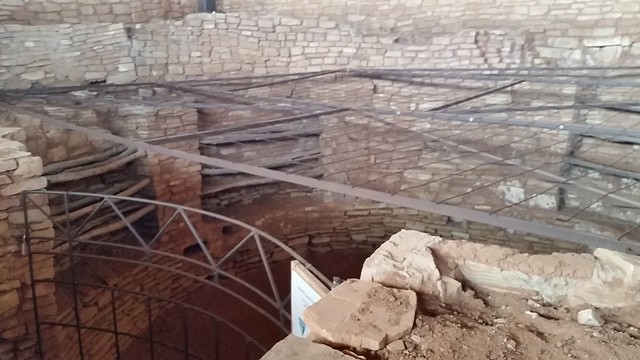 Panorama view of the Kiva

Nearby is another kiva, the Lowry Great Kiva. With a 47 foot diameter it is one of the largest found in this area. 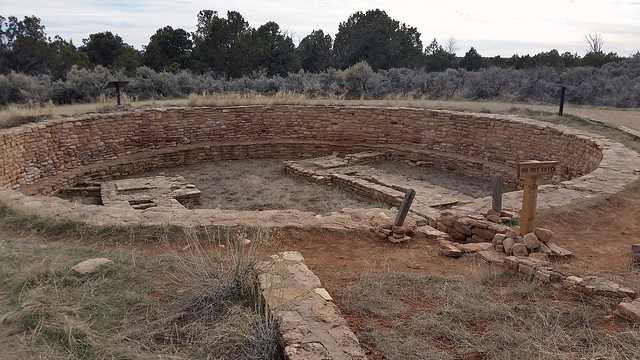 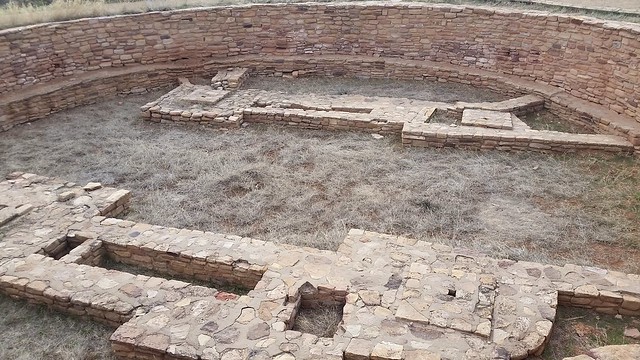 The floor of the Great Kiva

For the return ride to Bluff we drove in a large circle.  Leaving the Lowry Pueblo we drove about 8 miles east to Hwy. 491. 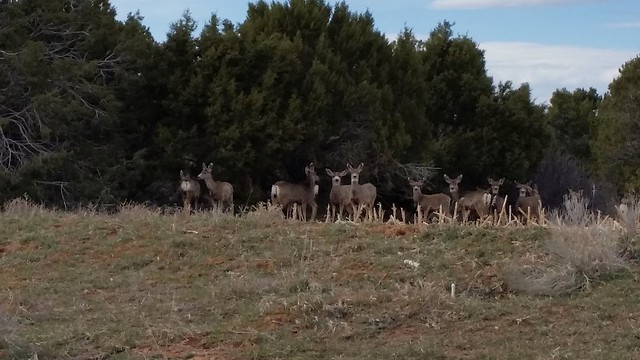 Observers near the pueblo

At Rte. 491 we turned south and drove through Cortez, CO.  As we drove through Cortez we passed a City Market (part of the Kroeger chain) and noticed a sign for a coffee shop chain based in Seattle.  We tried to drive by it but this Jeep has a mind of its own and we ended up in the parking lot.  What could we do?

South of Cortez we turned southwest on Rte. 160, then north on Rte. 162 back to Bluff.  The scenery from Cortez to Bluff is impressive. 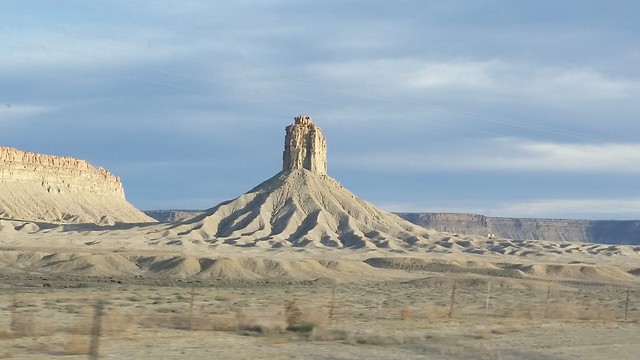 After a long day we arrived back at Bluff tired but pleased with another great adventure!