Bluff is a very small town (pop. 320) in the southeast corner of Utah.  Like most communities in Utah it was settled by members of the Church of the Latter Day Saints (Mormons).  We have visited Bluff twice before and each time we are here we learn more about the story of the first settlers, a group of about 230 Mormons on expedition to start a farming community.  The story of their crossing of the Colorado River and climbing over the nearby San Juan Hill is one of the most impressive tales of perseverance found in American history.  Last year we took our Florida friends, David and Karen, to the San Juan site.  This year we shared the experience with our current travel friends, Dave and Sue.

To get to the site we drove seven miles to the south on Rte. 163.  At the bottom of a cut through Comb Ridge we left the highway and drove about four miles east on a dusty, one lane, dirt road.  The road has many areas of deep sand that required the use of four wheel drive.  In other areas the path was very rocky  requiring a high clearance vehicle. 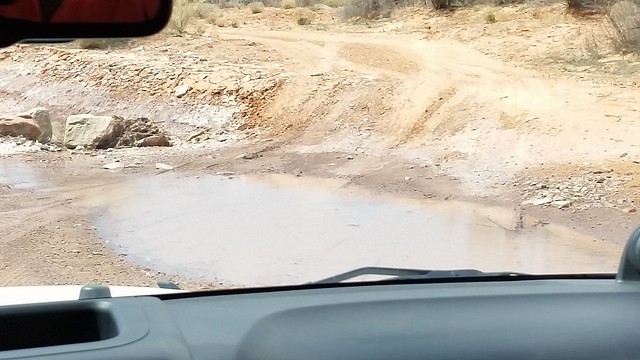 After a bumpy, dusty four miles we came to our destination.  The pioneers who made the almost impossible climb up this hill named it San Juan Hill.  Looking at the photo below, the pioneers drove their wagons on to the rocks right up to the blue arrow.  They then turned right and went diagonally up to the red arrow. 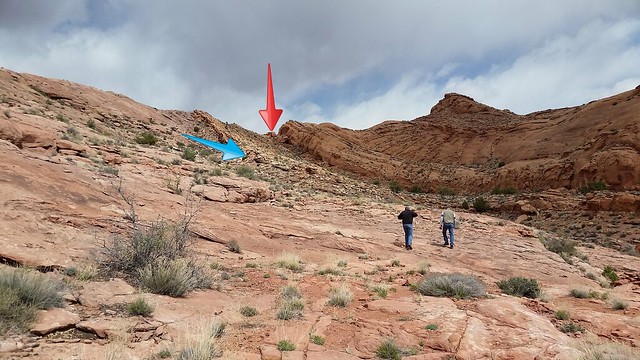 In many places you can still see the marks in rocks left by the wheels of the wagons. 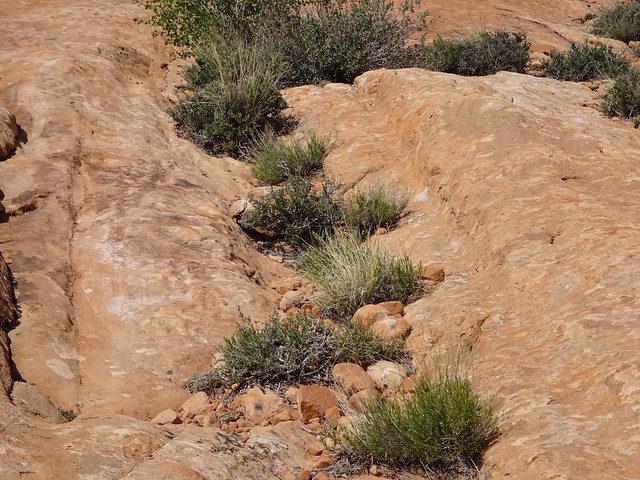 Once back at the Jeep we continued on the dirt road another mile or so for a visit to the River House Ruins.  The stone dwellings were occupied by Ancestral Puebloans between 900 and the late 1200s. 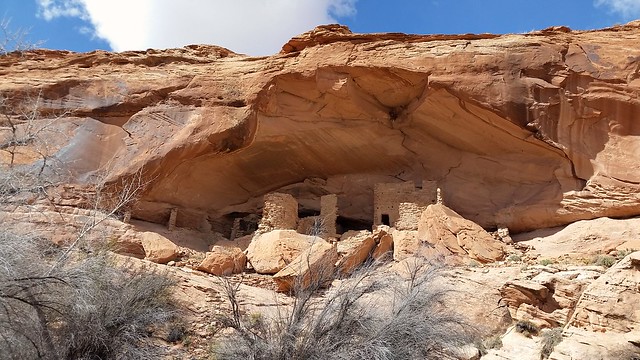 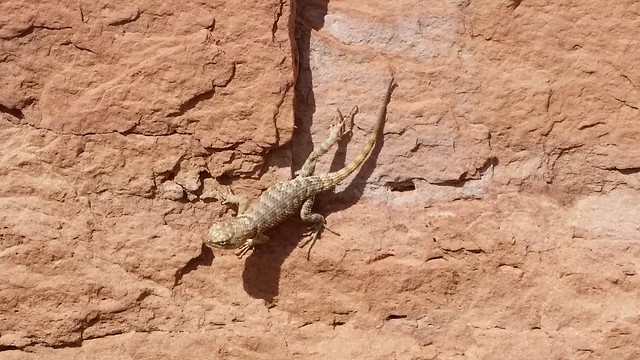 This little guy was difficult to spot on the rocks

Like many historical sites in the area there is an old metal ammunition box that contains information about the ruins.  Inside there is a picture of the River House taken in 1913. 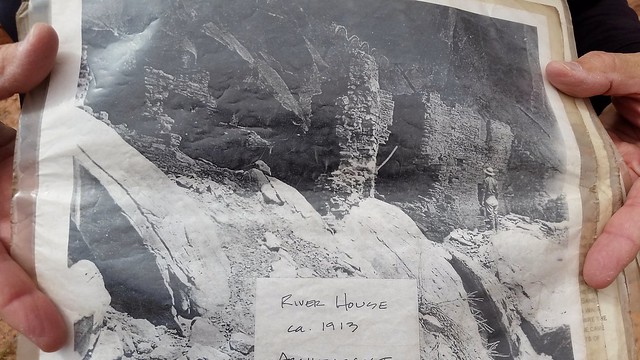 Compare the photo above to the one below.  The ruins appear to be in almost the same condition today as they were a hundred years ago. 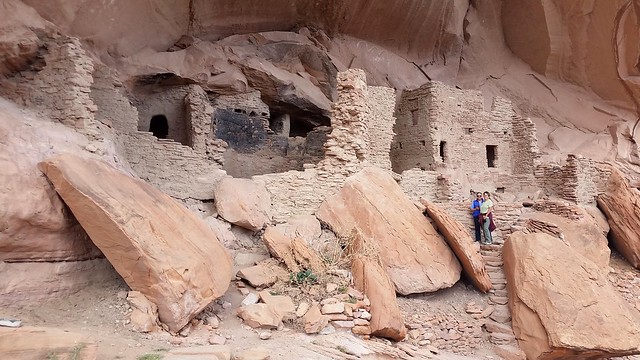 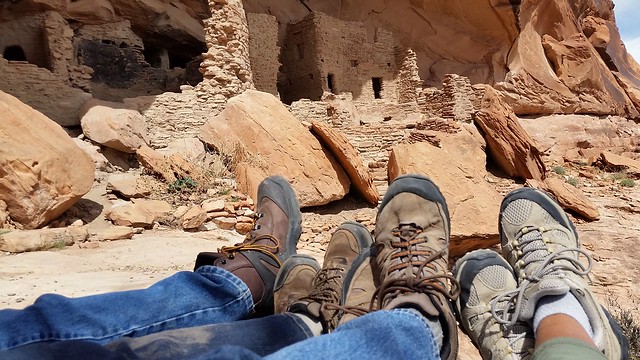 The walls near the ruins have many examples of ancient artwork. 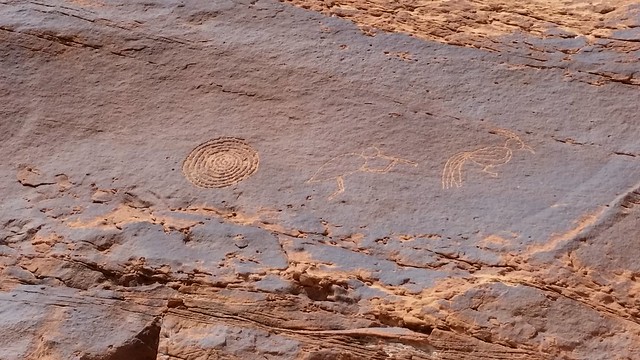 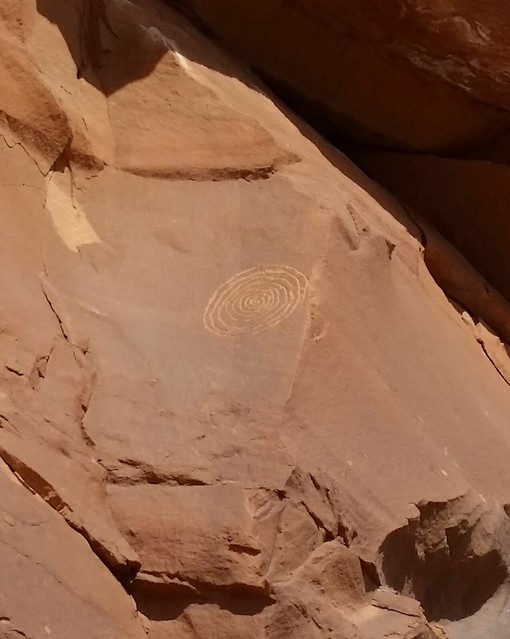 As we visited the remains of an old trading post on the drive back along the San Juan River, we enjoyed watching a group of rafters floating along with the current. 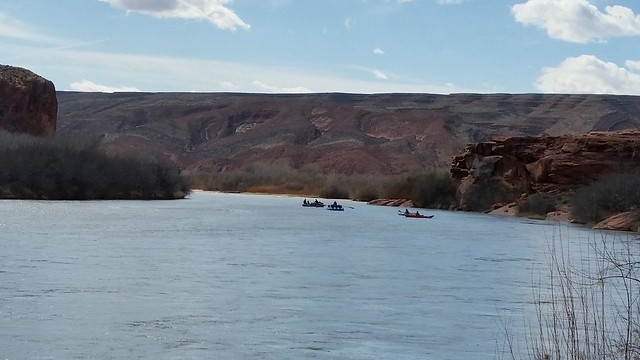 Back at the motorhome we enjoyed happy hour with Dave and Sue.  While we chatted Dave enjoyed the company of his lap dog, Lewis. 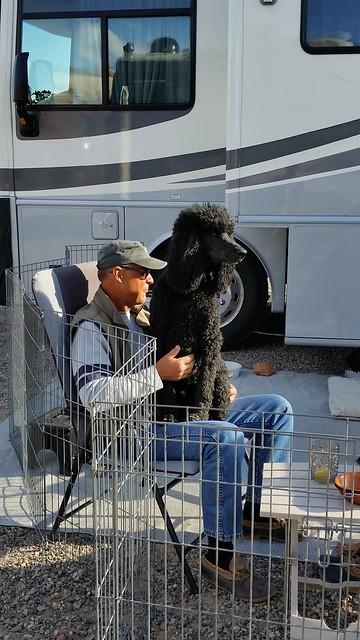 The area around Bluff is filled with Pueblo ruins we plan to explore.  More on that later . . .

47 Responses to San Juan Hill and the River House Ruins